The Next Loudspeaker Superpower?

The dismal economy has hurt the specialty-audio business. Bringing any new product to market these days is risky, even for established brands, and most would agree that starting a new company at this time is next to impossible. But don’t tell that to Sandy Gross, one of the driving forces behind GoldenEar Technology, a brand-new company that made its debut at CEDIA Expo 2010 with several new products.

Sandy Gross isn’t new to the audio business, nor is he naïve. Gross helped to cofound Polk Audio in the 1970s, and then he and Don Givogue went on to cofound Definitive Technology in 1990. Both companies became speaker-making powerhouses. Gross and Givogue are the founders of GoldenEar Technology.

When Gross’s name comes up, most people I know will say this: "He understands the market well." He certainly does and even competitors will concede that. Polk Audio and Definitive Technology were both huge successes due in large part to them producing products that consumers wanted. If GoldenEar Technology succeeds, which I think they probably will, it won’t only be because Gross and Givogue are involved. Instead, it will have mostly to do with the products they’re producing.

GoldenEar hasn’t shipped a thing yet; they showed only pre-production models at CEDIA Expo. The real stuff will come in October and November. But what they have planned seems impressive and will give them a good start. Right now they’re planning to produce two powered subwoofers (Forcefield 3 and Forcefield 4), two satellite-type speakers (SuperSat 50 and SuperSat 3), and one full-range floorstanding speaker (Triton Two). They all have innovative technology and have beautiful styling reminiscent of previous-generation Definitive Technology designs, but with some modern touches that sets them apart. Of all the models, it’s the Triton Two that sells for $2500/pair that audiophiles are likely going to be most interested in, so it’s the one I focussed on during the company’s demonstration at CEDIA and that I’m writing about here.

The Triton Two is GoldenEar’s most expensive loudspeaker, at least right now. It’s a three-way design with a ribbon tweeter flanked above and below by two 4.5" drivers. The mid- and high-frequency drivers are augmented in the low end by a DSP-controlled active bass section that has two 5" x 9" woofers and two 7" x 10" passive radiators. There are more features than that, but that gives you the gist of the design. 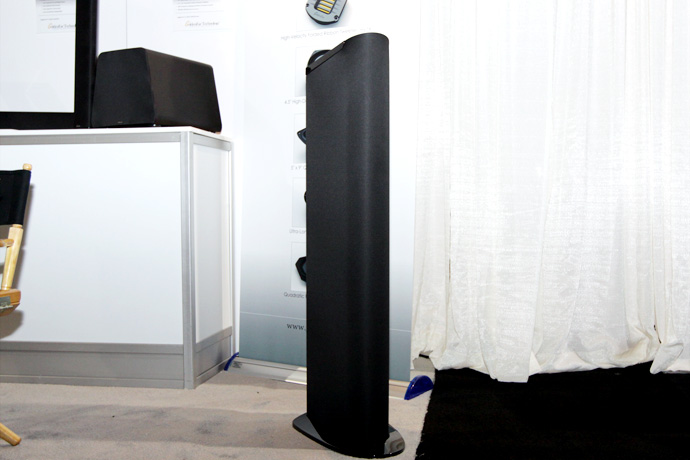 To help cut costs to keep the speaker price affordable, the bulk of the cabinet is black-cloth concealing an MDF box that houses all those drivers -- that’s far less costly than to do than a fancy paint job or a real-wood veneer. A high-gloss top cap and bottom plate give the speaker some pizzazz. This isn’t unlike the original Definitive Technology models, nor is it unlike the original Mirage M-series that were released in the ‘80s that had the same kind of look. This time, though, Gross and Givogue have given their speakers more shape than those original Def Tech and Mirage models had. The front is narrower and taller than the back, something that enhances the look and makes the Two look sleeker than if it was typical box design. But the real nice touch is the sharply curved grille that caps the flat front baffle and helps make the Two look more like a work of industrial art than simply a loudspeaker. Frankly, I’ve seen speakers multiples of the price that don’t look as nice. 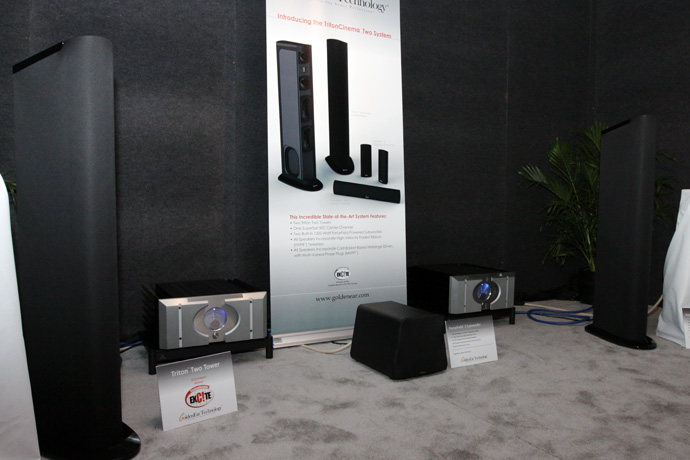 I’ve also heard speakers many times the price that don’t sound as good as what these did at CEDIA Expo. I have to temper my enthusiasm here because what I heard were pre-production models and, obviously, built to perfection to guarantee a good showing here. But if the production models match their performance, and I can’t see why they shouldn’t, buyers will be rewarded with an exceptionally refined-sounding loudspeaker with performance that exceeds the price.

The Triton Twos I heard had super-clean and effortless highs, a robust and detailed midrange, and bass that not only sounded powerful but extremely deep. GoldenEar claims extension below 20Hz and I believe them. They threw a huge soundstage in what was decidely a very mediocre sound room (that's just the way it is at shows), and they sounded pretty much the same when I went away from the sweet spot in the center and off to the side in order to take a picture. While I sat in the listening room I couldn’t help but think: I would like to have a pair of these for the way they look and sound. I know that my wife would love them too. I also couldn’t help but wonder how a pair of these would stack up against some of the ultra-expensive speaker models from the boutique brands that oftentimes exhibit substandard peformance, at least in comparison to the their astronomical asking prices. At 2500 bucks per pair, the Triton Two has the makings of being a giant-killer.

Introducing a new product in this economy is tough, and starting a new speaker brand is, for most, financial suicide. But Gross and Givogue have decades of experience in the speaker business and, I suspect, they know exactly what they’re getting into. They also seem to have a great product line, the most important thing to making them a success, so they have reason to be confident.