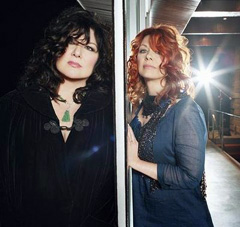 For their first new album since 2004's Jupiter's Darling, Heart's Ann and Nancy Wilson, often described as the first ladies of arena rock, have taken an acoustic approach to a collection of songs inspired by the world around them, arranged for an assortment of string instruments, including guitar, mandolin, dobro, banjo, fiddle, viola, cello and autoharp, all played by Nancy Wilson and the album's producer, Grammy winner Ben Mink.

Nine of the album's songs were written for and appear for the first time on Red Velvet Car. The album's closer, "Sand," is a newly recorded version of a song originally written and recorded by the Lovemongers, the Wilson’s 1990s all-acoustic side project.

"This album feels so right for the times," says Nancy Wilson. "We can't wait to share this one with the world!"

Heart will be performing songs from Red Velvet Car, as well as classics from the band's repertoire, in headline concerts across the U.S. and Canada from July through September.