I measured the Focal Utopia 2022 headphones using laboratory-grade equipment: a GRAS Model 43AG ear/cheek simulator/RA0402 ear simulator with KB5000/KB5001 simulated pinnae, and a Clio 10 FW audio analyzer. For isolation measurements, I used a laptop computer running TrueRTA software with an M-Audio MobilePre USB audio interface. The headphones were amplified using a Musical Fidelity V-CAN. These are “flat” measurements; no diffuse-field or free-field compensation curve was employed. If you’d like to learn more about what our measurements mean, click here. 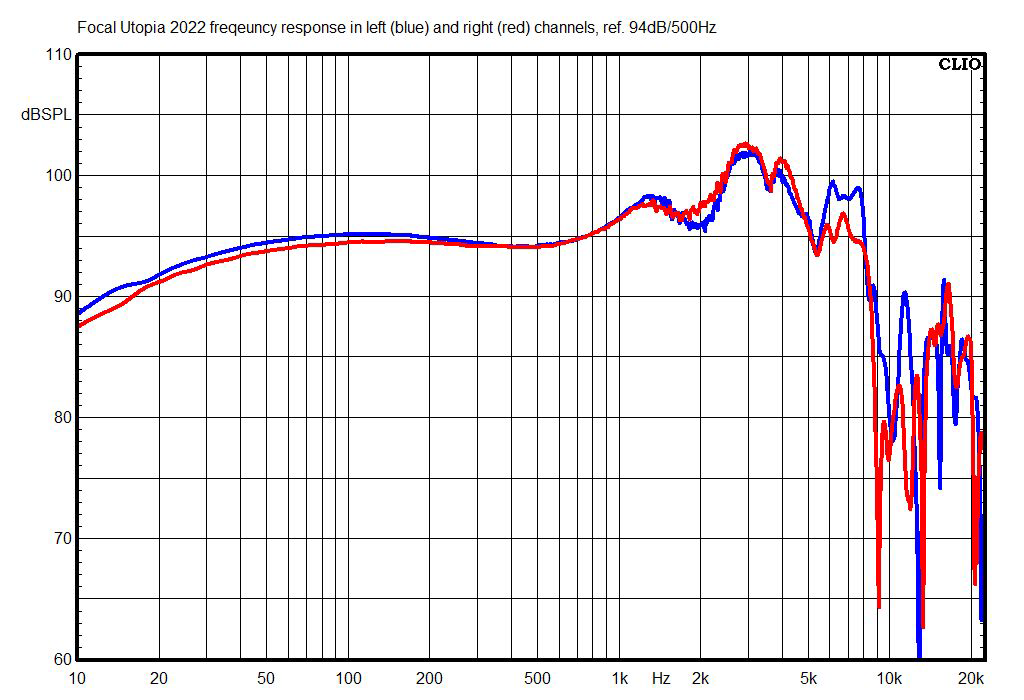 The above chart shows the Utopia 2022s’ frequency response. This is fairly ordinary for audiophile headphones, but for two anomalies. First, that unusual little peak at about 1.4kHz, (also seen in the original Utopias), which will likely add a slight emphasis in the upper midrange. Second, the low energy above 8kHz, which isn’t surprising after hearing how the Utopia 2022s seem to damp extreme high-frequency sounds. 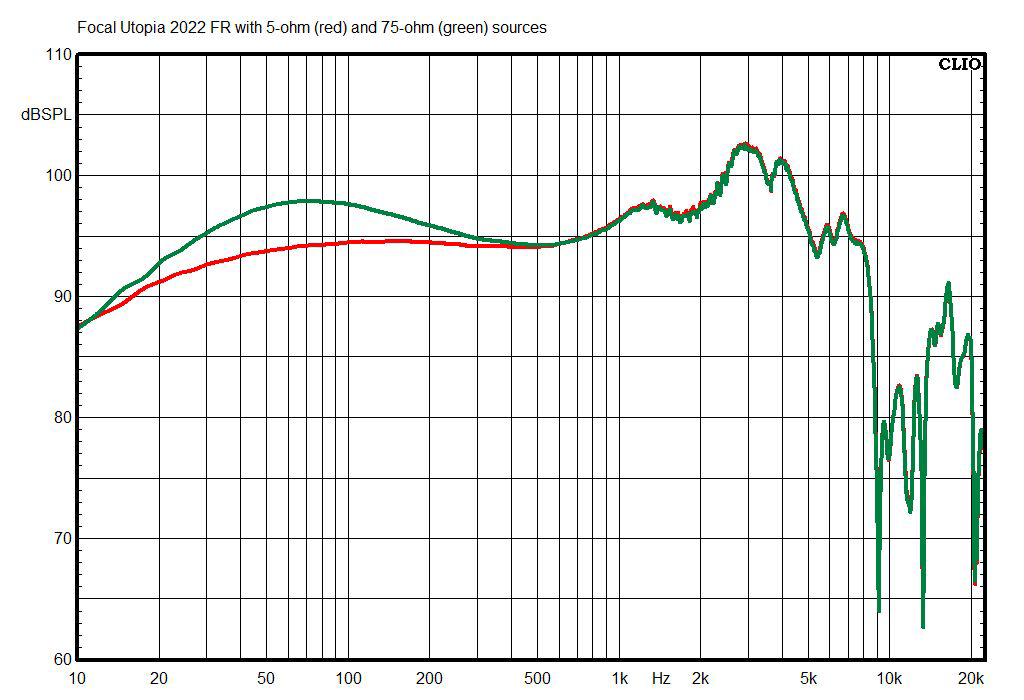 This chart shows how the Utopia 2022s’ tonal balance changes when they’re used with a high-impedance (75 ohms) source, such as a cheap laptop or some cheap professional headphone amps, or some tube amps. There’s a substantial bass boost with the high-impedance source—about +3.5dB, centered at about 65Hz—so these may get bassier when used with an amp that has a tube output stage. 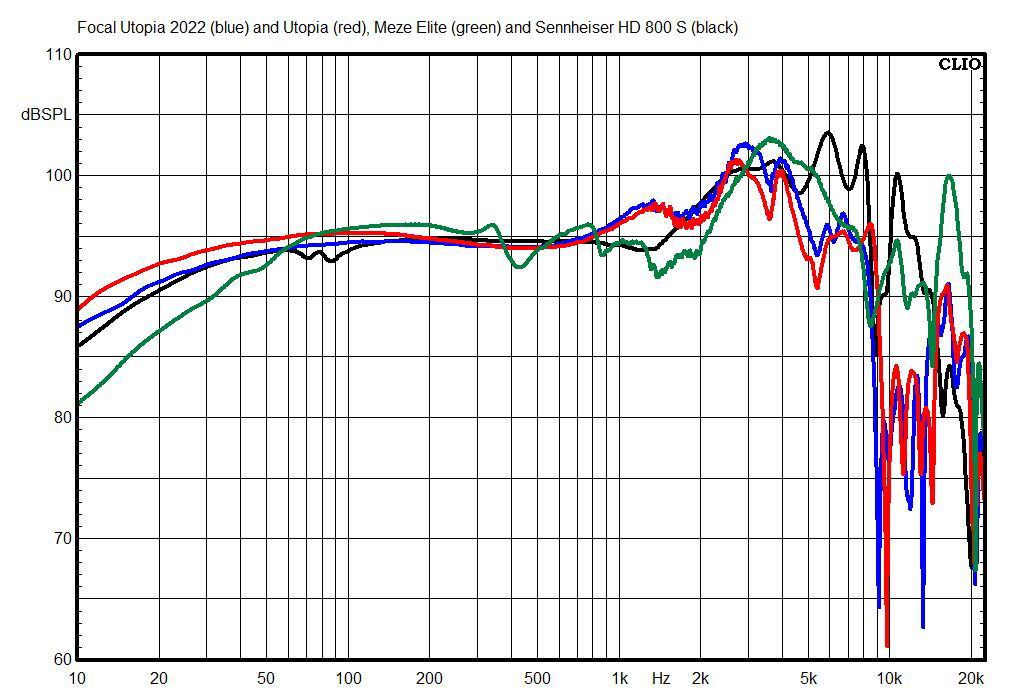 This chart shows the Utopia 2022s’ right-channel response compared with the original Utopias and two other well-regarded high-end models: the Meze Elites (used with the supplied Alcantara earpads) and the Sennheiser HD 800 S headphones. You can see how the Meze and Sennheiser models have more energy in the top octave-and-a-half. 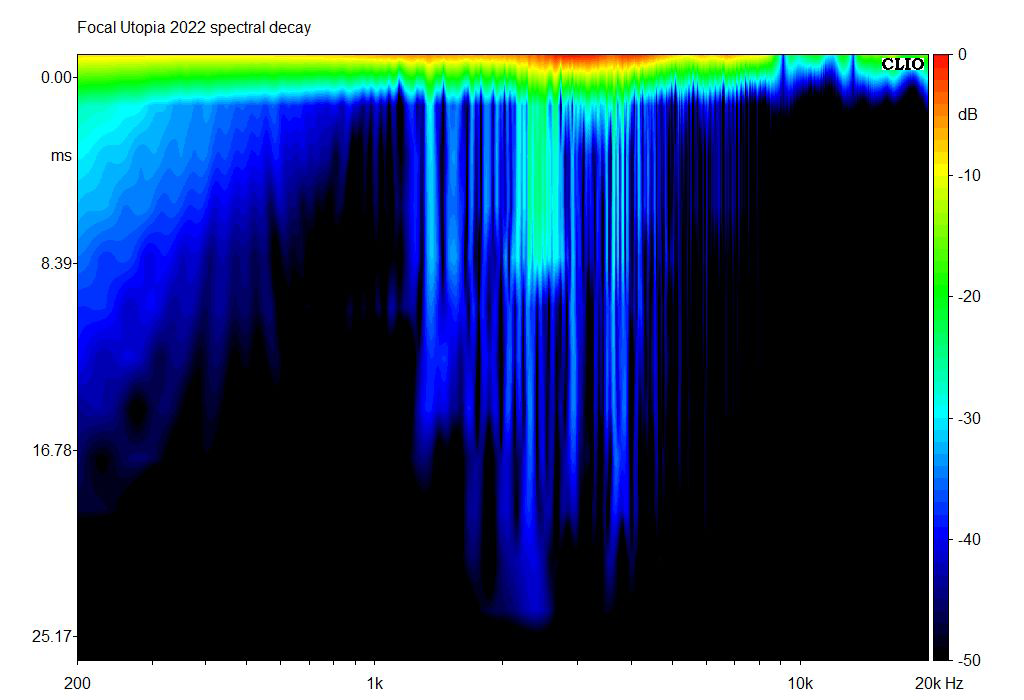 Just as with the original Utopias, the Utopia 2022s’ spectral-decay plot looks like the plots I see with planar-magnetic headphones, with a lot of very high-Q resonances between about 1 and 5kHz. That’s weird because planar drivers are flat, but the Utopia 2022s’ drivers are M-shaped. I associate these resonances with a nice sense of space, rather than an audible coloration, but to my knowledge, there’s no science on that—although a famous audio scientist was the one who gave me the idea. 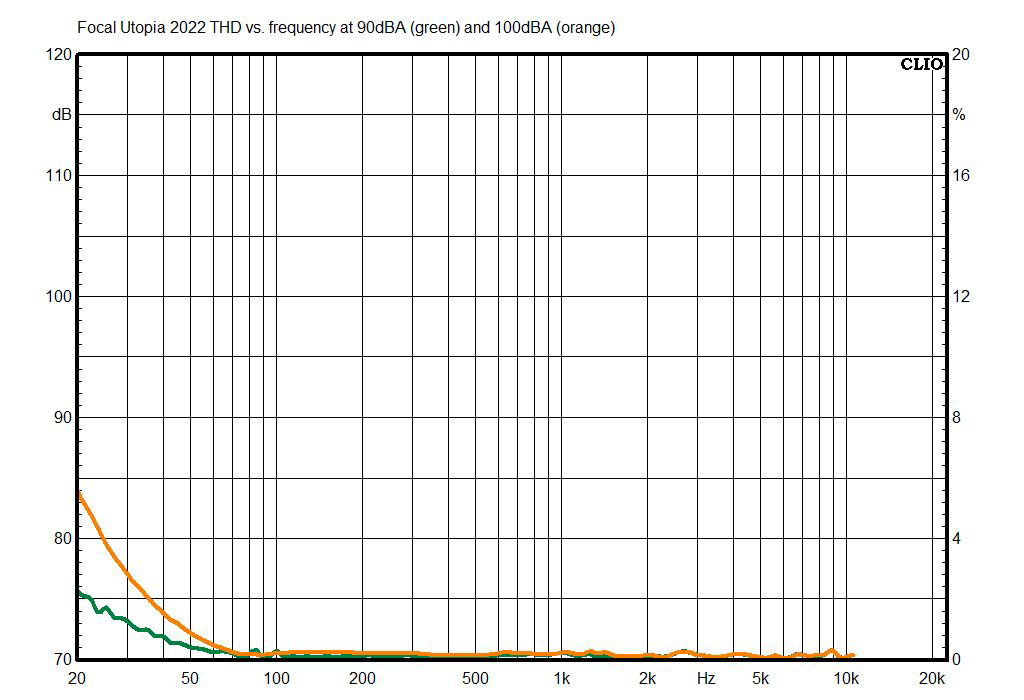 There’s a little bit of distortion in the deep bass with the Utopia 2022s at very high levels, but you’ll never hear it because the distortion harmonics are still well below the most sensitive range of human hearing. 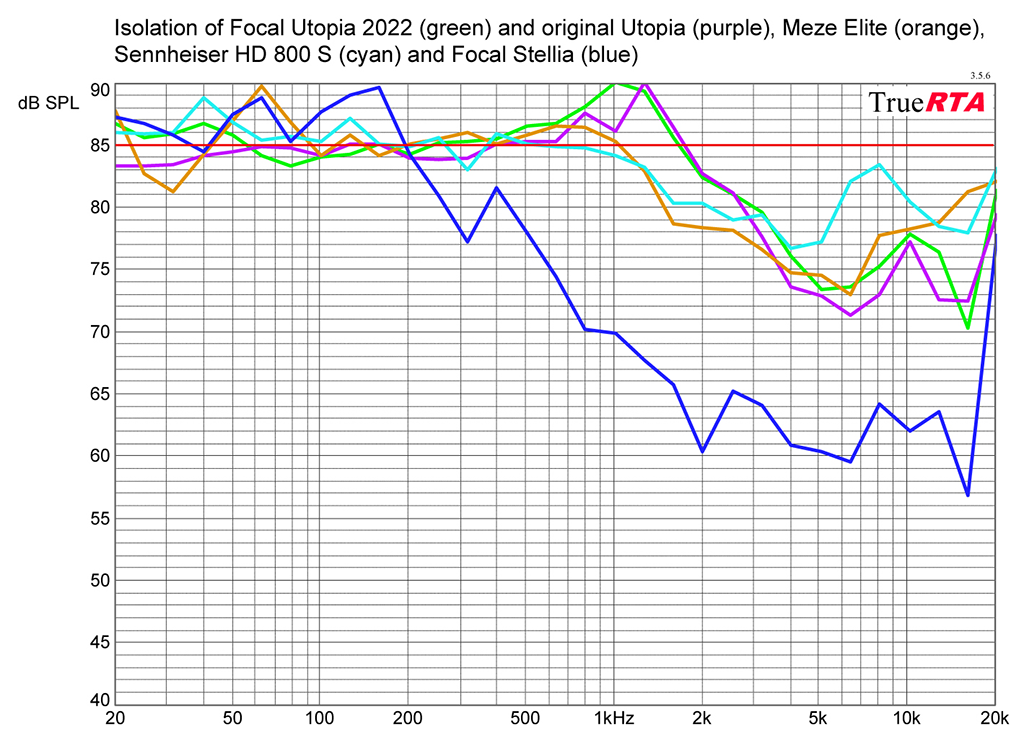 In this chart, the external noise level is 85dB SPL, and numbers below that indicate the degree of attenuation of outside sounds. The lower the lines, the better the isolation. The isolation of the Utopia 2022s, like that of most open-back headphones, is negligible. I added the original Utopias so you could see the effects of the changes in the outer grille (it does look like the new one is somewhat more transparent at high frequencies), and the Focal Stellias so you can see how a closed-back model compares. 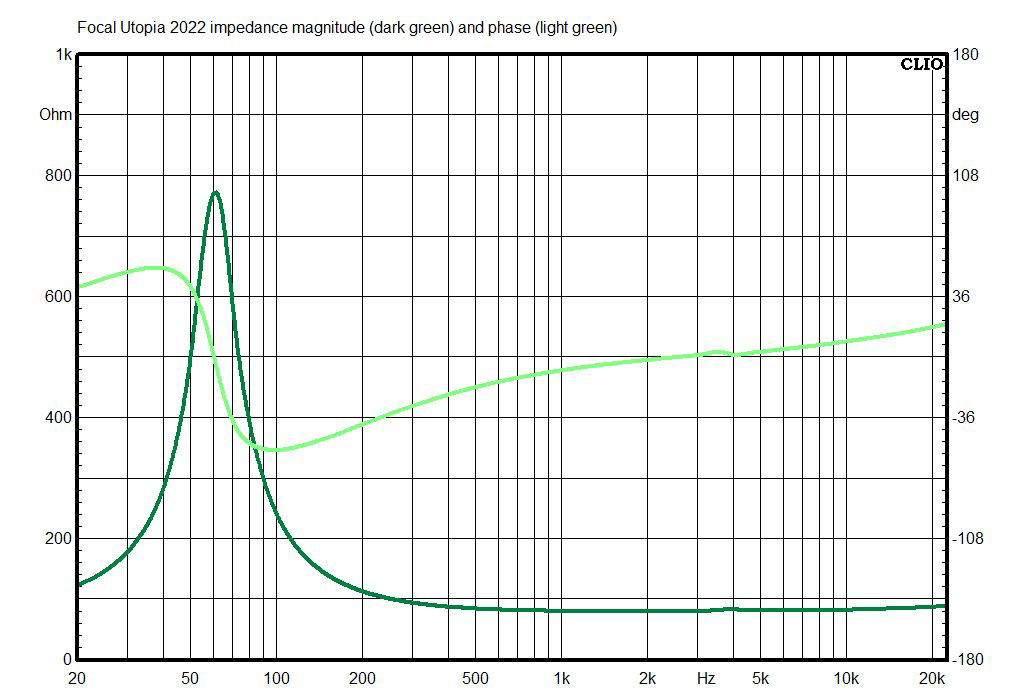 The Utopia 2022s’ impedance is mostly flat at the rated 80 ohms for about 6.5 octaves, but then it takes a huge swing up to 770 ohms at 52Hz—which shows there’s been a change in the voice coil, because the old model rose only to 655 ohms. There’s also a big phase swing in the bass, corresponding with the impedance peak. This is why these headphones will sound different with high-impedance sources.

Sensitivity of the Utopia 2022s, measured between 300Hz and 3kHz, using a 1mW signal calculated for 80 ohms rated impedance, is 105.6dB—exactly the same as the original model, and no problem for any source device to drive.

Bottom line: There are a couple of unusual frequency-response characteristics with the Utopia 2022s, and definitely not a strong upper-treble response, but the engineering otherwise seems solid, with particular praise for the sensitivity, which is way high for high-end headphones.