Link: reviewed by James Hale on SoundStage! Xperience on January 1, 2023

The DB12 AAAMP offers one unbalanced input (1/8″ male TRS) and one unbalanced output (1/8″ female TRS). There is a volume control, but it does not control the amplifier gain or provide onboard attenuation; rather, it sends volume control signals to the source device (e.g., smartphone). There is also a Bass+ (Bass Boost) switch. Unless otherwise stated, measurements were made with the Bass+ switch disabled, the DB12 fully charged but unplugged from the USB charging port, with a 2Vrms output into a 300-ohm load.

One noteworthy attribute of the DB12 AAAMP is that if the unit is off (or the battery were to die), signals are passed through at unity gain.

The table below summarizes the measurements published by Helm Audio for the DB12 AAAMP compared directly against our own. The published specifications are sourced from Helm Audio’s website, either directly or from the manual available for download, or a combination thereof. With the exception of frequency response, where the Audio Precision bandwidth is set at its maximum (DC to 1MHz), assume, unless otherwise stated, a 1kHz sine wave, 0.5Vrms input, and 2Vrms output into a 300-ohm load, 10Hz to 90kHz bandwidth, and the worst-case measured result between the left and right channels. 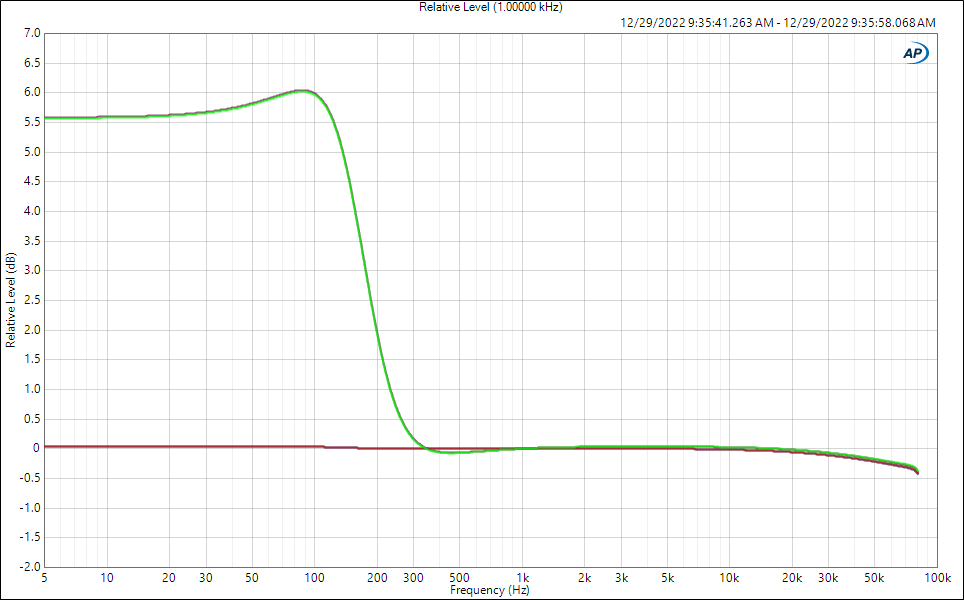 In our measured frequency-response plots above, the blue/red traces are with the Bass+ (Bass Boost) function disengaged, while the purple and green represent the responses with the bass-boost engaged. The DB12 is essentially perfectly flat within the audioband, into a 300-ohm load. Worst-case deviations are +/- 0.03dB. The DB12 also appears to be DC coupled, as it is ruler flat down to 5Hz. The DB12 also offers an extended bandwidth, only down about 0.4dB at 80kHz. With Bass Boost engaged, there’s a +5.5 to 6dB bump in the response between 5Hz and 100Hz. In the graph above and most of the graphs below, only a single trace may be visible. This is because the left channel (blue, purple or pink trace) is performing identically to the right channel (red, green or orange trace), and so they perfectly overlap, indicating that the two channels are ideally matched. 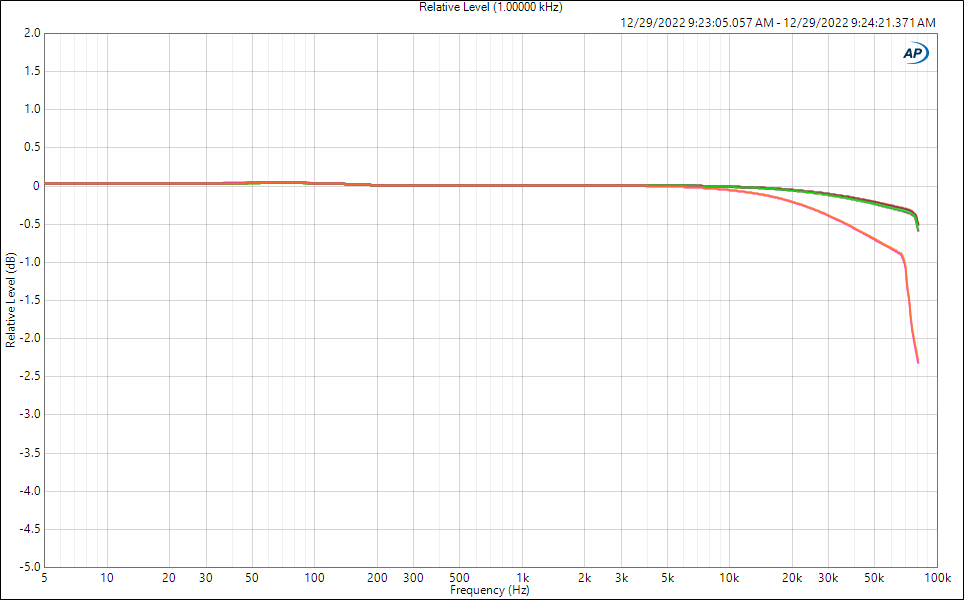 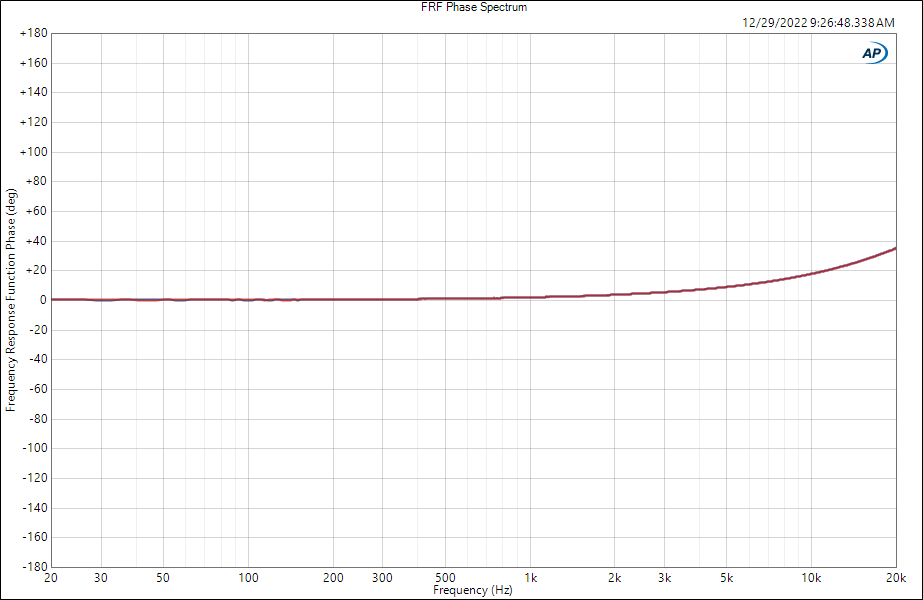 Above is the phase response plot from 20Hz to 20kHz. The DB12 AAAMP does not invert polarity, and yielded a worst-case 40 degrees or so of phase shift at 20kHz. 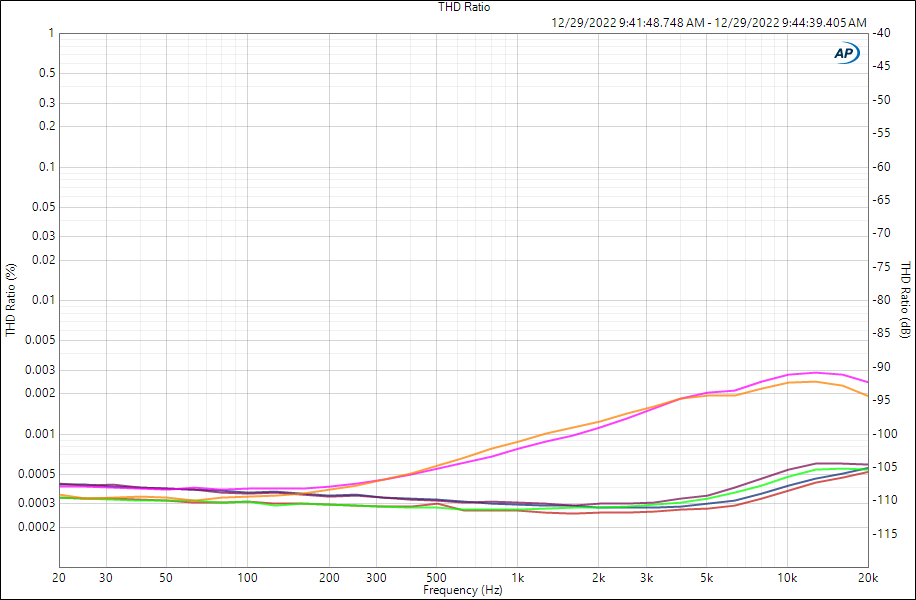 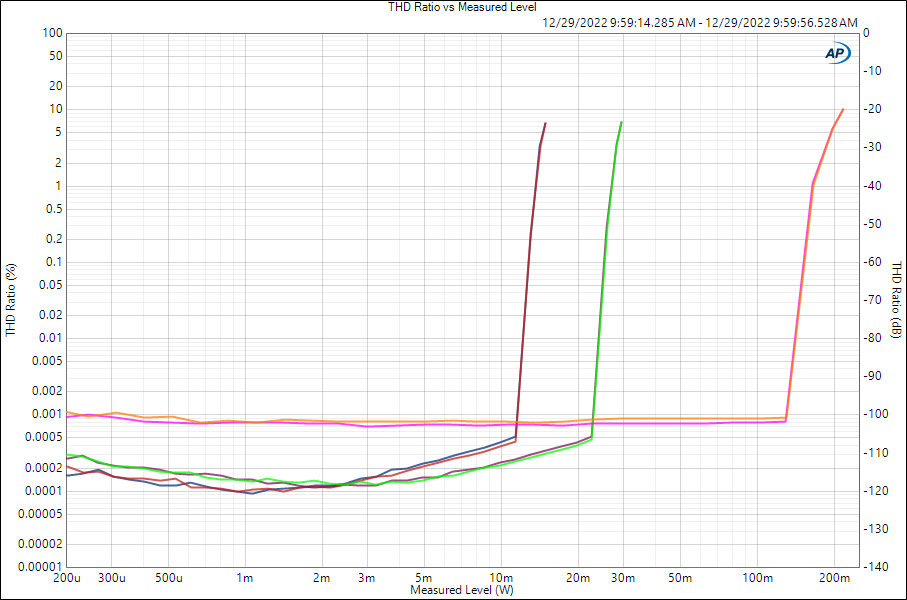 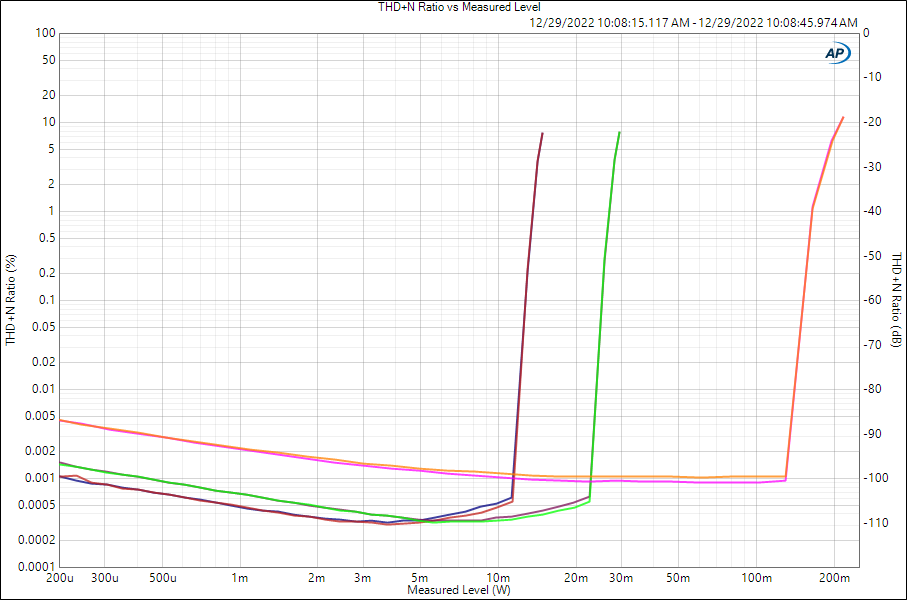 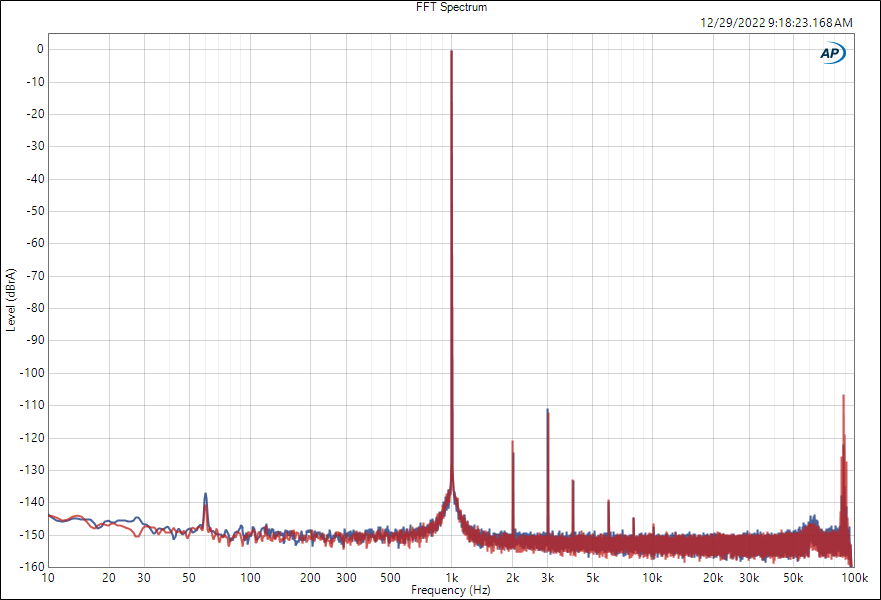 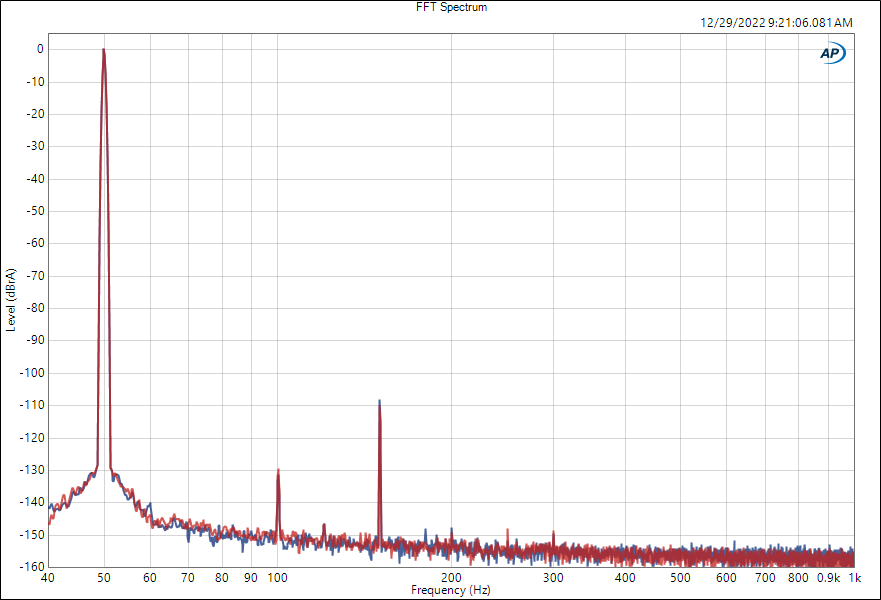 Shown above is the FFT for a 50Hz input sine-wave stimulus measured at the output into a 300-ohm load. The X axis is zoomed in from 40Hz to 1kHz, so that peaks from noise artifacts can be directly compared against peaks from the harmonics of the signal. The most predominant non-signal peak is from the signal’s third harmonic (3kHz) at -110dBrA, or 0.0003%. The second signal harmonic (100Hz) is at -130dBrA, or 0.00003%. There are no visible power-supply-related noise peaks. 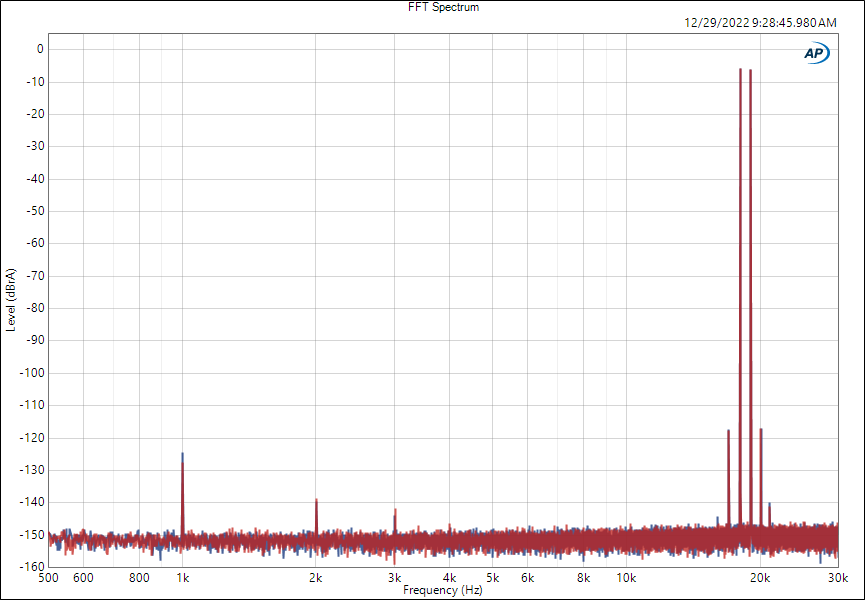 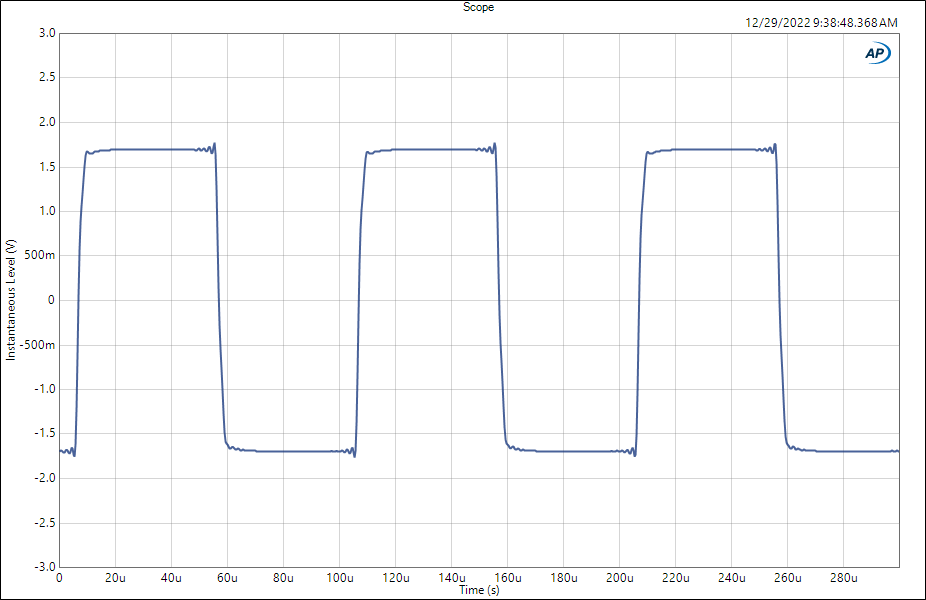 Above is the 10kHz squarewave response at the output into 300 ohms. Due to limitations inherent to the Audio Precision APx555 B Series analyzer, this graph should not be used to infer or extrapolate the DB12’s slew-rate performance. Rather, it should be seen as a qualitative representation of its relatively high bandwidth. An ideal squarewave can be represented as the sum of a sine wave and an infinite series of its odd-order harmonics (e.g., 10kHz + 30kHz + 50kHz + 70kHz . . .). A limited bandwidth will show only the sum of the lower-order harmonics, which may result in noticeable undershoot and/or overshoot, and softening of the edges. The DB12’s reproduction of the 10kHz squarewave is clean, with only mild ringing in the corners.