Link: reviewed by Jason Thorpe on SoundStage! Hi-Fi on January 1, 2023

The P30A offers three sets of line-level unbalanced (RCA) inputs, two sets of line-level balanced (XLR) inputs, two sets of unbalanced outputs, and one set of balanced outputs. There’s no difference in terms of gain between unbalanced and balanced inputs/outputs. That is to say, if the volume is set to unity gain, an input of 2Vrms will yield 2Vrms at the output, regardless of the input and output type configuration (i.e., all of these configurations yield the same results in terms of gain: RCA in/XLR out, XLR in/RCA out, RCA in/RCA out, XLR in/XLR out). The volume control does not have a numerical display. Based on the accuracy and non-repeatable nature of the channel deviation (table below), the volume control is digitally controlled but passes the signal in the analog domain. It offers between 8dB and 2dB increments for the first eight volume steps. Beyond the eighth step to just below the 12 o’clock position, 1dB steps were measured. Beyond the 12 o’clock position, the volume control offers 0.5 dB steps. Overall gain was measured at -85dB for volume step one, up to +5.3dB at the maximum position.

As Hegel claims, there is a difference in terms of THD between unbalanced and balanced signals in the P30A (see both the main table and FFTs below). We found that the difference lies in whether the unbalanced or balanced inputs (not outputs) are used—the unbalanced inputs yielded a little over twice as much THD at 1kHz. Unless otherwise stated, measurements were made with the volume set to unity gain, using the XLR inputs and outputs, with a 2Vrms input.

The table below summarizes the measurements published by Hegel for the P30A compared directly against our own. The published specifications are sourced from Hegel’s website, either directly or from the manual available for download, or a combination thereof. With the exception of frequency response, where the Audio Precision bandwidth is set at its maximum (DC to 1MHz), assume, unless otherwise stated, a 1kHz sine wave, 2Vrms input and output into 200k-ohm load, 10Hz to 90kHz bandwidth, and the worst-case measured result between the left and right channels. 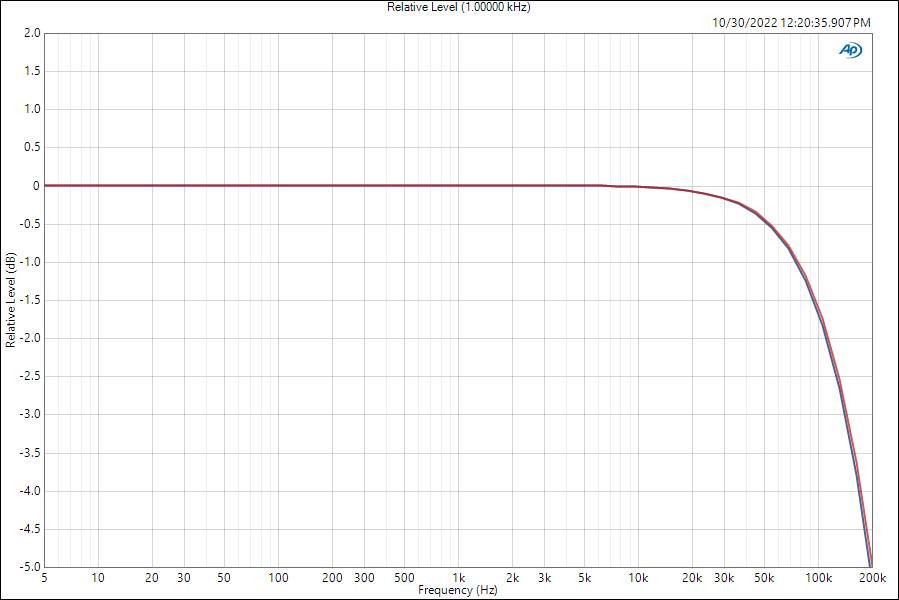 In our measured frequency-response plot above, the P30A is essentially perfectly flat within the audioband (0dB at 20Hz, less than -0.1dB at 20kHz). The P30A appears to be DC-coupled, as it yielded 0dB of deviation at 5Hz. In the graph above and most of the graphs below, only a single trace may be visible. This is because the left channel (blue or purple trace) is performing identically to the right channel (red or green trace), and so they perfectly overlap, indicating that the two channels are ideally matched. 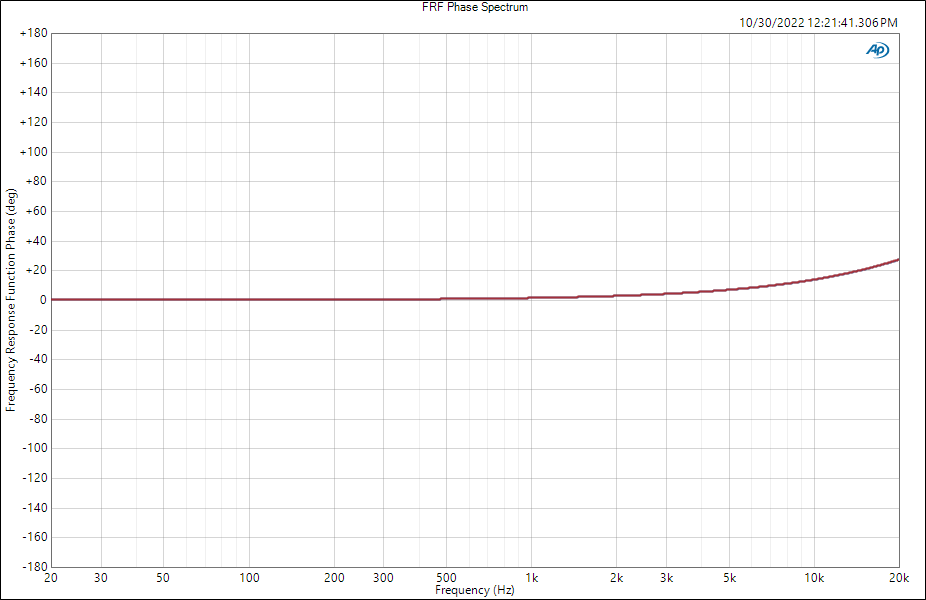 Above is the phase response plot from 20Hz to 20kHz. The P30A does not invert polarity, and yielded a worst-case 25 degrees or so of phase shift at 20kHz. 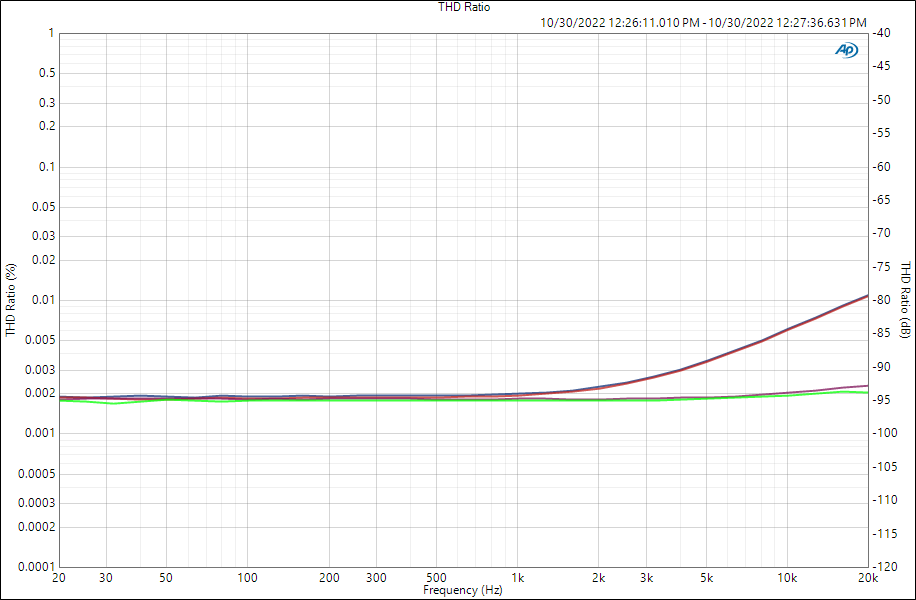 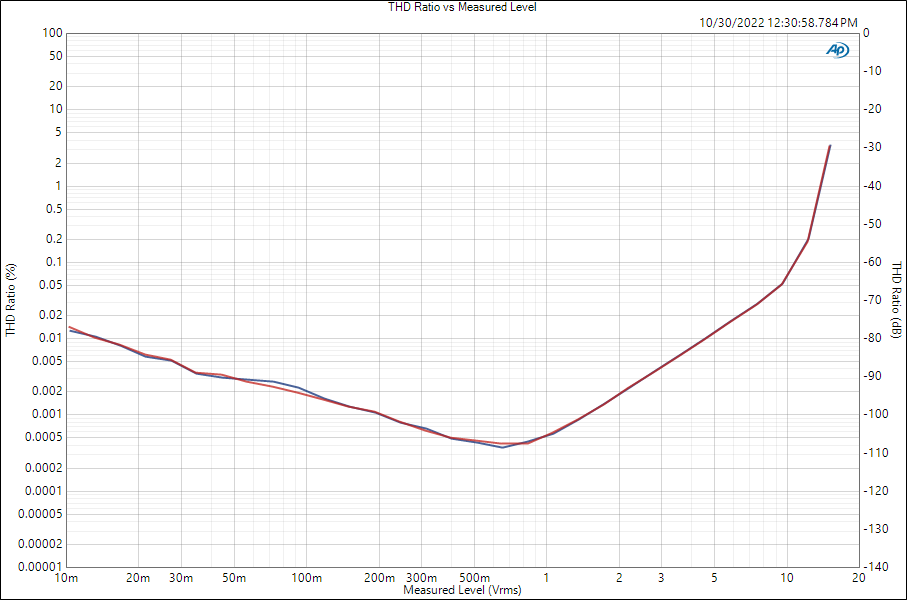 The plot above shows THD ratios measured at the output of the P30A as a function of output voltage into 200k ohms with a 1kHz input sine wave. At the 10mVrms level, THD values measured around 0.01%, dipping down to around 0.0005% at 0.6-0.7Vrms, followed by a rise to 0.05% at 10Vrms. The 1% THD point is reached at 14Vrms. It’s also important to mention that anything above 2-4Vrms is not typically required to drive most power amps to full power. 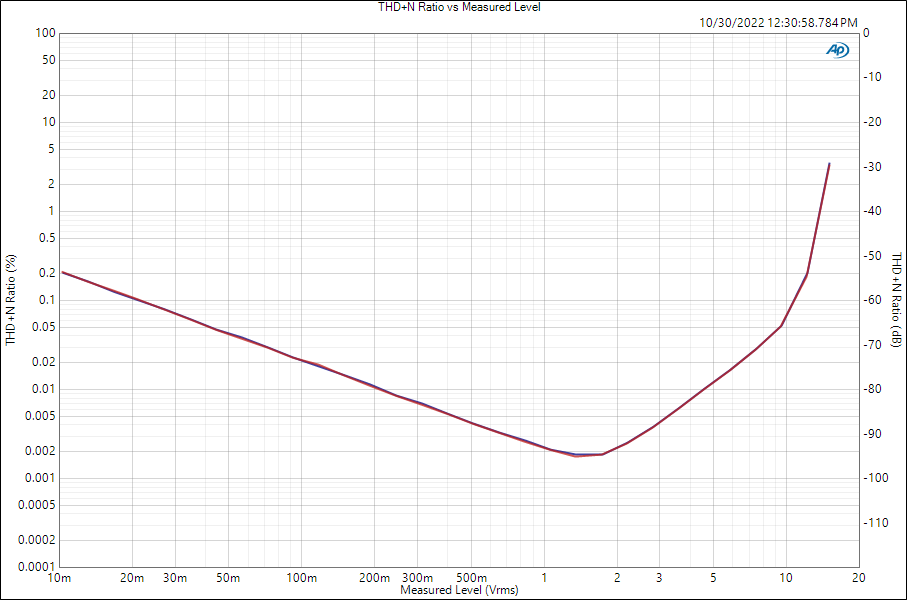 The plot above shows THD+N ratios measured at the output of the P30A as a function of output voltage into 200k ohms with a 1kHz input sine wave. At the 10mVrms level, THD+N values measured around 0.2%, dipping down to around 0.002% at 1.5Vrms. 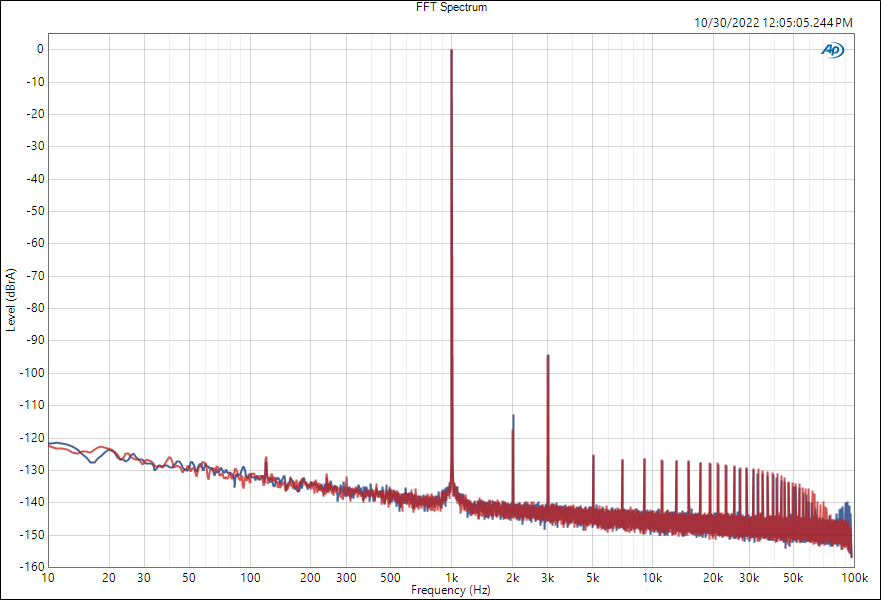 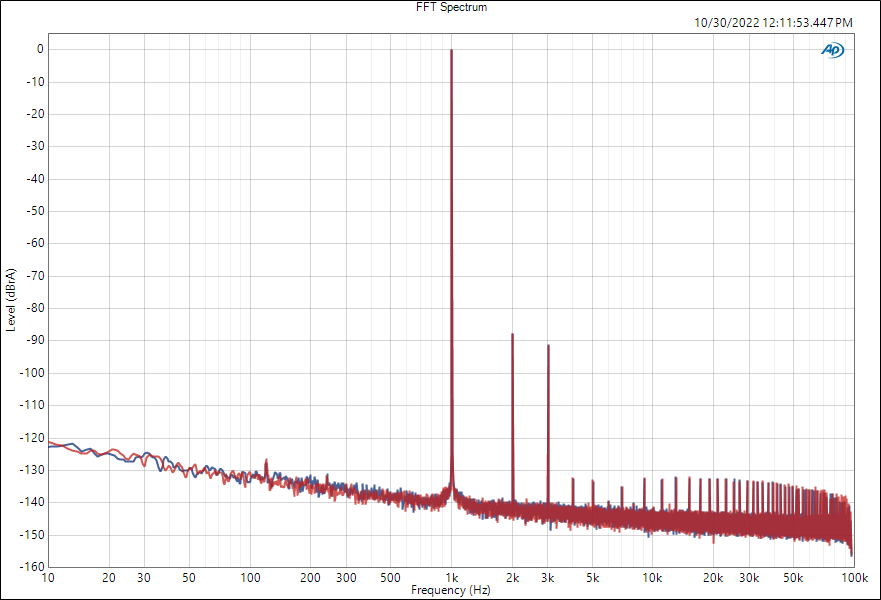 Shown above is the fast Fourier transform (FFT) for a 1kHz input sine-wave stimulus, measured at the output into a 200k-ohm load for the unbalanced inputs and balanced outputs. The main difference here compared to the FFT above is the much higher second signal harmonic, at -90dBRa, or 0.003%, versus the -115dBrA 2kHz peak seen when the balanced inputs are used.

Shown above is the fast Fourier transform (FFT) for a 1kHz input sine-wave stimulus, measured at the output into a 200k-ohm load for the unbalanced inputs and outputs. The same distortion profile with the higher 2kHz peaks can be seen here as with the FFT above. The common denominator is the use of the unbalanced inputs. 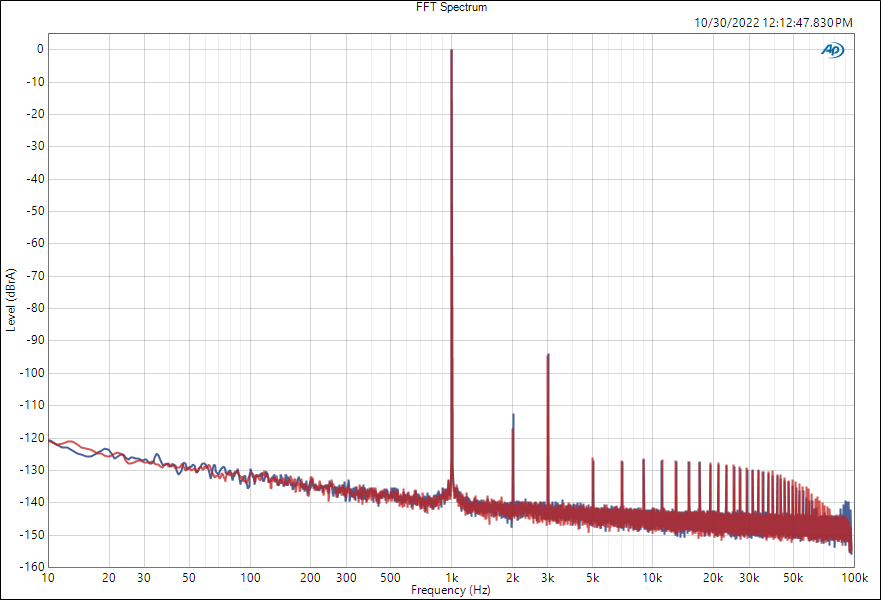 Shown above is the fast Fourier transform (FFT) for a 1kHz input sine-wave stimulus, measured at the output into a 200k-ohm load for the balanced inputs and unbalanced outputs. The same distortion profile with the lower 2kHz peaks can be seen here as with the first FFT above. The common denominator is the use of the balanced inputs. 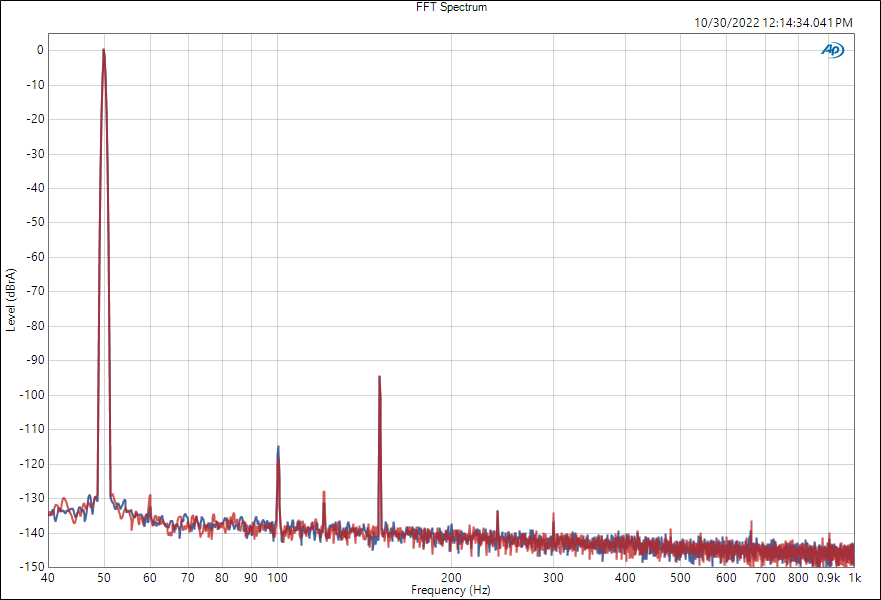 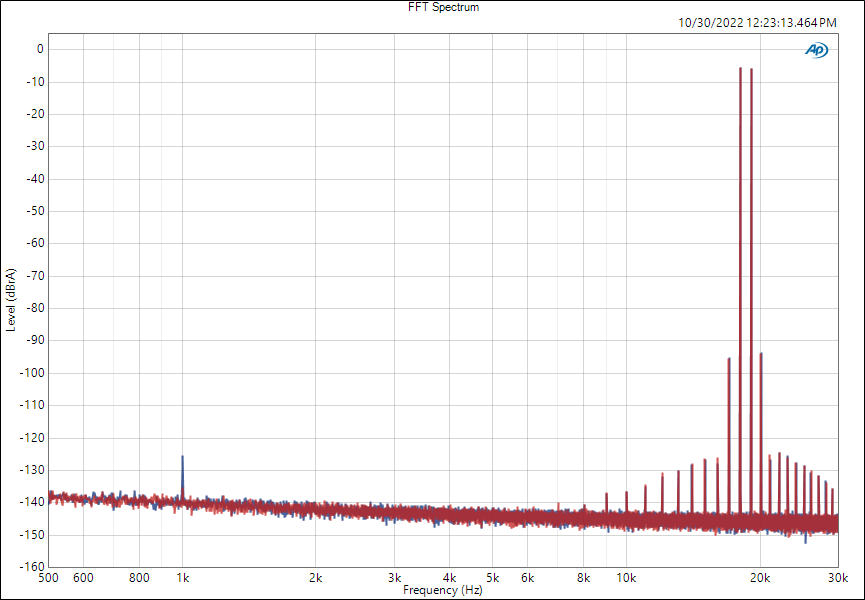 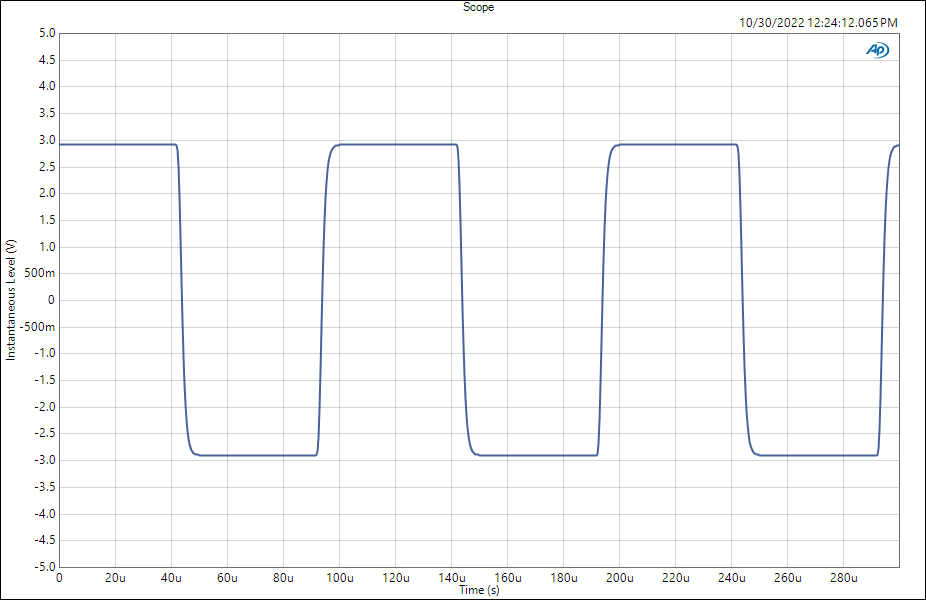 Above is the 10kHz squarewave response at the output into 200k ohms. Due to limitations inherent to the Audio Precision APx555 B Series analyzer, this graph should not be used to infer or extrapolate the P30A’s slew-rate performance. Rather, it should be seen as a qualitative representation of the P30A’s relatively high bandwidth. An ideal squarewave can be represented as the sum of a sine wave and an infinite series of its odd-order harmonics (e.g., 10kHz + 30kHz + 50kHz + 70kHz . . .). A limited bandwidth will show only the sum of the lower-order harmonics, which may result in noticeable undershoot and/or overshoot, and softening of the edges. The P30A’s reproduction of the 10kHz squarewave is clean, with only mild softening in the corners.