I measured the Crosszone CZ-10 headphones using laboratory-grade equipment: a GRAS Model 43AG ear/cheek simulator/RA0402 ear simulator with KB5000/KB5001 simulated pinnae, and an Audiomatica Clio 12 QC audio analyzer. For isolation measurements, I used a laptop computer running TrueRTA software with an M-Audio MobilePre USB audio interface. For most measurements, the headphones were amplified using a Musical Fidelity V-CAN amplifier; I used a Schiit Magnius amplifier for distortion measurements. These are “flat” measurements; no diffuse-field or free-field compensation curve was employed. If you’d like to learn more about what our measurements mean, click here. 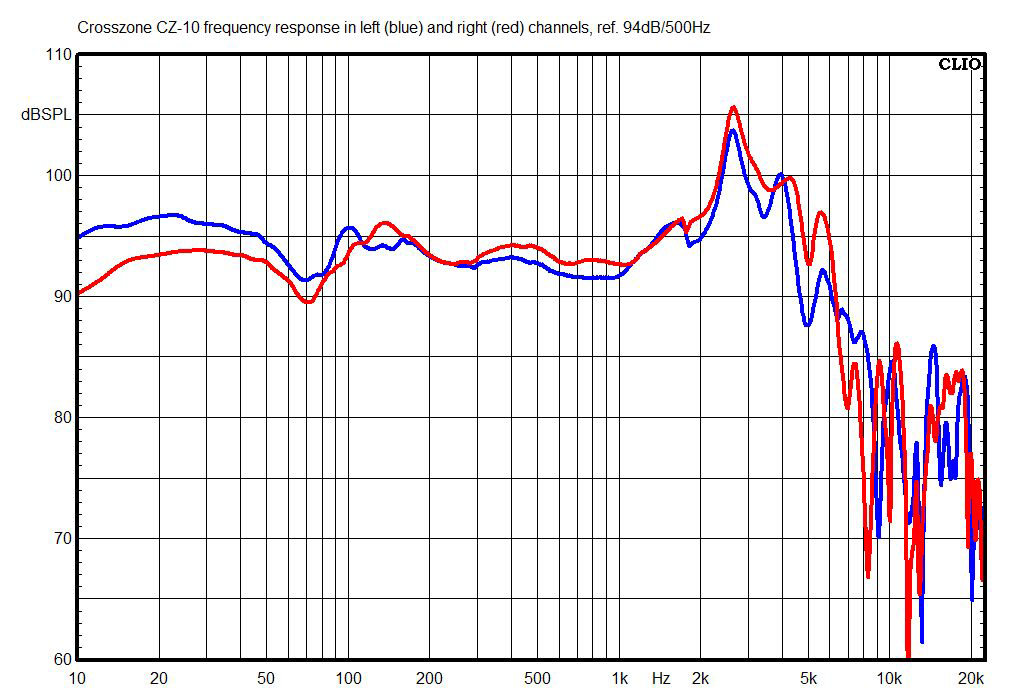 This chart shows the frequency response of the CZ-10s’ right- and left-channel drivers only, without the contribution of the crossfeed drivers. (This is what I think will show what the tonal balance of these headphones looks like; adding in the contribution of the crossfeed drivers might sound good to the ear, but the cancellation effects will just look bizarre to a microphone.) This isn’t too crazy a response, considering how unusual the design is. The response is definitely weak in the top two octaves of treble. The bass, while it looks adequate, certainly doesn’t appear to be what you’d call bumping—but more on this later. The peak at around 2.8kHz is common, although its high Q means it covers about 1/4 octave, where usually this peak would cover about a full octave. So this probably wouldn’t sound too unusual, but it definitely wouldn’t sound airy. 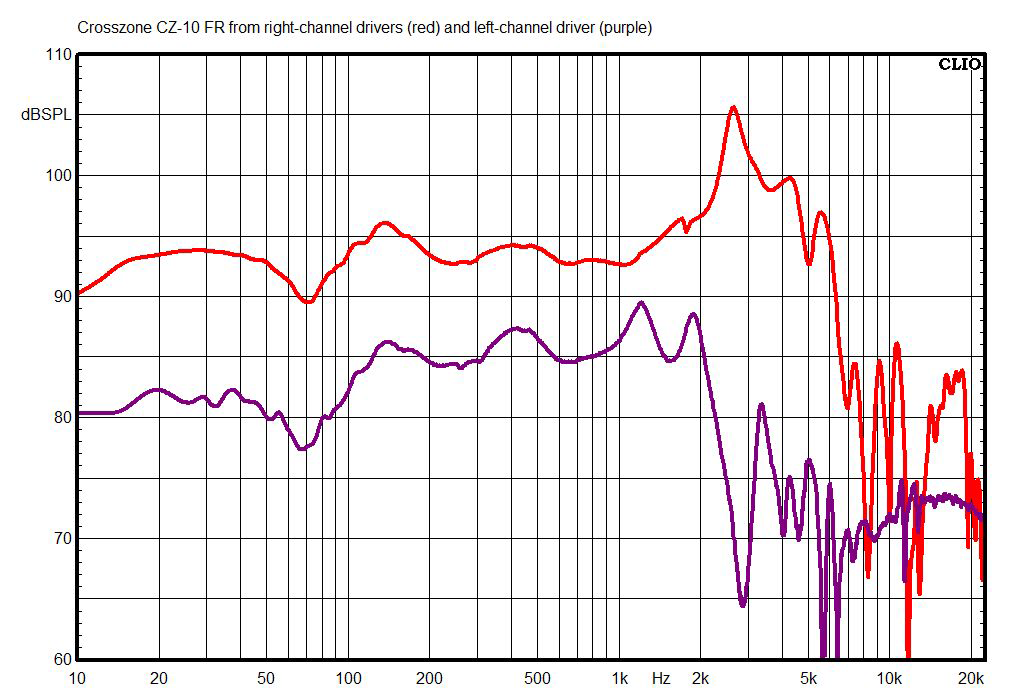 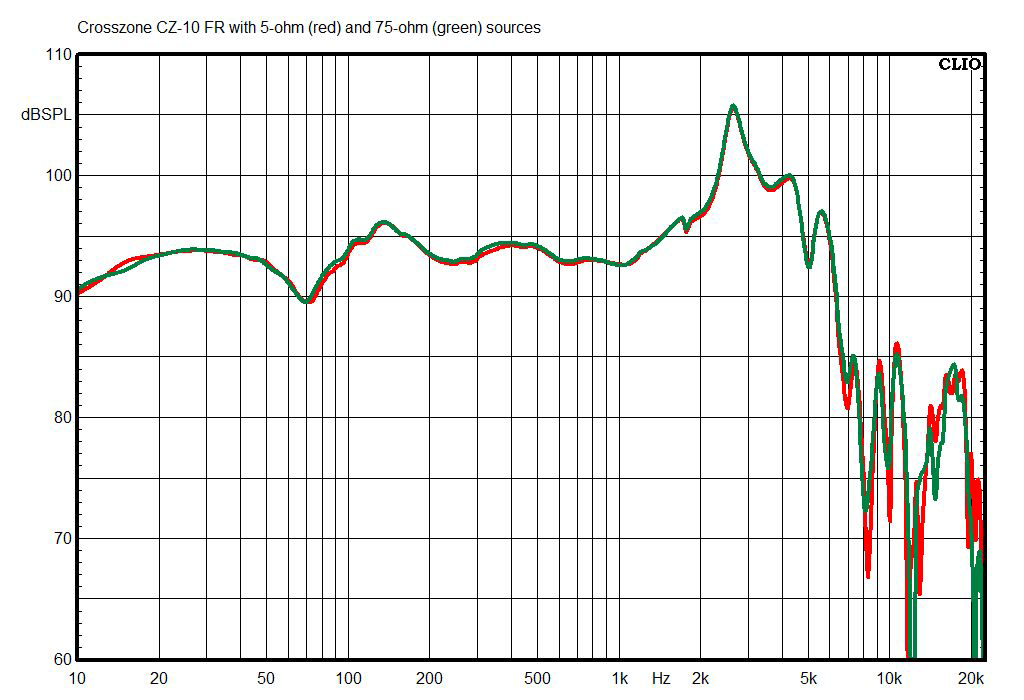 Here we can see the difference in the CZ-10s’ response when a high-impedance (75 ohms) source is substituted for a typical low-impedance source (5 ohms). The difference is negligible, so as long as the amp has enough power to drive the CZ-10s, it shouldn’t affect their sound. 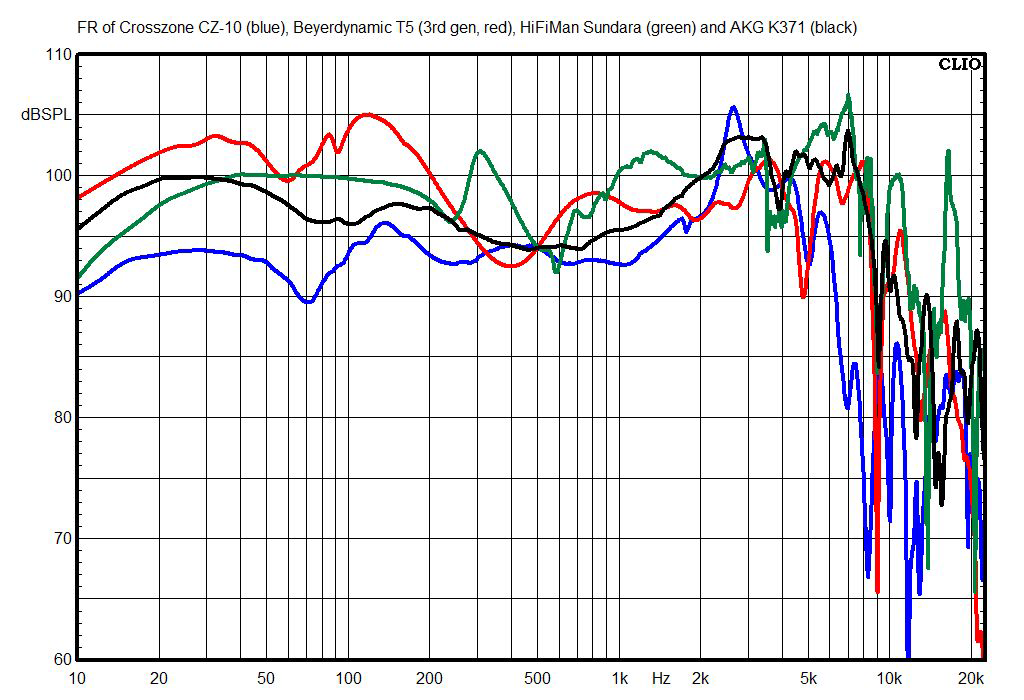 This chart shows the CZ-10s’ right-channel-only (no crossfeed driver) response compared with two closed-back models (the Beyerdynamic T5 3rd Generation and AKG K371 headphones) and an open-back model (the HiFiMan Sundara headphhones). All are normalized to 94dB at 500Hz. In this chart, the CZ-10s certainly seem bass-deficient, but they didn’t sound that way; my guess is that the left-channel crossfeed driver is in phase with the right-channel drivers at low frequencies, and thus elevates the overall bass level. 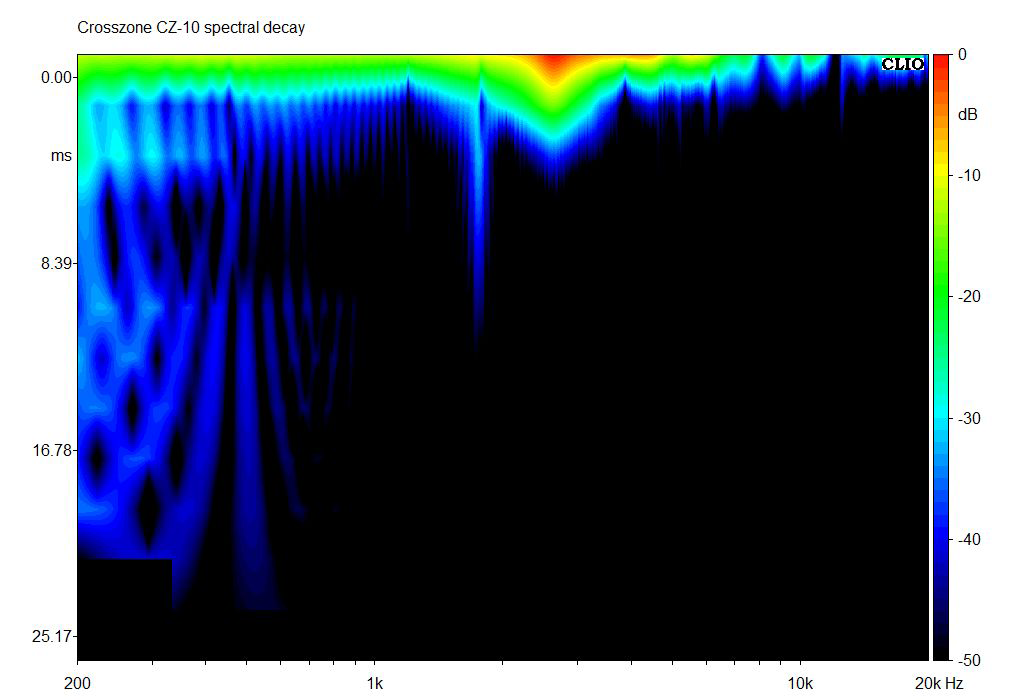 The CZ-10s’ spectral decay—i.e., resonance plot—shows a pretty strong resonance centered at 2.8kHz, the same frequency as the peak in the frequency response. But it’s well-damped, and totally imperceptible after just 10ms. 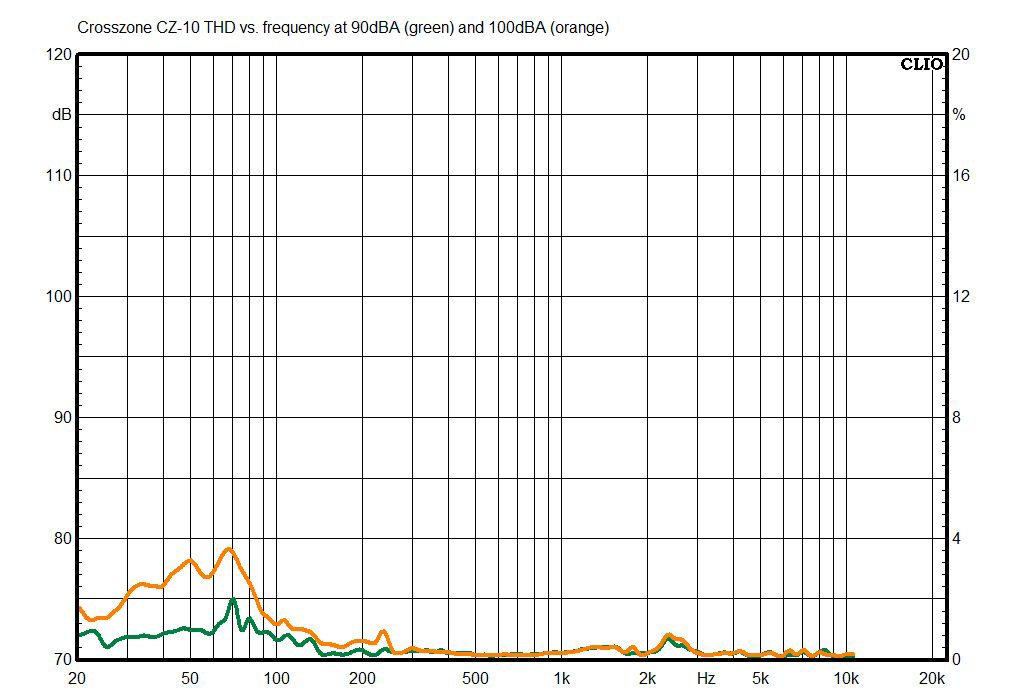 Here’s the THD vs. frequency chart, measured at 90dBA and 100dBA, both levels set with pink noise, using just the right-channel drivers with no crossfeed driver. There’s some observable distortion in the bass, which isn’t unusual for dynamic drivers, but considering that it’s below 4% THD even at the insanely loud level of 100dBA, I’d be very surprised if it’s audible. 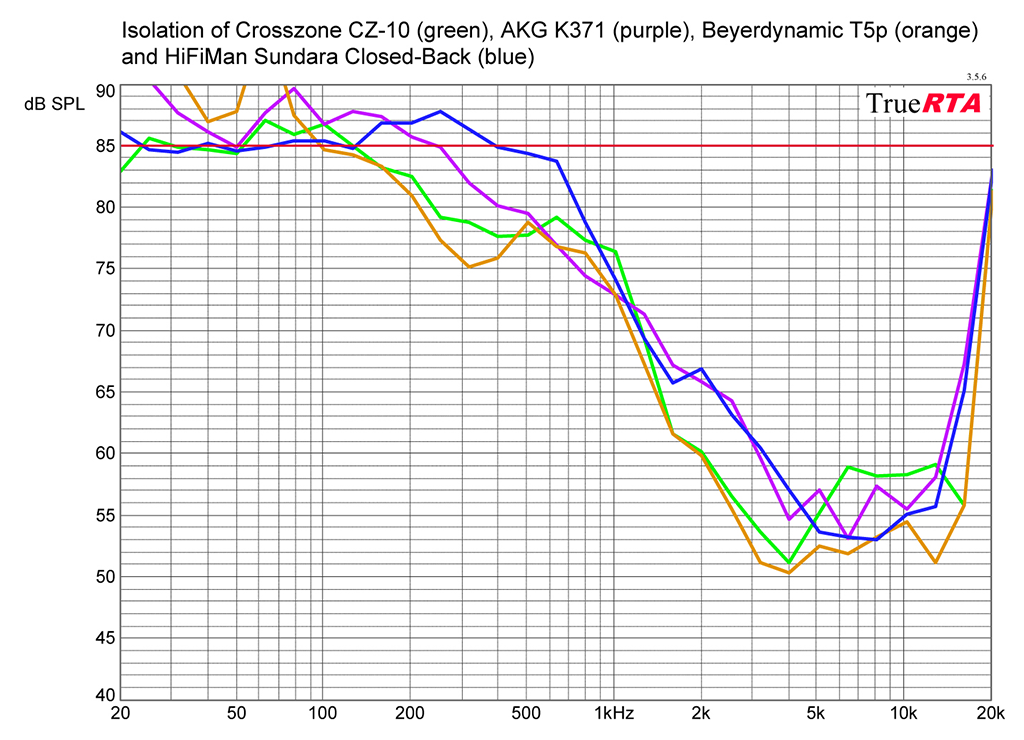 In this chart, the external noise level is 85dB SPL (the red trace), and numbers below that indicate the degree of attenuation of outside sounds. The CZ-10s’ isolation is almost the same as all the other models included here. 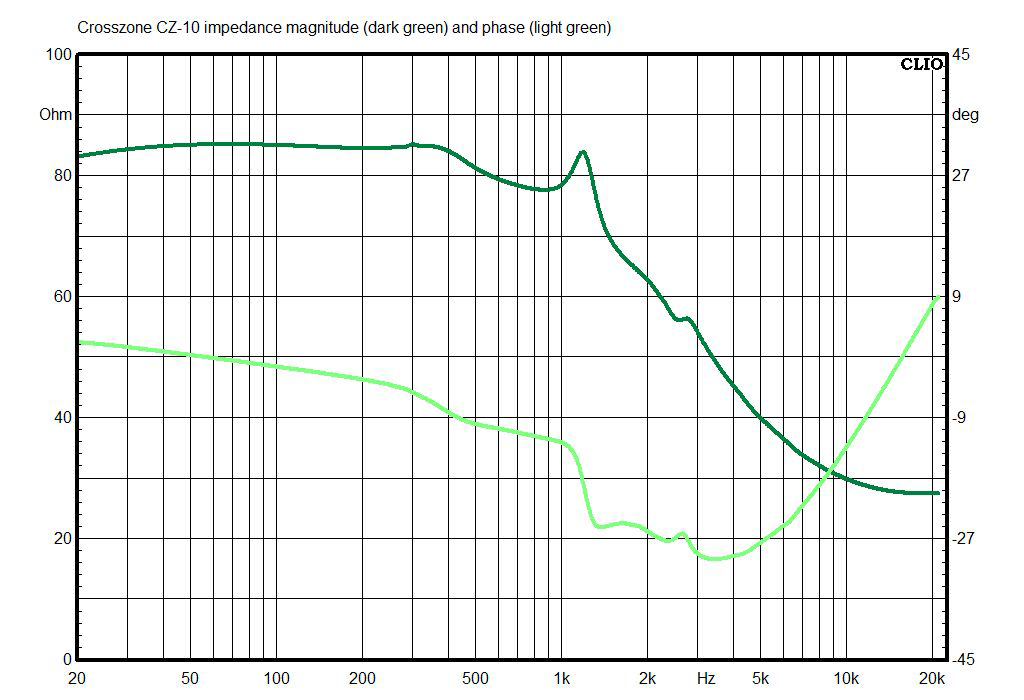 The impedance of the CZ-10s takes a big plunge, running about 85 ohms in the bass but plunging to below 30 ohms in the treble. There’s a corresponding phase swing (apologies for exaggerating the phase shift; my scale is usually +180 to -180 degrees). I’m surprised, given this result, that there wasn’t more of a change when I went from the 5-ohm source above to the 75-ohm source.

Sensitivity of the CZ-10s, calculated for 75 ohms rated impedance, using all of the drivers in the right earpiece and averaged from 300Hz to 3kHz, is 100.9dB with a 1mW signal. That’s not terribly low, but low enough that you may not get enough volume if you plug these straight into a smartphone or tablet.

Bottom line: It’s tough to judge headphones like this based on conventional measurements, because they’re about how the contributions of the different drivers add up at the eardrum and are interpreted by the brain. I can confidently say that the Crosszone CZ-10 headphones are lacking in high-frequency response, but that’s the only clear flaw I can see in the measurements.