I measured the Phiaton 900 Legacy headphones using laboratory-grade equipment: a GRAS Model 43AG ear/cheek simulator/RA0402 ear simulator with KB5000/KB5001 simulated pinnae, and an Audiomatica Clio 12 QC audio analyzer. A Reiyin WT-HD06 Bluetooth transmitter was used to send signals from the Clio 12 QC to the headphones. For isolation measurements, I used a laptop computer running TrueRTA software with an M-Audio MobilePre USB audio interface. These are “flat” measurements; no diffuse-field or free-field compensation curve was employed. If you’d like to learn more about what our measurements mean, click here. 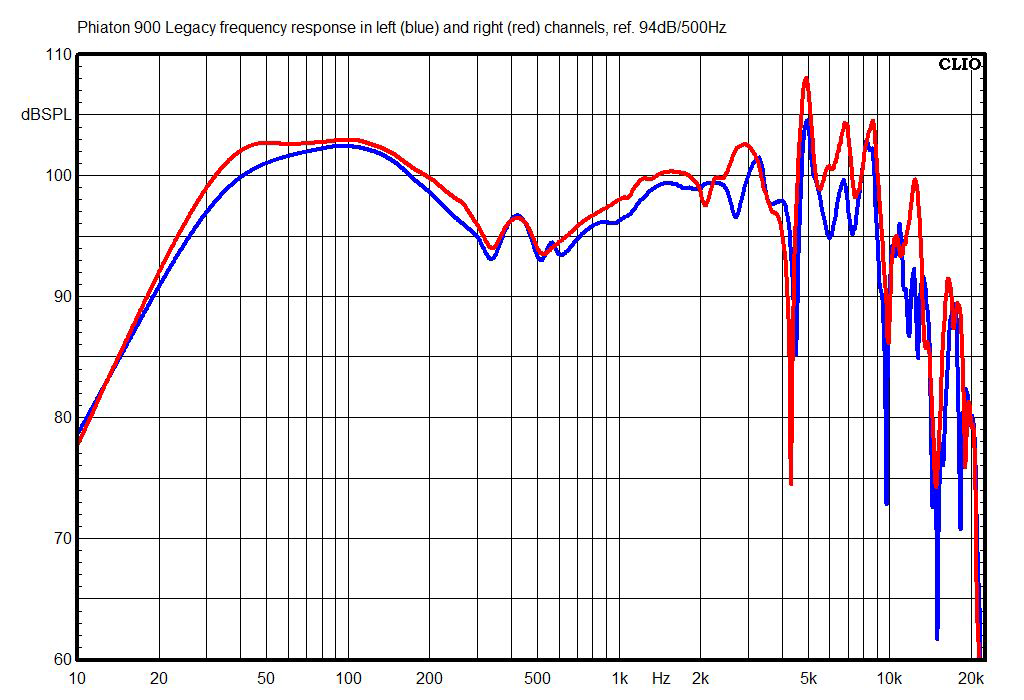 This chart shows the 900 Legacy headphones’ frequency response with the Bluetooth connection and noise canceling on—the mode I expect they’ll most often be used in. There appears to be a modest surplus of mid-treble (5 to 10kHz) energy relative to the usual peak at about 3kHz, and the bass looks a little pumped-up. 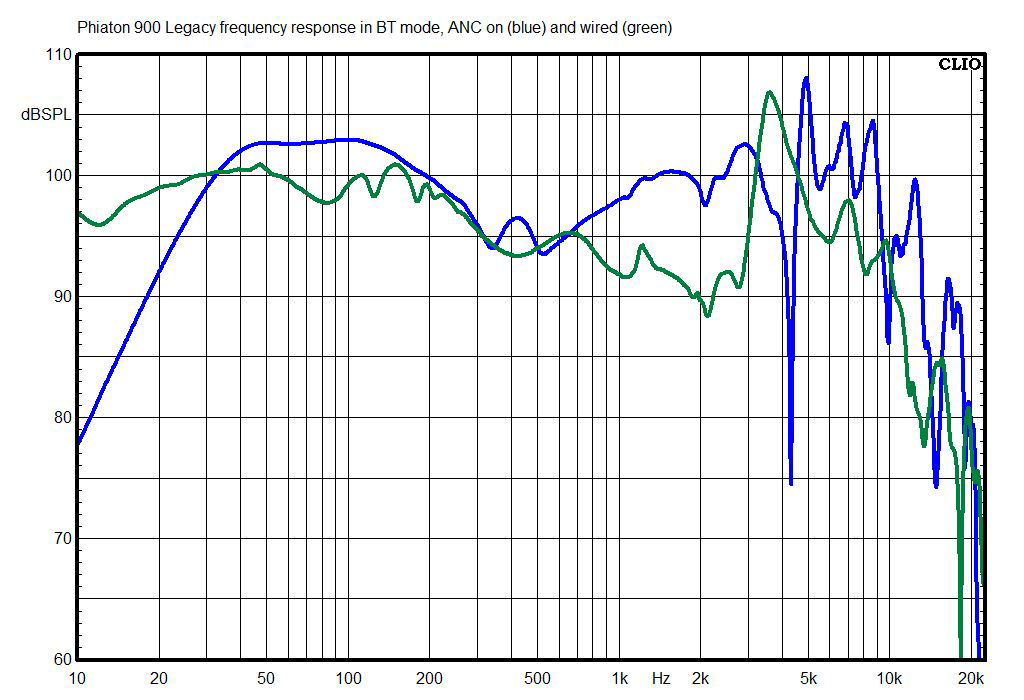 This chart shows the difference in response between the Bluetooth/ANC mode and the wired mode with the power off. In the wired more, there’s not as much bass, and the mids seem muted, but this is not that far off from what I measure with many planar-magnetic audiophile headphones. 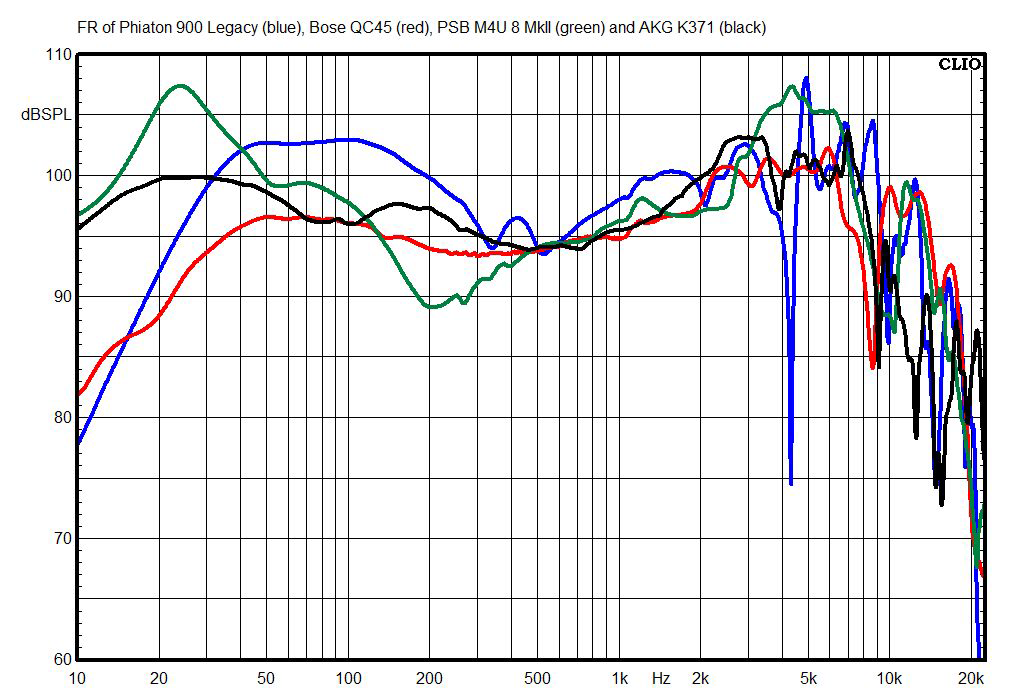 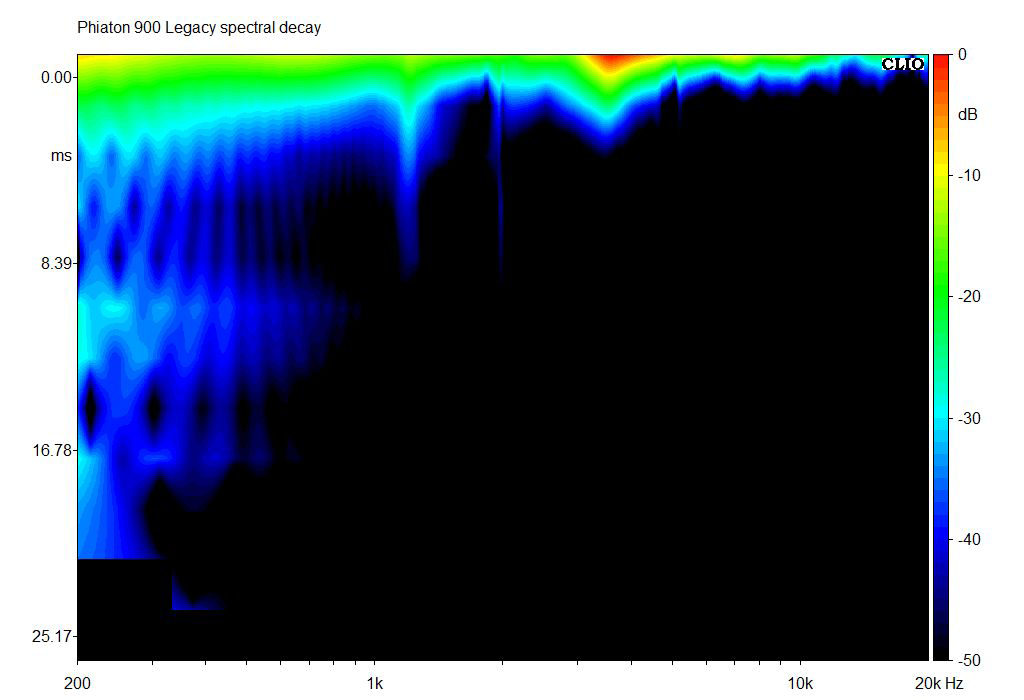 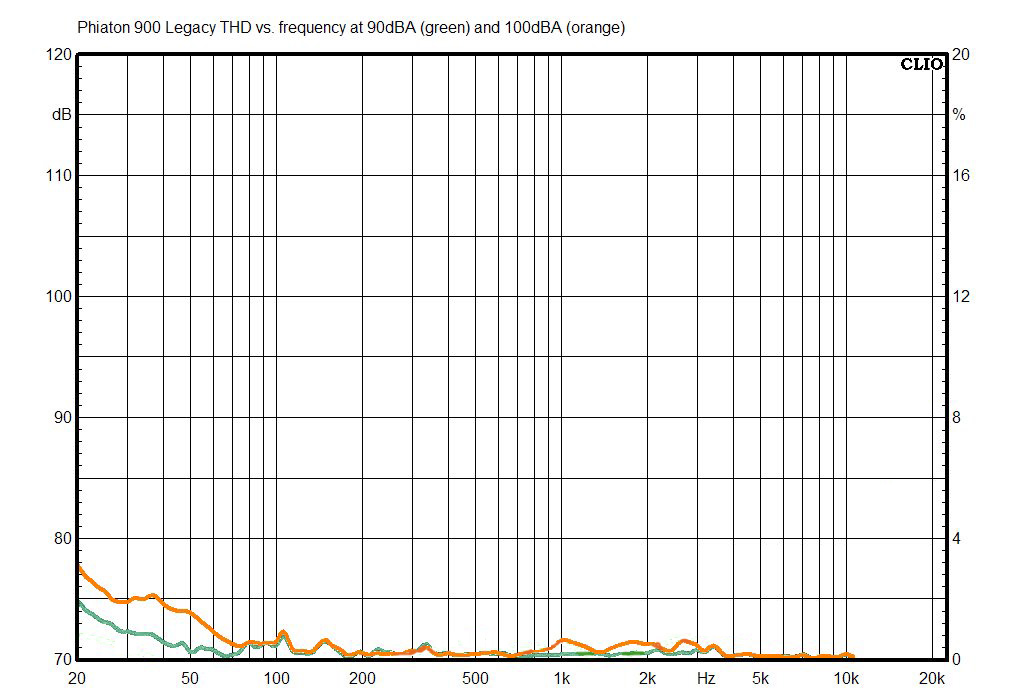 Here’s the THD vs. frequency, measured using the wired connection at 90dBA and 100dBA (both levels set with pink noise). It’s very low, even at the extremely loud 100dBA level. 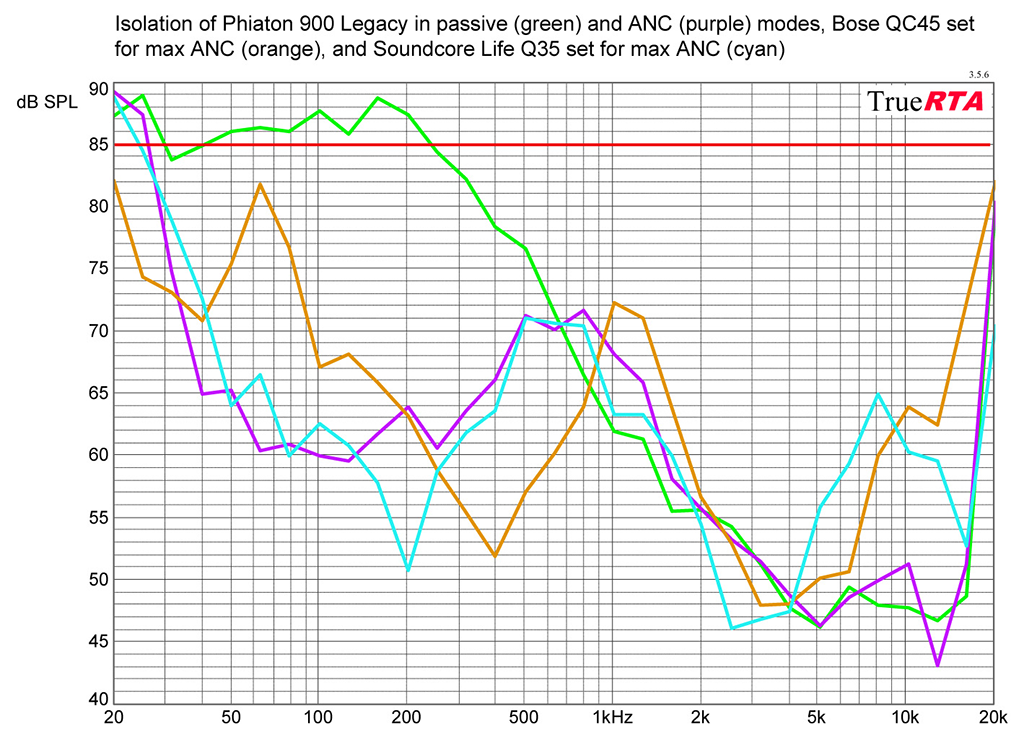 In this chart, the external noise level is 85dB SPL (the red trace), and numbers below that indicate the degree of attenuation of outside sounds. The lower the lines, the better the isolation. This is impressive—the 900 Legacy headphones come close to some of the class leaders in noise-canceling performance, but because they don’t have as abrupt a shift in noise-canceling effect going from 100Hz to 1kHz, they don’t produce as much eardrum suck as some competitors do. 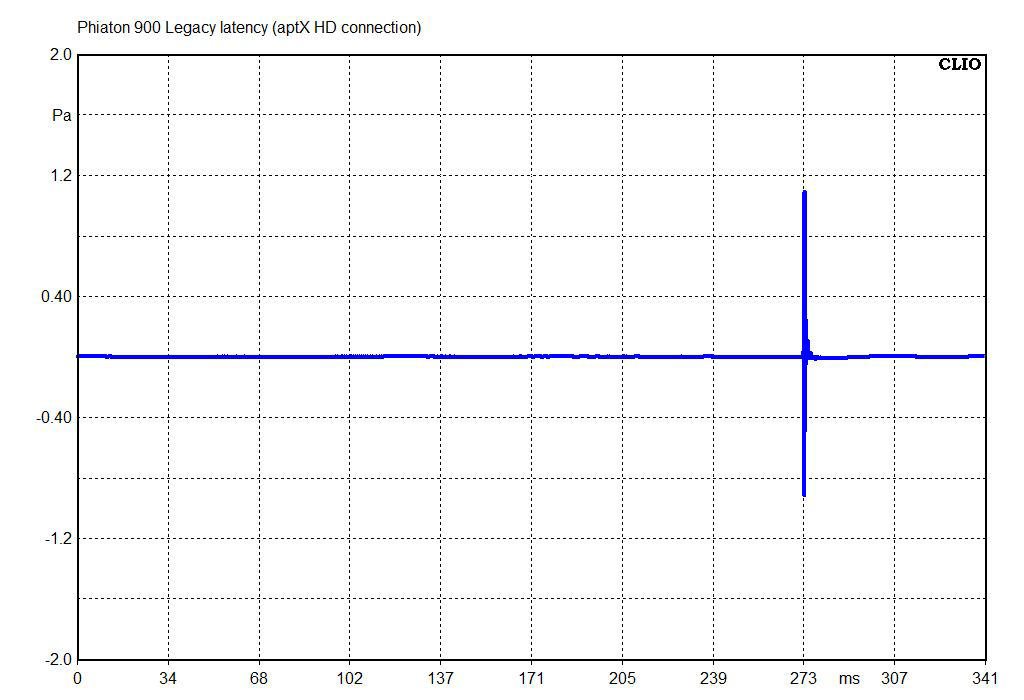 Latency, measured with the Reiyin Bluetooth transmitter in aptX HD mode averaged about 275ms, which is high. So these probably won’t be your first choice for gaming or video watching. 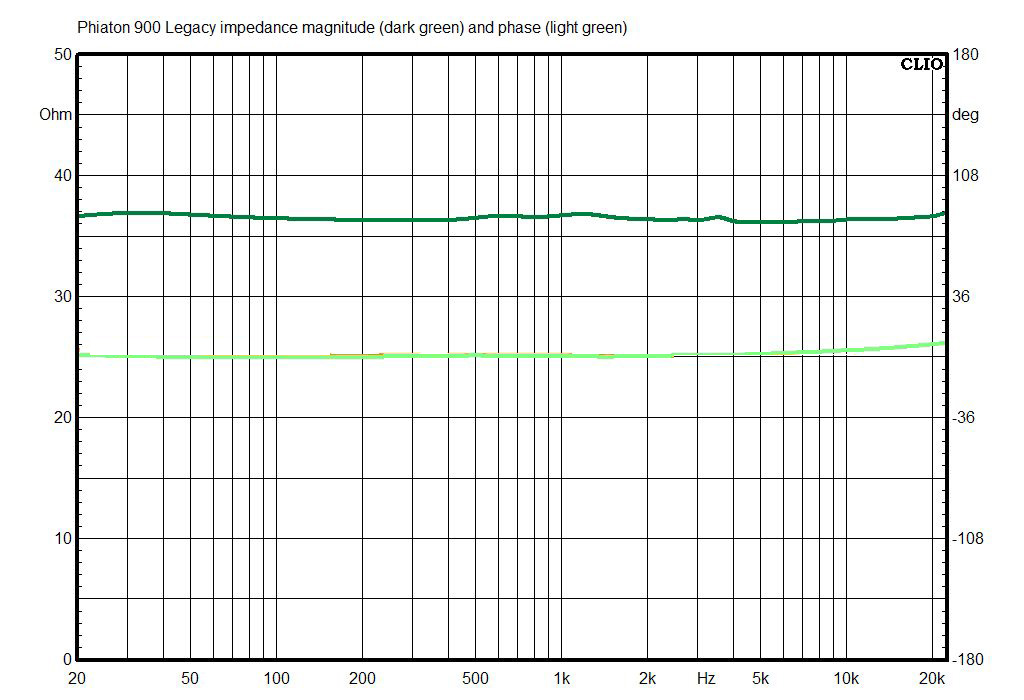 The impedance magnitude, measured in wired mode with the power off, averages about 32 ohms, roughly double the rated 16 ohms.

Sensitivity with the wired connection, calculated for 16 ohms rated impedance, averages 92.2dB from 300Hz to 3kHz, which is about 10dB less than I’d expect. These might not play quite loud enough for you when you plug into the inflight entertainment system on the decrepit airliner you’re flying that doesn’t yet give you free movies on your phone through Wi-Fi.

Bottom line: The Phiaton 900 Legacy headphones’ measured performance is generally excellent. They might be a little on the bassy side for some, but they won’t sound boomy or dull, and their noise-canceling performance is great.