I measured the V-Moda Crossfade 2 Wireless Rolling Stones Tattoo You headphones (which I will from this point on refer to as the Tattoo Yous) using laboratory-grade equipment: a GRAS Model 43AG ear/cheek simulator/RA0402 ear simulator with KB5000/KB5001 simulated pinnae, and an Audiomatica Clio 12 QC audio analyzer. A Reiyin WT-04 USB Bluetooth transmitter was used to send signals from the Clio 12 QC to the headphones. For isolation measurements, I used a laptop computer running TrueRTA software with an M-Audio MobilePre USB audio interface. For cabled measurements, the headphones were amplified using a Musical Fidelity V-CAN amplifier. These are “flat” measurements; no diffuse-field or free-field compensation curve was employed. If you’d like to learn more about what our measurements mean, click here. 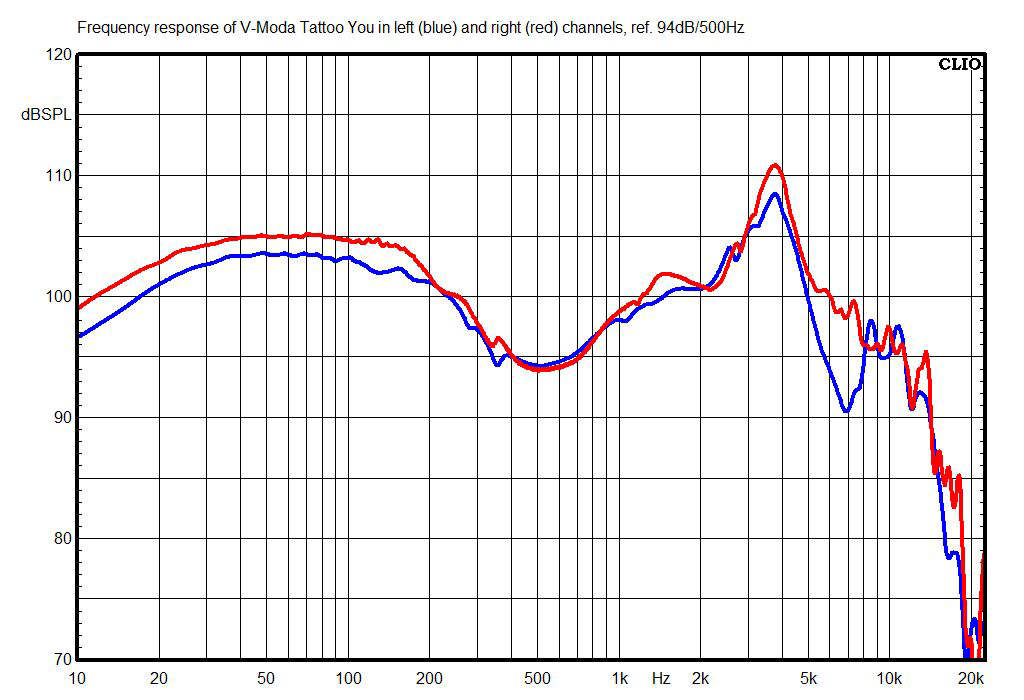 This chart shows the Tattoo Yous’ frequency response with the wired connection (which we’ll see in the next chart is very similar to the response in Bluetooth mode). The bass is strong with this one—there’s a lot of energy in the upper-bass region, between about 100 and 300Hz, which we know tends to make headphones sound muddy and boomy. (This is why Harman-curve headphones show a bass boost below about 100Hz, but not so much in the upper bass.) They also show a larger-than-normal magnitude peak at about 4kHz, which would likely result in these having a “smiley” (bass and treble boosted) response. 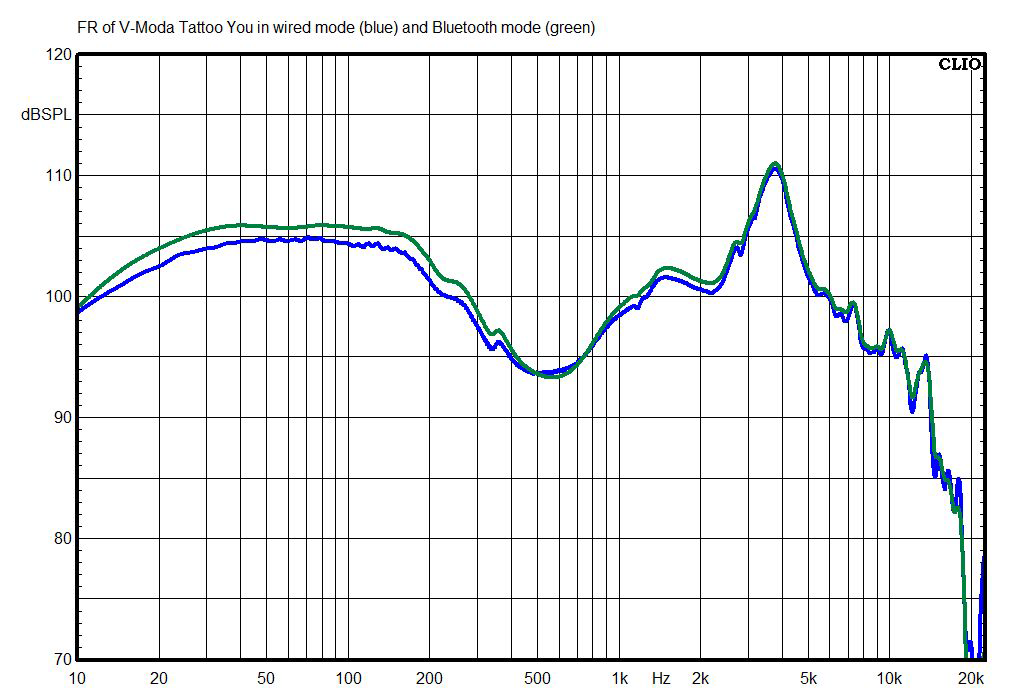 Here we can see the difference in response between the Bluetooth connection and the wired connection. It’s a very small difference, within the range of error of typical headphone frequency-response measurements. 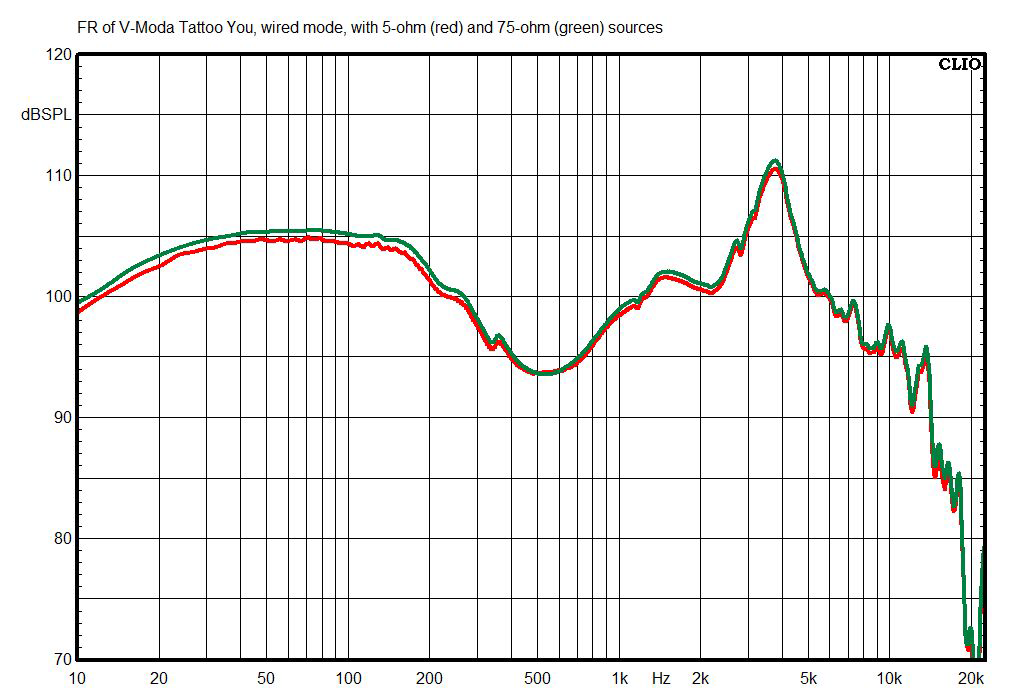 Thinking that someone might want to use these in a pro setting, with the wired connection, I ran a frequency-response measurement with a 75-ohm source instead of my usual 5-ohm source. It looks like the high-impedance source will produce a boost of about 1dB at 500Hz, which is unlikely to produce a readily audible change in timbre. 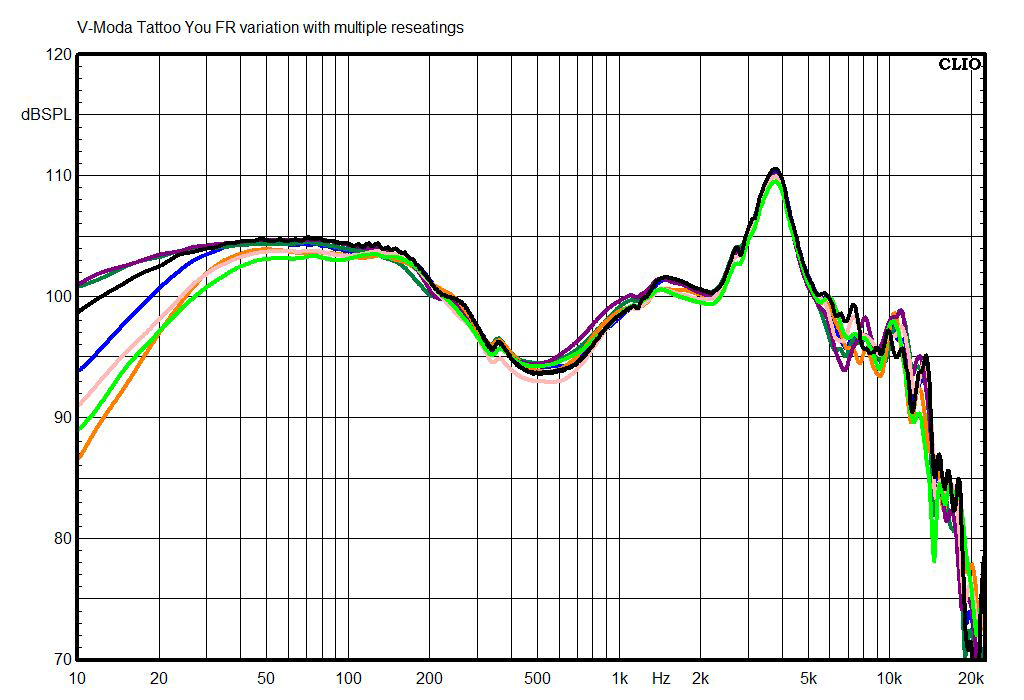 In this chart, the black trace shows the right-channel wired frequency response I used for the above charts, and the other traces show how the response varied when I reseated the headphones several times on the ear-cheek simulator, and when I moved the headphones about 6mm forward, back, up, and down. There are big differences in the bass (not surprising, considering that the Tattoo Yous are on the borderline between on-ear and over-ear), but almost none in the mids and treble. But of course, big differences in bass response will change your perception of the mids and treble. 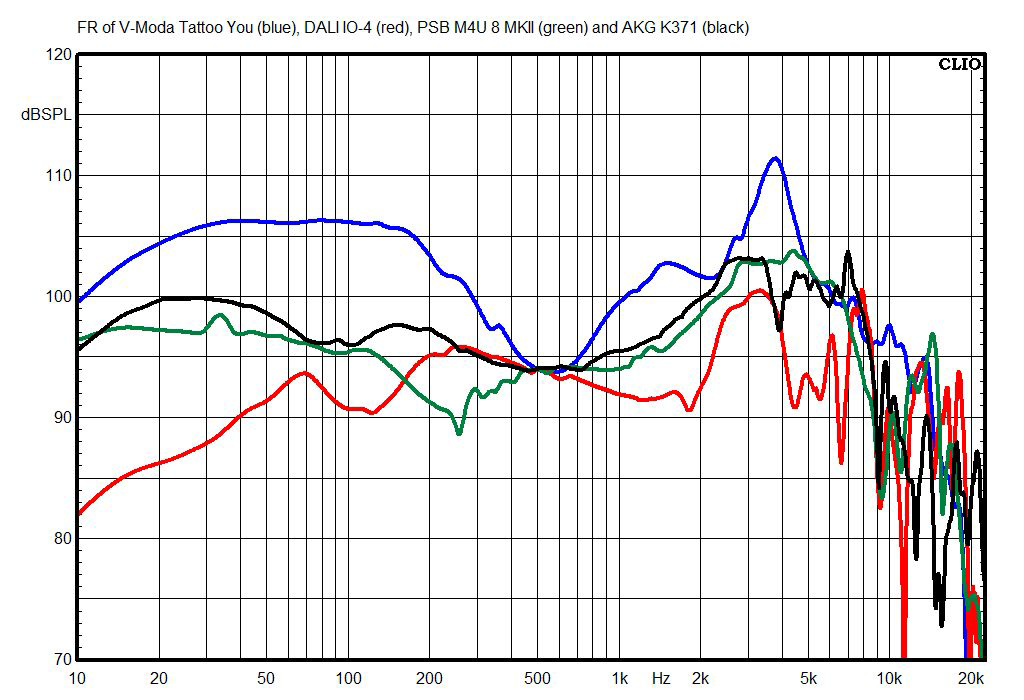 This chart shows the Tattoo Yous’ response compared with the DALI IO-4 and PSB M4U 8 MKII headphones (all in Bluetooth mode, noise canceling off on the PSBs), and with the AKG K371 passive headphones, which are said to be very close to the Harman curve. You can see how elevated the Tattoo Yous’ response is in the bass and treble, relative to that of the other models. 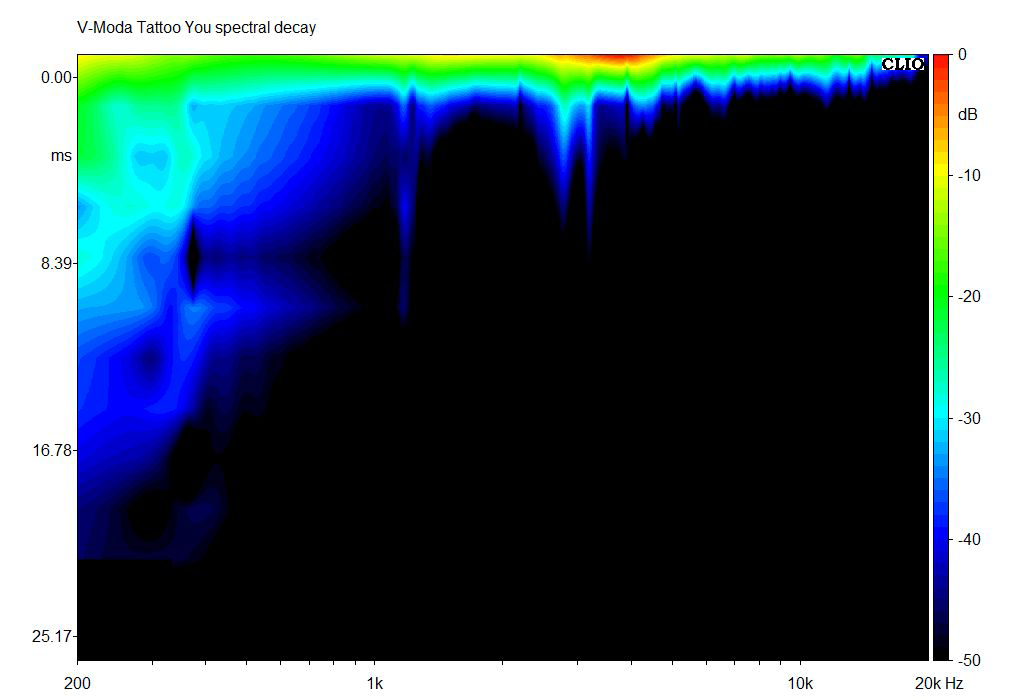 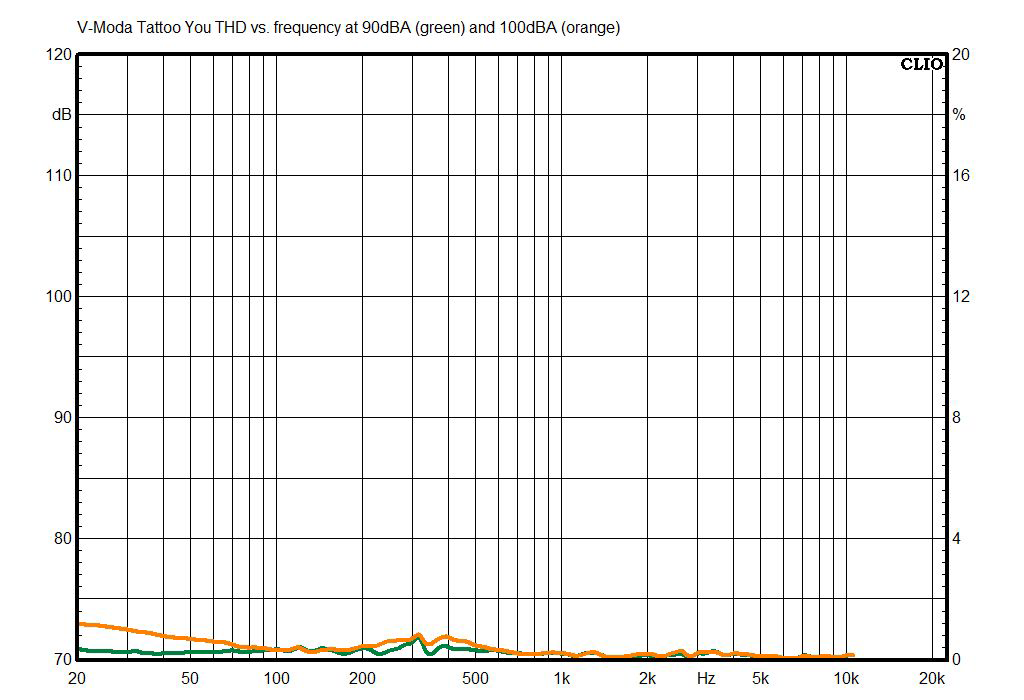 Here’s the THD vs. frequency chart, measured using the wired connection (with the power off) at 90dBA and 100dBA (both levels set with pink noise). Distortion is very low at both levels. 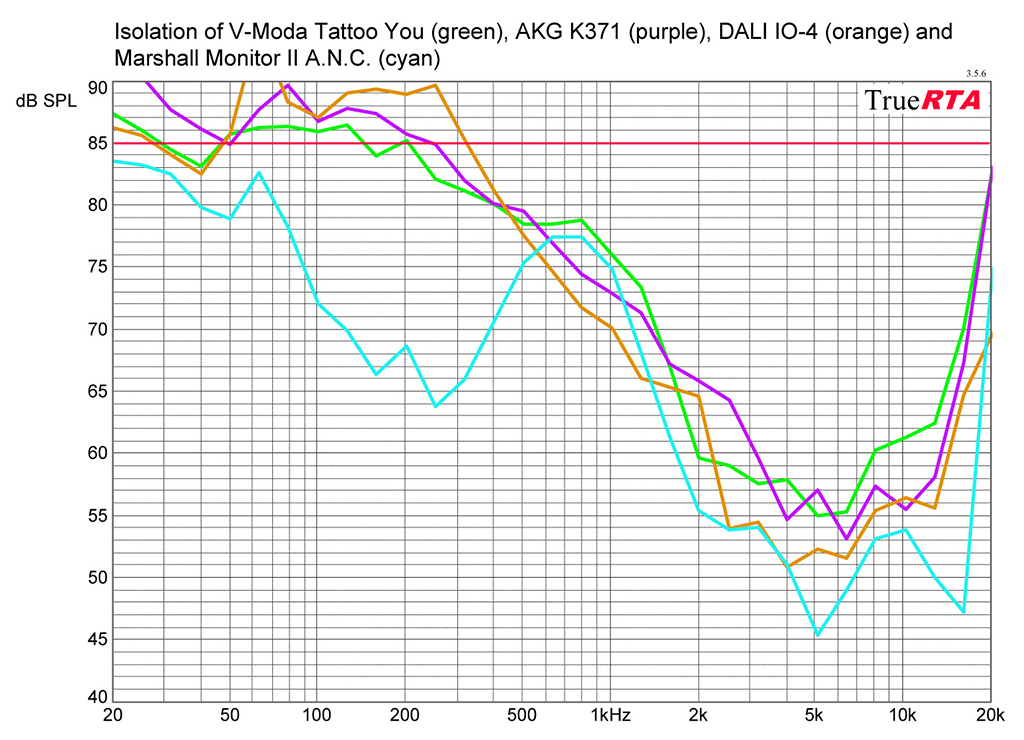 In this chart, the external noise level is 85dB SPL (the red trace), and numbers below that indicate the degree of attenuation of outside sounds. The lower the lines, the better the isolation. The Tattoo Yous’ noise isolation, compared with other closed-back models of the same approximate size, is typical. I threw in the Marshall noise-canceling model so you could get an idea of what noise canceling adds to a product like this. 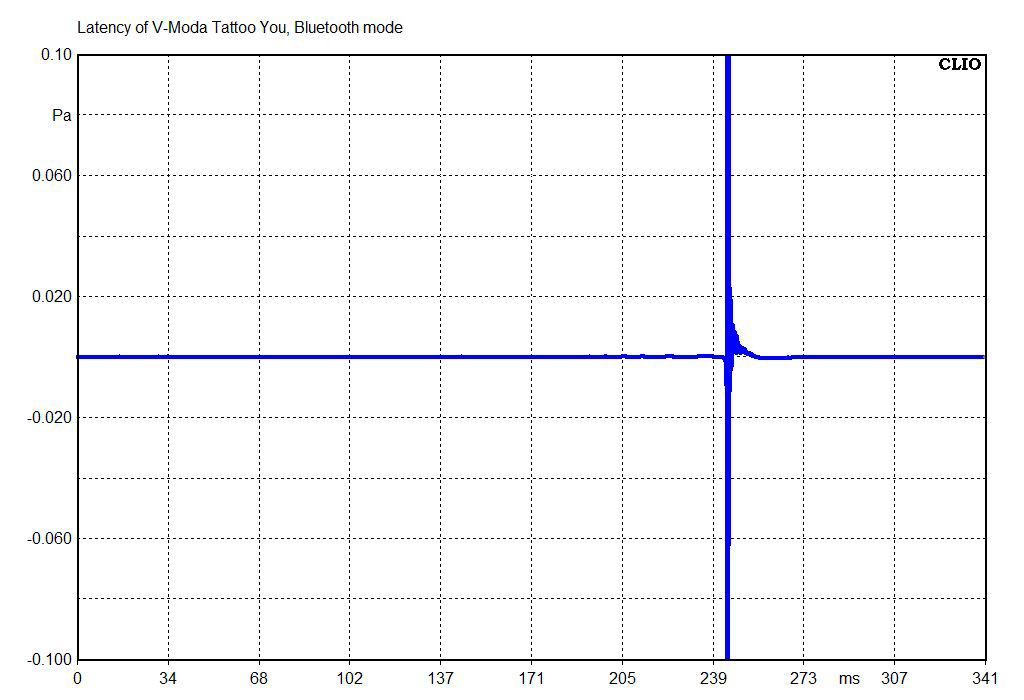 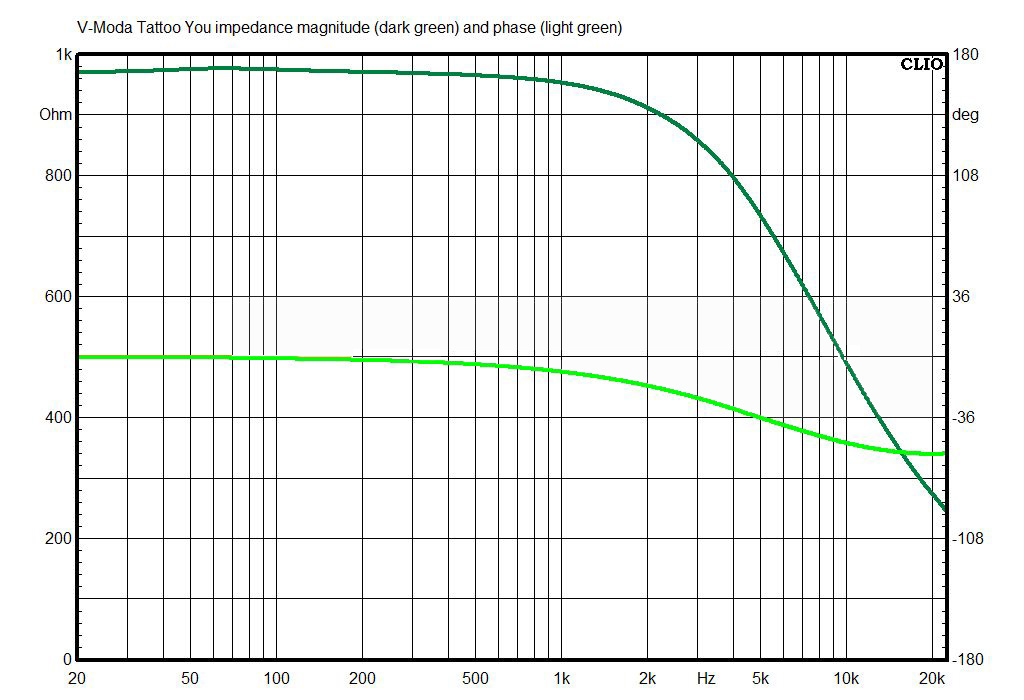 The impedance magnitude, measured in passive (power off) mode with the cabled connection, averages about 970 ohms below 1kHz, then takes a dive as frequency rises from there. This is pretty typical of active headphones.

Sensitivity, measured at 1mW and calculated for the rated 32 ohms impedance, averages 105.6dB from 300Hz to 3kHz, so any source can drive these to high levels through the wired connection.

Bottom line: Other than the frequency response—which would have looked pretty normal in the early days of the headphone boom but is clearly anomalous by today’s standards—there’s nothing to be concerned about with the Tattoo You headphones.