I measured the HiFiMan Arya Stealth Magnet Version headphones using laboratory-grade equipment: a GRAS Model 43AG ear/cheek simulator/RA0402 ear simulator with KB5000/KB5001 simulated pinnae, and an Audiomatica Clio 12 QC audio analyzer. For isolation measurements, I used a laptop computer running TrueRTA software with an M-Audio MobilePre USB audio interface. For most measurements, the headphones were amplified using a Musical Fidelity V-CAN amplifier; I used a Schiit Magnius amplifier for distortion measurements. These are “flat” measurements; no diffuse-field or free-field compensation curve was employed. If you’d like to learn more about what our measurements mean, click here. 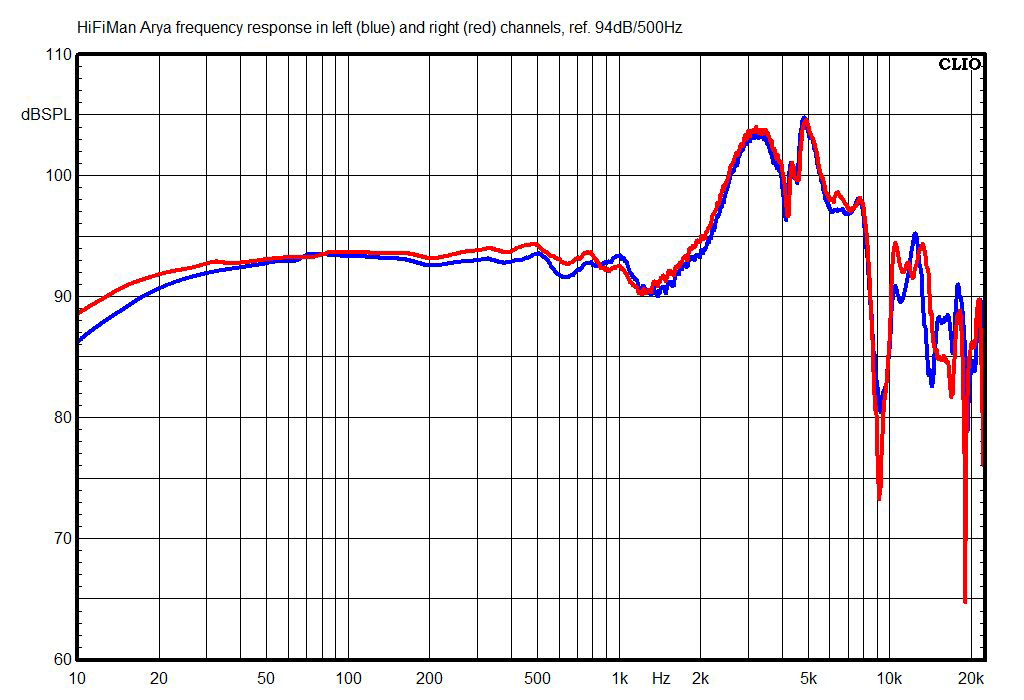 This chart shows the Aryas’ frequency response. This is very typical for HiFiMan headphones—a nearly flat bass response, with a lot of energy in the 3-to-5kHz range. 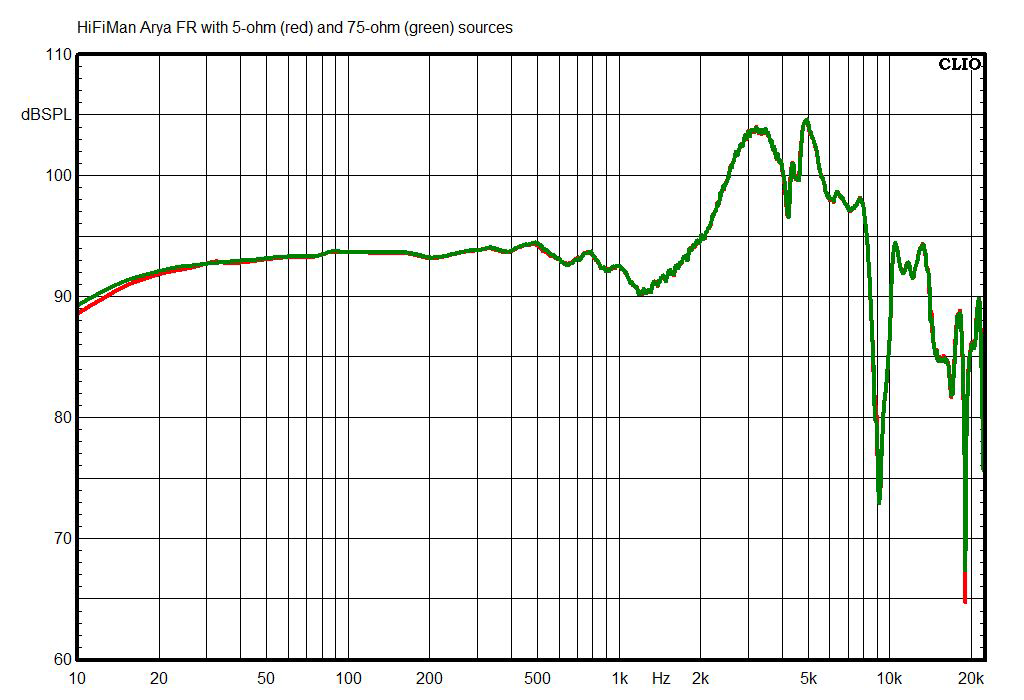 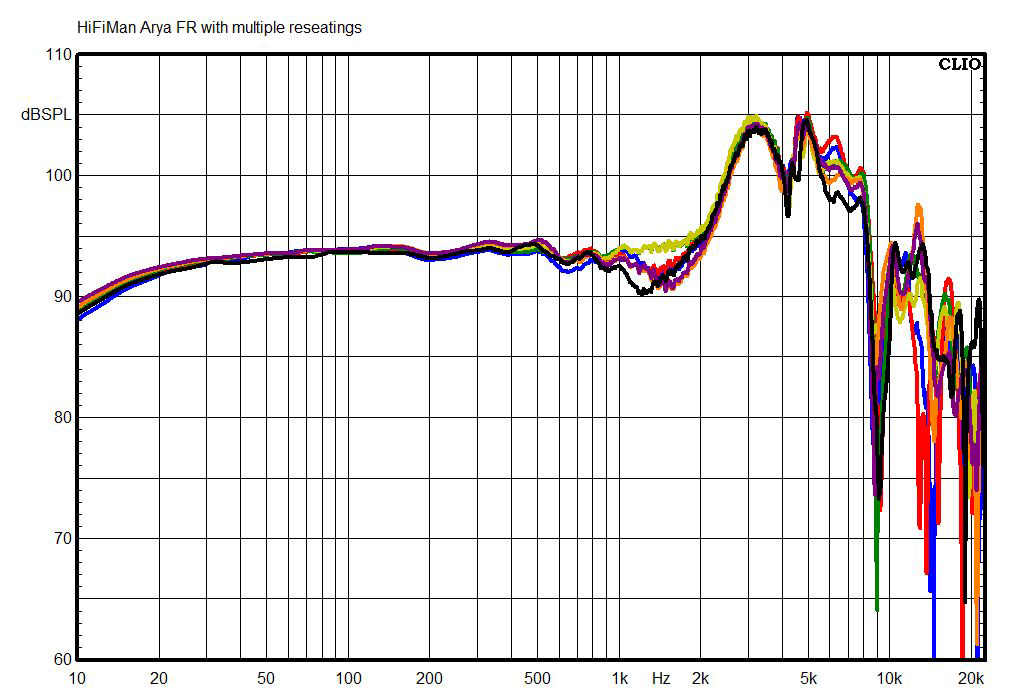 This measurement shows how sensitive the headphones’ response is to the headphones’ position on the ears. The black line shows the curve I used above, which is the curve I got most often with the headphones optimally positioned on the ear/cheek simulator. For the other curves, I reseated the headphones a few times, and also shifted them about 5mm up, down, forward, and back on the cheek plate. The only range that differs significantly with the repositionings is between 6 and 8kHz, so positioning of these around the ears isn’t all that critical. 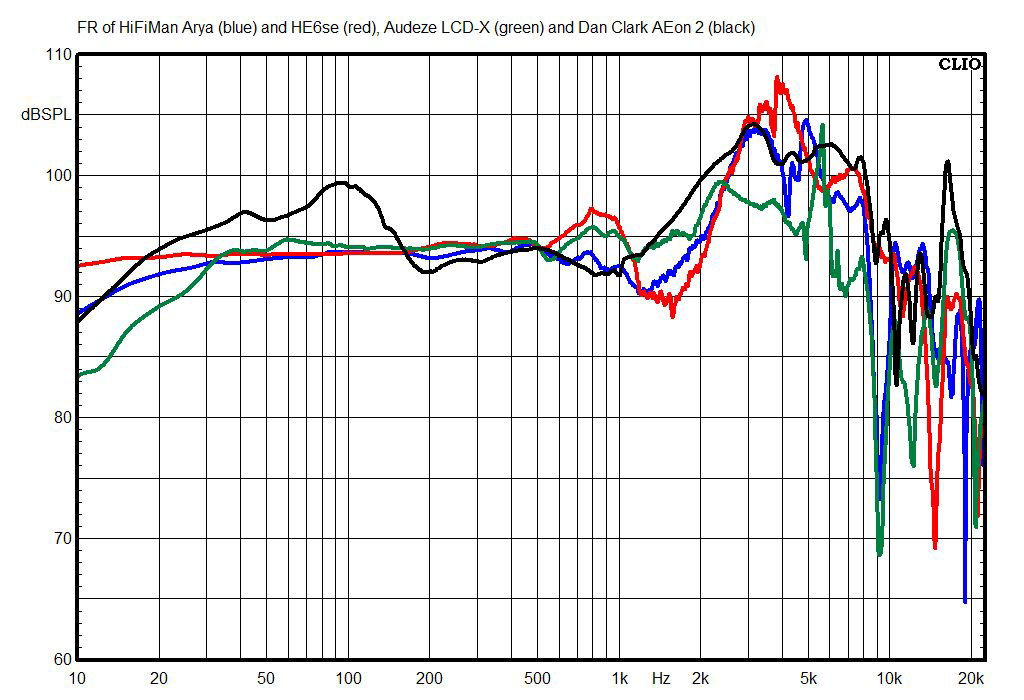 This chart shows the Aryas’ right-channel response, compared with some other open-back models—including the Dan Clark Audio Æon 2s with perforated earpads, which have a response similar to the Harman curve. The Aryas definitely have a lot of energy between 3 and 5kHz, but the HE6se’s have even more. The Dan Clark model is similar in the treble, but has more bass to balance out the sound. 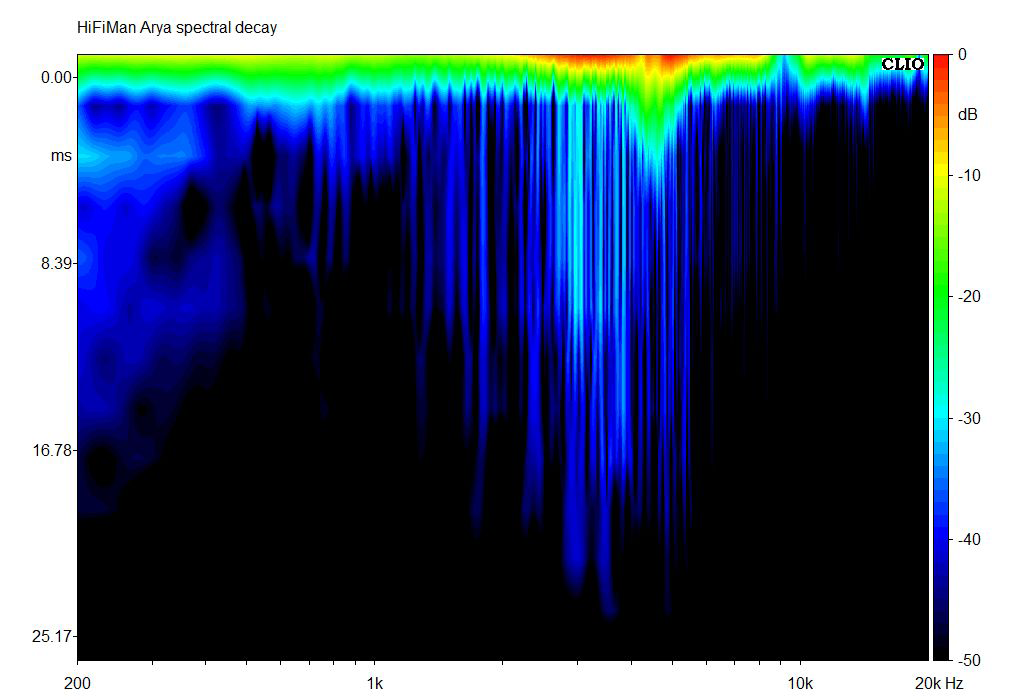 The spectral-decay (waterfall) response of the Aryas has the usual “hash” between about 1 and 6kHz, which is a result of comb-filter effects caused by sound bouncing off the flat planar-magnetic diaphragm. These effects don’t seem to add any particular coloration to the sound, and they may create a greater sense of spaciousness. 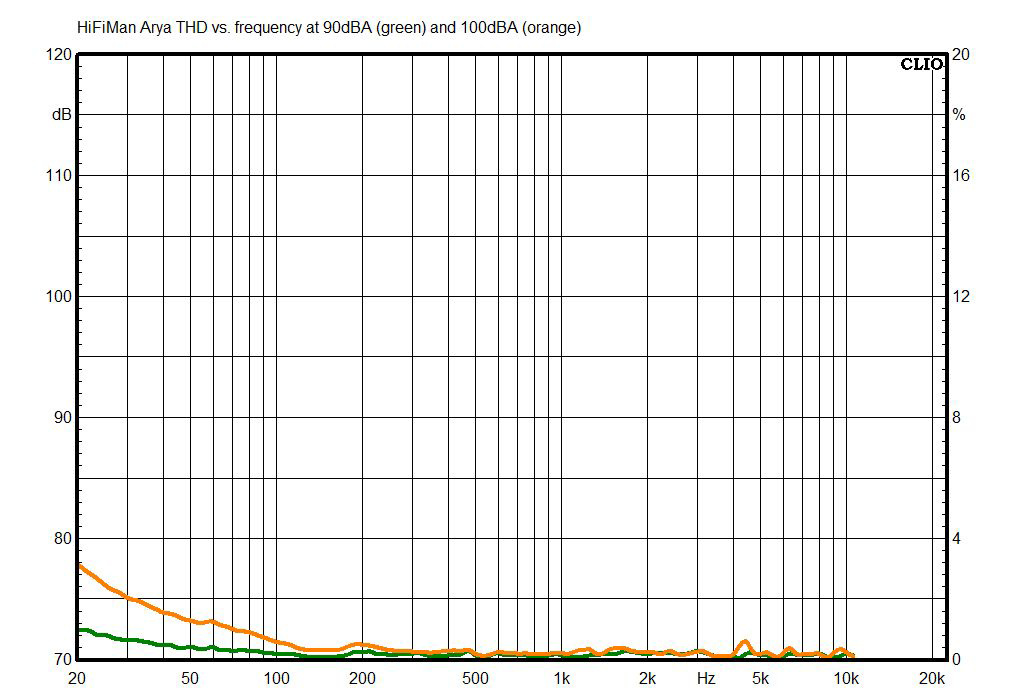 This chart shows the total harmonic distortion, measured at 90dBA and 100dBA (both levels set with pink noise). As usual with planar-magnetic headphones, it’s very low. It does hit about 3% at 20Hz, but that level of distortion is not audible at such a low frequency, and it’s at the extremely loud level of 100dBA, which I doubt your ears could stand for long, anyway. 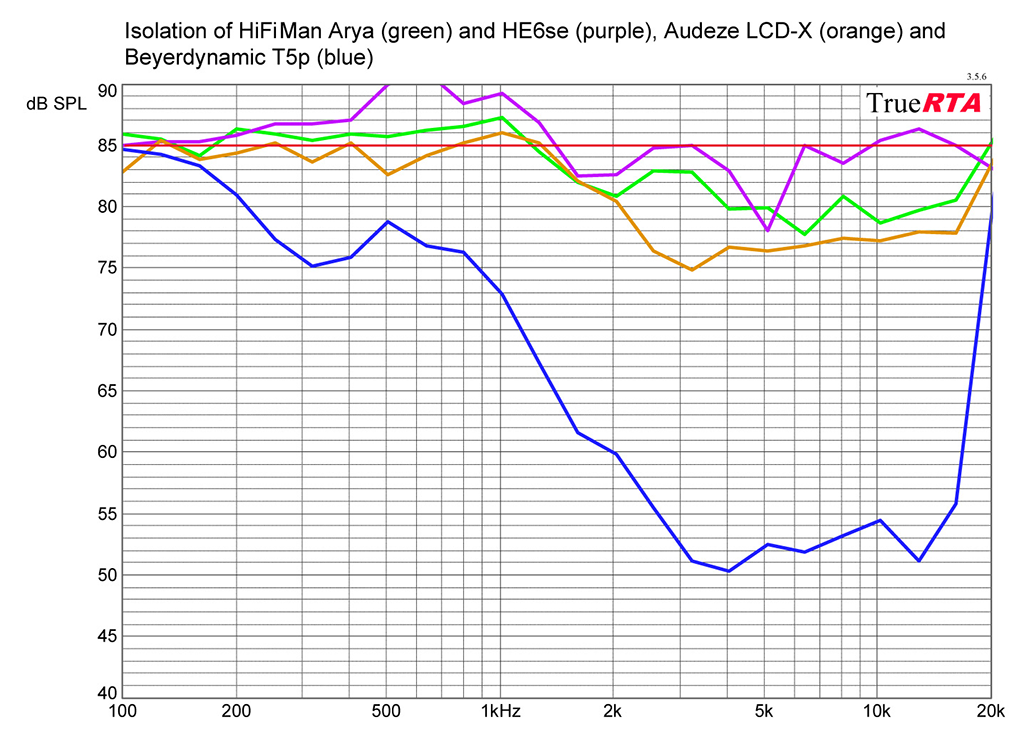 In this chart, the external noise level is 85dB SPL (the red trace), and numbers below that indicate the degree of attenuation of outside sounds. The lower the lines, the better the isolation. The Aryas’ isolation is typical for headphones in its class. 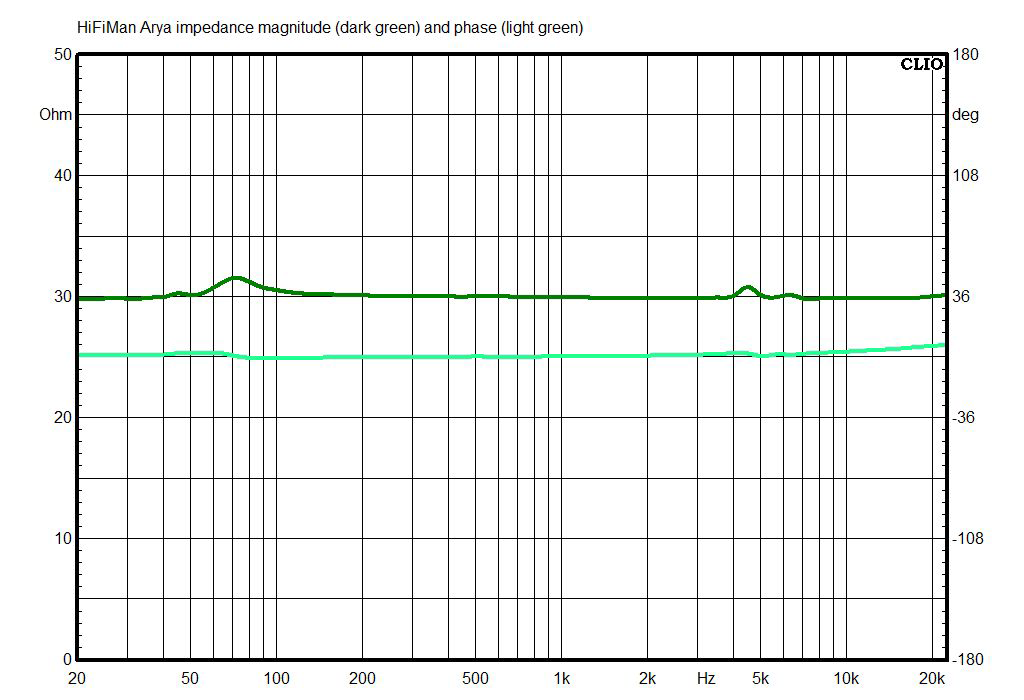 As with most planar-magnetic headphones, electrical impedance magnitude is just about dead-flat, in this case at 30 ohms, and impedance phase shift is close to zero.

Sensitivity of the Aryas, calculated for 32 ohms rated impedance and averaged from 300Hz to 3kHz, is 94.5dB, so using some kind of an external amp, DAC-amp, or high-quality portable music player with these is a good idea.

Bottom line: The frequency-response measurements confirm that these headphones will sound a little bright. I can find nothing in the measurements that should concern a potential buyer.