I measured the PSB M4U 8 MKII headphones using laboratory-grade equipment: a GRAS Model 43AG ear/cheek simulator/RA0402 ear simulator with KB5000/KB5001 simulated pinnae, and an Audiomatica Clio 12 QC audio analyzer. A Reiyin WT-04 USB Bluetooth transmitter was used to send signals from the Clio 12 QC to the headphones. For isolation measurements, I used a laptop computer running TrueRTA software with an M-Audio MobilePre USB audio interface. For cabled measurements, the headphones were amplified using a Musical Fidelity V-CAN amplifier. These are “flat” measurements; no diffuse-field or free-field compensation curve was employed. If you’d like to learn more about what our measurements mean, click here. 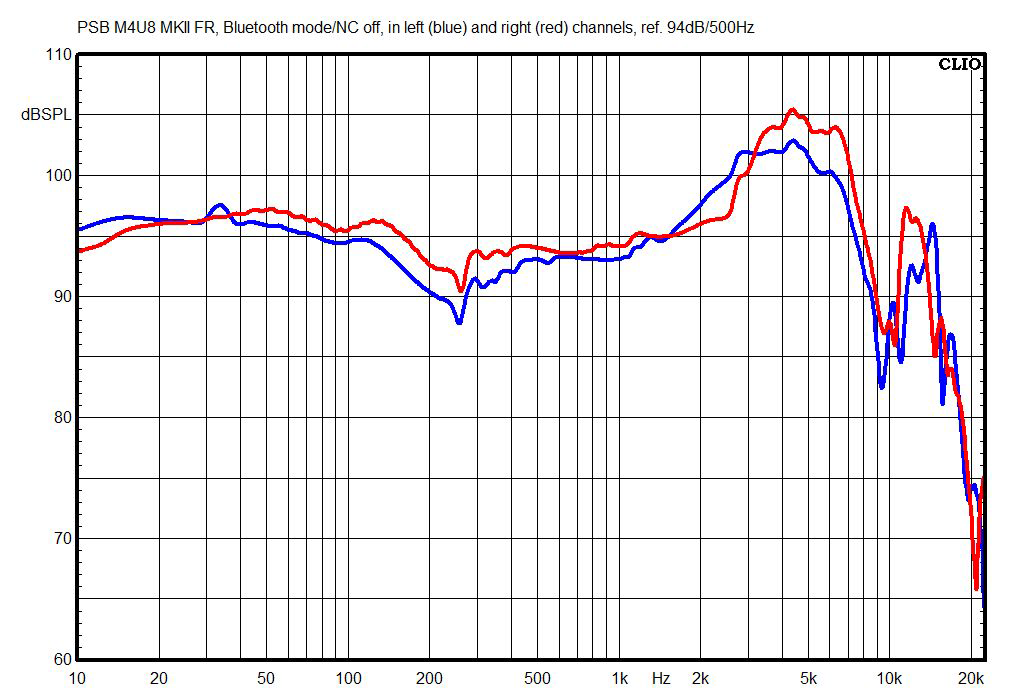 This chart shows the M4U 8 MKIIs’ frequency response, using a Bluetooth connection with noise canceling off, which was my favorite listening mode. This is a fairly conventional response, except that the center frequency of the broad peak between 3 and 7kHz might normally be 1 to 2kHz lower in frequency. 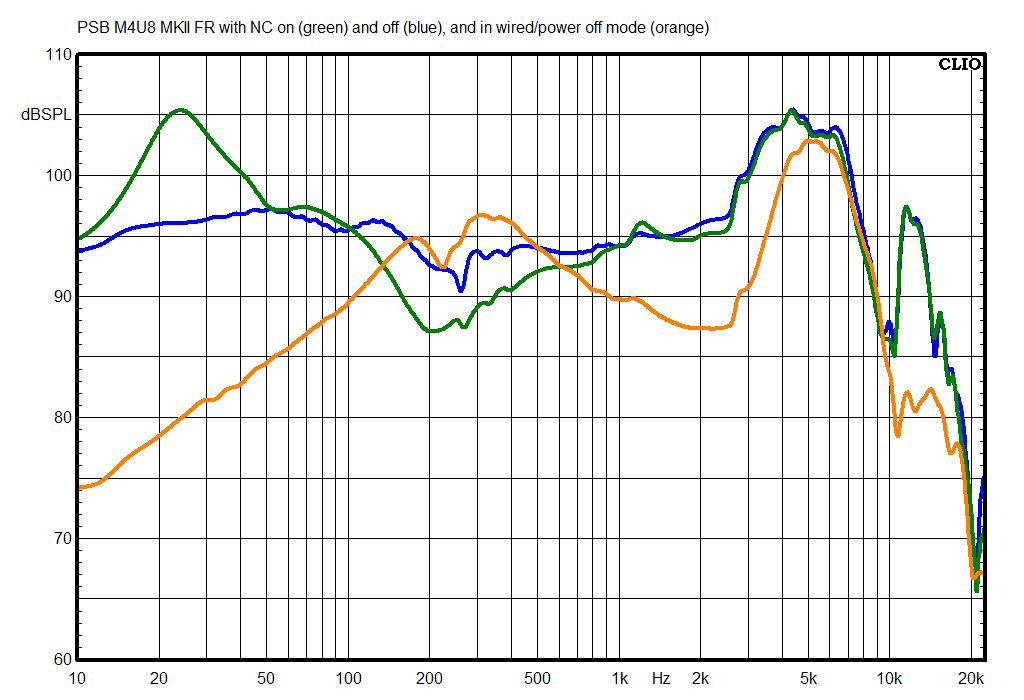 Here we can see the difference in response between noise canceling on and off, and the Bluetooth connection and the wired connection (which can be either purely passive, or used with the internal amp on and noise canceling on or off). Noise canceling introduces an upper-bass dip (which is probably why I perceived it as sounding brighter), and a large peak centered at 32Hz, which won’t be very, if at all, audible with most music. 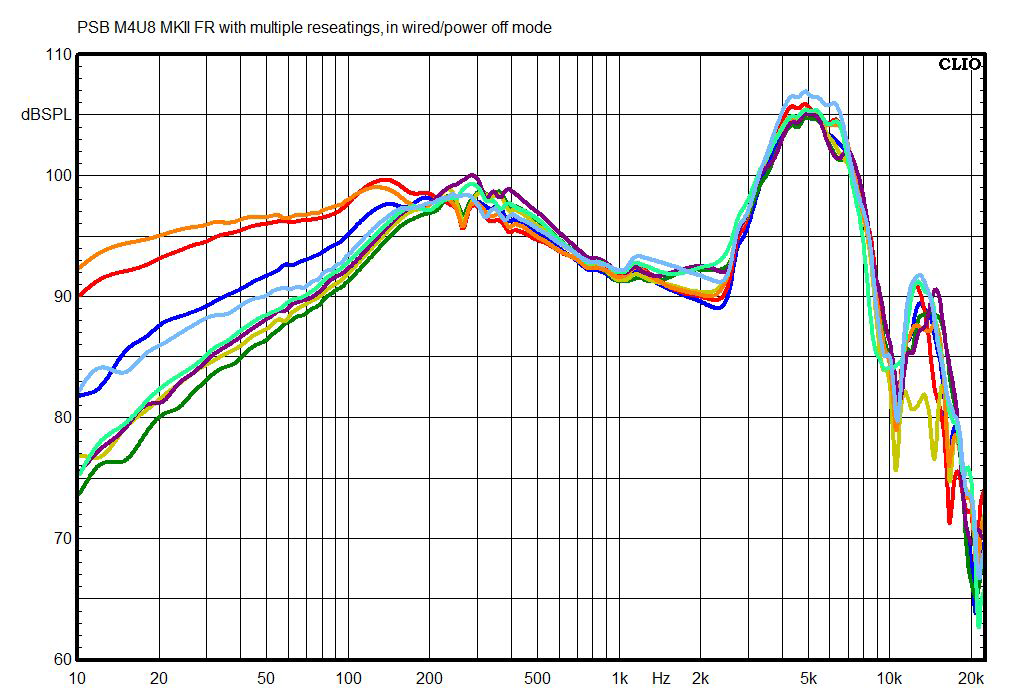 This measurement shows how sensitive the headphones’ response is to the headphones’ position on the ears. The black line shows the curve I found to be the most typical. For the other curves, I reseated the headphones a few times, and also shifted them about 5mm up, down, forward, and back on the cheek plate. Above 200Hz, the variance is negligible. Below 200Hz, the differences are large, which means the bass response of these headphones is especially sensitive to positioning—probably due to the small earpads, which make this more of a semi-on-ear design rather than a full over-ear design. 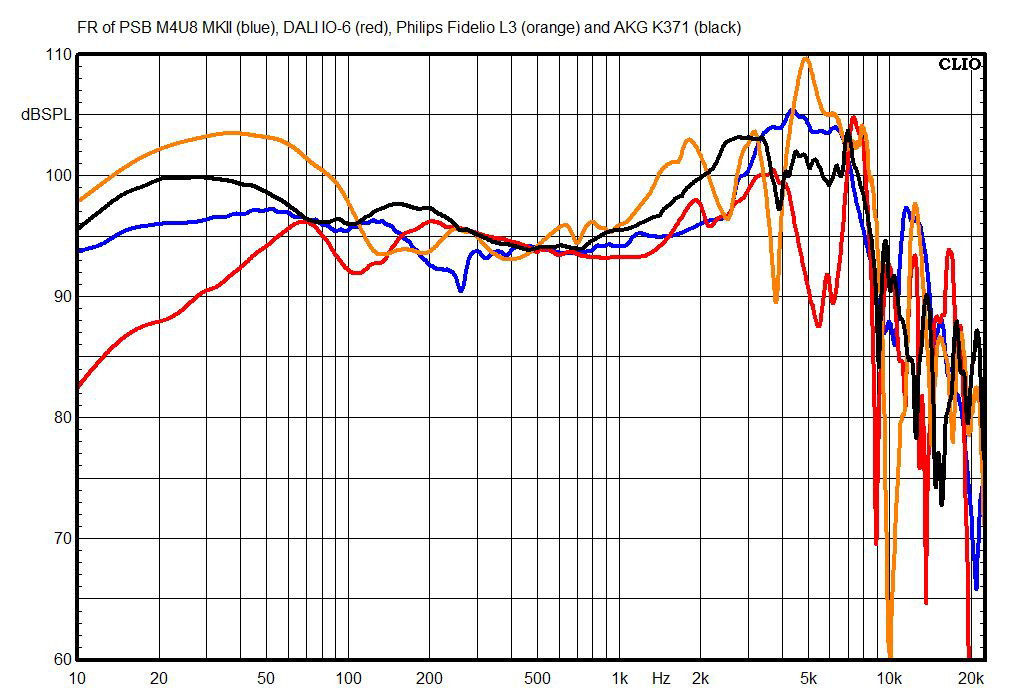 This chart shows the M4U 8 MKIIs’ right-channel response in Bluetooth mode with noise canceling off, compared with the DALI IO-6 (in the same mode), the Philips Fidelio L3 (ditto), and the AKG K371 headphones. The K371 are said to be very close to the Harman curve. Other than having comparatively less output around 2kHz, the M4U 8 MKIIs look pretty conventional. 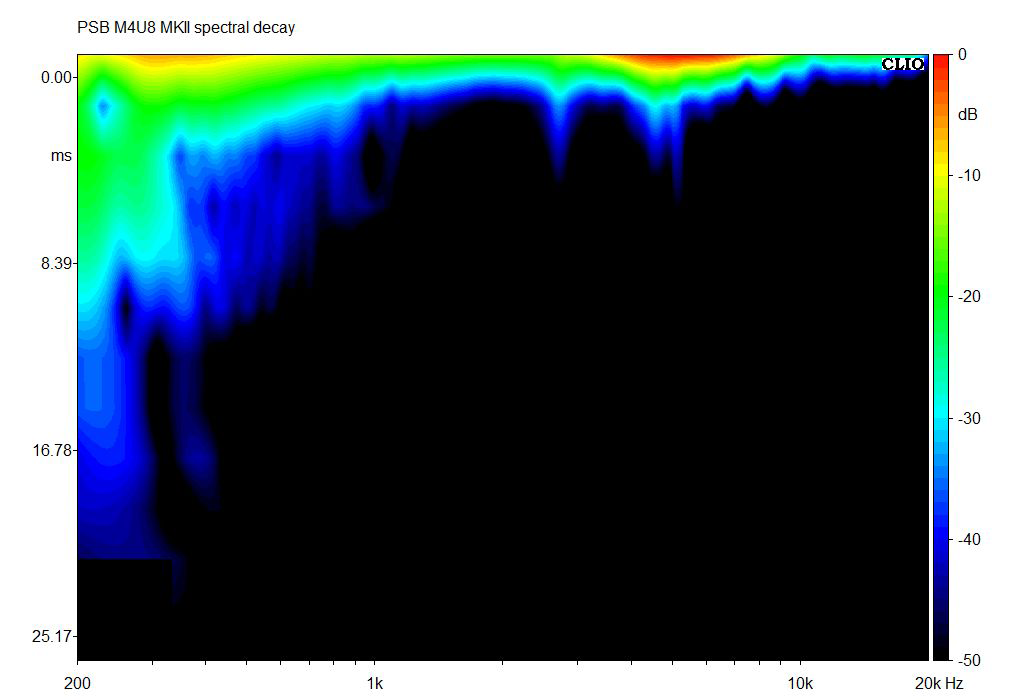 The M4U 8 MKIIs’ right-channel spectral-decay plot (measured with the wired connection) shows no noteworthy resonances except just a bit in the upper bass, around 200Hz (the lowest frequency at which this particular measurement works). 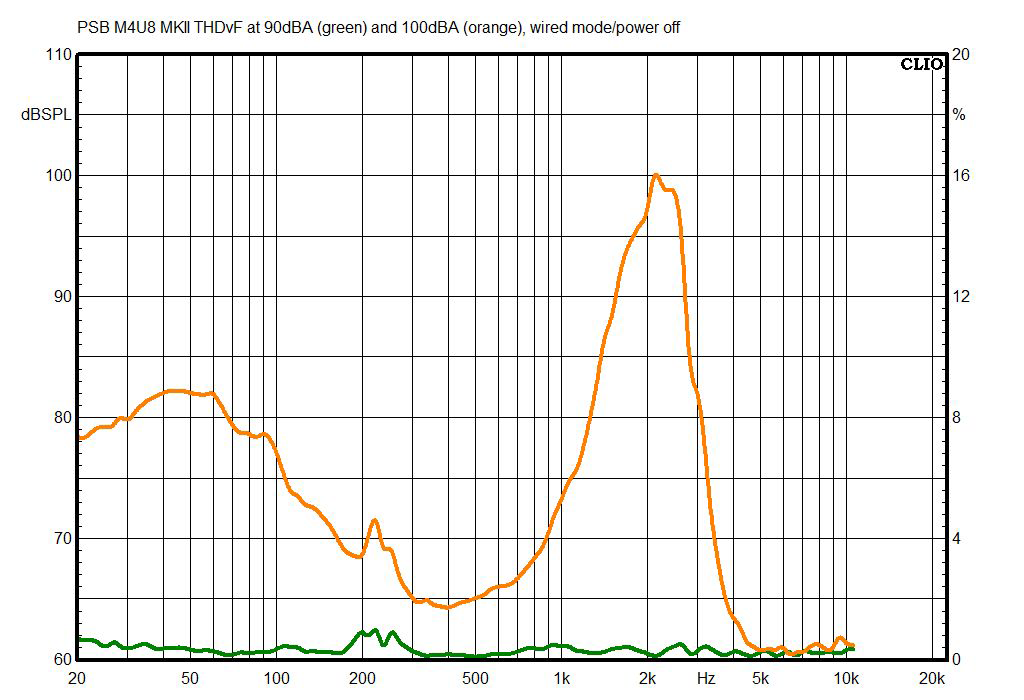 Here’s the THD vs. frequency chart, measured using the wired connection (with the power off) at 90dBA and 100dBA (both levels set with pink noise). Distortion’s almost non-existent at 90dBA, but it gets pretty high at 100dBA. Doing the same measurement with Bluetooth pushed the distortion a little bit higher. Note that 100dBA is an extremely loud listening level; really, 90dBA is louder than most people can stand for long. 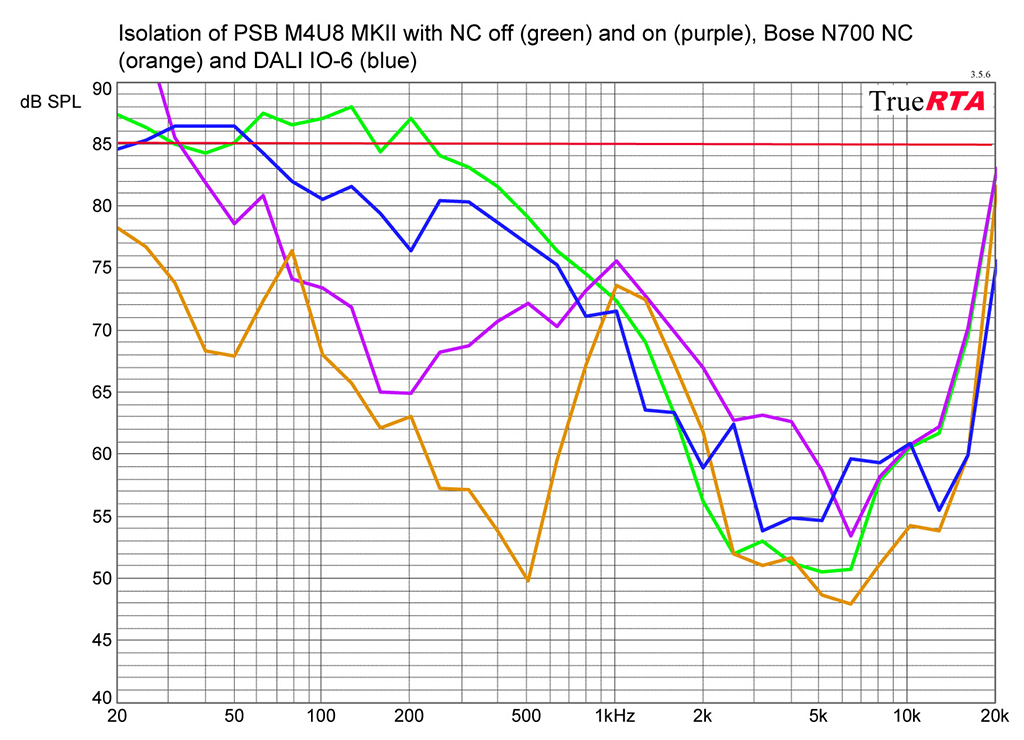 In this chart, the external noise level is 85dB SPL (the red trace), and numbers below that indicate the degree of attenuation of outside sounds. The lower the lines, the better the isolation. The M4U 8 MKIIs’ noise canceling is pretty competent, delivering a 15 to 20dB cancelation in the “airplane cabin band” between 100Hz and 1kHz, but it falls short of class leaders like the Bose N700 NC headphones. 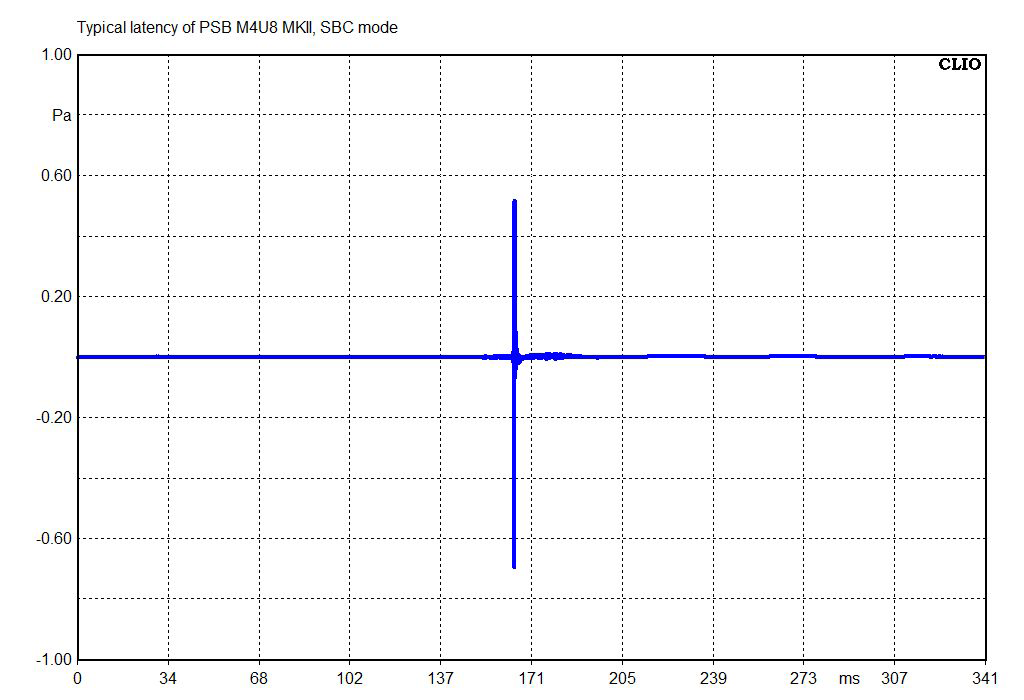 Latency, measured with a standard SBC Bluetooth connection, typically ran in the range of about 170 milliseconds, although it occasionally dipped down as low as about 110ms. 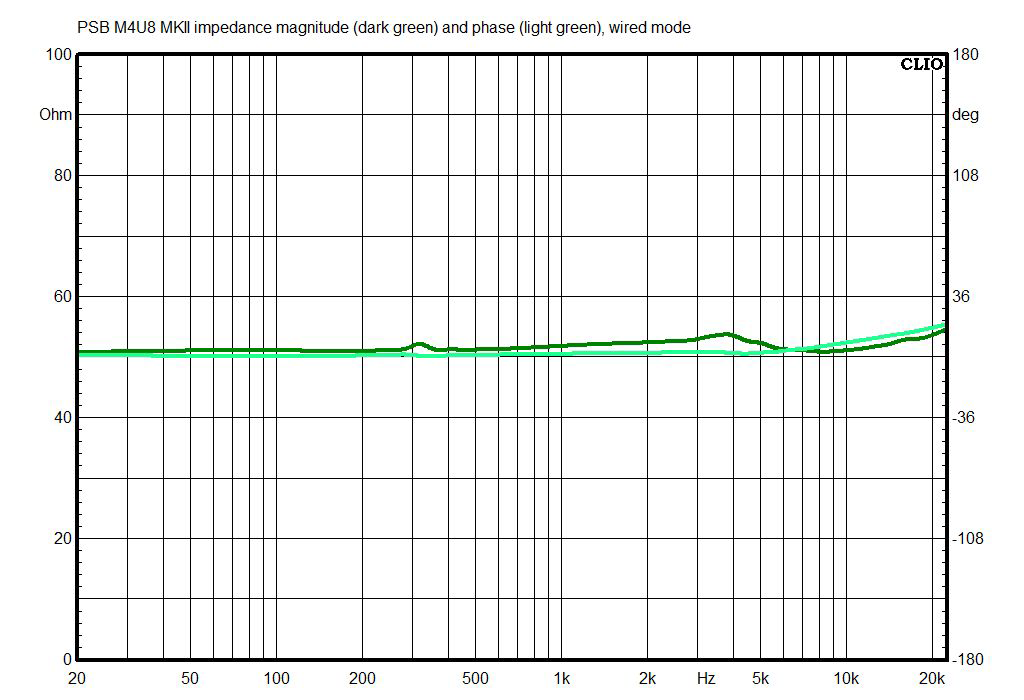 The impedance magnitude, measured in passive (power off) mode, is flat, measuring 50 to 53 ohms, and the phase response is similarly flat. With the power on, the impedance rises to about 20kHz, which is typical of a preamp input.

Bottom line: Nothing particularly troubling here—there’s nothing extraordinary about the way these headphones measure, and nothing really anomalous outside of the sharp rise in distortion at 100dBA.