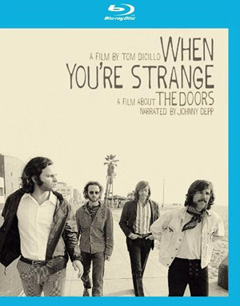 UK-based Eagle Rock Entertainment has purchased the rights for The Doors's When You’re Strange: A Film About The Doors from Rhino Entertainment and will release the film on DVD and Blu-ray on June 29. The film had its theatrical debut on April 9, 2010.

The documentary uncovers historic and previously unseen footage of the illustrious rock band and provides new insight into the impact of its music and legacy. Directed by award-winning writer/director Tom DiCillo and narrated by Johnny Depp, the film is an account of the band’s history. Produced by Wolf Films/Strange Pictures, in association with Rhino Entertainment, the 90-minute film is the first feature documentary about The Doors. Additional credits for the film include producers Peter Jankowski, Dick Wolf, John Beug and Jeff Jampol.

Terry Shand, chairman of Eagle, said, “We are delighted to continue our visual programming connection with The Doors and to build further on our cooperation with Rhino.”

Mike Carden, president of North America operations, said, “We are very excited about marketing this film and will work hard with our sales and distribution partners to promote the DVD as well as work closely with Rhino to cross-promote the soundtrack album.”