I measured the Grado RS2x headphones using laboratory-grade equipment: a GRAS Model 43AG ear/cheek simulator/RA0402 ear simulator with KB5000/KB5001 simulated pinnae, and an Audiomatica Clio 12 QC audio analyzer. For isolation measurements, I used a laptop computer running TrueRTA software with an M-Audio MobilePre USB audio interface. For most measurements, the headphones were amplified using a Musical Fidelity V-CAN amplifier; I used a Schiit Magnius amplifier for distortion measurements. These are “flat” measurements; no diffuse-field or free-field compensation curve was employed. If you’d like to learn more about what our measurements mean, click here. 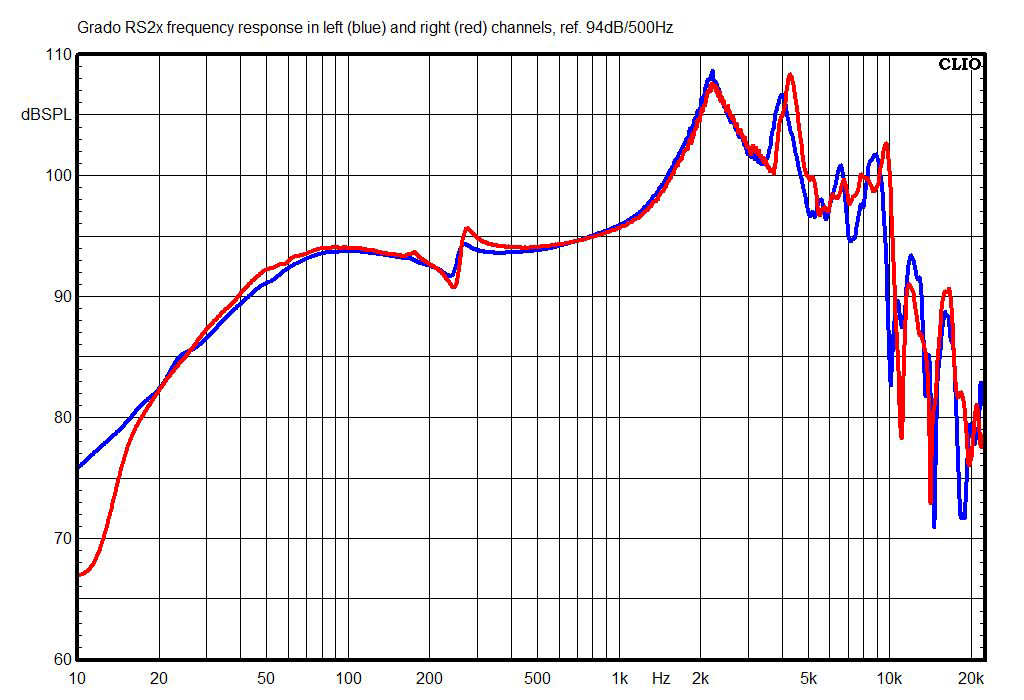 This chart shows the RS2xes’ frequency response. It’s quite unusual. There’s not much bass. There’s an unusual cancellation/reinforcement peak in the 250Hz region, although its bandwidth is narrow enough that it probably won’t be very audible. Now up to the treble—we’d normally see something like a broad peak centered somewhere around 2.5 to 3kHz, followed by a narrower peak centered at maybe 6 or 7kHz. But here we see narrow, high-Q peaks at 2.2 and 4kHz, followed by a broad lift between 7 and 10kHz. What’s that sound like? Hard to say without having heard more headphones that measure like this, but it’s definitely going to be trebly. 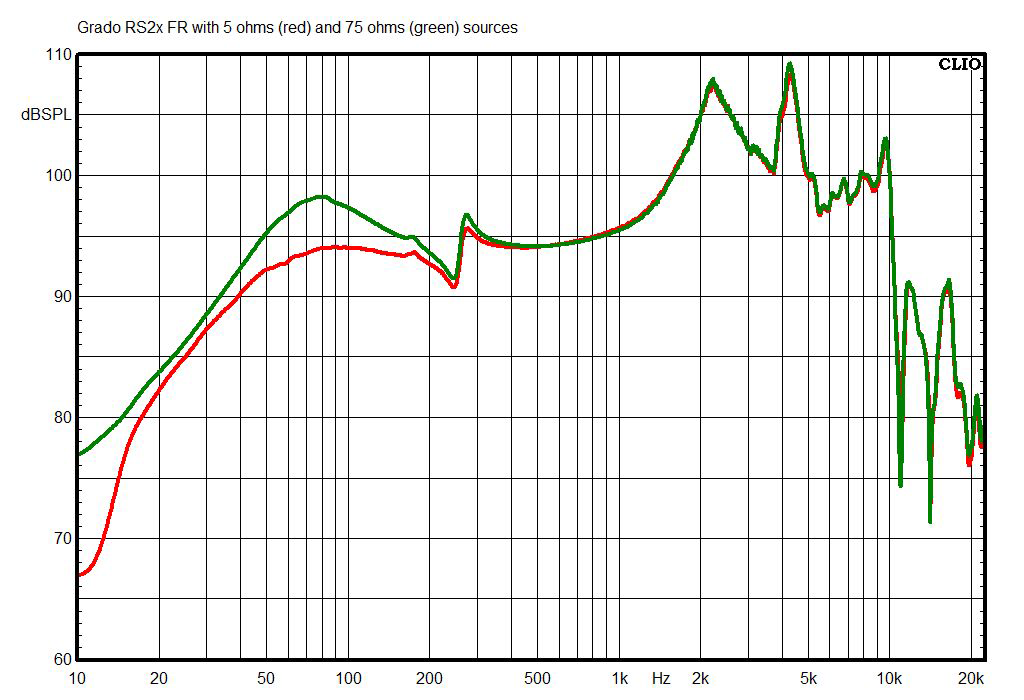 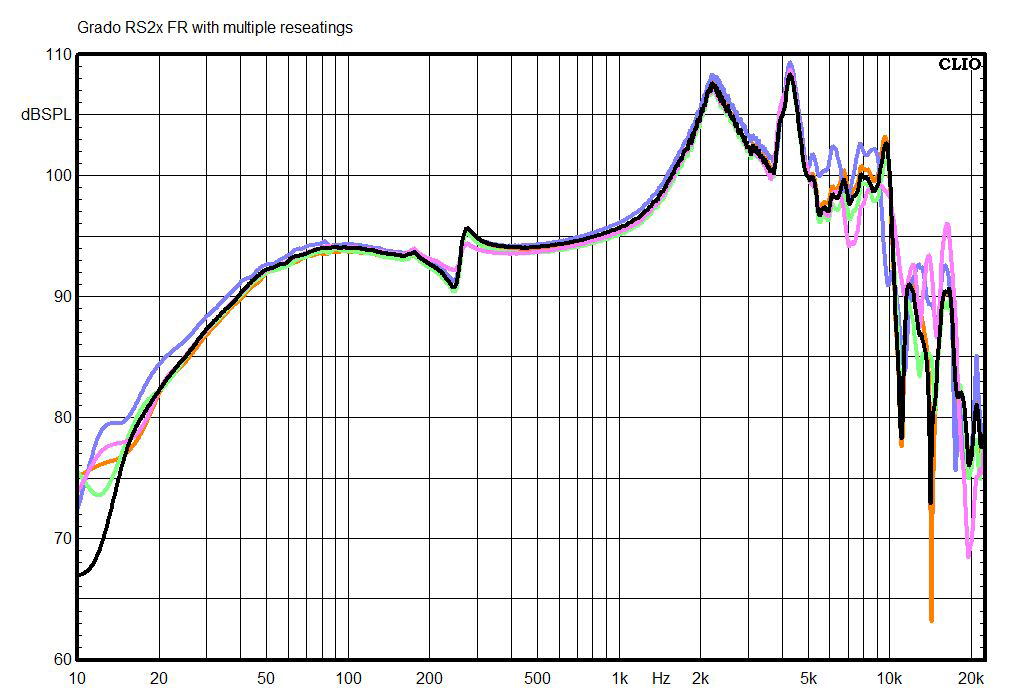 This new measurement shows how sensitive the headphones’ response is to the headphones’ position on the ears. The black line shows the curve I used above, which I found to be most typical; the other curves are taken with the headphones moved about 5mm up, down, and to each side. As expected with open-back headphones that use highly porous earpads, positioning of these on the ears isn’t very critical. 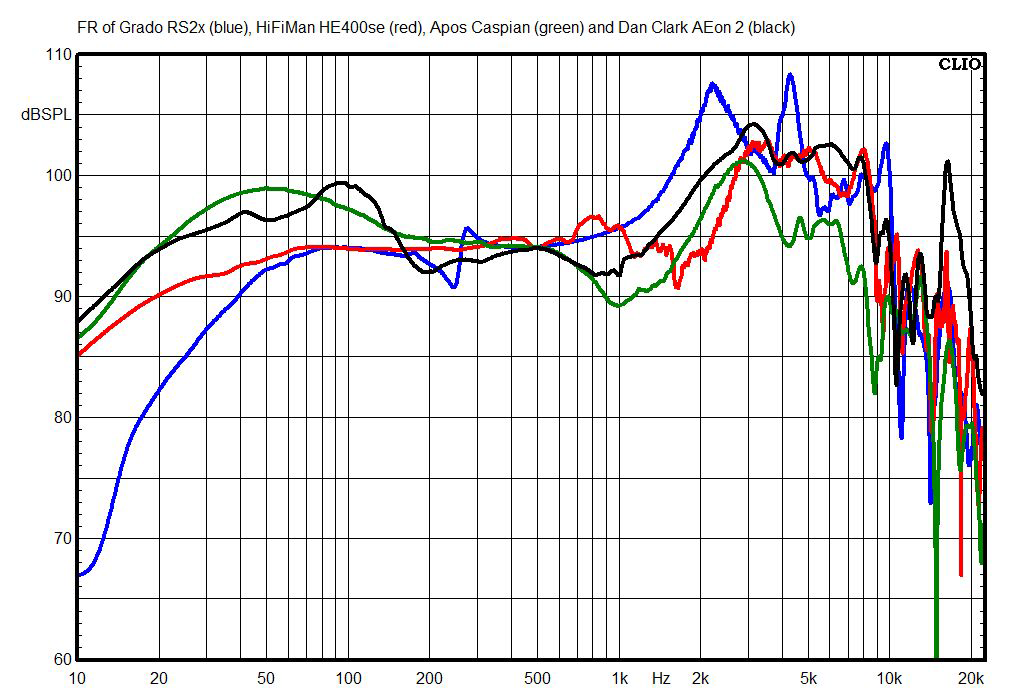 This chart shows the RS2xes’ right-channel response compared with a few other open-back models (including the Dan Clark Audio Æon 2s with perfed pads, which are the planar-magnetic headphones I’ve found come closest to the Harman curve). Clearly, the RS2x headphones have more overall treble energy and a lot less bass than the others. 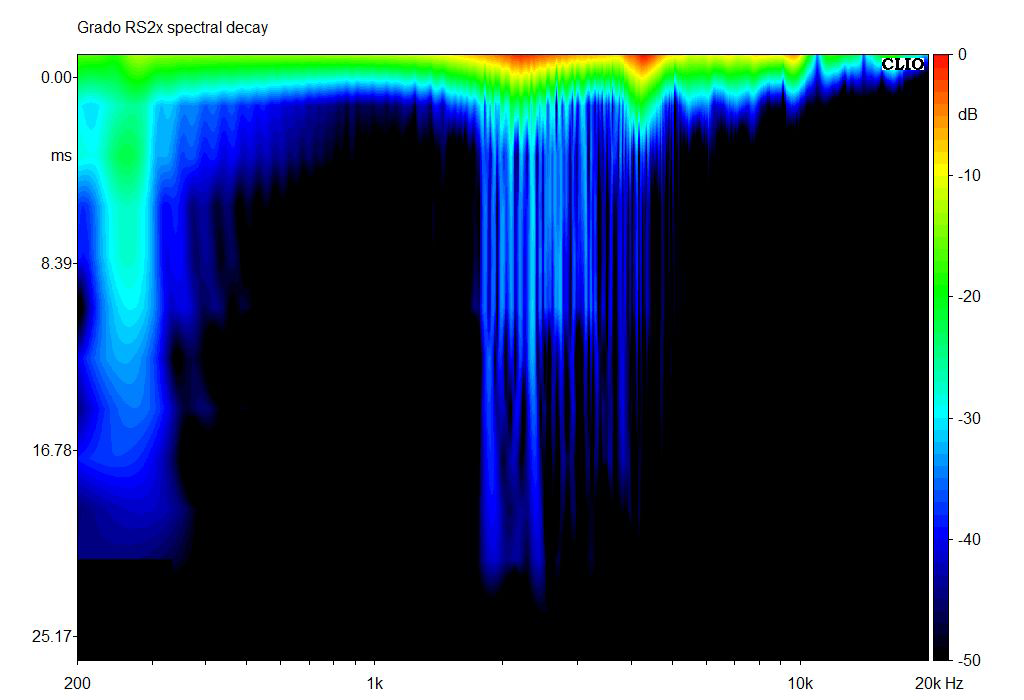 That “hash”—a series of very high-Q resonances—between 2 and 4kHz is pretty standard for open-back headphones; I think it’s part of what gives them a more spacious sound. Notice also the big resonance around 250Hz—the same spot where that cancellation/reinforcement dip/peak appears in the frequency response. Maybe that peak and dip are more audible than I expected. 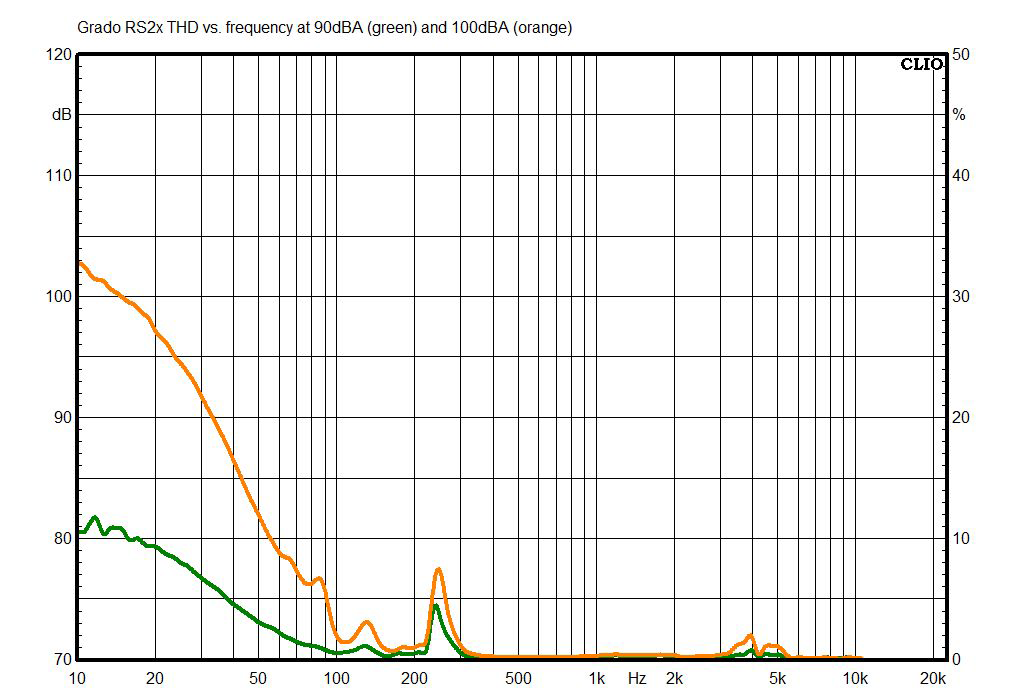 This chart shows the total harmonic distortion, measured at 90dBA and 100dBA (both levels set with pink noise). The distortion here is very high in the bass; I normally don’t get too concerned about distortion, but I wouldn’t recommend these for anyone who listens to music with lots of deep bass, or who likes to play their headphones loud. 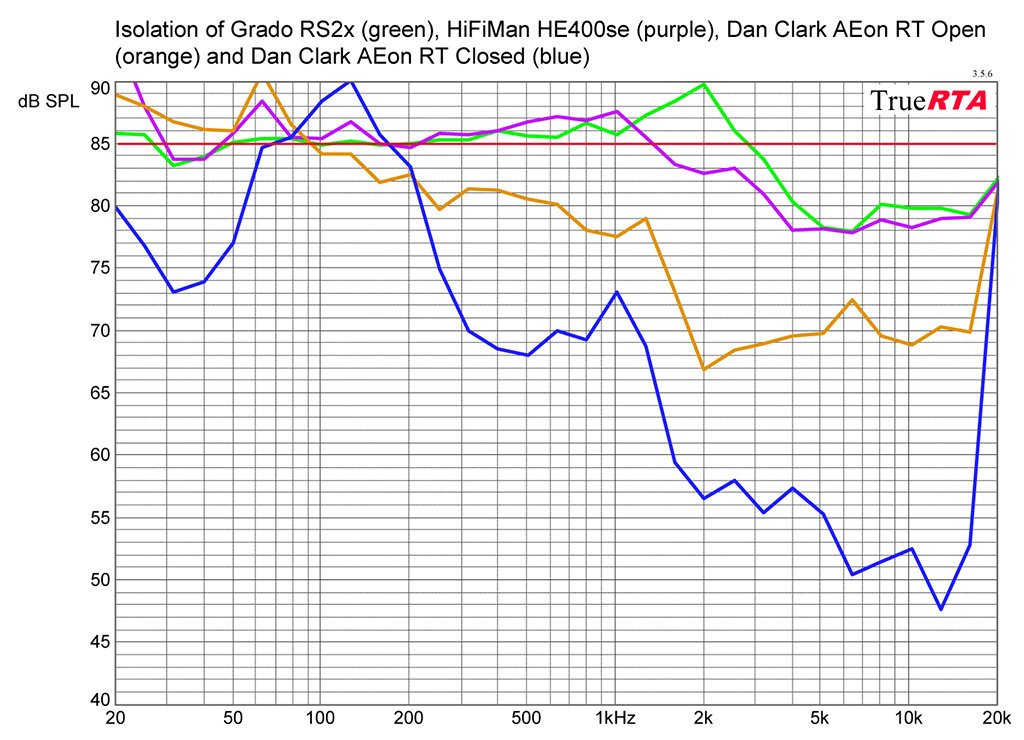 In this chart, the external noise level is 85dB SPL (the red trace), and numbers below that indicate the degree of attenuation of outside sounds. The lower the lines, the better the isolation. Like most open-back headphones, the RS2xes don’t offer much isolation. 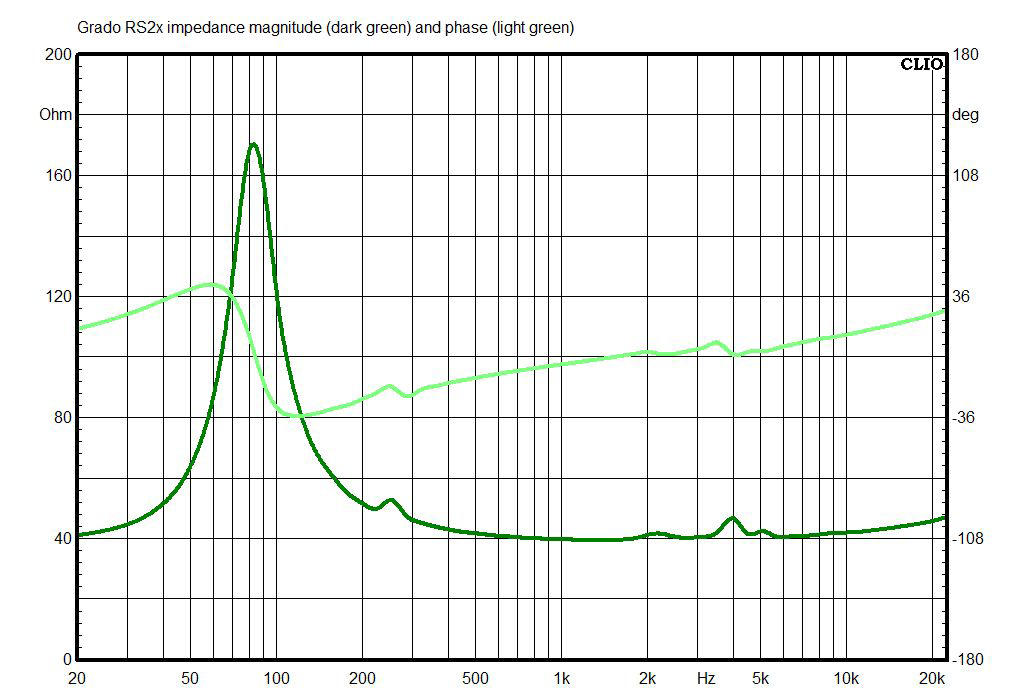 The impedance runs between 40 and 45 ohms through most of the audio range, but with a peak at the driver resonance at 82Hz. There’s a big phase swing at that frequency, too. That’s why the bass response changes so much with a high-impedance source.

Sensitivity of the RS2x headphones, calculated for 38 ohms rated impedance and averaged from 300Hz to 3kHz, is 107.1dB, so any source device should be more than ample to drive these.

Bottom line: If you’re technically minded when it comes to headphones, there are some red flags here—a treble-heavy, bass-shy frequency response and a lot of distortion.