I measured the Sendy Audio Apollo headphones using laboratory-grade equipment: a GRAS Model 43AG ear/cheek simulator/RA0402 ear simulator with KB5000/KB5001 simulated pinnae, and an Audiomatica Clio 12 QC audio analyzer. For isolation measurements, I used a laptop computer running TrueRTA software with an M-Audio MobilePre USB audio interface. For most measurements, the headphones were amplified using a Musical Fidelity V-CAN amplifier; I used a Schiit Magnius amplifier for distortion measurements. These are “flat” measurements; no diffuse-field or free-field compensation curve was employed. If you’d like to learn more about what our measurements mean, click here. 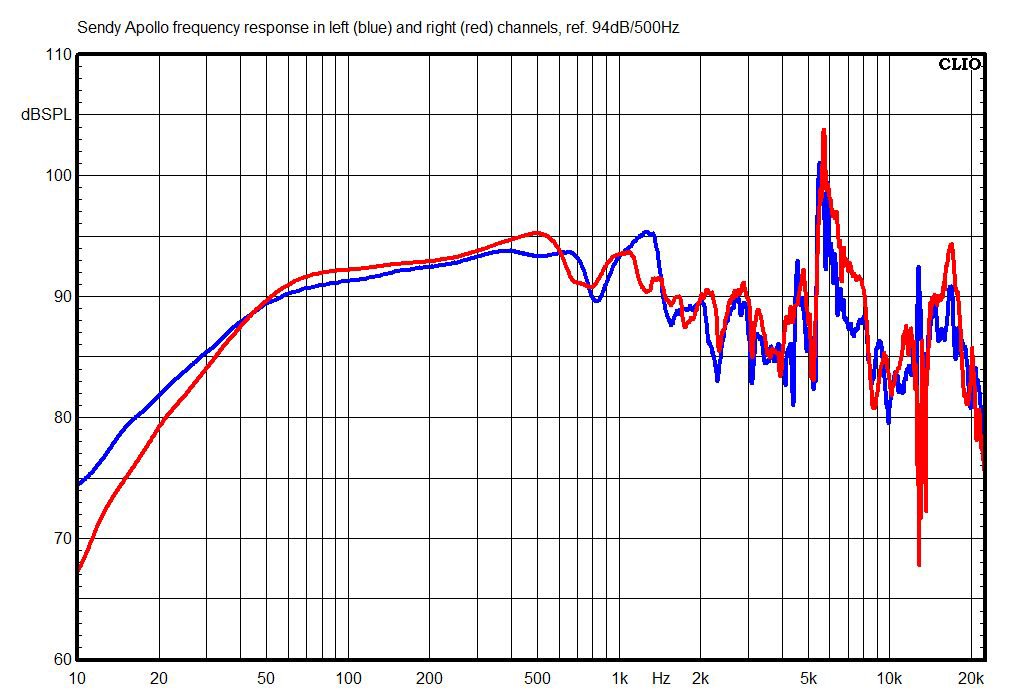 This chart shows the Apollos’ frequency response. It’s extremely unusual; I don’t think I’ve seen a curve like this before with a set of headphones. There’s not much deep bass, the usual peak at 3kHz (which is generally thought to give headphones a sound more like that of speakers in a room) is entirely absent, and there’s a very strong, high-Q peak centered at 5.7kHz. 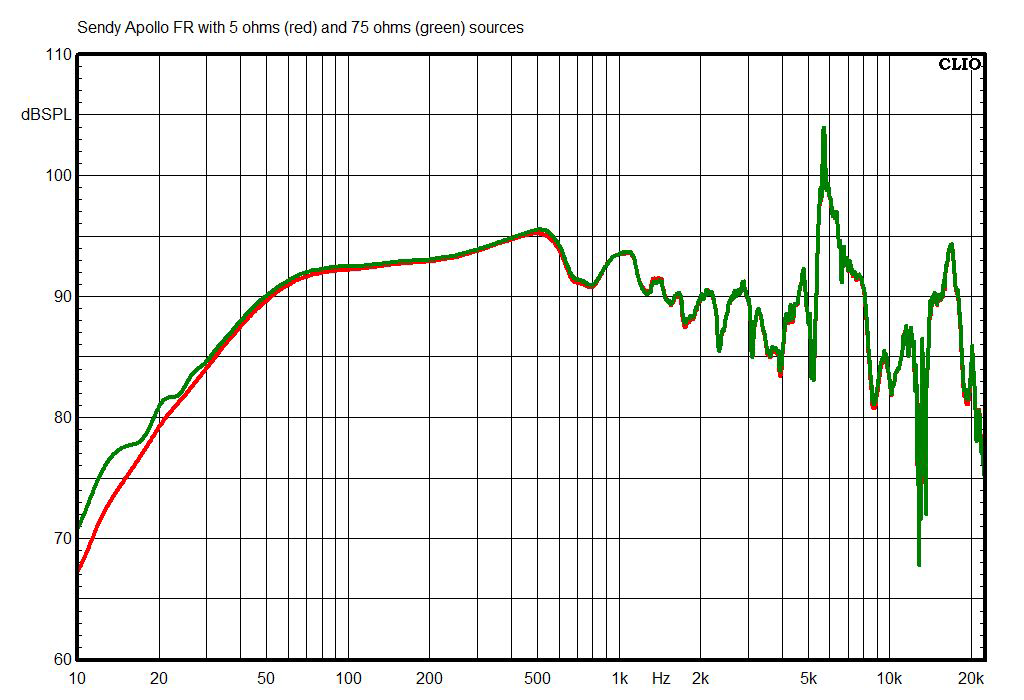 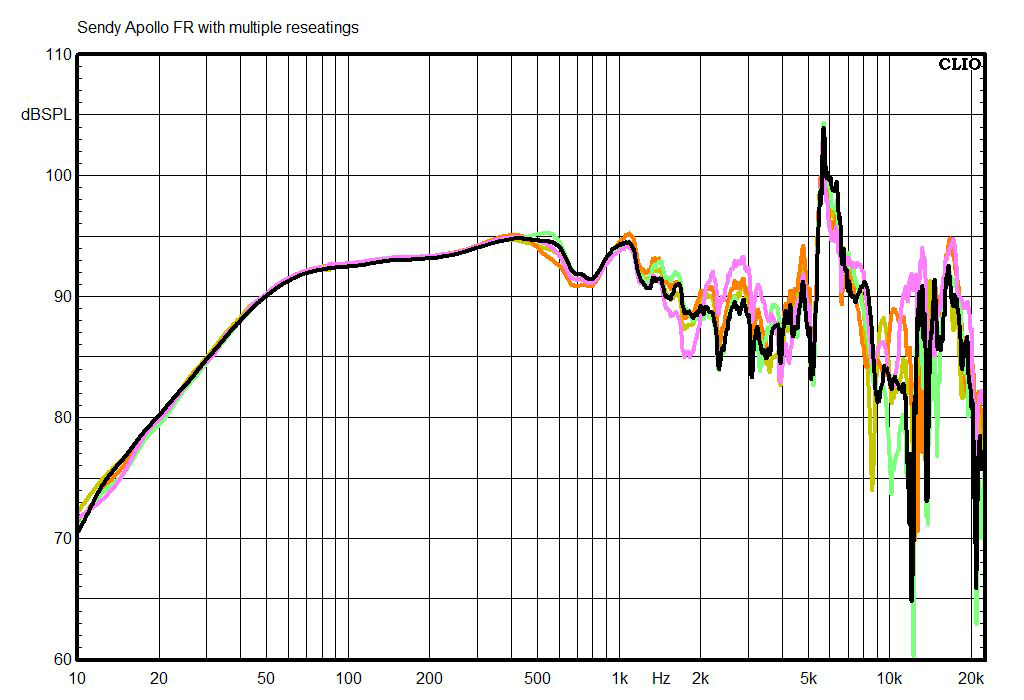 This is a new measurement I’m adding, to show how sensitive the headphones’ response is to positioning on the ears. The black line shows the curve I used above, which I found to be most typical; the other curves are taken with the headphones moved about 5mm up, down, and to each side. Because of the wide, soft earpads, the seal of the headphones is consistent, so bass response really doesn’t vary at all. The variance in the higher frequencies is normal—high-Q resonances that shift in frequency with position, and aren’t very audible. 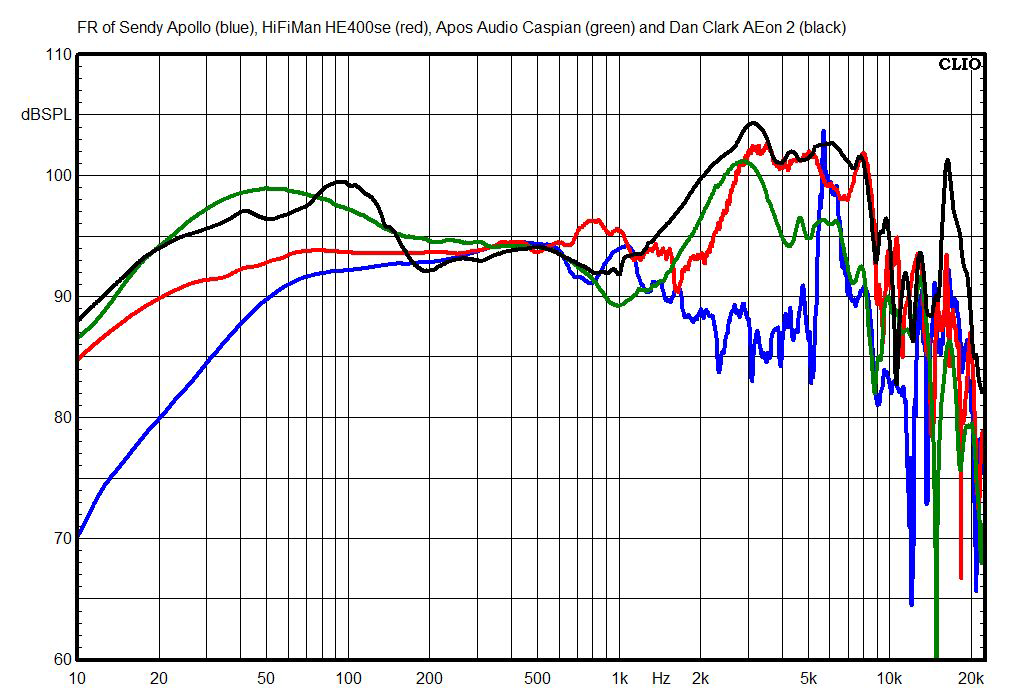 This chart shows the Apollos’ right-channel response compared with a few other open-back models (including the Dan Clark Audio Æon 2 headphones with perfed pads, which are the planar-magnetic headphones I’ve found come closest to the Harman curve). It’s obvious that the Apollos are way off the norm. 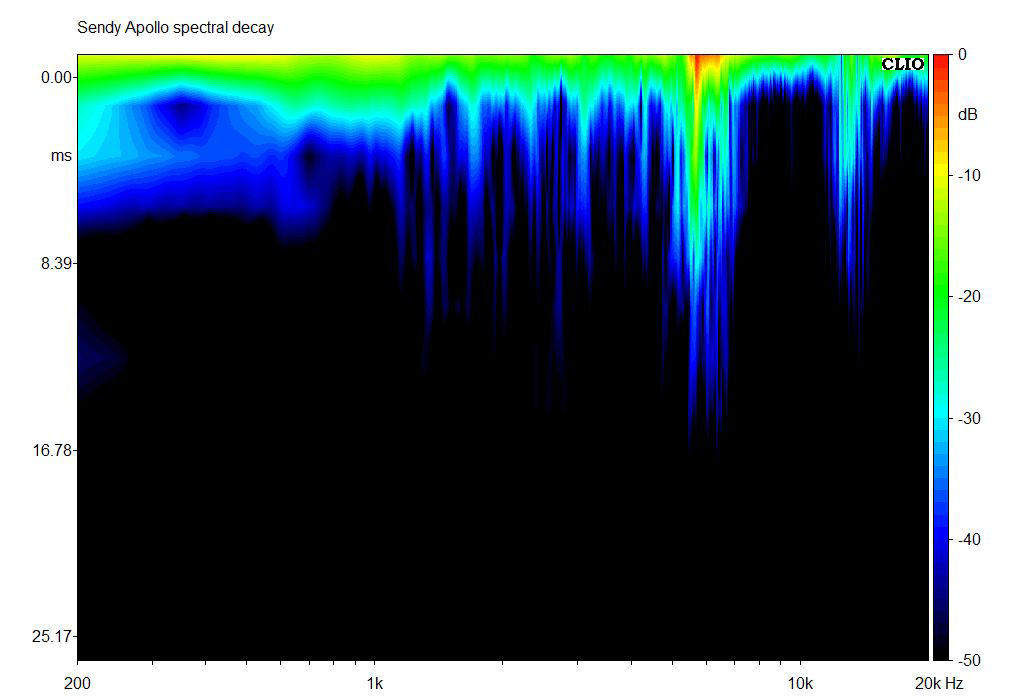 The “hash” above 1kHz in the Apollos’ right-channel spectral-decay plot is common for open-back planar-magnetic headphones, although its bandwidth is broader—which suggests to me these might have an unusually open and ambient sound. However, there’s a very strong resonance between 5 and 6kHz that corresponds precisely with the big peak in the frequency-response measurements, and I’d guess that’s audible, depending on the high-frequency content of whatever you’re listening to. 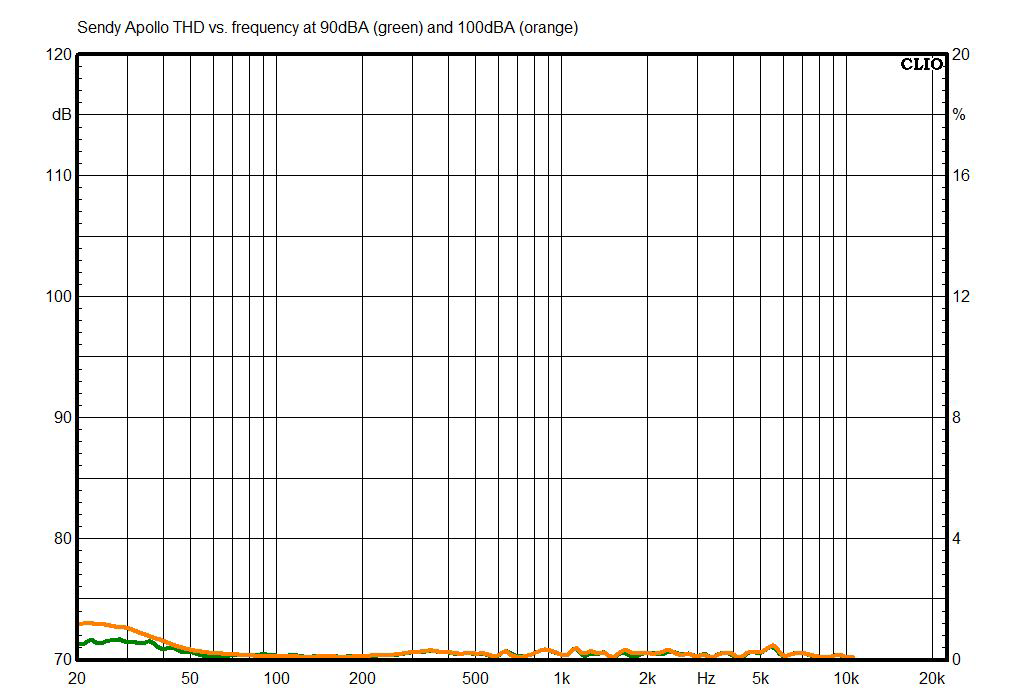 Here’s the THD vs. frequency chart, measured at 90dBA and 100dBA (both levels set with pink noise). The distortion here is very low and totally inaudible even at high levels. 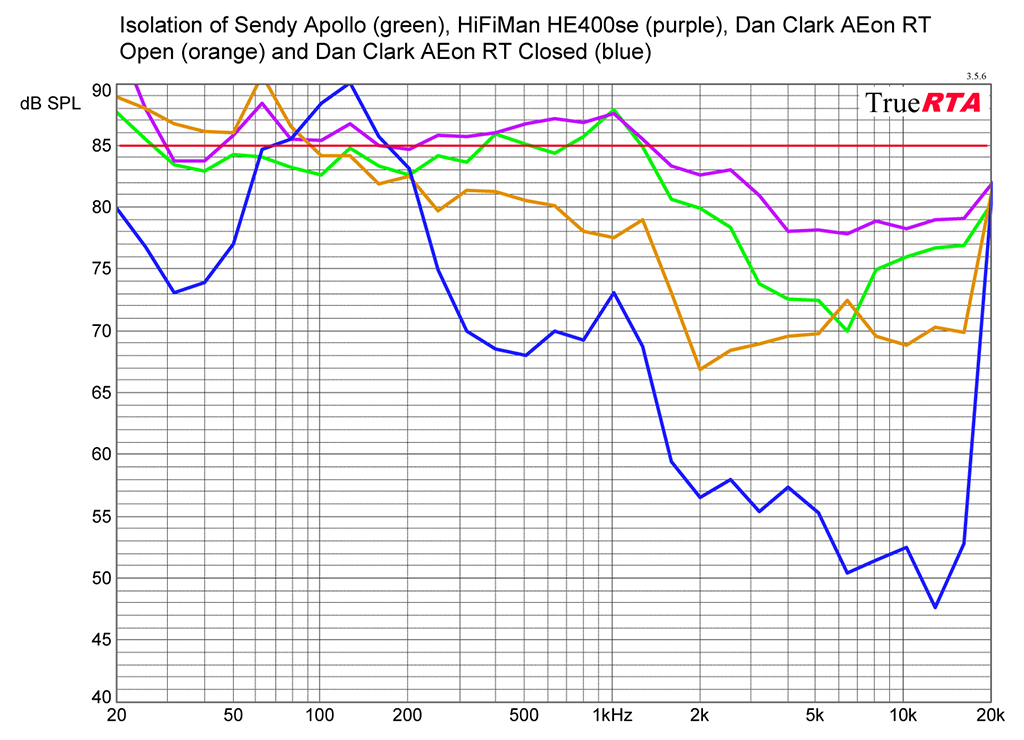 In this chart, the external noise level is 85dB SPL (the red trace), and numbers below that indicate the degree of attenuation of outside sounds. The lower the lines, the better the isolation. You can see that the Apollos’ isolation is typical for large, open-back headphones. I included the Dan Clark Audio Æon RT Closed headphones so you can see how a closed-back model compares. 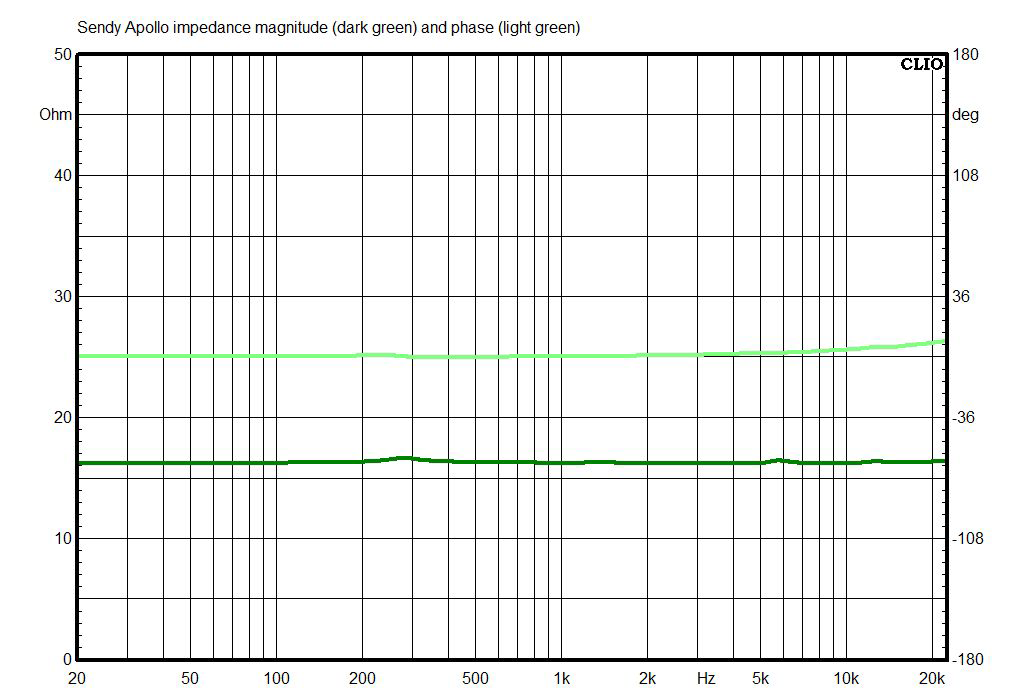 The rated impedance of the Apollo headphones wasn’t published at the time I did these measurements, but it’s basically dead-flat at 16 ohms with very little phase shift.

Sensitivity of the Apollos, calculated for 16 ohms impedance and averaged from 300Hz to 3kHz, is 95.8dB—high enough that you can get a useable volume from most sources, but low enough that you’ll want to use a DAC-amplifier or a portable music player to get the best performance from them.

Bottom line: The frequency-response plot shows that the Sendy Apollo headphones are going to have a distinctive and unusual sound. Otherwise, these measurements are fairly typical for open-back planar-magnetic headphones.