I measured the CCA C10 earphones using laboratory-grade equipment: a GRAS Model 43AG ear/cheek simulator/RA0402 ear simulator with KB5000/KB5001 simulated pinnae, and an Audiomatica Clio 12 audio analyzer. For isolation measurements, I used a laptop computer running TrueRTA software with an M-Audio MobilePre USB audio interface. The headphones were amplified using a Musical Fidelity V-CAN amplifier. I used the supplied medium-sized silicone tips for all measurements because they fit best in the ear simulator. These are “flat” measurements; no diffuse-field or free-field compensation curve was employed. If you’d like to learn more about what our measurements mean, click here. 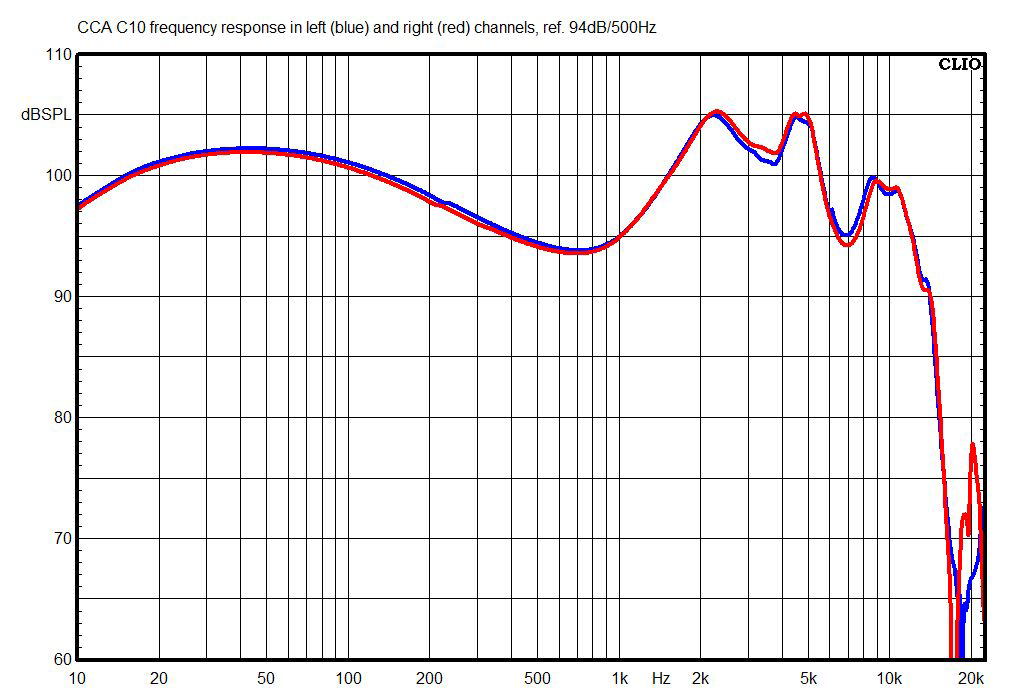 This chart shows the C10s’ frequency response. Nothing really remarkable here; it’s unlikely anyone would find the sound of these earphones idiosyncratic. I had worried that, given their very low price, we might see a significant mismatch in the response and sensitivity of the left and right earphones, but they match very well, never varying by more than about 1dB. 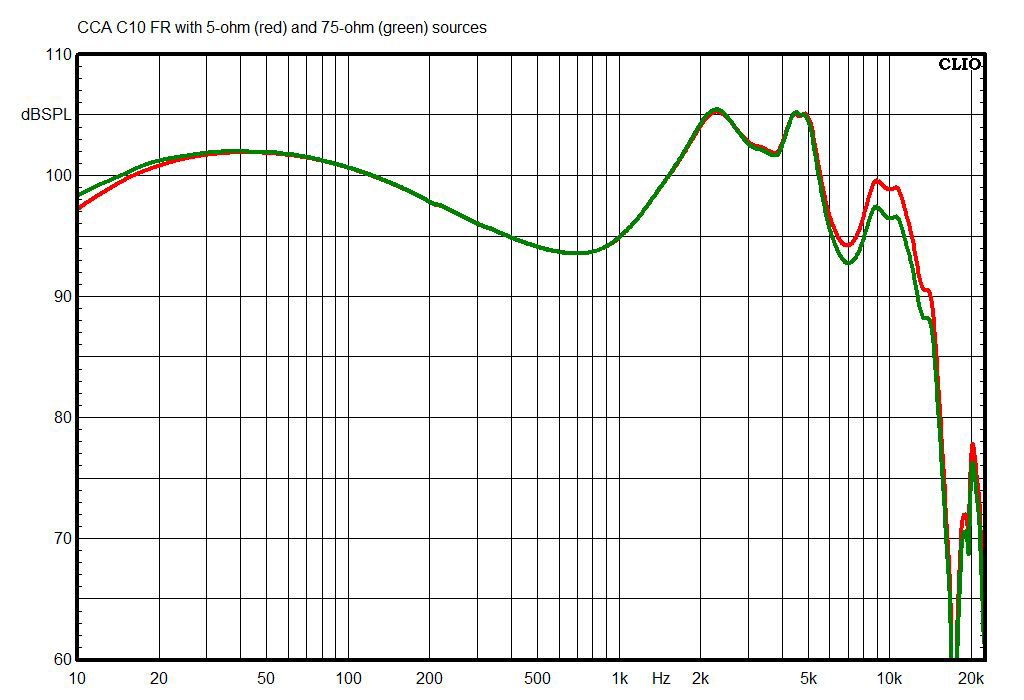 This chart shows how the C10s’ tonal balance changes when they’re used with a high-impedance source, such as a cheap laptop, some tube amps, or some professional headphone amps. As usual with balanced armatures, we see some significant differences, although in this case they’re not major—the high-impedance source produced about 1.5 to 3dB less output between 6 and 15kHz, which listeners will hear as a mild softening of the sound, but not as an unnatural coloration. 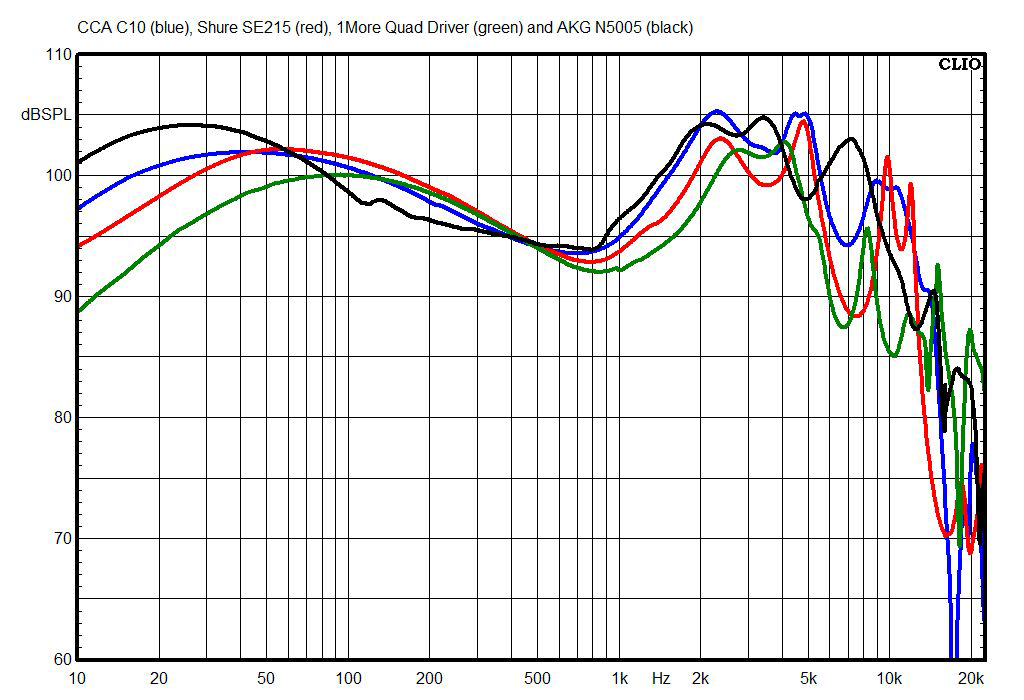 This chart shows the C10s’ right-channel response compared with various earphones, including the AKG N5005s, which are said to be the passive earphones that come closest to the Harman curve. The C10s are safely in the ballpark of “normal,” and in the mids and treble, they’re close to the Harman curve. They’re a little different in the bass, though, with 2 or 3dB more energy in the upper bass, between about 80 and 250Hz, and about 2 or 3dB less energy in the lower bass, below about 70Hz. 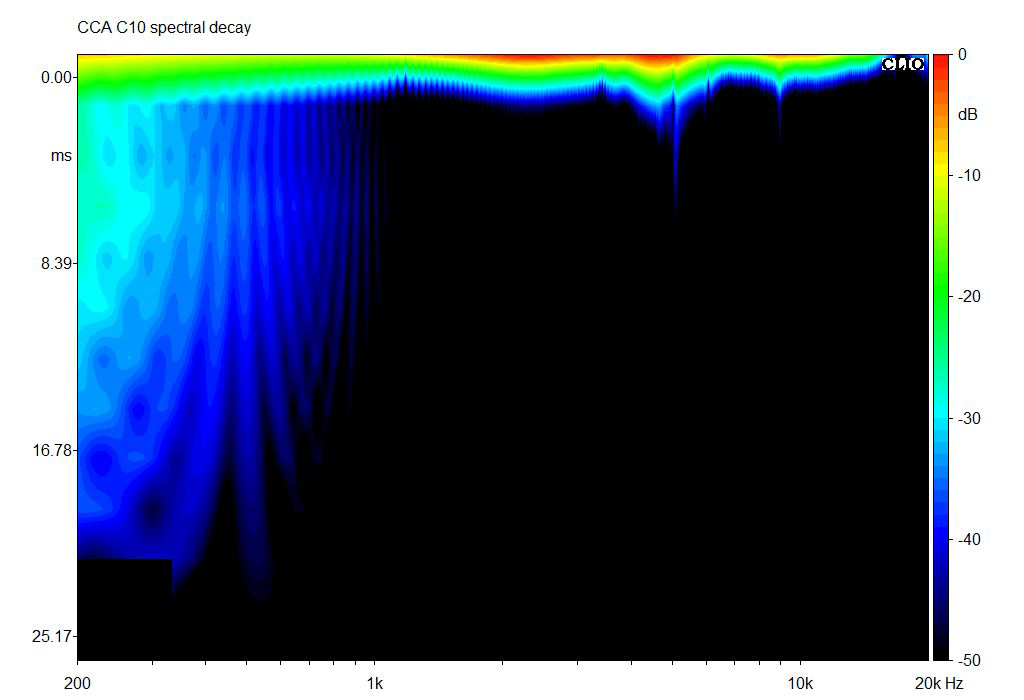 The C10s’ spectral-decay plot looks pretty clean, with no significant resonances in the mids and treble, and just a bit of bass resonance from the dynamic driver. 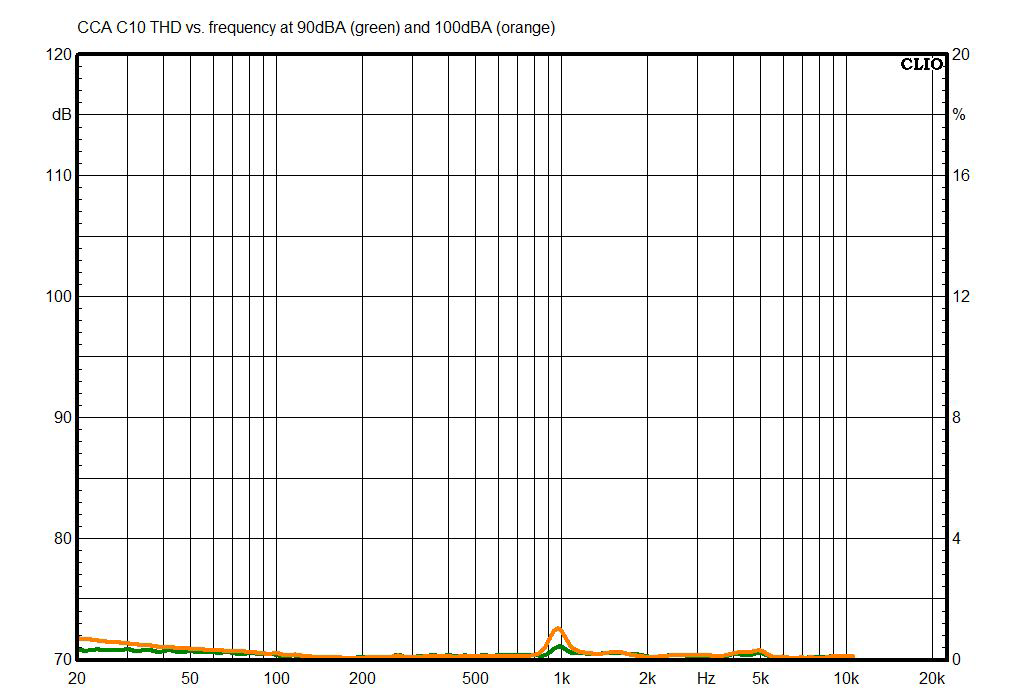 The C10s’ total harmonic distortion is pretty close to zip.

In this chart, the external noise level is 85dB SPL, and numbers below that indicate the degree of attenuation of outside sounds. The lower the lines, the better the isolation. In the 43AG ear/cheek simulator, the C10s didn’t offer quite as much isolation as some similar models with over-ear cable routing, but they still did fine, and better than most earphones with conventional, “hang from the earphone” cable routing. 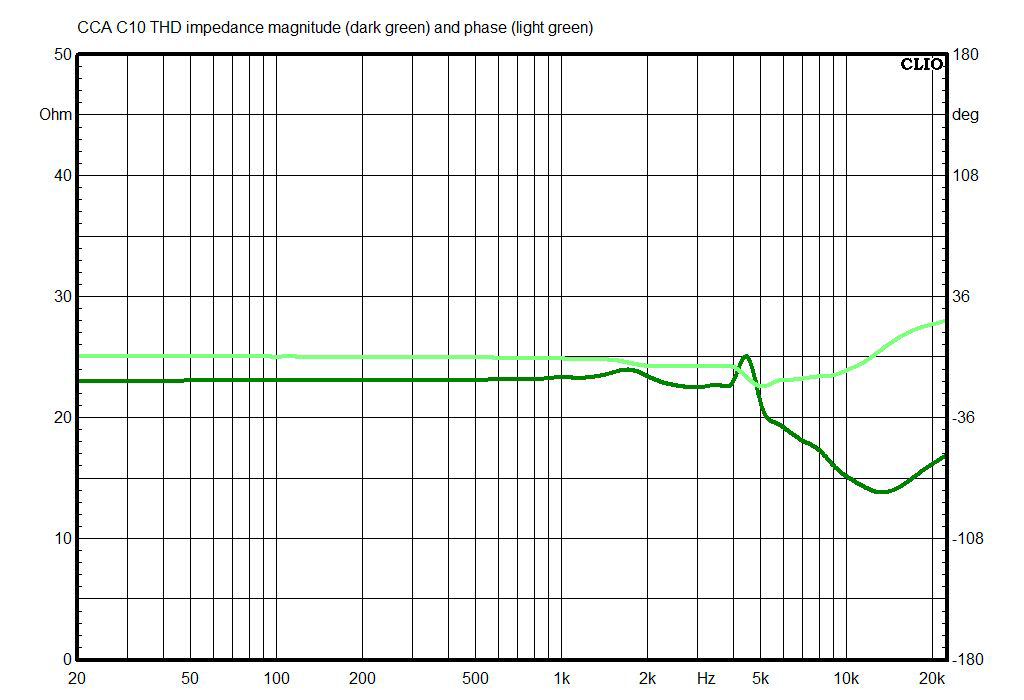 The C10s are a little unusual for earphones with balanced armatures. Normally with balanced armatures, we’d see a rise in impedance in the treble, but above about 5kHz, the impedance falls quite a bit, which is why we see the treble reduction with high-impedance sources. (The electrical phase swing is pretty mild, though.) Interestingly, the impedance is just about dead-flat up to a little over 1kHz, which leads me to guess that the dynamic driver is active up to at least 1kHz, maybe higher.

Sensitivity, measured between 300Hz and 3kHz, using a 1mW signal calculated for 32 ohms rated impedance, is 115.8dB, which means the C10s will deliver loud volume from any source device.

Bottom line: No red flags here, which is rather shocking considering the complexity and low price of this design.