I measured the Beyerdynamic DT 900 Pro X headphones using laboratory-grade equipment: a GRAS Model 43AG ear/cheek simulator/RA0402 ear simulator with KB5000/KB5001 simulated pinnae, and an Audiomatica Clio 12 QC audio analyzer. For isolation measurements, I used a laptop computer running TrueRTA software with an M-Audio MobilePre USB audio interface. For most measurements, the headphones were amplified using a Musical Fidelity V-CAN amplifier; I used a Schiit Magnius amplifier for distortion measurements. These are “flat” measurements; no diffuse-field or free-field compensation curve was employed. If you’d like to learn more about what our measurements mean, click here. 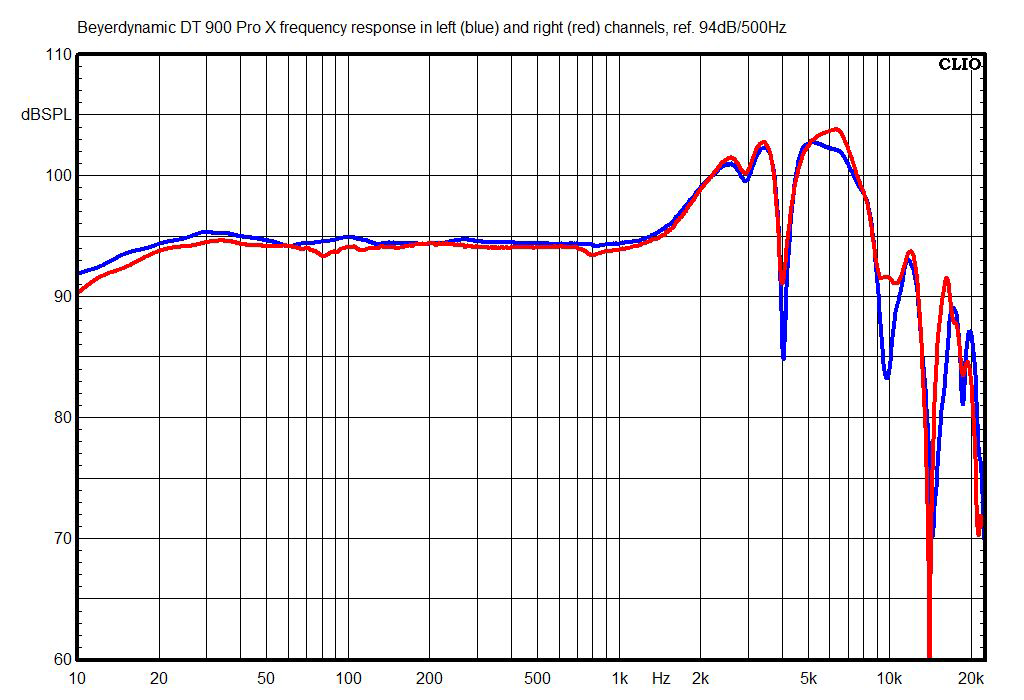 This chart shows the DT 900 Pro Xes’ frequency response. If you showed me this chart without knowing what brand the product is, I’d guess it was from HiFiMan—because it has that brand’s characteristic flat response below 1kHz, and lots of energy in the upper mids and lower treble, between 2 and 8kHz. 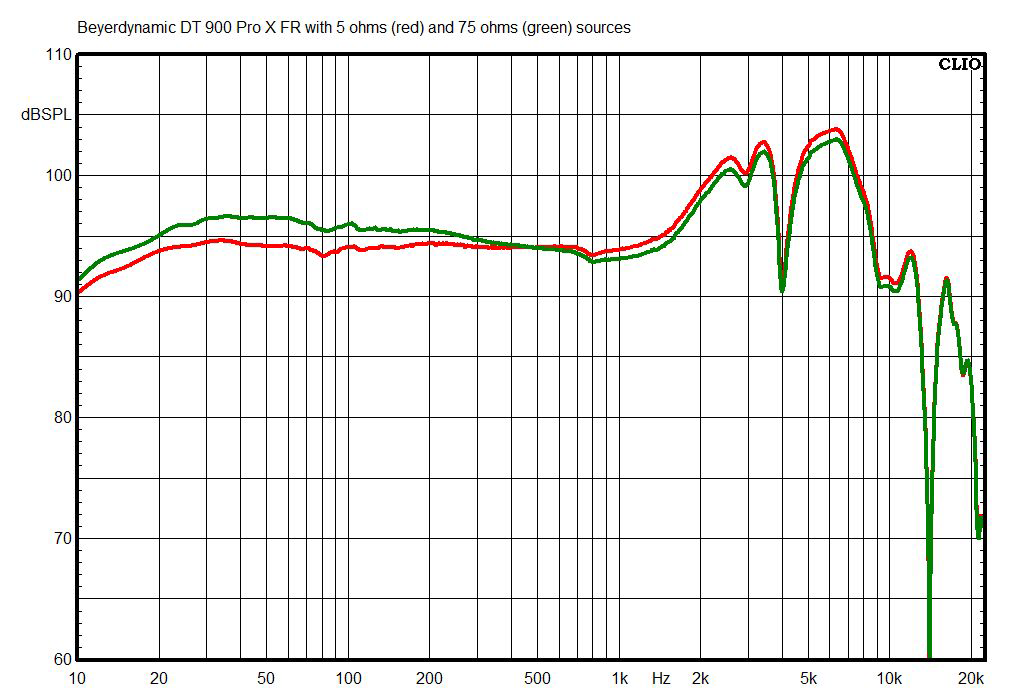 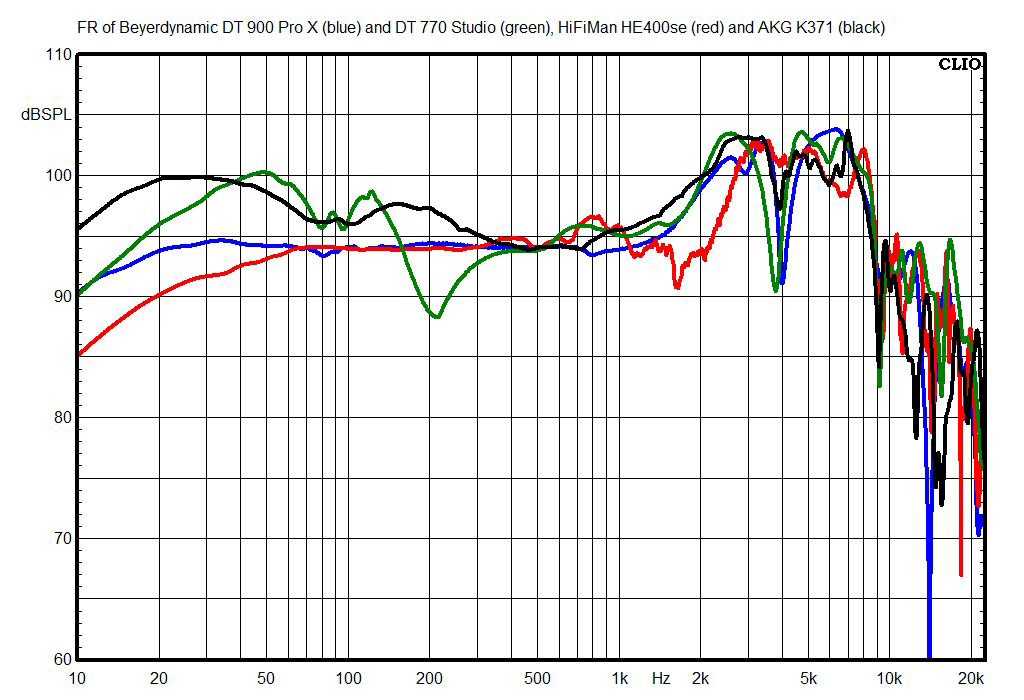 This chart shows the DT 900 Pro Xes’ right-channel response compared with a couple of other open-back models and the AKG K371s, which are said to be very close to the Harman curve. So the DT 900 Pro Xes could be said to be Harman curve headphones but with less bass, or very similar to the HiFiMan HE400se headphones, which are among the fuller-sounding HiFiMan models. 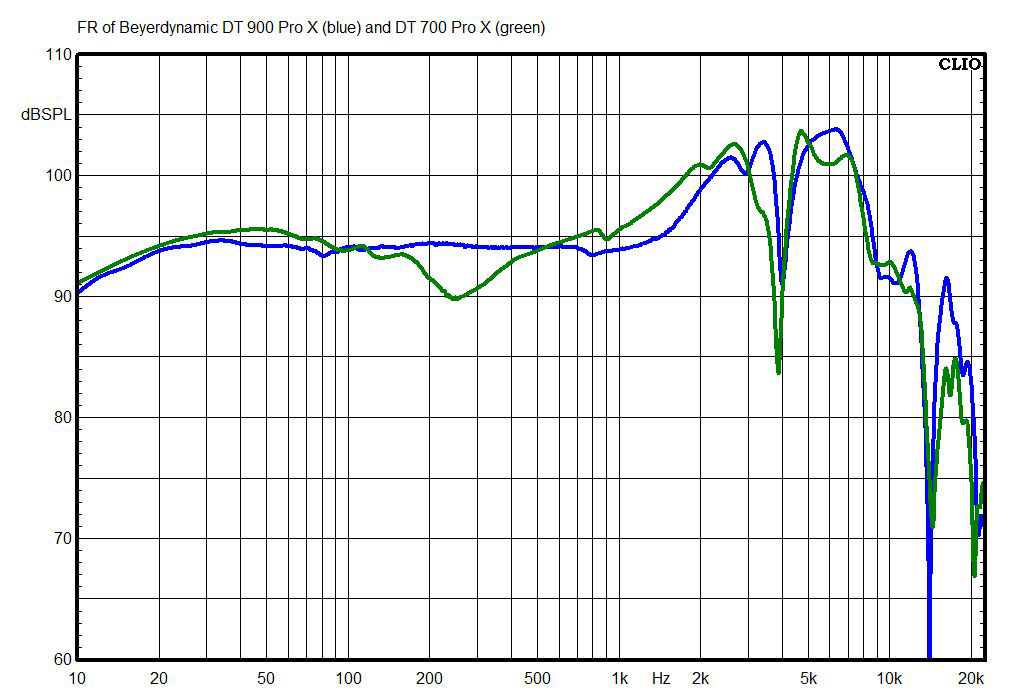 Here’s how the DT 900 Pro Xes compare with the closed-back DT 700 Pro X headphones, which I borrowed from another reviewer. The frequency response measures almost the same, although I found they sound a little more different than would appear to be the case. 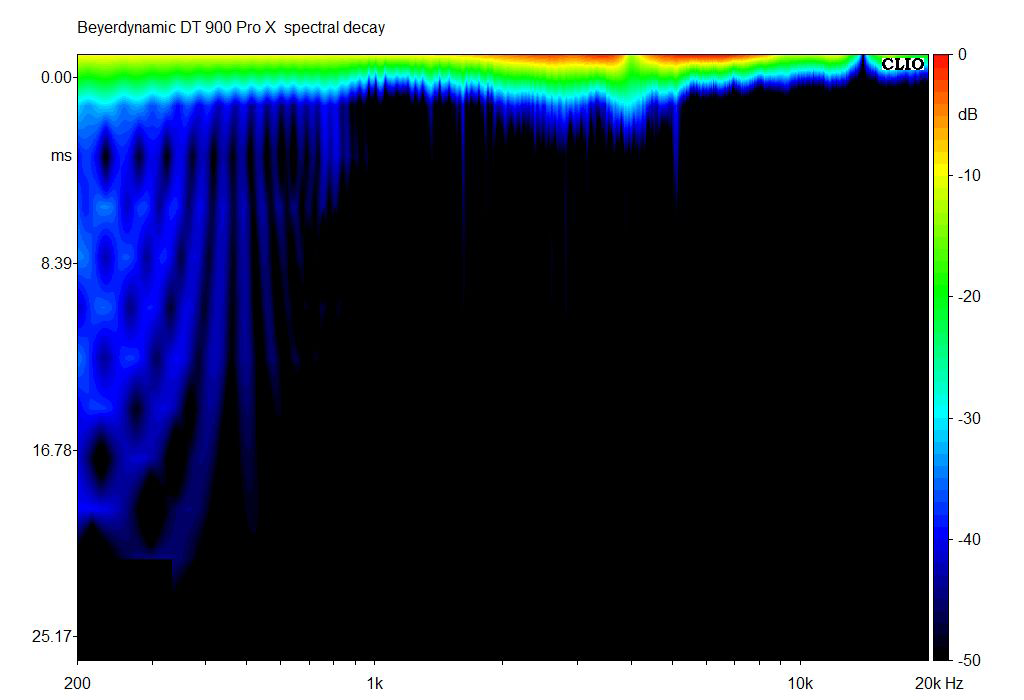 The DT 900 Pro X headphones’ right-channel spectral-decay plot looks about as clean as they get—there’s essentially no resonance here. That fancy three-layer driver seems to work as advertised. 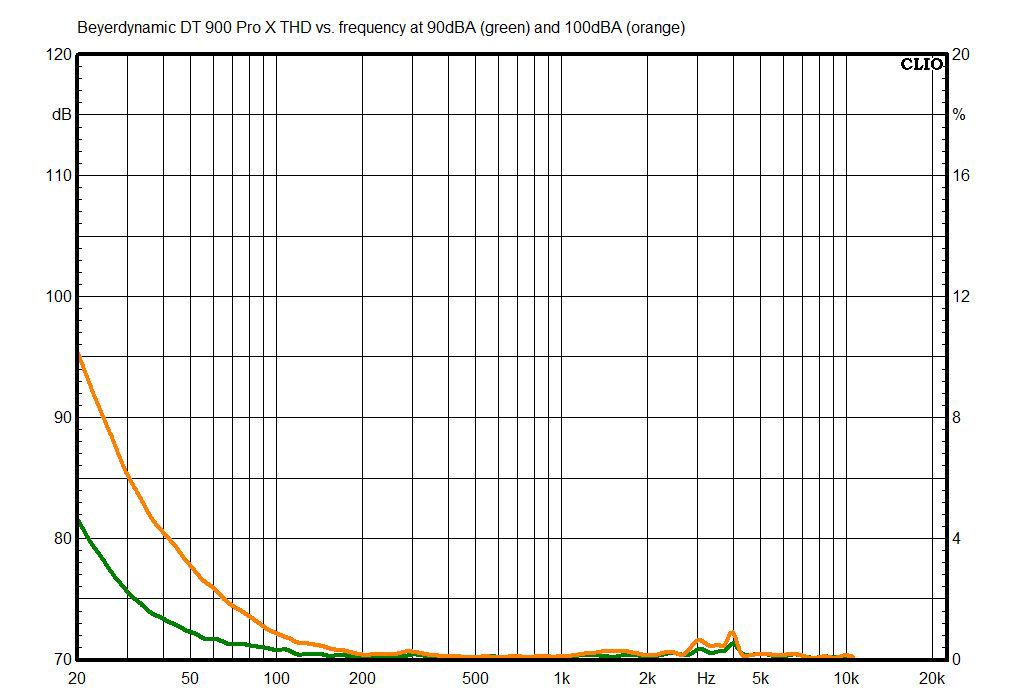 Here’s the THD vs. frequency chart, measured at 90dBA and 100dBA (both levels set with pink noise). It may look a little high in the bass, but keep in mind that all the distortion is in the bass; that the generally accepted rough guideline for audibility of subwoofer distortion is 10%, and the DT 900 Pro Xes hit that level only at 20Hz; and that this is at the unrealistically loud listening level of 100dBA. 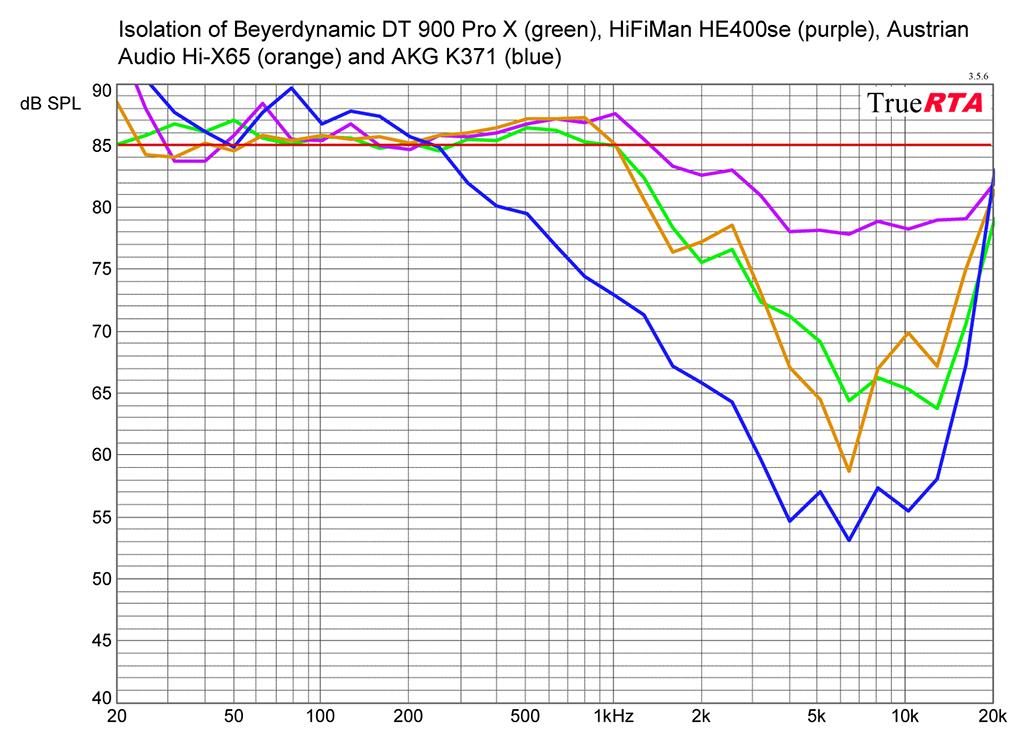 In this chart, the external noise level is 85dB SPL (the red trace), and numbers below that indicate the degree of attenuation of outside sounds. The lower the lines, the better the isolation. Like the Austrian Audio Hi-X65s, the DT 900 Pro Xes would most accurately be considered “semi-open back,” because they block a lot more high-frequency sound than models such as the HiFiMan HE400se headphones do. 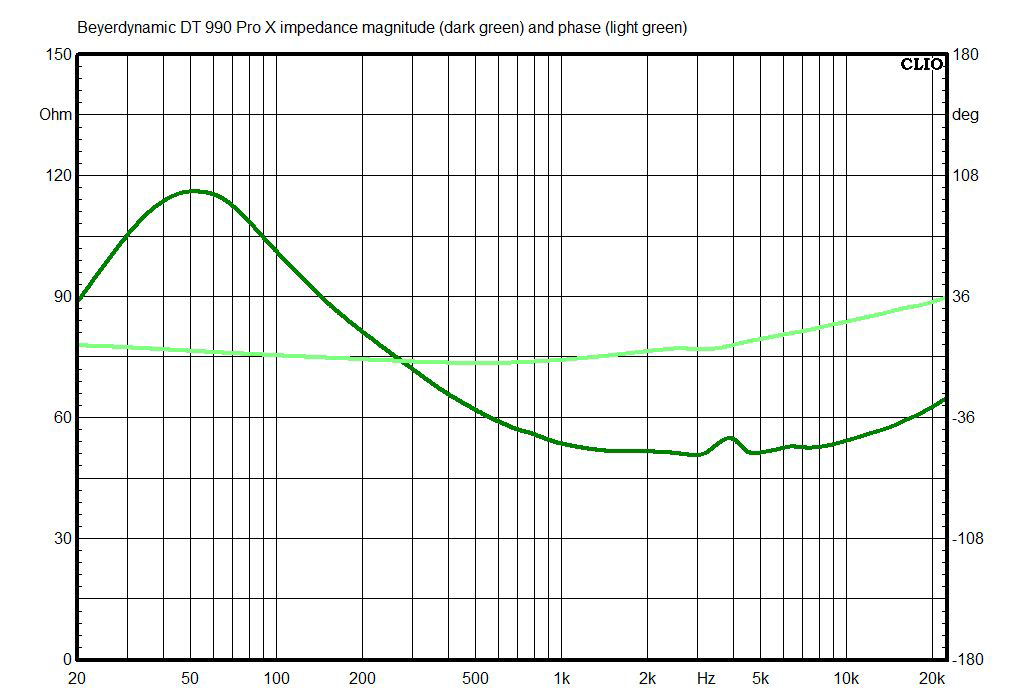 The impedance magnitude, rated at 48 ohms nominal, bottoms out at 45 ohms and swings up to 115 ohms at 50Hz, which isn’t unexpected for a dynamic driver. Phase shift is surprisingly mild for such a big impedance swing, though.

Sensitivity of the DT 900 Pro Xes, calculated for 48 ohms impedance and averaged from 300Hz to 3kHz, is 103dB—better than the rated 100dB, and enough to get satisfying volume from most source devices.

Bottom line: The only red flag here is that the DT 900 Pro X headphones’ tonal balance may get too soft when they’re used with a high-impedance source—so I’d be cautious about recommending them for use with tube amps.