I measured the Shure Aonic 215 Gen 2 earphones using laboratory-grade equipment: a GRAS RA0402 ear simulator and an Audiomatica Clio 12 QC audio analyzer. For isolation measurements, I used a laptop computer running TrueRTA software with an M-Audio MobilePre USB audio interface, and added the KB5000/KB5001 simulated pinnae with the full 43AG ear/cheek simulator. For reasons I wasn’t able to figure out, using my Reiyin WT-04 USB Bluetooth transmitter to send signals from the Clio 12 QC to the headphones resulted in frequency-response measurements with a sharp downturn above 5kHz, but using my Mpow BH259A Bluetooth transmitter worked fine. For wired measurements, the headphones were amplified using a Musical Fidelity V-CAN amplifier. These are “flat” measurements; no diffuse-field or free-field compensation curve was employed. If you’d like to learn more about what our measurements mean, click here. 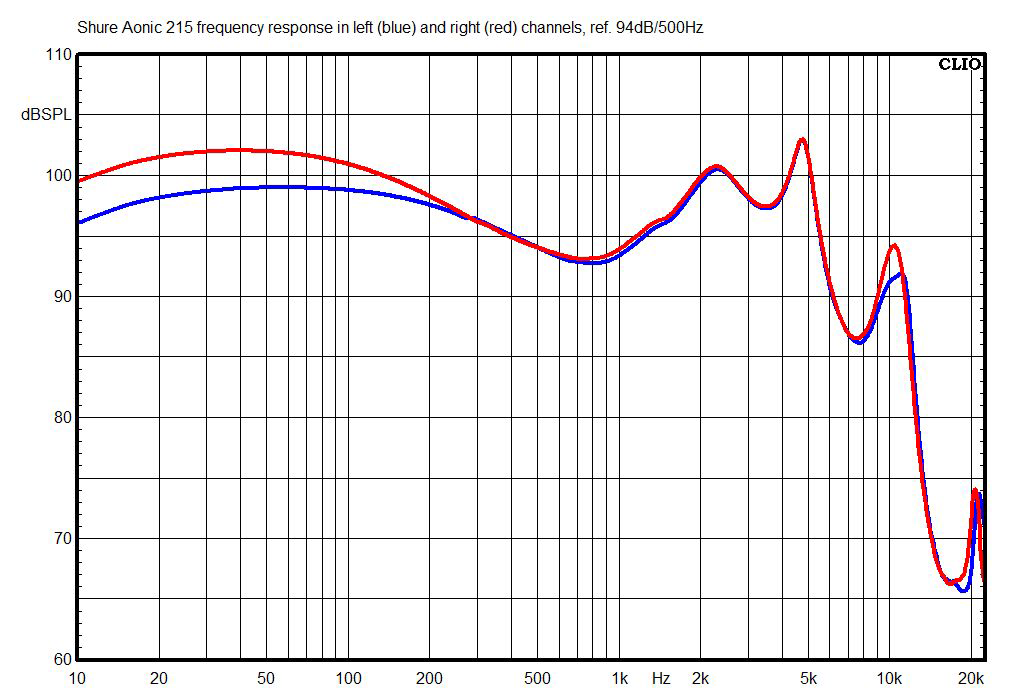 This chart shows the Aonic 215s’ frequency response with a wired connection. (The cable is not included, but a standard MMCX cable works, and I felt this was probably a more precise representation of what these earphones do than the rather troublesome Bluetooth tests I did.) This is a fairly standard-looking response for good-quality earphones. The one characteristic I’ll point out is the relative lack of energy between 5 and 10kHz, which suggests the Aonic 215s won’t sound as spacious and airy as earphones with stronger response in this octave. 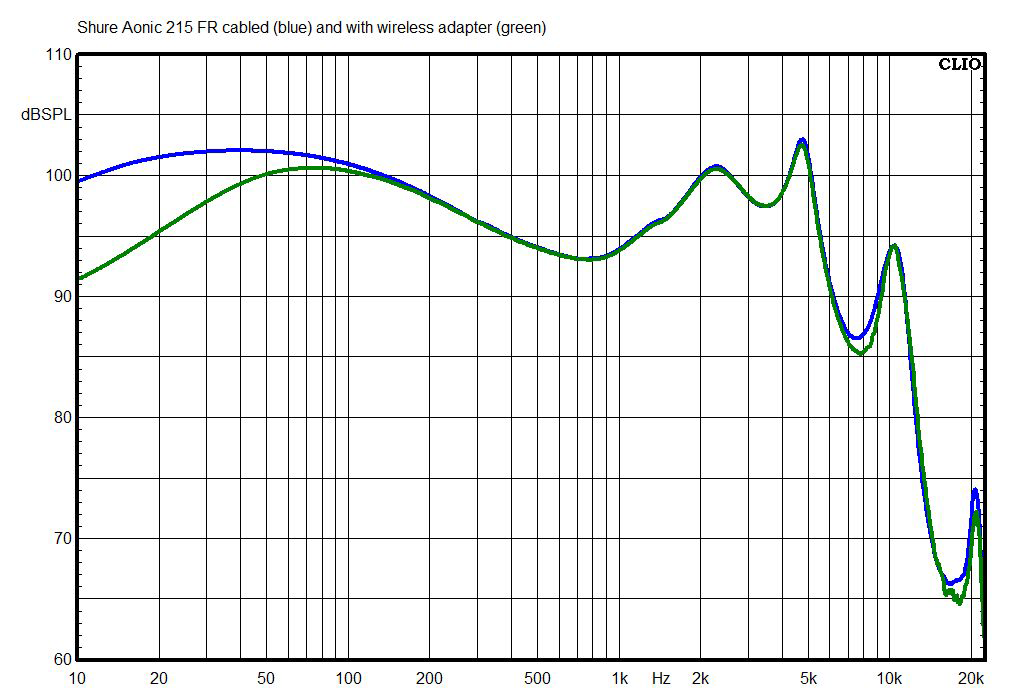 Here we can see the difference in response between the Bluetooth connection and the wired connection. It’s almost a perfect match, suggesting that Shure doesn’t employ any sort of DSP or EQ in its wireless adapters. The only difference is a little less bass response with the Bluetooth connection, and I’ve sometimes seen this anomaly in other measurements with the Mpow BH259A, so I wouldn’t put much stock in that result. 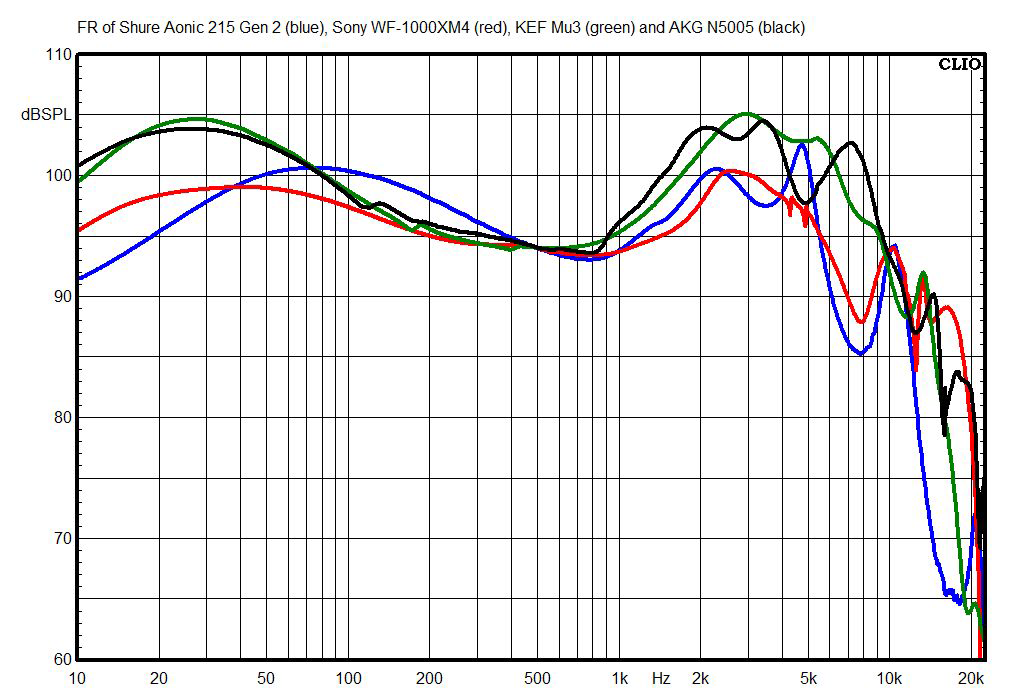 This chart shows the right-channel response of the Aonic 215 Gen 2s (with the Bluetooth connection), compared with a couple of other true wireless models, and with the AKG N5005, which closely tracks the Harman curve. The most important characteristic is the Shures’ strong midbass, compared with the weaker midbass and stronger low bass of the AKG and KEF models. The Shure curve is rather old-school, and tends to result in somewhat bloated bass—although in my listening tests, something in the treble seemed to balanced that out psychoacoustically. 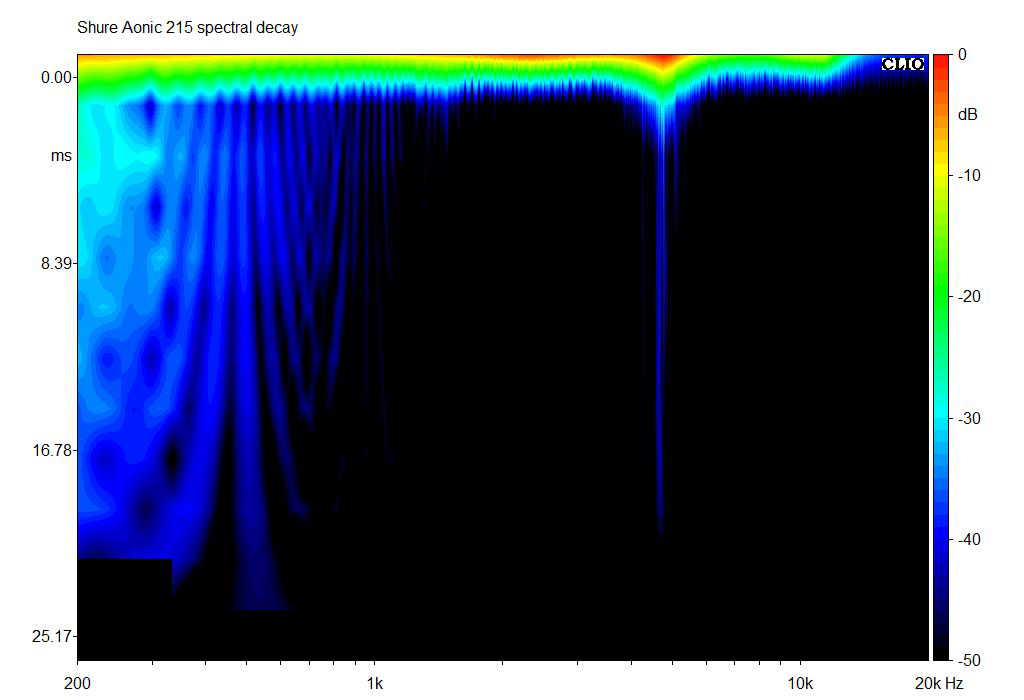 The Aonic 215s’ right-channel spectral-decay plot (measured with the wired connection) shows only one very high-Q resonance, at 4.8kHz, and while it lasts about 20ms, it’s at -40dB, so the low level and the very narrow bandwidth make it extremely unlikely that this resonance would be audible. 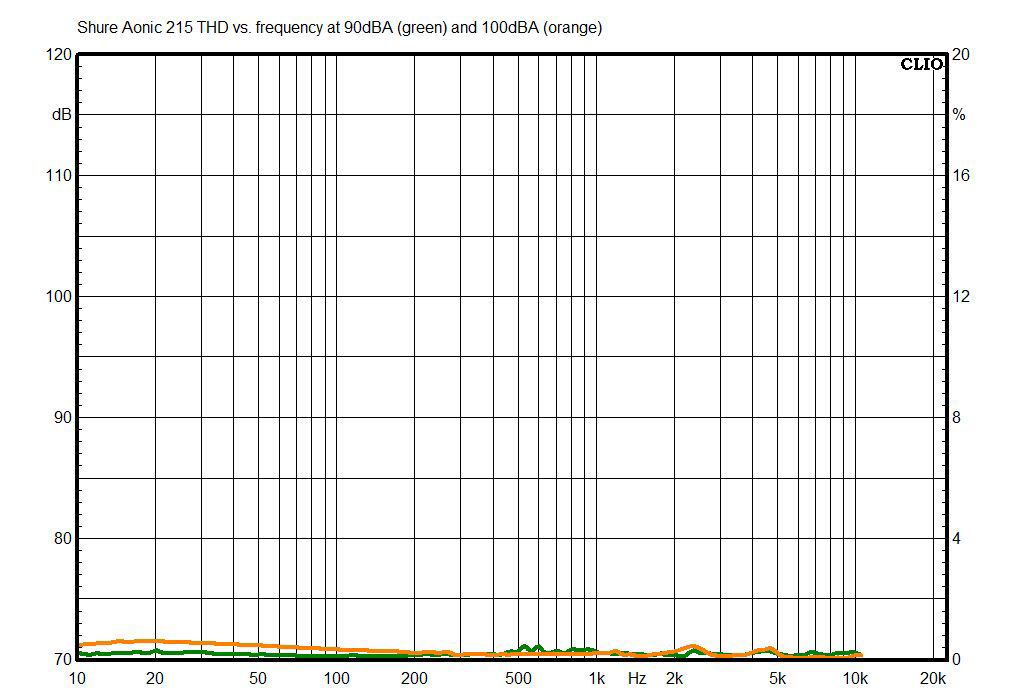 Here’s the THD vs. frequency chart, measured using the wired connection at 90dBA and 100dBA (both levels set with pink noise). Distortion’s too low to bother commenting on. 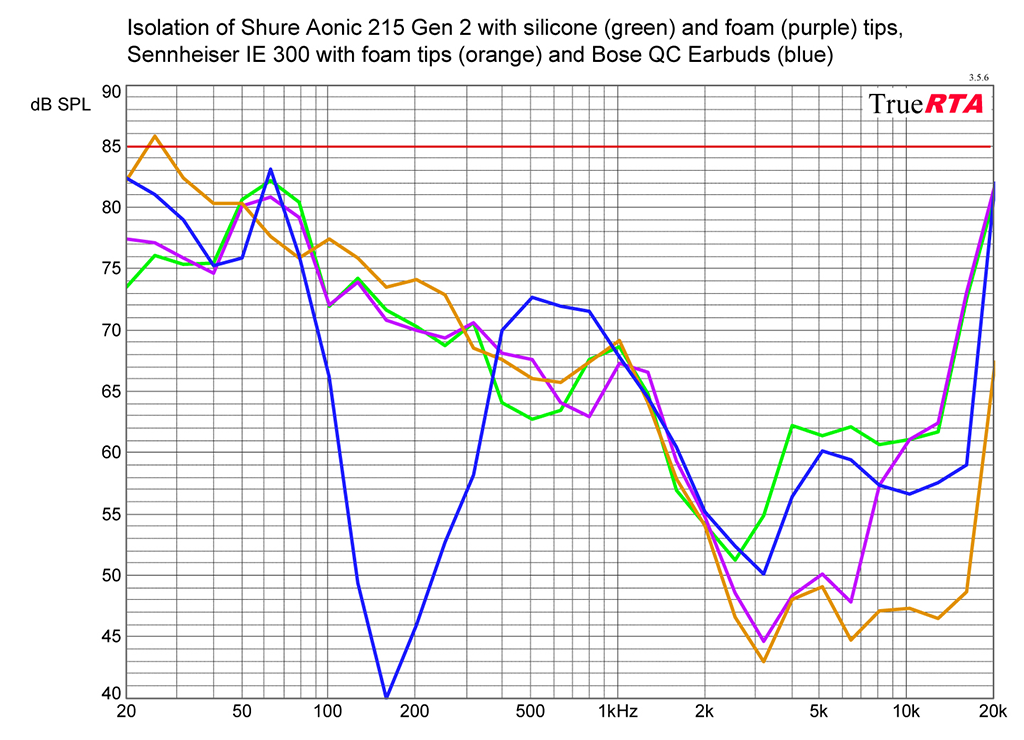 In this chart, the external noise level is 85dB SPL (the red trace), and numbers below that indicate the degree of attenuation of outside sounds. The lower the lines, the better the isolation. Like most earphones of the “cable-over-ear” type, the Aonic 215 Gen 2s offer excellent passive isolation—but I threw in the Bose QC earbuds so you could see how a true wireless model with top-notch noise canceling compares. 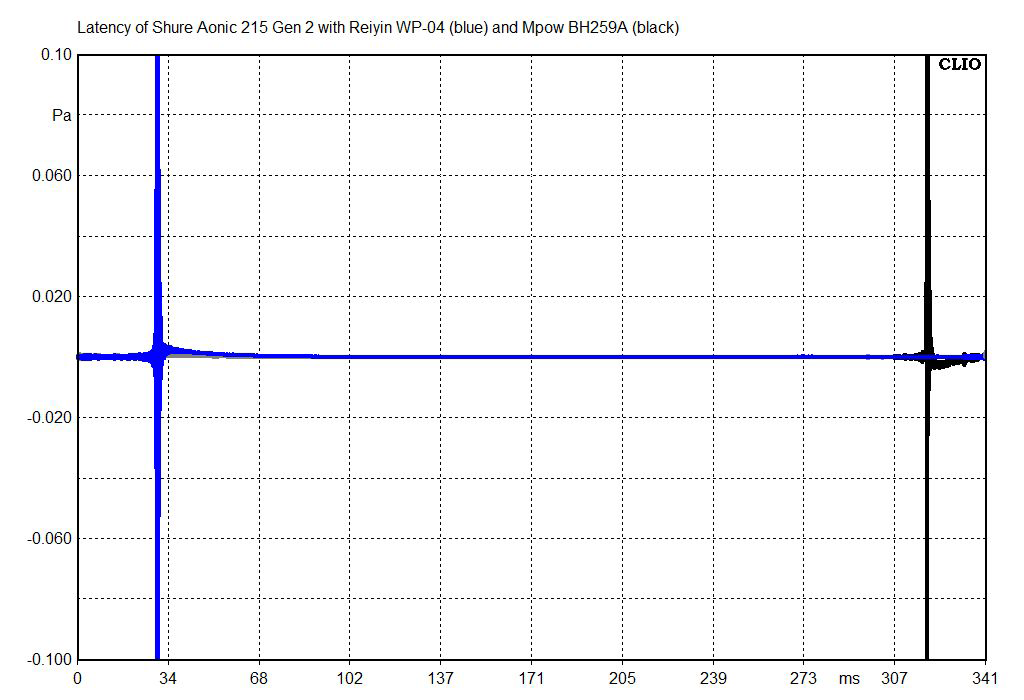 With the Reiyin transmitter, latency was typically around 30ms—a very low result, but I’ve seen comparable results with a few other aptX-equipped headphones and earphones that don’t claim to have low latency, but do nonetheless. With the Mpow transmitter, using a standard SBC connection, latency was typically around 320ms, which is not uncommon for true wireless models when a low-latency technology is not used in the source device.

Bottom line: Nothing much to be concerned about here—the Aonic 215 Gen 2s measure just fine with Bluetooth or with a wired connection.