Link: reviewed by Jason Thorpe on SoundStage! Hi-Fi on November 1, 2021

The table below summarizes the measurements published by Simaudio for the 860A v2 compared directly against our own. The published specifications are sourced from Simaudio’s website, either directly or from the manual available for download, or a combination thereof. With the exception of frequency response, where the Audio Precision bandwidth is set at its maximum (DC to 1MHz), assume, unless otherwise stated, a measurement input bandwidth of 10Hz to 90kHz, and the worst-case measured result between the left and right channels.

* It was difficult to achieve 1% THD into 4 ohms (2 channels driven) and bridged into 8 ohms without tripping the 860A v2’s fuse. Therefore this result is for approximately 0.1% THD.

** SimAudio’s published specification is actually THD (20Hz-20kHz); however, after speaking with Simaudio, it was discovered that this measurement is also bandwidth limited to 20kHz, thereby limiting the highest fundamental frequency (where second and third harmonics can be captured) to roughly 6kHz.

For the continuous dynamic power test, the 860A v2 was able to sustain 480W (0.3dB over rated output at roughly 0.1% THD) into 4 ohms using an 80Hz tone for 500ms, alternating with a signal at -10dB of the peak (50W) for 5 seconds, for 5 continuous minutes without inducing a fault or the initiation of a protective circuit. This test is meant to simulate sporadic dynamic bass peaks in music and movies. During the test, the top and sides of the 860A v2 was quite warm to the touch, causing physical discomfort after about 10 seconds. 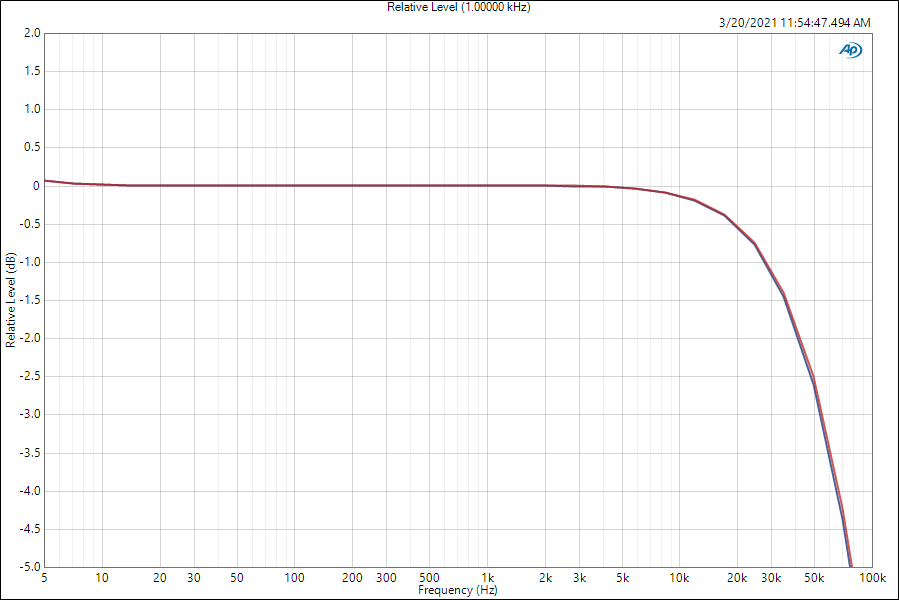 In our measured frequency-response plot above, the 860A v2 is essentially flat within the audioband (20Hz to 20kHz), and only -0.5dB down at 20kHz. Simaudio’s claim of 10Hz-55kHz, +0/-3dB, is corroborated, as we found the amplifier -3dB point at 55kHz. The 860A v2 should not be considered a high-bandwidth audio device. In the graph above and most of the graphs below, only a single trace may be visible. This is because the left channel (blue or purple trace) is performing identically to the right channel (red or green trace), and so they perfectly overlap, indicating that the two channels are ideally matched. 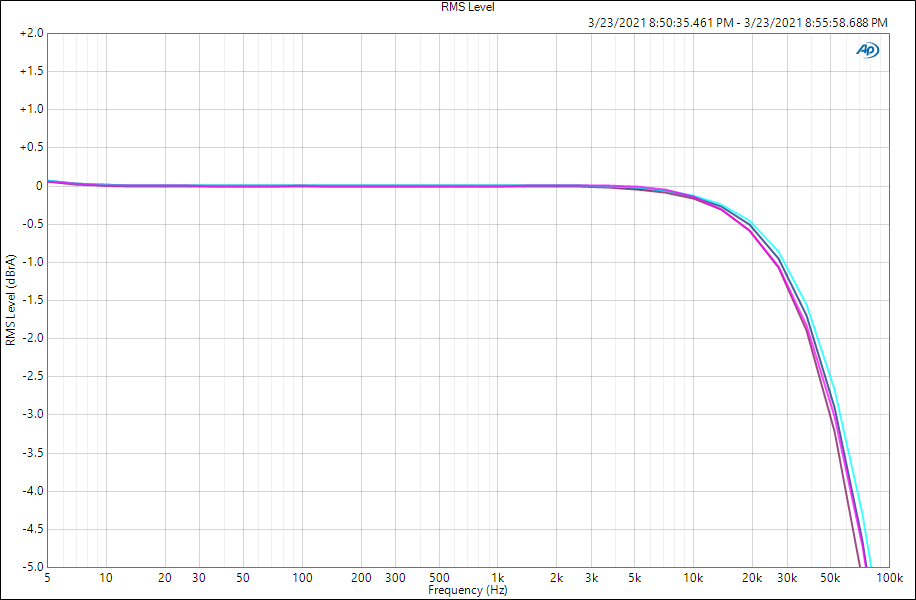 The charts above show RMS level (relative to 0dBrA, which is 1W into 8 ohms, or 2.83Vrms) as a function of frequency, for the balanced line-level input swept from 5Hz to 100kHz. The blue line is into an 8-ohm load, the purple line is into a 4-ohm load, the pink is an actual speaker (Focal Chora 806, measurements can found here), and the cyan is no load connected. The top chart shows that all four plots are virtually indistinguishable from one another below 10kHz. This is an indication of a high damping factor, or low output impedance. The . . . 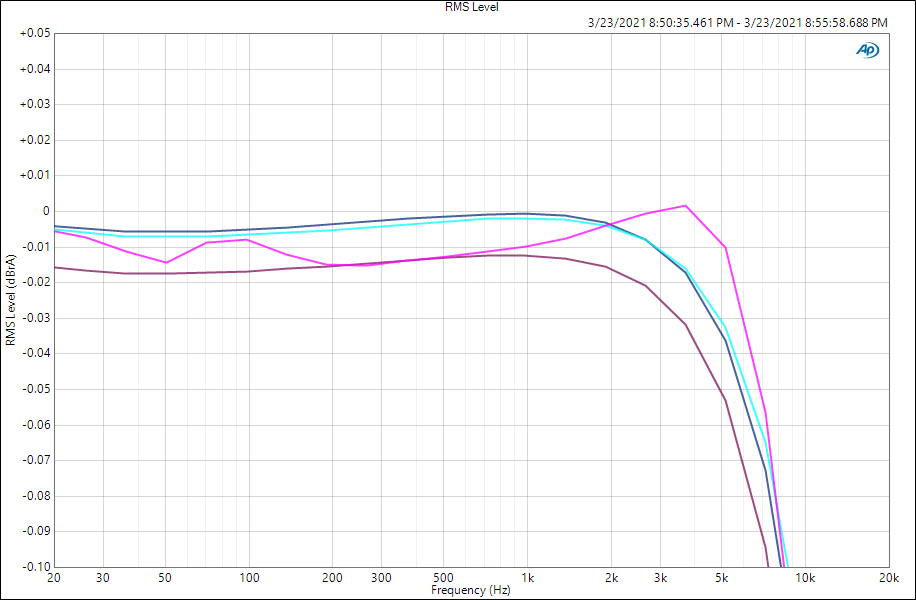 . . . chart above shows the same data, but with the vertical and horizontal axis expanded to show differences. Here we find that there’s a total deviation of less than 0.02dB between 4 ohms and no load. The maximum variation in RMS level when a real speaker was used as a load is also extremely small, deviating by less than 0.01dB within the flat portion of the curve (below 5kHz). There is a slight rise at high frequencies; however, this is due to the 860A v2’s inherent frequency response, and not the output impedance of the amplifier interacting with a load that varies with frequency. 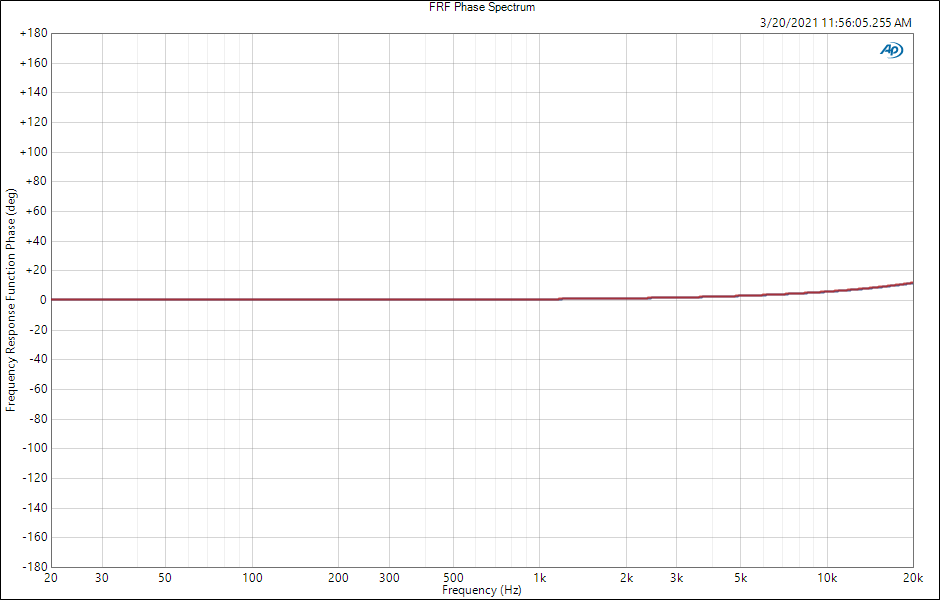 Above is the phase response plot for the 860A v2 from 20Hz to 20kHz. The 860A v2 does not invert polarity, and there is virtually no phase shift throughout the audioband, with a worst case of just over +10 degrees at 20kHz. 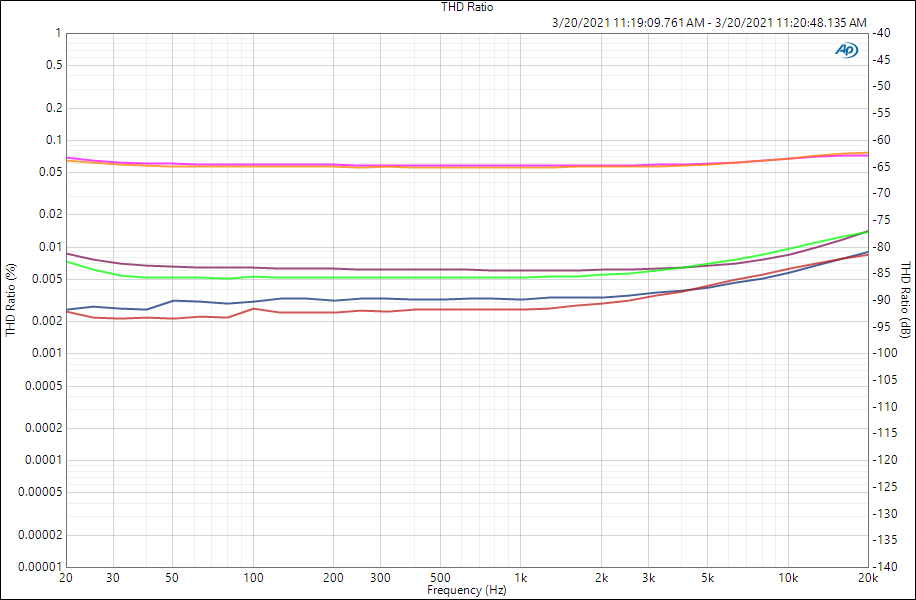 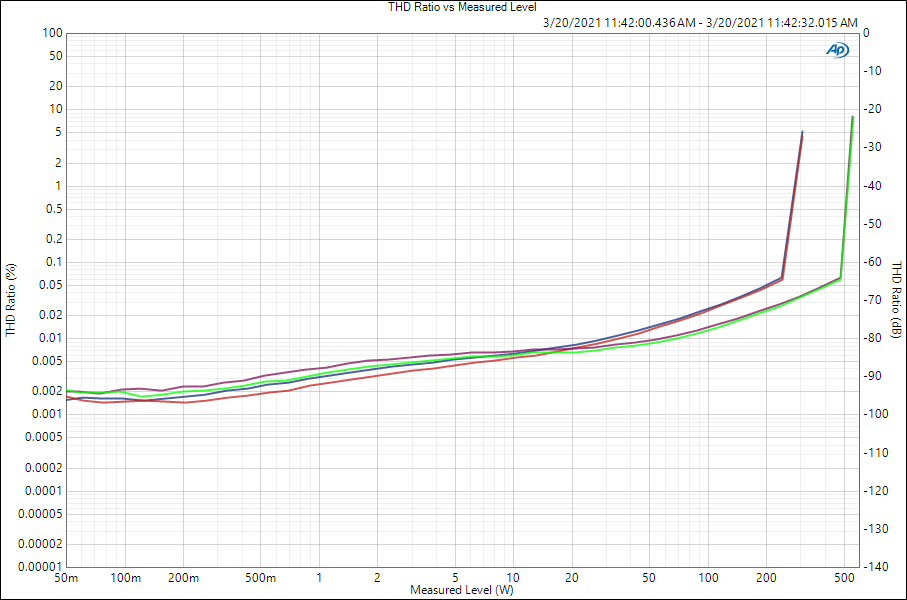 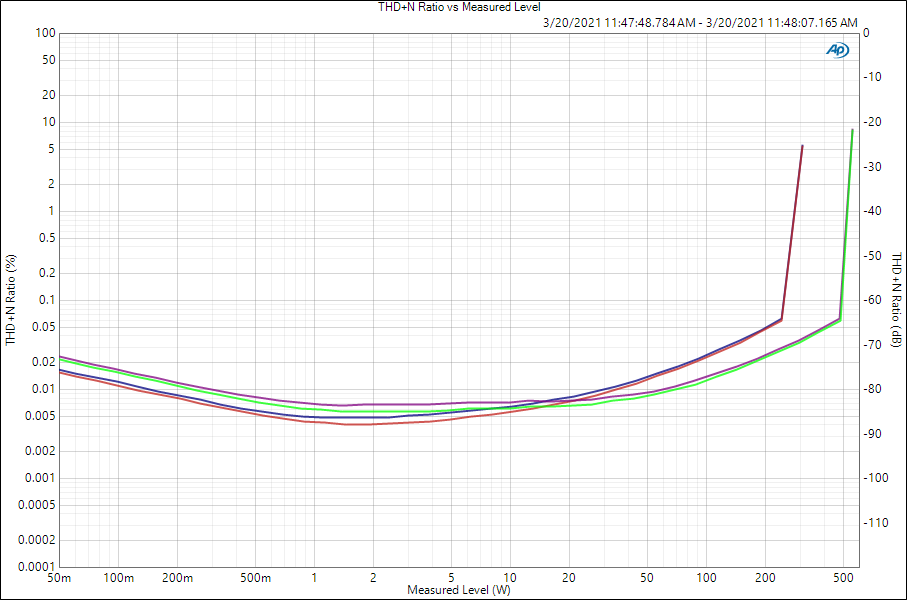 The chart above shows THD+N ratios measured at the output of the 860A v2 as a function of output power for the balanced line-level input, for an 8-ohm load (blue/red for left/right) and a 4-ohm load (purple/green for left/right). Once again, the 4-ohm and 8-ohm data are very close together up to about 30W. At 50mW, THD+N values are near 0.02% for both 8- and 4-ohm data, dipping down to around 0.005% around 2W. 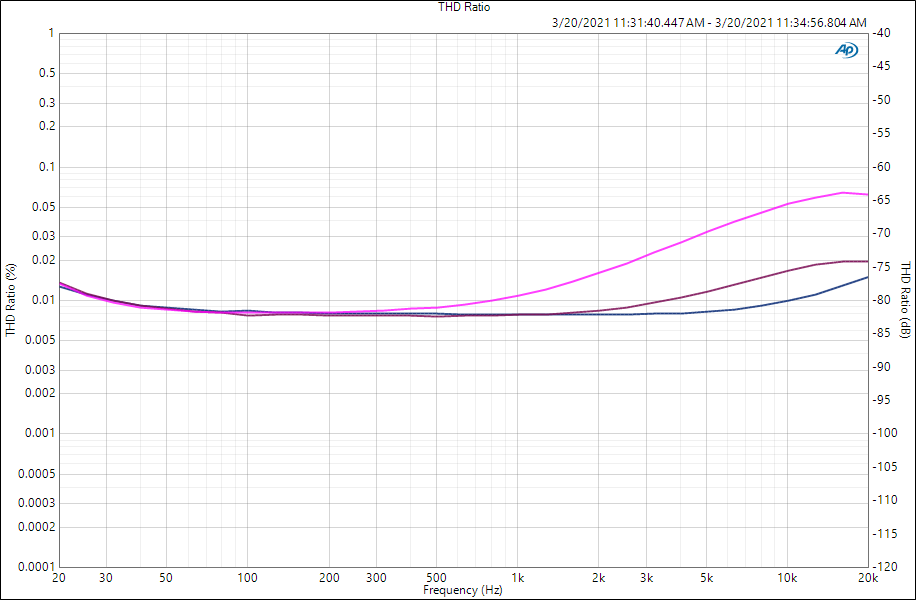 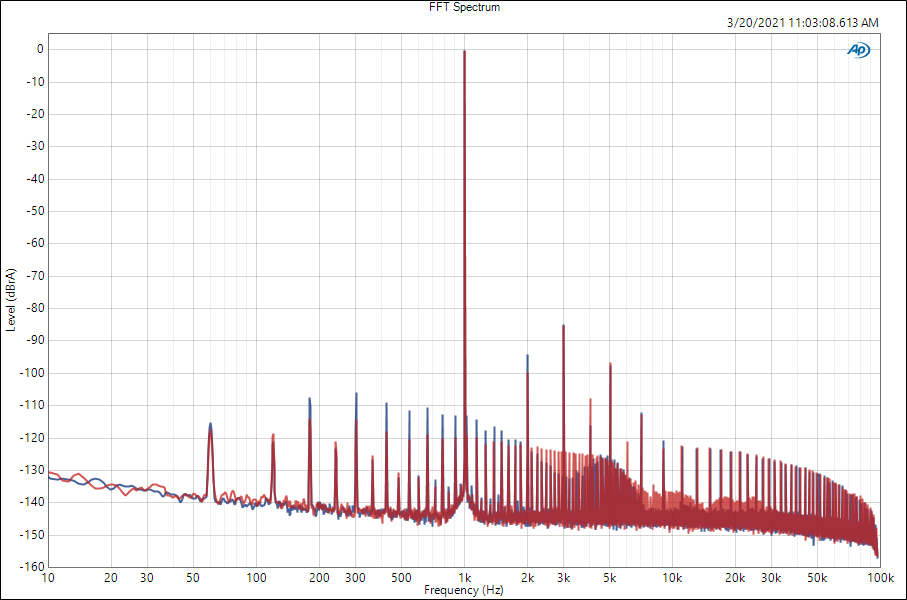 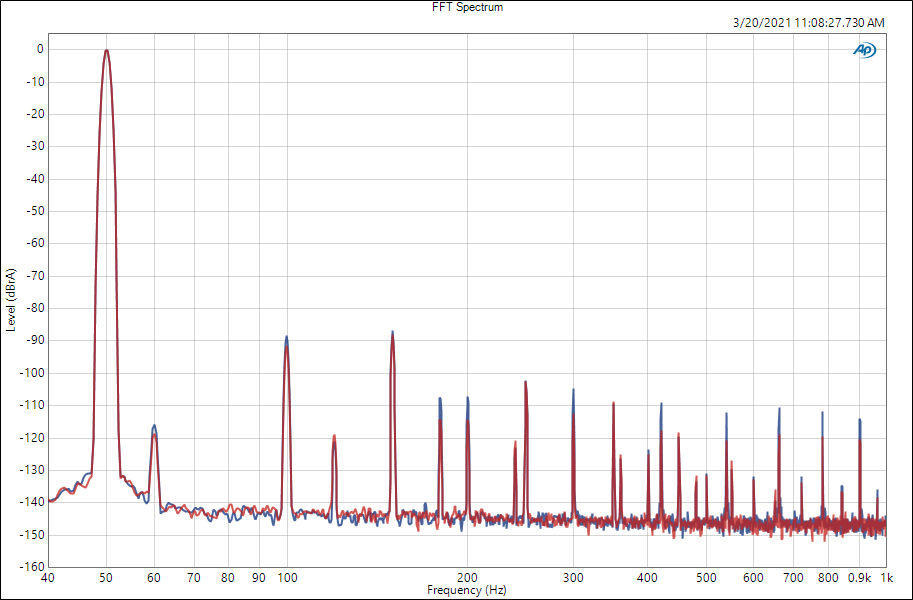 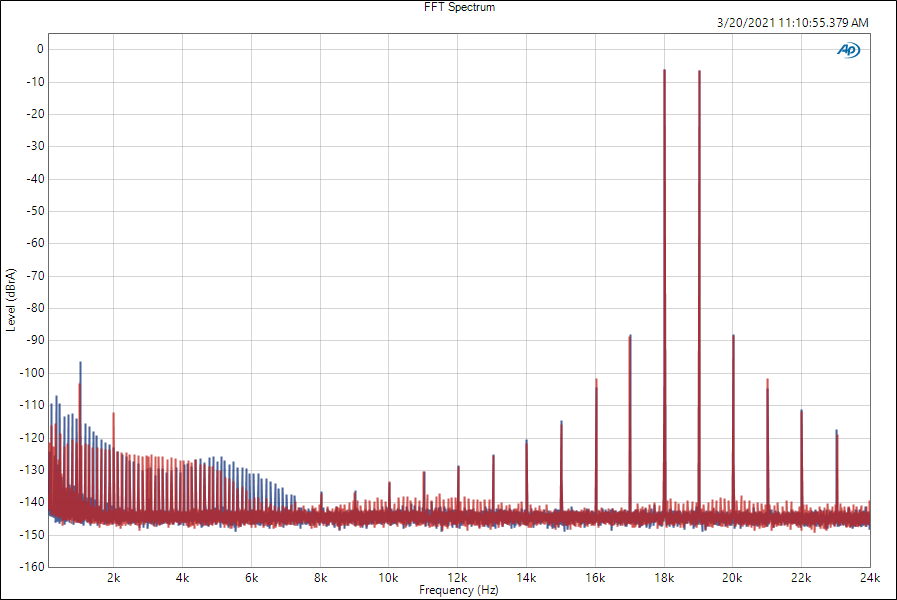 Shown above is the FFT of the intermodulation distortion (IMD) products for an 18kHz + 19kHz summed sine-wave stimulus tone at the balanced input. The input RMS values are set at -6.02dBrA so that, if summed for a mean frequency of 18.5kHz, would yield 10W (0dBrA) into 8 ohms at the output. We find that the second-order modulation product (i.e., the difference signal of 1kHz) is just above (left channel) and below (right channel) -100dBrA, or 0.001%, while the third-order modulation products, at 17kHz and 20kHz, are just above -90dBrA, or 0.003%. 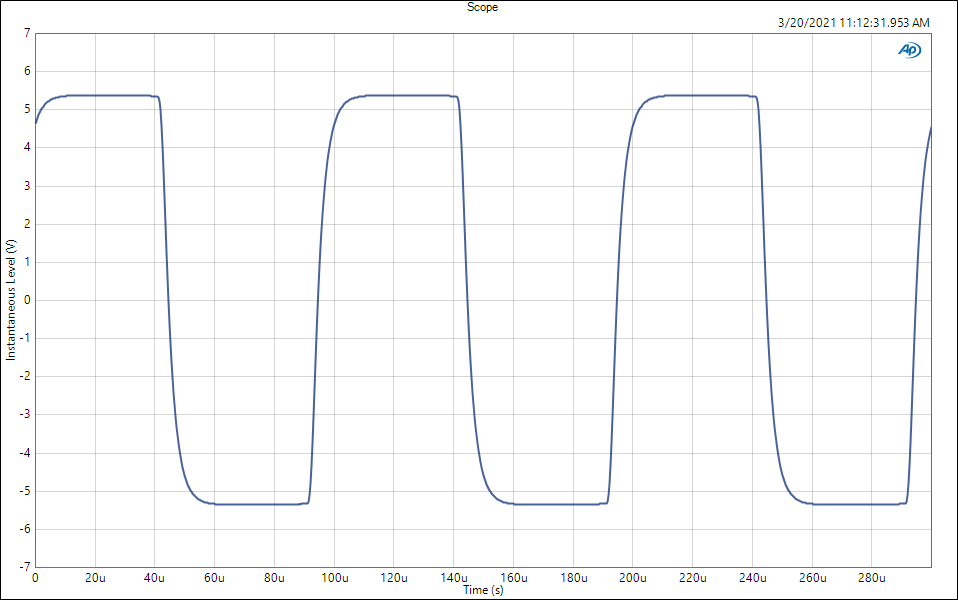 Above is the 10kHz square-wave response of the 860A v2 into 8 ohms. Due to limitations inherent to the Audio Precision APx555 B Series analyzer, this chart should not be used to infer or extrapolate the 860A v2’s slew-rate performance. Rather, it should be seen as a qualitative representation of the 860A v2’s limited bandwidth. An ideal square wave can be represented as the sum of a sine wave and an infinite series of its odd-order harmonics (e.g., 10kHz + 30kHz + 50kHz + 70kHz . . .). A limited bandwidth will show only the sum of the lower-order harmonics, which may result in noticeable undershoot and/or overshoot, and softening of the edges. The 860A v2’s reproduction of the square wave is clean, but with some softening of the corners. 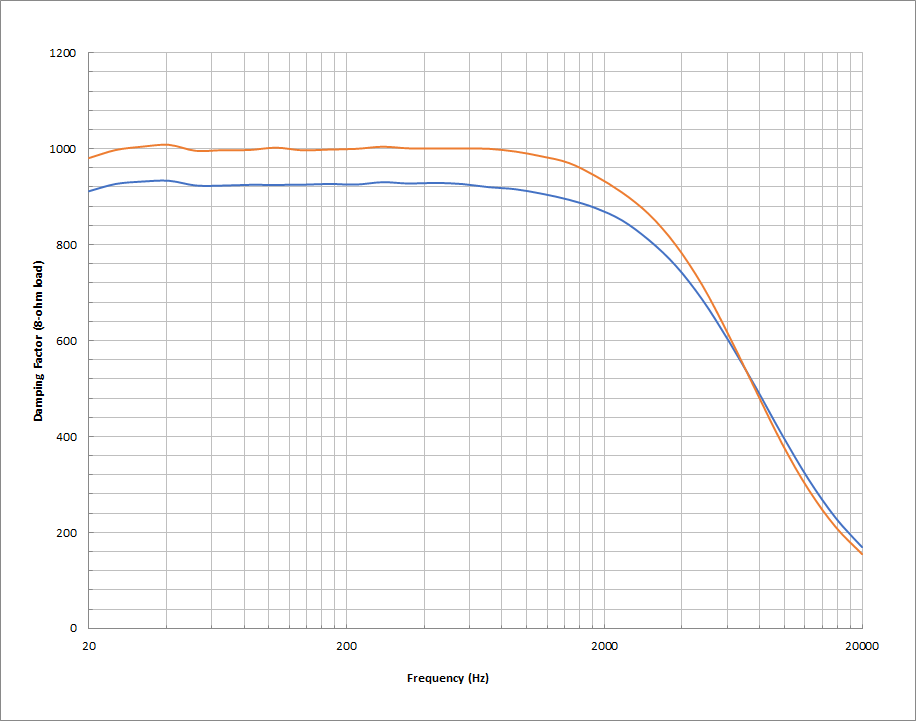