I measured the Austrian Audio Hi-X65 headphones using laboratory-grade equipment: a GRAS Model 43AG ear/cheek simulator/RA0402 ear simulator with KB5000/KB5001 simulated pinnae, and an Audiomatica Clio 12 QC audio analyzer. For isolation measurements, I used a laptop computer running TrueRTA software with an M-Audio MobilePre USB audio interface. For most measurements, the headphones were amplified using a Musical Fidelity V-CAN amplifier; I used a Schiit Magnius amplifier for distortion measurements. These are “flat” measurements; no diffuse-field or free-field compensation curve was employed. If you’d like to learn more about what our measurements mean, click here. 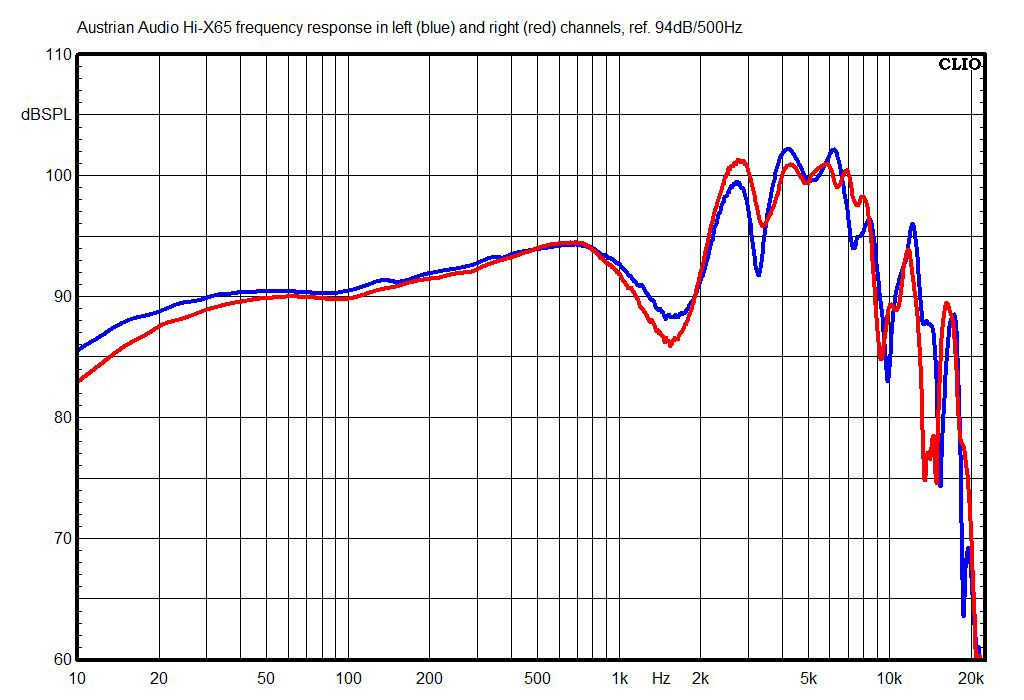 This chart shows the Hi-X65s’ frequency response. The “elephant in the room” here is the relative lack of bass response. I was surprised to see this, and worried it might be due to an air leak of the earpads against the plate of the ear/cheek simulator, but even after repeated repositionings I always got essentially the same result, and got the same result in the left channel, too, which requires the 43AG be turned 180 degrees. The gradually rolled-off bass response results in a midrange peak around 700Hz, which is also unusual. 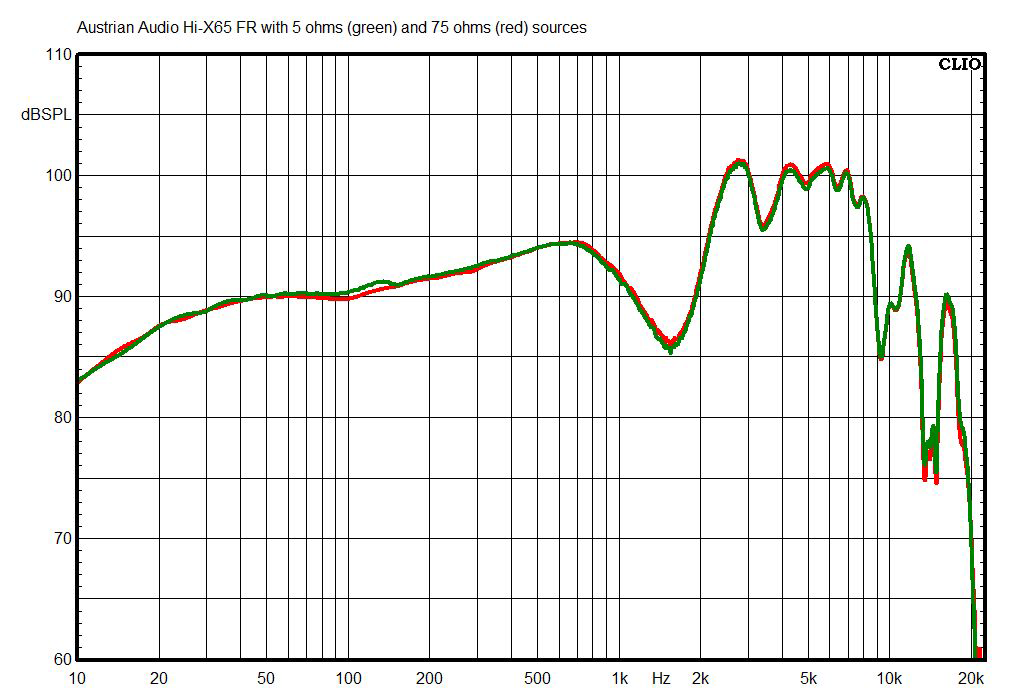 This chart shows how the Hi-X65s’ tonal balance changes when they’re used with a high-impedance source, such as a cheap laptop, some tube amps, or some professional headphone amps. The difference is negligible and probably inaudible. 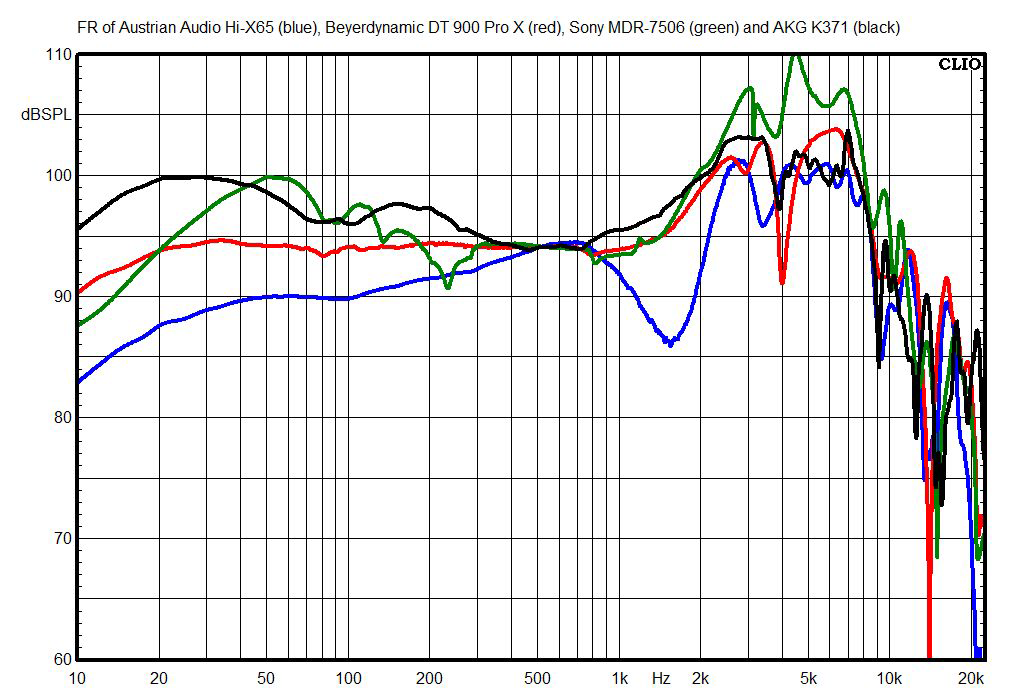 This chart shows the Hi-X65s’ right-channel response compared with the open-back Beyerdynamic DT 900 Pro X headphones, and two closed-back pro headphones: the Sony MDR-7506 and the AKG K371, which are said to be very close to the Harman curve. All of these are referenced to 94dB at 500Hz, which makes the Hi-X65s seem more of an outlier than they really are—but they’re still an outlier, with less bass response than the others (which I clearly heard). They also have more emphasis between 400Hz and 1kHz, and less in the 1 to 2kHz range (neither of which were apparent to me in my listening tests). 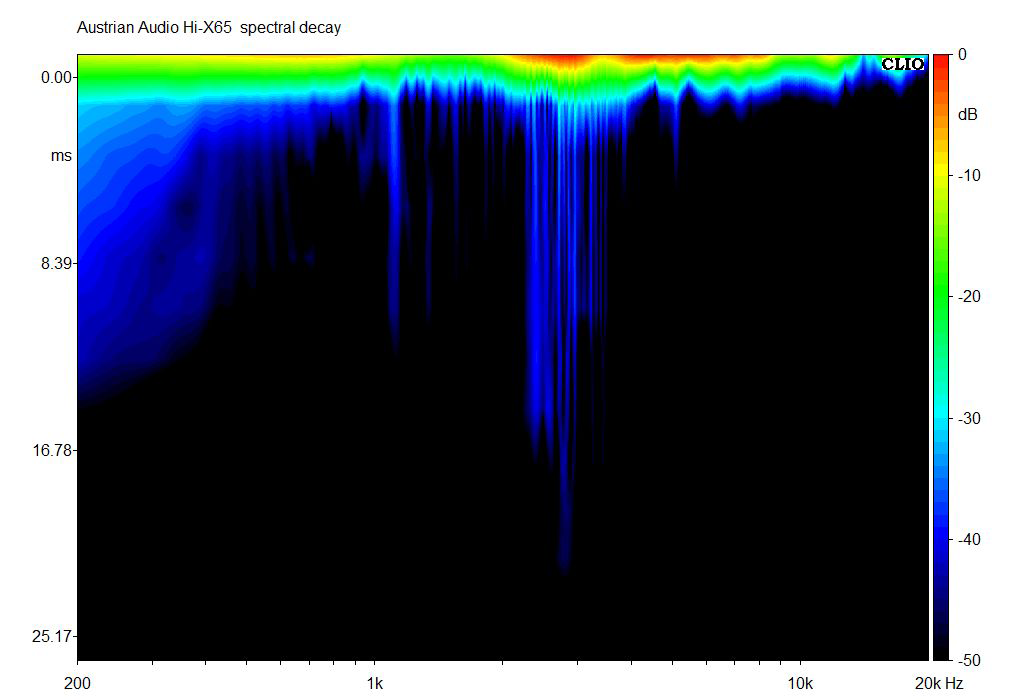 The Hi-X65s’ right-channel spectral-decay plot is clean but for some “hash” between about 2.3 and 3.5kHz. I see this often with planar-magnetic drivers, but can’t recall seeing it with a dynamic driver, although with planars the hash usually covers a bandwidth of 2 to 3kHz. To my knowledge, it’s not detrimental to the sound—it seems to correlate with headphones producing a good sense of “air” and spaciousness—but it does suggest that Austrian Audio’s doing something a little different with its dynamic drivers. 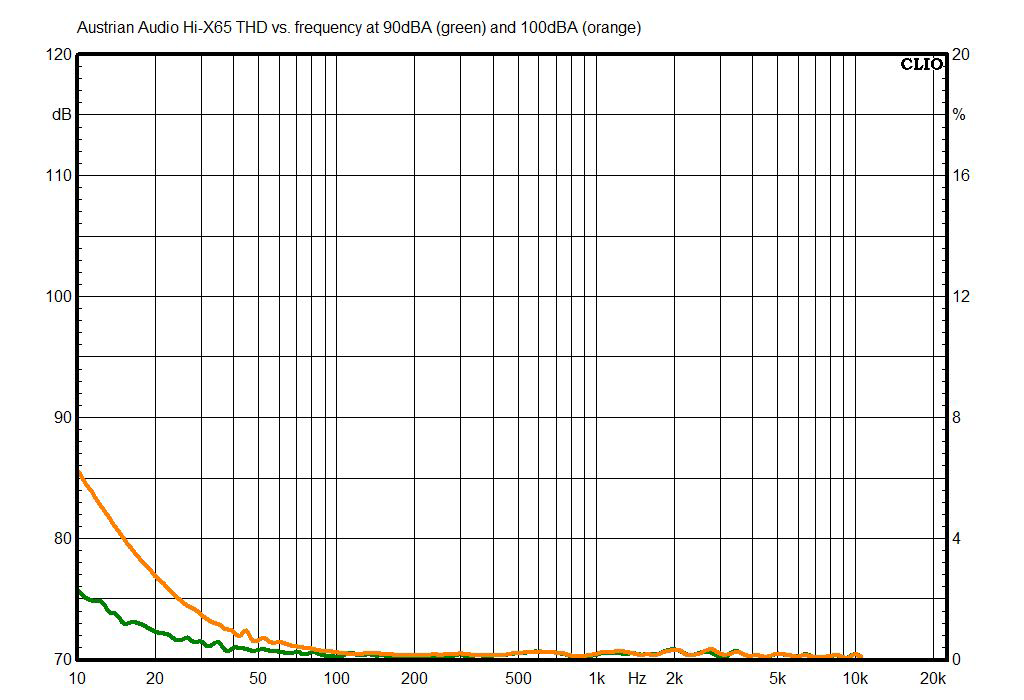 Here’s the THD vs. frequency chart, measured at 90dBA and 100dBA (both levels set with pink noise). Distortion is very low with these headphones, rising to just 3% THD at 20Hz at the extremely loud level of 100dBA (measured with pink noise). 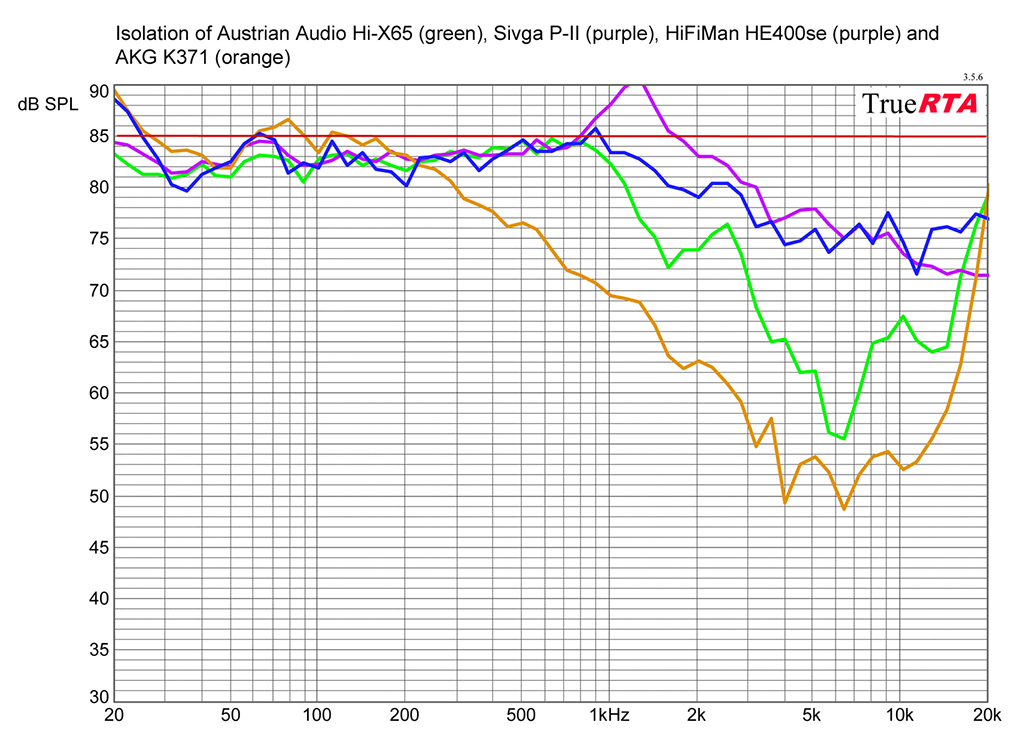 In this chart, the external noise level is 85dB SPL, and numbers below that indicate the degree of attenuation of outside sounds. The lower the lines, the better the isolation. I compared the Hi-X65s’ isolation with two open-back models (the Sivga P-II and HiFiMan HE400se headphones) and the AKG K371 closed-back headphones. As you can see, the Hi-X65s might more accurately be referred to as semi-open, because their isolation falls between the closed-back and open-back models. 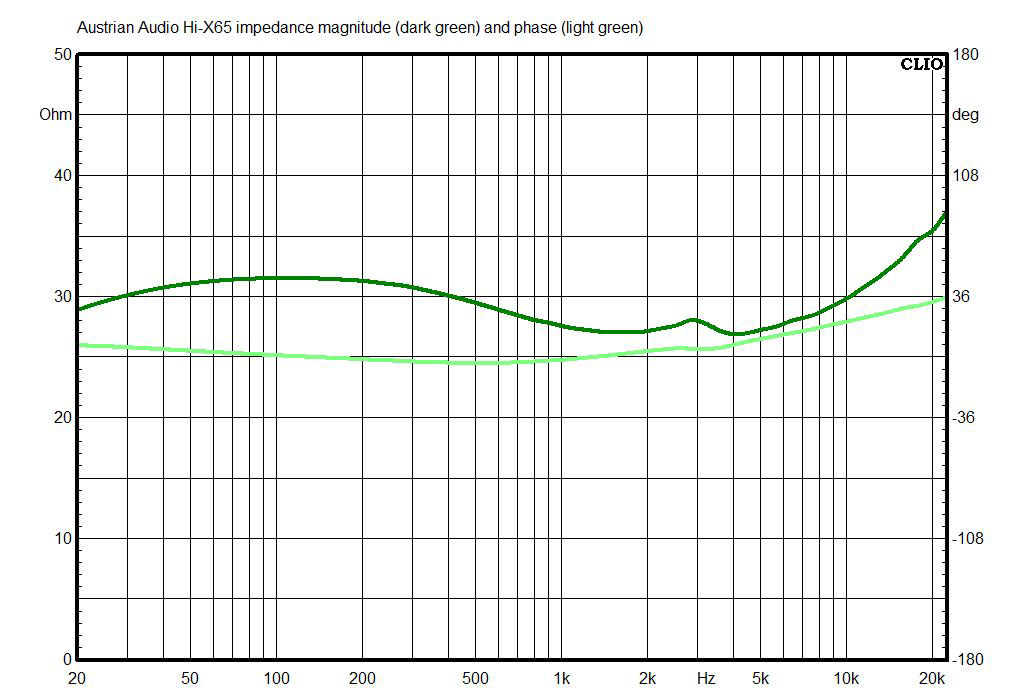 The impedance magnitude averages about 29 ohms, and starts to rise above about 5kHz—not an unusual result with a dynamic driver. The phase response is fairly flat.

Sensitivity, measured between 300Hz and 3kHz, using a 1mW signal calculated for 25 ohms rated impedance, is 96.2dB. So the Hi-X65s should play reasonably loud when plugged into a smartphone or tablet, but could probably benefit from the use of an external amplifier or DAC-amplifier.

Bottom line: The Hi-X65 headphones do sound pretty good, and their measured performance in areas such as distortion, impedance, and spectral decay looks very good, but from a frequency-response standpoint, they’re rather unusual.