I measured the 64 Audio Duo earphones using laboratory-grade equipment: a GRAS Model 43AG ear/cheek simulator/RA0402 ear simulator with KB5000/KB5001 simulated pinnae, and an Audiomatica Clio 12 audio analyzer. For isolation measurements, I used a laptop computer running TrueRTA software with an M-Audio MobilePre USB audio interface. For most measurements, the headphones were amplified using a Musical Fidelity V-CAN amplifier; I used a Schiit Magnius amplifier for distortion measurements. I used the supplied medium-sized SpinFit silicone tips for all measurements because they fit best in the ear simulator. These are “flat” measurements; no diffuse-field or free-field compensation curve was employed. If you’d like to learn more about what our measurements mean, click here. 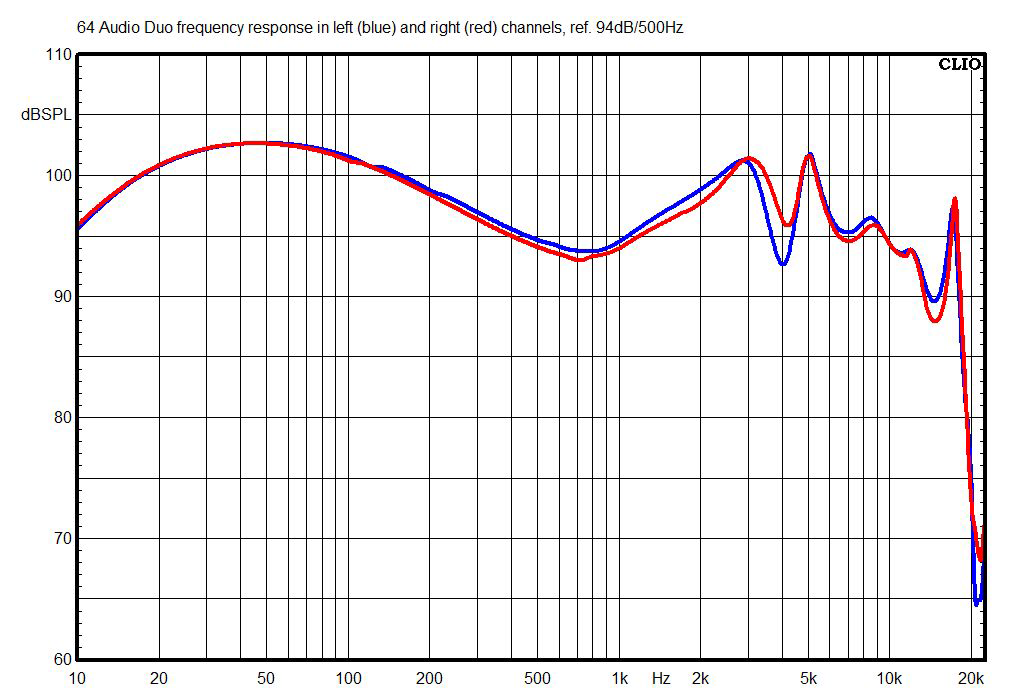 This chart shows the Duos’ frequency response. It’s pretty normal stuff. Reduce the output by a few dB at 200Hz (very difficult to do with a passive, two-way design like this) and you’d have something somewhat close to the Harman curve. There’s a big resonant peak at 17kHz. I can’t hear discrete tones at that frequency, and although I often can hear the phase effects of high-frequency peaks “leaking down” to lower frequencies, I can’t in this case. I’d guess that most females under 45, and most males under 25, will probably notice the effects of this peak—but I doubt they’re the target market for $1200 earphones. 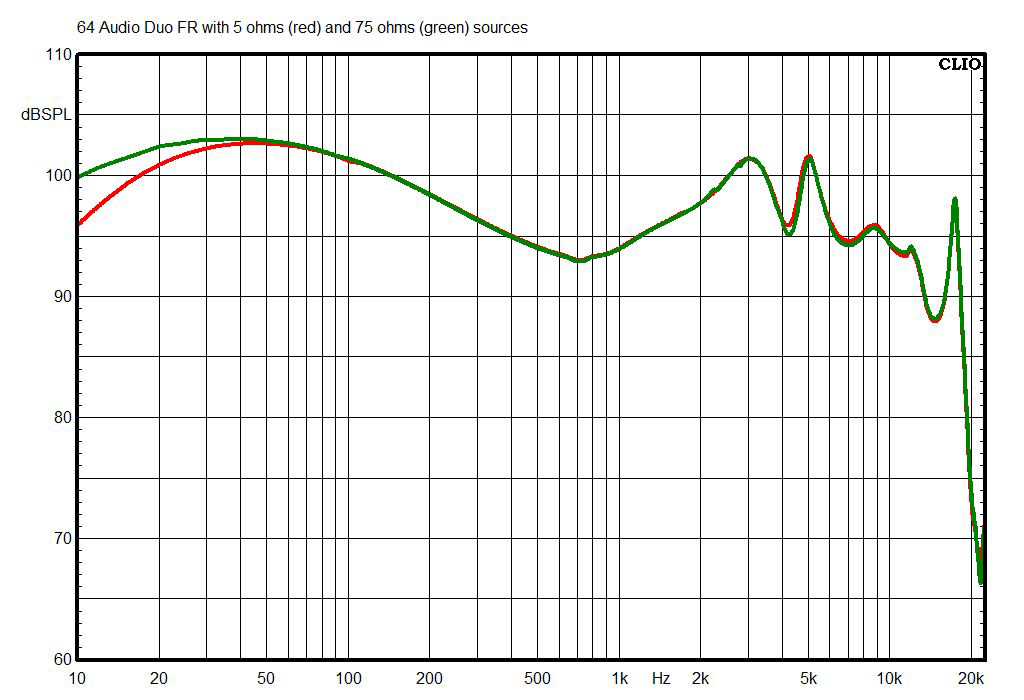 This chart shows how the Duos’ tonal balance changes when they’re used with a high-impedance source, such as a cheap laptop, some tube amps, or some professional headphone amps. Considering that the treble is handled by a balanced armature, it’s surprising to see so little difference in response when the source impedance is changed. 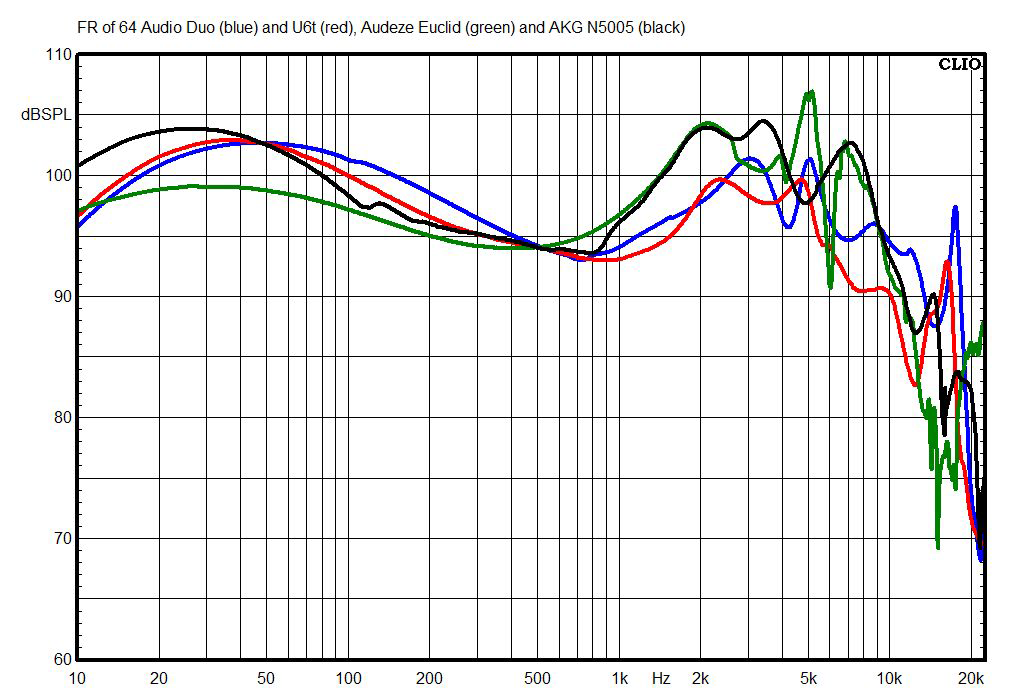 This chart shows the Duos’ right-channel response compared with the 64 Audio U6t, the Audeze Euclid, and the AKG N5005 earphones, the last in that list being the passive earphones that come closest to the Harman curve. You can see how the Duos’ bass is flatter than the U6t earphones’ bass, and how the treble is elevated above about 6kHz (I’d expected I’d see a peak at about 7kHz rather than shelved-up treble, but close enough). I’m very surprised to see how different the Duos and the Euclids measure, considering that I thought they sounded very similar. But with headphones and earphones, the effect of a peak in one area balancing or unbalancing the sound across the spectrum seems more extreme than it is with speakers, so weird things can happen. 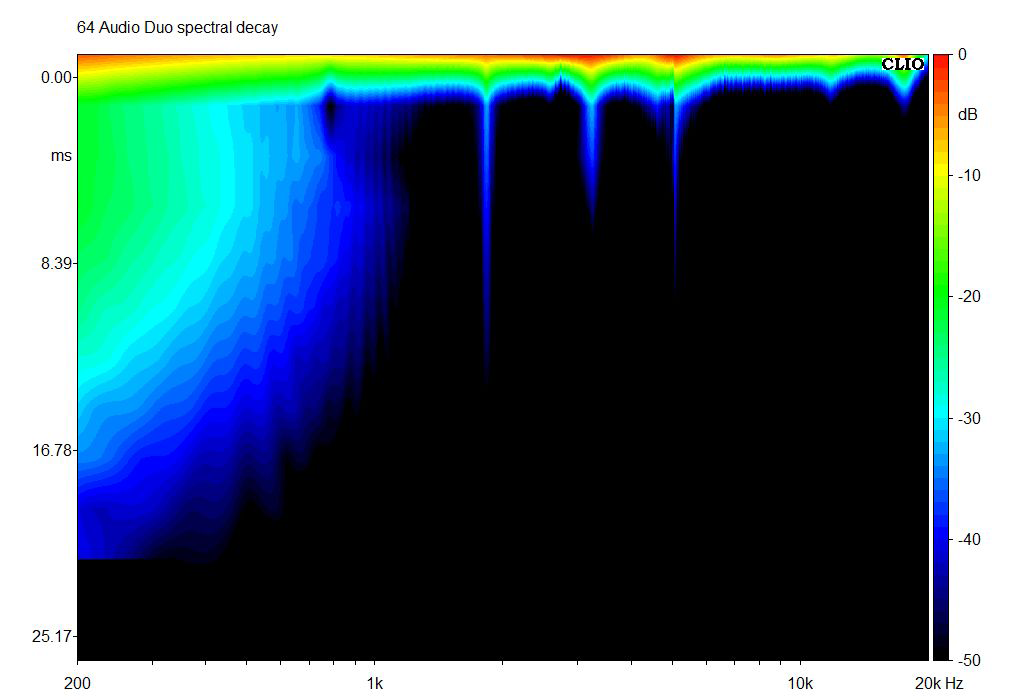 The Duos’ spectral-decay plot looks very clean, with some resonance sneaking up from the bass region, but basically none above that. 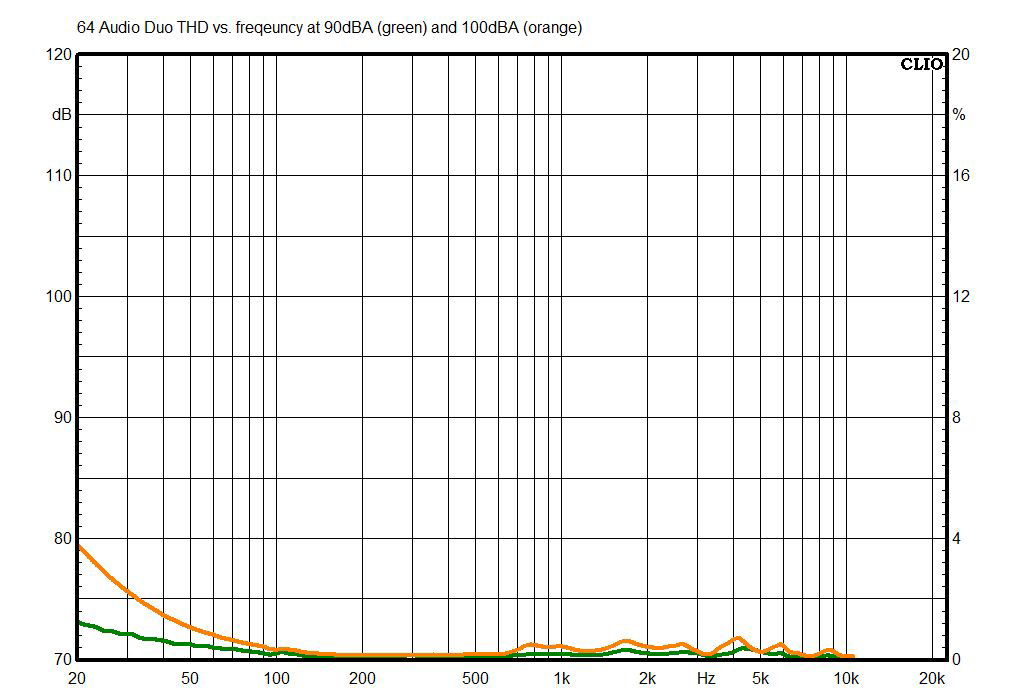 Total harmonic distortion of the Duos is very low even at the extremely loud level of 100dBA. 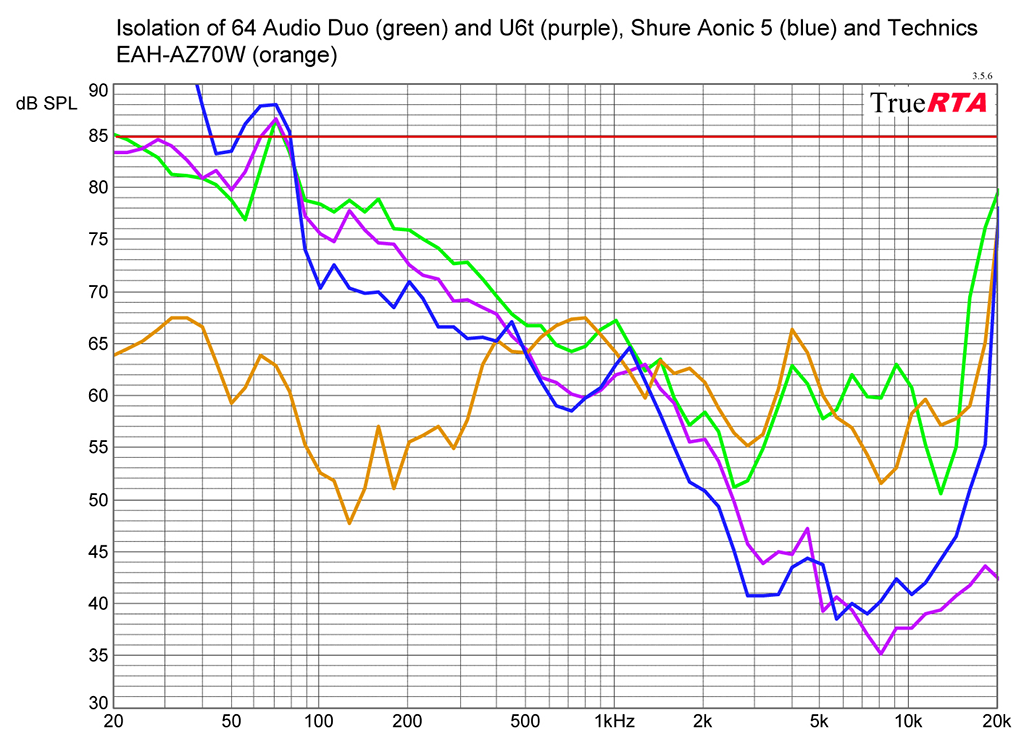 In this chart, the external noise level is 85dB SPL, and numbers below that indicate the degree of attenuation of outside sounds. The lower the lines, the better the isolation. I added the U6t earphones because they’re similar in design to the Duos, but they’re not open-back—and it’s hard, from reading the marketing materials and looking at the product, to figure out exactly how “open-back” the Duos are. According to this measurement, the open-back effect seems to kick in only above about 3kHz, which I assume is where the dynamic driver starts to roll off and the Tia balanced-armature tweeter kicks in. Below 3kHz, the Duos offer only about 5dB less isolation than the U6t’s. Above 3kHz, the Duos offer 15 to 25dB less isolation than the U6t’s, so they definitely have some degree of “open-back-ness.” I included the Technics EAH-AZ70W true wireless earphones so you can see how a good set of noise-canceling earphones compare. 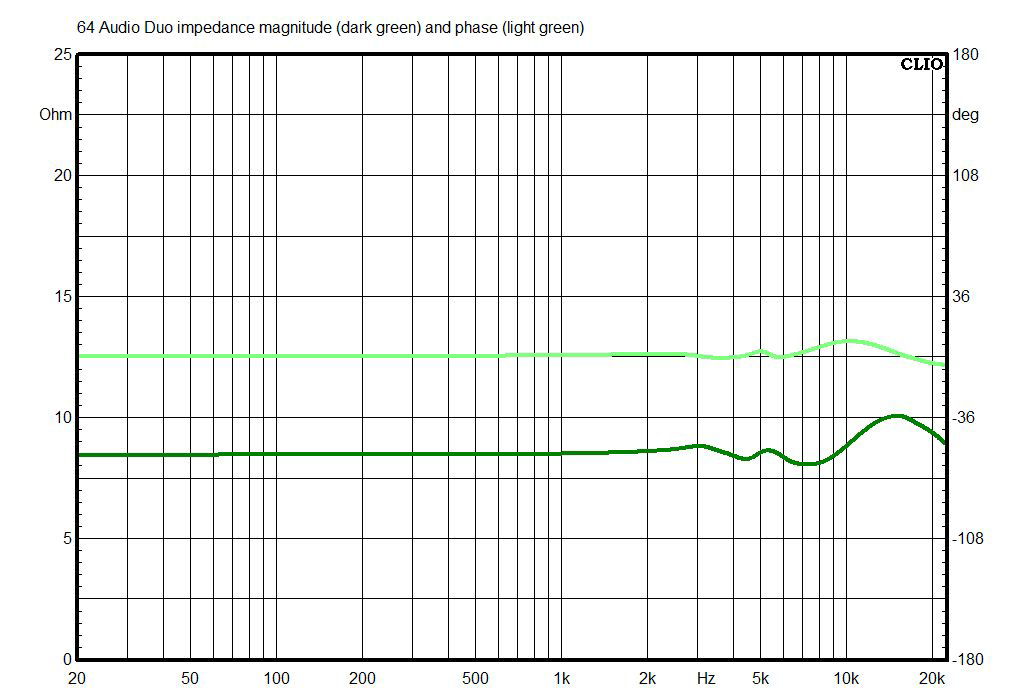 The Duos’ impedance curve is mostly flat at 7 ohms up to about 3kHz, and there’s only a little bit of variance once the tweeter kicks in, which is surprising because it’s a balanced armature, which would normally swing sharply upward in impedance as the frequency rises above a few kHz. Phase is flat below 3kHz, with only a very modest swing at higher frequencies.

Sensitivity, measured between 300Hz and 3kHz, using a 1mW signal calculated for 9 ohms rated impedance, is 98.7dB. That’s low for earphones, but not so low that you can’t get reasonable volume from most source devices.

Bottom line: Nothing to worry about with the 64 Audio Duos, their measurements are all safe’n’sane.