I measured the Sivga P-II headphones using laboratory-grade equipment: a GRAS Model 43AG ear/cheek simulator/RA0402 ear simulator with KB5000/KB5001 simulated pinnae, and an Audiomatica Clio 12 QC audio analyzer. For isolation measurements, I used a laptop computer running TrueRTA software with an M-Audio MobilePre USB audio interface. For most measurements, the headphones were amplified using a Musical Fidelity V-CAN amplifier; I used a Schiit Magnius amplifier for distortion measurements. These are “flat” measurements; no diffuse-field or free-field compensation curve was employed. If you’d like to learn more about what our measurements mean, click here. 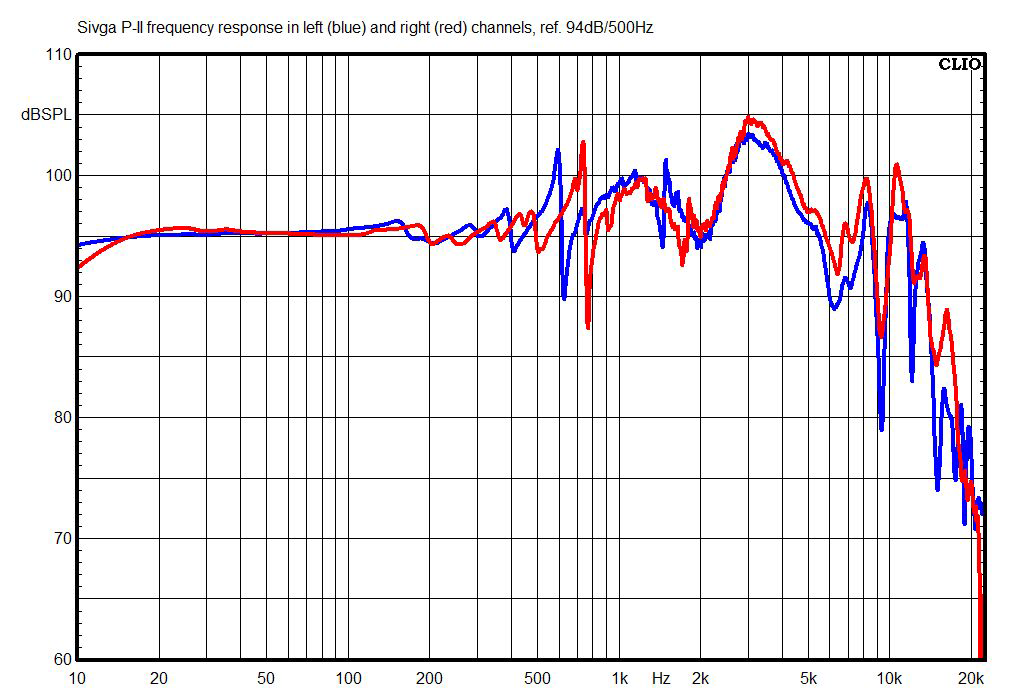 This chart shows the P-IIs’ frequency response. Normally with open-back planar-magnetics, we see a more or less flat line up to about 1.5kHz, then a peak centered at about 3kHz, and another peak around 6 or 8kHz. The P-IIs have those characteristics, but they also have a reinforcement peak at 600Hz in the left channel and 725Hz in the right channel, with a corresponding cancellation dip. (I’m not sure if this difference in frequencies is due to a channel mismatch, or to the differences between the left and right ears on the 43AG.) I can’t recall seeing an artifact like this, and don’t know what it would sound like. The midrange rise at around 1.5kHz is unusual, although not unheard-of. There’s also an unusually strong peak around 11kHz, although I doubt this bothered my 59-year-old ears much. 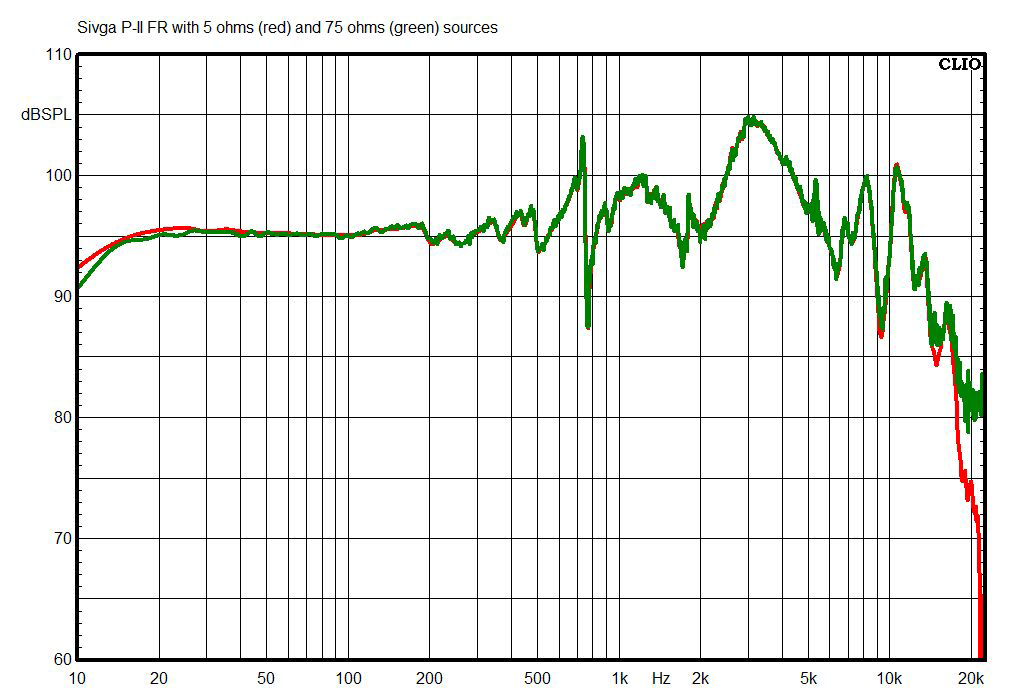 This chart shows how the P-IIs’ tonal balance changes when they’re used with a high-impedance source, such as a cheap laptop, some tube amps, or some professional headphone amps. As usual with planar-magnetics, there’s no difference—except at extremely high frequencies, where headphone measurements aren’t accurate or meaningful, and that might be a measurement artifact of some sort. 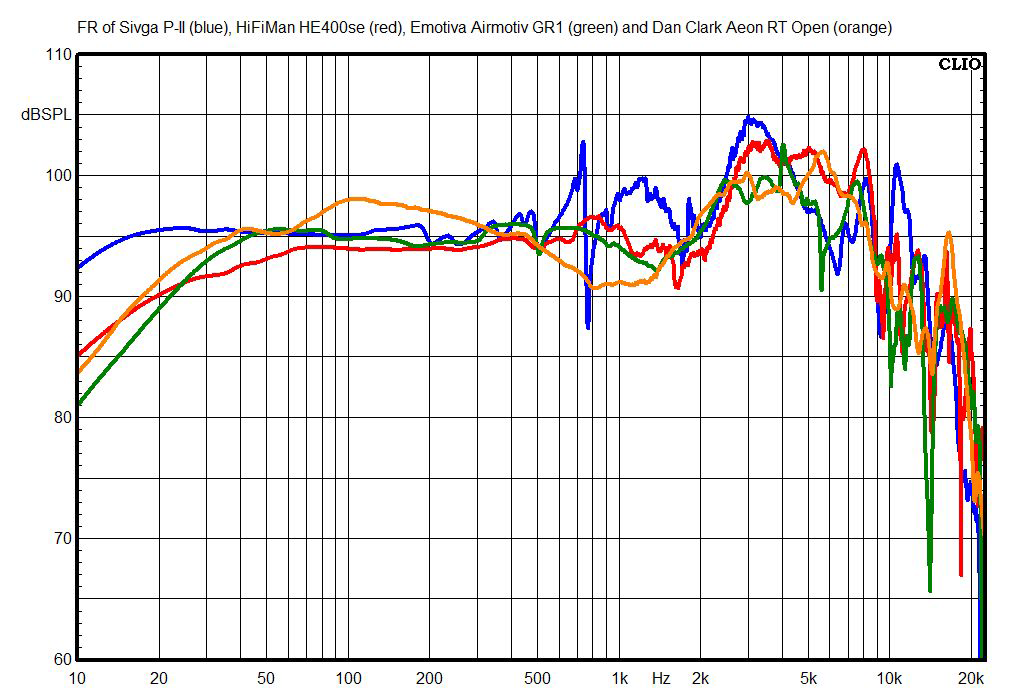 This chart shows the P-IIs’ right-channel response compared with three other affordable, open-back planar-magnetic models. It’s clear that the midrange artifacts of the P-IIs are something out of the ordinary, but what to my ears was more notable is the extra couple dB of energy at 3kHz, which is surely the cause of the subtle treble emphasis I sometimes heard. You can also see how unusual that 11kHz peak is; as I noted before, I doubt I heard it, but it seems quite possible that younger listeners might find it gives the P-IIs a somewhat bright sound. Or maybe it’ll make them sound airier. 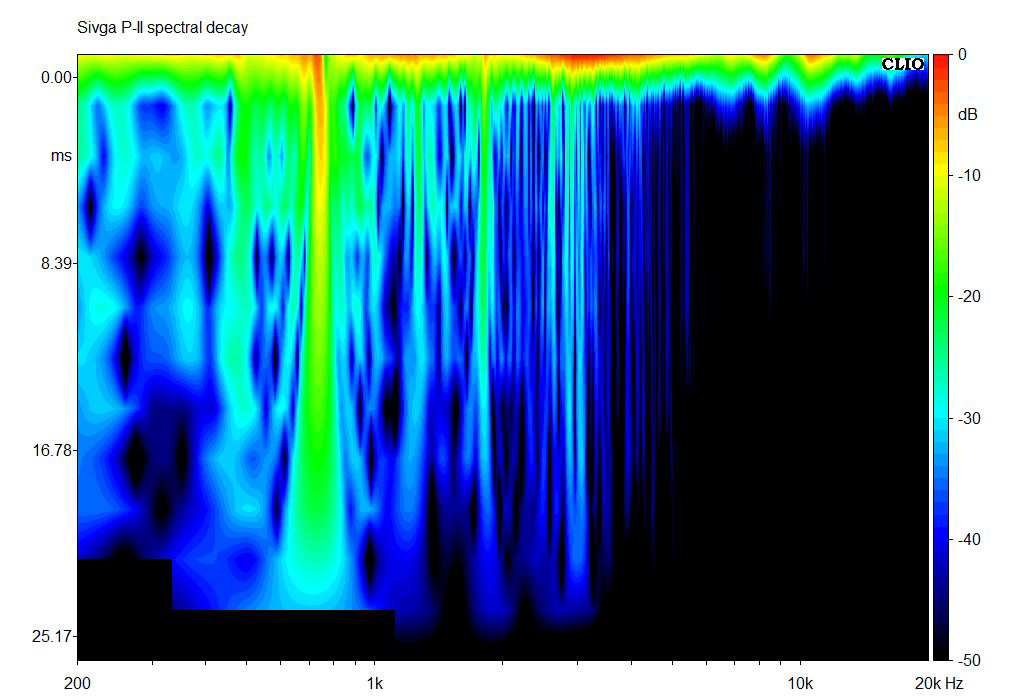 More weirdness can be seen in the P-IIs’ right-channel spectral-decay plot. That is a very, very strong resonance at about 700Hz, which corresponds to what I measured in the frequency response. The Q of this resonance is very high, which would make it less audible, and I sure didn’t seem to hear any problems in this part of the audioband. The “hash” of high-Q resonances you see between 1 and 5kHz are common with planar magnetics, and probably caused by reflections between the flat-panel driver and the metal plate of the ear/cheek simulator; I’m not sure how much, if anything, they contribute to the headphones’ sound, but I speculate they might add a sense of air and spaciousness. 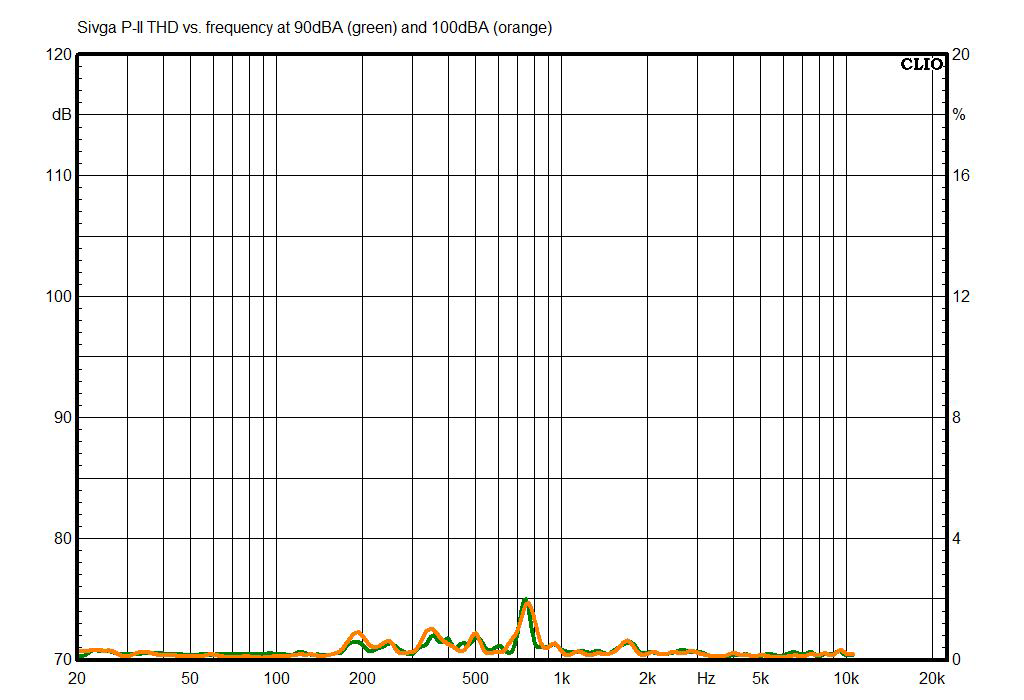 Here’s the THD vs. frequency chart, measured at 90dBA and 100dBA (both levels set with pink noise). As with most planar-magnetic headphones, distortion is extremely low. 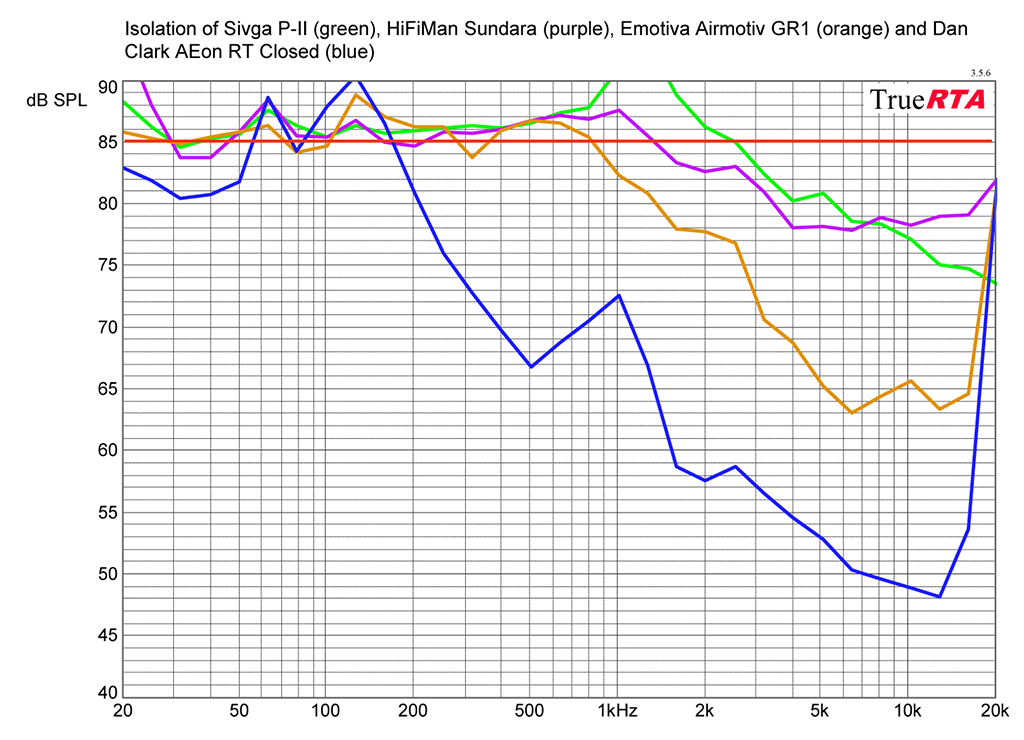 In this chart, the external noise level is 85dB SPL, and numbers below that indicate the degree of attenuation of outside sounds. The lower the lines, the better the isolation. I threw in a couple of open-back models and one closed-back model (the Dan Clark Æon RT Closed headphones). As you can see, the P-IIs have the least isolation of any of the open-back models, which means you’ll hear more external sounds intruding on your music—so use them in a quiet place. 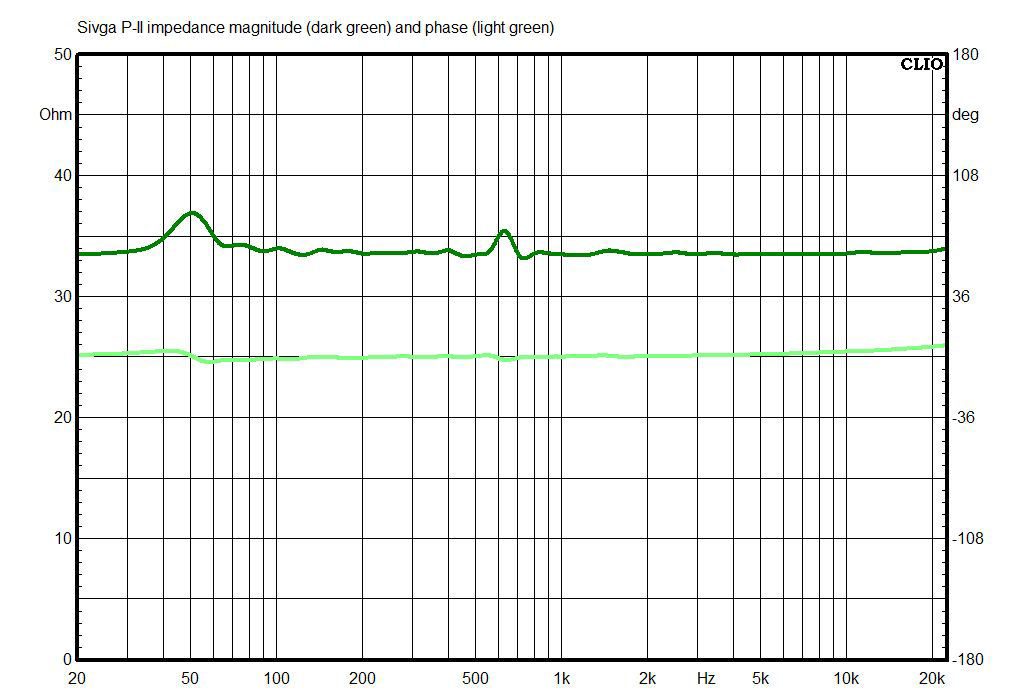 As with, I think, all the planar-magnetic models I’ve measured, the P-II headphones’ impedance magnitude and phase are both essentially flat.

Sensitivity, measured between 300Hz and 3kHz, using a 1mW signal calculated for 32 ohms rated impedance, is 97.6dB. That’s efficient enough that the P-IIs can deliver reasonably loud volume from mobile devices that have headphone jacks.