I measured the 64 Audioo U6t earphones using laboratory-grade equipment: a GRAS Model 43AG ear/cheek simulator/RA0402 ear simulator with KB5000/KB5001 simulated pinnae, and an Audiomatica Clio 12 audio analyzer. For isolation measurements, I used a laptop computer running TrueRTA software with an M-Audio MobilePre USB audio interface. For most measurements, the headphones were amplified using a Musical Fidelity V-CAN amplifier; I used a Schiit Magnius amplifier for distortion measurements. I used the foam tips for all measurements because they sealed much more securely in the ear simulator. These are “flat” measurements; no diffuse-field or free-field compensation curve was employed. If you’d like to learn more about what our measurements mean, click here. 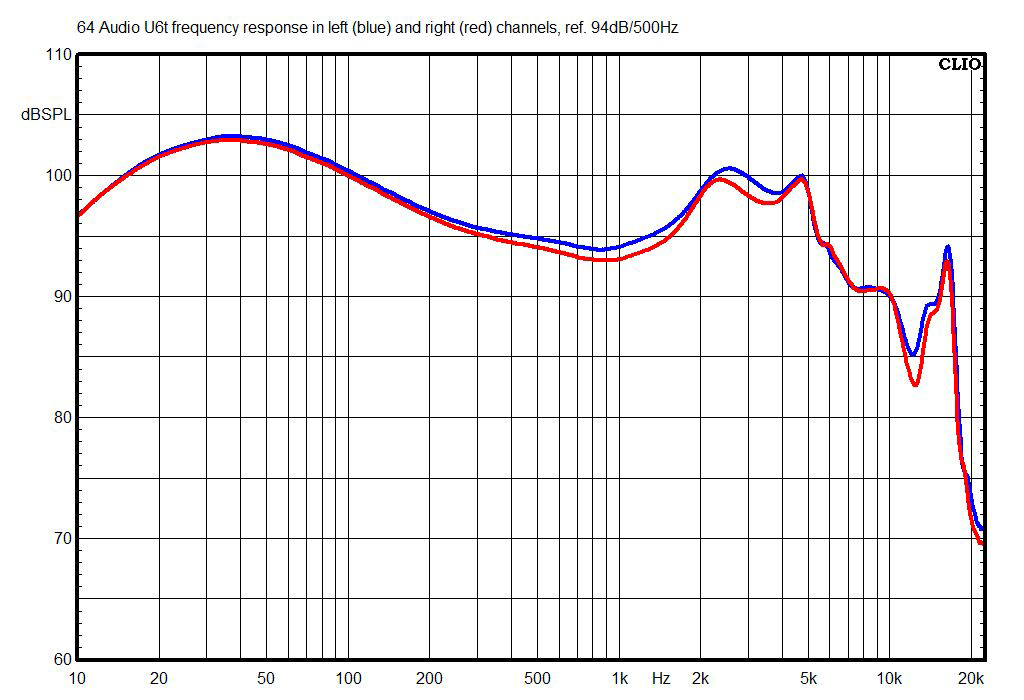 This chart shows the U6t earphones’ frequency response with the factory-installed M15 modules. It’s fairly similar to the Harman curve, but with less treble. 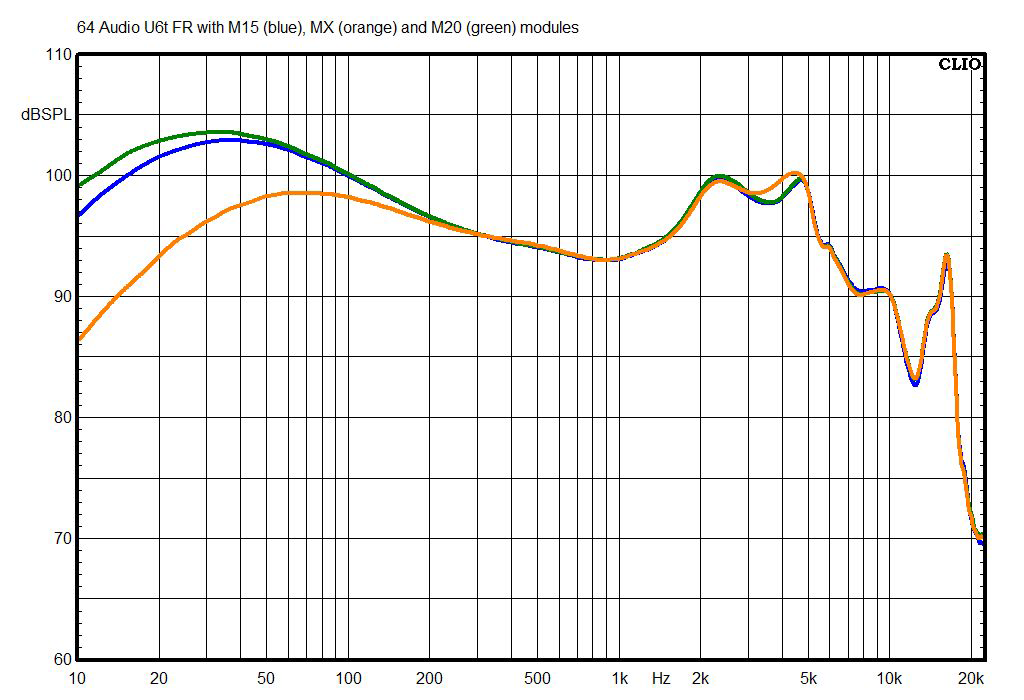 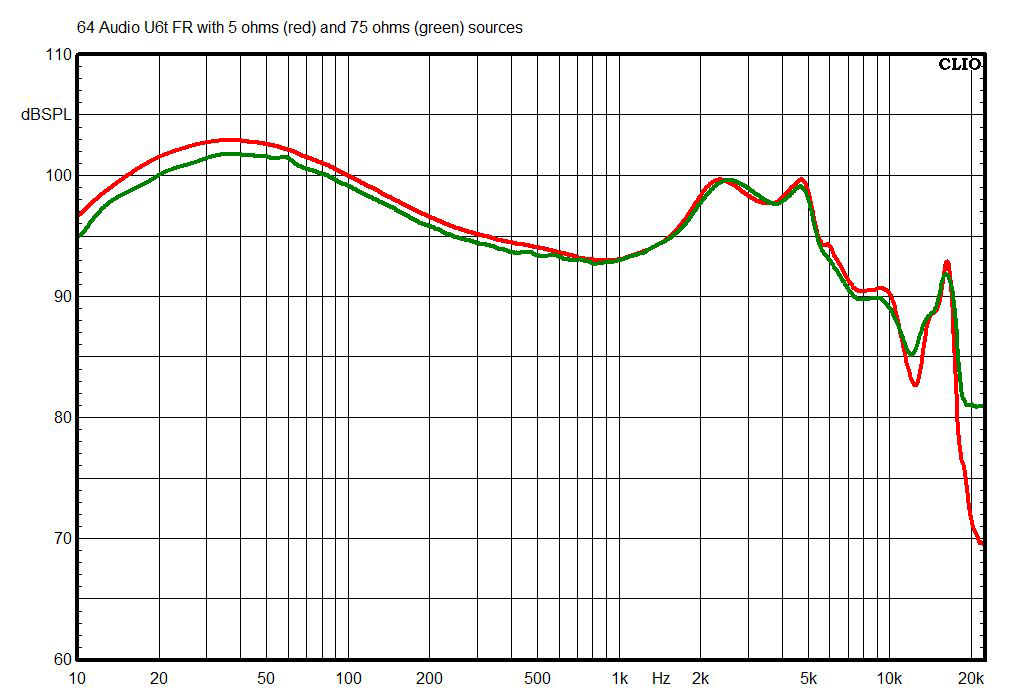 This chart shows how the U6t’s’ tonal balance changes when they’re used with a high-impedance source, such as a cheap laptop, some tube amps, or some professional headphone amps. There’s very little difference, just a dB or two less bass with the high-impedance source. So LID seems to work pretty well; with most balanced-armature earphones, we’d see a much larger difference here. 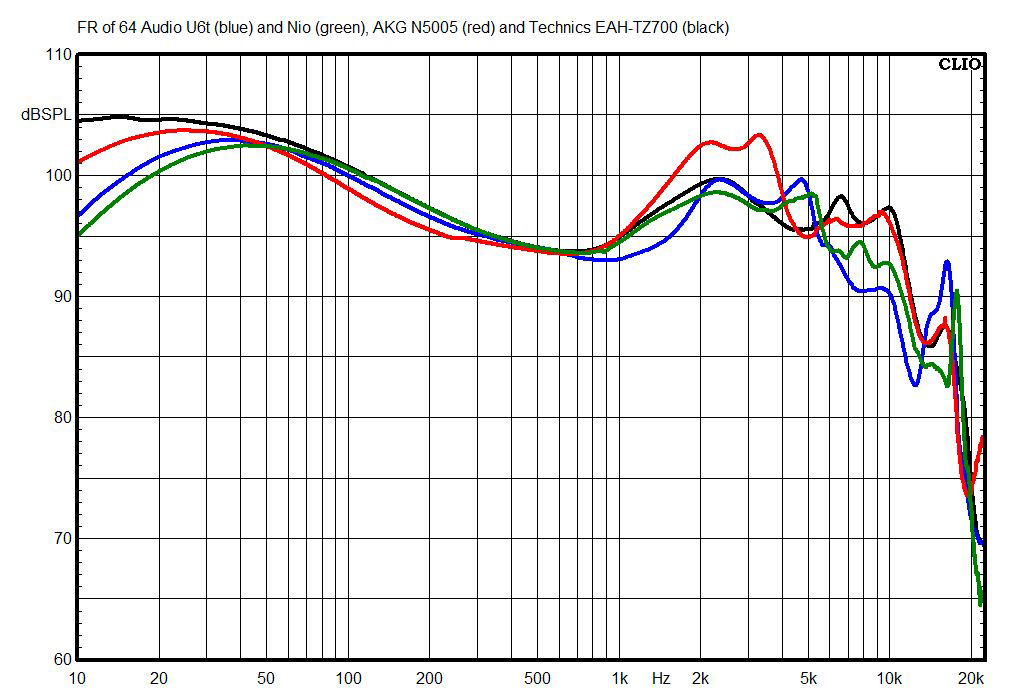 This chart shows the U6t’s’ right-channel response compared with the 64 Audio Nios, the Technics EAH-TZ700s (another fave of mine in this price range), and the AKG N5005s, the passive earphones said to be closest to the Harman curve. The U6t’s have about 1.5dB more low treble and a couple dB less mid-midrange than the Nios—so this measurement does not bear out 64 Audio’s statements about the U6t’s having a “softer sound.” However, they do have 3 to 5dB less treble than the AKG N5005 earphones. It’s hard to say which of these curves any particular listener will prefer, but considering that the differences are mostly related to the amount of treble rather than specific anomalies in any particular band, I doubt many listeners would think any of these earphones are far off the mark. 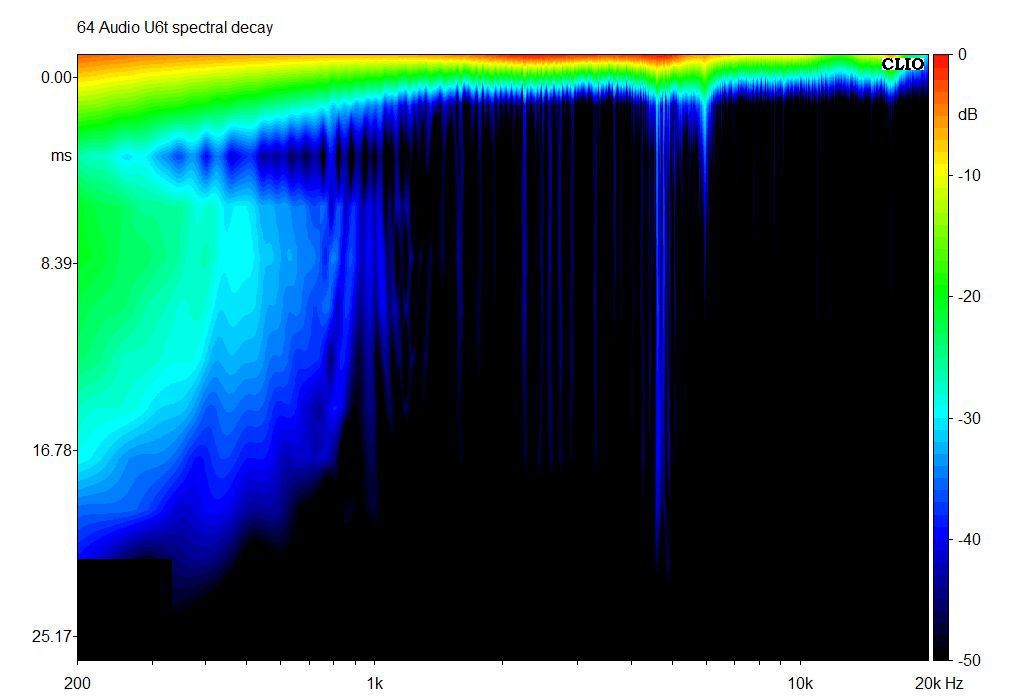 The U6t’s’ spectral-decay plot looks clean, with no significant resonances. 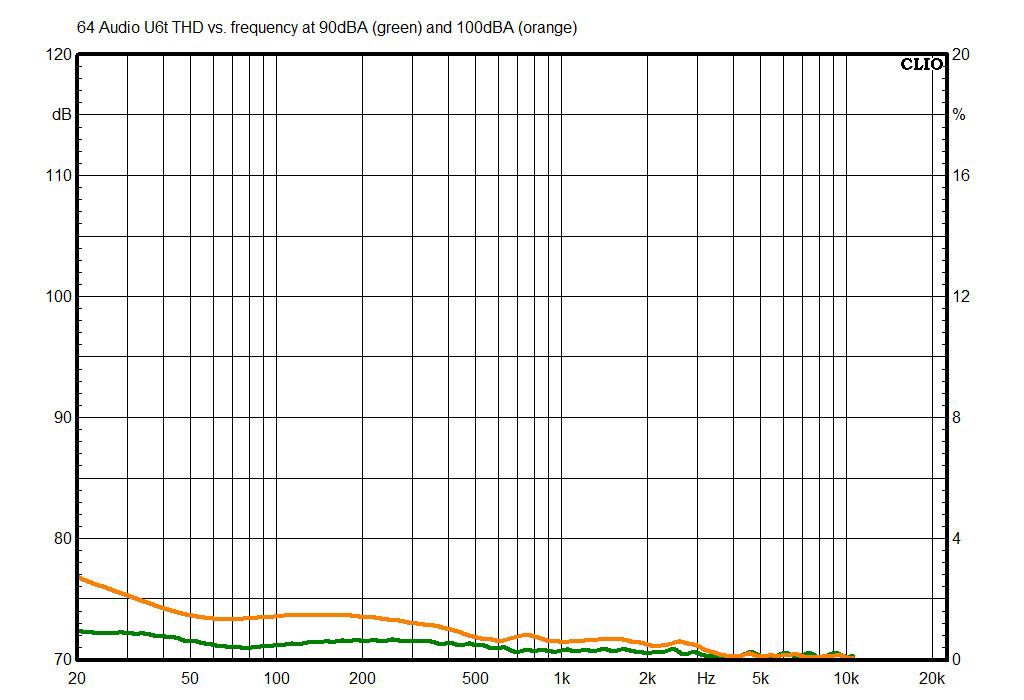 Total harmonic distortion of the U6t earphones remains below 2% except at the extremely loud level of 100dBA, and below 30Hz—so there’s no chance you’d notice it. 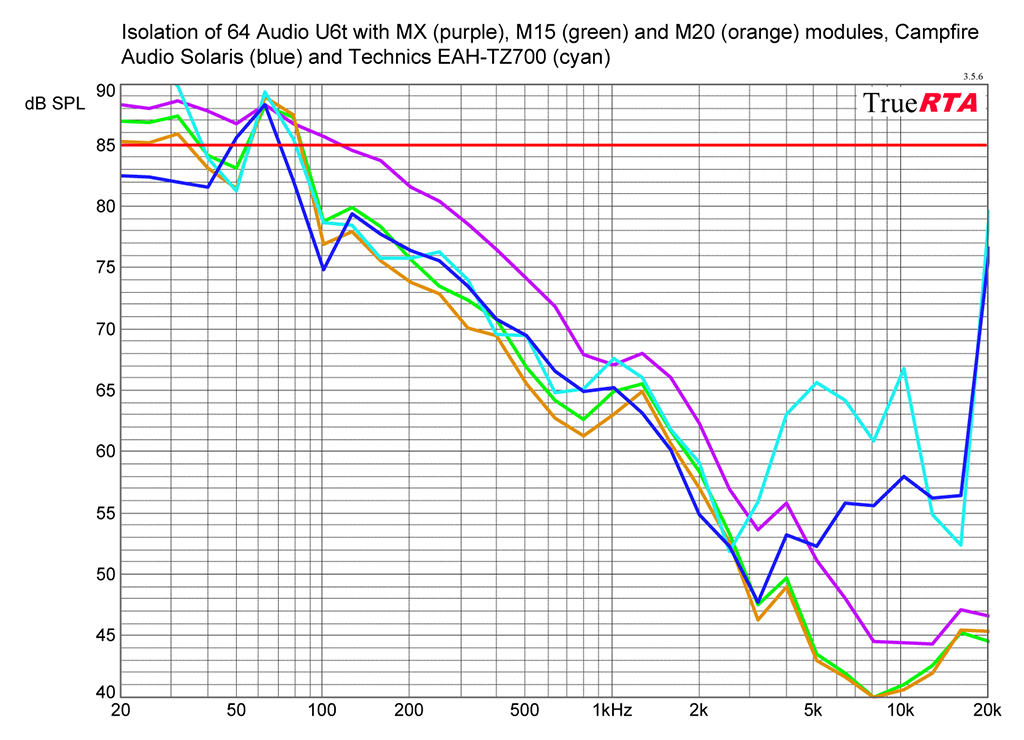 In this chart, the external noise level is 85dB SPL, and numbers below that indicate the degree of attenuation of outside sounds. The lower the lines, the better the isolation. As you can see, the U6t’s offer isolation similar to that of other high-end earphones. I’ve also included the results with the different modules. The M20 module delivers only a dB or two more isolation than the M15, so its effects appear to be oversold. The M15 gives about 5 to 8dB more isolation than the MX module. 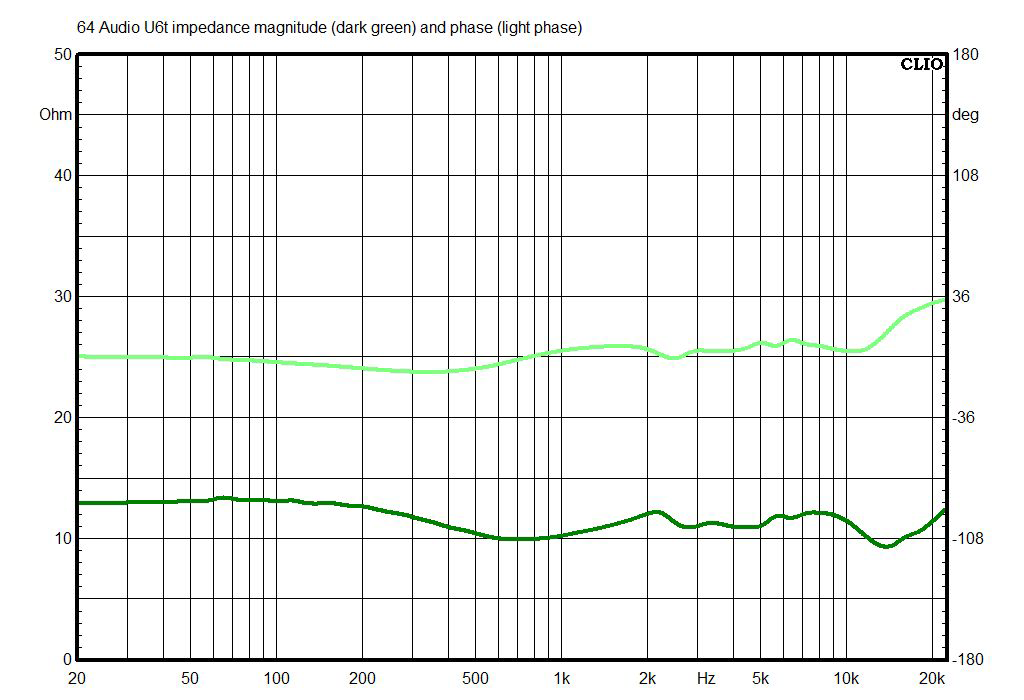 The U6t earphones’ impedance curve is pretty close to flat, which is quite unusual for earphones using balanced armatures.

Sensitivity, measured between 300Hz and 3kHz, using a 1mW signal calculated for 10 ohms rated impedance, is 107.4dB. That’s very high, so the U6t’s should be able to deliver reasonably loud volume from any mobile device with a headphone jack.

Bottom line: The 64 Audio U6t earphones are clearly going to sound less bright than (or duller than, depending on your perspective) Harman curve earphones, but that should sound like an overall tonal balance tilt rather than a frequency-specific coloration. You might like it better than the standard Harman curve, or not as much. (And it’s important to remember that there are three variants of the Harman curve!) So all’s quite OK here.