Link: reviewed by Doug Schneider on SoundStage! Hi-Fi on July 15, 2021

The C-2850 (as tested) is an analog line-level preamp offering several balanced (XLR) and unbalanced (RCA) inputs and outputs, and a headphone output (¼″ TRS). The volume control is implemented using a proprietary process Accuphase calls “Accuphase Analog Vari-gain Amplifier (AAVA).” This system works by converting the incoming analog signal from a voltage to a current in 16 weighted steps. Each step is digitally controlled and switched in or out of the circuit depending on the encoded position of the volume knob. The current from each step switched into the circuit is summed and converted back to a voltage. The 16 circuit steps are analogous to on/off bits, and therefore, the volume system allows for 65536 (216) discrete positions. Accuphase has configured the volume control to provide 251 steps ranging from -95dB to 0dB. Between -95 and -85dB, step sizes are 5dB; between -80 and -74dB, 3dB; -74 to -60dB, 2dB; -60 to -50dB, 1 dB; -50 to -30dB, 0.5dB; -30 to -8, 0.2dB; and finally between -8 to 0dB, 0.1dB. Considering both the exquisite channel tracking (see table below) and the variable, ultra-fine adjustments, this may be the finest digitally controlled analog volume control available in a consumer product.

I found small differences in THD and noise between the RCA and XLR inputs and outputs for the same output voltage. The RCA outputs exhibited about 11dB (unweighted) more noise than the XLR outputs, while the RCA inputs (when measured at the XLR outputs) measured slightly worse in terms of THD compared to the XLR inputs (0.0005% vs 0.0003% at 1kHz). Unless otherwise stated, all measurement data below are with the balanced inputs and outputs, at 2Vrms with volume set to unity gain (-12dB). Signal-to-noise ratios (SNR) were measured with the volume at maximum position.

The table below summarizes the measurements published by Accuphase for the C-2850 compared directly against our own. The published specifications are sourced from Accuphase’s website, either directly or from the manual available for download, or a combination thereof. With the exception of frequency response, where the Audio Precision bandwidth is set at its maximum (DC to 1MHz), assume, unless otherwise stated, a measurement input bandwidth of 10Hz to 90kHz, and the worst case measured result between the left and right channel.

* The discrepancy in balanced output impedance may be due to Accuphase specifying this value for the inverting and noninverting pins separately. Our measurement considers both inputs on the balanced connector together. Treated separately, our measurement would be halved, or 48k ohms. 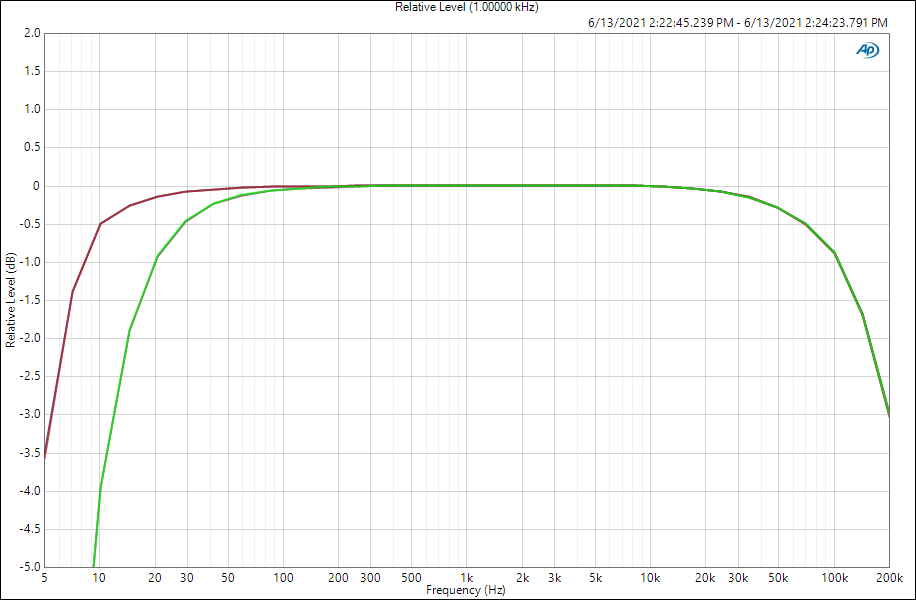 In our measured frequency response plot above, the C-2850 is near perfectly flat within the audioband (20Hz to 20kHz). The blue/red traces are without the 10Hz filter engaged, the purple/green traces with the 10Hz filter. These data do not quite corroborate Accuphase’s claim of 3Hz to 200kHz +0/-3dB (measured down to 5Hz). While at the upper end of the frequency spectrum, the -3dB point was measured at 200kHz, at low frequencies, Accuphase’s claim would imply that the C-2850 is DC coupled, whereas our measurements indicate AC coupling. Nevertheless, at the extremes of the audioband, we measured only -0.35dB at 20Hz (-1dB with filter on) and -0.04dB at 20kHz. The C-2850 can be considered a high-bandwidth audio device. In the graph above and most of the graphs below, only a single trace may be visible. This is because the left channel (blue or purple trace) is performing identically to the right channel (red or green trace), and so they perfectly overlap, indicating that the two channels are ideally matched. 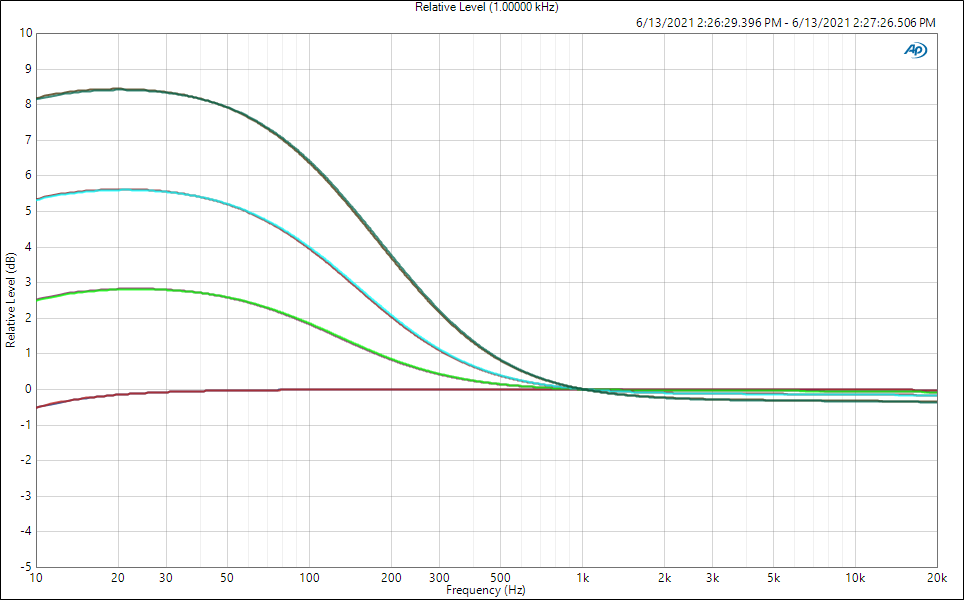 Above are four frequency response plots for the balanced line-level input, with the Compensator control set to Off (blue/red), 1 (purple/light green), 2 (pink/cyan), and 3 (brown/dark green). We see what appears to be conventional bass-control EQ with various degrees of gain. At position 1, just under +3dB at 20Hz, position 2 yields about +5.5dB at 20Hz, and position 3 about +8.3dB. 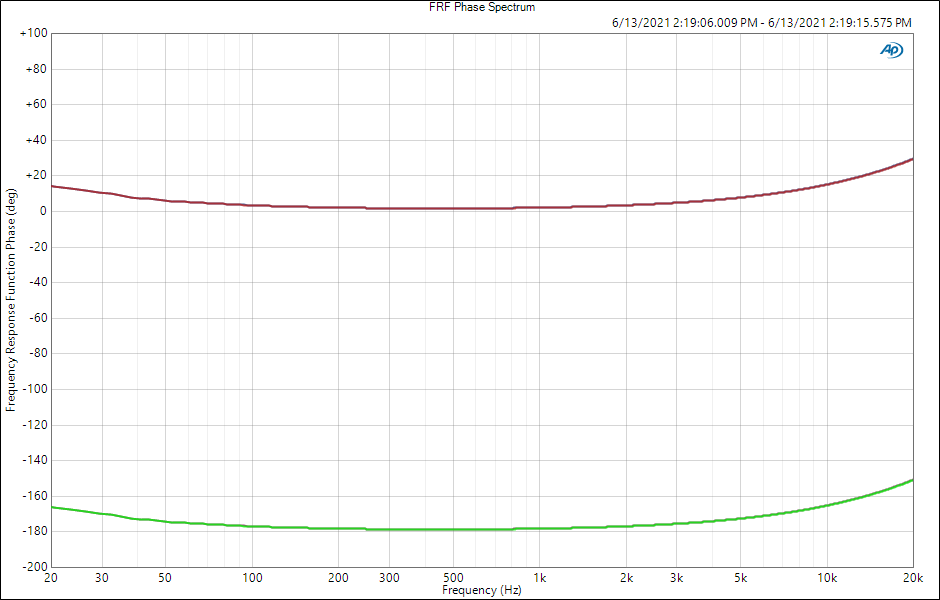 Above is the phase response plot from 20Hz to 20kHz, with the Phase control disabled (blue/red) and enabled (purple/green). The C-2850 does not invert polarity, while setting the Phase control to Invert does exactly that—it provides -180 degrees of shift. Since these data were collected using the balanced input and output, there is no phase inversion. However, since Accuphase assigns pins 2/3 on their XLR connectors as inverting/noninverting, the opposite to what we typically find in North American or European products, feeding the signal into an unbalanced input and measuring on the balanced output would yield the exact opposite of what is shown above. 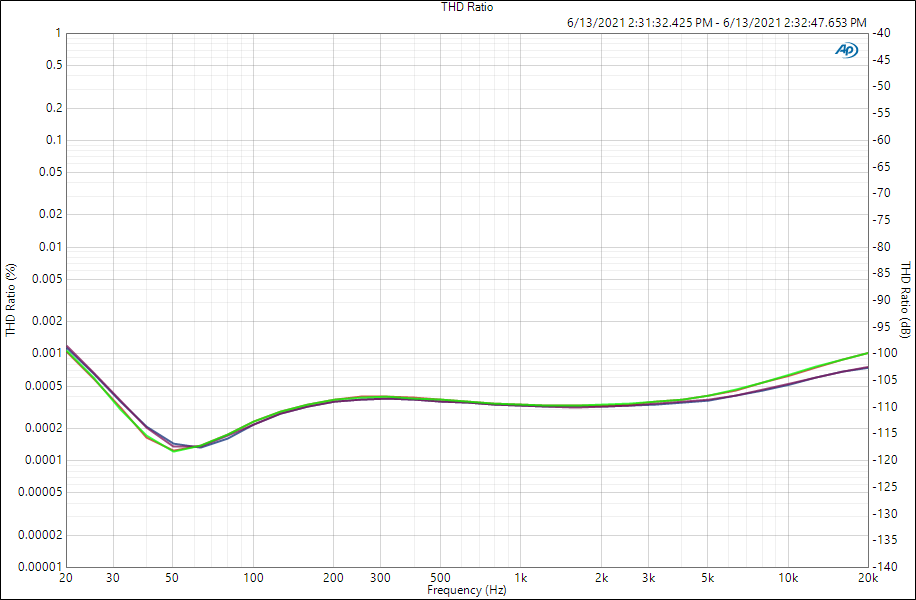 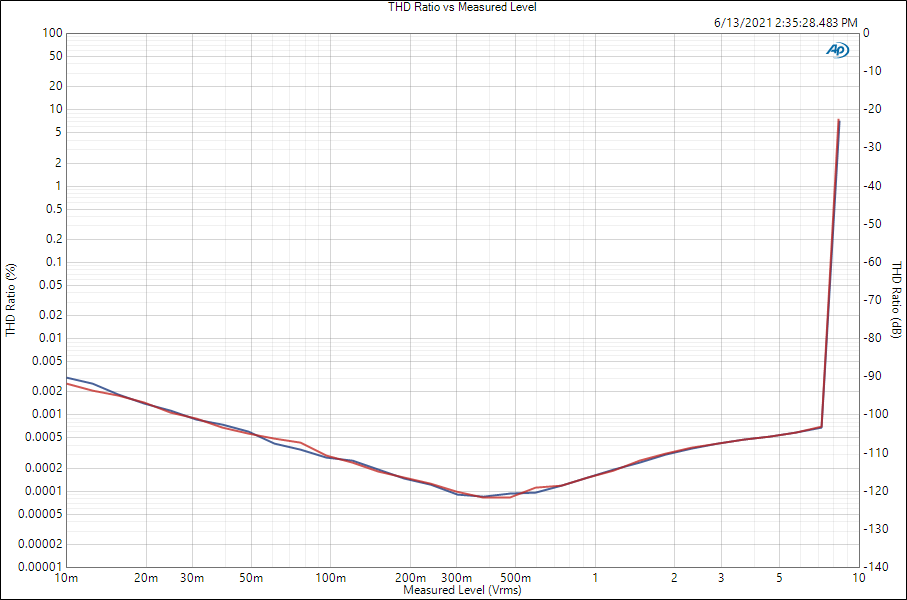 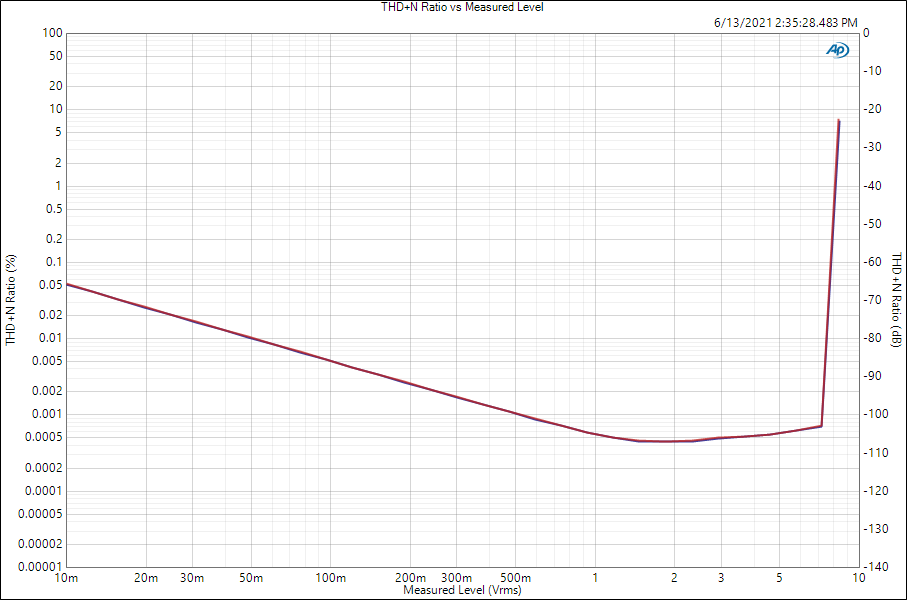 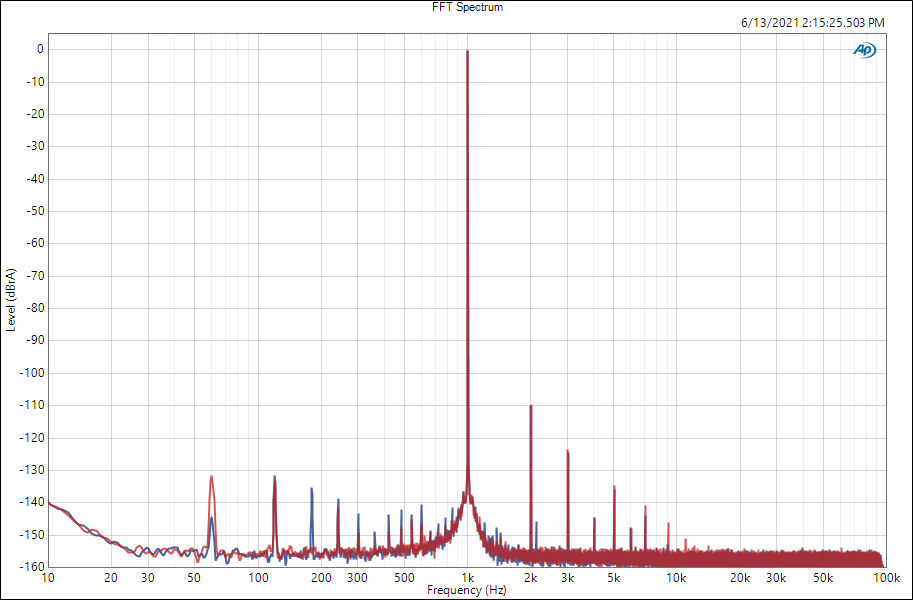 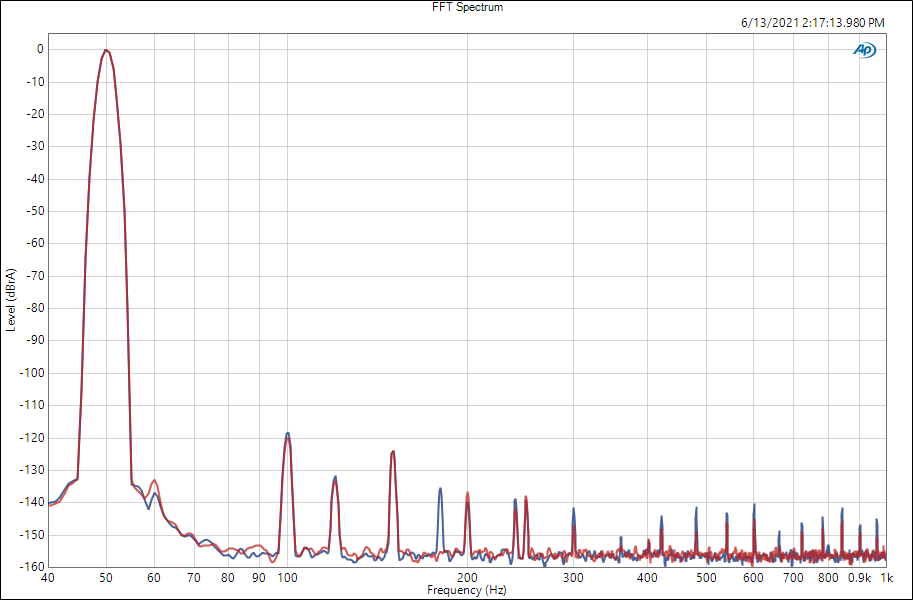 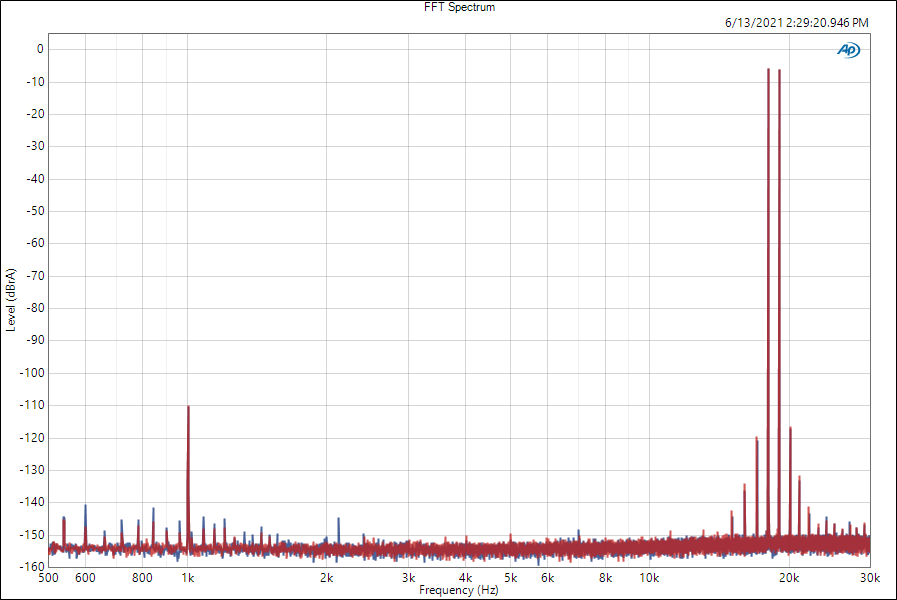 Shown above is an FFT of the intermodulation (IMD) products for an 18kHz + 19kHz summed sinewave stimulus tone measured at the output into a 200k-ohm load. The input RMS values are set at -6.02dBrA so that, if summed for a mean frequency of 18.5kHz, would yield 2Vrms (0dBrA) at the output. We find that the second-order modulation product (i.e., the difference signal of 1kHz) is at -110dBrA, or 0.0003%, while the third-order modulation products, at 17kHz and 20kHz are at and just above -120dBrA, or 0.0001%. 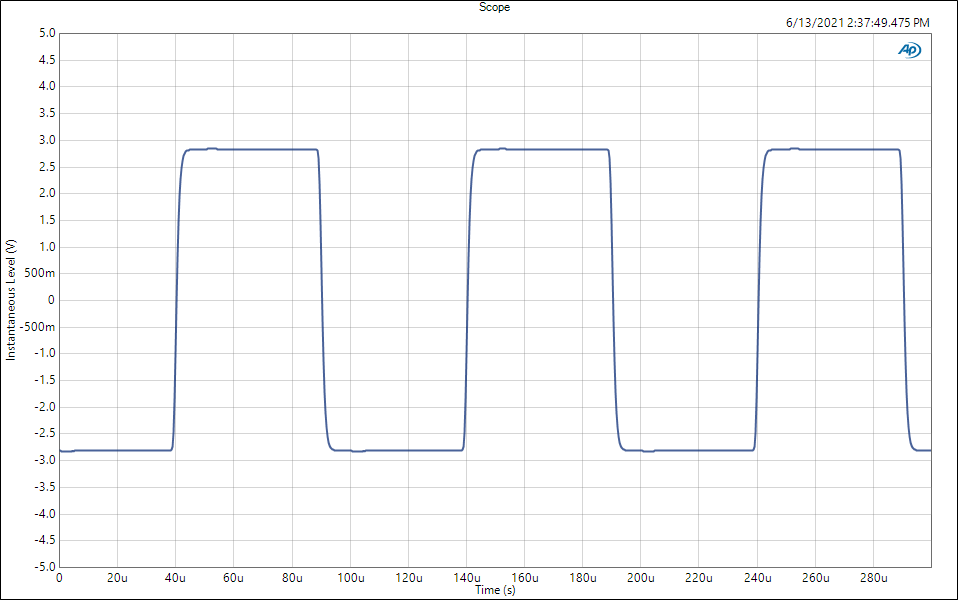 Above is the 10kHz square-wave response at the output into 200k ohms. Due to limitations inherent to the Audio Precision APx555 B Series analyzer, this graph should not be used to infer or extrapolate the C-2850’s slew-rate performance. Rather, it should be seen as a qualitative representation of its high bandwidth. An ideal square wave can be represented as the sum of a sinewave and an infinite series of its odd-order harmonics (e.g., 10kHz + 30kHz + 50kHz + 70kHz . . .). A limited bandwidth will show only the sum of the lower-order harmonics, which may result in noticeable undershoot and/or overshoot, and softening of the edges. The C-2850’s reproduction of the 10kHz square wave is squeaky clean, with very sharp edges devoid of undershoot and overshoot.