Link: reviewed by Philip Beaudette on SoundStage! Hi-Fi on June 15, 2021

All measurements, with the exception of signal-to-noise (SNR) or as otherwise stated, were made with the volume set to unity gain for the preamplifier (about 2 o’clock) as measured at the pre-outputs. Signal-to-noise ratio (SNR) measurements were made with the volume control set to maximum. At the unity gain volume position, to achieve 10W into 8 ohms, 310mVrms was required at the RCA line-level input.

The table below summarizes the measurements published by Bryston for the B1353 compared directly against our own. The published specifications are sourced from Bryston’s website, either directly or from the manual available for download, or a combination thereof. With the exception of frequency response, where the Audio Precision bandwidth is set at its maximum (DC to 1MHz), assume, unless otherwise stated, a measurement input bandwidth of 10Hz to 90kHz, and the worst-case measured result between the left and right channel.

Our primary measurements for the B1353 integrated amplifier as a whole revealed the following using the RCA line-level inputs (unless specified, assume a 1kHz sinewave, 10W output, 8-ohm loading, 10Hz to 90kHz bandwidth):

For the continuous dynamic power test, the Bryston able to sustain 159W into 8 ohms using an 80Hz tone for 500ms, alternating with a signal at -10dB of the peak (15.7W) for five seconds, for five continuous minutes without inducing a fault or the initiation of a protective circuit. Although the peak power level for the test was just below the 1% THD+N level, the Clip indicator never light up during the high power bursts during the five-minute measurement. This test is meant to simulate sporadic dynamic bass peaks in music and movies. During the test, the B1353 heatsinks were quite warm to the touch, where touching for more than five seconds would induce pain. 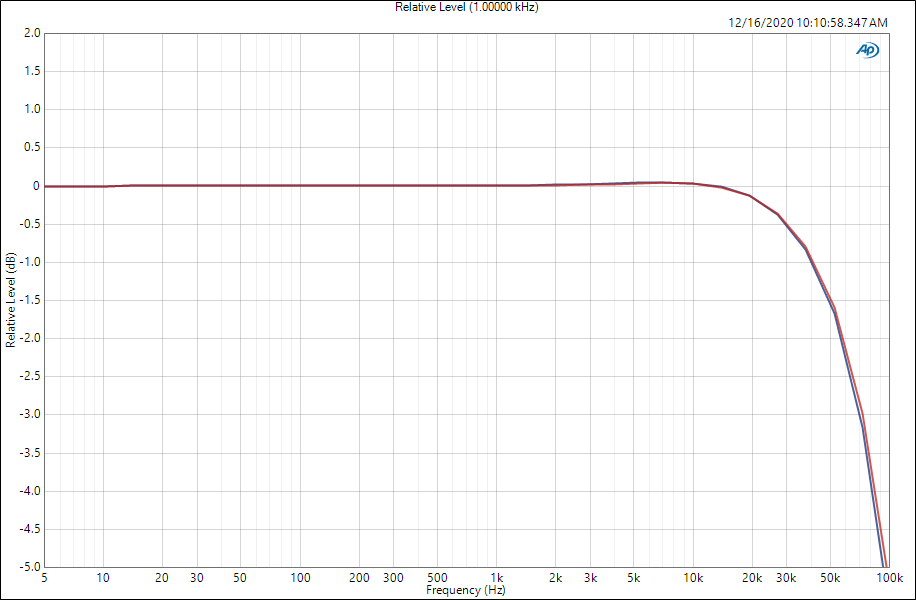 In our measured frequency response plot above, the B1353 is perfectly flat within the audioband (20Hz to 20kHz) and beyond. These data come very close to corroborating Bryston’s claim of 20Hz to 20kHz +/-0.05dB (although Bryston claims this for the preamp section, while the graph above is for the integrated amp as a whole). The B1353 is -0.02dB at 5Hz, -0.14dB at 20kHz, and -3dB at about 70kHz. The B1353 should not be considered a high-bandwidth audio device, as the -3dB point is below 100kHz. In the chart above and most of the charts below, only a single trace may be visible. This is because the left channel (blue or purple trace) is performing identically to the right channel (red or green trace), and so they perfectly overlap, indicating that the two channels are ideally matched. 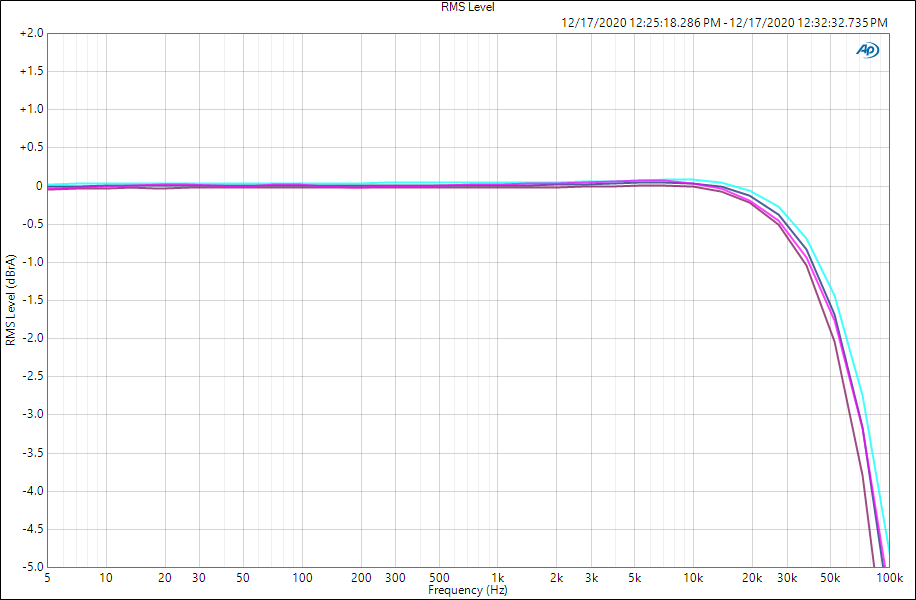 The chart above shows RMS level (relative to 0dBrA, which is 1W into 8ohms or 2.83Vrms) as a function of frequency, swept from 5Hz to 100kHz. The blue plot is into an 8-ohm load, the purple is into a 4-ohm load, the pink is an actual speaker (Focal Chora 806, measurements can found here), and the cyan is no load connected. The chart below . . . 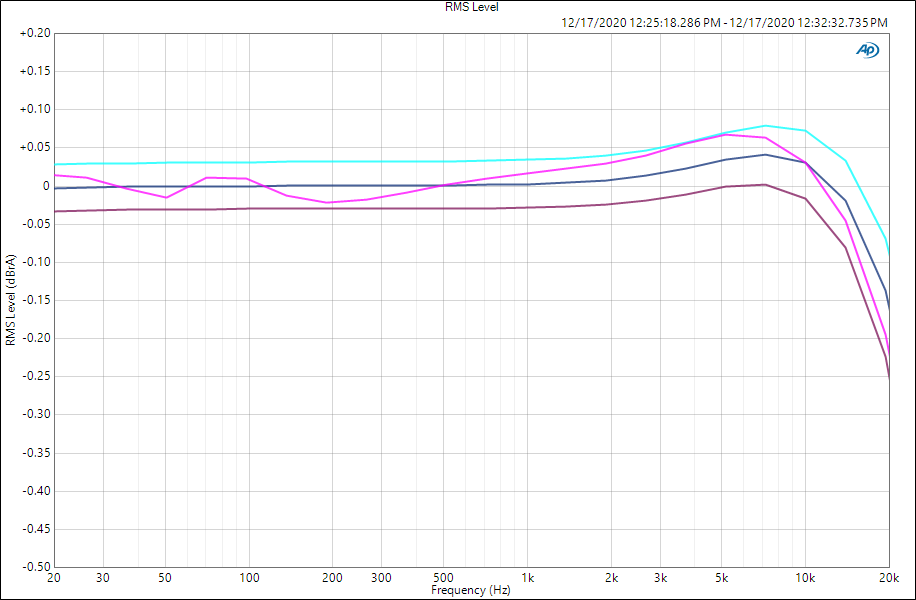 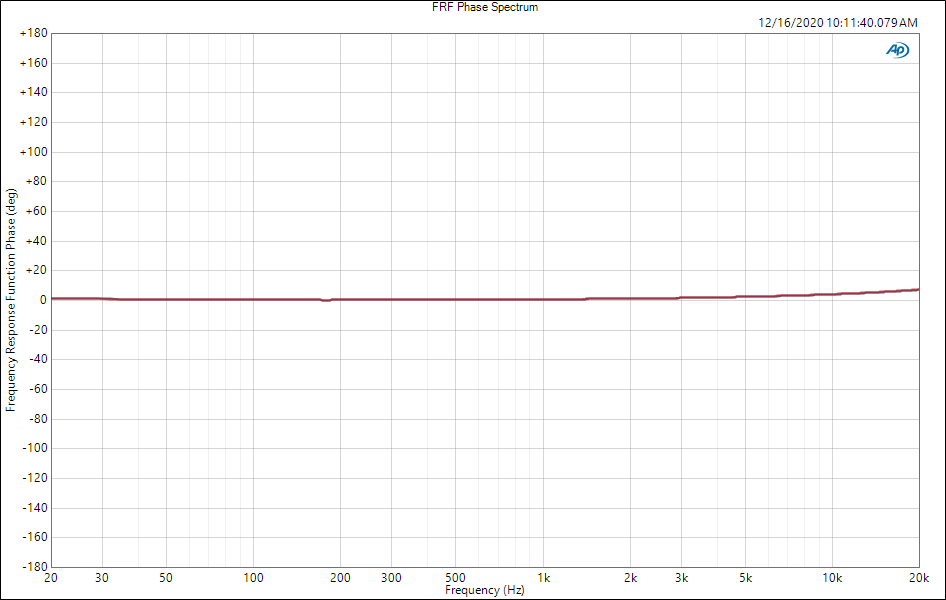 Above is the phase response plot from 20Hz to 20kHz. The B1353 does not invert polarity, and the plot shows very little phase shift, with a worst case of under +10 degrees at 20kHz. 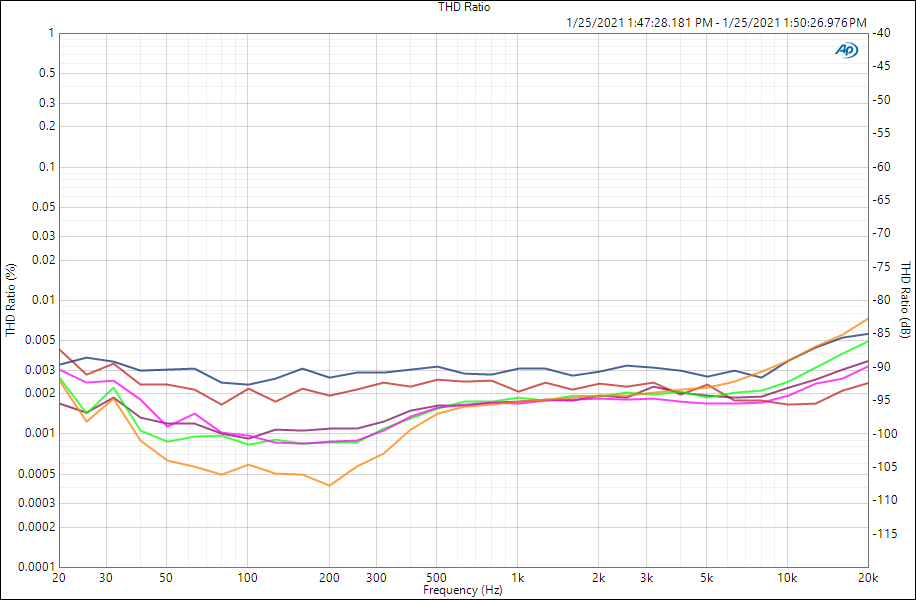 The chart above shows THD ratios at the output into 8 ohms as a function of frequency (20Hz to 20kHz) for a sinewave input stimulus. The blue and red plots are for left and right at 1W output into 8 ohms, purple/green at 10W, and pink/orange at full rated power (135W). The power was varied using the volume control. At all frequencies and power levels, THD ratios varied between about 0.0005% and 0.005%. As is typical, there is a rise in THD values at high frequencies, however, the differences (about 5dB increase from 10kHz to 20kHz) are small.  The right channel also generally outperforms the left, especially at lower frequencies, by as much as 5dB. The lowest THD ratio values were found at 135W for the right channel between 100 and 200Hz, at 0.0005%. The highest THD values were also found at high power, at about 0.007% at 20kHz also for the right channel. At 1kHz, the 10W and 135W data measured the same at just below 0.002% THD, while the 1W data is worse at 0.003/0.002% (left/right channels).

THD ratio (unweighted) vs. output power at 1kHz into 4 and 8 ohms 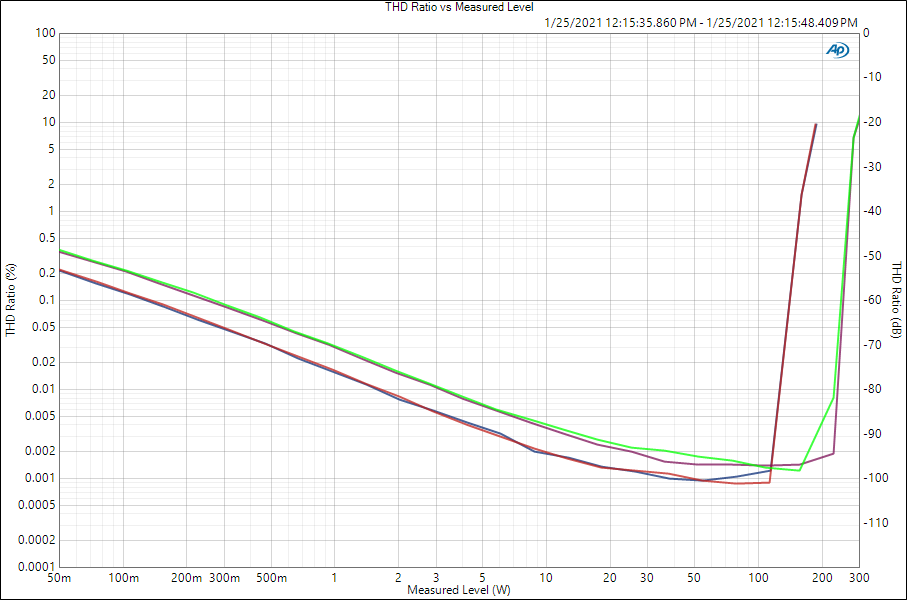 THD+N ratio (unweighted) vs. output power at 1kHz into 4 and 8 ohms 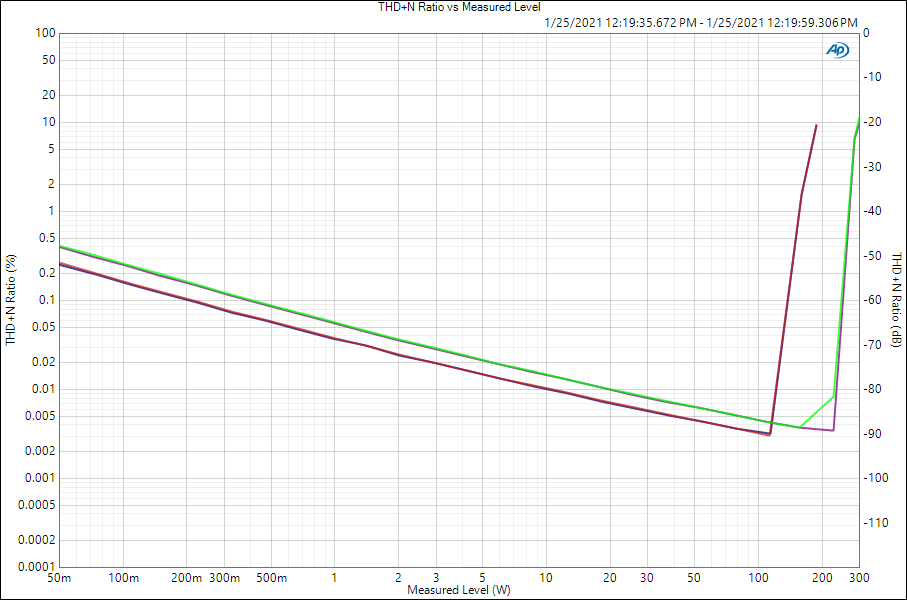 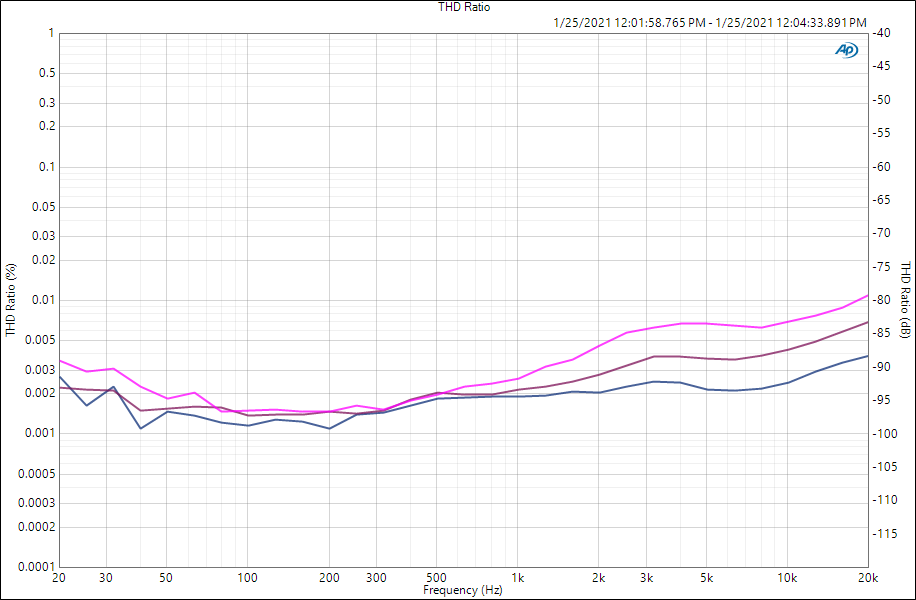 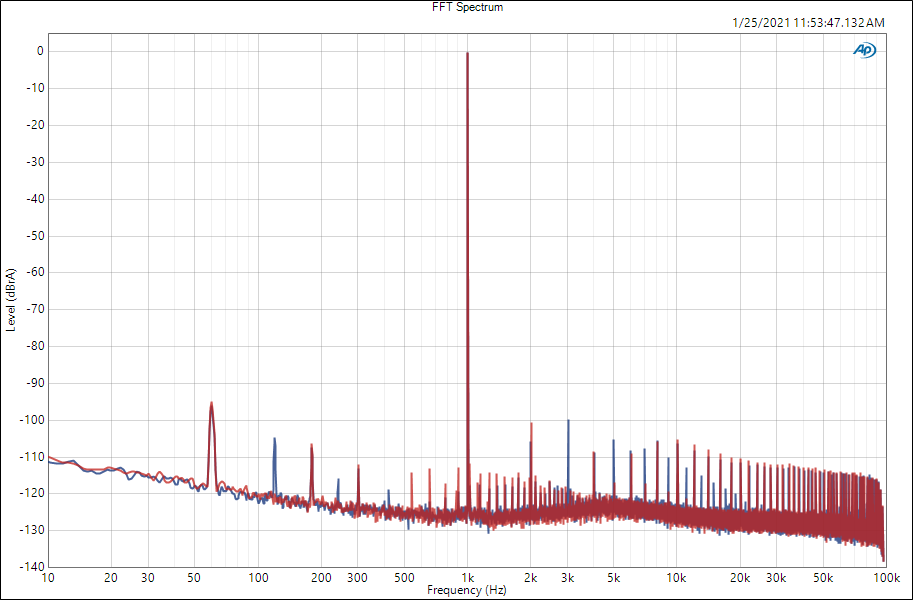 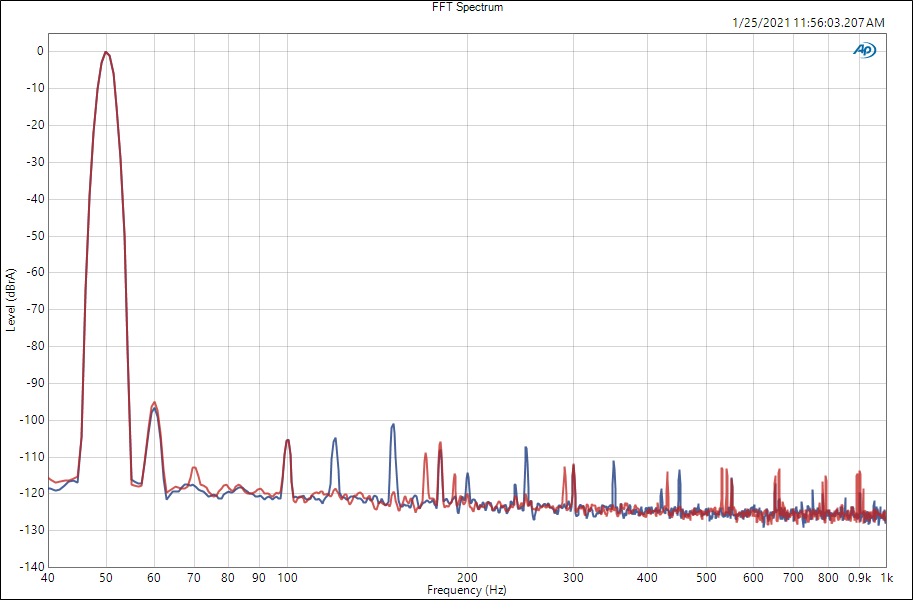 Shown above is the FFT for a 50Hz input sinewave stimulus measured at the output across an 8-ohm load at 10W output. The X axis is zoomed in from 40Hz to 1kHz, so that peaks from noise artifacts can be directly compared against peaks from the harmonics of the signal. The most predominant signal harmonic peak is that of the 3rd harmonic (150Hz) at about -100dBrA, or 0.001%, but only on the left channel, while the signal’s second harmonic peak (100Hz) is visible at -105dBrA, or 0.0005%, for both channels. The most predominant noise peak is at the fundamental (60Hz) at -95dBrA, or 0.005%, then at -105dBrA from the left channel only at the second harmonic (120Hz). 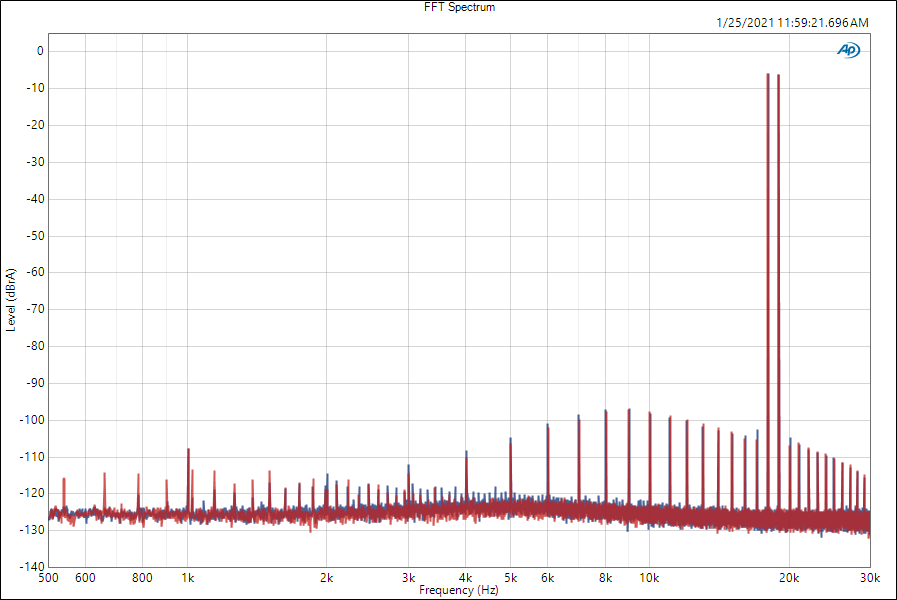 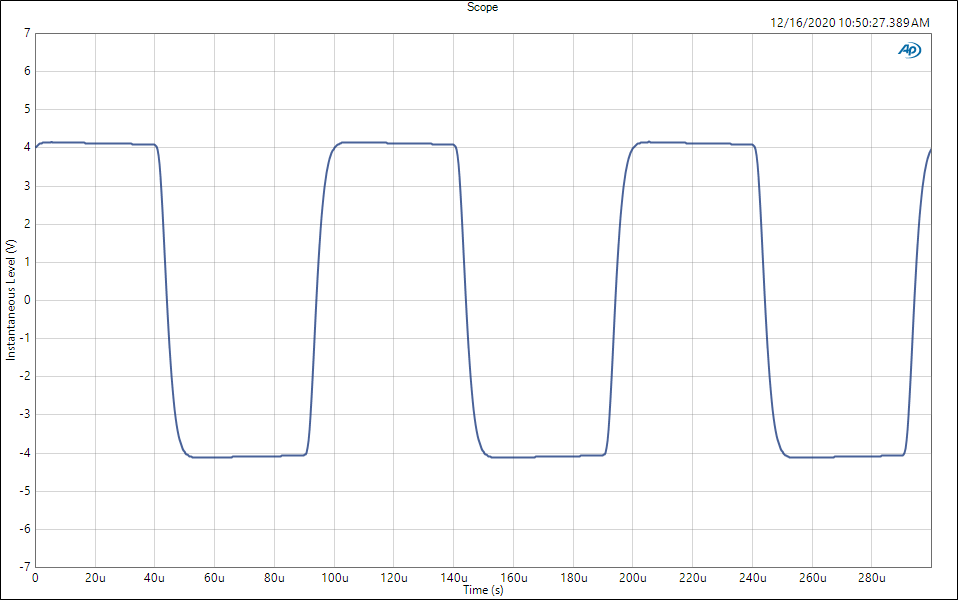 Above is the 10kHz square-wave response at roughly 10W into 8 ohms. Due to limitations inherent to the Audio Precision APx555 B Series analyzer, this graph should not be used to infer or extrapolate the Bryston’s slew-rate performance. Rather, it should be seen as a qualitative representation of its relatively extended bandwidth. An ideal square wave can be represented as the sum of a sinewave and an infinite series of its odd-order harmonics (e.g., 10kHz + 30kHz + 50kHz + 70kHz . . .). A limited bandwidth will show only the sum of the lower-order harmonics, which may result in noticeable undershoot and/or overshoot, and softening of the edges. The B1353 reproduction of the 10kHz squarewave can be considered clean, with slightly rounded edges devoid of undershoot and overshoot. 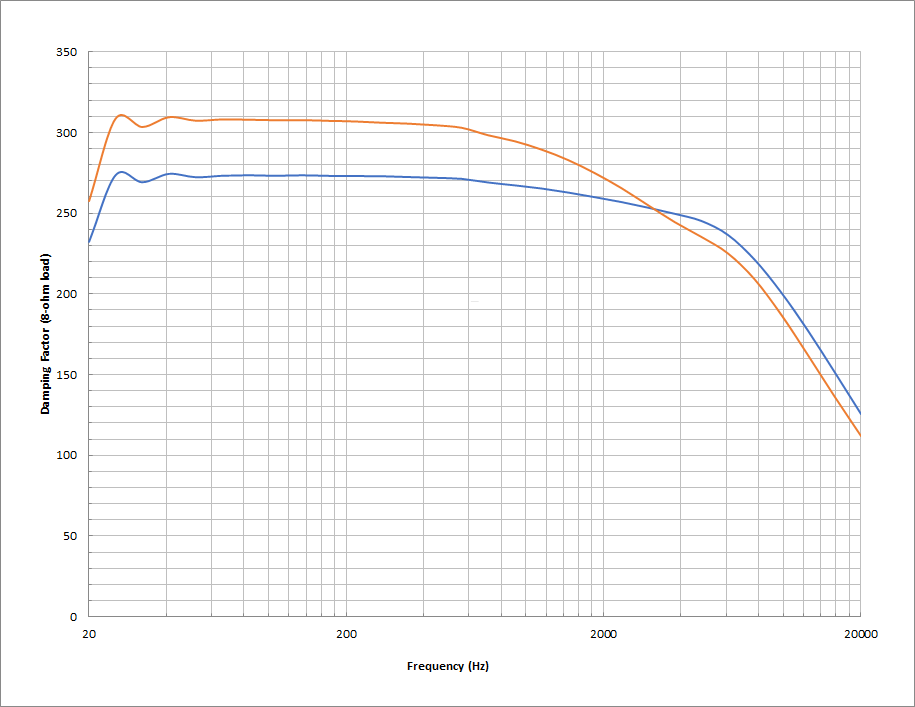