I measured the Soundcore Life Q35 headphones using laboratory-grade equipment: a GRAS Model 43AG ear/cheek simulator/RA0402 ear simulator with KB5000/KB5001 simulated pinnae, and an Audiomatica Clio 12 audio analyzer. For isolation measurements, I used a laptop computer running TrueRTA software with an M-Audio MobilePre USB audio interface. For most measurements, the headphones were fed signals from an MPOW BH259A Bluetooth transmitter. For some wired measurements, the headphones were amplified using a Musical Fidelity V-CAN amplifier; I used a Schiit Magnius amplifier for distortion measurements. These are “flat” measurements; no diffuse-field or free-field compensation curve was employed. If you’d like to learn more about what our measurements mean, click here. 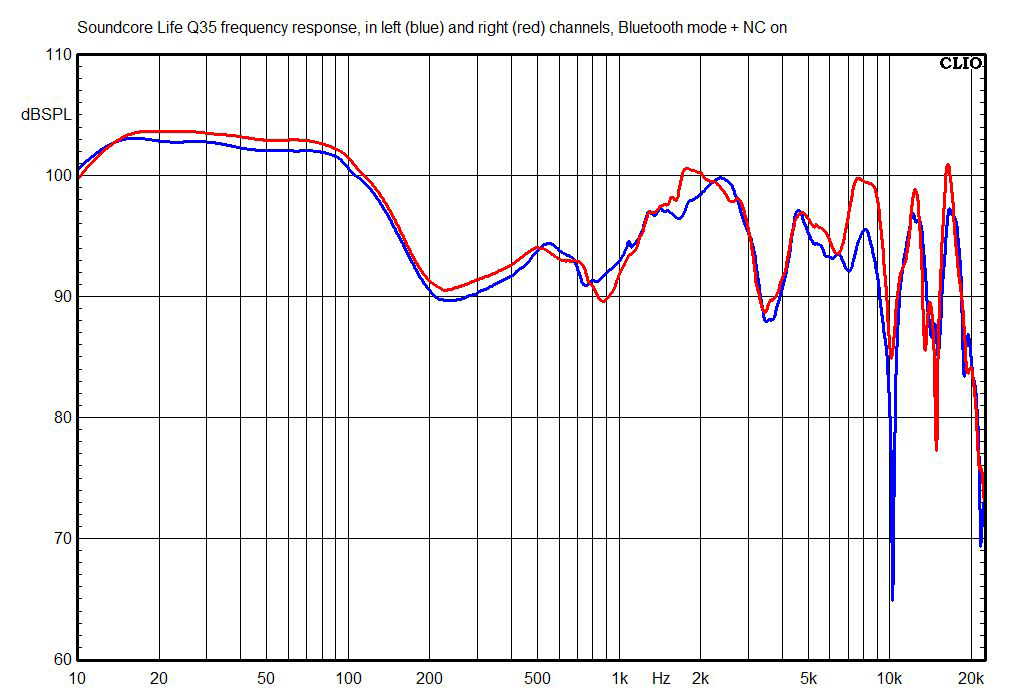 This chart shows the Life Q35s’ frequency response in the Soundcore Signature EQ mode and with the Transport noise-canceling mode on. It’s a somewhat Picasso-esque version of the Harman curve, with the sharp rise to a shelved-up bass response (although much more than Harman curve) and a fairly by-the-book rise at 2kHz, but the deep dip between 3 and 4kHz is peculiar, and there’s a lot more high-frequency energy above 8kHz than I’m used to seeing. I’d guess this would sound fairly balanced, but a little weird. 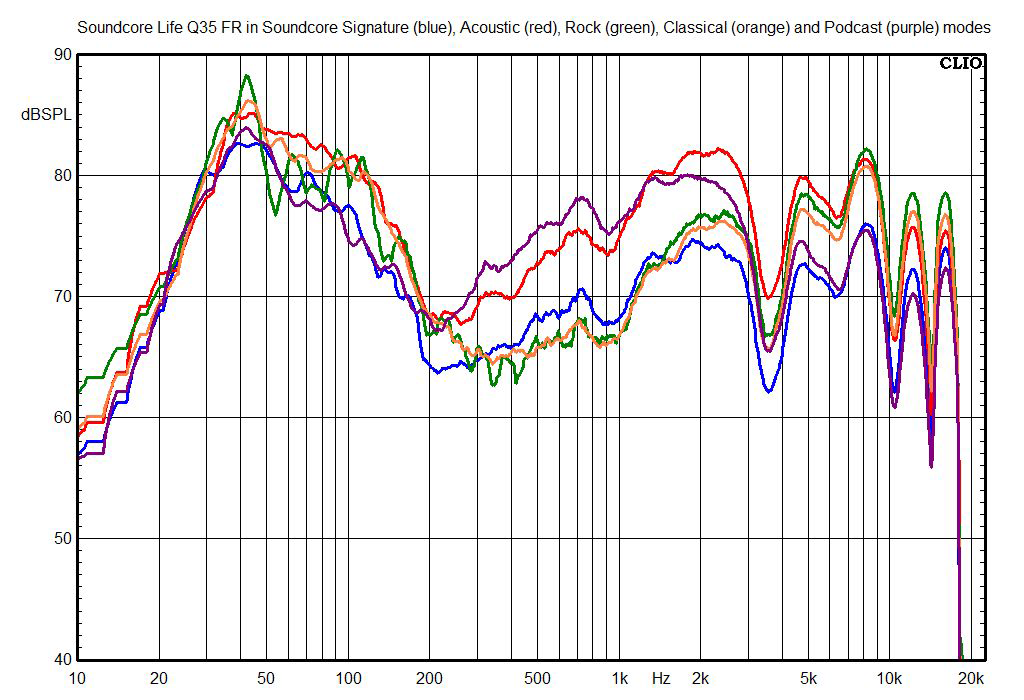 This shows how the sound changes with different EQ modes in the app. (I used pink noise from the AudioTool app, and magnified the Y axis to 5dB per step.) You can see that at least for the modes I selected, the EQ modes mostly select a different amount of output above 200Hz. 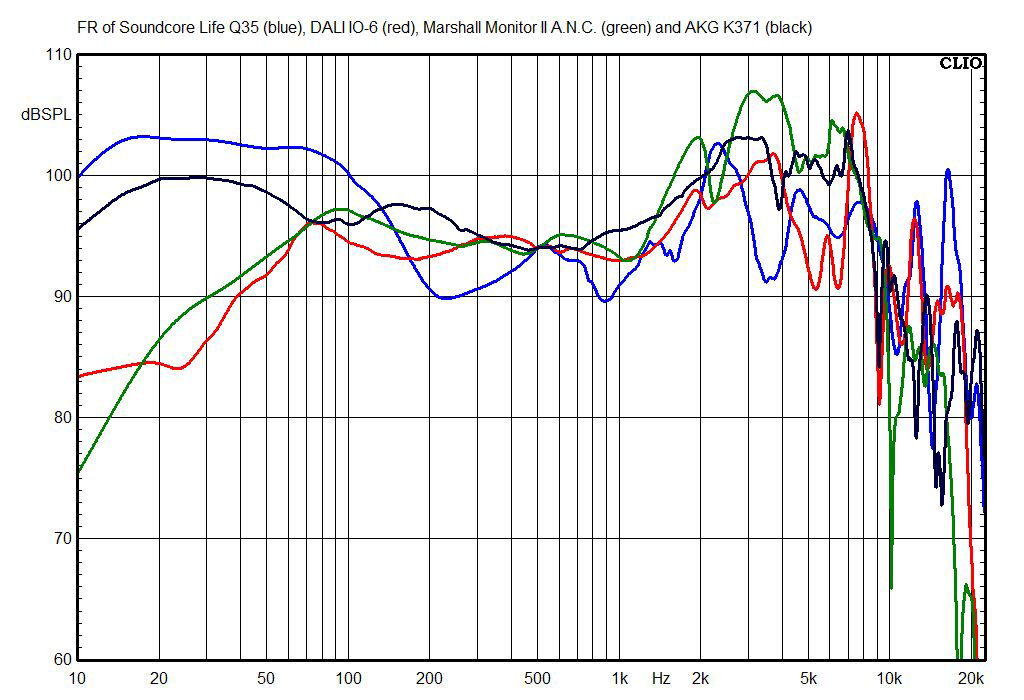 This chart shows the Life Q35s’ right-channel response compared with the DALI IO-6 (with NC on), the Marshall Monitor II A.N.C. (NC on, Rock mode), and the AKG K371 headphones (the latter being closed-back headphones that come very close to the Harman curve response). Again, the Life Q35s’ response is flatter than usual. As with the IO-6es, there’s some bass roll-off, but the relatively low level of the treble output should keep the sound balanced. 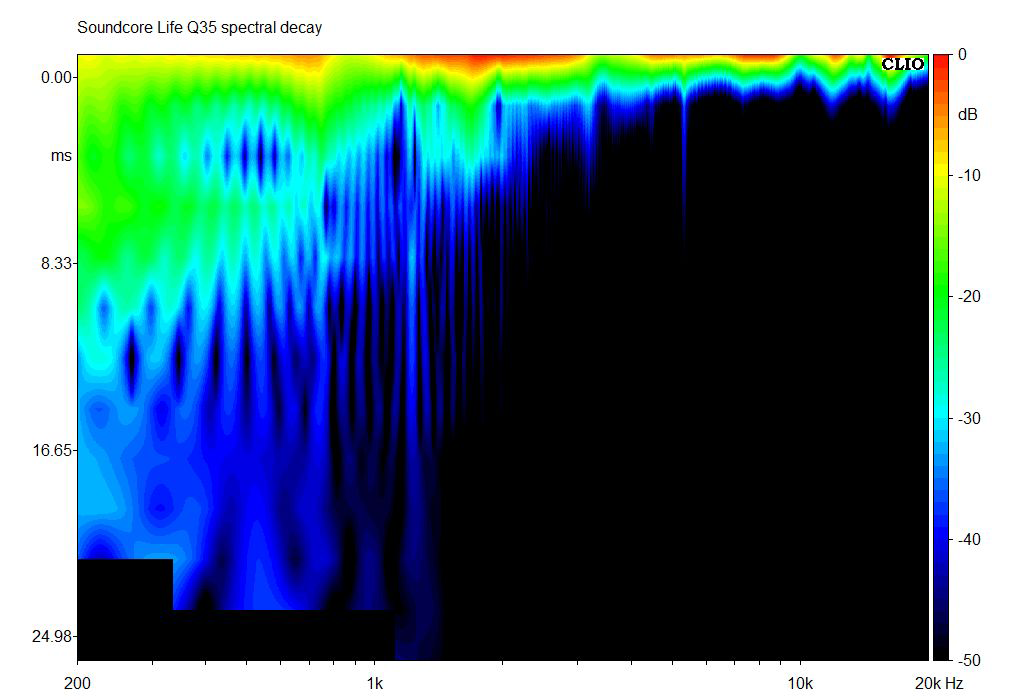 The Life Q35s’ spectral-decay plot (measured in wired mode) shows a little bit of resonance in the lower frequencies—not surprising considering the fairly large amount of bass boost in the frequency-response curve. 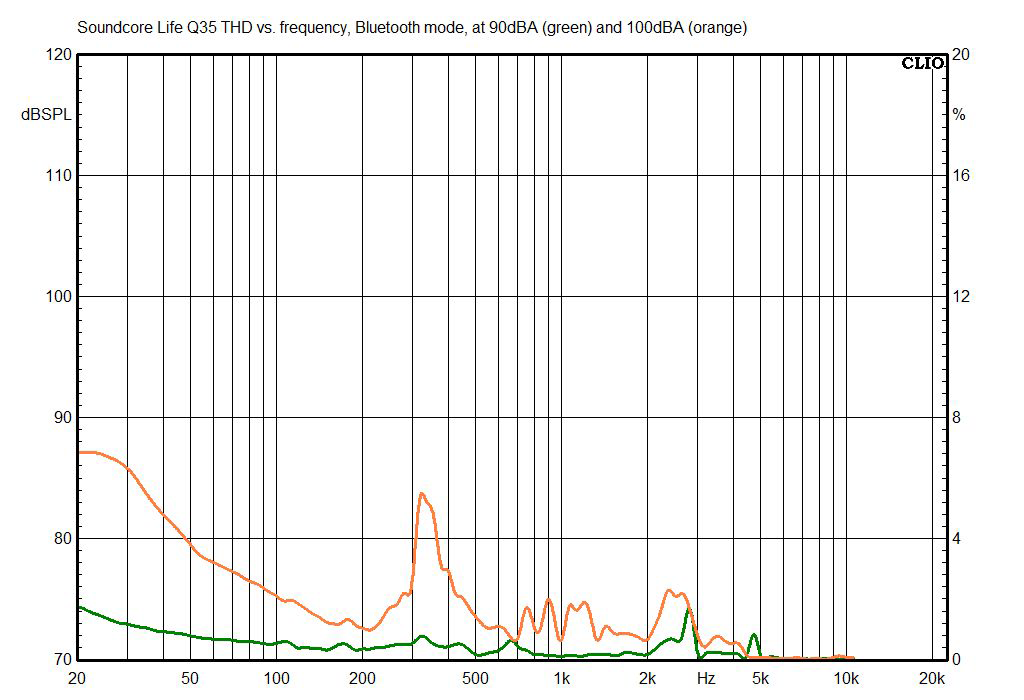 The total harmonic distortion of the Life Q35 headphones (measured here in Bluetooth mode) is negligible at the very loud level of 90dB (level set with pink noise), but at the extremely loud level of 100dBA, it runs a little high in the bass and has a strange spike centered at about 320Hz. Still, it doesn’t get high except down below 40Hz, and there’s not much under-40Hz content in music, so I doubt you’d hear it. 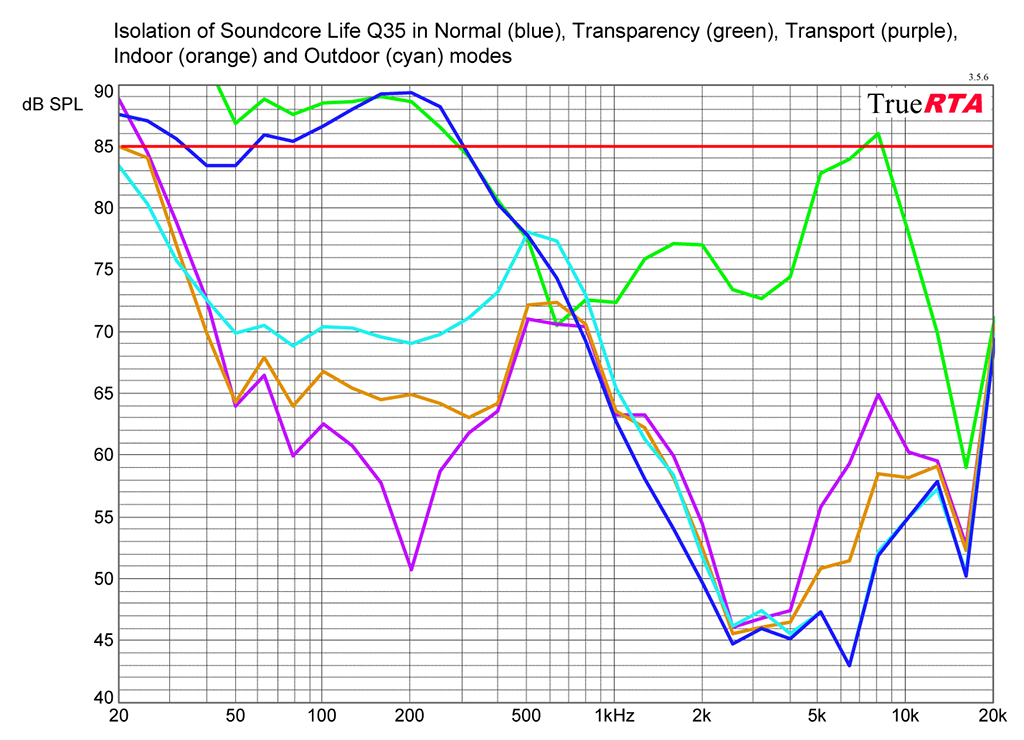 In this chart, you can see how the different noise-canceling modes of the Life Q35s compare. The external noise level is 85dB SPL, and numbers below that indicate the degree of attenuation of outside sounds. The lower the lines, the better the isolation. 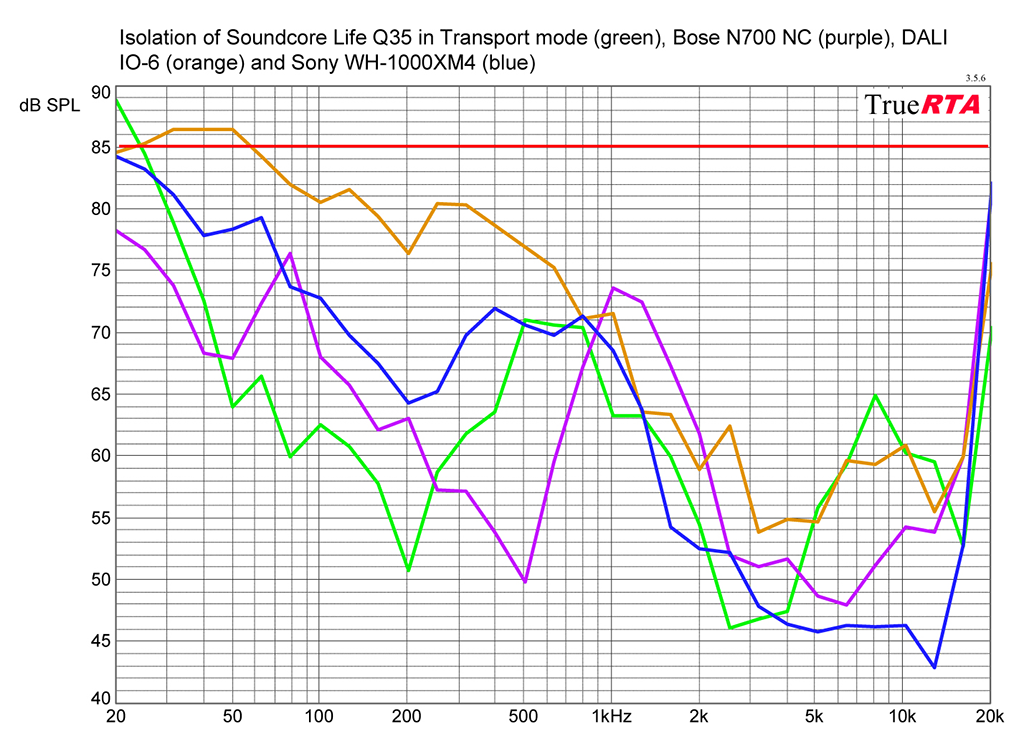 This chart compares the noise canceling of the Life Q35s in the Transport mode against some competitors. It’s world-class, actually better than the more-or-less “reference” noise-canceling headphones, the Bose N700 NCs, between 50 and 200Hz. So they’ll do a great job of eliminating the low-frequency rumble of jet engines. 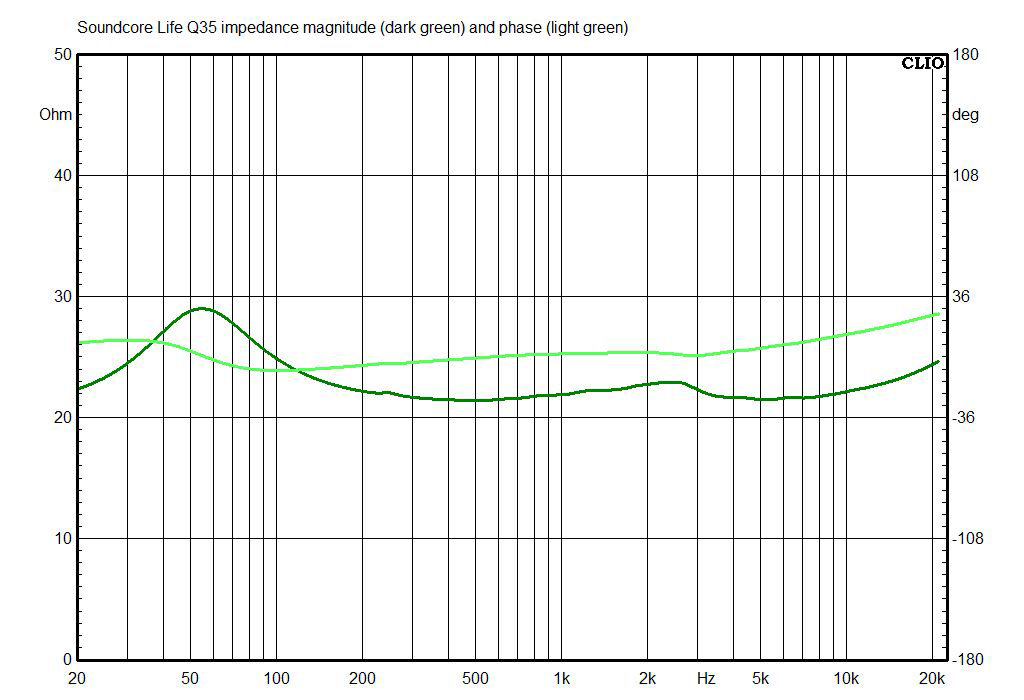 The Life Q35 headphones’ impedance curve is about as expected for a dynamic-driver-based design, running at an average of roughly 23 ohms with a modest amount of phase shift through the audioband. 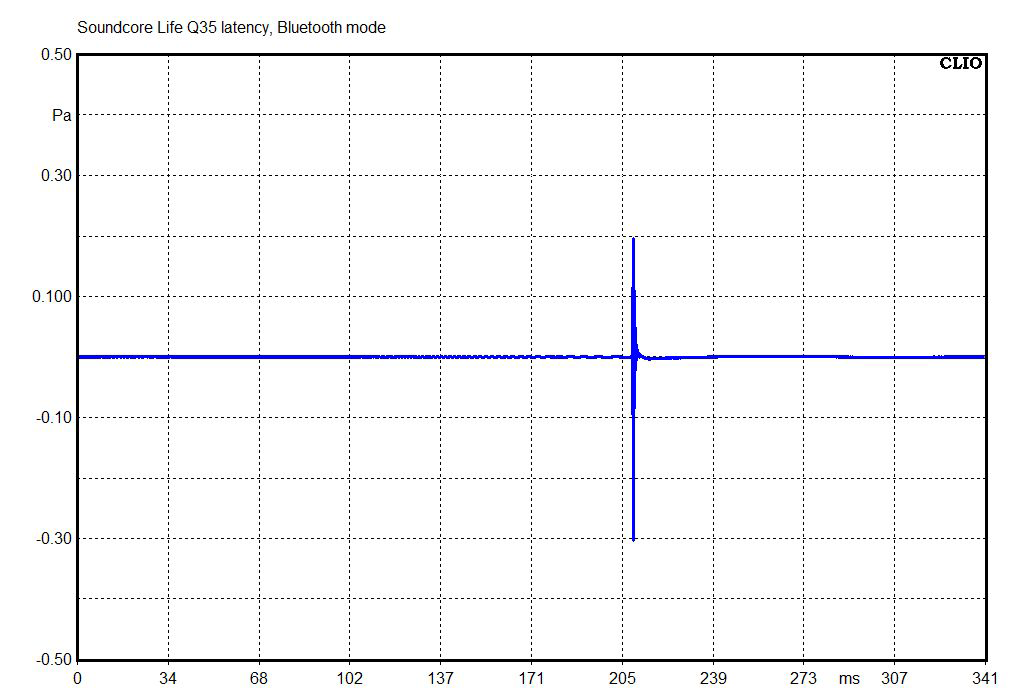 In Bluetooth mode, latency measures 208ms with the MPOW BH259A transmitter. This is a typical result with the SBC codec.

Sensitivity, measured between 300Hz and 3kHz, using a 1mW signal calculated for 16 ohms rated impedance, is 98.3dB with the power off. So the headphones will probably play loud enough for you when plugged into an inflight entertainment system, or if the batteries run down.

Bottom line: The Soundcore Life Q35 headphones’ frequency response is somewhat weird, but the noise canceling is fantastic and none of the other measurements suggest any problems.