Link: reviewed by Doug Schneider on SoundStage! Hi-Fi on April 15, 2021

There is an Audio Gnd switch on the LINEb back panel. Presumably, this switch disconnects audio ground from chassis/earth ground. I found no differences in noise performance with the switch in the off or on position. It was left on for the measurements.

The table below summarizes the measurements published by Karan Acoustics for the LINEb compared directly against our own. The published specifications are sourced from Karan Acoustic’s website, either directly or from the manual available for download, or a combination thereof. With the exception of frequency response, where the Audio Precision bandwidth is set at its maximum (DC to 1MHz), assume, unless otherwise stated, a measurement input bandwidth of 10Hz to 90kHz, and the worst-case measured result between the left and right channels. 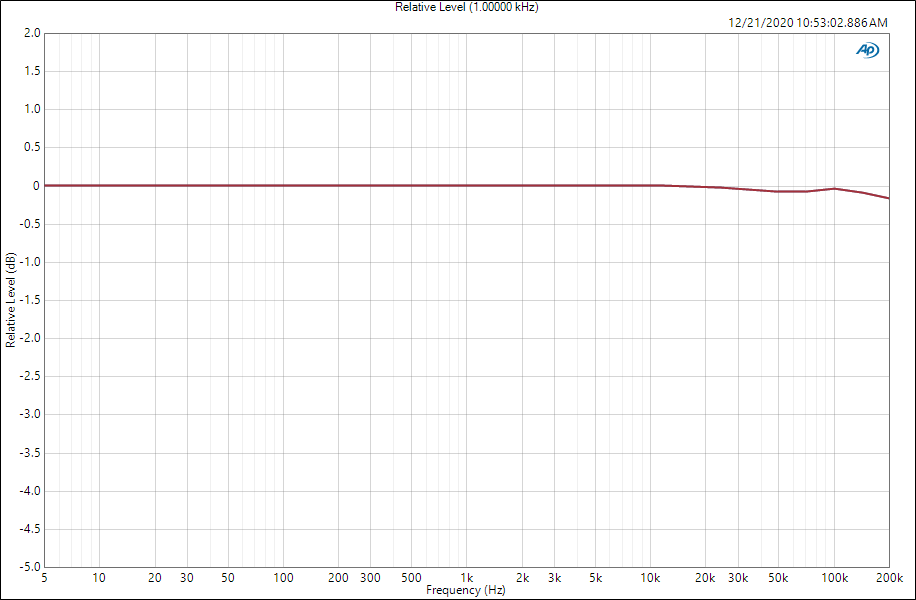 In our measured frequency-response chart above, the LINEb is perfectly flat within the audioband (20Hz to 20kHz) and beyond. These data partially corroborate Karan Acoustics’ claim of 20Hz to 20kHz +/-0dB, 1.5Hz to 3MHz (-3dB). However, since the Audio Precision can only sweep to just past 200kHz, we cannot verify the -3dB at 3MHz claim portion. The LINEb is at 0dB at 5Hz, and at about -0.2dB at 200kHz. To state that the LINEb is a high-bandwidth audio device would be an understatement.

In the graph above and most of the graphs below, only a single trace may be visible. This is because the left channel (blue or purple trace) is performing identically to the right channel (red or green trace), and so they overlap perfectly, indicating that the two channels are ideally matched. 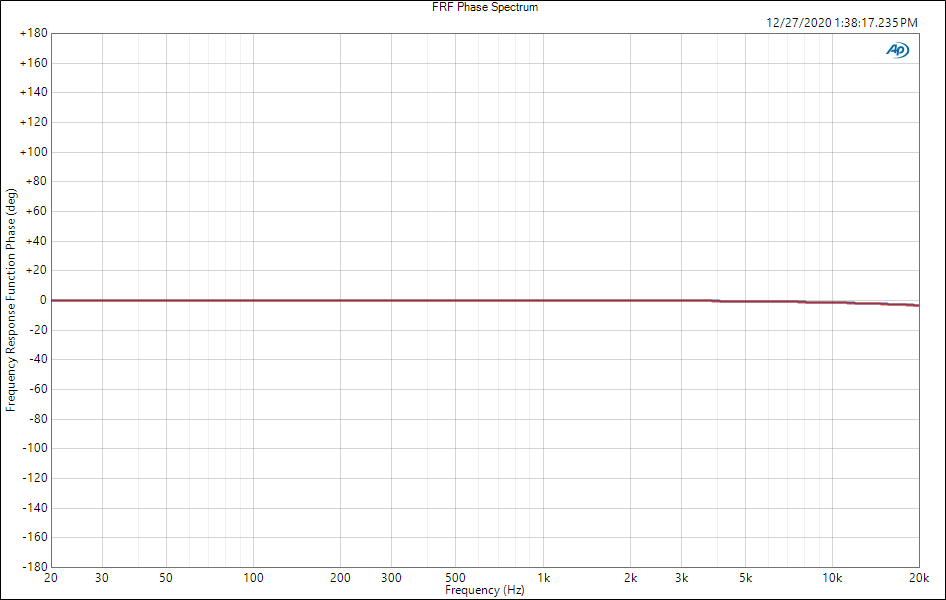 Above is the phase-response chart from 20Hz to 20kHz. The LINEb does not invert polarity, and the plot shows essentially no phase shift within the audioband. 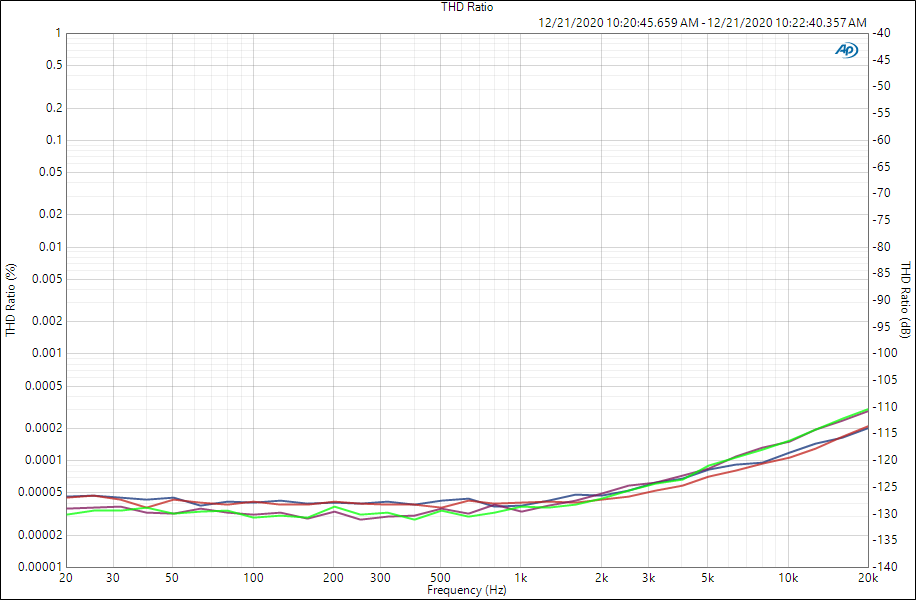 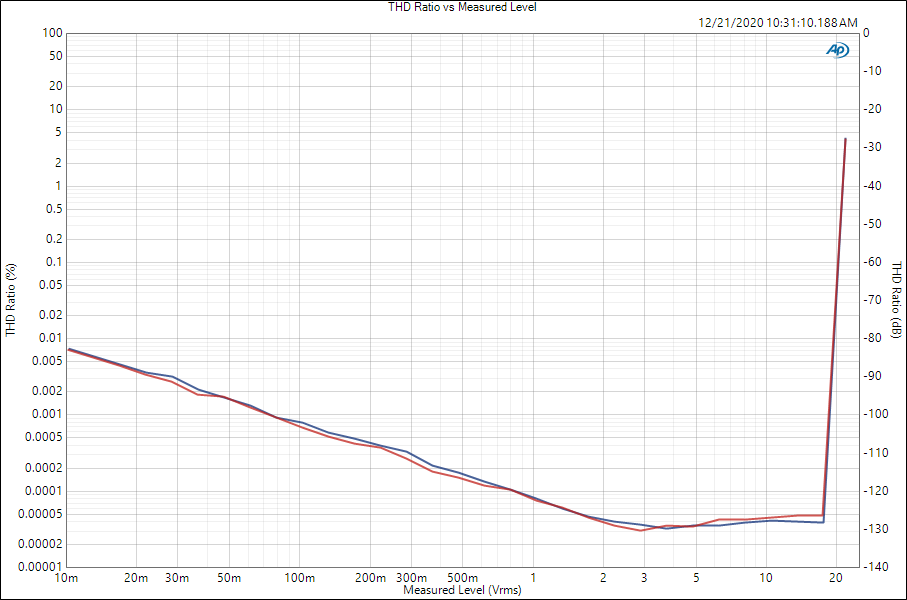 The chart above shows THD ratios measured at the output of the LINEb as a function of output voltage into 200k ohms with a 1kHz input sine wave. At the 10mVrms level, THD values measured around 0.007%, dipping down to around 0.00003% at 3Vrms. The “knee” occurs at around 18Vrms, hitting the 1% THD just past 20Vrms. It’s important to note here that the LINEb’s extraordinarily low THD values are approaching the limits of the Audio Precision analyzer, which, when measured in loopback mode (generator feeding analyzer) measures about 50% lower than the LINEb (at 3Vrms), at about 0.000015%. It’s also important to mention that anything above 2-4Vrms is not typically required to drive most power amps into full power. 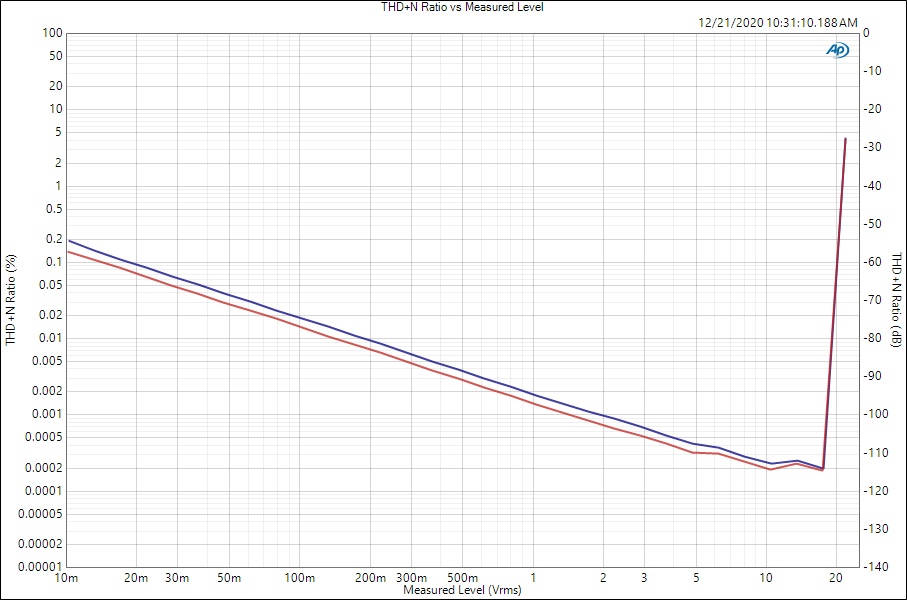 The chart above shows THD+N ratios measured at the output the LINEb as a function of output voltage into 200k ohms with a 1kHz input sine wave. At the 10mVrms level, THD+N values measured around 0.1-0.2%, dipping down to around 0.0002% at 10Vrms. 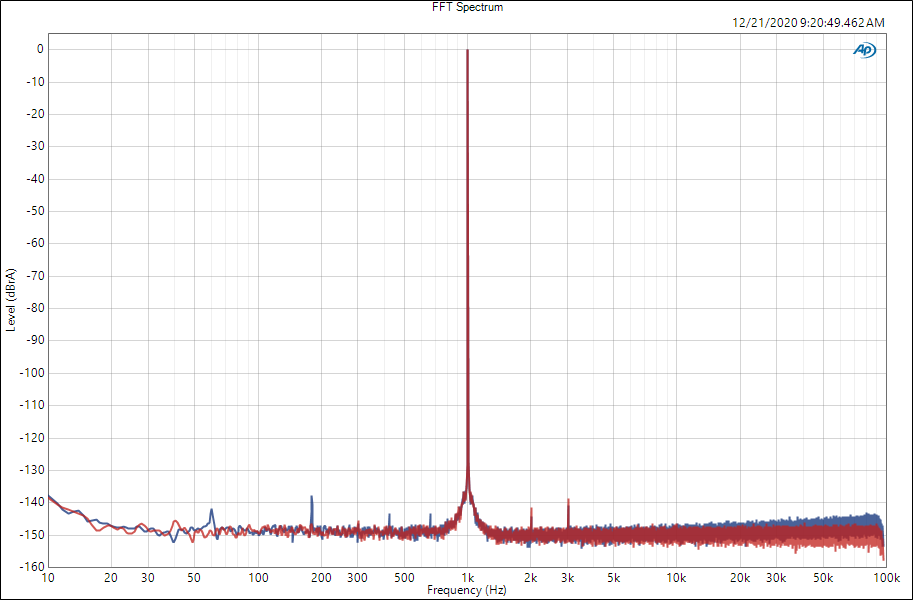 Shown above is the fast Fourier transform (FFT) for a 1kHz input sine-wave stimulus, measured at the output into a 200k-ohm load. The red is the right channel, the blue the left. We see that the signal’s second harmonic, at 2kHz, is at a vanishingly low -140dBrA, or 0.00001%, while the third harmonic, at 3kHz, is just slightly above -140dBrA. Below 1kHz, we see some noise artifacts, with the 60Hz peak due to power supply-noise barely perceptible on the left channel below -140dBrA, and the 180Hz (third harmonic) peak just above -140dBrA. The right channel does not appear to show any noise peaks above the very low -150dBrA noise floor. 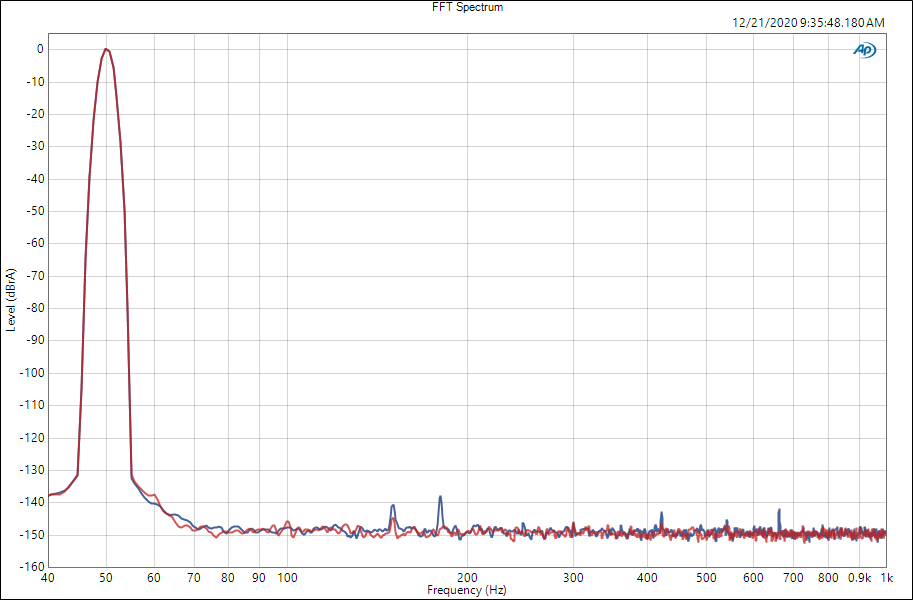 Shown above is the FFT for a 50Hz input sine-wave stimulus measured at the output into a 200k-ohm load. The X axis is zoomed in from 40Hz to 1kHz, so that peaks from noise artifacts can be directly compared against peaks from the harmonics of the signal. Here again, there are barely any noticeable peaks. We find the third harmonic of the signal (150Hz) just peaking above the -150dBrA noise floor, or 0.000003%, and the left channel showing the third-harmonic noise peak (180Hz) just above -140dBrA, or 0.00001%. 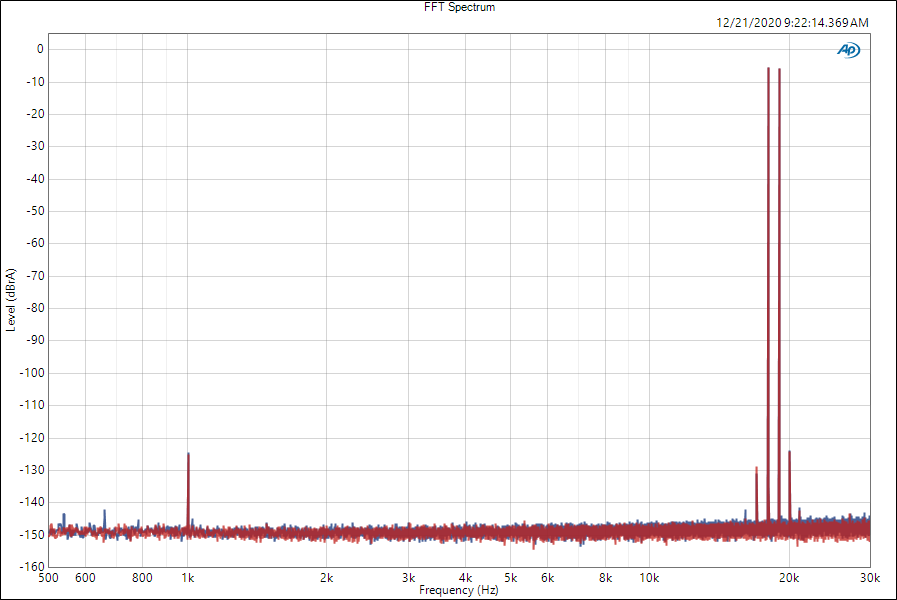 Shown above is an FFT of the intermodulation distortion (IMD) products for an 18kHz + 19kHz summed sine-wave stimulus tone measured at the output into a 200k-ohm load. The input RMS values are set at -6.02dBrA so that, if summed for a mean frequency of 18.5kHz, would yield 2Vrms (0dBrA) at the output. We find that the second-order modulation product (i.e., the difference signal of 1kHz) is at -125dBrA, or 0.00006%, while the third-order modulation products, at 17kHz and 20kHz are at -130dBrA and -125dBrA, or 0.00003% and 0.00006%, respectively. These extraordinarily low harmonic peaks are reflected in the IMD values in our primary table of -113/-115dB, which represent the sum of the second- and third-order intermodulation product peaks. 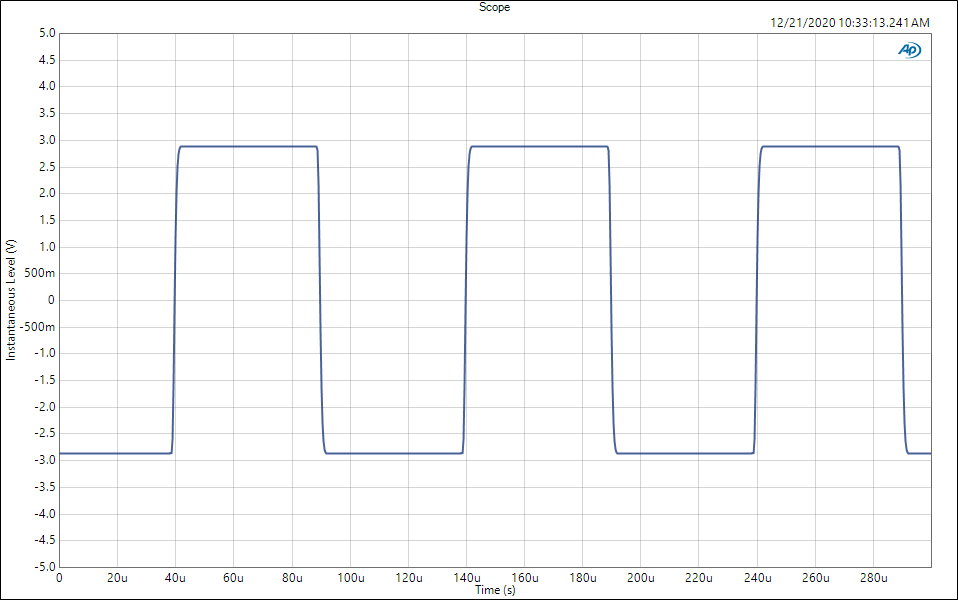 Shown above is the 10kHz square-wave response at the output into 200k ohms. Due to limitations inherent to the Audio Precision APx555 B Series analyzer, this chart should not be used to infer or extrapolate the LINEb’s slew-rate performance. Rather, it should be seen as a qualitative representation of its very high bandwidth. An ideal square wave can be represented as the sum of a sine wave and an infinite series of its odd-order harmonics (e.g., 10kHz + 30kHz + 50kHz + 70kHz . . .). A limited bandwidth will show only the sum of the lower-order harmonics, which may result in noticeable undershoot and/or overshoot, and softening of the edges, in the square-wave representation. As mentioned above, the LINEb is a very high-bandwidth component. Correspondingly, the LINEb’s reproduction of the 10kHz square wave is squeaky clean, with very sharp edges devoid of undershoot or overshoot.