I measured the 64 Audio Nio earphones using laboratory-grade equipment: a GRAS Model 43AG ear/cheek simulator/RA0402 ear simulator with KB5000/KB5001 simulated pinnae, and a Clio 12 audio analyzer. For isolation measurements, I used a laptop computer running TrueRTA software with an M-Audio MobilePre USB audio interface. The headphones were amplified using a Musical Fidelity V-CAN. Except as noted, I made all measurements with the M15 APEX modules installed. These are “flat” measurements; no diffuse-field or free-field compensation curve was employed. If you’d like to learn more about what our measurements mean, click here. 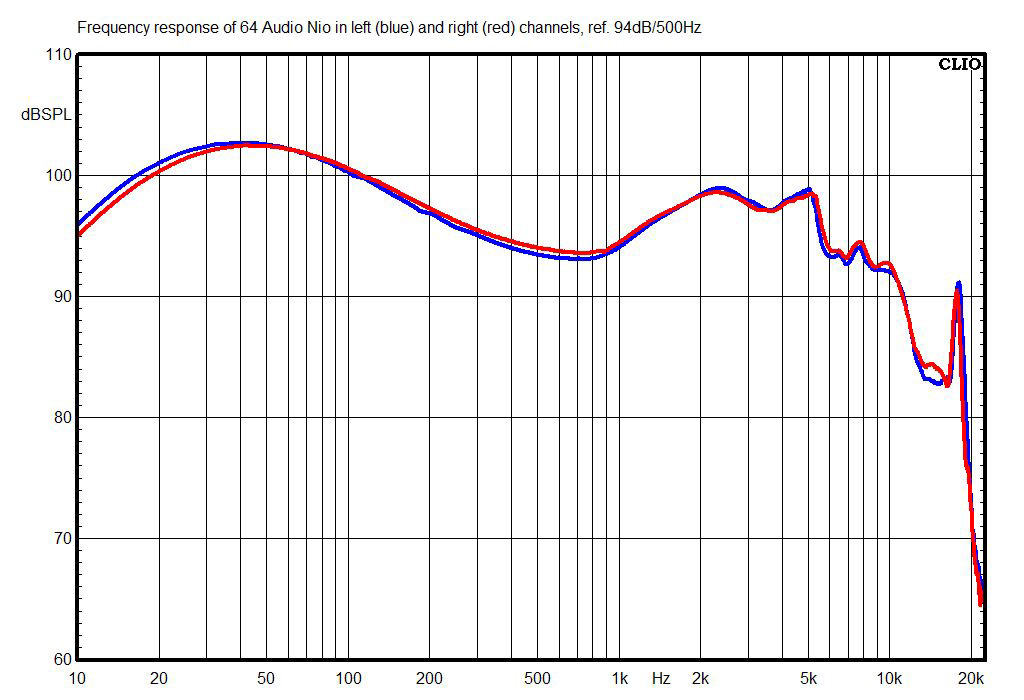 This chart shows the Nios’ frequency response, with the factory-installed M15 APEX modules. This is close to a textbook response, but the bass bump is about 2dB lower and the peaks at 2.4 and 5kHz about 2dB higher. 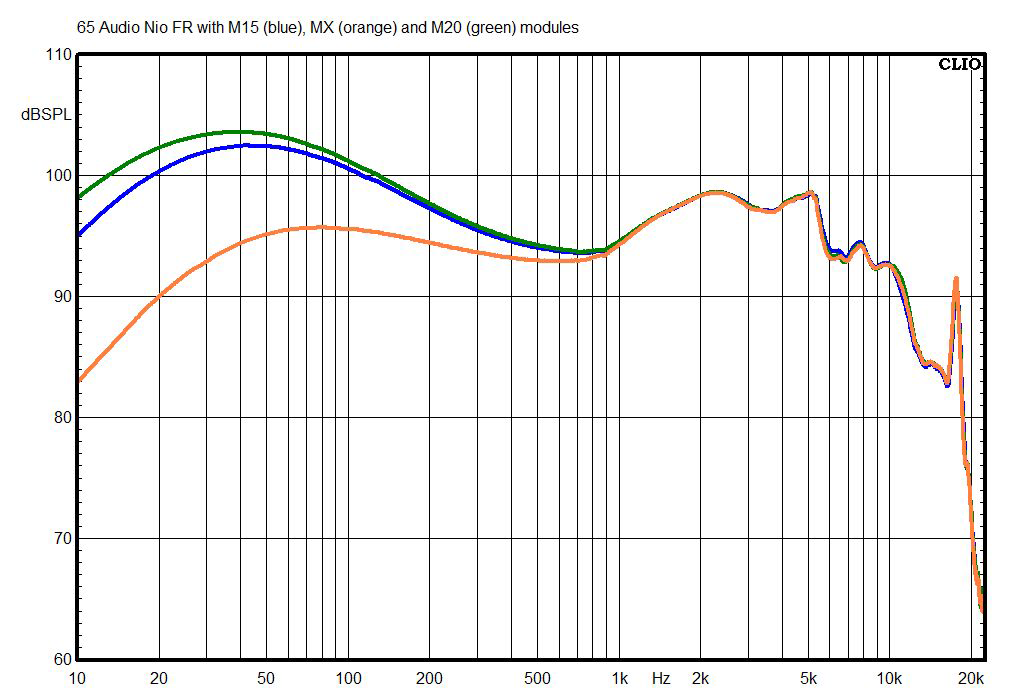 Here we can see the way the APEX modules affect the Nios’ frequency response. The M20 module bumps the bass up about 2dB, while the MX module reduces it by 5dB at 100Hz and 10dB at 20Hz. 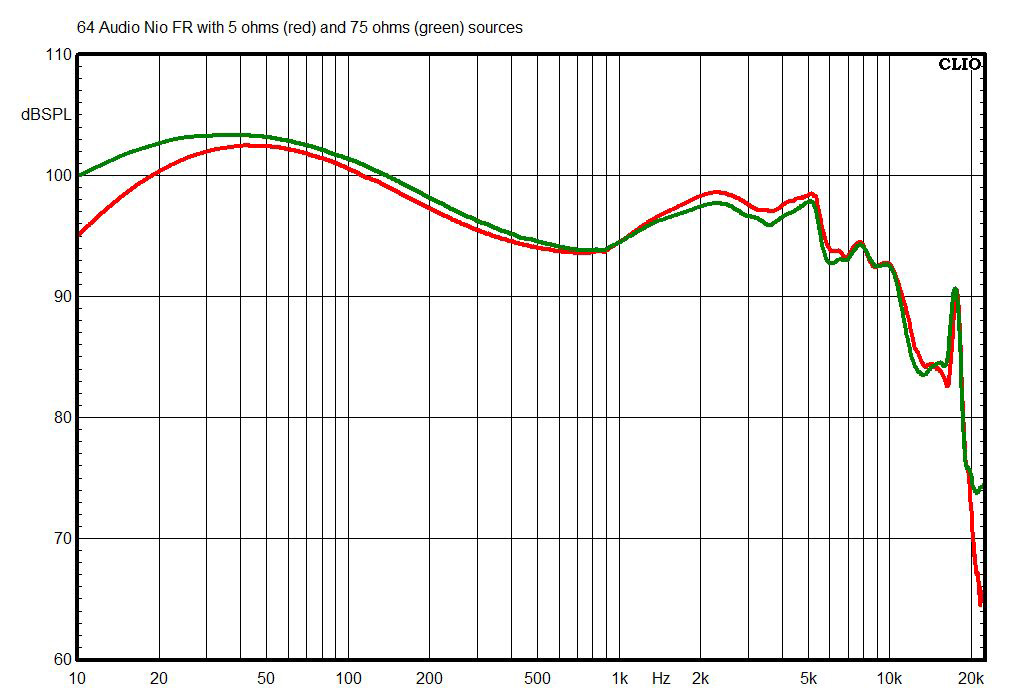 This chart shows how the Nios’ tonal balance changes when they’re used with a high-impedance (75 ohms) source, such as a cheap laptop or some cheap professional headphone amps, or some exotic tube amps. The LID (Linear Impedance Design) is supposed to eliminate this concern. While the change here is less than I often see with balanced-armature earphones, there’s still a difference: with high-impedance sources, about a 1dB boost in the bass and a 1dB reduction in treble output. 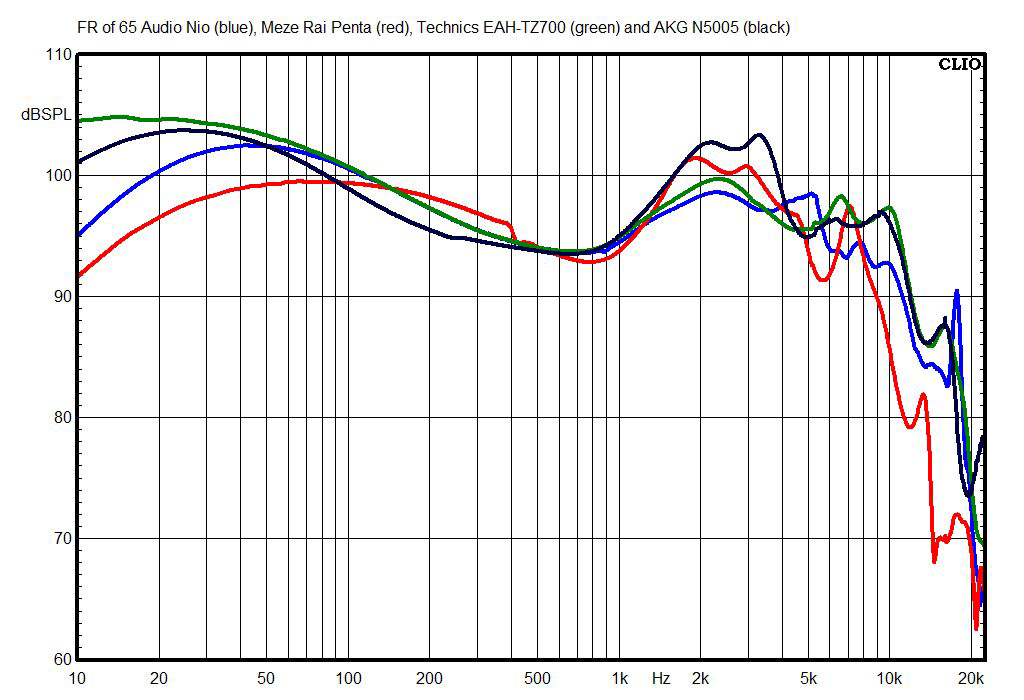 This chart shows the Nios’ right-channel response with the M15 APEX module, compared with three other high-end earphones: the Meze Rai Pentas, the Technics EAH-TZ700s, and the AKG N5005s, which are said to be very close to the Harman curve target. You can easily see that the Nios’ upper-mid/lower-treble peaks are lower in magnitude than similar peaks in the other earphones. 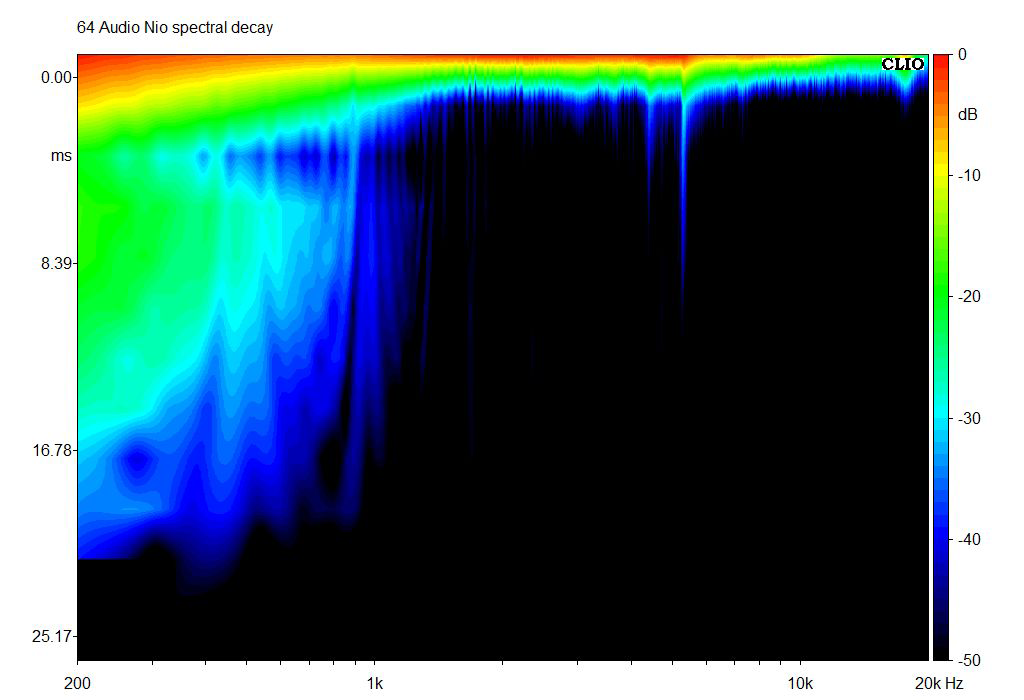 The Nios’ spectral decay shows much stronger resonance in the bass than I normally see in earphones, perhaps due to its internal acoustics, which are said to include resonant chambers for the different drivers. 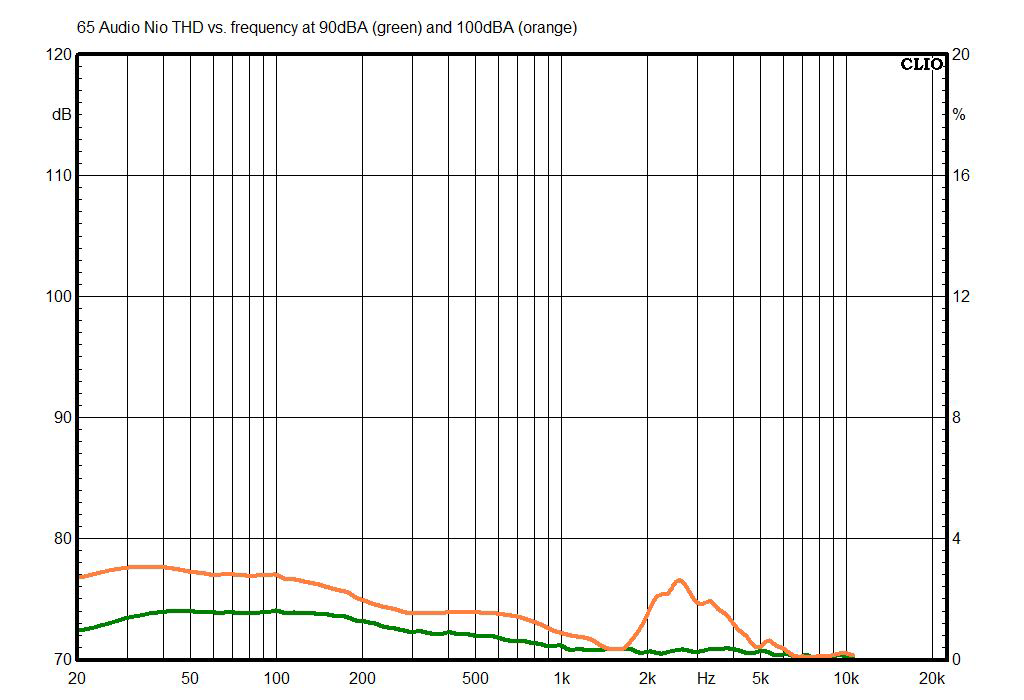 The Nios show a little bit of distortion at high listening levels, but at most it’s about 3%, which isn’t a lot for transducers. If you have them cranked really loud, you might encounter that distortion peak at 2.6kHz (with readily audible harmonics at 5.2, 7.8 and 10.4kHz), depending on what you’re listening to. 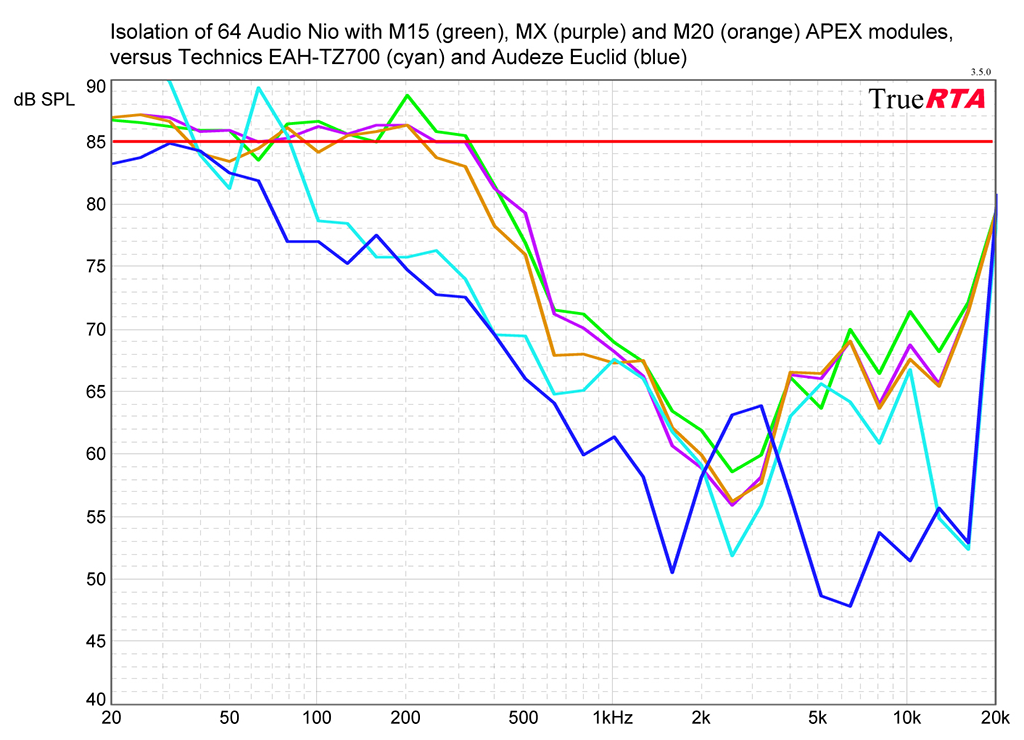 In this chart, the external noise level is 85dB SPL, and numbers below that indicate the degree of attenuation of outside sounds. The lower the lines, the better the isolation. I compared the Nios with the three different APEX modules installed (using the medium silicone tips, which fit the ear/cheek simulator best), versus two other high-end earphones: the Technics EAH-TZ700s and Audeze Euclids. There doesn’t seem to be much difference in the isolation with the different APEX modules. 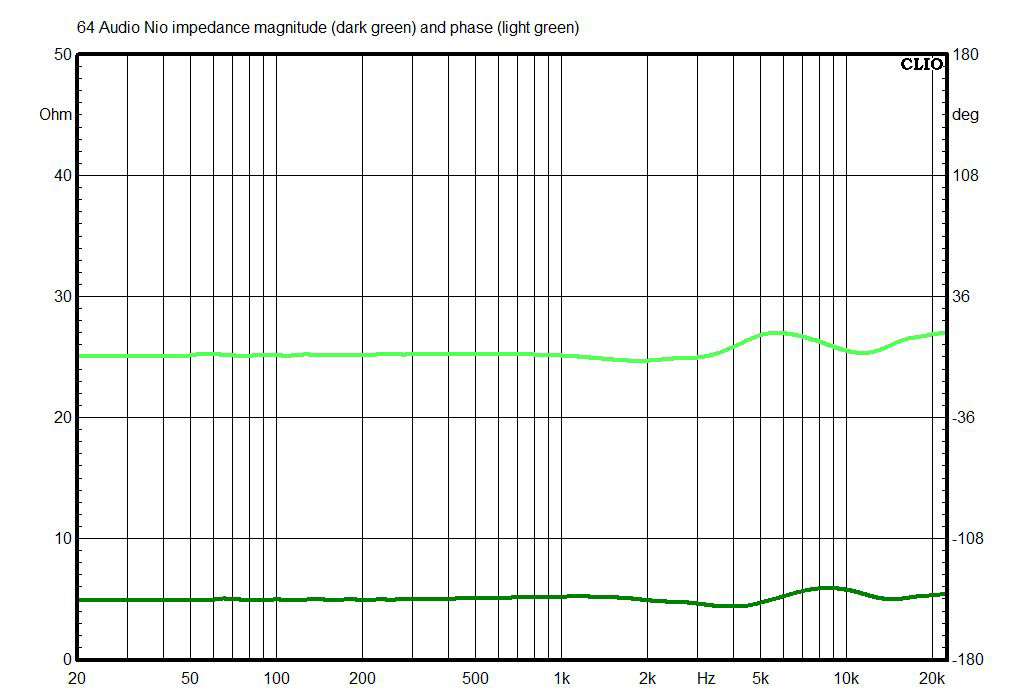 True to the claims for LID, the Nios show one of the flattest (maybe the flattest) impedance-magnitude curves I’ve seen in balanced-armature earphones, averaging about 5 ohms with only a mild wrinkle in the treble (which is reflected in the phase measurement), and the likely cause of the changes in treble response with high-impedance sources.

Sensitivity of the Nios, measured between 300Hz and 3kHz, using a 1mW signal calculated for 6 ohms rated impedance, is just 95.1dB, much lower than the rated 105dB. However, this doesn’t square with my experience; based on what I’ve heard with other earphones using my Samsung S10 phone as a source, I think the Nios’ sensitivity would be somewhere around its rating. I derive the drive voltage for this test according to IEC 60268-7, which mandates a voltage that produces 1mW into the rated impedance, which in this case is just 77mV, versus 179mV for 32-ohm earphones. This method has worked fine for me in the past, and obviously has gotten the job done for countless others for more than three decades, but it doesn’t seem to work with a super-low-impedance model like the Nios.

Bottom line: My measurements suggest the Nios will sound a little on the soft side from a tonal balance standpoint. Otherwise, the design looks pretty solid, and the Nios are mostly free of the source-matching concerns that balanced-armature earphones usually present, although the measurements do nothing to convince me of the efficacy of (or need for) the APEX modules.