The NAD Masters M28 offers seven channels of amplification, each with an unbalanced (RCA) and balanced (XLR) input connector. However, since our measurement setup is optimized for stereo amplifiers, we were only able to test two channels at a time; therefore, we were not able to test the M28 with all seven channels being driven simultaneously.

The M28 was conditioned for one hour at 1/8th power (27W, 8 ohms) before any measurements were taken. All measurements were performed with two channels driven, unless otherwise stated, with the M28 connected to a dedicated 120V/20A circuit.

Unless otherwise specified, balanced input connections were used for all measurements, using channels 2 (as the right channel) and 3 (as the left channel). No important differences were seen between unbalanced and balanced input connections in terms of THD+N. There were small signal-to-noise ratio (SNR) differences highlighted in the table below. We found no differences in maximum output power (1% THD+N) between all seven channels when measured separately; however, significant differences in THD were observed between about 210W and 240W output (8 ohms)—channels 1-3 outperformed channels 5-7 in terms of THD by 20-30dB. Below 200W, and at the 1% THD power level (about 268W, 8 ohms), all channels performed similarly.

The table below summarizes the measurements published by NAD for the M28 compared directly against our own. The published specifications are sourced from NAD’s website, either directly or from the manual available for download, or a combination thereof. With the exception of frequency response, where the Audio Precision bandwidth was set at its maximum (DC to 1MHz), assume, unless otherwise stated, a measurement input bandwidth of 10Hz to 90kHz, and the worst-case measured result between one of the two channels driven.

*The NAD THD specification on their website is published as “20Hz-20kHz”; however, after discussions with NAD, it was discovered that the company measures THD from 20Hz to 6.5kHz, with a 20Hz to 20kHz input bandwidth filter.

**The discrepancy in balanced input impedance may be due to NAD specifying this value for the inverting and noninverting pins separately. Our measurement considers both inputs on the balanced connector together. Treated separately, our measurement would be halved, or 39.2k ohms.

For the continuous dynamic power test, the M28 was able to sustain 500W (1dB over rated output and roughly 1%THD) into 4 ohms using an 80Hz tone for 500ms, alternating with a signal at -10dB of the peak (50W) for five seconds for five continuous minutes without inducing a fault or the initiation of a protective circuit. This test is meant to simulate sporadic dynamic bass peaks in music and movies. During the test, the top of the M28 was just slightly warm to the touch 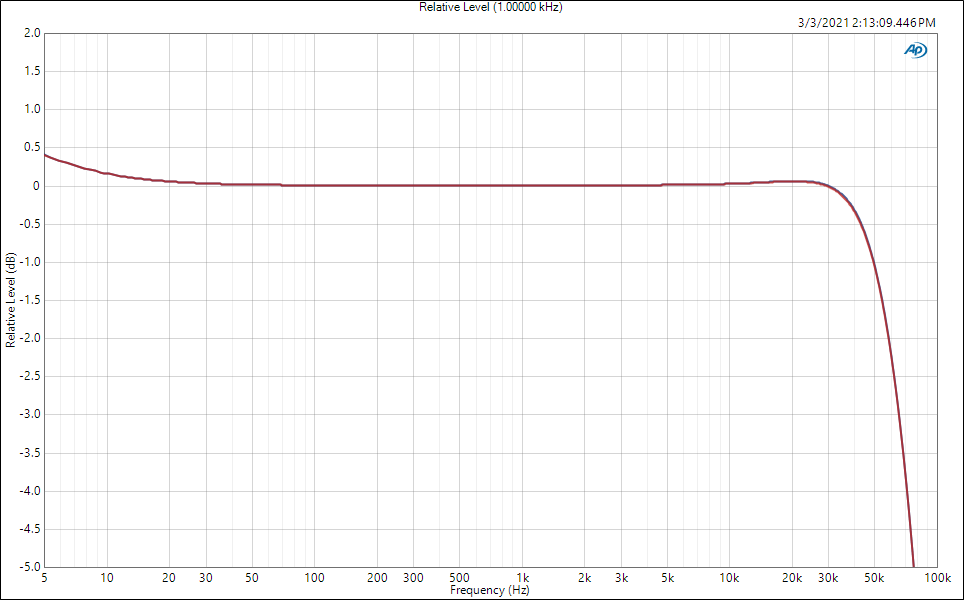 In our measured frequency response plot above, the M28 is essentially perfectly flat within the audio band (20Hz to 20kHz), with the exception of an insignificant 0.05dB rise at 20Hz and 20kHz. NAD’s claim of ±0.1dB from 20Hz to 20kHz is corroborated by our measurement, as is the -3dB point at 60kHz (we measured -2.3dB). The M28 cannot be considered a high-bandwidth audio device , due to the steep rolloff that begins at around 30kHz. In the graph above and most of the graphs below, only a single trace may be visible. This is because channel 3 (blue or purple trace) is performing identically to channel 2 (red or green trace), and so they perfectly overlap, indicating that the two channels are ideally matched.

RMS level vs. frequency vs. load impedance (1W, channel 3 only) 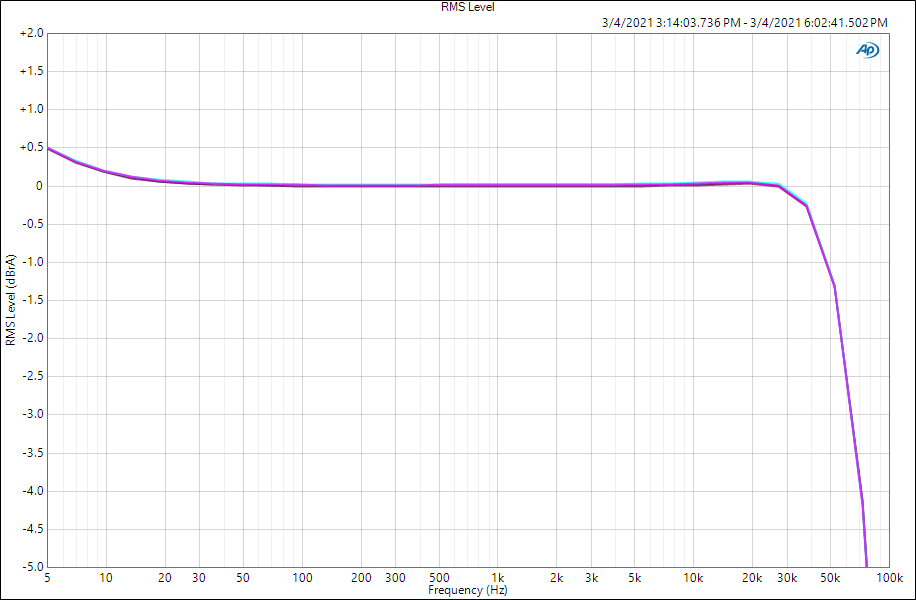 The charts above and below show RMS level (relative to 0dBrA, which is 1W into 8 ohms or 2.83Vrms) as a function of frequency, for the balanced line-level inputs swept from 5Hz to 100kHz. The blue plot is into an 8-ohm load, the purple is into a 4-ohm load, the pink is an actual speaker (Focal Chora 806, measurements can found here), and the cyan is no load connected. The top graph shows that all four plots are indistinguishable from one another. This is an indication of a high damping factor, or low output impedance. The graph below. . . 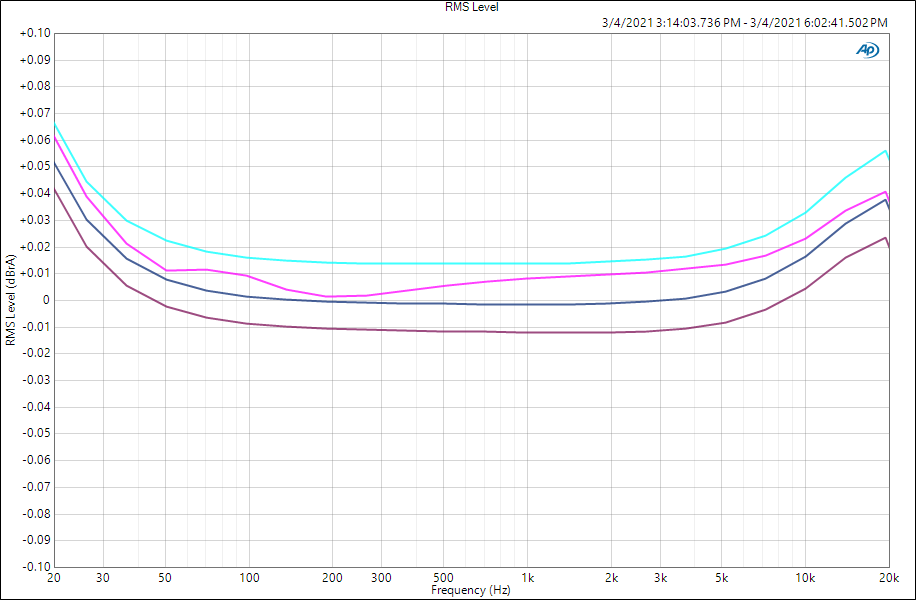 . . . shows the same data, but with the vertical and horizontal axis expanded to show differences more clearly. Here we find that there’s a total deviation of only about 0.03dB in the flat portion of the curve between 4 ohms and no load. At 20kHz, the spread is a little larger, perhaps 0.04dB. The maximum variation in RMS level when a real speaker was used as a load is extremely small, deviating by about 0.01dB within the flat portion of the curve. There is a rise at low and high frequencies; however, this is due to the M28’s inherent frequency response, and not the output impedance of the M28 interacting with a load that varies with frequency. 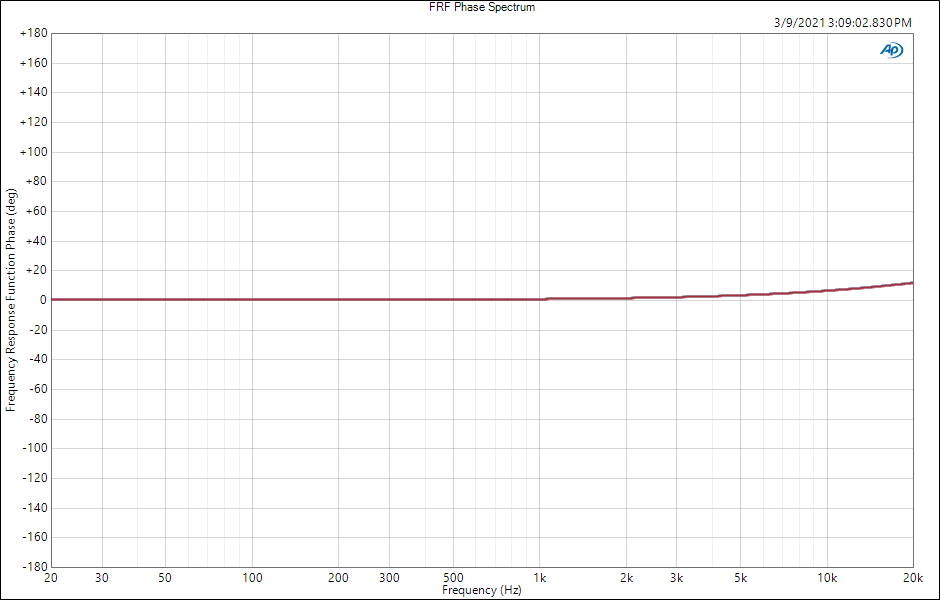 Above is the phase response plot for the M28 from 20Hz to 20kHz. The M28 does not invert polarity, and there is virtually no phase shift throughout the audioband, with a worst case of just over +10 degrees at 20Hz. 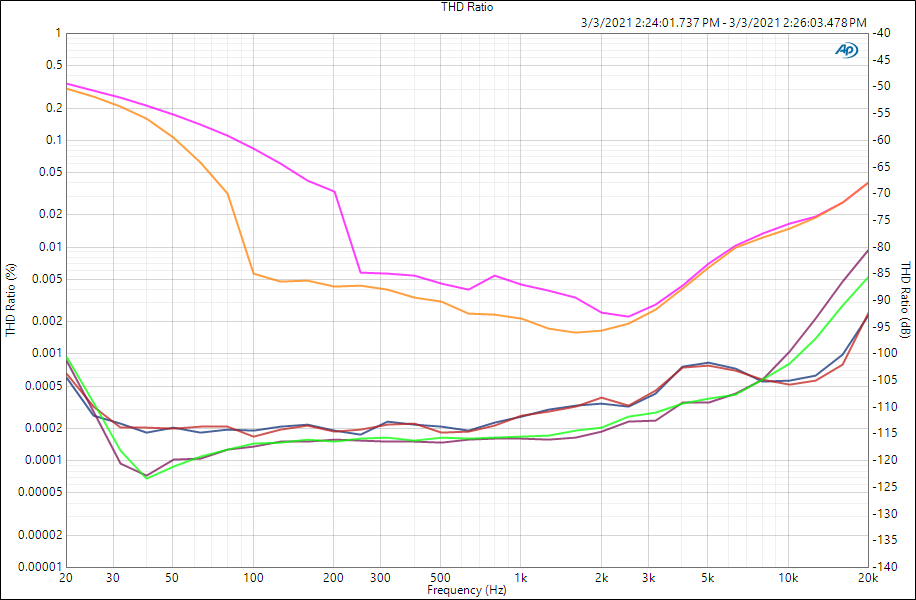 The chart above shows THD ratios at the M28’s output into 8 ohms as a function of frequency (20Hz to 20kHz) for a sine-wave stimulus at the balanced line-level inputs. The blue and red plots are for channels 3 and 2 at 1W output, purple/green at 10W, and pink/orange at the rated 220W, all into 8 ohms. There is about a 5dB improvement in THD ratios at 10W versus 1W throughout most of the audioband. At 10W, the THD values are as low as 0.00007% at 40Hz, and as high as 0.01% at 20kHz. Due to these extremely low values, it’s important to note that we are approaching the limits of the APx555 analyzer, which inherently measures at approximately 0.00001-0.00002% THD when fed its own signal at this level. The THD levels at 220W are significantly higher than at 1W and 10W, ranging from 0.3% at 20Hz down to about 0.002% around 2-3kHz, then back up to 0.04% at 20kHz. These differences are more of an indicator that NAD may not have been conservative in specifying output power for the M28, and that 200W into 8 ohms, or just below, would have been a more appropriate value for the M28 (also see chart detailing THD vs. output power below). 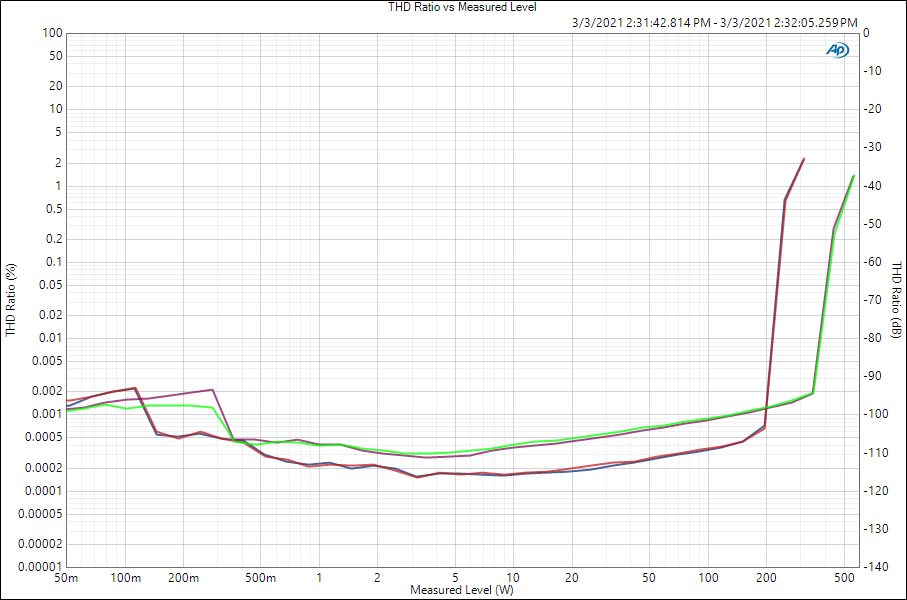 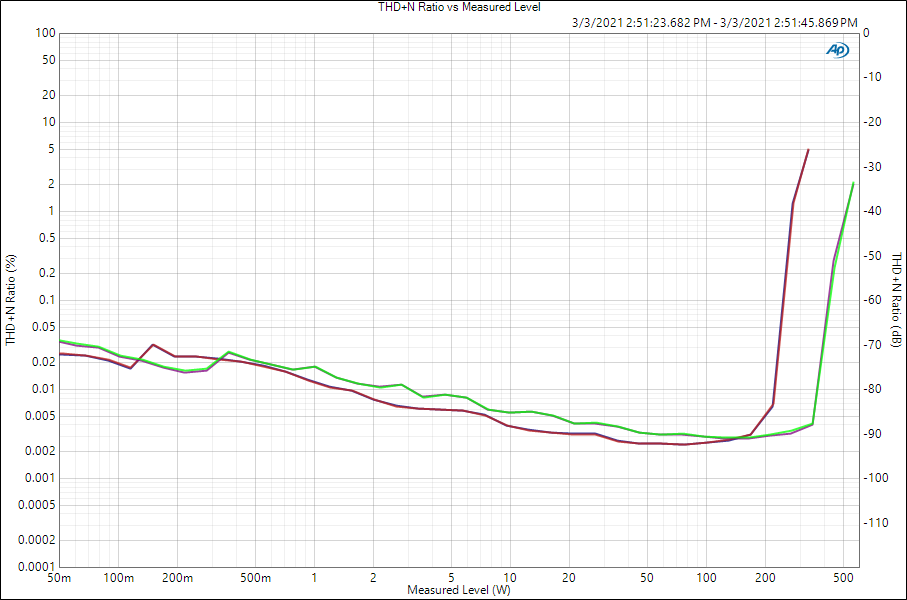 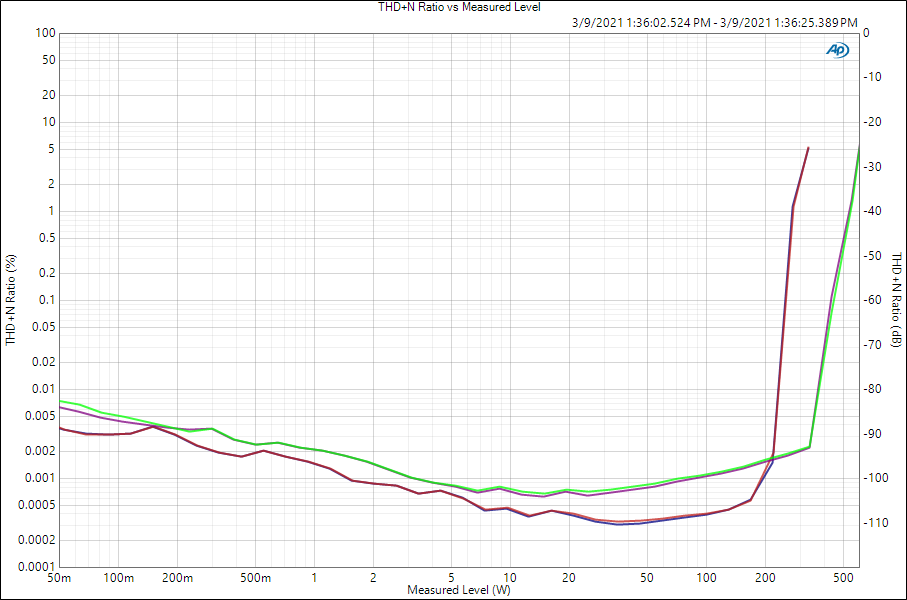 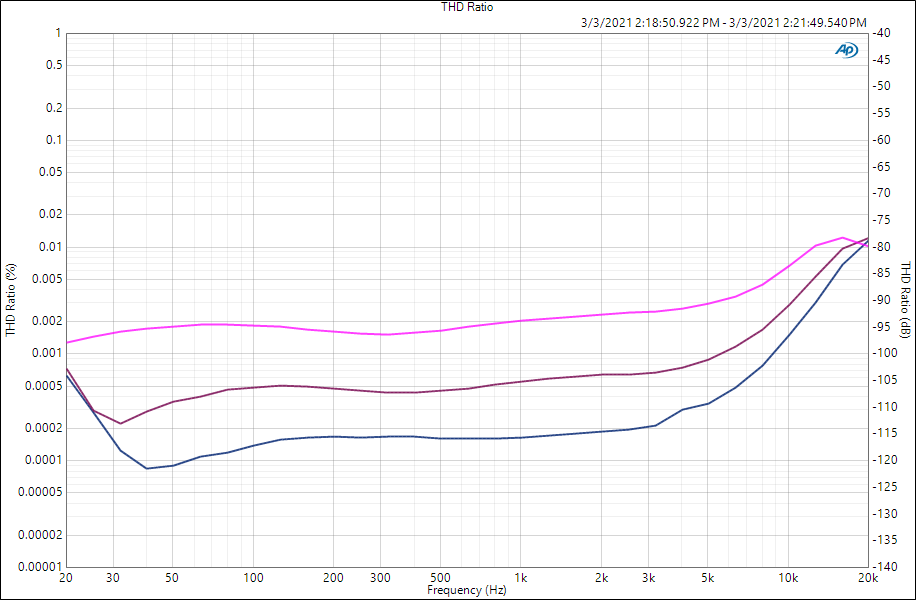 The chart above shows THD ratios measured at the output of the M28 as a function of load (8/4/2 ohms) for a constant input voltage that yields 20W at the output into 8 ohms (and roughly 40W into 4 ohms, and 80W into 2 ohms) for the channel 3 balanced input. The 8-ohm load is the blue trace, the 4-ohm load the purple trace, and the 2-ohm load the pink trace. We find increasing levels of THD from 8 to 4 to 2 ohms, with about a 10db difference between 8, 4, and 2 ohms respectively, from 50Hz to 3kHz. There’s a convergence of THD values between all loads at higher frequencies. Overall, even with a 2-ohm load at roughly 80W, THD values ranged from 0.001% at 20Hz to just above 0.01% at 20kHz. 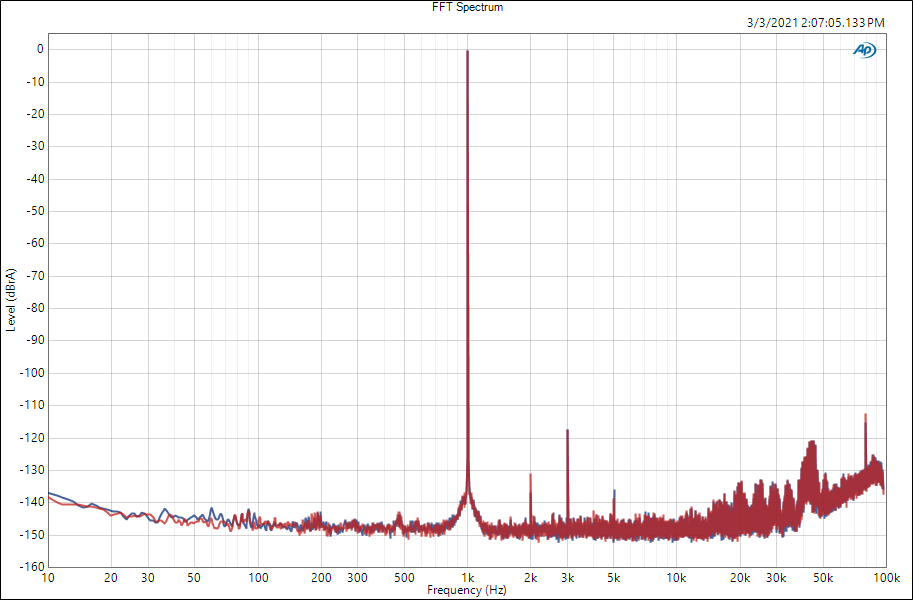 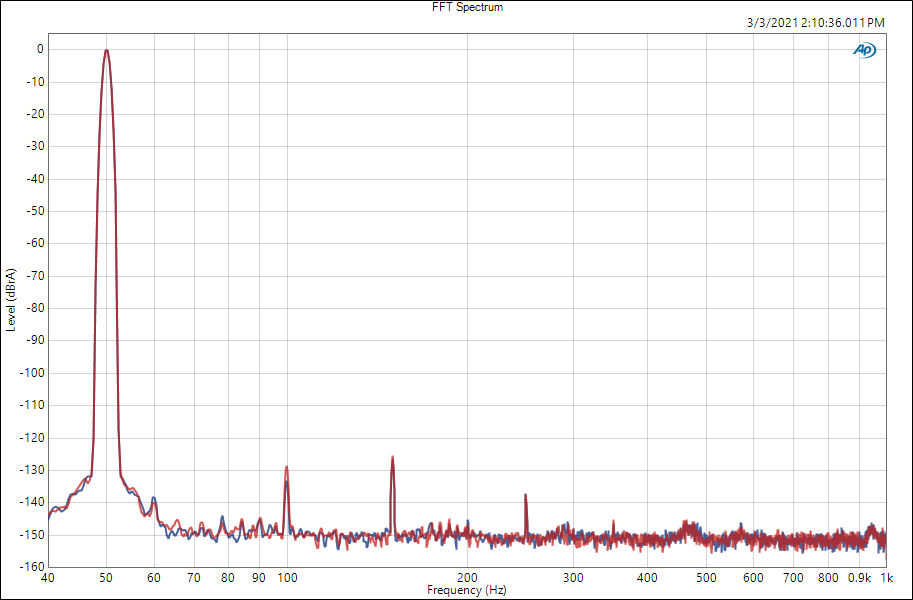 Shown above is the FFT for a 50Hz input sine-wave stimulus measured at the output across an 8-ohm load at 10W. The X axis is zoomed in from 40Hz to 1kHz, so that peaks from noise artifacts can be directly compared against peaks from the harmonics of the signal. The second harmonic of the 50Hz signal (100Hz) can be seen at around -130dBrA, or 0.00003%. The third harmonic at 150Hz is at -125 dBrA, or 0.00006%. Here again, no noise artifacts due to power-supply noise can be seen. 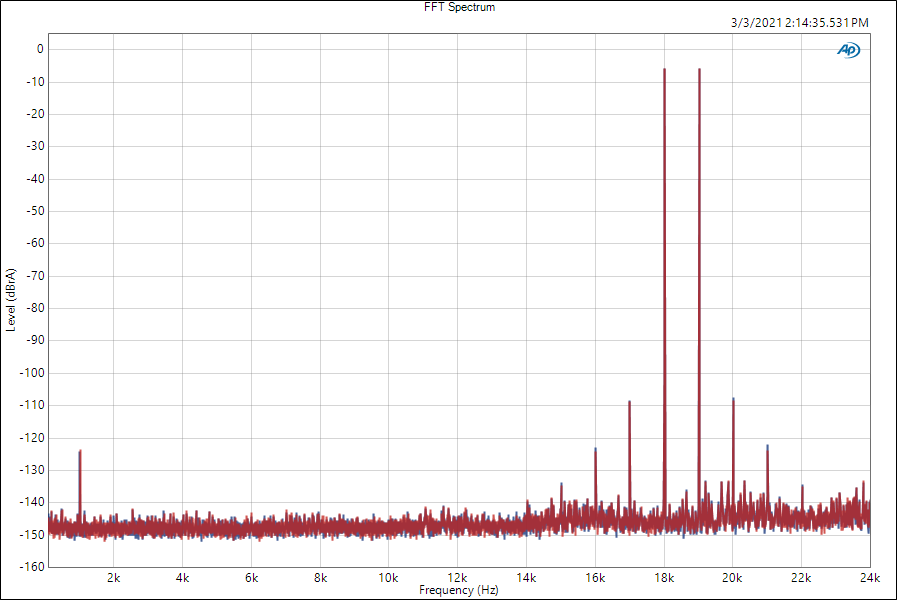 Shown above is the FFT of the intermodulation distortion (IMD) products for an 18kHz + 19kHz summed sine-wave stimulus tone at the balanced input. The input RMS values are set at -6.02dBrA so that, if summed for a mean frequency of 18.5kHz, would yield 10W (0dBrA) into 8 ohms at the output. We find that the second-order modulation product (i.e., the difference signal of 1kHz) is at about -125dBrA, or 0.00006%, while the third-order modulation products, at 17kHz and 20kHz are just above -110dBrA, or 0.0003%. 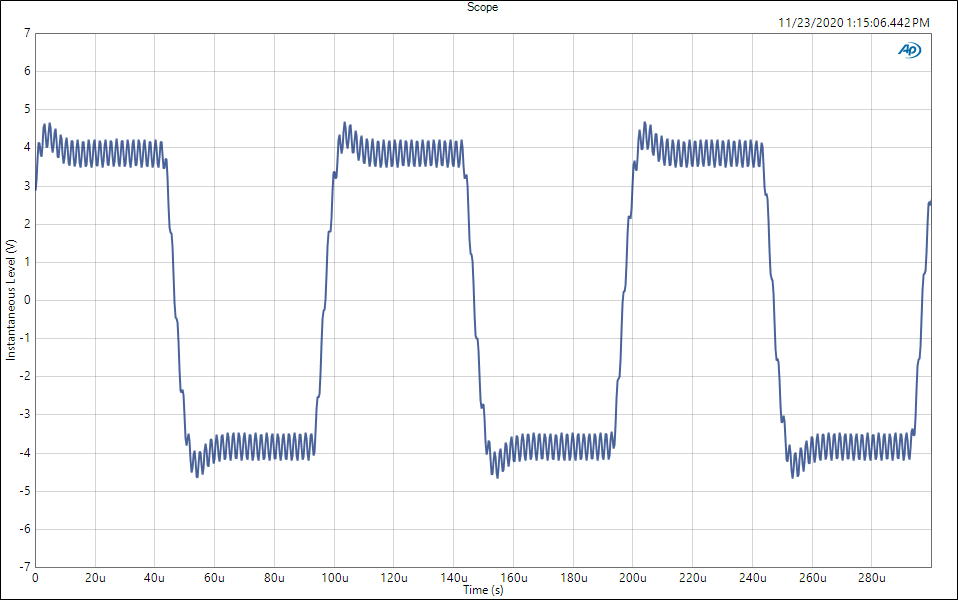 Above and below are the 10kHz square-wave responses of the M28 into an 8-ohm load. The top chart is using the Audio Precision’s highest input bandwidth setting of 1MHz, while the chart below . . . 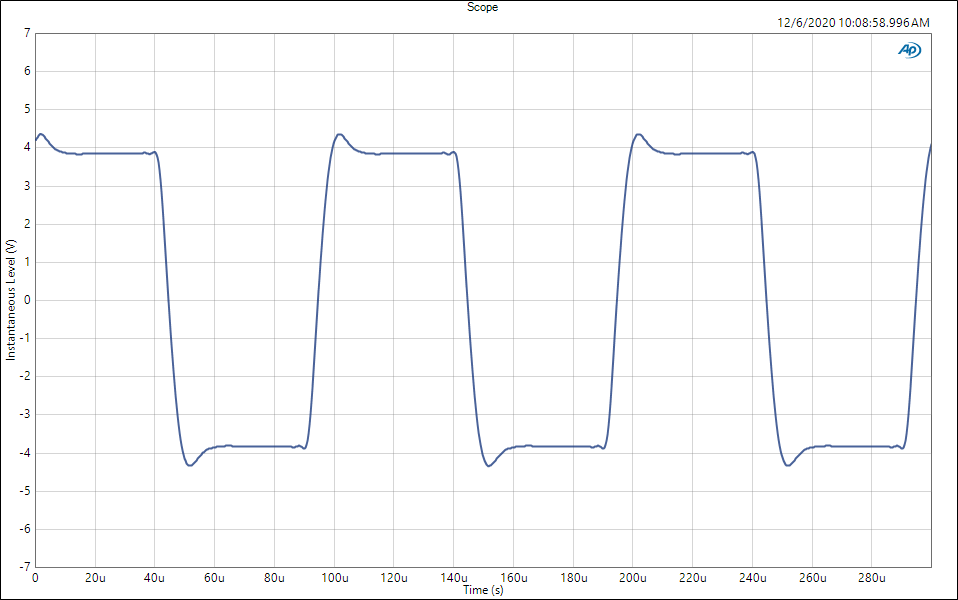 . . . is bandwidth limited to 250kHz. Due to limitations inherent to the Audio Precision APx555 B Series analyzer, these charts should not be used to infer or extrapolate the M28’s slew-rate performance. Rather, they should be seen as a qualitative representation of the M28’s limited bandwidth (e.g., slow rise time and mild overshoot in the corners), but also as a representation of the noise artifacts present due to the class-D amp topology that the M28 relies on. An ideal squarewave can be represented as the sum of a sinewave and an infinite series of its odd-order harmonics (e.g., 10kHz + 30kHz + 50kHz + 70kHz . . .). A limited bandwidth will show only the sum of the lower-order harmonics, which may result in noticeable undershoot and/or overshoot, and softening of the edges. In the case of the M28, however, what dominates the plateaus of the square wave in the top graph is a 500kHz (approximate) sine wave, the frequency at which the switching oscillator in the class-D amp is operating (see FFT below). With the bandwidth limited to 250kHz (bottom graph), the 500kHz switching signal is no longer visible. 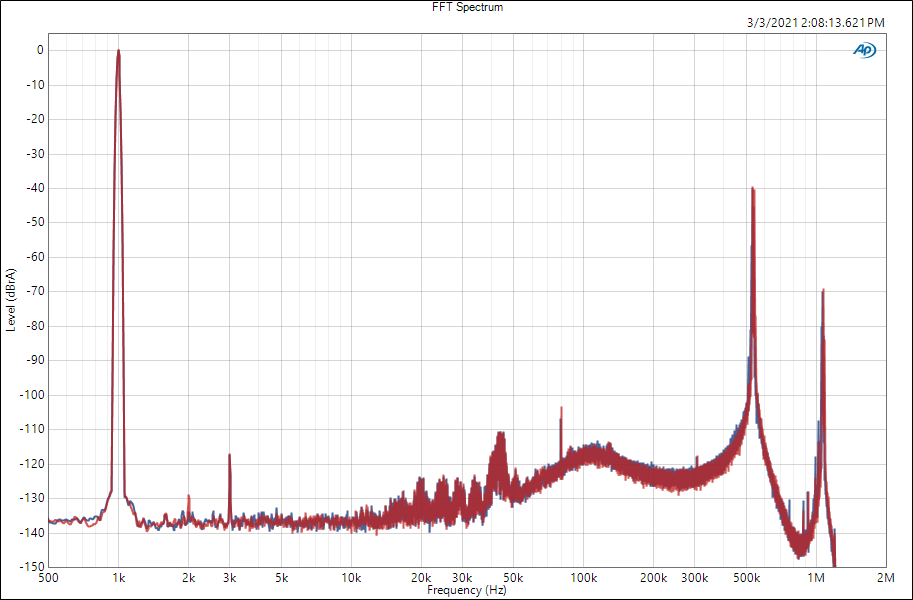 The M28’s topology relies on a roughly 500kHz modulation frequency in the feedback network of the amplifier. The graph above plots an FFT spectrum of the amplifier’s output at 10W into 8 ohms as it’s fed a 1kHz sine wave, but with a wide 1MHz bandwidth. We can see that the peak at about 500kHz is quite evident, at -40dBrA or 1% relative to the 1kHz signal. There is also a peak at 1MHz, (the second harmonic of the 500kHz peak), which is -70dBrA relative to the 1kHz signal. Those two peaks—the fundamental and its second harmonic—are direct results of the design of the C 298 amp modules. The noise around those very-high-frequency signals is always present within the amplifier, but far above the audioband, and therefore inaudible. The noise is also so high in frequency that any loudspeaker the amplifier is driving should filter it all out anyway, since the output of most tweeters begins to fall off not far above 20kHz. 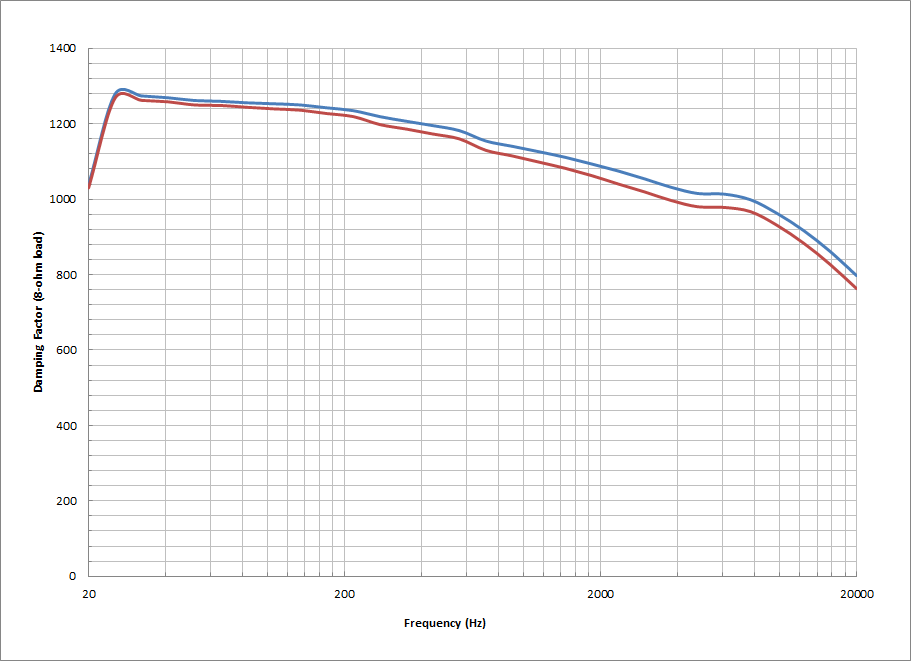 The chart above represents the damping factor (DF for an 8-ohm load) of the M28 as a function of frequency. Damping factor is calculated by measuring the voltages across an 8-ohm load (VL) and across no load (VNL), which, in our tests, is the 200k ohms input impedance of the analyzer, and then applying the formula DF = VL / (VNL – VL). Both channels show a general trend of a higher damping factor at lower frequencies, and lower damping factor at higher frequencies, varying by almost a factor of 2 between 20Hz and 20kHz. The left channel just barely outperformed the right (although they are very closely matched) with a peak value around 1270 at 30Hz, down to about 800 at 20kHz.