I measured the Emotiva Airmotiv GR1 headphones using laboratory-grade equipment: a GRAS Model 43AG ear/cheek simulator/RA0402 ear simulator with KB5000/KB5001 simulated pinnae, and a Clio 12 audio analyzer. For isolation measurements, I used a laptop computer running TrueRTA software with an M-Audio MobilePre USB audio interface. The headphones were amplified using a Musical Fidelity V-CAN. These are “flat” measurements; no diffuse-field or free-field compensation curve was employed. If you’d like to learn more about what our measurements mean, click here. 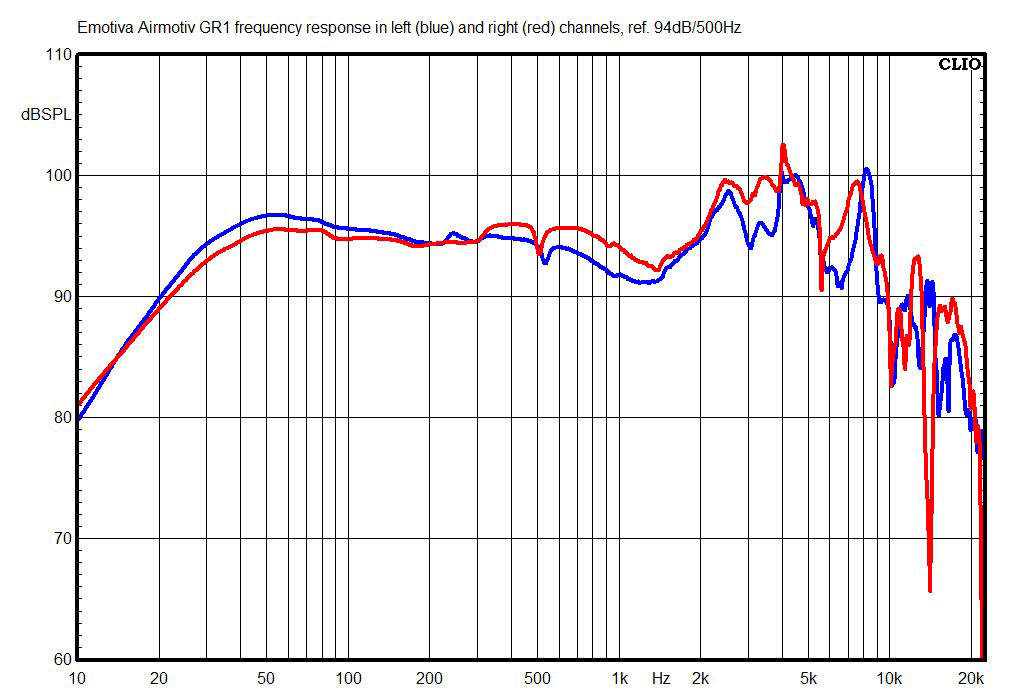 This chart shows the Airmotiv GR1s’ frequency response. Nothing really out of the ordinary here—one could criticize the GR1s for being a little light in the treble and the bass, and a little bumped-up between 300 and 900Hz, but as we’ll see in the comparison chart, they’re roughly in line with industry norms. 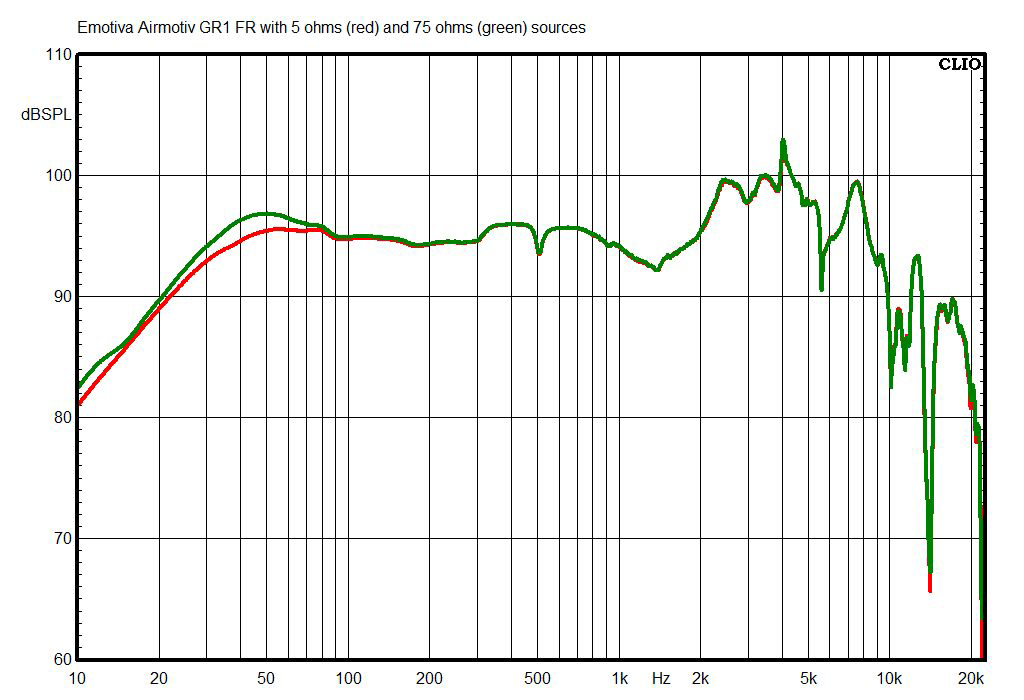 This chart shows how the Airmotiv GR1s’ tonal balance changes when they’re used with a high-impedance (75 ohms) source, such as a cheap laptop or some cheap professional headphone amps, or some exotic tube amps. There’s a little bit more bass with high-impedance sources. 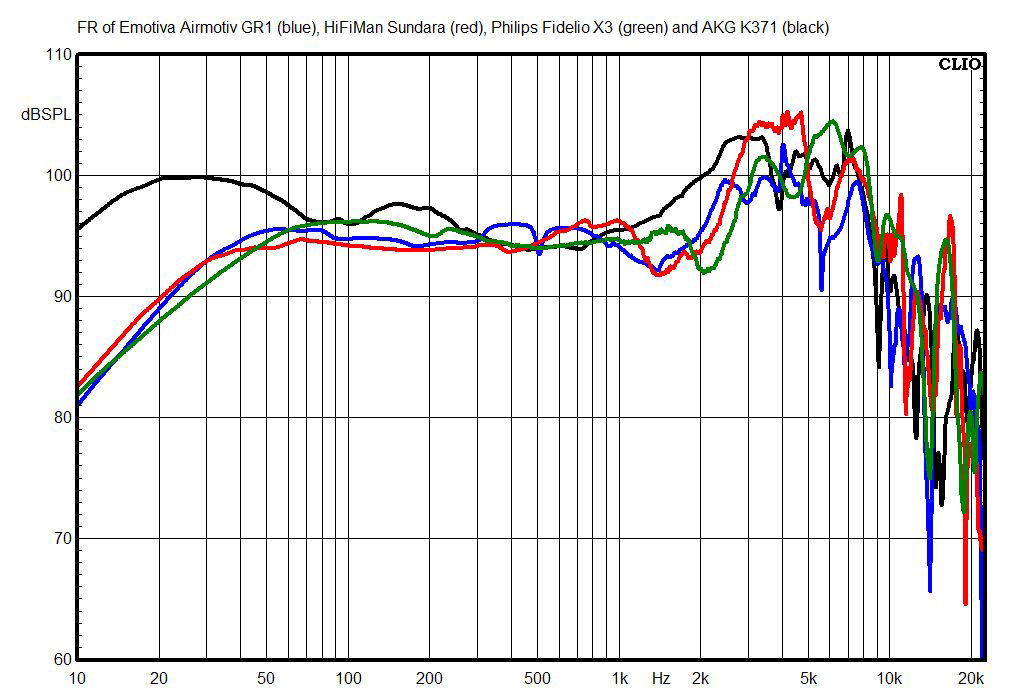 This chart shows the Airmotiv GR1s’ right-channel response compared with two somewhat similar models (HiFiMan Sundara and Philips Fidelio X3 headphones), and the AKG K371 headphones, which are said to be very close to the Harman curve target. The measurements of the GR1s and the Fidelio X3s are quite similar (as expected from my listening tests), the Sundaras are more trebly, and the K371s have more bass and more treble—which the Harman research shows results in a subjectively flat response. 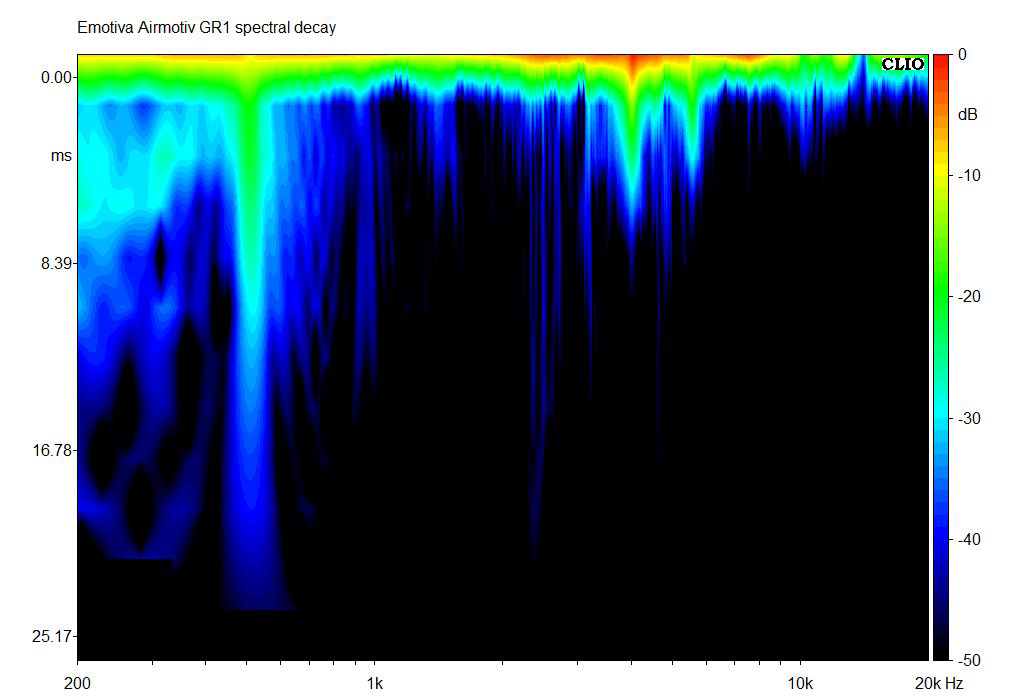 The GR1s’ spectral decay shows fairly strong resonances at about 500Hz, 4kHz, and 6kHz, which correspond with frequency-response dips and peaks in those regions; they’re high-Q resonances; I expect they’re not overtly audible but that they do affect the sound a bit. 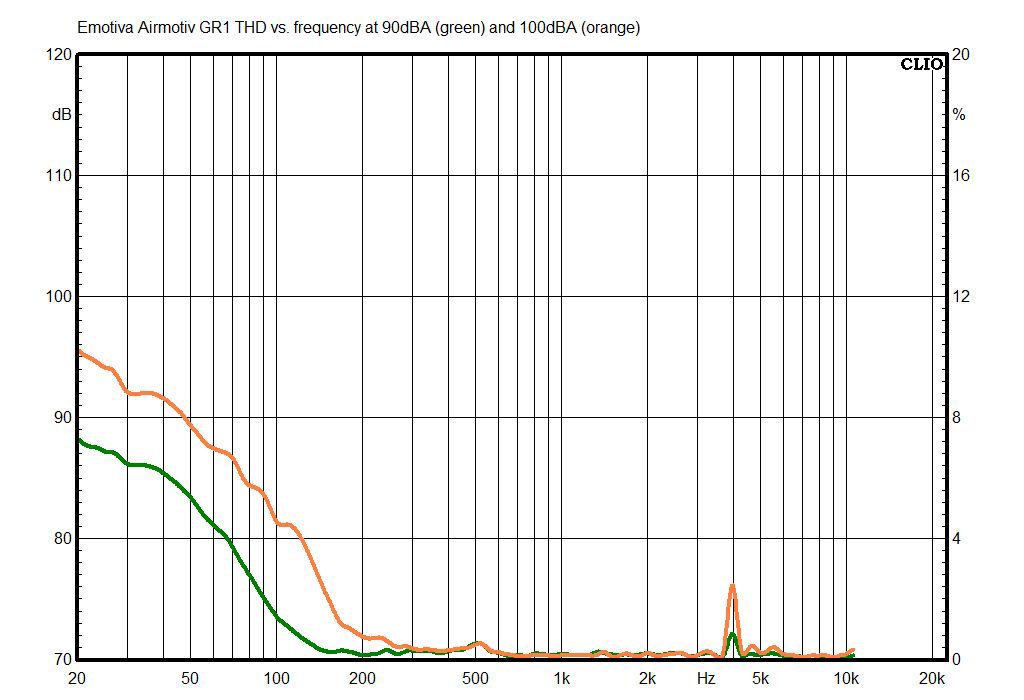 As expected from my listening tests, the Airmotiv GR1s do show some distortion at high listening levels, getting into the range of 5% to 10% below 100Hz at the extremely high level of 100dBA, measured with pink noise. So if you like to listen loud, these aren’t the headphones for you—but unless you relish the idea of crippling tinnitus and not being able to understand normal conversation by the time you’re 60, you should just get used to lower volumes instead. 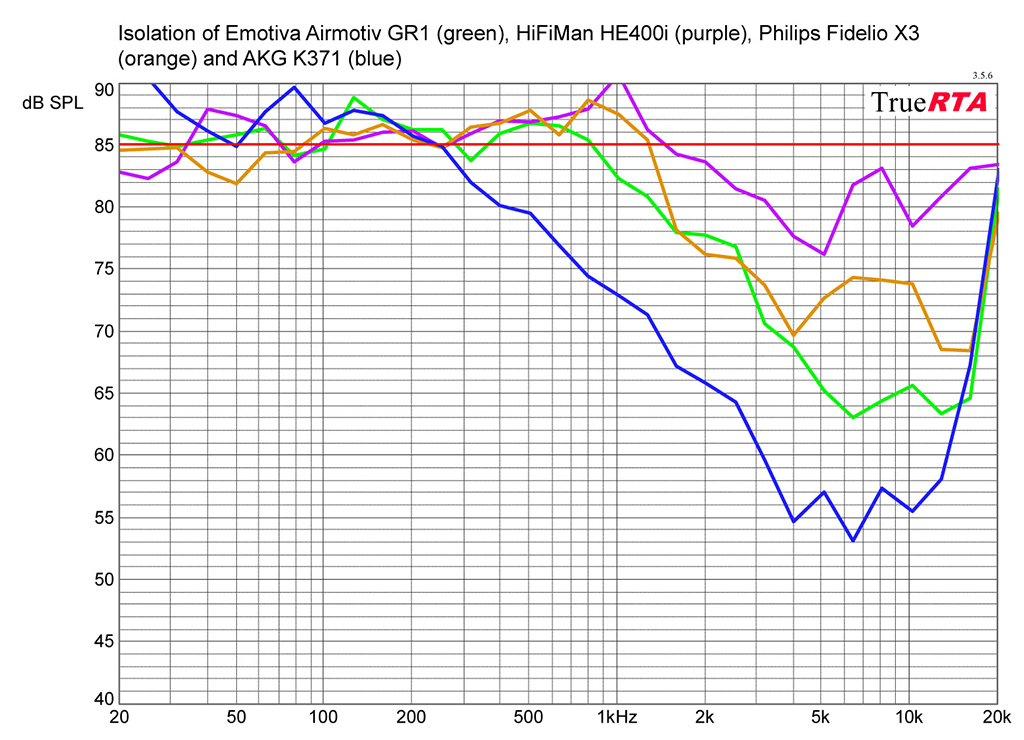 In this chart, the external noise level is 85dB SPL, and numbers below that indicate the degree of attenuation of outside sounds. The lower the lines, the better the isolation. I compared the GR1s with the similar Philips Fidelio X3, the closed-back AKG K371, and the fully open-back HiFiMan HE400i headphones. This is about the level of isolation I’d expect for semi-open headphones. 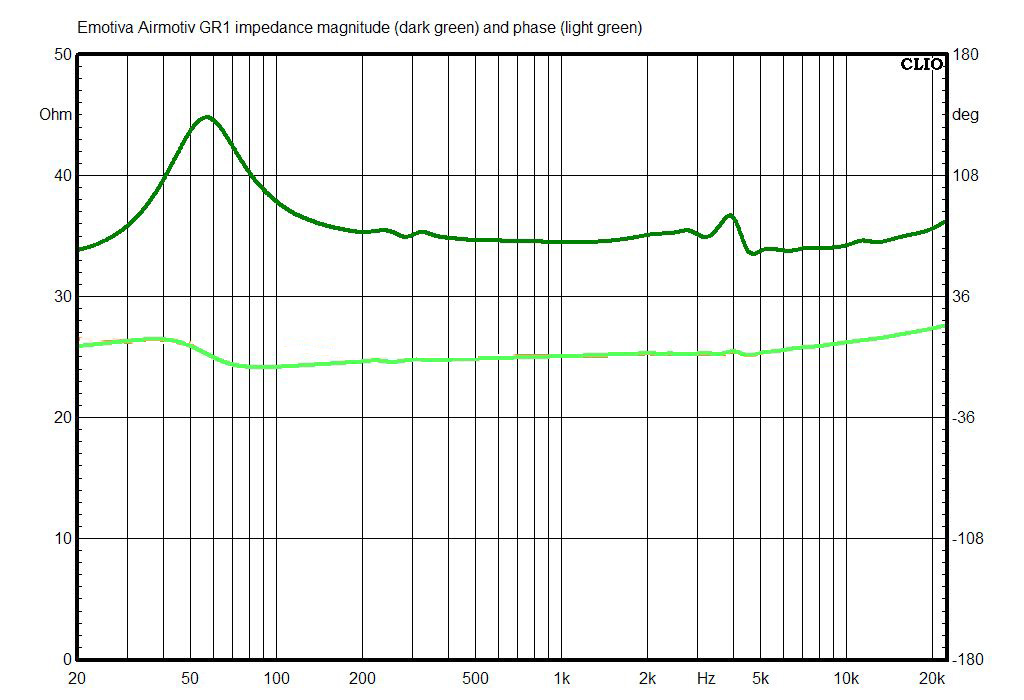 The Airmotiv GR1s’ impedance magnitude curve is typical for a dynamic-driver design, hovering in the mid-30-ohms range except for a peak at the driver’s resonant frequency of 58 ohms. In the electrical phase plot, there’s a little bit of a wrinkle in the bass, which is why the bass response increases a bit with high-impedance sources.

Sensitivity of the Airmotiv GR1s, measured between 300Hz and 3kHz, using a 1mW signal calculated for 32 ohms rated impedance, is 103.5dB. That’s high enough that the Airmotiv GR1s should play loudly from pretty much any source.

Bottom line: Other than high distortion at very loud listening levels, the Airmotiv GR1s are a very normal set of headphones that are free of troublesome quirks.