I measured the Audeze Euclid earphones using laboratory-grade equipment: a GRAS Model 43AG ear/cheek simulator with the RA0402 high-resolution ear simulator with KB5000/KB5001 simulated pinnae, and a Clio 10 FW audio analyzer. For isolation measurements, I used a laptop computer running TrueRTA software with an M-Audio MobilePre USB audio interface. The headphones were amplified using a Musical Fidelity V-CAN. These are “flat” measurements; no diffuse-field or free-field compensation curve was employed. If you’d like to learn more about what our measurements mean, click here. 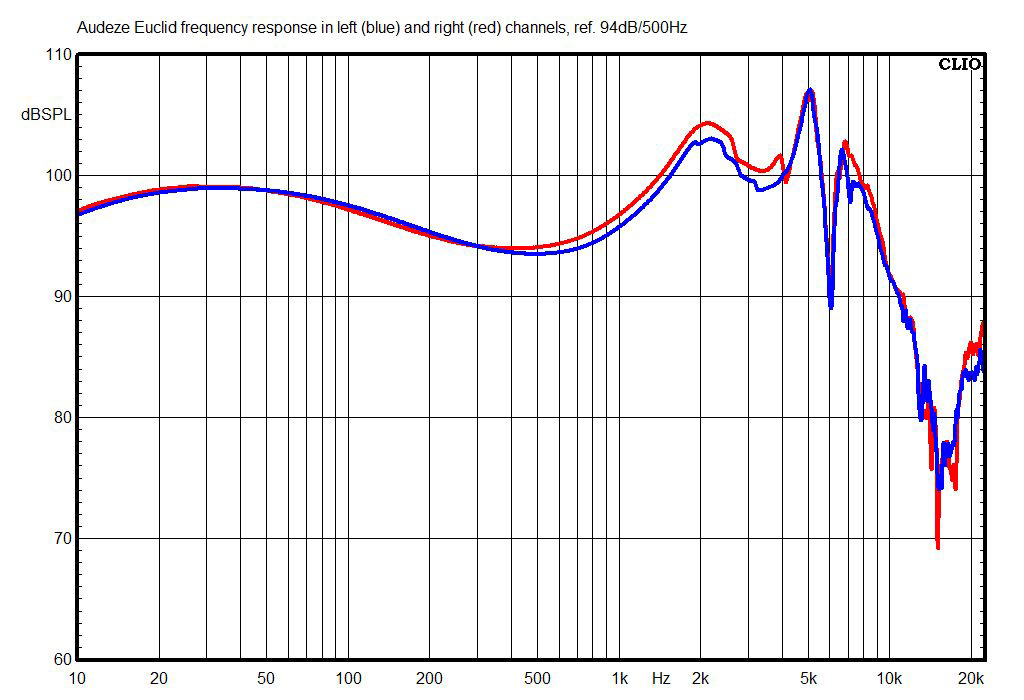 This chart shows the Euclids’ frequency response. This is mostly a “by the book” earphone response, except that the peak at 5kHz would usually be lower in magnitude than the peak at 2kHz, and the bass seems a little light relative to the upper mids and treble. 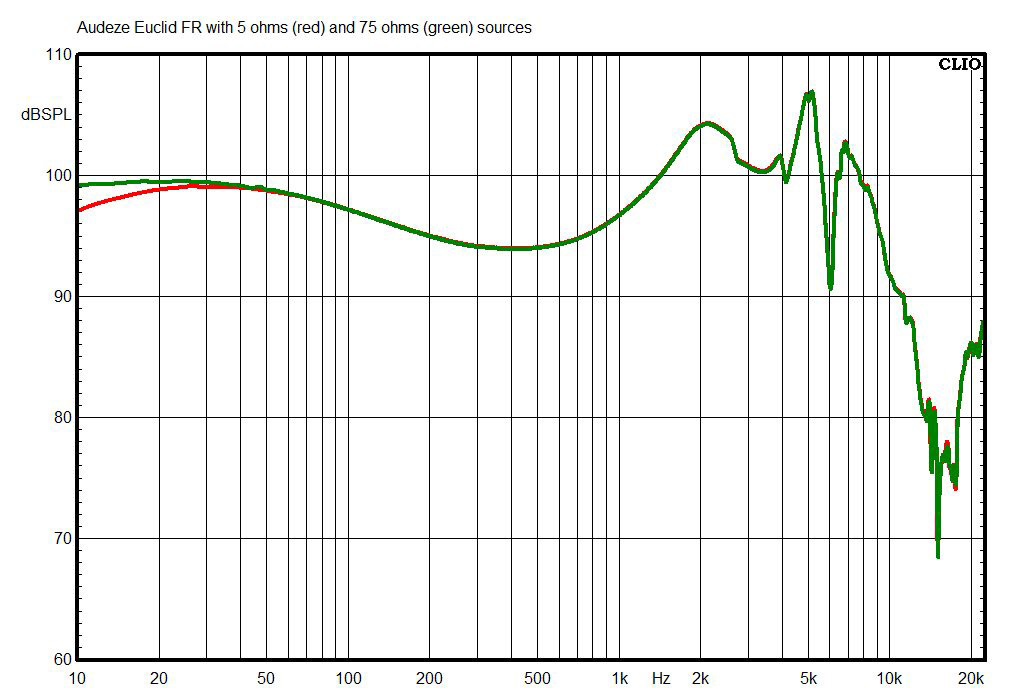 This chart shows how the Euclids’ tonal balance changes when they’re used with a high-impedance (75 ohms) source, such as a cheap laptop or some cheap professional headphone amps, or some exotic tube amps. As expected with planar-magnetic drivers, whose impedance is almost entirely resistive, there’s very little difference. 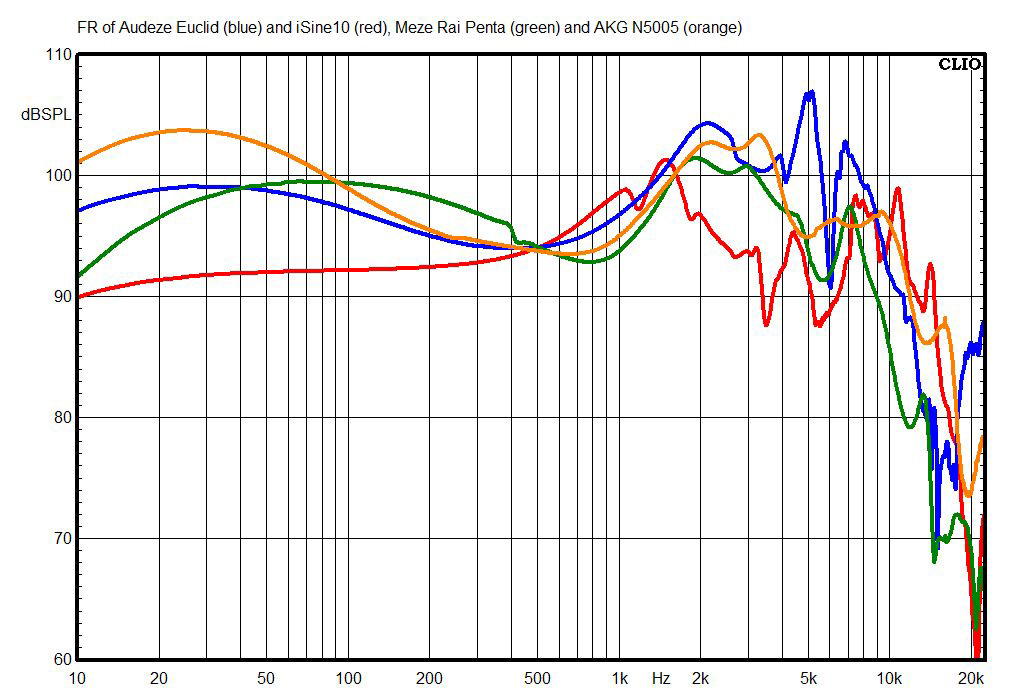 This chart shows the Euclids’ right-channel response compared with Audeze’s iSine10 open-back earphones, the Meze Rai Pentas, and the AKG N5005s, which are said to be the earphones that come closest to the Harman curve target. Obviously, the Euclids are well within the range of normal—with a few dB less bass than the Harman curve, and more energy above 5kHz. 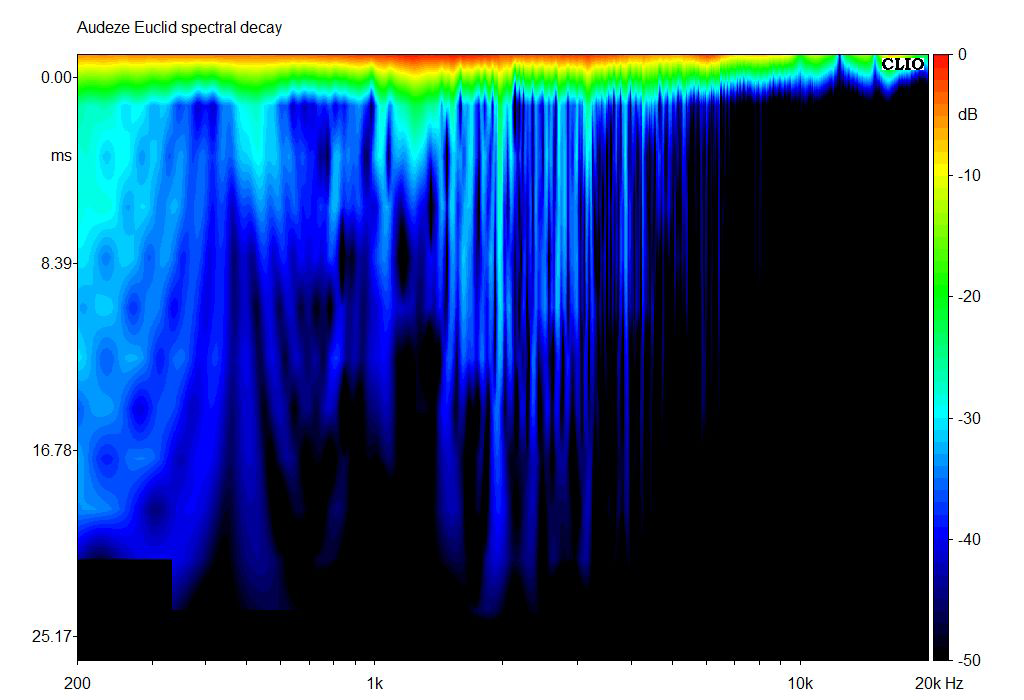 I learned a lot from the Euclids’ spectral-decay plot. I’ve seen that scattering of very high-Q resonances between 1 and 5kHz in most planar-magnetic drivers, and I always assumed it was caused by reflections between the large, flat planar driver and the flat metal “cheek” plate of the ear/cheek simulator. But here, the earphone is inserted straight into a steel coupler and the cheek plate is not used. So apparently, I was wrong—those narrow resonances are apparently inherent to planar-magnetic drivers, no matter what size they are. Anyway, I don’t know how audible they are; I suspect they may contribute an added sense of spaciousness. 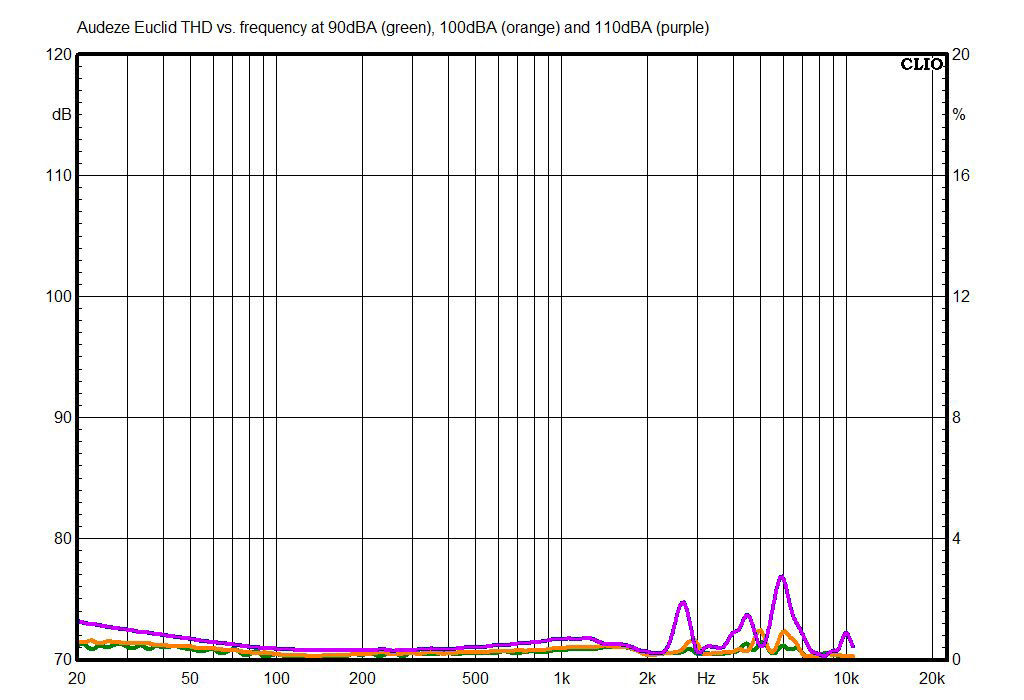 It looks like Audeze’s 120dB claim for the Euclids’ max level isn’t so audacious after all. There’s basically no distortion at my normal test levels of 90dBA and 100dBA, measured with pink noise. I raised the level to 110dBA just to see what would happen, and all I got were a few narrow distortion spikes (up to around 2% THD) at 2.7, 4.4, and 6kHz. Using dBA with pink noise is a very conservative method of volume measurement; I’d guess that my 110dBA measurement was taken somewhere around the same level as Audeze’s 120dB measurement, which I’d guess was done with a 500Hz or 1kHz sine tone. 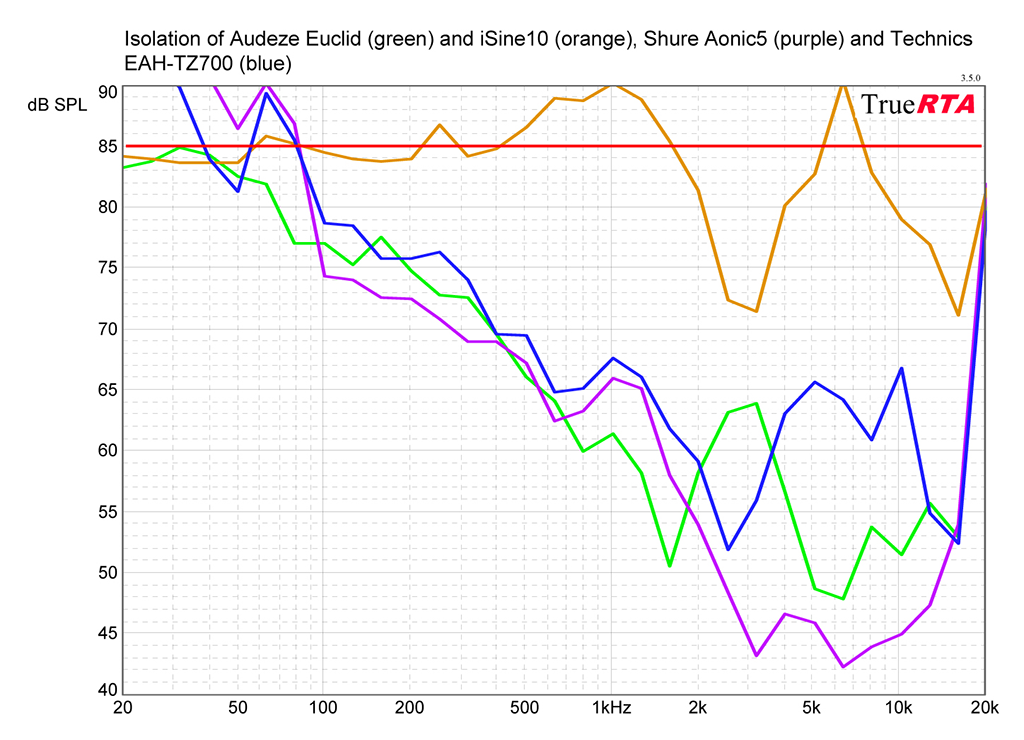 In this chart, the external noise level is 85dB SPL, and numbers below that indicate the degree of attenuation of outside sounds. The lower the lines, the better the isolation. The isolation of the Euclids is comparable to that of typical high-end earphones, and far better than you’ll get with Audeze’s open-back earphones (such as the iSine10 shown in the chart). 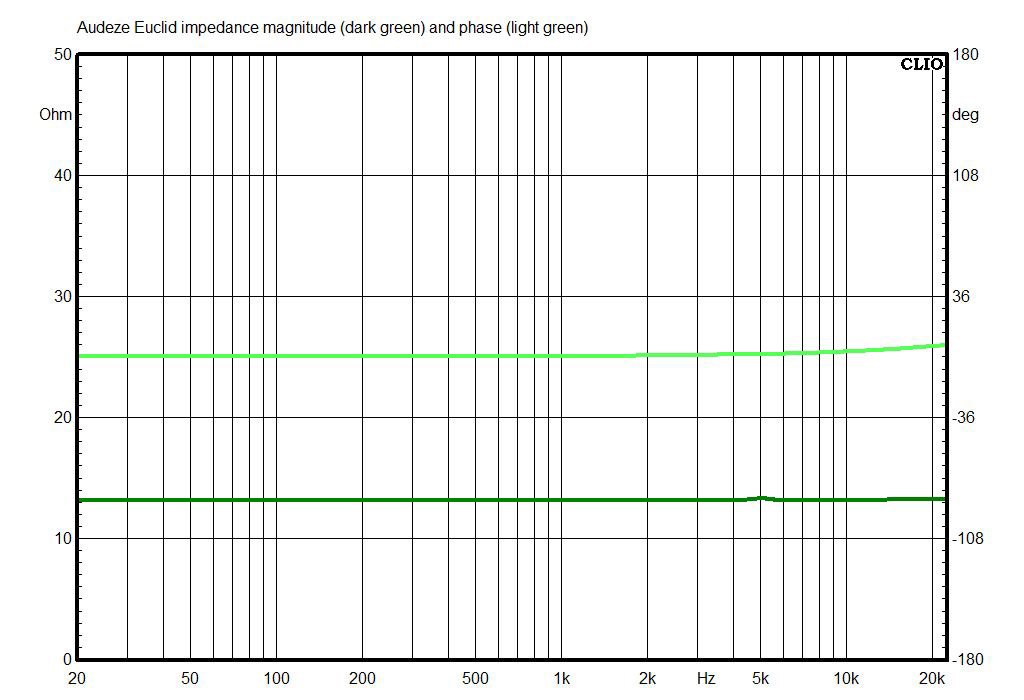 Sensitivity of the Euclids, measured between 300Hz and 3kHz, using a 1mW signal calculated for 12 ohms rated impedance, is 97.9dB. That’s about 7dB lower than Audeze’s rating, but still sensitive enough that the Euclids will play reasonably loud from a smartphone or tablet.

Bottom line: The Audeze Euclid earphones measure very well; I find nothing in the measurements that makes me question my very enthusiastic assessment of their sound.