I measured the Performance 880 headphones using laboratory-grade equipment: a G.R.A.S. Model 43AG ear/cheek simulator/RA0402 ear simulator with KB5000/KB5001 simulated pinnae, and a Clio 10 FW audio analyzer. For isolation measurements, I used a laptop computer running TrueRTA software with an M-Audio MobilePre USB audio interface. The headphones were amplified using a Musical Fidelity V-CAN and Schiit Audio Magnius. Measurements with the Sirius Bluetooth adapter were made using an Mpow BH259A Bluetooth transmitter. These are “flat” measurements; no diffuse-field or free-field compensation curve was employed. If you’d like to learn more about what our measurements mean, click here. 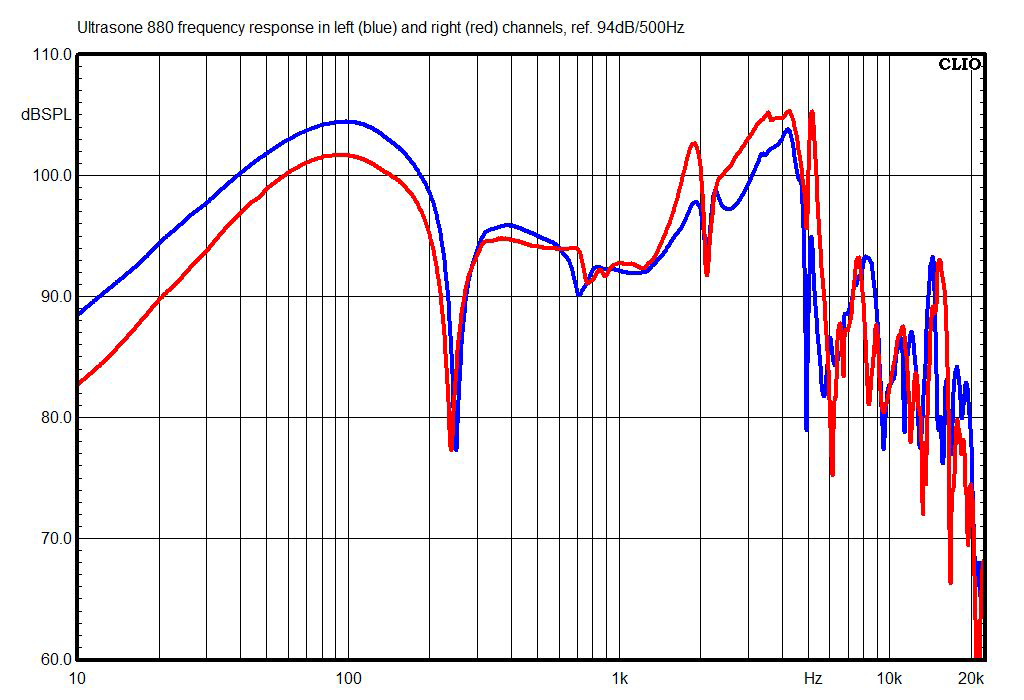 The first chart shows the frequency response. It’s well-balanced from bass to mids to treble, but it’s an unusual-looking curve nonetheless. The bass has more of a resonant peak than most headphones do, with a lot of output centered at 100Hz. There’s a cancellation dip at 240Hz; the results of this can be seen a few charts down. Also unusual is that there’s more energy up at 5kHz than there is at 2kHz; it’s not a glaring difference, but it’s probably why I felt cymbals sounded a little bright. 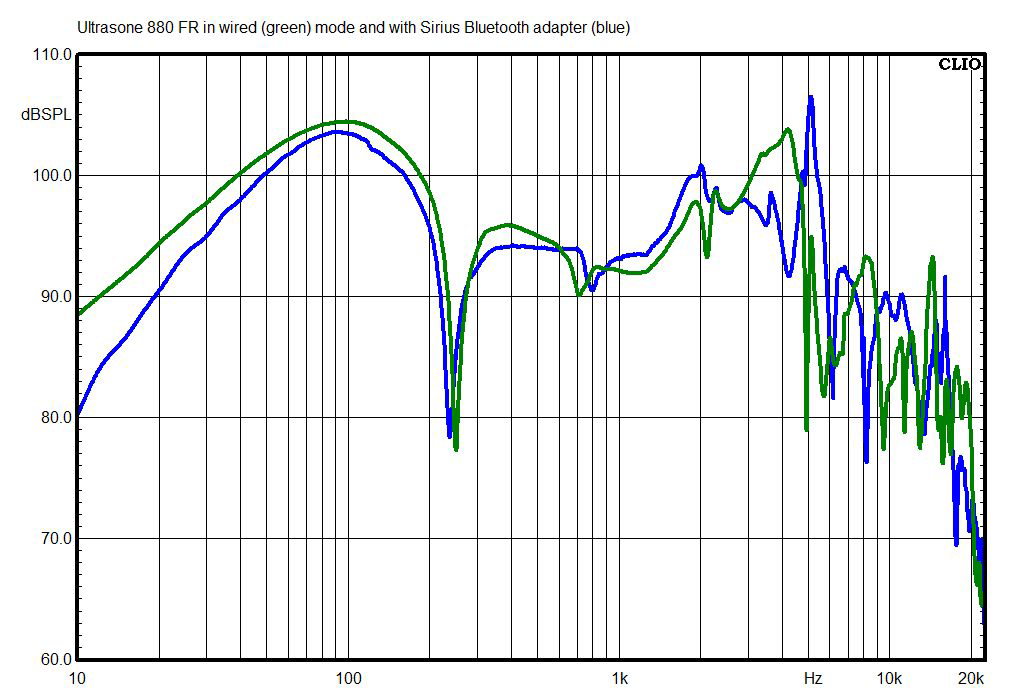 The differences in frequency response caused by the Bluetooth adapter are negligible; what little you see here may be entirely due to positioning differences of the headphone on the ear/cheek simulator after the headphones were removed to install the adapter. 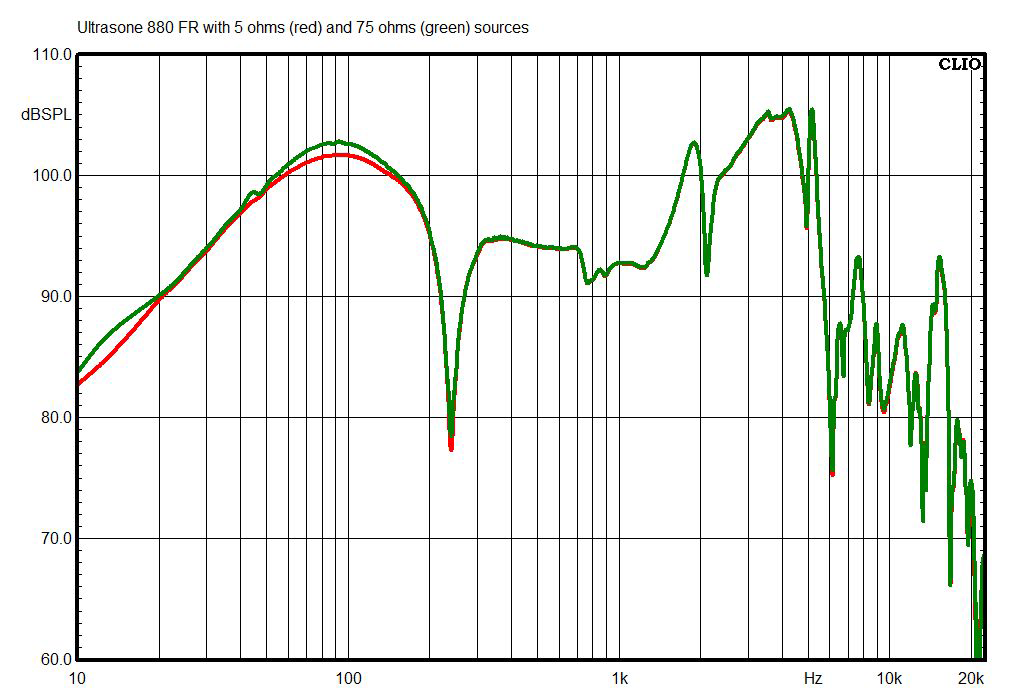 This chart shows how the Performance 880s’ tonal balance changes when they’re used with a high-impedance (75 ohms) source, such as a cheap laptop or some cheap professional headphone amps, or some exotic tube amps. It’s not a big difference; you’ll get an extra dB or so of bass with the high-impedance source. 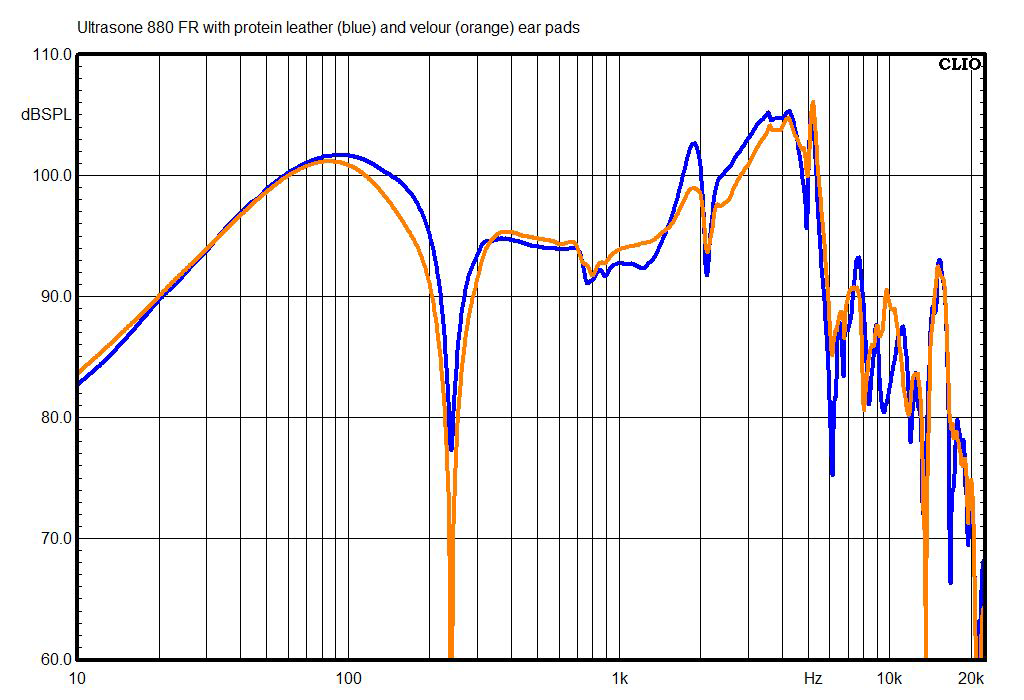 The velour earpads don’t have a huge effect on the tonal balance, but they definitely tame the upper bass by a few dB, which is definitely a good thing in this case. 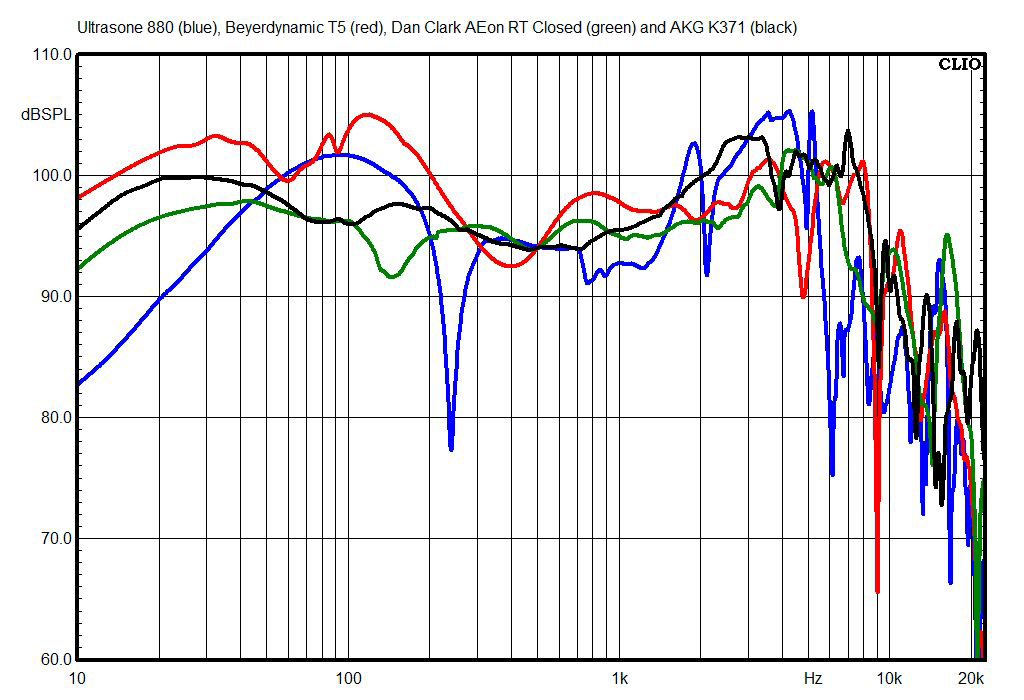 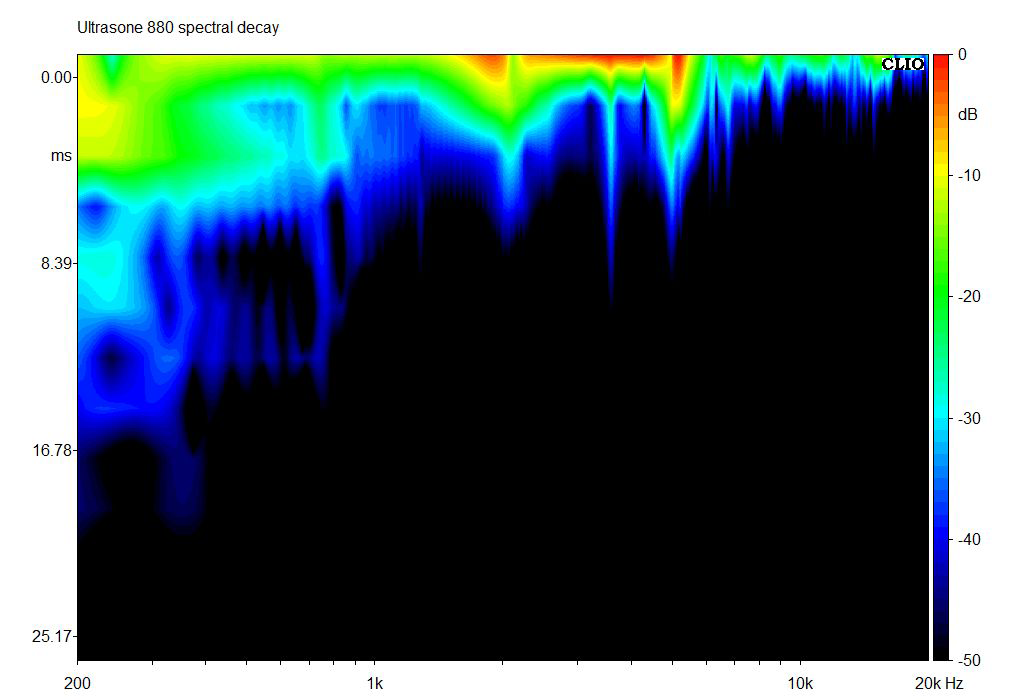 The Performance 880s show some fairly strong resonances around 1kHz and 5kHz, but they’re well-damped, and below audibility within a few cycles. 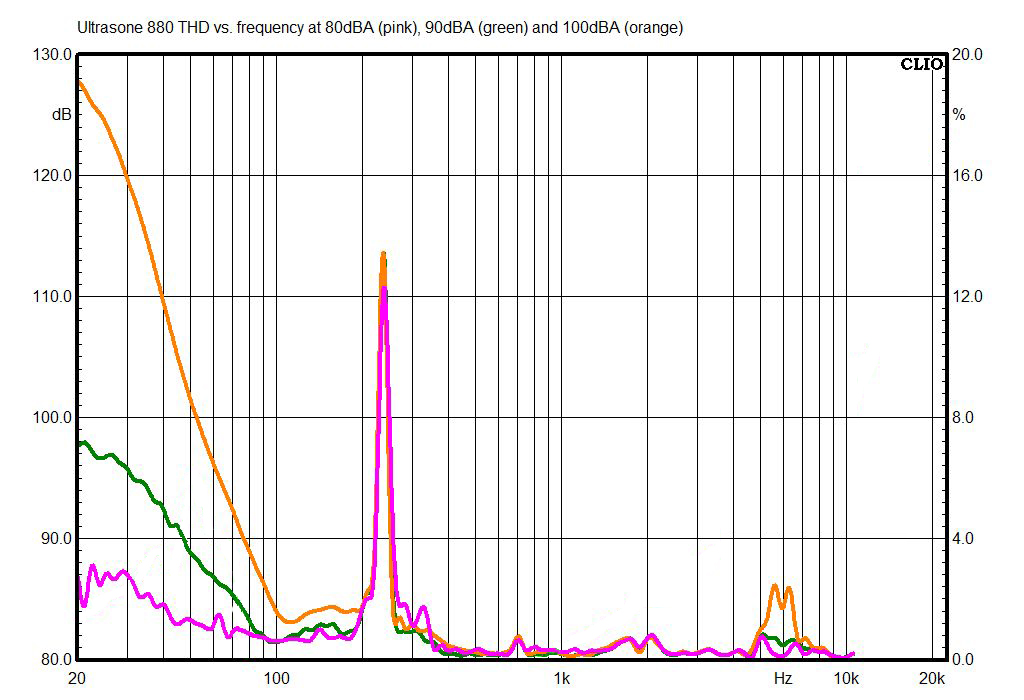 The harmonic distortion plot for the Performance 880s looks a little weird. The distortion is high in the bass frequencies. At the loud level of 90dBA, it would likely be audible; at the crazy-high level of 100dBA, it would definitely be audible. There’s also a strange distortion spike at 240Hz, which corresponds precisely with the weird dip in frequency response at that frequency. Apparently the dip, likely caused by an acoustical cancellation and therefore impossible to “fill in” by increasing signal level, is the cause of the distortion, which is at the same THD percentage regardless of input voltage. (I added the 80dBA measurement, which I don’t usually do, just to confirm this.) I noticed some fleeting bass distortion during my listening, but didn’t think much of it because distortion can be caused by the source device or may be inherent to the program material, but it appears I was hearing a flaw in the headphones’ performance. 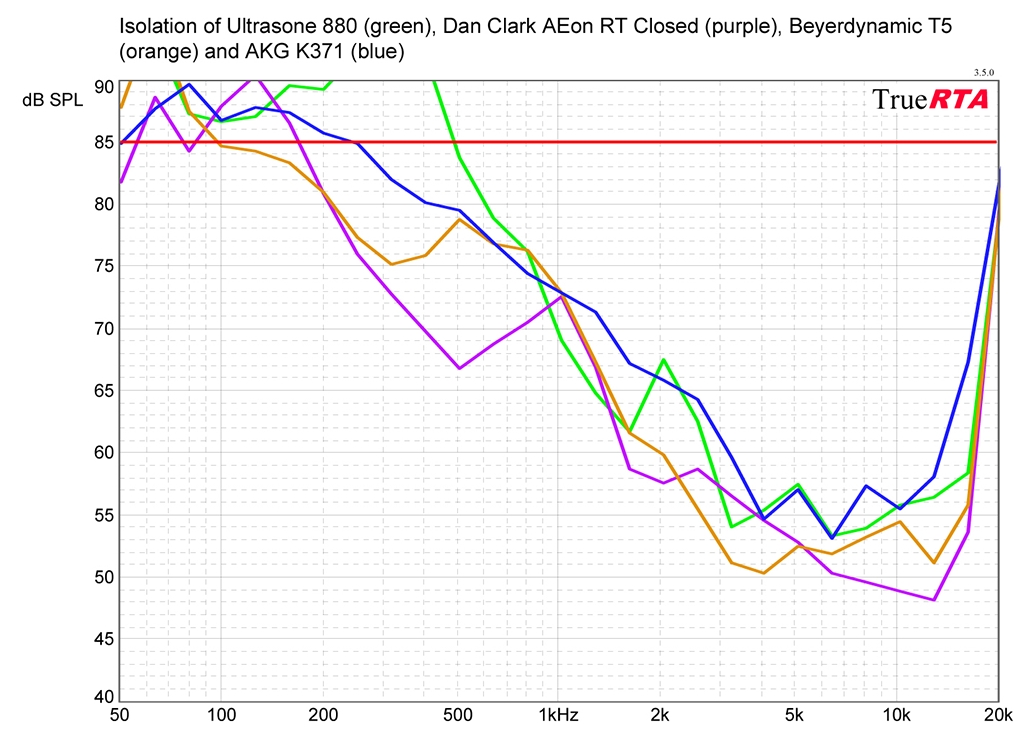 In this chart, the external noise level is 85dB SPL, and numbers below that indicate the degree of attenuation of outside sounds. The lower the lines, the better the isolation. The isolation of the Performance 880s is not quite as good below 1kHz as some other large, closed-back audiophile headphones. 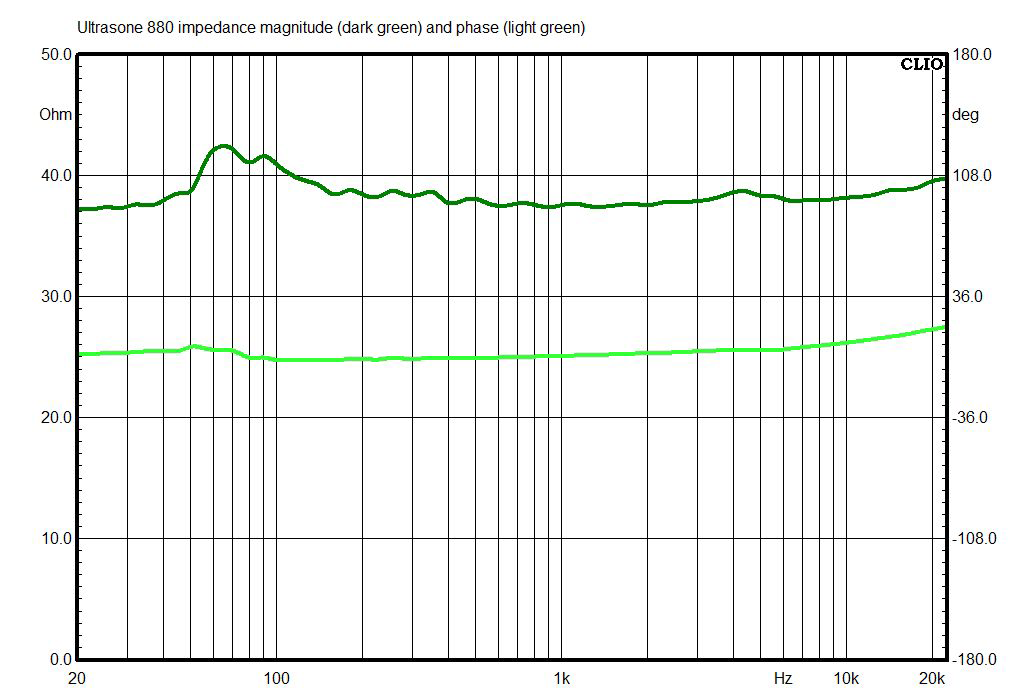 The Performance 880s’ impedance magnitude is a little unusual for dynamic-driver headphones, typically running about 38 ohms, but with a smaller resonant peak in the bass than I’d expect to see from dynamic drivers. The curve also looks less smooth than usual; I have no idea why. The impedance phase angle is pretty much flat.

Sensitivity of the Performance 880s, measured between 300Hz and 3kHz, using a 1mW signal calculated for 32 ohms rated impedance, is 98dB, which is a little lower than average, so a few smartphones and tablets might not get them cranking as loud as you want.