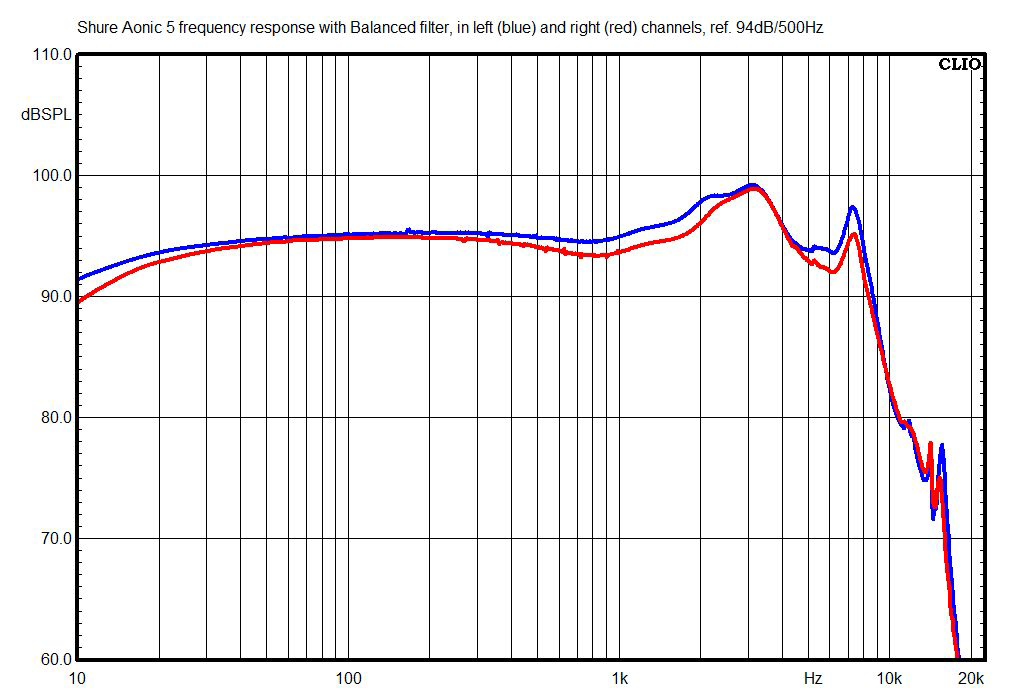 The frequency response of the Aonic 5s (shown with the Balanced filter) is unusually flat for earphones; usually we see a big bump in the bass and a much larger rise around 3kHz. On this test, this result indicates that the Aonic 5s will sound subjectively mid-boosted. 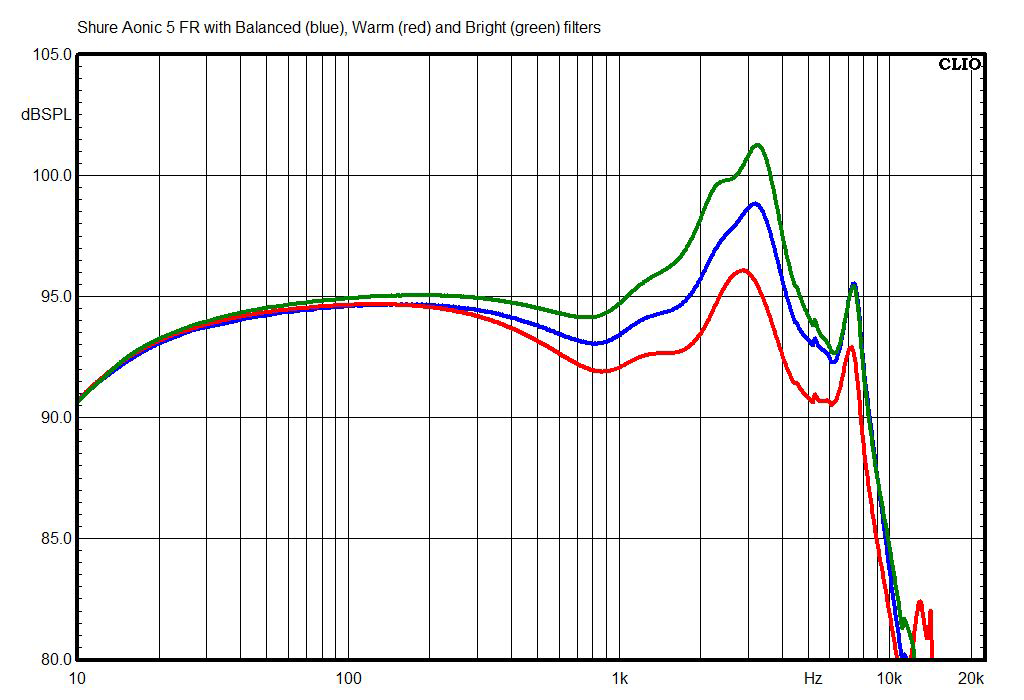 This chart shows the response with the Balanced, Warm, and Bright filters, with the dB resolution doubled to 5dB per major division. Most of the action centers around 3kHz; changing the filter causes a roughly 2.5dB tilt either way in the tonal balance. 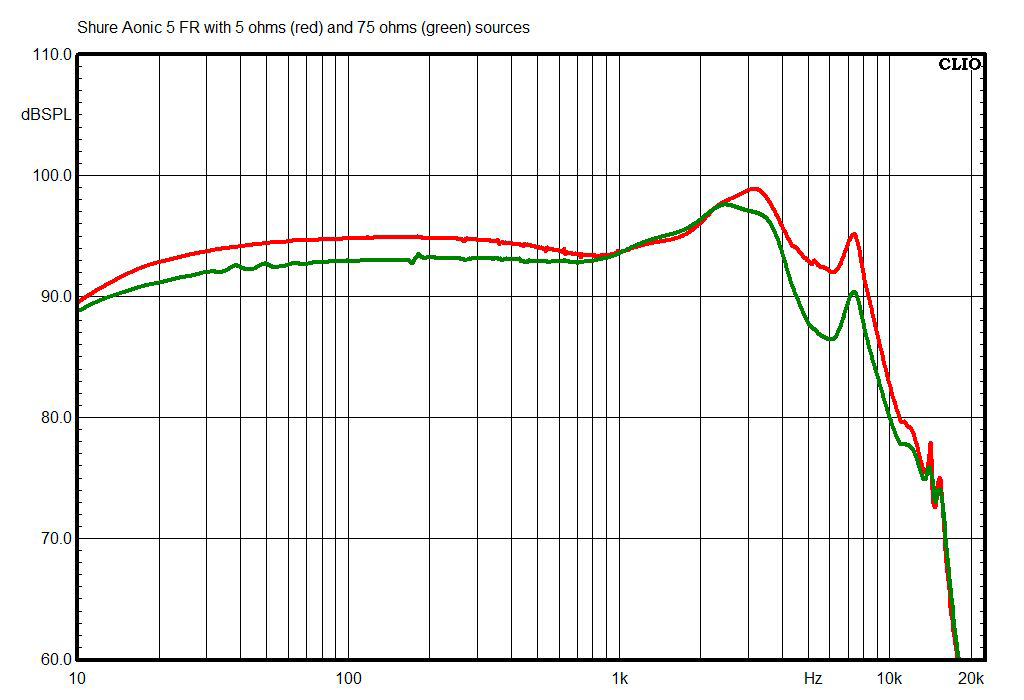 This chart shows how the Aonic 5s’ tonal balance (with the Balanced filter) changes when they’re used with a high-impedance (75 ohms) source, such as a cheap laptop or some cheap professional headphone amps, or some exotic tube amps. This is about as big a difference as I’ve measured on this test, with the high-impedance source reducing bass by about 2dB and treble by 2 to 5dB (and thus effectively boosting the middle of the midrange). I’d guess that with an all-tube (i.e., non-hybrid) amp, the Aonic 5s will sound a lot fuller, although if the amp is noisy, the Aonic 5s’ very high sensitivity will make that noise more audible. 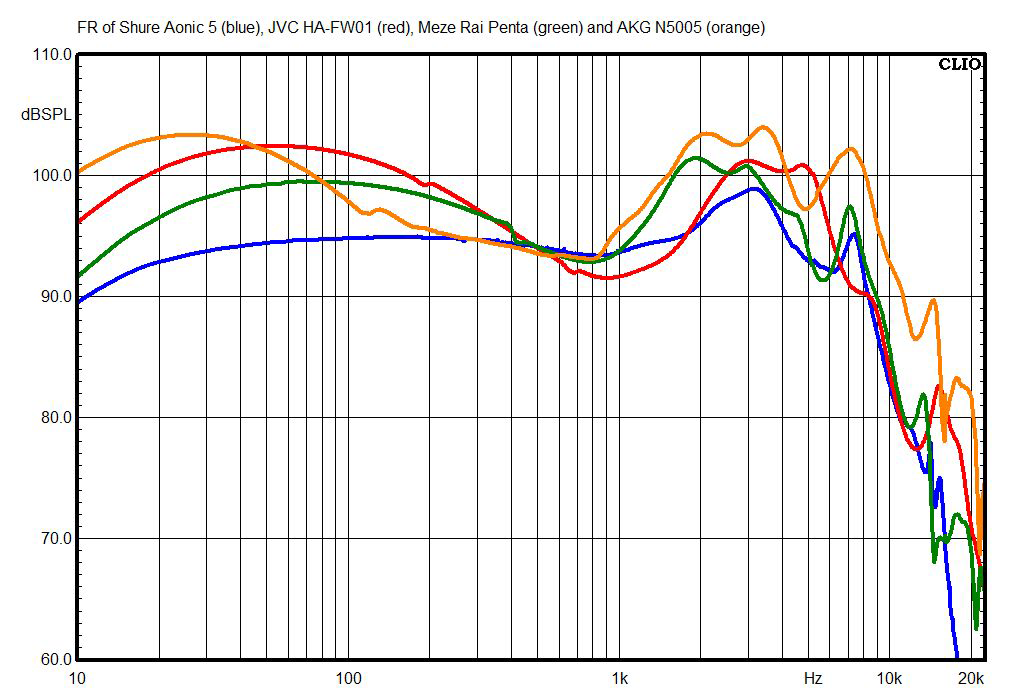 This chart shows the Aonic 5s’ right-channel response with the Balanced filter, compared with several other earphones -- including the AKG N5005s, which are the earphones said to measure closest to the Harman curve, when used with the reference filter attachment. You can see how unusually flat the Aonic 5s are. 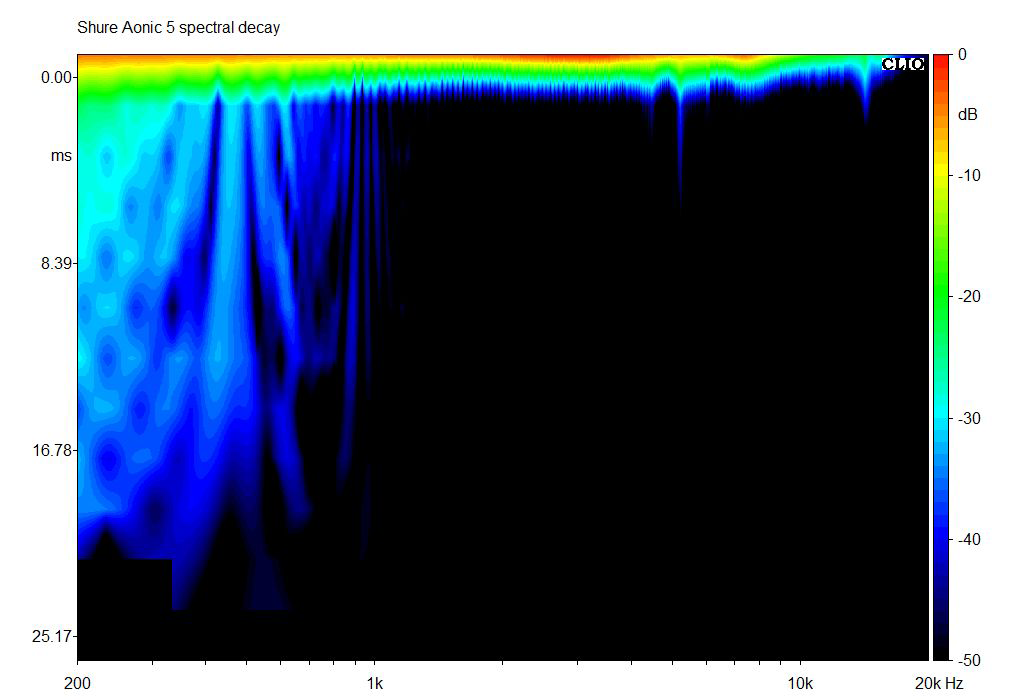 The Aonic 5s’ spectral-decay plot is super-clean, with no notable resonances. 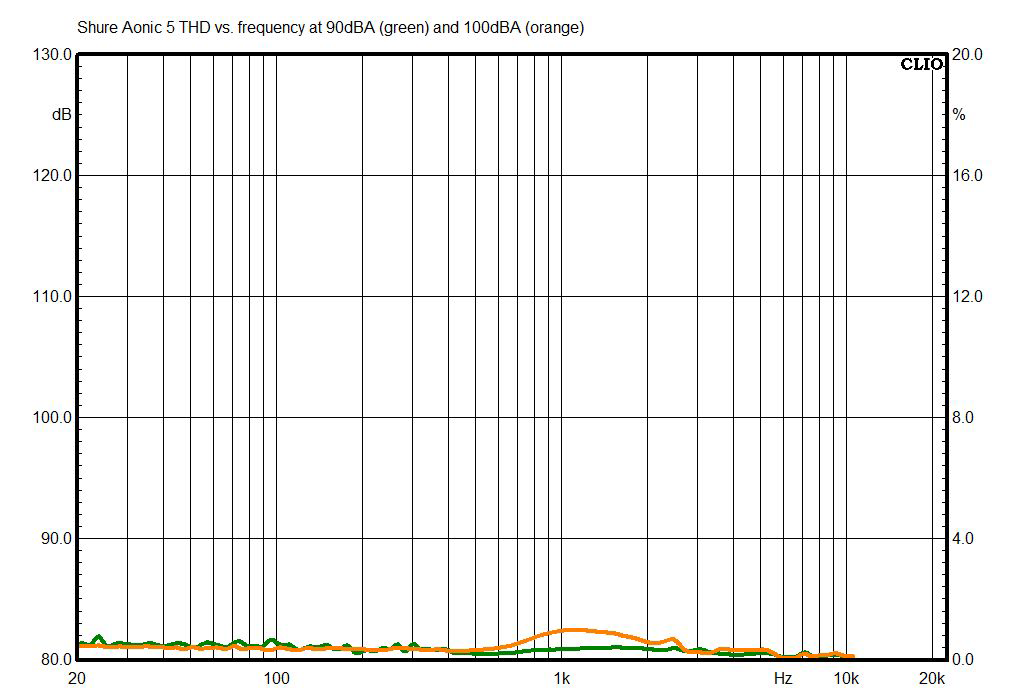 Harmonic distortion in the Aonic 5s is trivial even at the crazily high listening level of 100dBA, measured with pink noise. 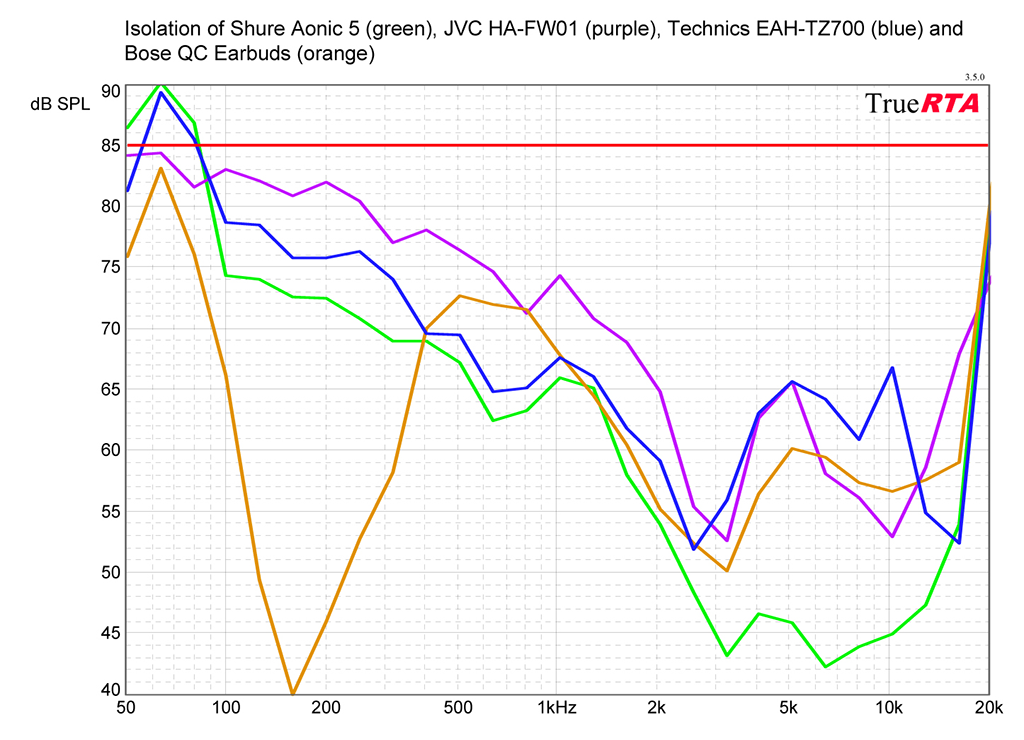 In this chart, the external noise level is 85dB SPL, and numbers below that indicate the degree of attenuation of outside sounds. The lower the lines, the better the isolation. The isolation of the Aonic 5s is outstanding for passive earphones. I also threw in the measurements of the new Bose QC Earbuds so you can see how the Aonic 5s compare with a model that has excellent active noise canceling. 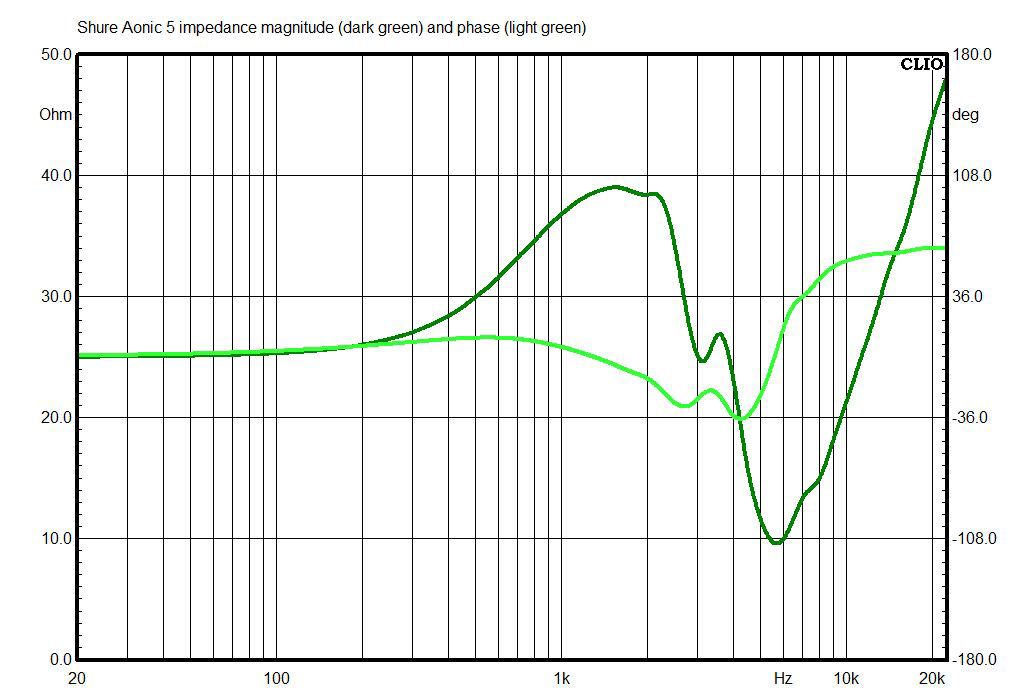 The Aonic 5s’ impedance shows large swings in magnitude and phase above 1kHz, which is why the response varies so much when you switch to a high-impedance source.

Sensitivity of the Aonic 5s, measured between 300Hz and 3kHz, using a 1mW signal calculated for 36 ohms rated impedance, is 116.3dB, so any source device can easily drive them.