I measured the Dan Clark Audio Æon RT Closed headphones using laboratory-grade equipment: a G.R.A.S. Model 43AG ear/cheek simulator/RA0402 ear simulator with KB5000/KB5001 simulated pinnae, and a Clio 10 FW audio analyzer. For isolation measurements, I used a laptop computer running TrueRTA software with an M-Audio MobilePre USB audio interface. The headphones were amplified using a Musical Fidelity V-CAN and Schiit Morpheus. These are “flat” measurements; no diffuse-field or free-field compensation curve was employed. If you’d like to learn more about what our measurements mean, click here. 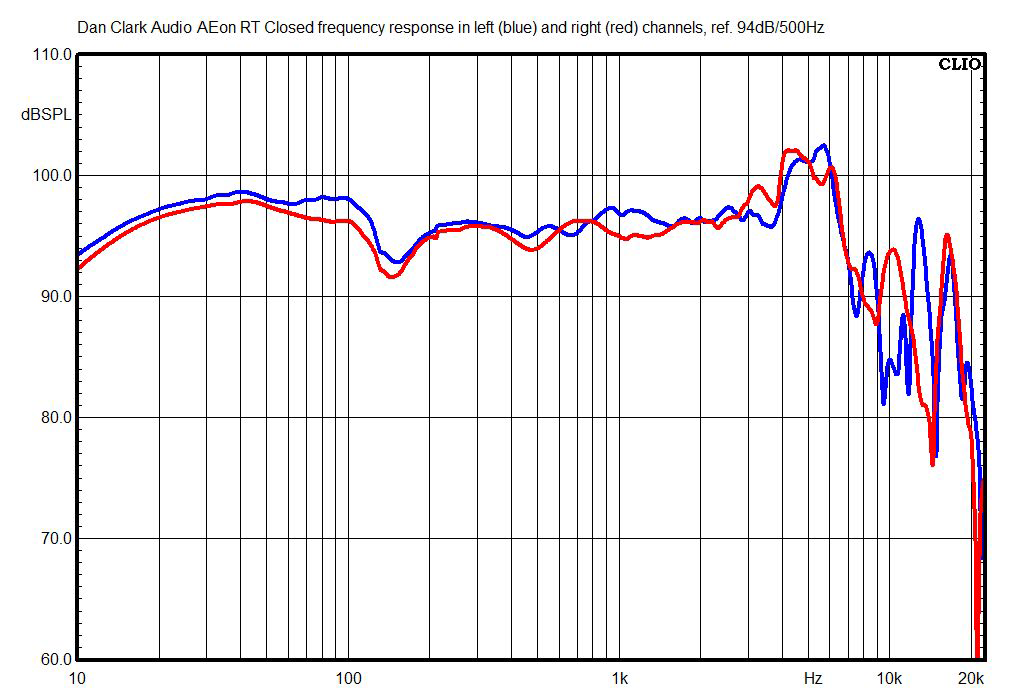 The first chart shows the frequency response with the 1-notch white filter, which was my favorite of the ones supplied. It’s unusual to see such a flat response on this measurement; most headphones show a large (~10dB) peak around 2 or 3kHz, and a smaller peak around 6 or 7kHz. These have just a modest peak between 4 and 5kHz. 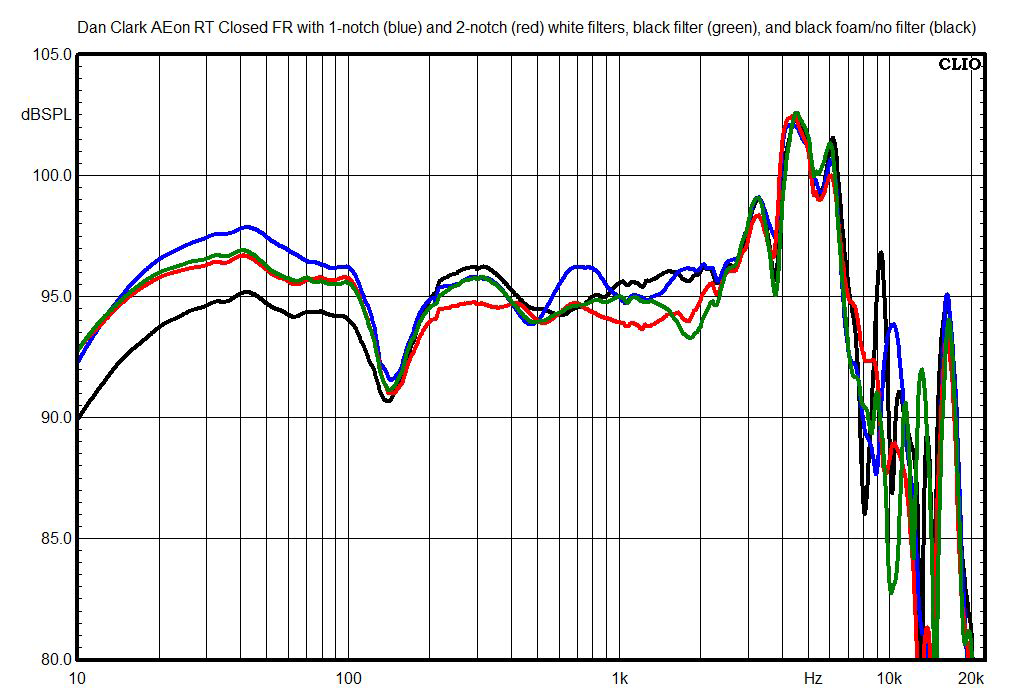 This chart shows the effects of the different supplied filters on frequency response, with the vertical (dB) resolution of the chart doubled to 5dB per major division. The effects are mostly subtle: a dB or two here and there. Note that my favorite, the 1-notch white filter, has the most bass response. Note also that the bass response has some of the characteristics of Harman curve bass response, with a lift limited to the range below 100Hz rather than the more typical broad rise below about 500Hz. 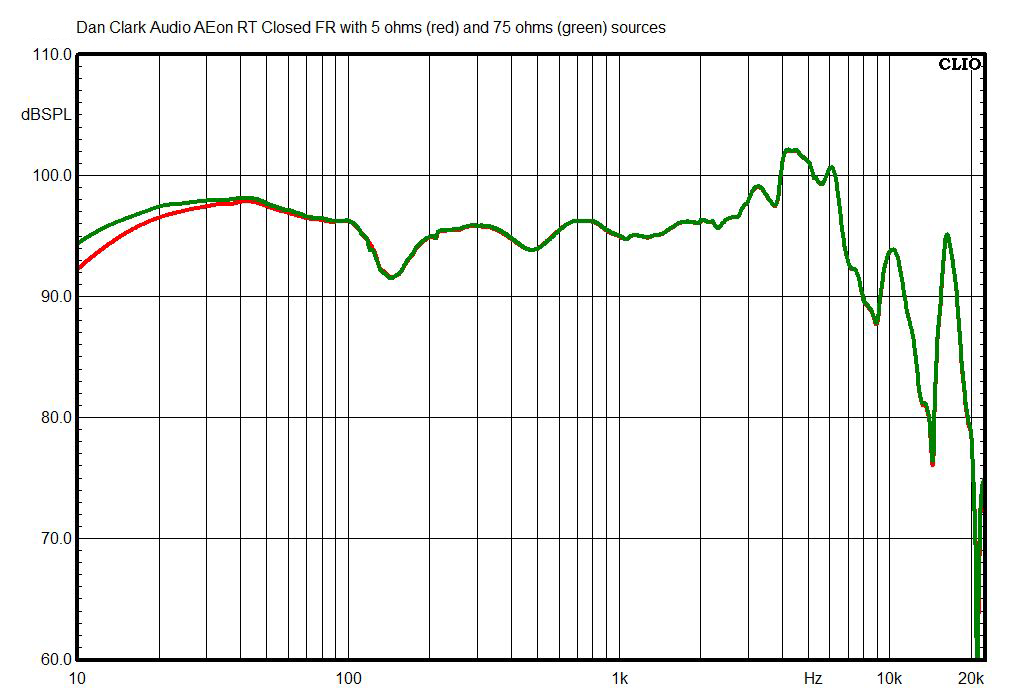 This chart shows how the Æon RT Closeds’ tonal balance changes when they’re used with a high-impedance (75 ohms) source, such as a cheap laptop or some cheap professional headphone amps, or some exotic tube amps. There’s about a 1dB boost in the bass with the high-impedance source at 20Hz, which would not be noticeable. 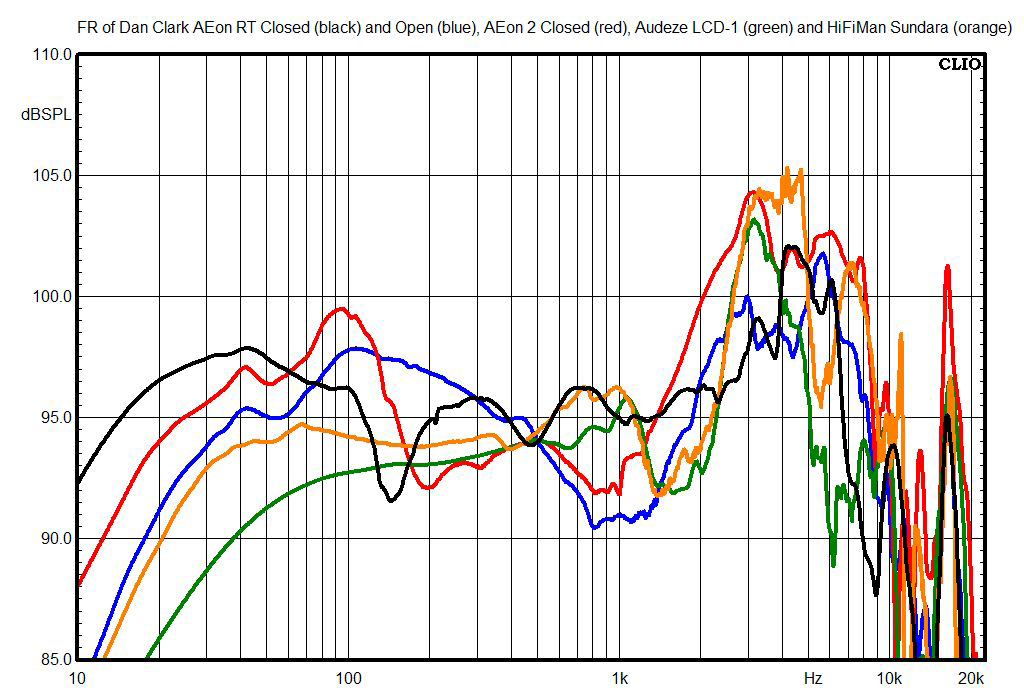 This chart shows the Æon RT Closeds’ right-channel response (with the 1-notch white filter) compared with the Æon RT Opens, the Æon 2 Closeds, and a couple of other audiophile headphones in the mid-three-figures price range. (Once again, resolution on the dB scale is doubled here.) What really stands out with the Æon RT Closed headphones is their stronger bass response, and their much weaker response between 2 and 3kHz. 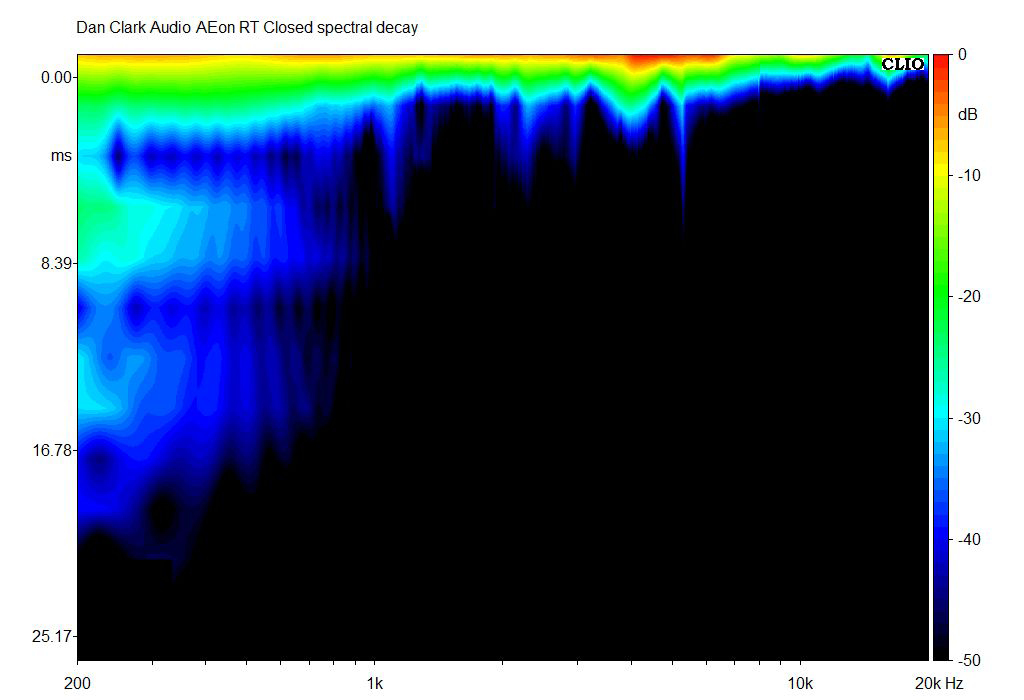 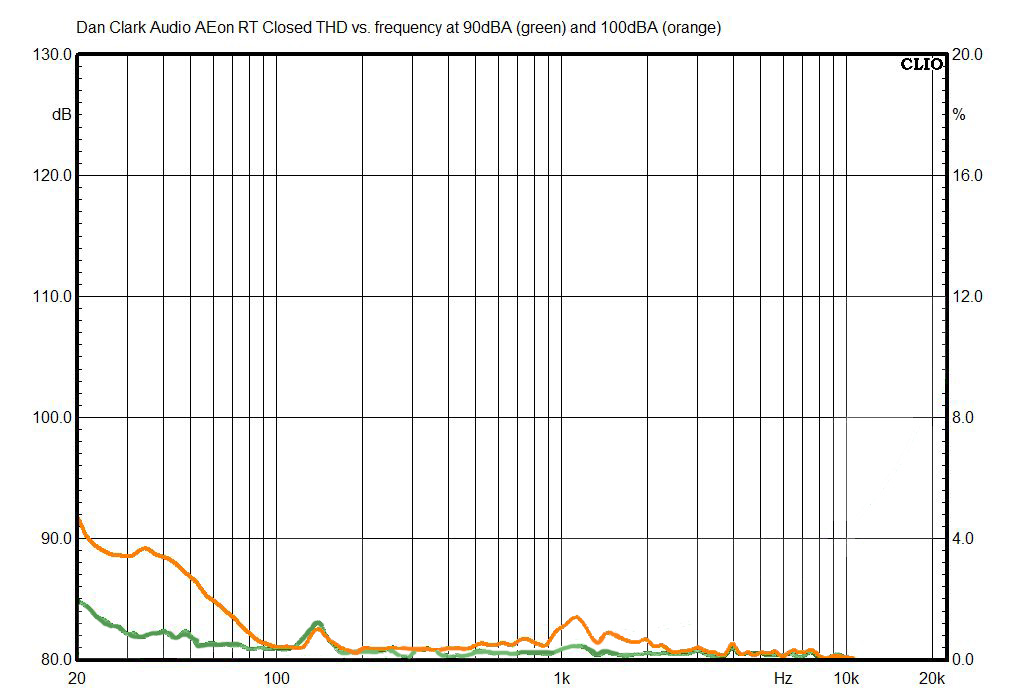 There’s a little bit of visible harmonic distortion in the Æon RT Closeds’ chart, but even at the crazily high level of 100dBA (measured with pink noise), it maxes out at about 4%, and that’s in the bass so it’s unlikely to be audible (the threshold of audibility of bass distortion is typically quoted at around 10%). 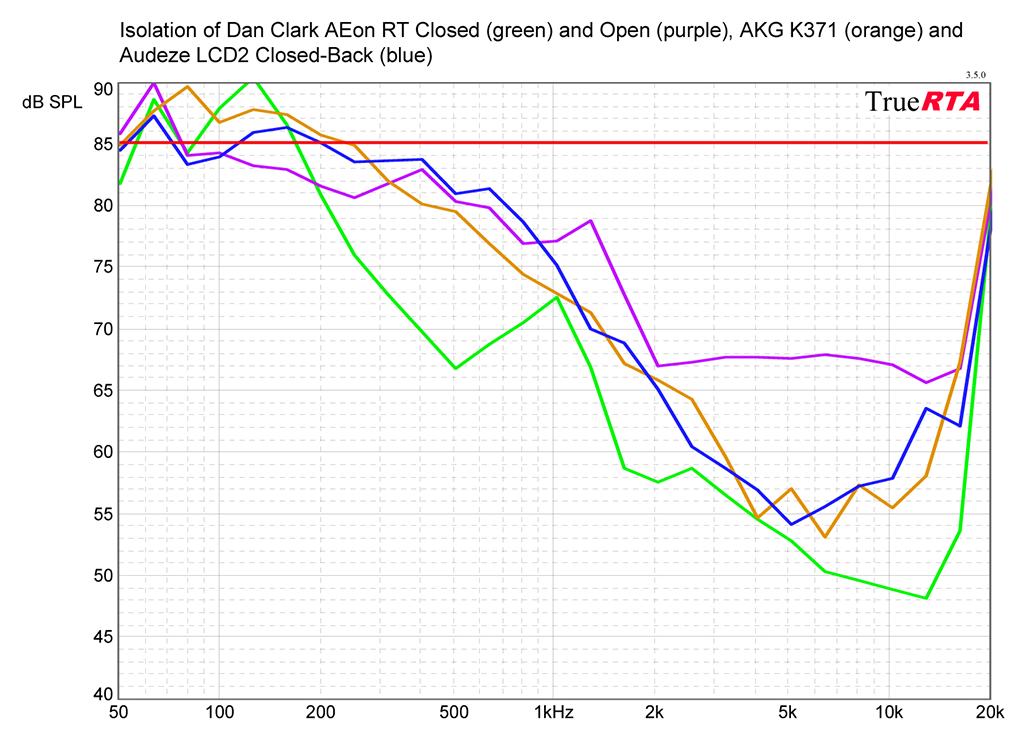 In this chart, the external noise level is 85dB SPL, and numbers below that indicate the degree of attenuation of outside sounds. The lower the lines, the better the isolation. As you can see, the isolation of the Æon RT Closed headphones is above average for closed-back headphones. I also included the Æon RT Open headphones so you can see how they perform on this test. 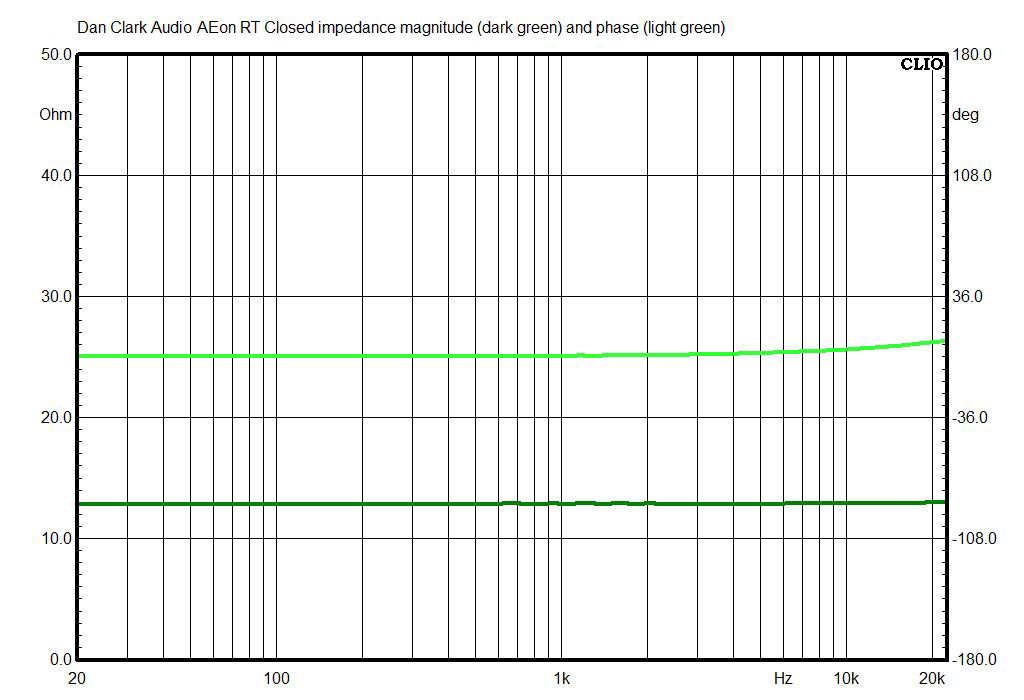 The Æon RT Closeds’ impedance magnitude is dead-flat, right on the rated 12.5 ohms, and the phase is effectively flat.

Sensitivity of the Æon RT Closeds, measured between 300Hz and 3kHz, using a 1mW signal calculated for 12.5 ohms rated impedance, is 85.9dB, which is pretty low, so you’re best off using a decent amp or portable music player with these, rather than a smartphone.