I measured the EAH-AZ70W earphones using laboratory-grade equipment: a G.R.A.S. Model 43AG ear/cheek simulator/RA0402 ear simulator with KB5000/KB5001 simulated pinnae, and a Clio 10 FW audio analyzer. For isolation measurements, I used a laptop computer running TrueRTA software with an M-Audio MobilePre USB audio interface. An Mpow BH259A Bluetooth transmitter was used to send signals from the Clio 10 FW to the earphones. These are “flat” measurements; no diffuse-field or free-field compensation curve was employed. Note that because of the latency introduced by Bluetooth, I wasn’t able to do a spectral decay measurement, and of course my usual impedance and sensitivity measurements are irrelevant for wireless earphones. If you’d like to learn more about what our measurements mean, click here. 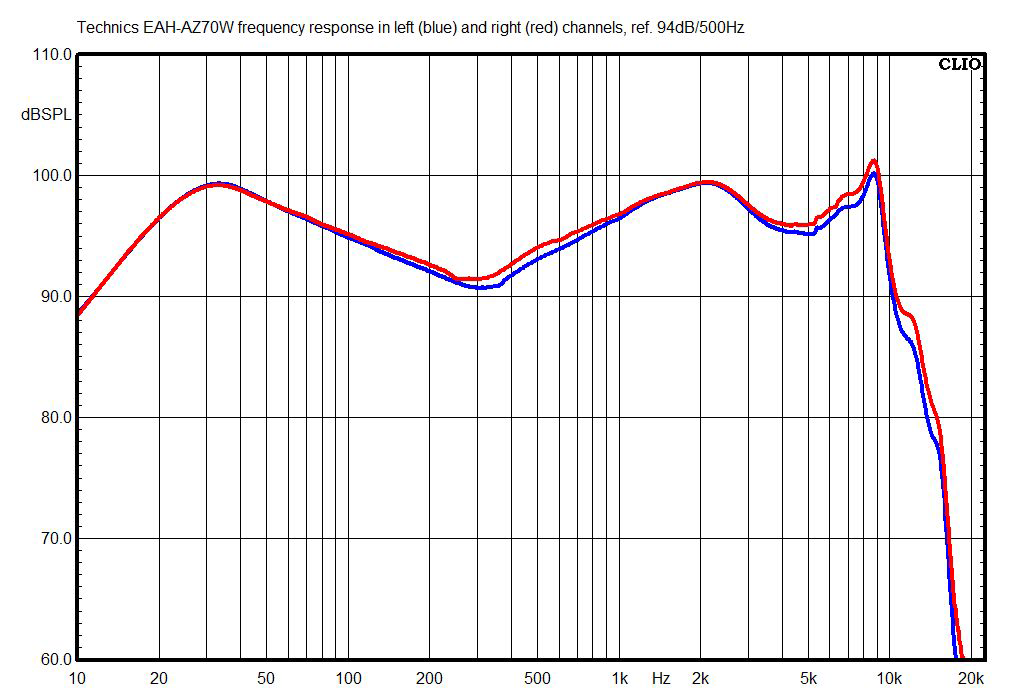 The above chart shows the EAH-AZ70Ws’ frequency response measured with the RA0402 ear simulator, with noise canceling on. This is a somewhat unusual curve, but it’s not crazy-unusual. You can still see the bass bump and roughly 2kHz peak that we see in most good-sounding earphones; what’s unusual is that extra amount of energy between about 600Hz and 1.2kHz, and the peak at roughly 9kHz, rather than the more common 6 or 7kHz. So these earphones are likely to sound tonally balanced, but with some mild colorations in the midrange.

The impulse response shows that the latency with the Mpow BH259A is 283ms. This is fairly standard for true wireless earphones (few of which have aptX Low Latency or aptX Adaptive), and it means you may see lip-sync errors when you watch videos. It’s probably safest to use these for music and podcasts if lip-sync errors annoy you greatly. 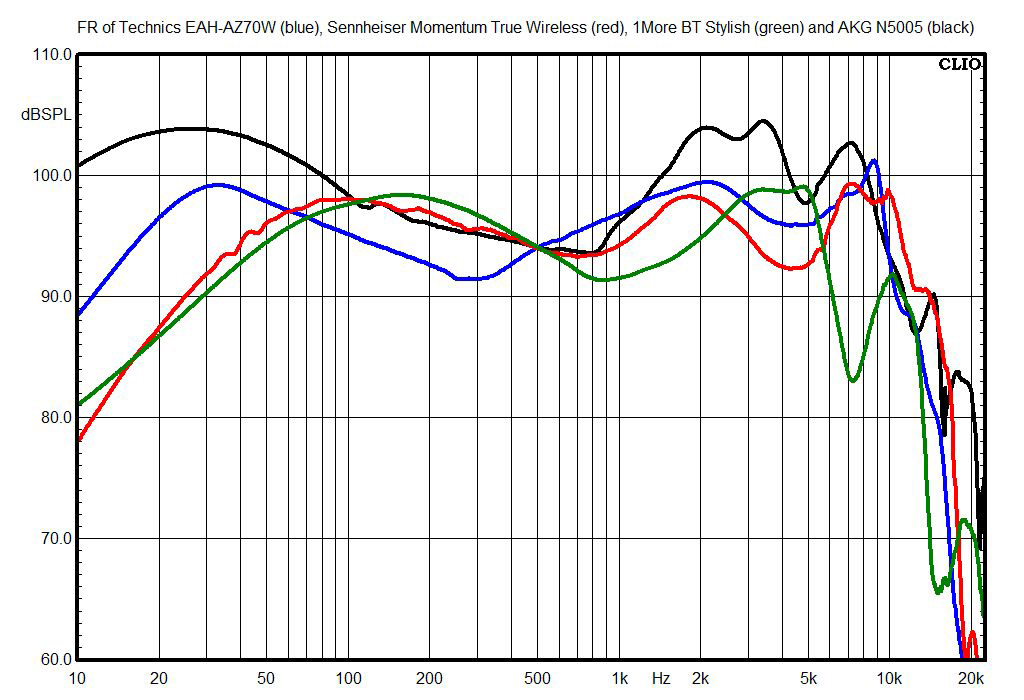 This chart shows the EAH-AZ70Ws’ right-channel response compared with other true wireless earphones (Sennheiser Momentum True Wirelesses and 1More E1026BT-I Stylishes), as well as with the AKG N5005s, the earphones said to best reflect the Harman curve. The EAH-AZ70Ws’ response might be considered a cubist interpretation of the Harman curve; unusual as its angular trace looks, it’s more in keeping with audio norms than most true wireless earphones are. 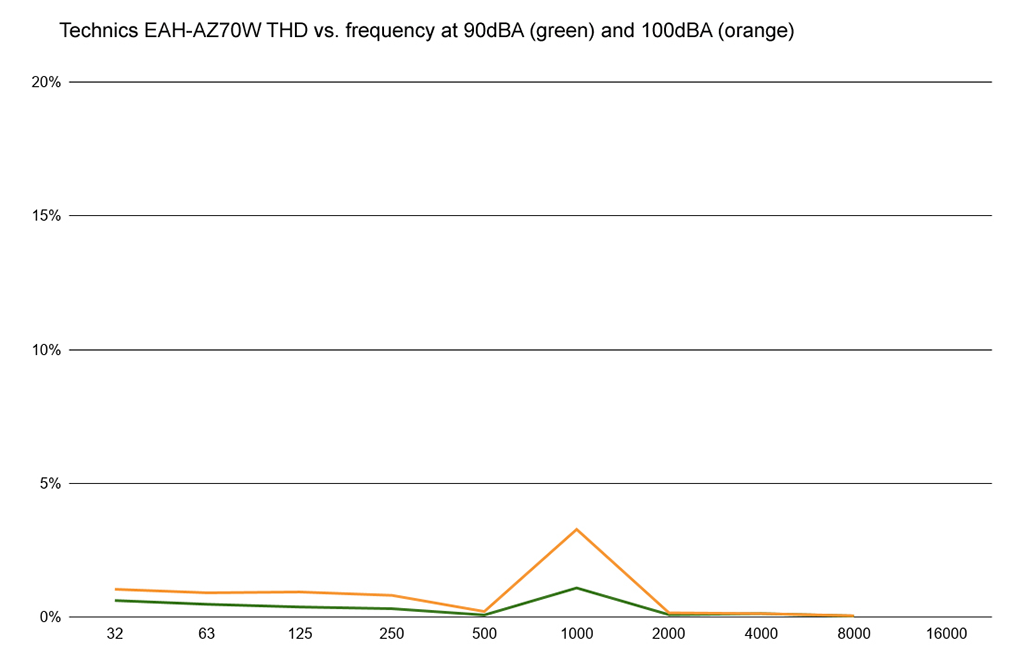 Because of the latency of the Bluetooth connection, I could not use Clio’s sine sweep function to measure total harmonic distortion (THD) versus frequency, so I did discrete THD measurements of sine tones in one-octave steps. Distortion is low at most frequencies and levels, except for an unusual peak at 1kHz, which reaches about 3.2% THD at 100dBA (measured with pink noise). This could be marginally audible, but it’s at such a loud level that your ears would probably be hurting anyway. 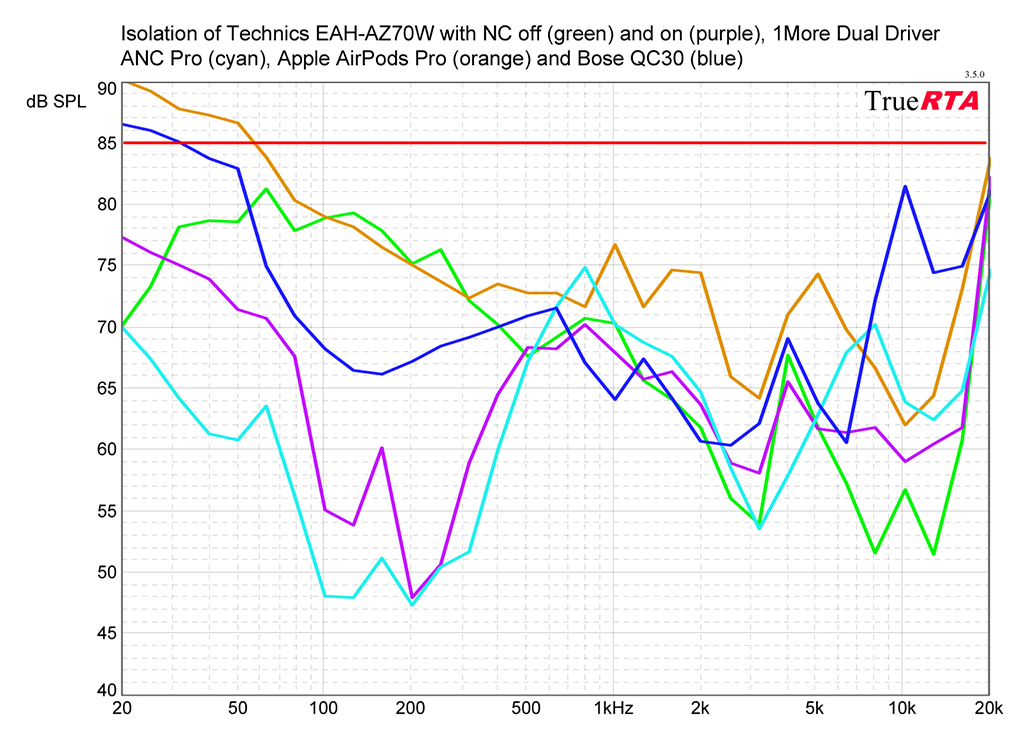 This chart shows the EAH-AZ70Ws’ isolation versus three other earphones with active noise canceling: the Apple AirPods Pros, 1More Dual Driver ANC Pros, and Bose QC30s. (The Apple model is a true wireless design, while the 1More and Bose models are neckband-style Bluetooth earphones.) The EAH-AZ70Ws have the best noise canceling I’ve measured in a true wireless design. The 1More Dual Driver ANC Pros beat them by about 5dB below 150Hz, and the Bose QC20 wired noise-canceling earphones (not shown) roughly equal the performance of the EAH-AZ70Ws, but otherwise, the Technics model blows all other earphones I’ve measured out of the water on this test -- especially in the band between 100 and 300Hz, which is where the low thrumming sound of engine noise inside a jet airliner cabin resides.