I measured the Earsonic Purple earphones using laboratory-grade equipment: a G.R.A.S. Model 43AG ear/cheek simulator/RA0402 ear simulator with KB5000/KB5001 simulated pinnae, and a Clio 10 FW audio analyzer. For isolation measurements, I used a laptop computer running TrueRTA software with an M-Audio MobilePre USB audio interface. The headphones were amplified using a Musical Fidelity V-CAN. These are “flat” measurements; no diffuse-field or free-field compensation curve was employed. If you’d like to learn more about what our measurements mean, click here. 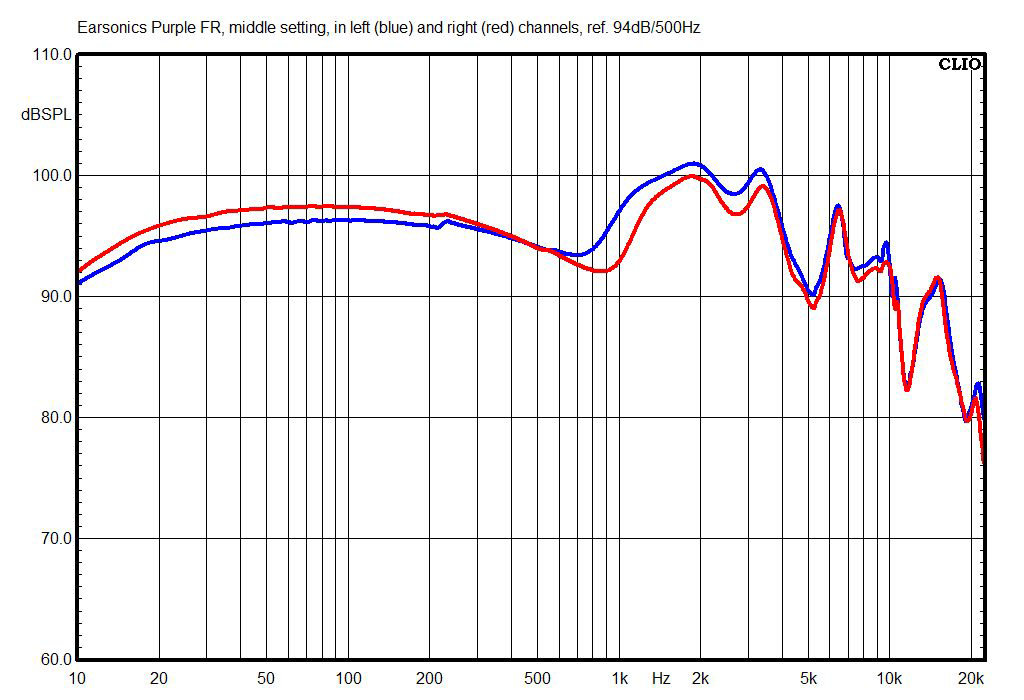 The above chart shows the Purples’ frequency response with the tone controls set visually to the middle position -- i.e., the best approximation of the middle setting that one could achieve by eye, which is how consumers without measurement gear will have to make their settings. This is pretty standard stuff for audiophile earphones. The only thing that’s a tad off from the norm is a little excess midrange energy around 1kHz, and a little less bass than is typical, relative to the treble. You may also notice some mismatch between left and right channels in the midrange. I wondered if this was due to my settings of the tone controls not matching, as potentiometers -- especially tiny trim pots -- are not precision devices. So I did some more measurements . . . 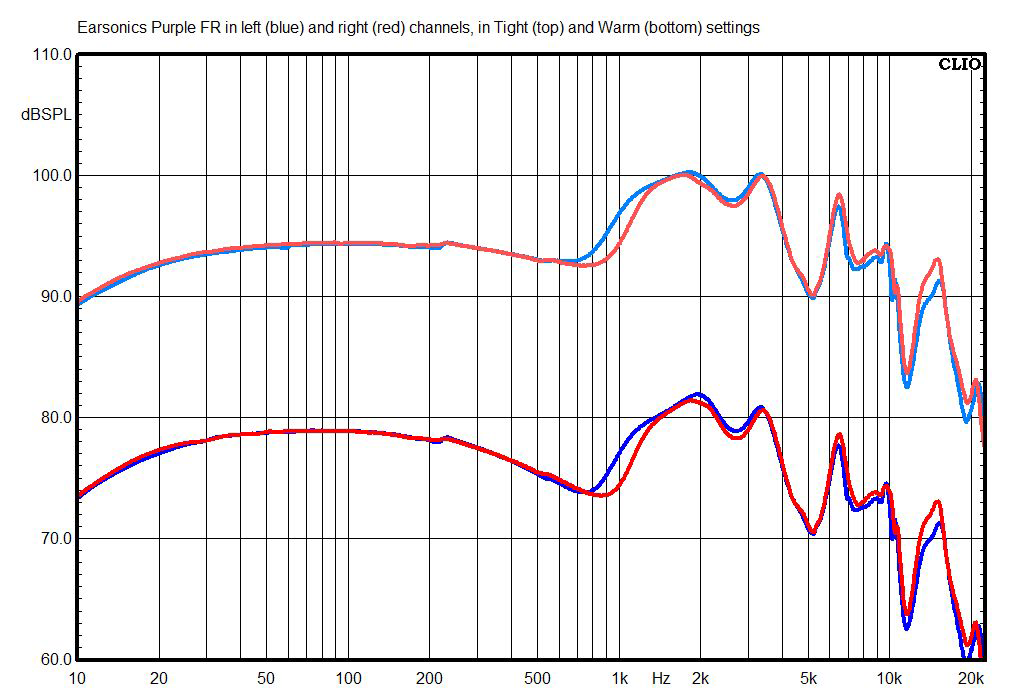 . . . with the controls set all the way to either extreme, i.e., Tight or Warm. (In the above chart, I scaled the results in Warm mode down by 20dB to fit them on the chart.) This eliminated the imprecision of the visual match, and showed that there does seem to be some inconsistency between left and right, at least on this sample, with the left having about 2.5dB more energy between 800 and 1200Hz. I didn’t notice this in my listening, though. 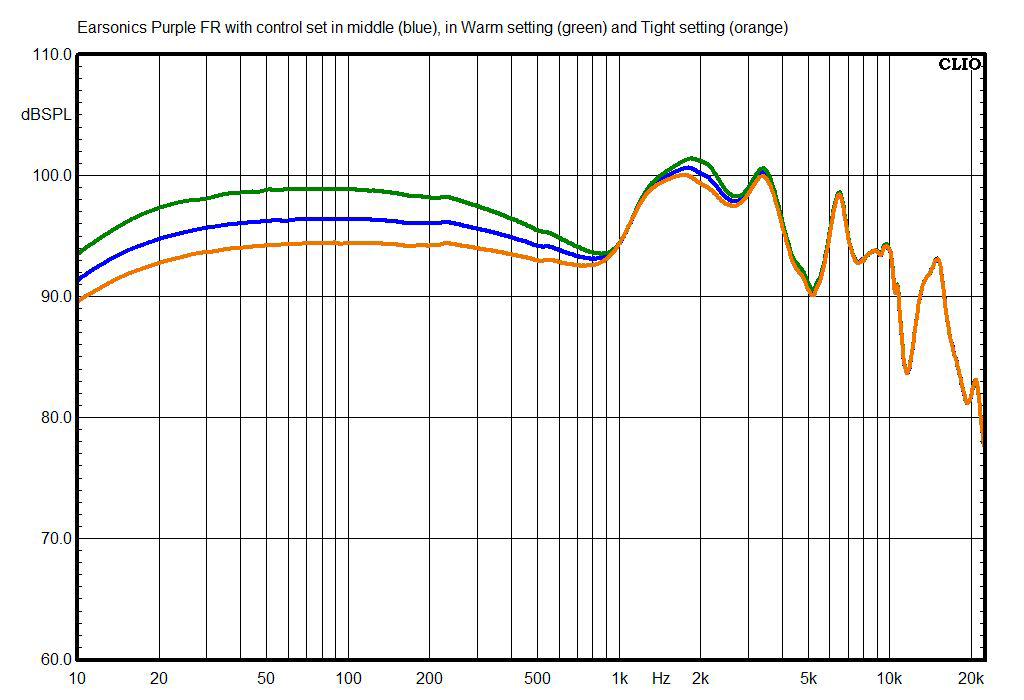 Here you can see the effects of the tone control. It appears to function as a level control for the bass driver, with a range of ±2dB. 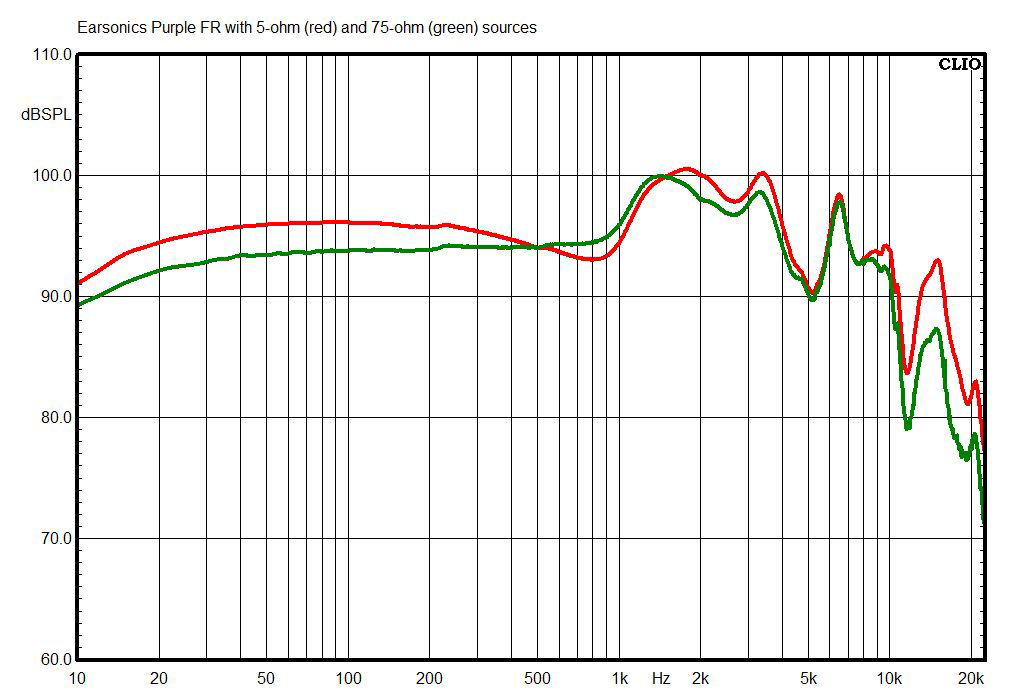 This chart shows how the Purples’ tonal balance (with the tone controls set to the middle position) changes when they’re used with a high-impedance (75 ohms) source, such as a cheap laptop or some cheap professional headphone amps, or some tube amps. It’s a big difference, as expected with earphones using balanced armatures, but at least if the Purples are used with a high-impedance source, the tone controls can probably restore some of the original balance. 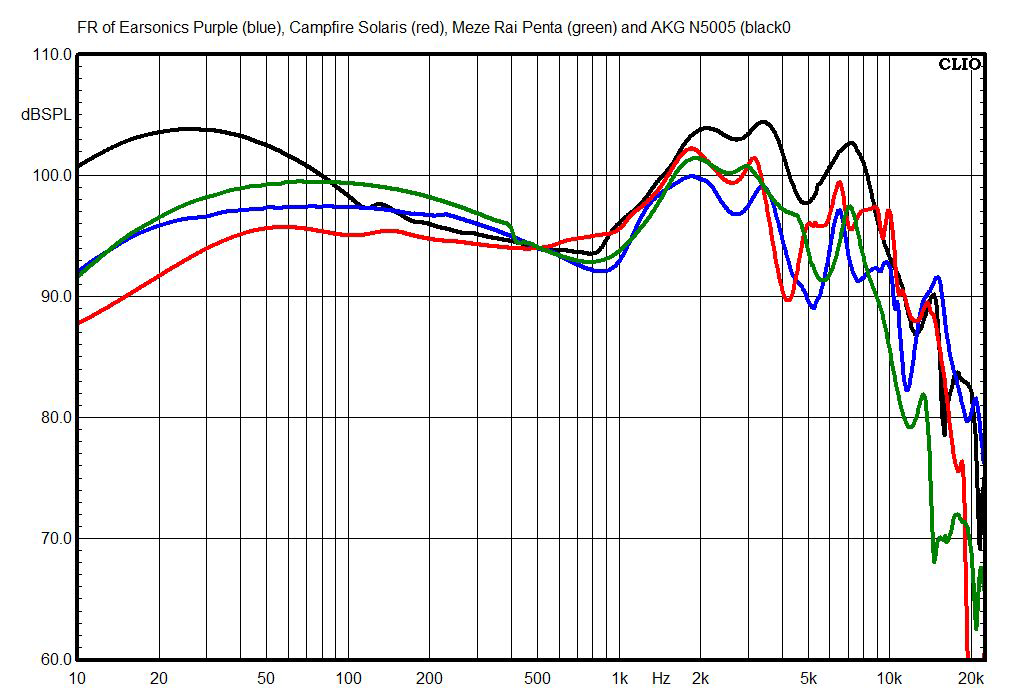 This chart shows the EarSonics Purples’ response (with the tone control set in the middle, right channel) compared with three other multi-driver, high-end earphones: the Meze Rai Pentas, and Campfire Solarises, and the AKG N5005s, which are said to be the passive earphones that (with their Reference filter installed) best conform to the Harman curve. It’s interesting to see how the Purples, the Rai Pentas, and the Solarises are all basically “different flavors of the same thing” -- they have similar response curves, but different balances of bass versus treble. The N5005s are different, with the large, under-100Hz bass bump characteristic of Harman-curve models, and a lot more treble energy -- or, depending on how you look at it, less midrange than the other models. 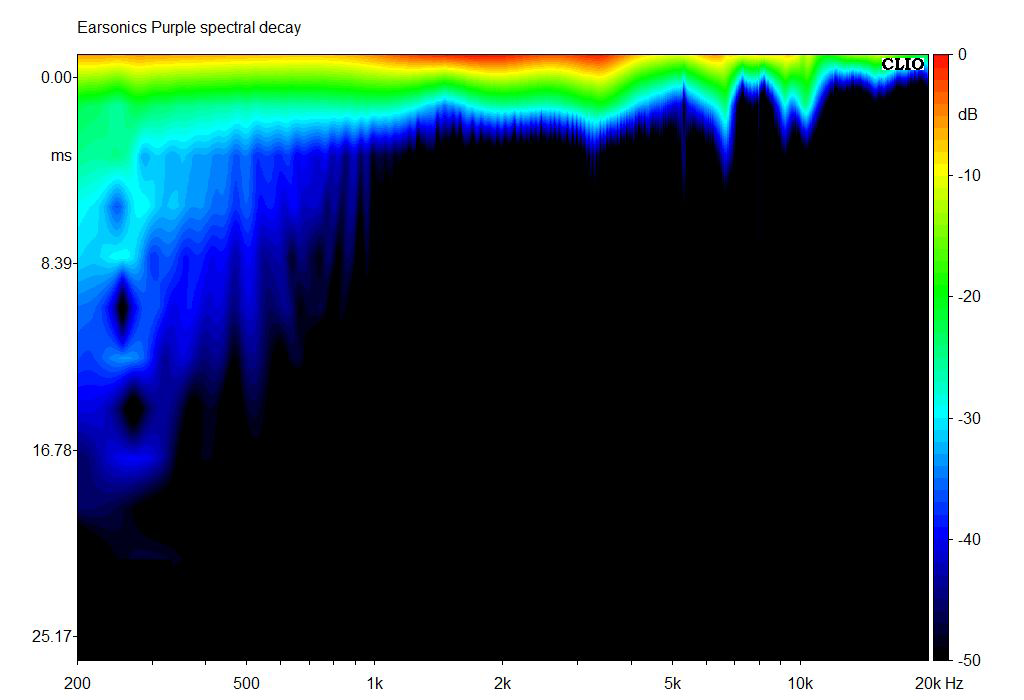 The Purple earphones’ spectral decay plot (measured with the tone controls in the middle position) looks very clean, suggesting there are no troublesome resonances. 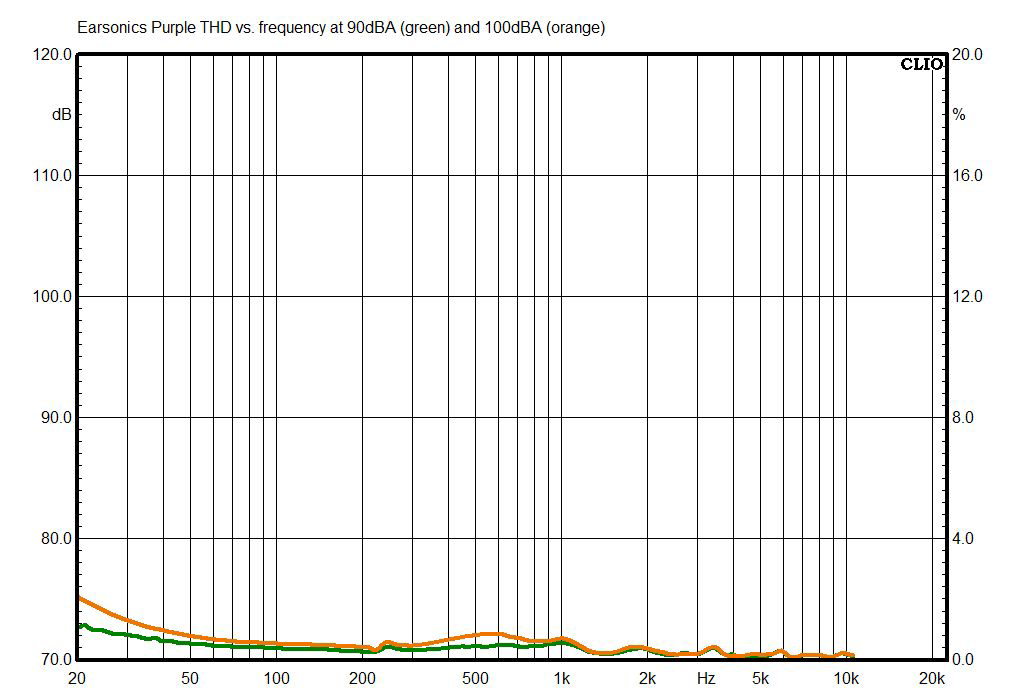 The distortion of the Purples (shown with the tone controls in the middle position) is very low, especially for a set of earphones relying entirely on balanced-armature drivers. 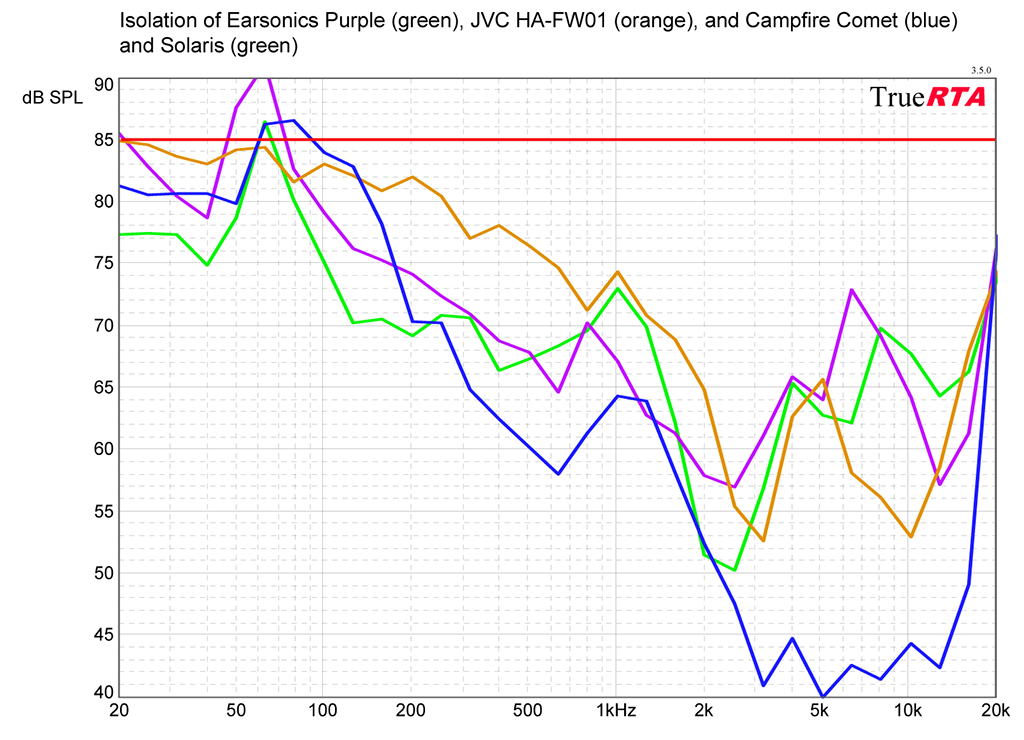 In this chart, the external noise level is 85dB SPL, and numbers below that indicate the degree of attenuation of outside sounds. The lower the lines, the better the isolation. You can see that the Purples, like most earphones using over-ear cable routing (including the Campfire Solaris eaphones, also shown) deliver excellent isolation -- although occasionally a small model with conventional cable routing (like the Campfire Comets, also shown) can deliver an even better result. 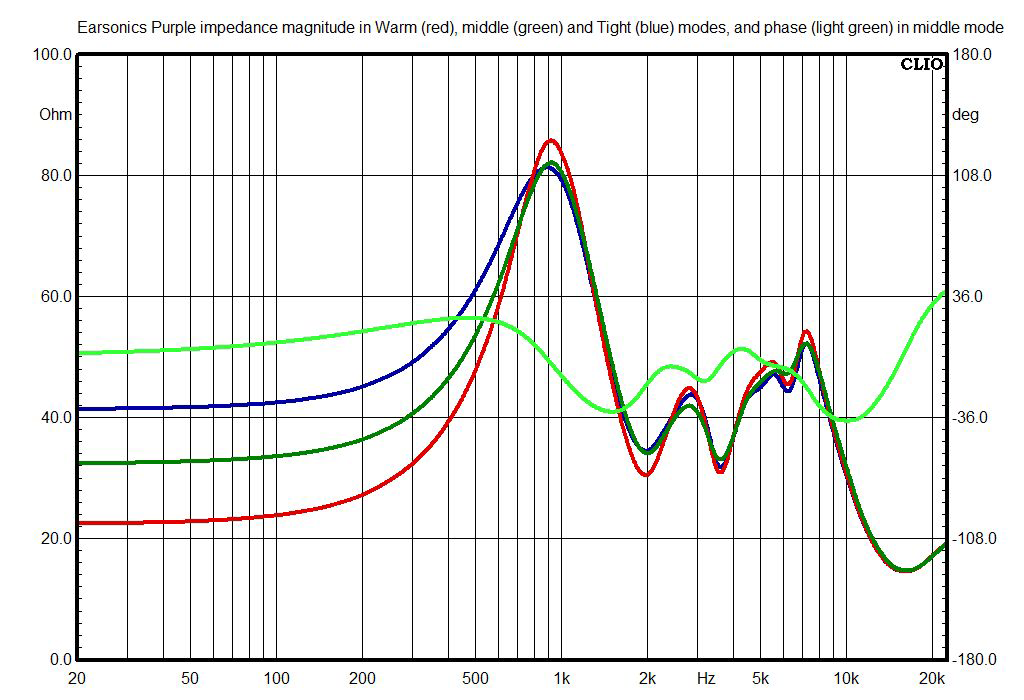 No matter how the tone controls are set, the Purples have a huge impedance swing centered at about 900Hz, which is the reason the tonal balance is somewhat sensitive to the source impedance. The tone controls have little effect on impedance at higher frequencies, but they swing the impedance of the bass driver between 22 and 41 ohms.

Sensitivity of the Purple earphones, measured between 300Hz and 3kHz, using a 1mW signal calculated for 32 ohms impedance (my default, and roughly in the middle of the bass impedance range), with the tone controls in the middle setting, is 119.4dB -- far below the rated sensitivity of 127dB, but still no problem for any source device to drive.