I measured the TMA-2 HD Wireless headphones using laboratory-grade equipment: a G.R.A.S. Model 43AG ear/cheek simulator/RA0402 ear simulator with KB5000/KB5001 simulated pinnae, and a Clio 10 FW audio analyzer. For isolation measurements, I used a laptop computer running TrueRTA software with an M-Audio MobilePre USB audio interface. The headphones were amplified using a Musical Fidelity V-CAN. These are “flat” measurements; no diffuse-field or free-field compensation curve was employed. If you’d like to learn more about what our measurements mean, click here. 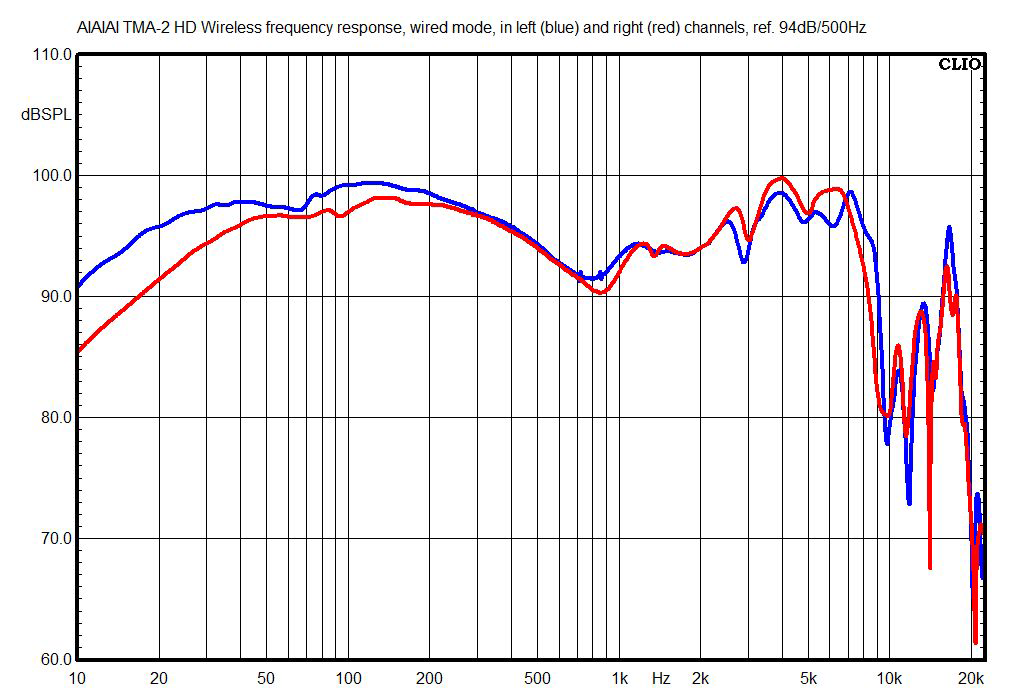 The above chart shows the TMA-2 HD Wirelesses’ frequency response with a wired connection. This curve is unusual in that the usual peak centered somewhere between 2kHz and 3kHz has moved up to span the octave from 4kHz to 8kHz, and also the entire treble range is a little low relative to the midrange and bass. There’s also a little extra energy in the upper bass and lower mids, although that’s fairly common. 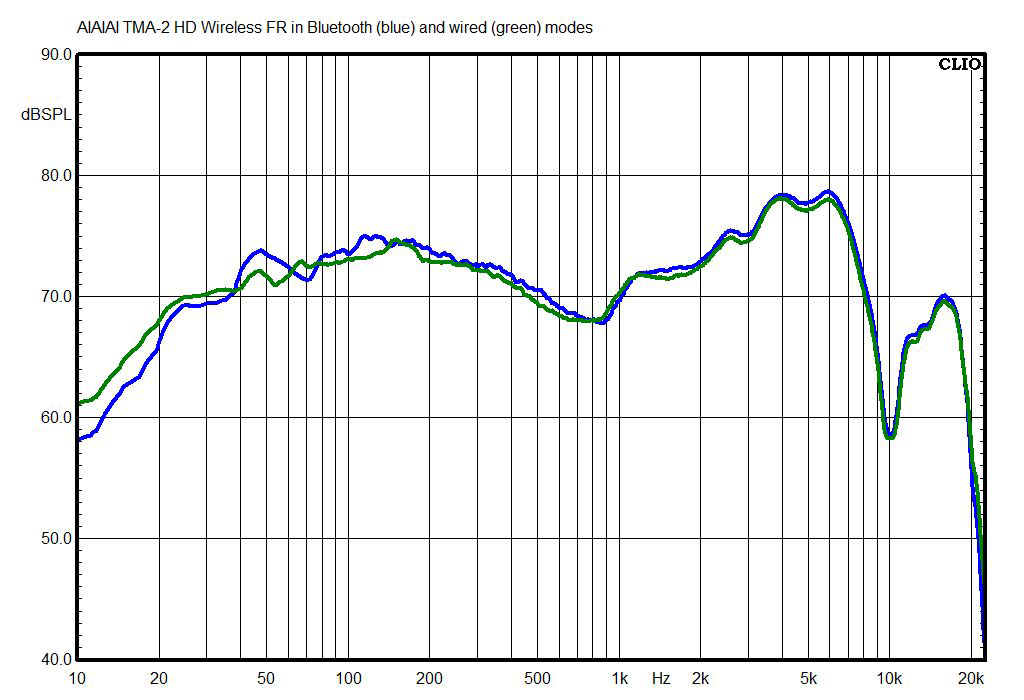 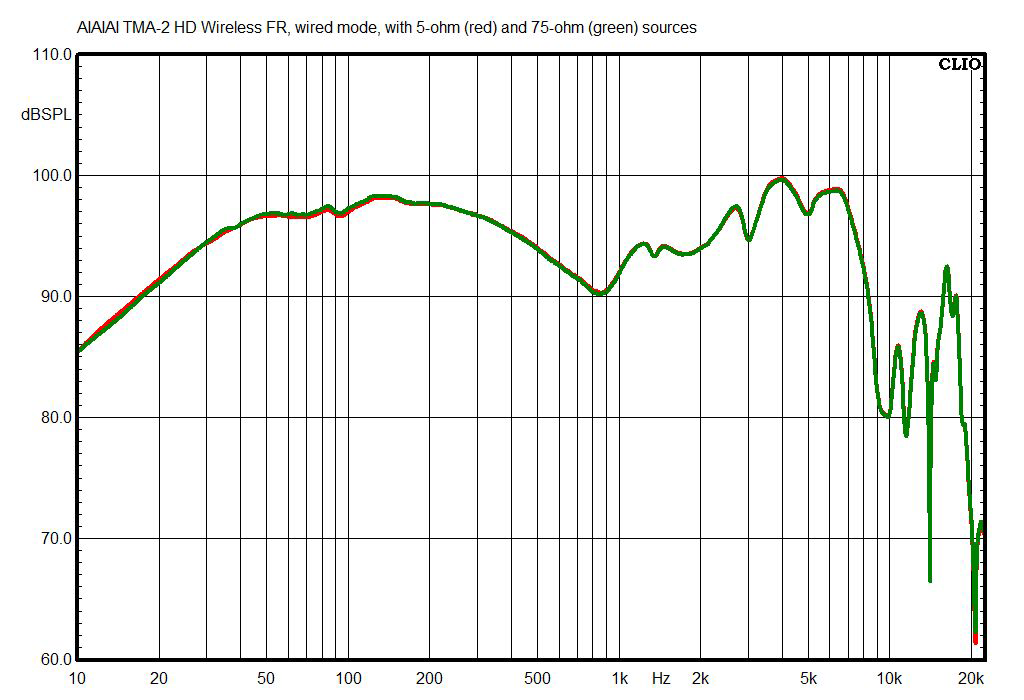 This chart shows how the TMA-2 HD Wirelesses’ tonal balance changes when they’re used with a high-impedance (75 ohms) source, such as a cheap laptop or some cheap professional headphone amps, or some exotic tube amps. There’s no significant difference in response. 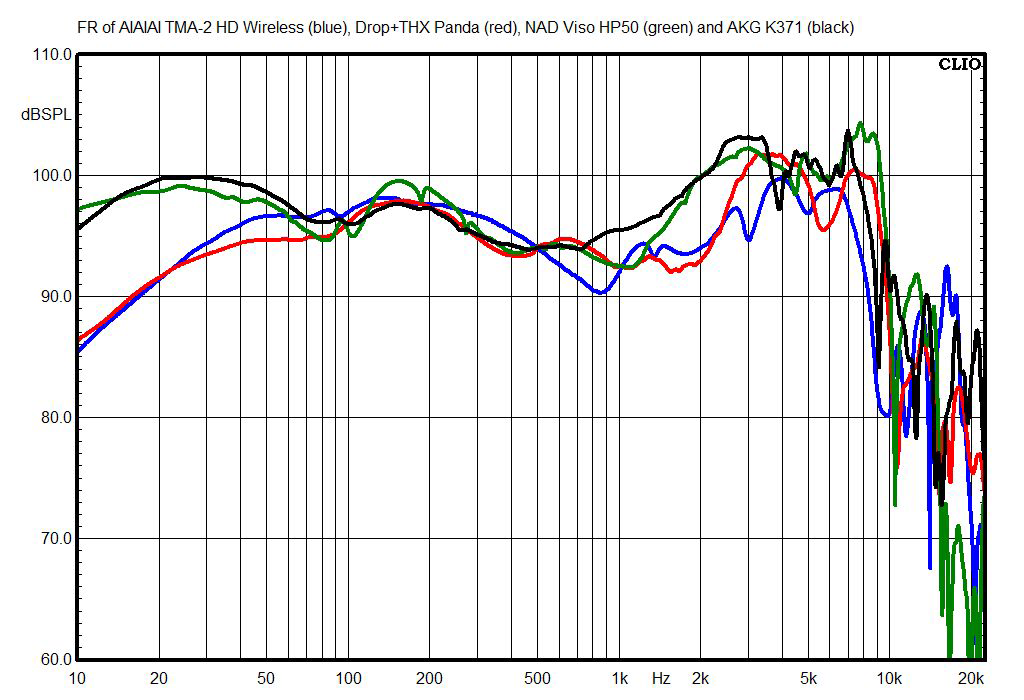 This chart shows the TMA-2 HD Wireless headphones’ right-channel response in wired mode compared with several closed-back headphones, including the AKG K371s, which are the headphones said to come closest to the Harman curve. The TMA-2 HD Wirelesses look a lot like the Drop + THX Panda headphones; they have the same unusual lack of energy at 2kHz, although they have a little less overall treble output. The peak around 150Hz makes them a little heavy in the upper bass. 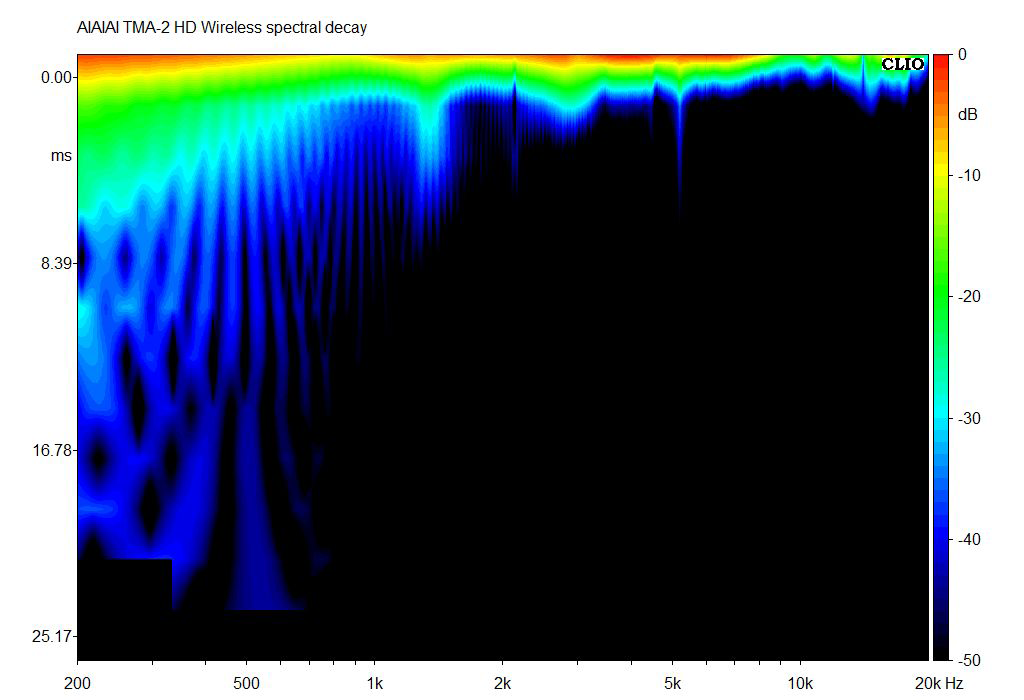 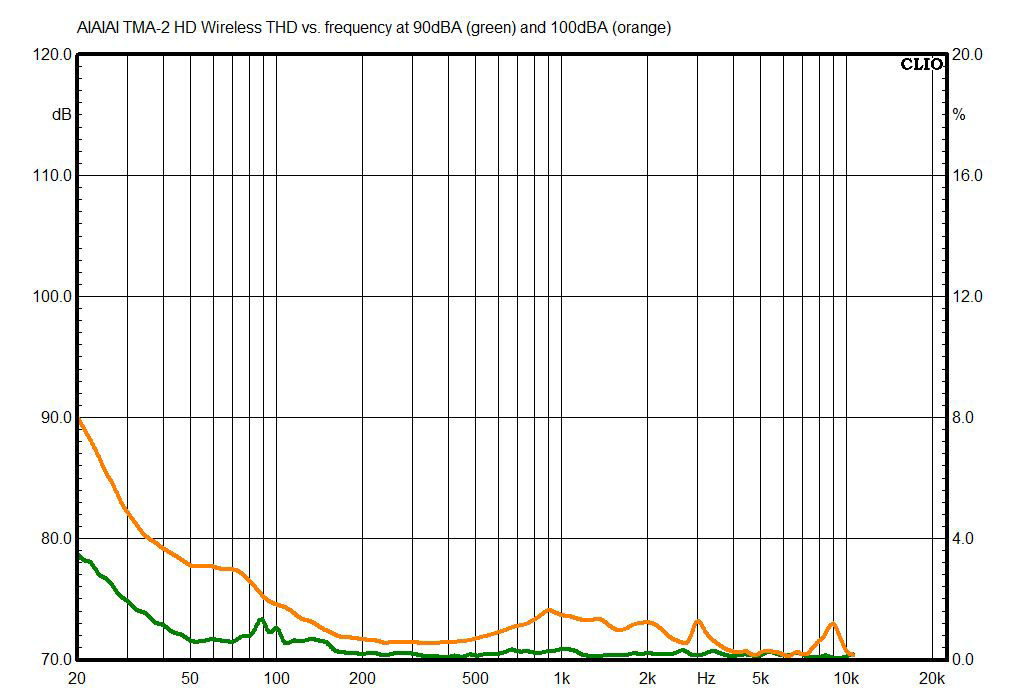 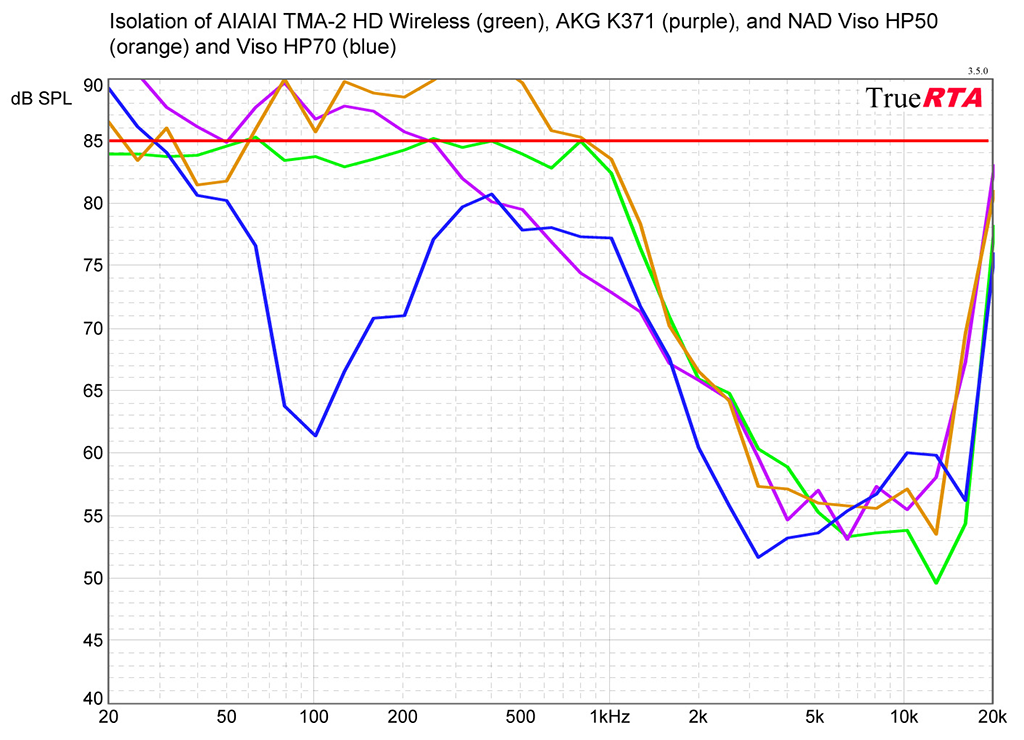 In this chart, the external noise level is 85dB SPL, and numbers below that indicate the degree of attenuation of outside sounds. The lower the lines, the better the isolation. The isolation of the TMA-2 HD Wirelesses is comparable to that of competing open-back models. I added the NAD Viso HP70s so you could see how a typical noise-canceling model performs on this test. 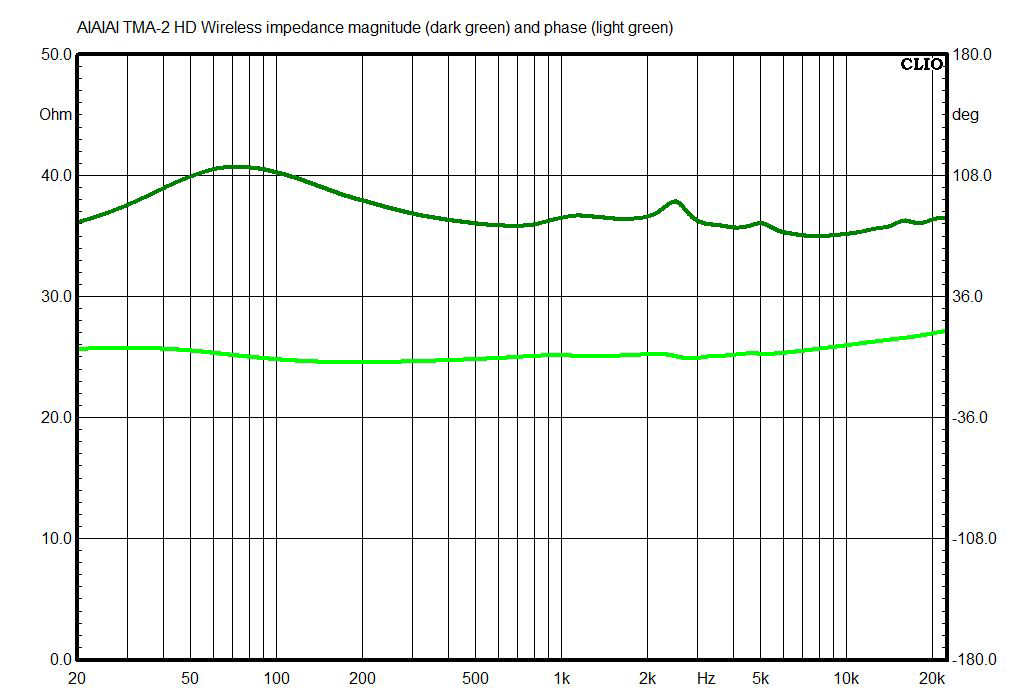 The TMA-2 HD Wirelesses’ impedance magnitude is fairly flat, running between 36 and 42 ohms with a resonant peak at 75Hz, and the phase is just about dead-flat.