I measured the HiFiMan Deva headphones using laboratory-grade equipment: a G.R.A.S. Model 43AG ear/cheek simulator/RA0402 ear simulator with KB5000/KB5001 simulated pinnae, and a Clio 10 FW audio analyzer. For isolation measurements, I used a laptop computer running TrueRTA software with an M-Audio MobilePre USB audio interface. The headphones were amplified using a Musical Fidelity V-CAN. These are “flat” measurements; no diffuse-field or free-field compensation curve was employed. If you’d like to learn more about what our measurements mean, click here. 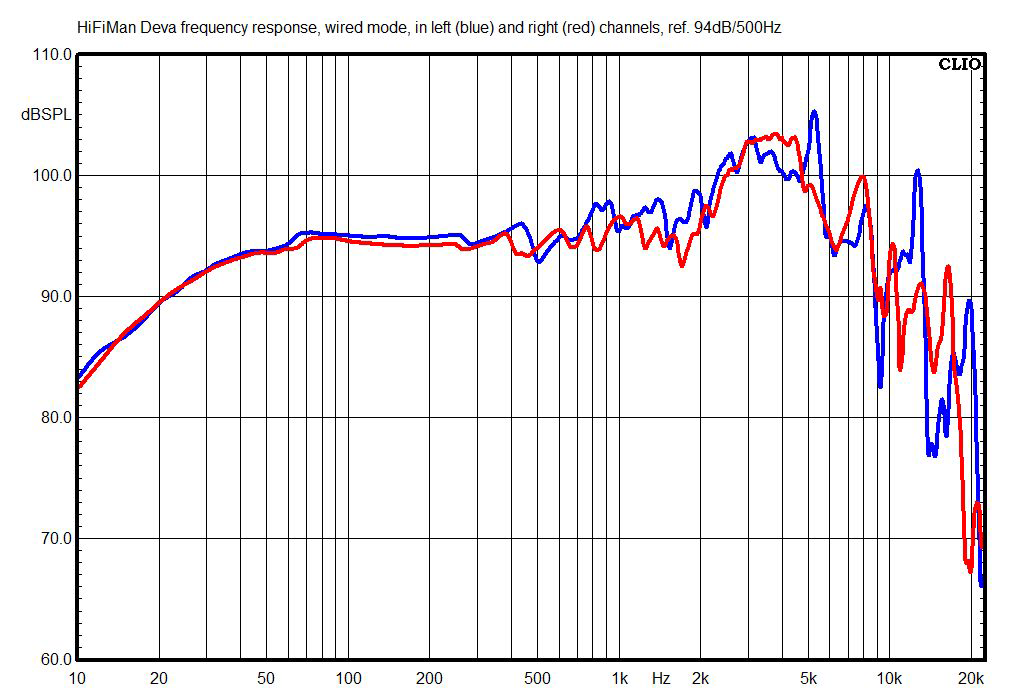 The above chart shows the Devas’ frequency response with a wired connection. This curve is very typical for open-back planar-magnetic headphones, with essentially flat response from 50Hz to 1.8kHz, and an octave-wide peak centered at about 3.6kHz. 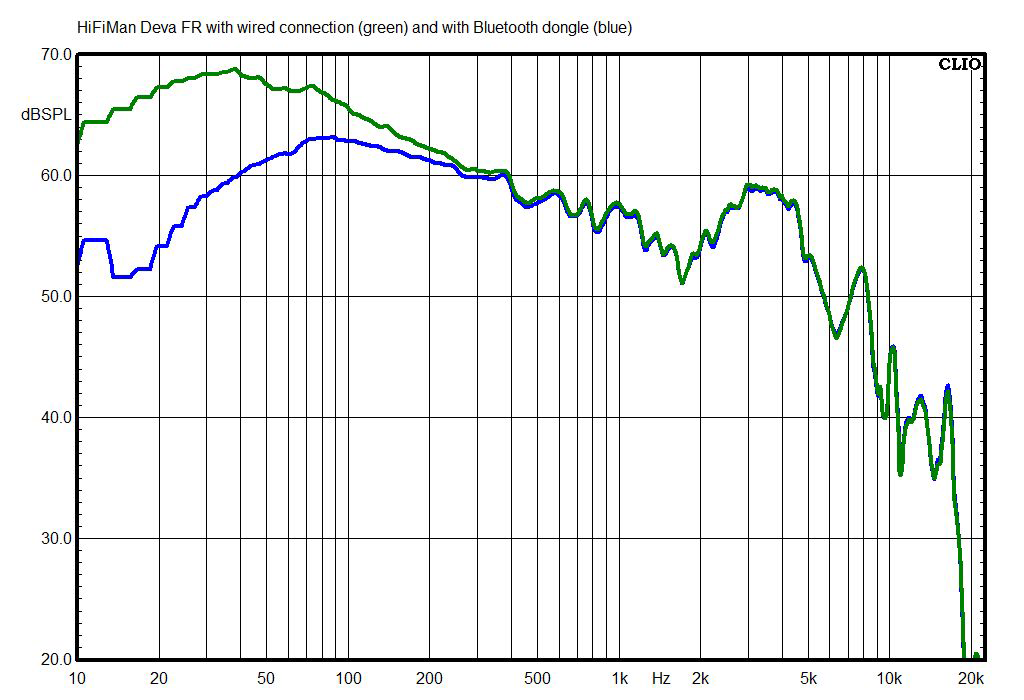 This measurement shows the difference in frequency response between a wired connection and using the Bluemini. (I used pink noise and the Clio’s real-time analyzer function for this measurement, which is why it shows a -3dB/octave low-pass function.) The Bluemini seems to have two-pole high-pass filtering, starting at about -1.5dB/octave below 300Hz, and increasing to about -8dB/octave below 70Hz. Note that this is not a function of Bluetooth; it seems to be intentional tuning performed in the Bluemini’s DSP. I noticed this first using time-windowed log chirp tones, and confirmed it with the pink noise measurements. So the Deva headphones should sound brighter with the Bluemini. 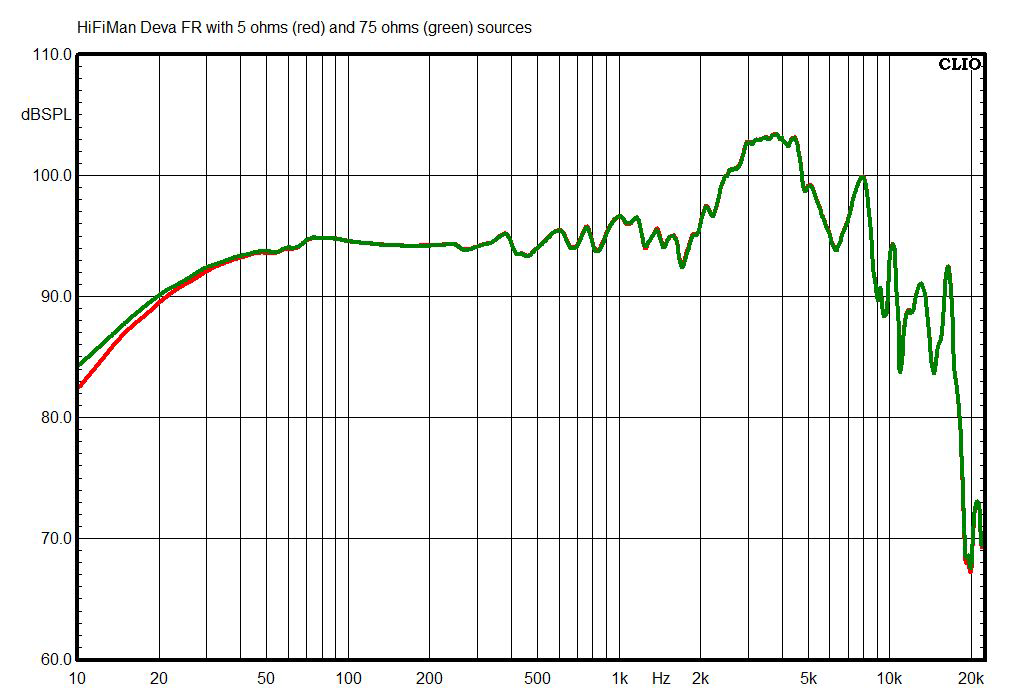 This chart shows how the Devas’ tonal balance changes when they’re used with a high-impedance (75 ohms) source, such as a cheap laptop or some cheap professional headphone amps, or some exotic tube amps. There’s a tiny, probably imperceptible boost of about 1dB at 20Hz with the high-impedance source. 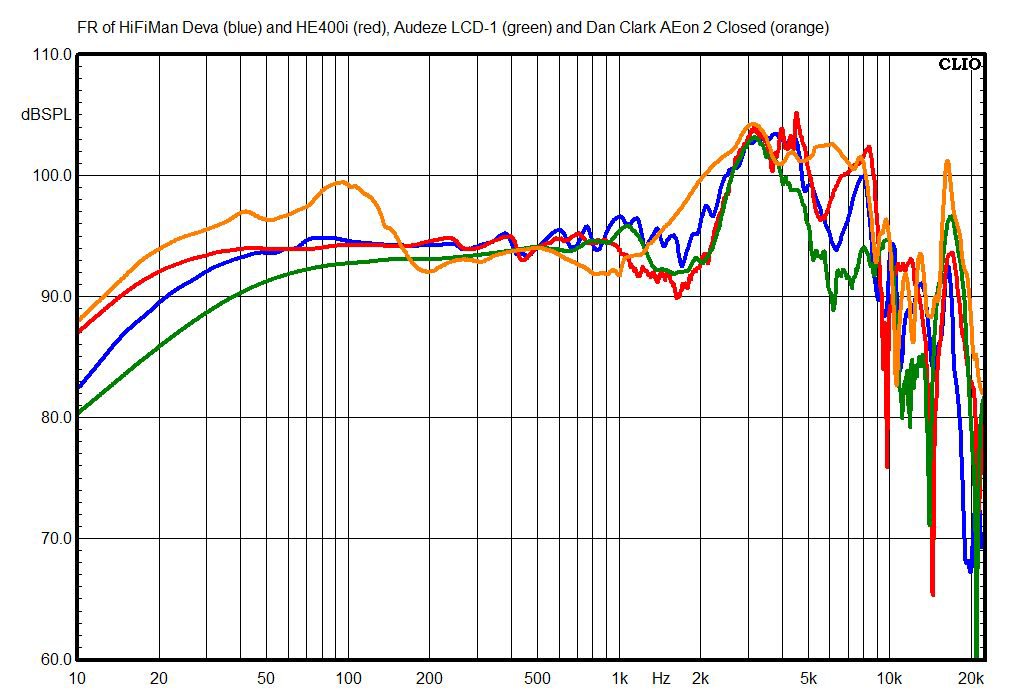 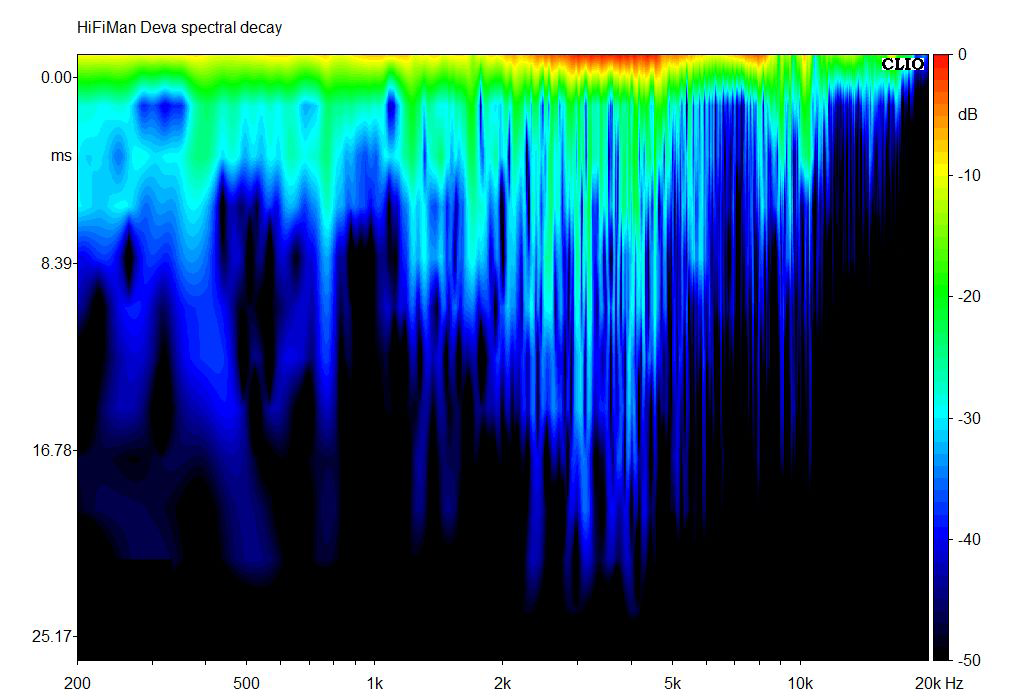 The Deva headphones’ spectral decay plot looks typical for planar-magnetic headphones, with lots of very high-Q resonances between about 1 and 5kHz. I’m told these are comb-filter effects caused by reflections between the large, flat planar driver and the flat surface of the ear/cheek simulator. However, the Devas have even less bass resonance than I’m used to seeing from planars, which suggests they’ll have nice, tight-sounding bass. 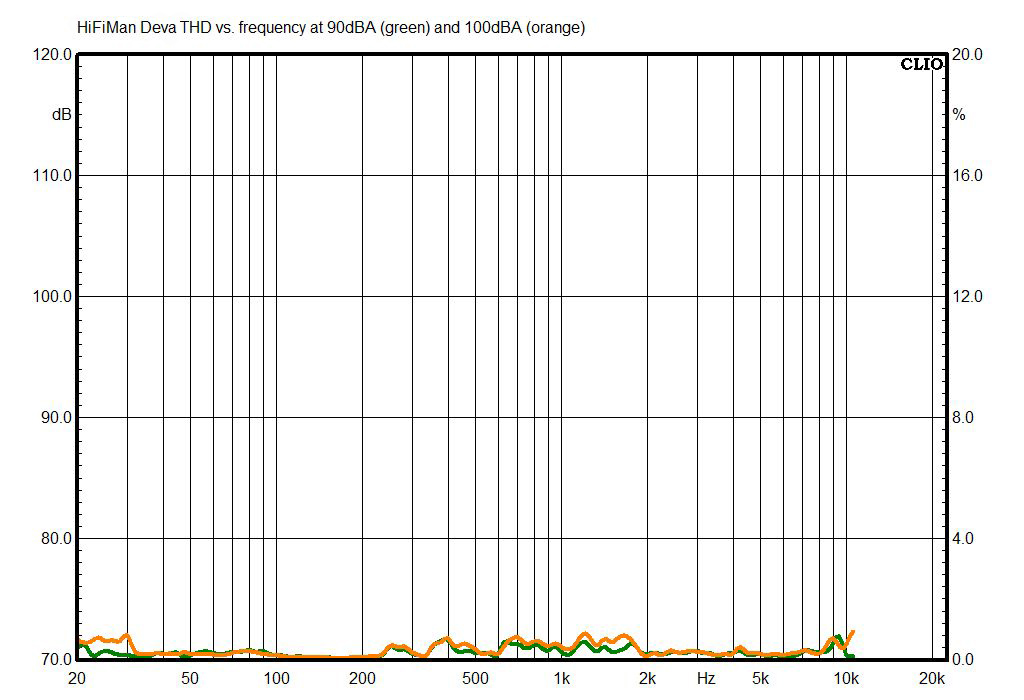 As is usually the case with planar-magnetic headphones, the distortion of the Devas is nearly non-existent even at extremely loud listening levels. 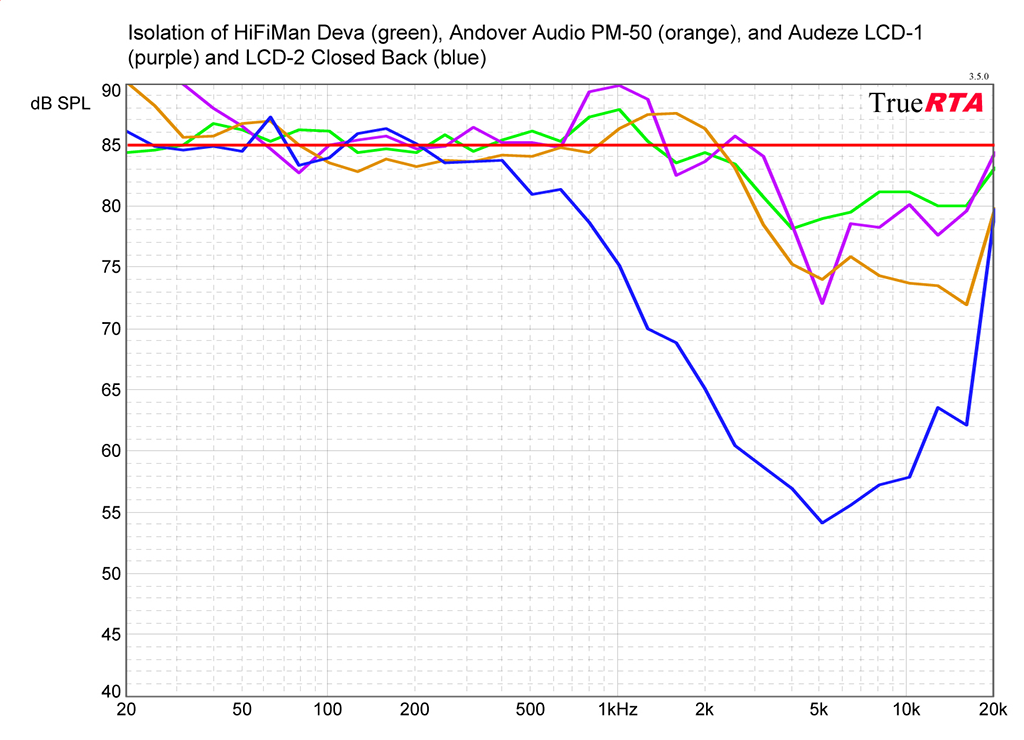 In this chart, the external noise level is 85dB SPL, and numbers below that indicate the degree of attenuation of outside sounds. The lower the lines, the better the isolation. The isolation of the Devas is comparable to that of competing open-back models. I added the Audeze LCD-2 Closed Backs so you could see how a planar-magnetic closed-back model performs on this test. 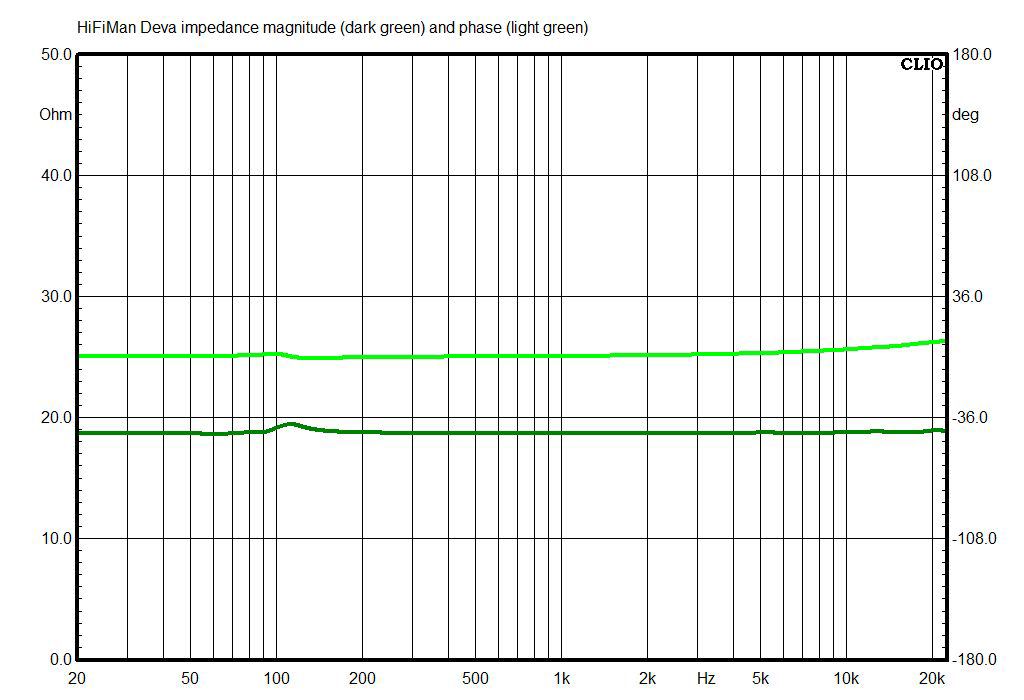 Like most of the planar-magnetic headphones I measure, the Devas’ impedance magnitude and phase are just about dead-flat; it’s about 18.8 ohms across the audioband.

Sensitivity of the Deva headphones, measured between 300Hz and 3kHz, using a 1mW signal calculated for 18 ohms rated impedance, is 88.6dB, which means you won’t get loud volumes when driving them directly with a smartphone.