I measured the Æon 2 Closed headphones using laboratory-grade equipment: a G.R.A.S. Model 43AG ear/cheek simulator/RA0402 ear simulator with KB5000/KB5001 simulated pinnae, and a Clio 10 FW audio analyzer. For isolation measurements, I used a laptop computer running TrueRTA software with an M-Audio MobilePre USB audio interface. The headphones were amplified using a Musical Fidelity V-CAN, with an Audio-gd NFB1-AMP used for distortion measurements. Except as noted, the measurements were made with the stock earpads and no filter. These are “flat” measurements; no diffuse-field or free-field compensation curve was employed. If you’d like to learn more about what our measurements mean, click here. 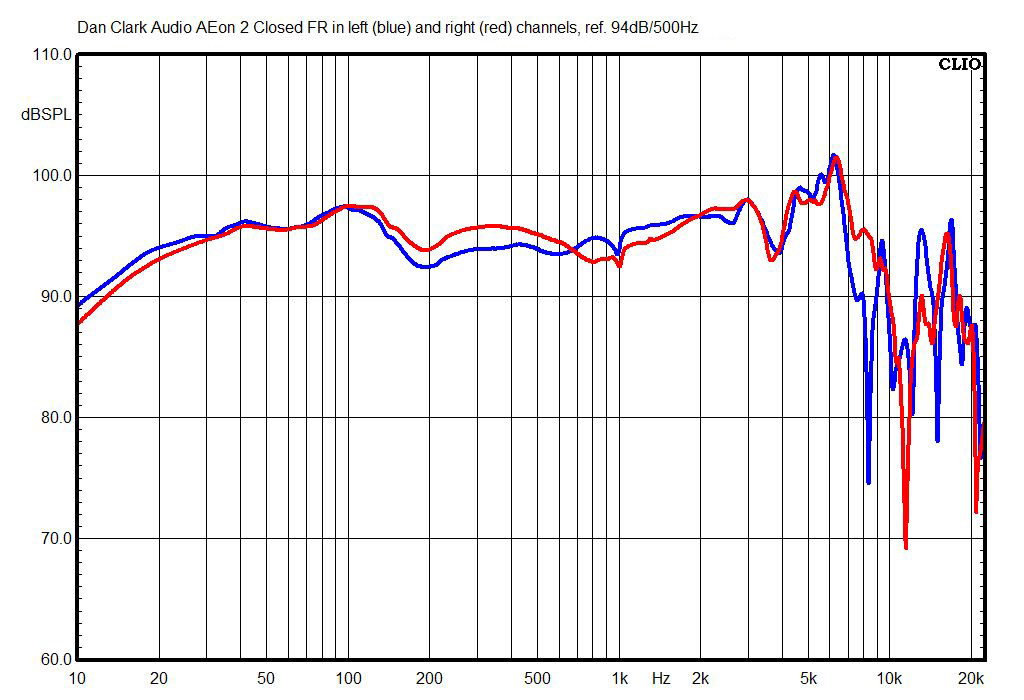 The above chart shows the Æon 2 Closeds’ frequency response with the stock earpads and no filter. What’s unusual about this response is that there’s only a relatively small peak around 2 to 3kHz -- which means the listener may perceive a dip at these frequencies. 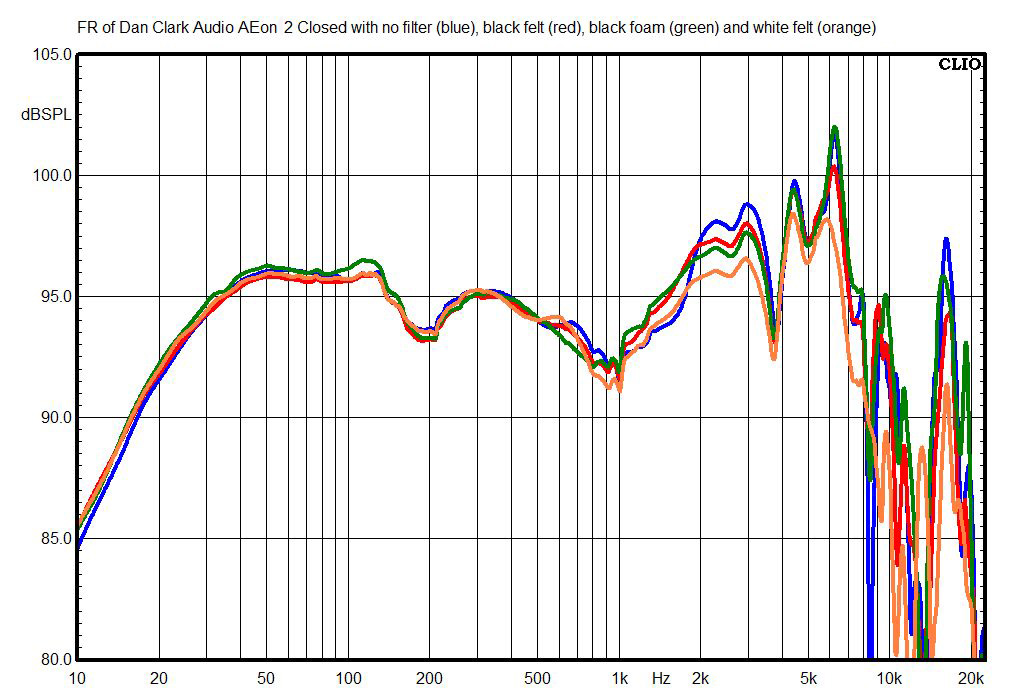 This chart shows the effects of the different filters provided with the Æon 2 Closeds, all referenced to 94dB at 500Hz. Even with the Y-axis resolution on this chart doubled to 5dB per division, the differences are subtle -- they’re basically serving as a treble control. 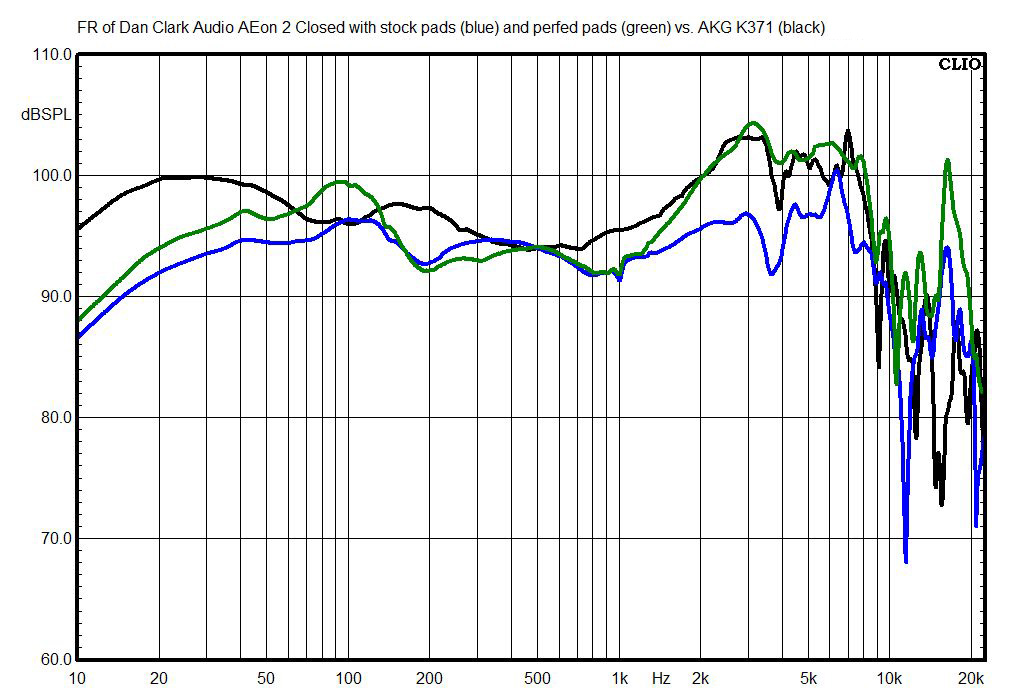 This chart shows the difference in frequency response with the stock earpads and the perforated earpads, referenced to the AKG K371s, the headphones said to be closest to the Harman curve. The perforated pads do, as Dan Clark suggests, get the Æon 2 Closeds fairly close to the Harman curve, at least above 1kHz, and the large increase in energy around 3kHz definitely pushes the headphones much closer to the kind of response I typically measure. Same goes for the extra little bump around 100Hz, although there’s 3 to 7dB less bass than the Harman curve calls for. 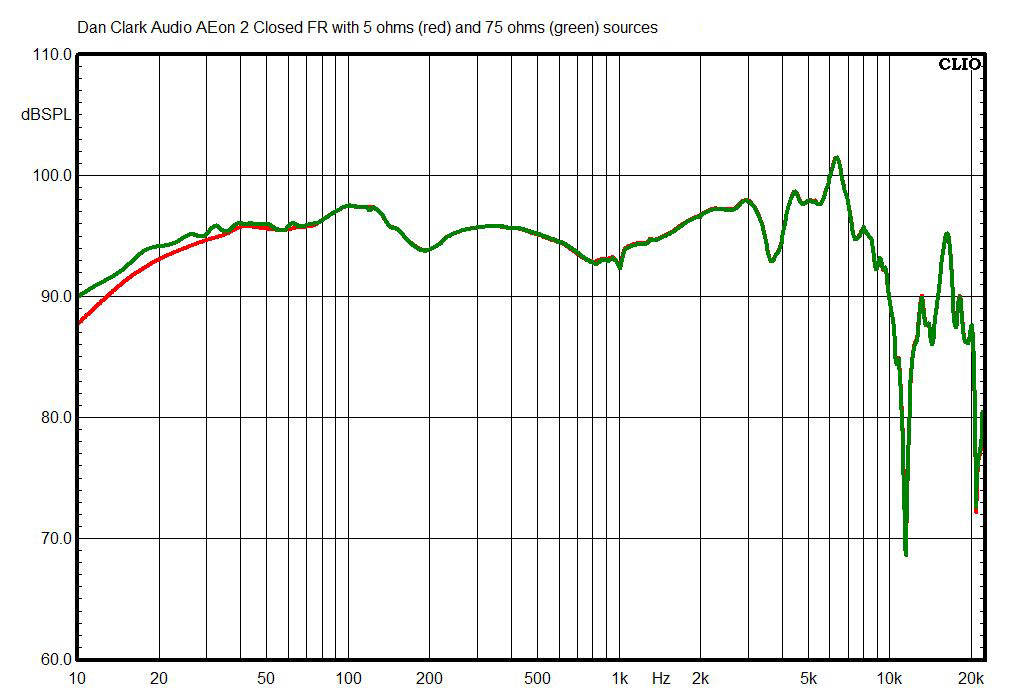 This chart shows how the Æon 2 Closed headphones’ tonal balance changes when they’re used with a high-impedance (75 ohms) source, such as a cheap laptop or some cheap professional headphone amps, or some exotic tube amps. With the high-impedance source, the bass appears to rise by about 1.5dB at 20Hz -- not an audible difference with probably 99% of music recordings. 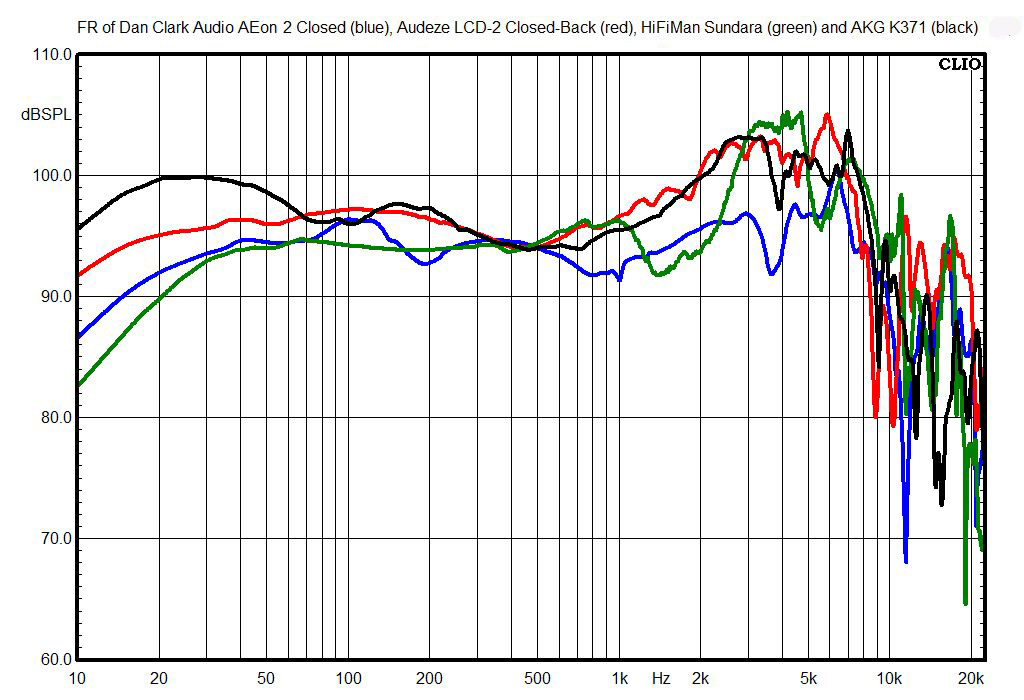 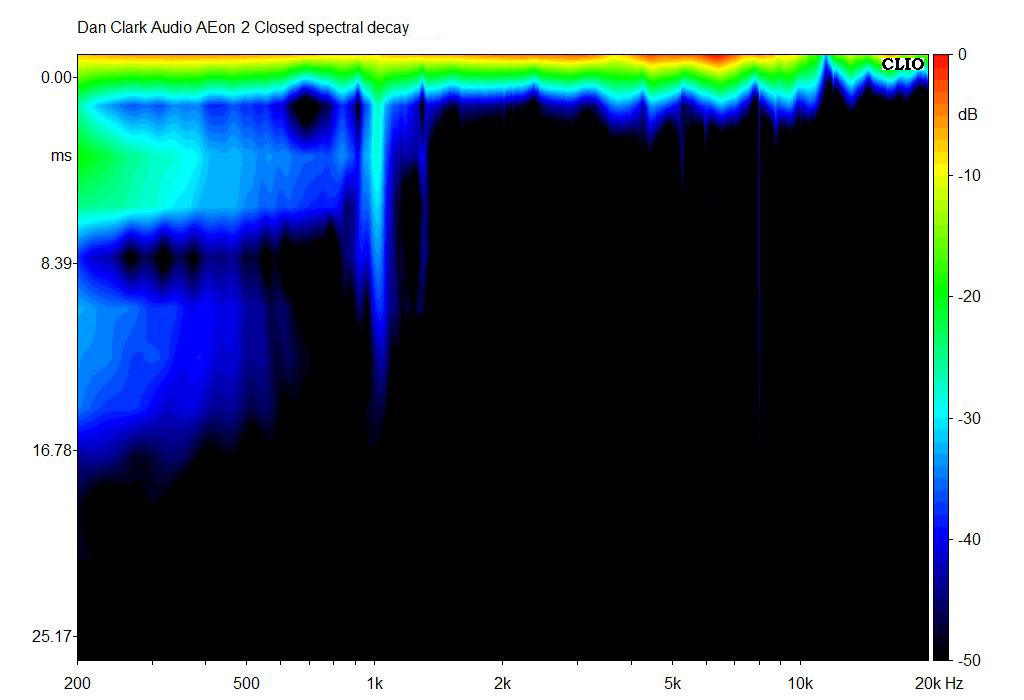 Well, this is weird. With the 36 planar-magnetic headphones I’ve previously measured, I’ve seen a bunch of hashy-looking, very high-Q (i.e., narrow) resonances between about 1.5 and 5kHz, which I’m told represent reflections between the ear/cheek simulator and the large, flat planar diaphragm. To the best of my memory, the Æon 2 Closeds are the first planar-magnetic headphones I’ve measured that don’t show this effect. (Incidentally, the filters could conceivably have damped the reflections, but this measurement was done with no filters in place.) I repeated the measurement a day later with a fresh setup and got a similar result. There is one strong resonance around 1kHz, but it’s so high-Q that I expect it would be only fleetingly audible. I’m not sure if or how this lack of high-Q upper-midrange/lower-treble resonances would affect the sound, but clearly there’s something different in the way Dan Clark Audio engineers its planar-magnetic headphones. 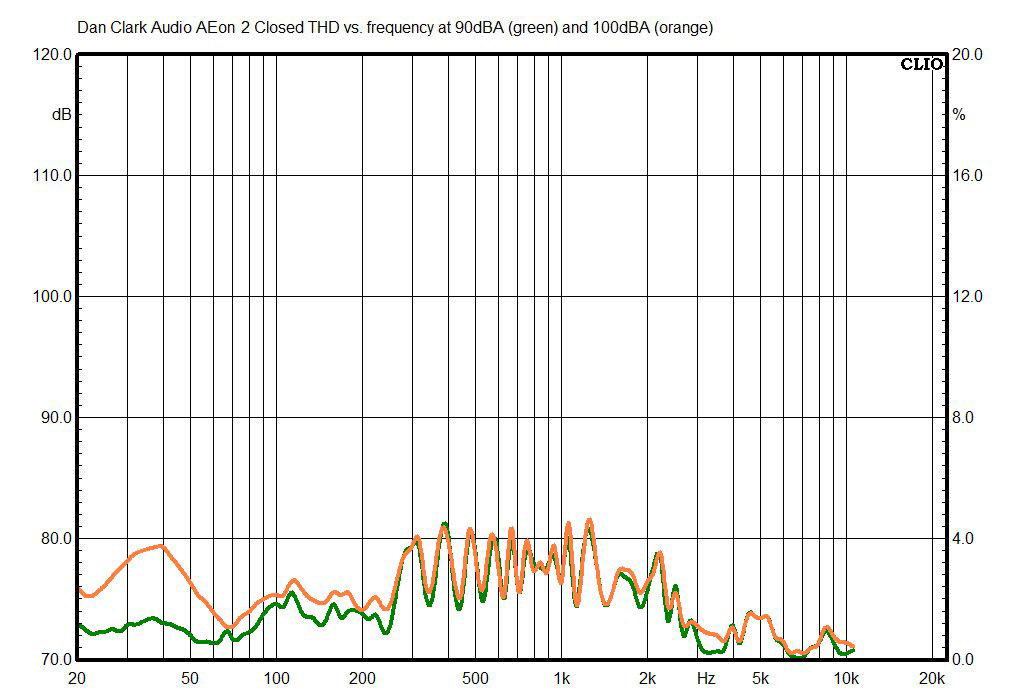 For planar-magnetic headphones, the total harmonic distortion of the Æon 2 Closeds at loud levels is relatively high, averaging around 3% between 300Hz and 1.3kHz. I repeated this measurement with different amps, and with the headphones’ left channel, and got basically the same result every time; other headphones measured in the same session didn’t show this problem. In headphones and speakers, distortion below about 5% is rarely audible, so I don’t necessarily see (or hear) this as an issue, but it’s more evidence that Dan Clark Audio is doing something different with its drivers. 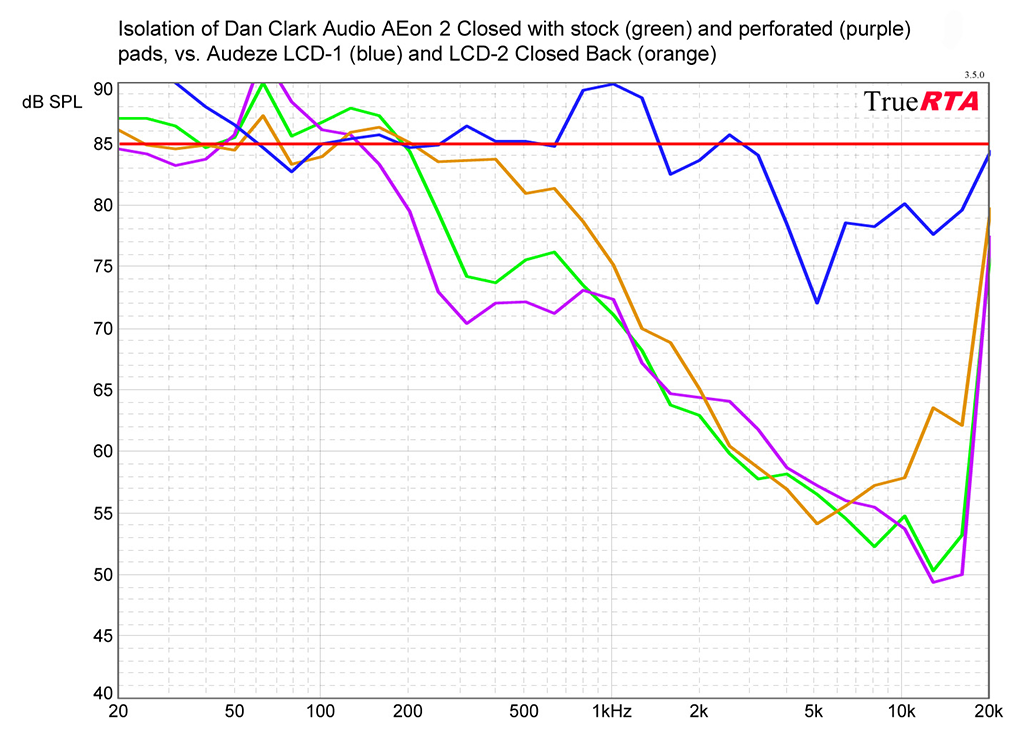 In this chart, the external noise level is 85dB SPL, and numbers below that indicate the degree of attenuation of outside sounds. The lower the lines, the better the isolation. The isolation of the Æon 2 Closed headphones, whether using the stock or perforated pads, is quite good, and an obvious improvement over open-back models such as the Audeze LCD-1 headphones (also shown). I was a little worried that some isolation might be sacrificed with the perforated pads, but it’s actually a little better than the stock pads between 100 and 800Hz. 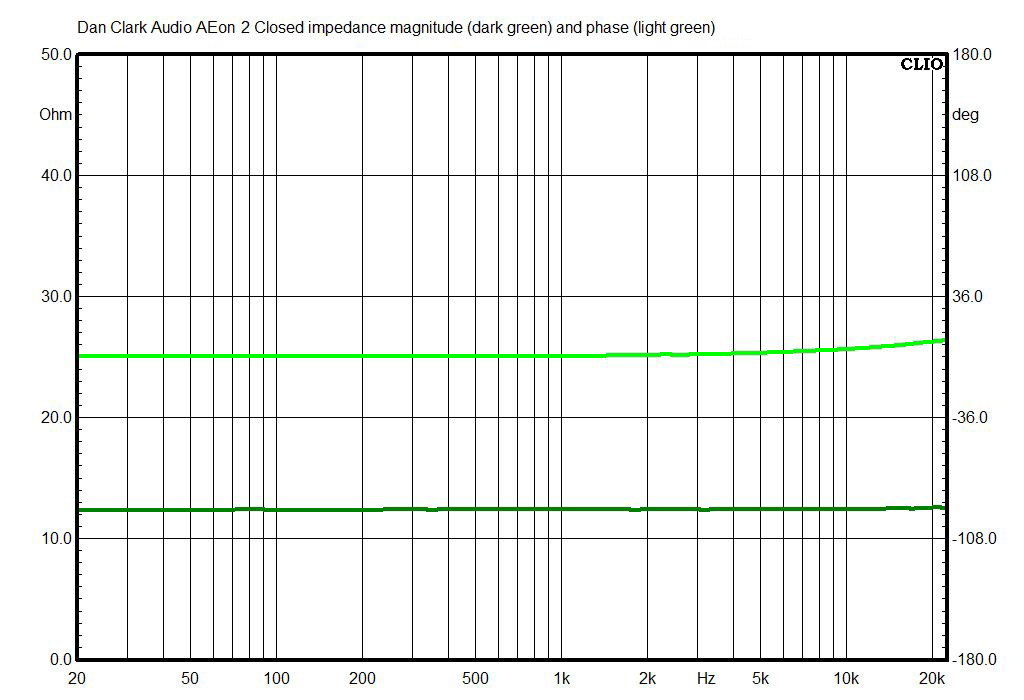 The impedance magnitude of the Æon 2 Closed headphones is dead-flat at 12.5 ohms, and the phase response is very flat.

Sensitivity of the Æon 2 Closeds, measured between 300Hz and 3kHz, using a 1mW signal calculated for 13 ohms rated impedance, is 86.7dB. That’s low, so I strongly recommend using an external amp or a high-quality portable music player with these.