I measured the PM-50 headphones using laboratory-grade equipment: a G.R.A.S. Model 43AG ear/cheek simulator/RA0402 ear simulator with KB5000/KB5001 simulated pinnae, and a Clio 10 FW audio analyzer. For isolation measurements, I used a laptop computer running TrueRTA software with an M-Audio MobilePre USB audio interface. The headphones were amplified using a Musical Fidelity V-CAN. These are “flat” measurements; no diffuse-field or free-field compensation curve was employed. If you’d like to learn more about what our measurements mean, click here. 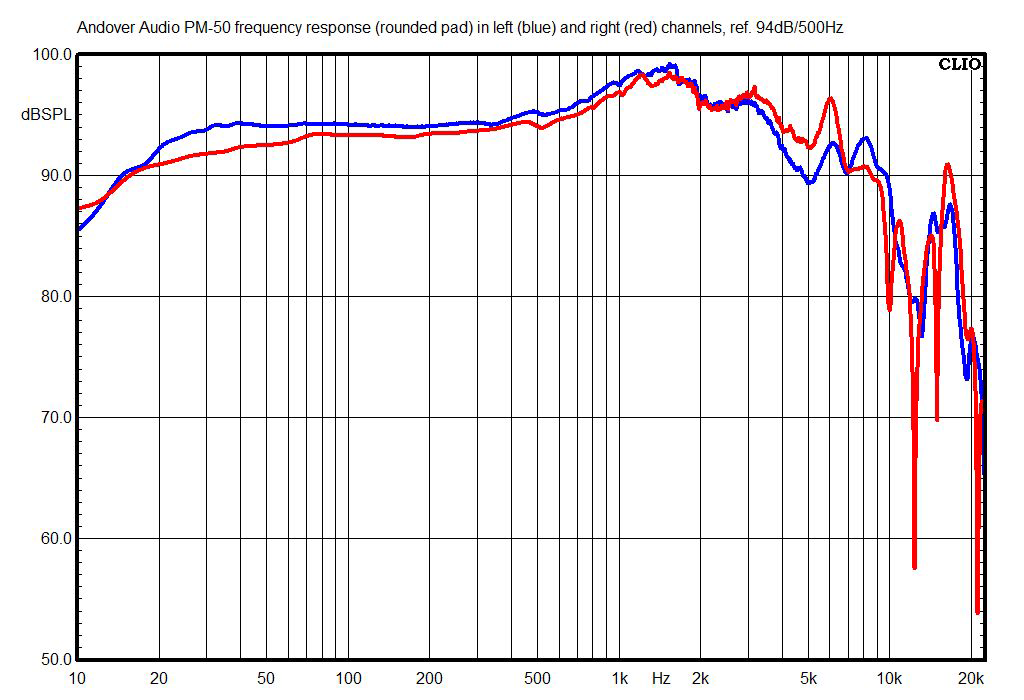 The above chart shows the PM-50s’ frequency response with the rounded pads. This is an unusually flat response, as we’ll see in the comparison graph below. 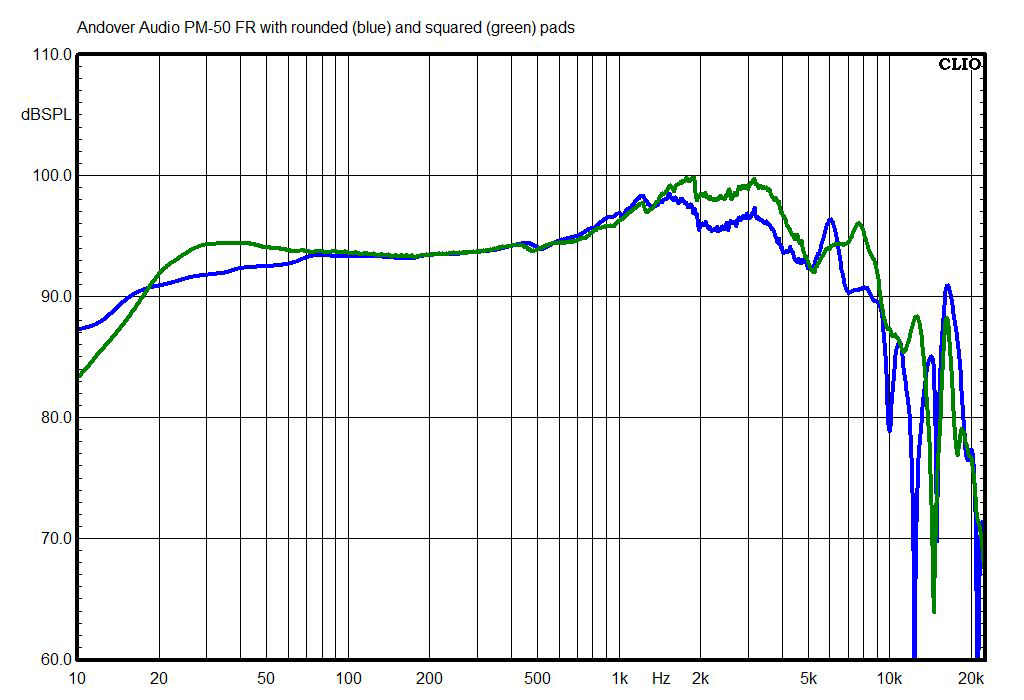 This chart shows the difference in frequency response with the rounded pads and the squared pads. The squared pads add an average of about 3dB more energy between about 20 and 50Hz, and again between about 1.8 and 4.2kHz, so they’re likely to have a more vivid, exciting sound (which may or may not be a good thing). 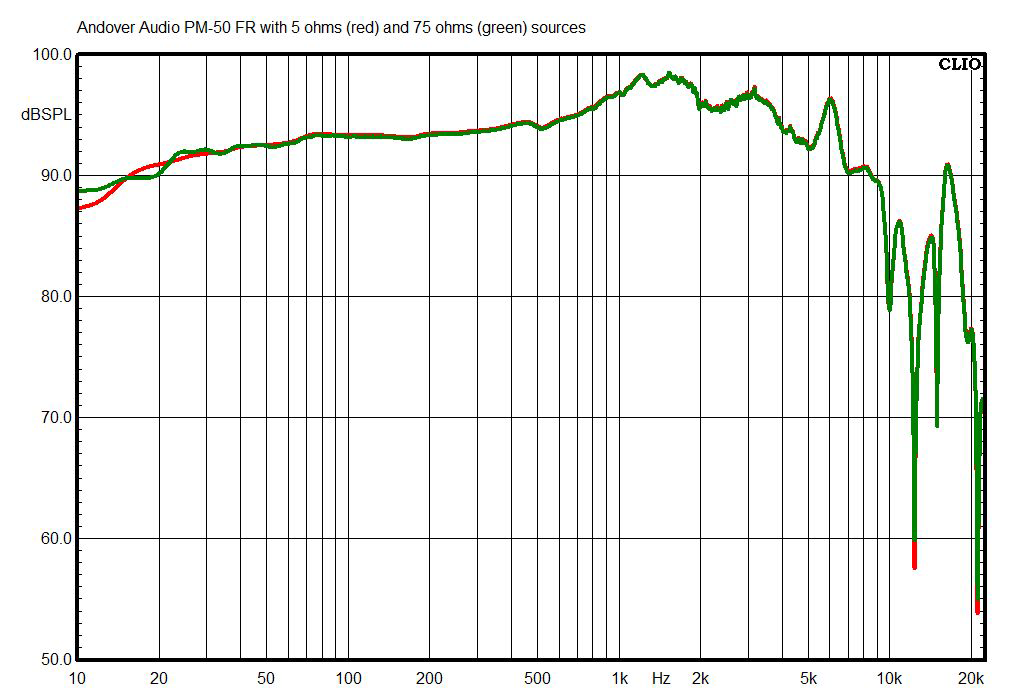 This chart shows how the PM-50s’ tonal balance (with the rounded pads) changes when they’re used with a high-impedance (75 ohms) source, such as a cheap laptop or some cheap professional headphone amps, or some exotic tube amps. There’s basically no difference, as is typically the case with planar-magnetic headphones. 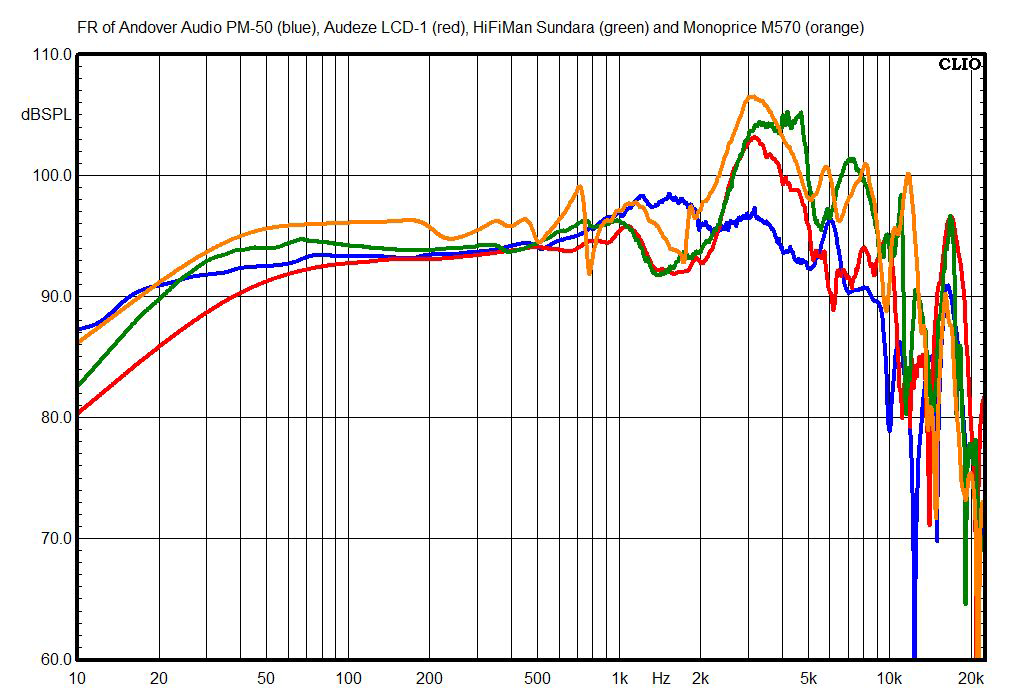 This chart shows the PM-50s’ right-channel response with the rounded pads compared with several open-back planar-magnetic headphones priced in the mid-three figures. You can see that the PM-50s have a lot more energy around 1.5kHz than the others, and a lot less energy around 3kHz. I’m surprised that this doesn’t sound weird. 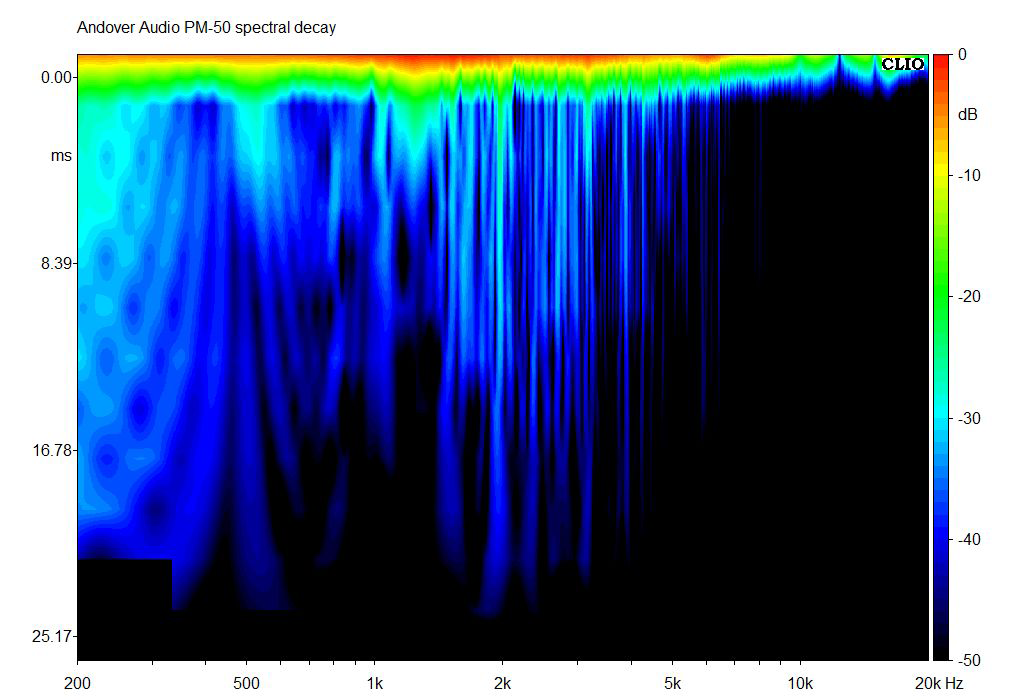 The only major anomaly on in the PM-50s’ spectral-decay (waterfall) chart actually isn’t an anomaly for planar-magnetic headphones -- a bunch of very high-Q (narrow) resonances between about 1.3 and 6kHz; these appear to be due to reflections between the large, flat planar driver and the flat cheek plate of the G.R.A.S. Model 43AG ear/cheek simulator. There’s also a minor, well-damped resonance at around 1.3kHz, which corresponds to the response peak in the same vicinity. 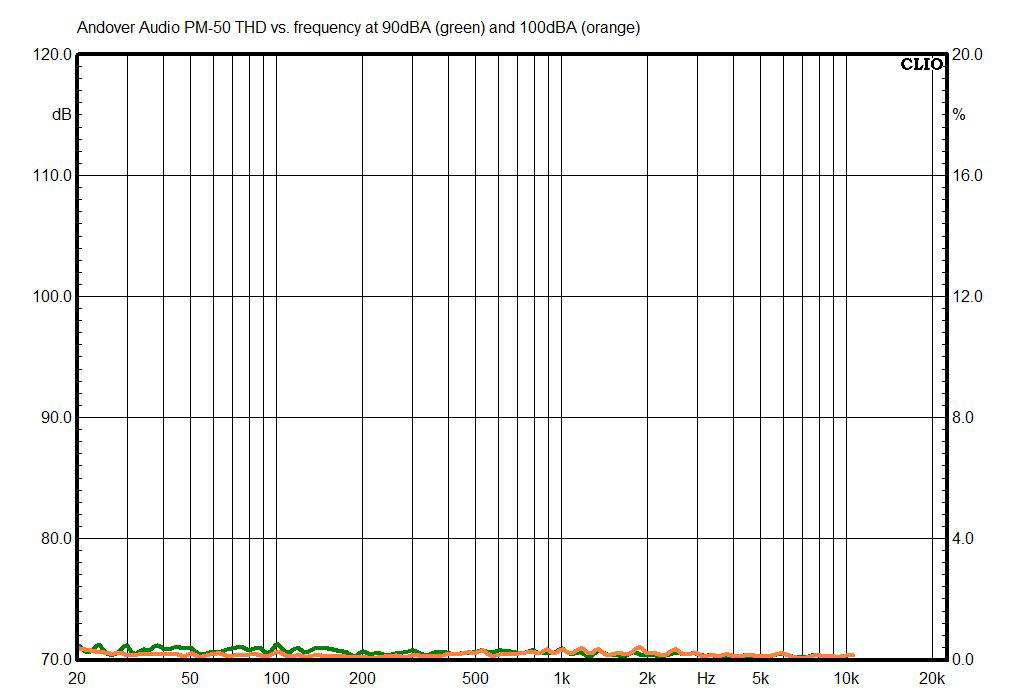 As is often the case with planar-magnetic headphones, the total harmonic distortion of the PM-50s is extremely low. 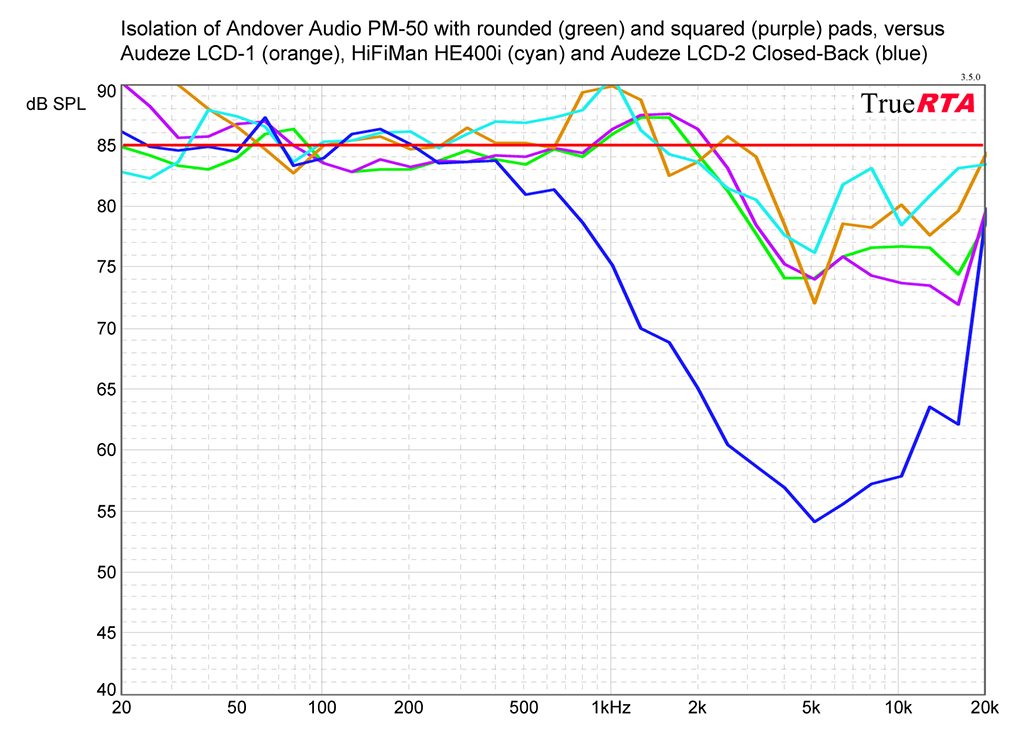 In this chart, the external noise level is 85dB SPL, and numbers below that indicate the degree of attenuation of outside sounds. The lower the lines, the better the isolation. The isolation of the PM-50s, whether using the rounded or squared pads, is about the same as that of competing open-back models. I added the Audeze LCD-2 Closed-Back headphones so you could see how a closed-back planar-magnetic model fares in this test. 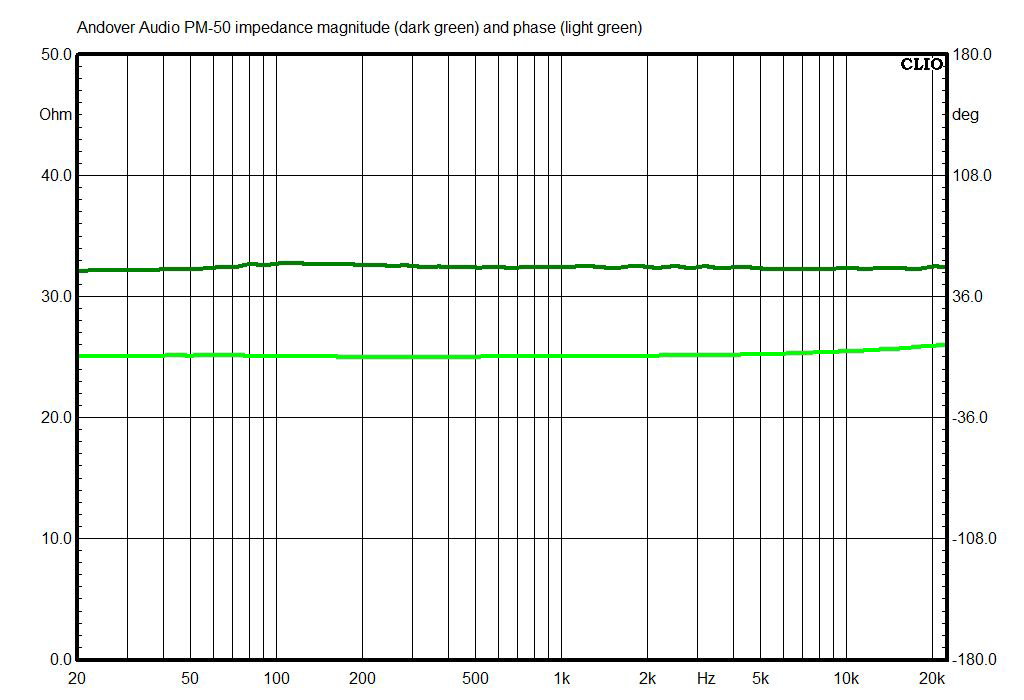 The impedance magnitude of the PM-50s is flat at 32 ohms, and the phase response is very flat.

Sensitivity of the PM-50 headphones, measured between 300Hz and 3kHz using a 1mW signal calculated for 32 ohms rated impedance, is 104.7dB. That’s very high for planar-magnetic headphones, so as stated in the text, these will play plenty loud off a smartphone except perhaps with older recordings that are mastered at low levels and that you want to crank.