I measured the Monitor II A.N.C. headphones using professional-grade equipment: a G.R.A.S. Model 43AG ear/cheek simulator/RA0402 ear simulator with the KB5000 and KB5001 anthropomorphic simulated pinnae, a Clio 10 FW audio analyzer, a laptop computer running TrueRTA software with an M-Audio MobilePre USB audio interface, and a Musical Fidelity V-CAN amp. For measurements in Bluetooth mode, I used an MEE Audio Connect Bluetooth transmitter to get the signal to the headphones. These are “flat” measurements; no diffuse-field or free-field compensation curve was employed. If you’d like to learn more about what our measurements mean, click here. 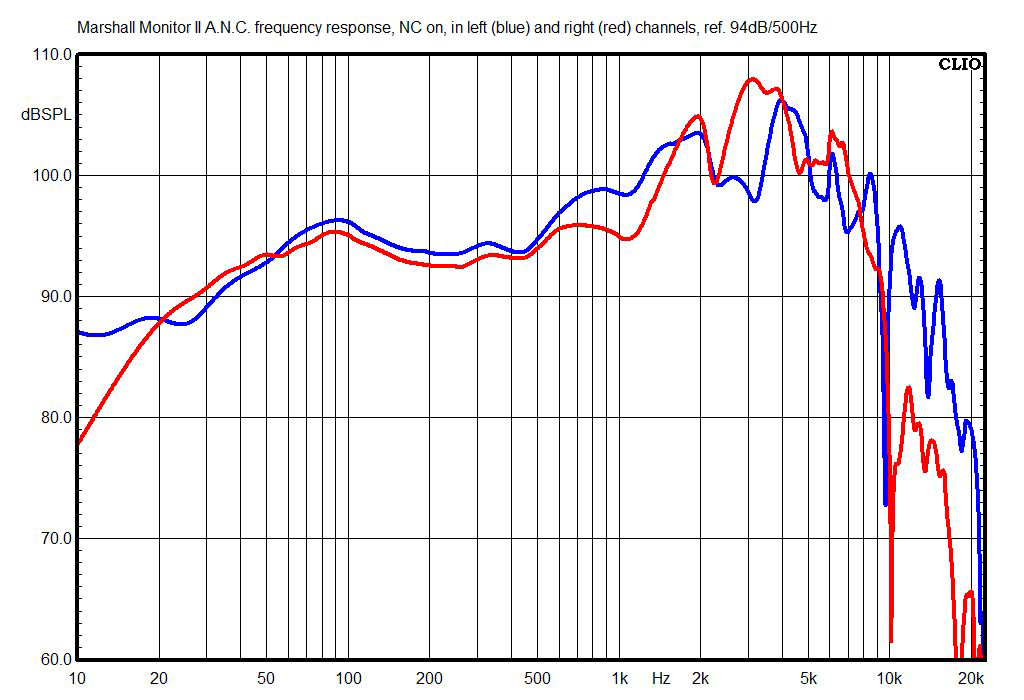 The above chart shows the Monitor II A.N.C.s’ frequency response measured in what I expect will be the headphones’ most-used mode: Bluetooth with noise canceling on, with the stock Marshall EQ setting. This is a fairly weird response, lacking in bass energy and with what appears to be a couple dB excess energy in the upper mids and lower treble. This is the best match between left and right channels I was able to achieve; it’s possible that slightly different acoustics inside the earpieces resulted in the mismatch, or it could be that the Monitor II A.N.C.s just have a fussy fit on my ear/cheek simulator. 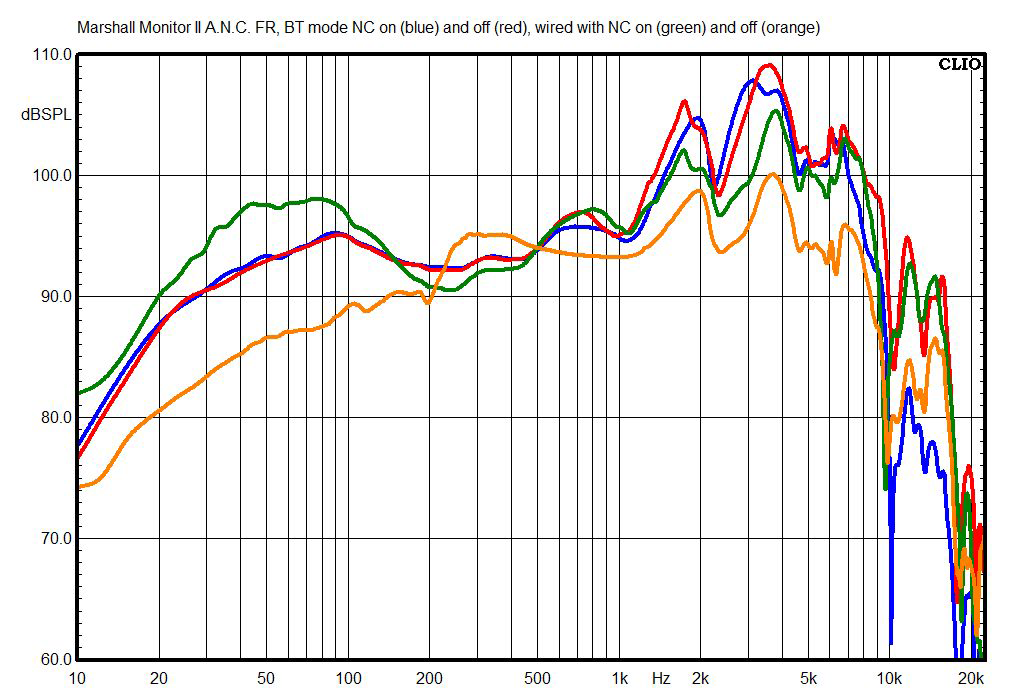 Here you can see the difference in response when the Monitor II A.N.C.s are used in Bluetooth mode with NC on and off, and in wired mode with the power off and power on with NC on, all with the stock Marshall EQ mode. The most “normal” of all these measurements is in wired mode with NC on; it shows a reasonable balance between bass and upper midrange/lower treble. Note the orange trace, which is the response you’ll get with the headphones cabled and power off. This is the “native” acoustical response of the driver and its surrounding components (earcup, earpads, and baffle). Its strange appearance suggests that Marshall didn’t put much work into the acoustics, and instead relied on digital signal processing to tune the headphones -- an increasingly common practice. 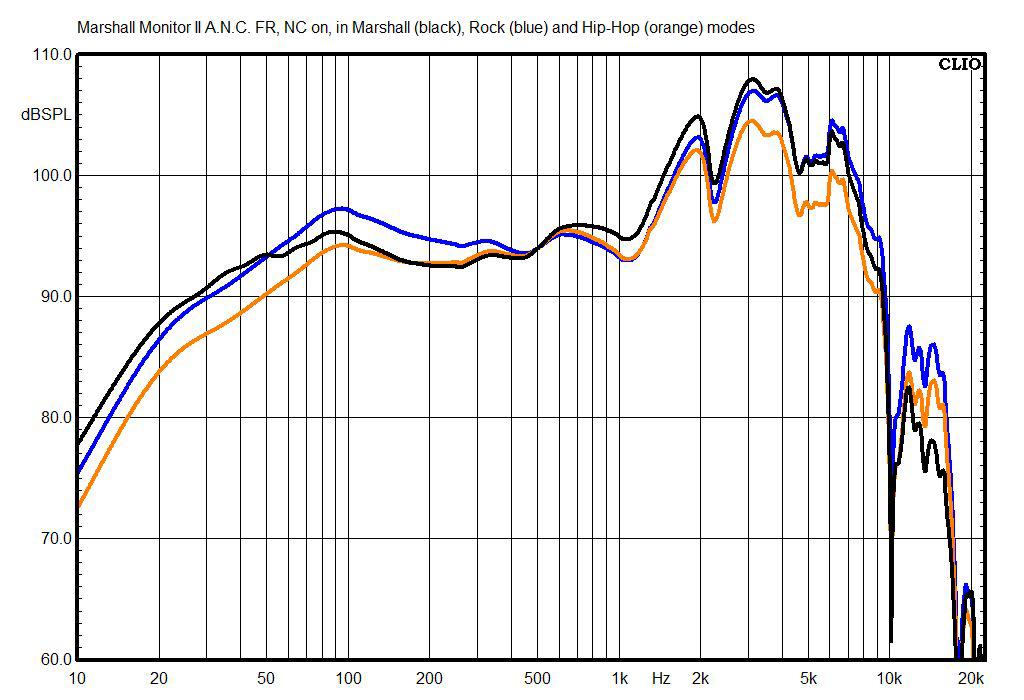 This chart shows the effects of two of the EQ modes: Rock and Hip-Hop. Note that the effects of these EQ settings are fairly modest in terms of dBs plus or minus, but they’re enough to make a significant subjective difference in the sound. 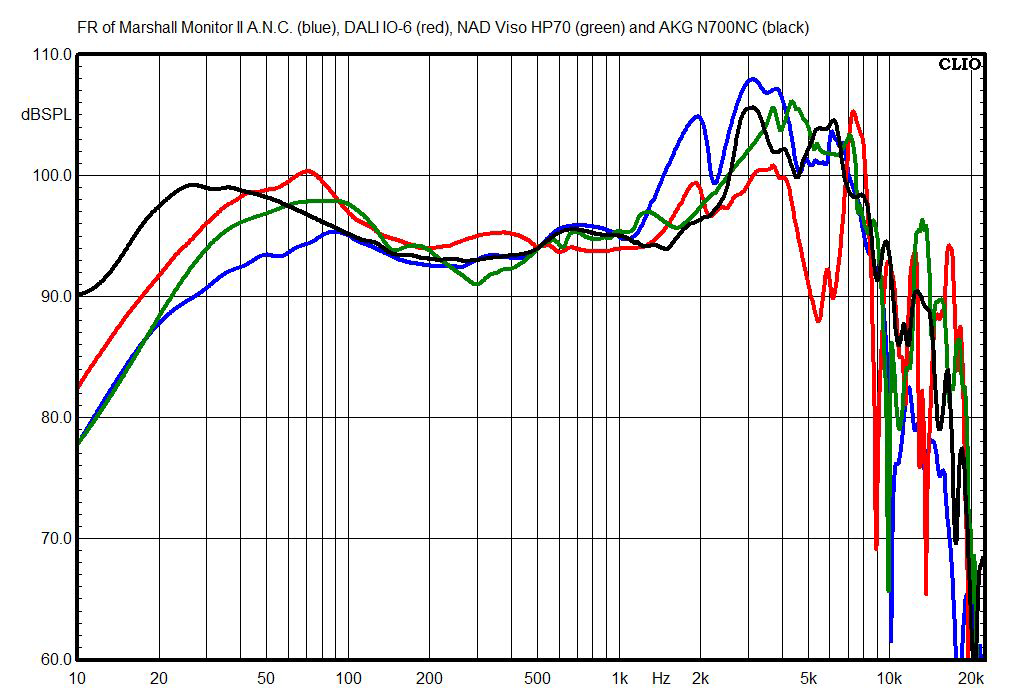 This graph shows the response of the Monitor II A.N.C.s in Marshall EQ mode compared with similar designs (the DALI IO-6, NAD Viso NP70, and the AKG N700NC headphones, which conform closely to the Harman curve). All are shown in Bluetooth mode with noise canceling on. Note that the Monitor II A.N.C.s, in the Marshall EQ mode, have clearly the least bass and the strongest output in the upper midrange and lower treble around 2 to 4kHz. There’s no way this setting is going to sound normal -- I can’t fathom why Marshall made this their default setting. 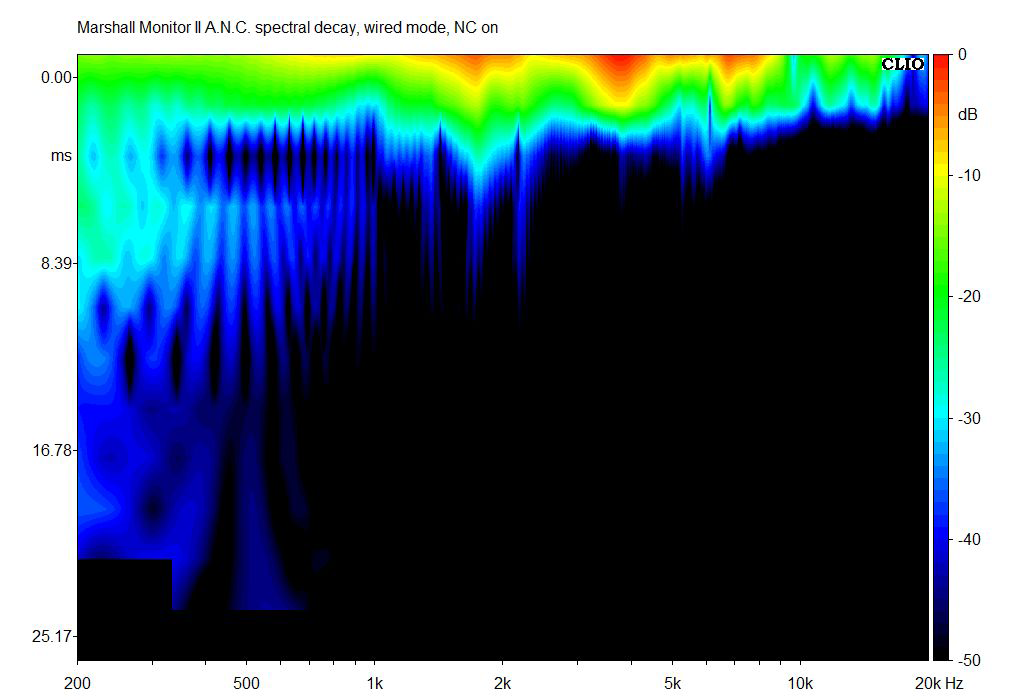 The Monitor II A.N.C.s’ spectral decay (waterfall) chart -- measured with a wired connection because of Bluetooth’s latency, and in active mode with NC on -- looks pretty clean, indicating there are no significant resonances. 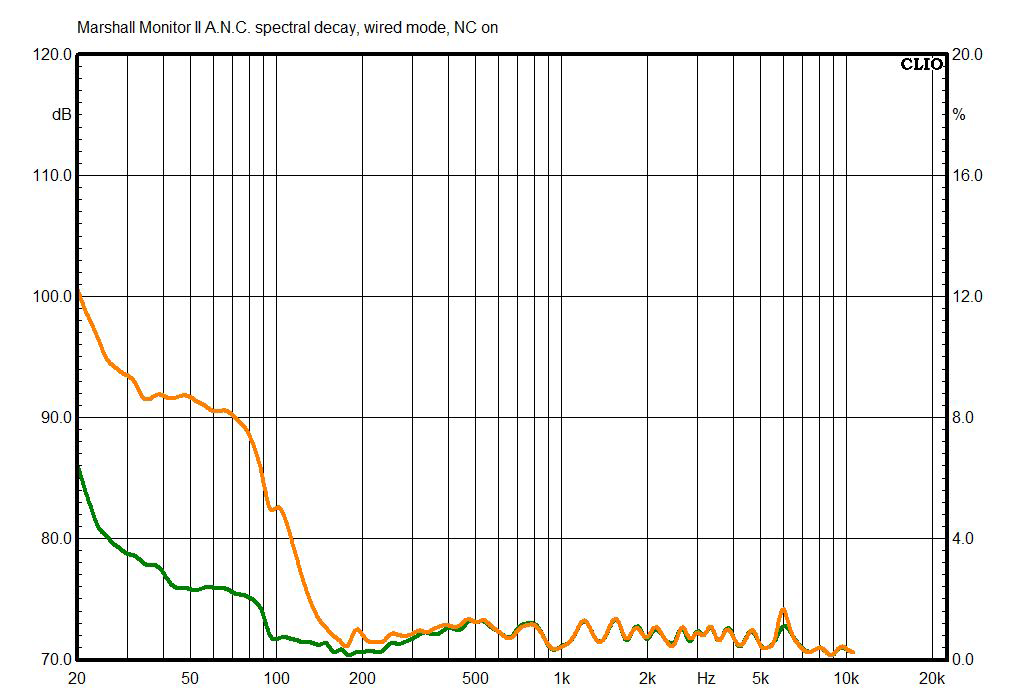 The Monitor II A.N.C.s’ distortion is measured here with a wired connection with NC on, so this incorporates any distortion added by the internal amps and the noise-canceling circuitry. The distortion is a little on the high side in the bass, although it’s only 2 to 3% at the loud listening level of 90dBA. At the crazy-loud level of 100dBA, it starts to get into the 8 to 9% range. It’s higher below 40Hz, but with most music (EDM and hip-hop perhaps excepted), there’s not much content below 40Hz, and distortion seemed low when I listened to hip-hop (although at a more reasonable volume). 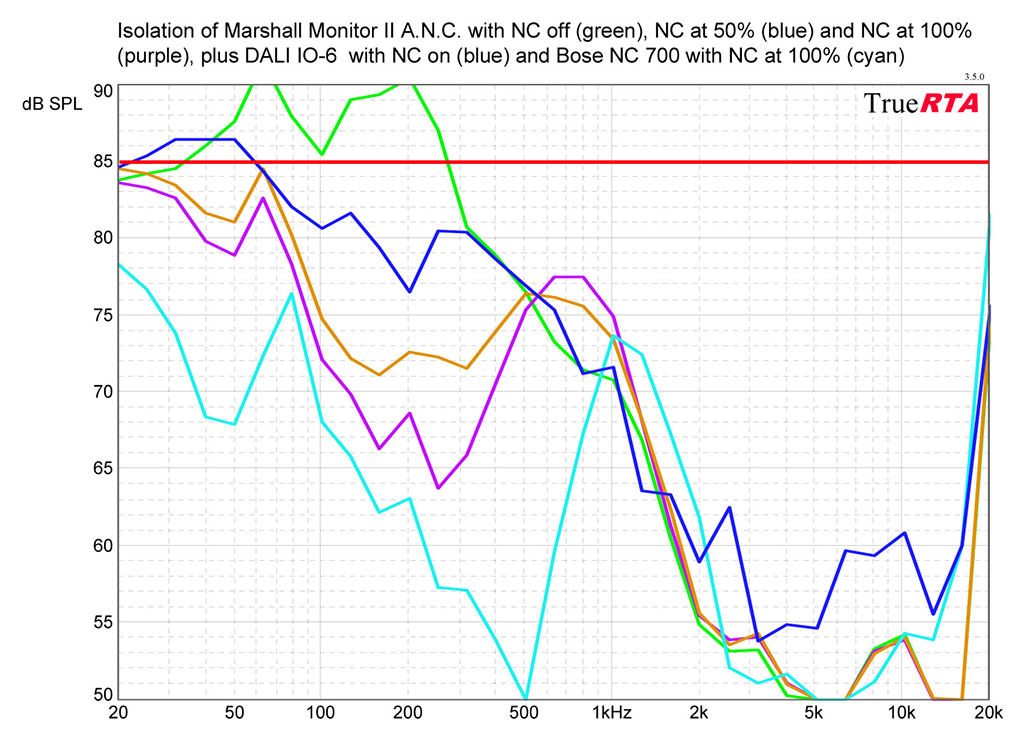 In this chart, the external noise level is 85dB SPL, and numbers below that indicate the degree of attenuation of outside sounds. The Monitor II A.N.C.s’ active noise canceling at its maximum setting is pretty good, with 10 to 20dB of noise rejection between 100 and 500Hz -- not Bose-class, but clearly much better than the DALI IO-6 headphones also shown here. 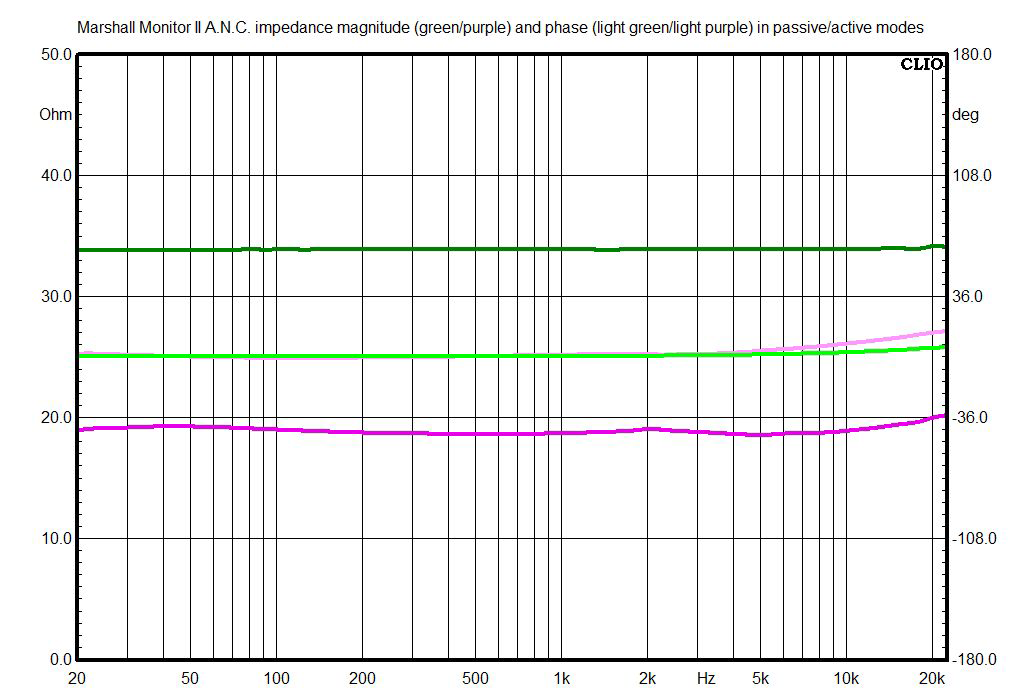 The Monitor II A.N.C.s’ impedance magnitude measurement is dead flat at 33 ohms in passive mode, and almost dead flat at 19 ohms in active mode. Phase in both modes is also nearly flat.

Bluetooth latency of the Monitor II A.N.C. headphones used with the MEE Audio Connect transmitter was 233ms. Sensitivity of the Monitor II A.N.C.s in passive mode, measured between 300Hz and 3kHz using a 1mW signal calculated for the rated 32 ohms impedance, is 103.9dB, so if the batteries run down and you have to use a wired connection, they’ll play loud, although you can see from the frequency-response chart that they won’t have much bass.