I measured the HA-FW01 earphones using laboratory-grade equipment: a G.R.A.S. Model 43AG ear/cheek simulator/RA0402 ear simulator with KB5000/KB5001 simulated pinnae, and a Clio 10 FW audio analyzer. For isolation measurements, I used an M-Audio Mobile Pre USB interface and TrueRTA spectrum-analyzer software. The earphones were amplified using a Musical Fidelity V-CAN. Except as noted, all measurements were made using medium-sized, single-flange silicone eartips, as these fit the ear/cheek simulator best. These are “flat” measurements; no diffuse-field or free-field compensation curve was employed. If you’d like to learn more about what our measurements mean, click here. 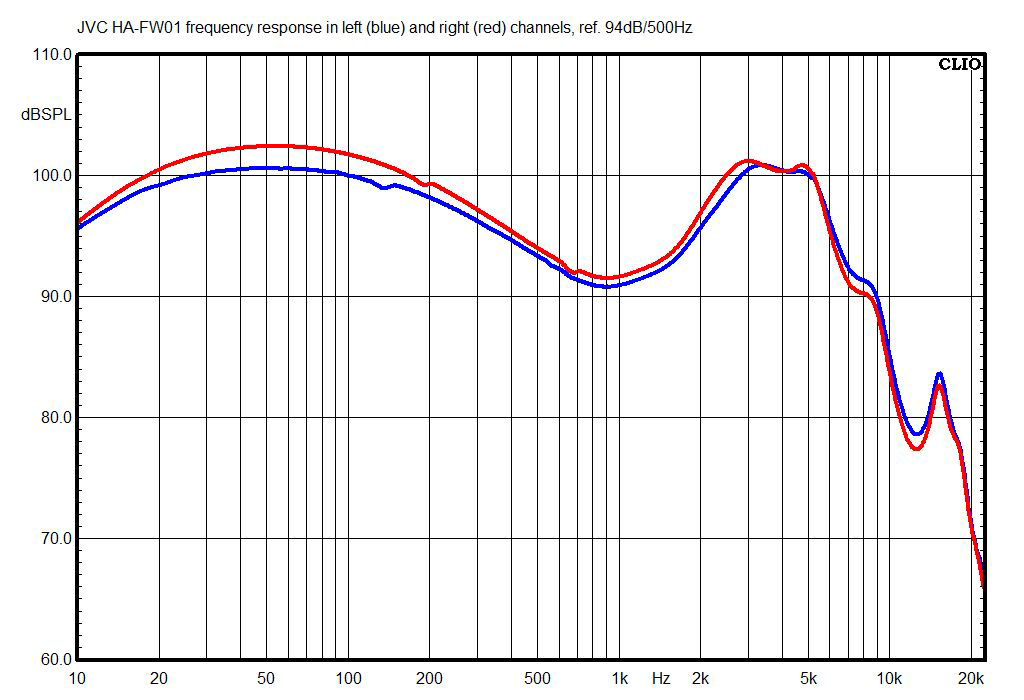 The above chart shows the HA-FW01s’ frequency response. Historically speaking, this is pretty much a textbook response -- i.e., one that’s been common in earphones going back at least as long as I’ve been measuring them (about eight years) and probably long before. I couldn’t count the number of times I’ve seen that big, broad bump below 800Hz and the strong emphasis around 3 to 5kHz (which corresponds to the canal resonance of the ear simulator). 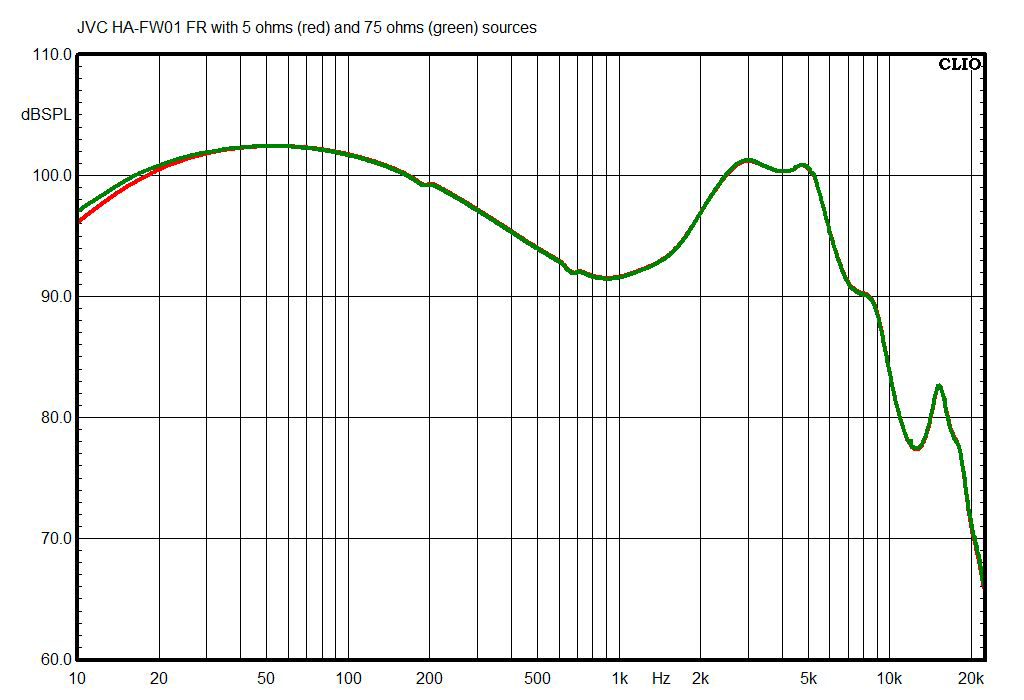 This chart shows how the HA-FW01s’ tonal balance changes when they’re used with a high-impedance (75 ohms) source, such as a cheap laptop, some cheap professional headphone amps, or some exotic tube amps. It’s identical except for a difference of less than 1dB at 20Hz, which no one would notice. 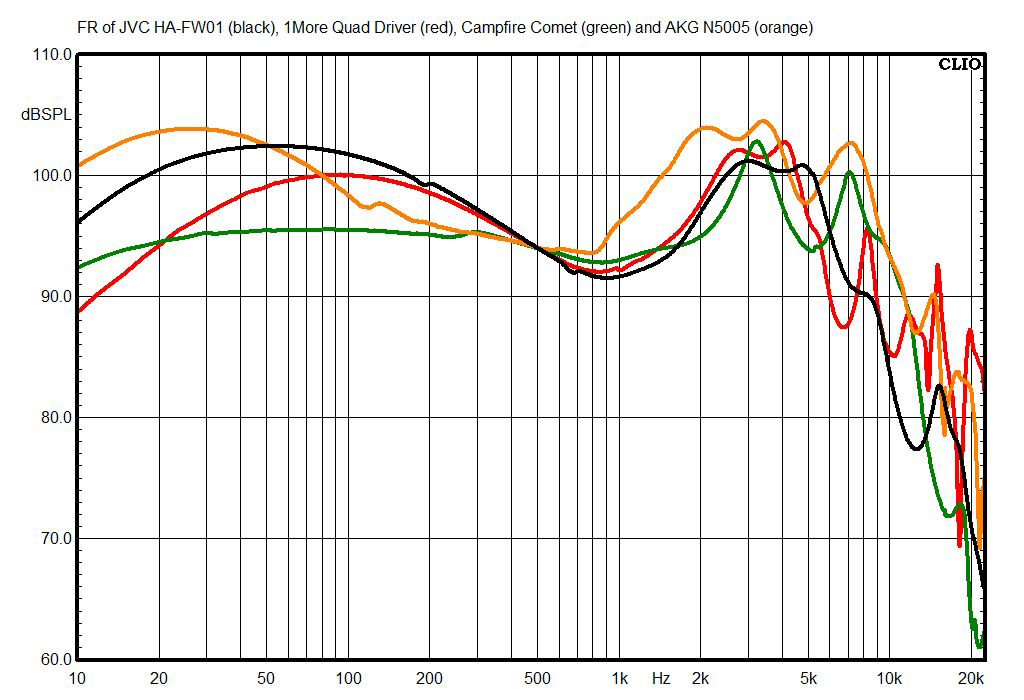 This chart shows the HA-FW01s’ right-channel response compared with a couple of affordable audiophile-oriented earphones, as well as the AKG N5005s, which when used with their reference filter are the earphones said to best conform to the Harman curve, the response that research shows delivers what most listeners consider the most natural sound. Here we can see how a typical earphone response differs from the Harman curve. If you limited the HA-FW01s’ bass/lower-mid bump to below 100Hz, and shifted the upper-mid/lower-treble bump down by 1kHz, you’d have a Harman-curve earphone. 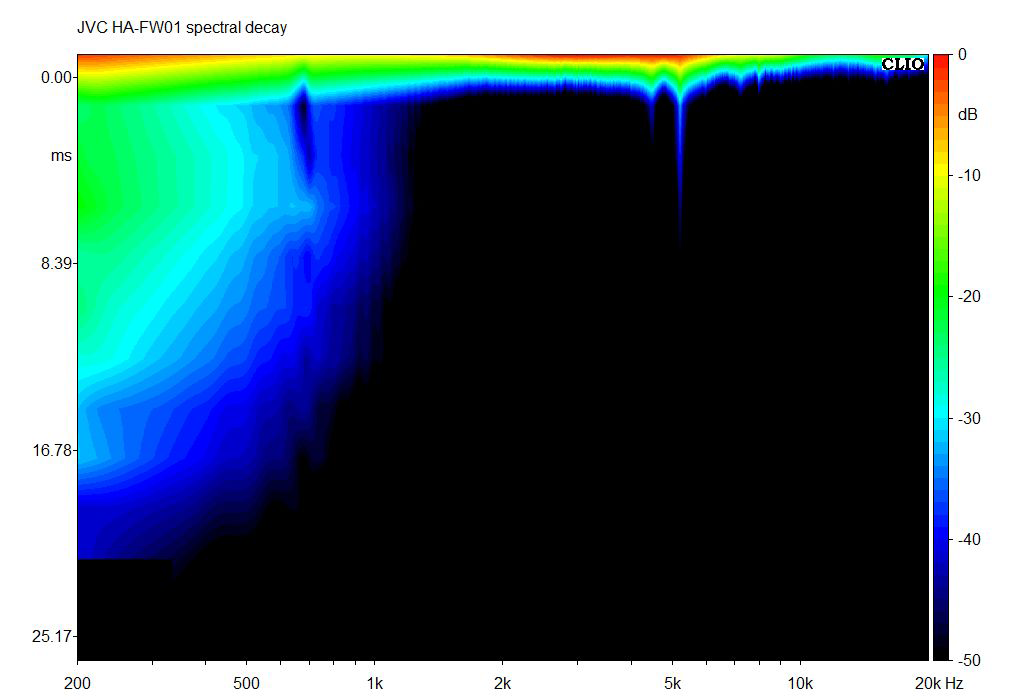 The HA-FW01s’ spectral-decay (waterfall) chart shows substantial resonance below 500Hz, perhaps the reason we thought the sound was a bit bassy. There’s also the slightest sliver of a very well-damped and extremely high-Q resonance at about 4.6kHz, which doesn’t correspond with anything in the frequency-response or distortion charts, but does correspond with a wrinkle in the impedance curve, for what it’s worth. 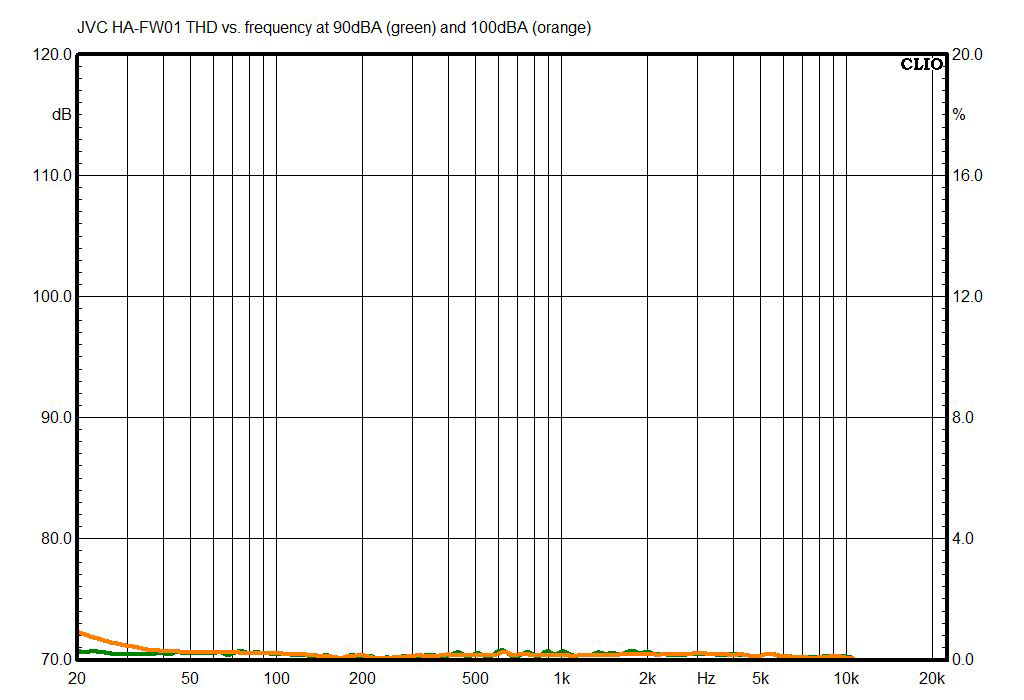 Here’s the HA-FW01s’ total harmonic distortion measured at levels of 90dBA and 100dBA, both determined with pink noise. This is an outstanding result, among the lowest distortion I’ve measured in a set of earphones. That’s a tough little driver. 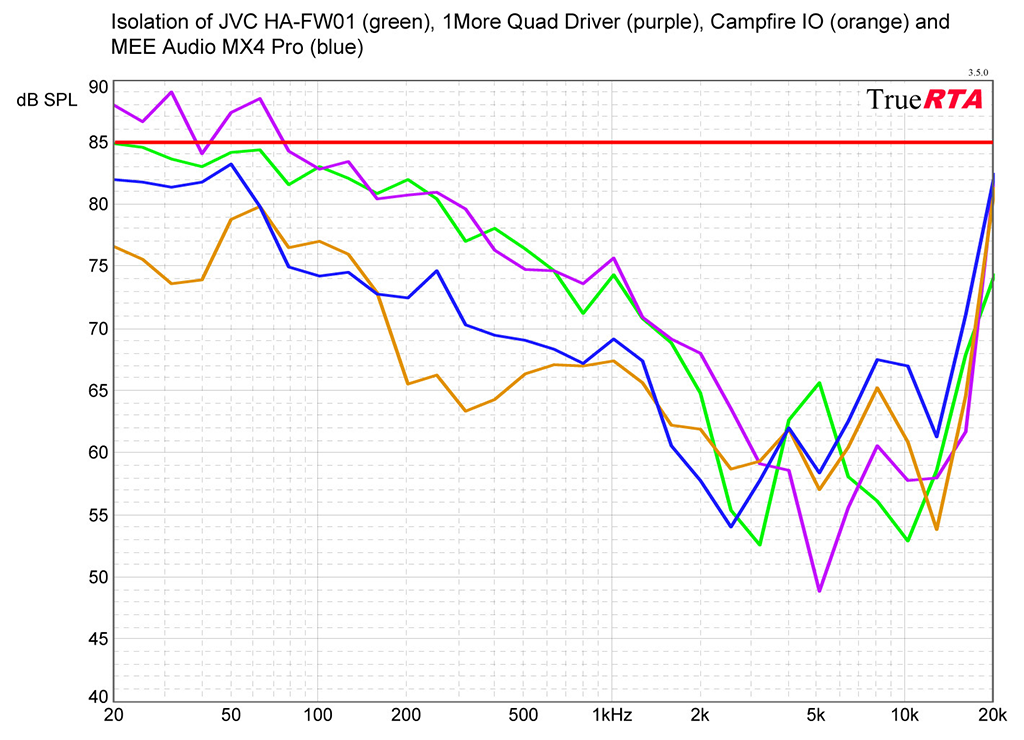 This chart is produced by playing 85dB SPL pink noise through four speakers plus a subwoofer, “flatlining” the response at the ear/cheek simulator at 85dB, then inserting the earphones and observing the reduction in noise reaching the simulator’s internal microphone. As you can see, the HA-FW01s’ noise isolation is nothing special, roughly the same as that of the physically similar 1More Quad Driver earphones’ noise isolation, and not as good as seen in the earlobe-filling Campfire and MEE Audio models. 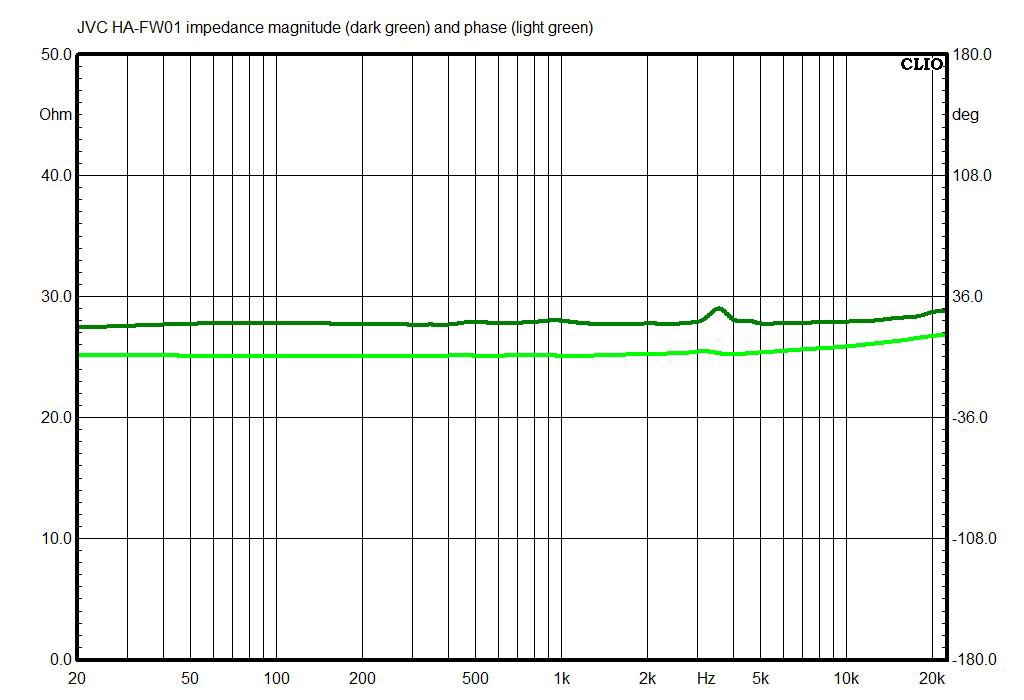 The impedance magnitude of the HA-FW01s is just about dead-flat at 27.5 ohms, and the phase is similarly flat.

Sensitivity of the HA-FW01 earphones, measured between 300Hz and 3kHz, using a 1mW signal calculated for the rated 28 ohms impedance, is 108.9dB, thus the HA-FW01s will deliver plenty of volume from any source device.