I measured the Drop + THX Panda headphones using laboratory-grade equipment: a G.R.A.S. Model 43AG ear/cheek simulator/RA0402 ear simulator with KB5000/KB5001 simulated pinnae, and a Clio 10 FW audio analyzer. For isolation measurements, I used a laptop computer running TrueRTA software with an M-Audio MobilePre USB audio interface. The headphones were amplified using a Musical Fidelity V-CAN; Bluetooth measurements were made using an MEE Audio Connect Bluetooth transmitter. These are “flat” measurements; no diffuse-field or free-field compensation curve was employed. If you’d like to learn more about what our measurements mean, click here. 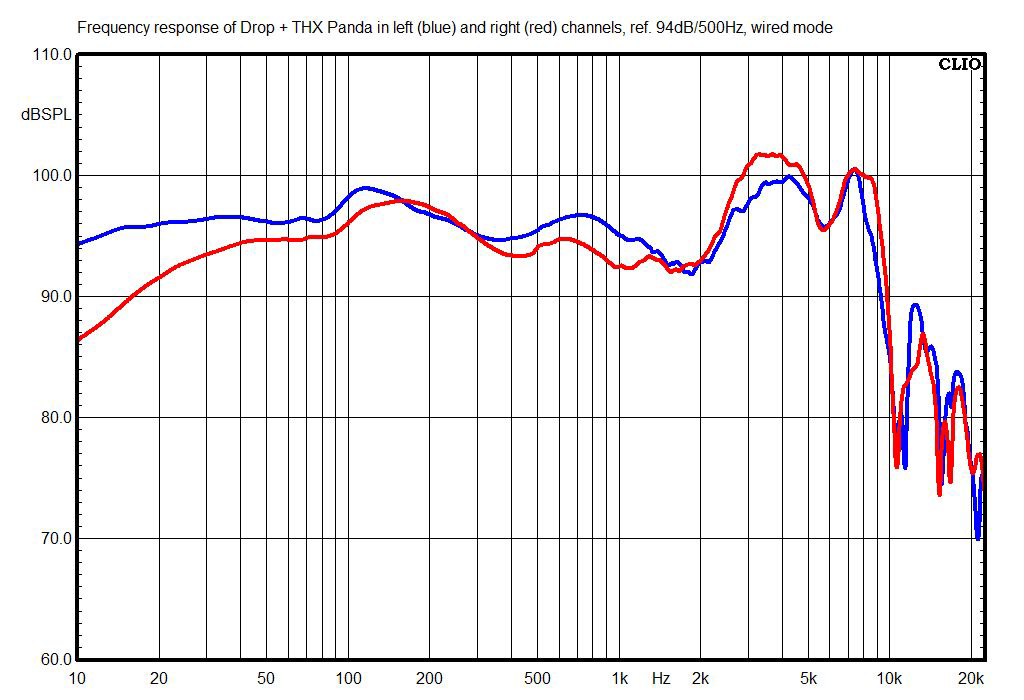 The above chart shows the Pandas’ frequency response in wired mode, which gave me the most consistent measurements (wired mode vs. Bluetooth mode shown below). This response is generally in the ballpark of what I measure from good, closed-back headphones, with perhaps a bit less bass than usual. 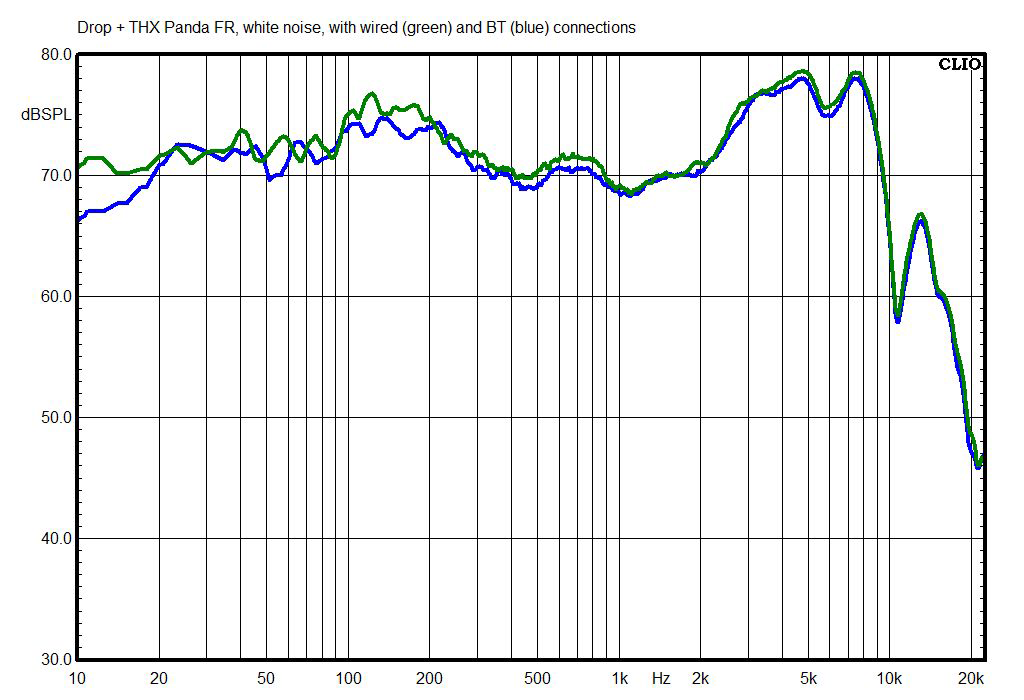 These measurements, made using white noise with a spectrum analyzer, compare the Pandas’ frequency response in wired and Bluetooth modes. They’re very close, especially considering that some of the observed differences are surely due to the inherent inaccuracy of noise-based measurements. 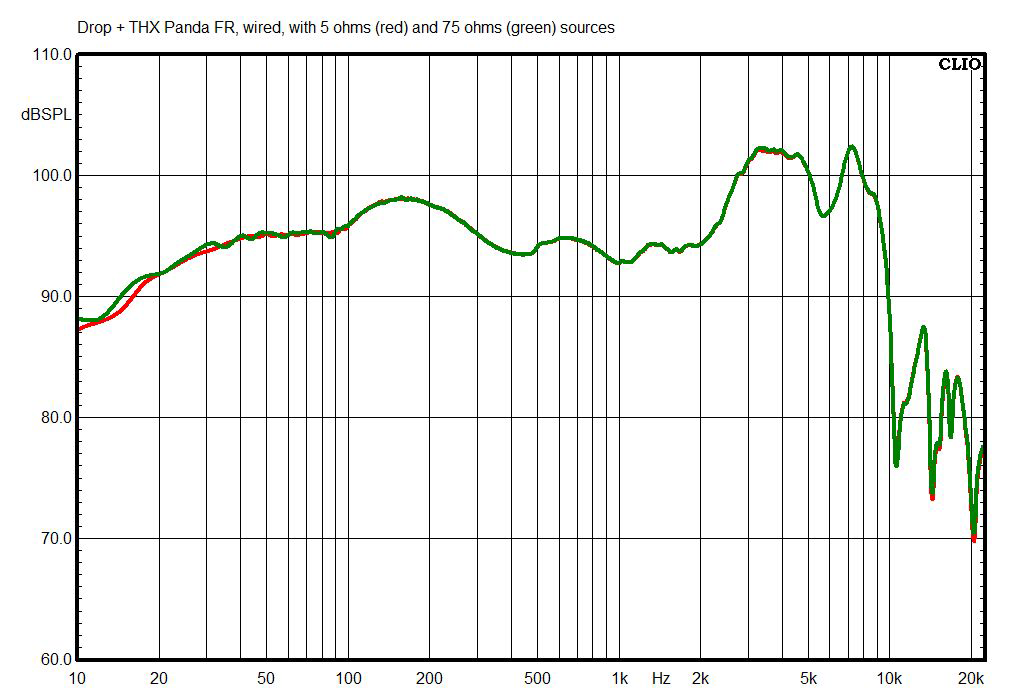 This chart shows how the Pandas’ tonal balance changes when they’re used with a high-impedance (75 ohms) source, such as a cheap laptop or some cheap professional headphone amps, or some exotic tube amps. There’s effectively no difference. 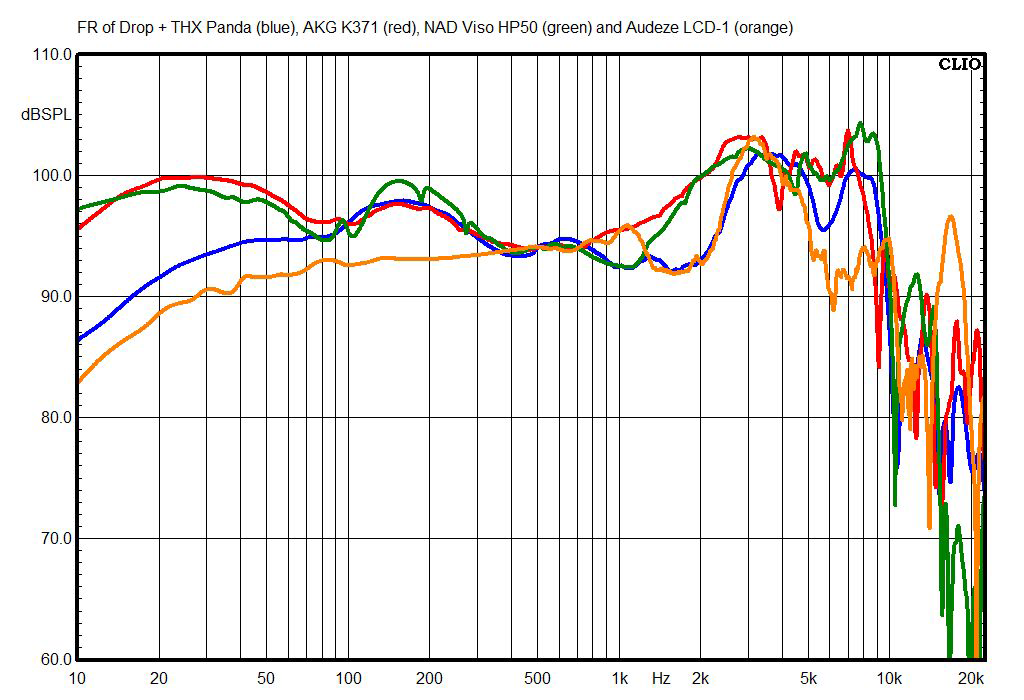 This chart shows the Pandas’ right-channel response compared with several other good closed-back headphones and with the Audeze LCD-1s, planar-magnetic, open-back headphones that are the same price as the Pandas. Except for having less bass and less energy around 2kHz than the closed-back models, there’s nothing particularly unusual about this response. By the way, the red trace shows the AKG K371 headphones, which conform closely to the so-called “Harman curve.” 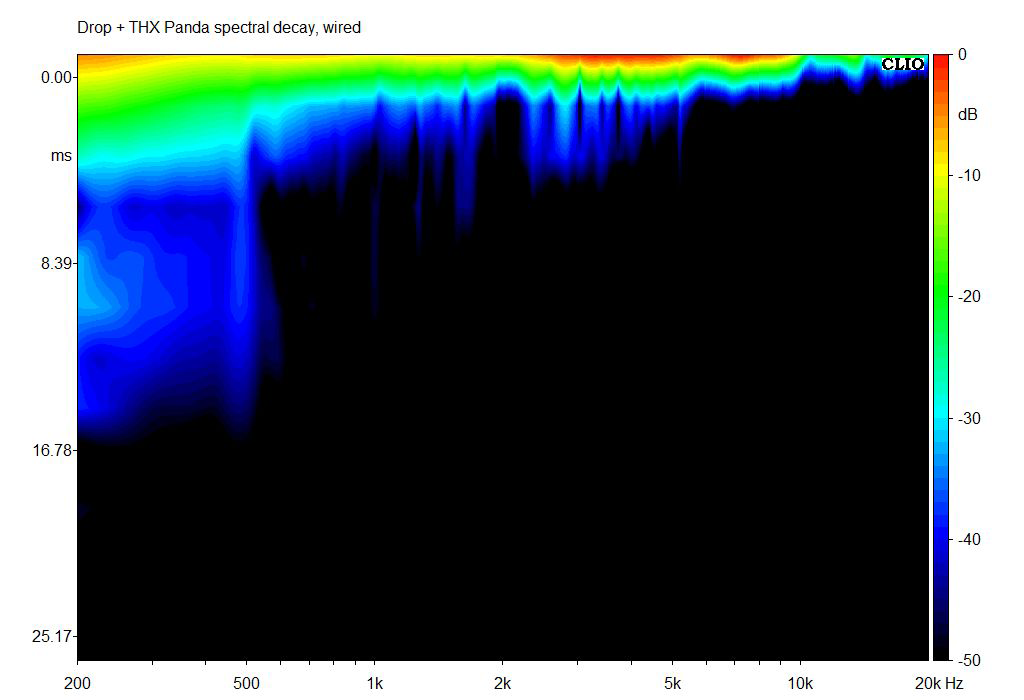 The Pandas’ spectral-decay (waterfall) chart shows that these are planar-magnetic headphones, because of the many narrow resonances between 1.5 and 5kHz. However, these are far better damped than in any planar magnetics I can remember measuring. I’m not sure if these would occur for an actual listener; I’m told they’re due to reflections between the large, flat driver and the cheek plate of the G.R.A.S. 43AG. 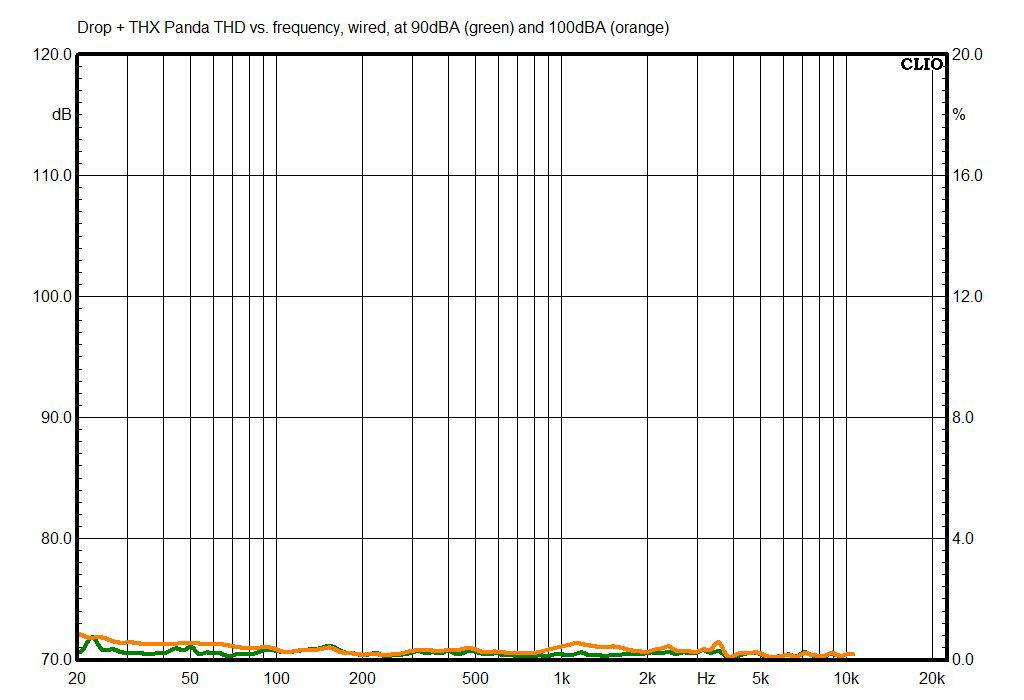 The total harmonic distortion of the Pandas in wired mode is negligible: only 2% at 20Hz even at dangerously loud listening levels. 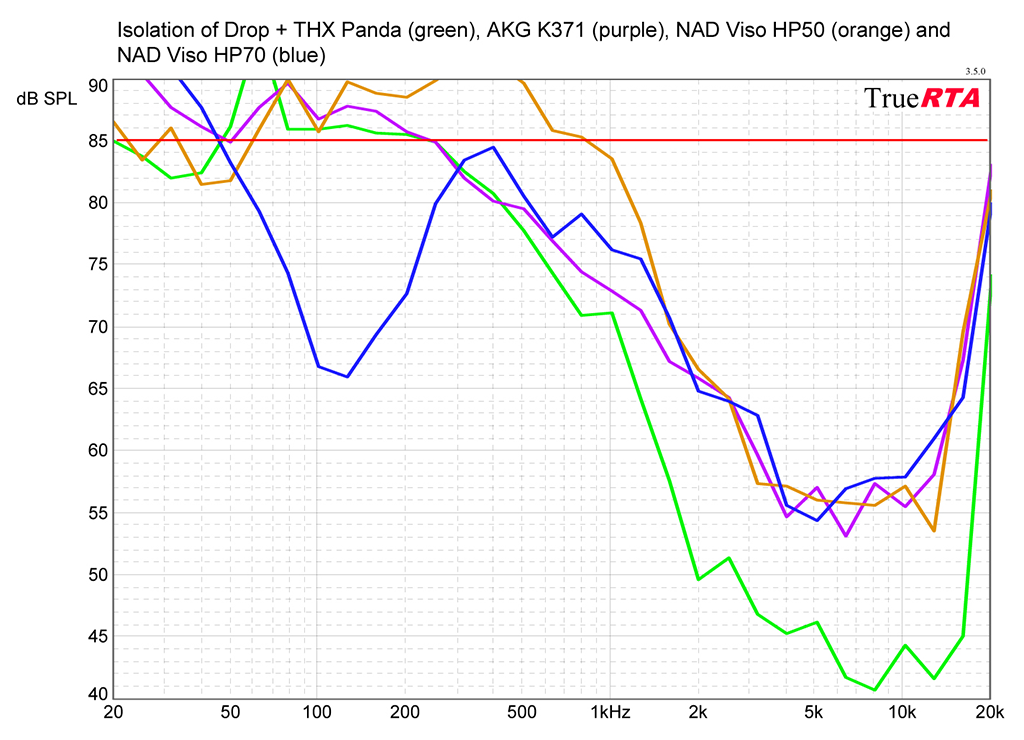 In this chart, the external noise level is 85dB SPL, and numbers below that indicate the degree of attenuation of outside sounds. The lower the lines, the better the isolation. The isolation of the Pandas is outstanding for passive headphones. Above 500Hz the Pandas clearly deliver superior isolation; positioning of the headphones on the ear/cheek simulator can affect these results, but when you see one model providing 9 to 14dB more isolation at mid and high frequencies, clearly they’re doing something right. I also included a noise-canceling model, the NAD Viso HP70s, so you can see how typical noise-canceling headphones would perform differently on this test. 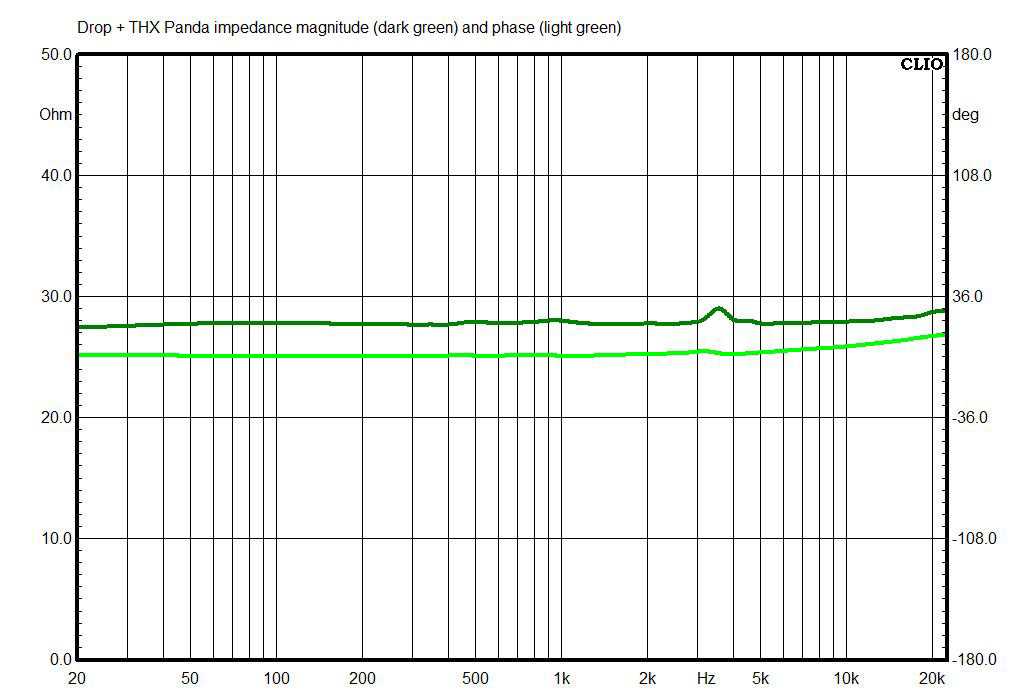 The impedance magnitude of the Pandas in wired mode is almost dead-flat at 27.5 ohms, and the phase response is similarly flat.

Sensitivity of the Pandas in wired mode, measured between 300Hz and 3kHz, using a 1mW signal calculated for 26-ohms rated impedance, is 97.7dB. That’s somewhat low; you may or may not get satisfying volume if you plug them into a cheap smartphone or an inflight entertainment system.