I measured the Cupid earphones using laboratory-grade equipment: a G.R.A.S. Model 43AG ear/cheek simulator/RA0402 ear simulator with KB5000/KB5001 simulated pinnae, and a Clio 10 FW audio analyzer. For isolation measurements, I used an M-Audio Mobile Pre USB interface and TrueRTA spectrum-analyzer software. The earphones were amplified using a Musical Fidelity V-CAN. Except as noted, all measurements were made using medium-sized, single-flange silicone eartips, as these fit the ear/cheek simulator best. These are “flat” measurements; no diffuse-field or free-field compensation curve was employed. If you’d like to learn more about what our measurements mean, click here. 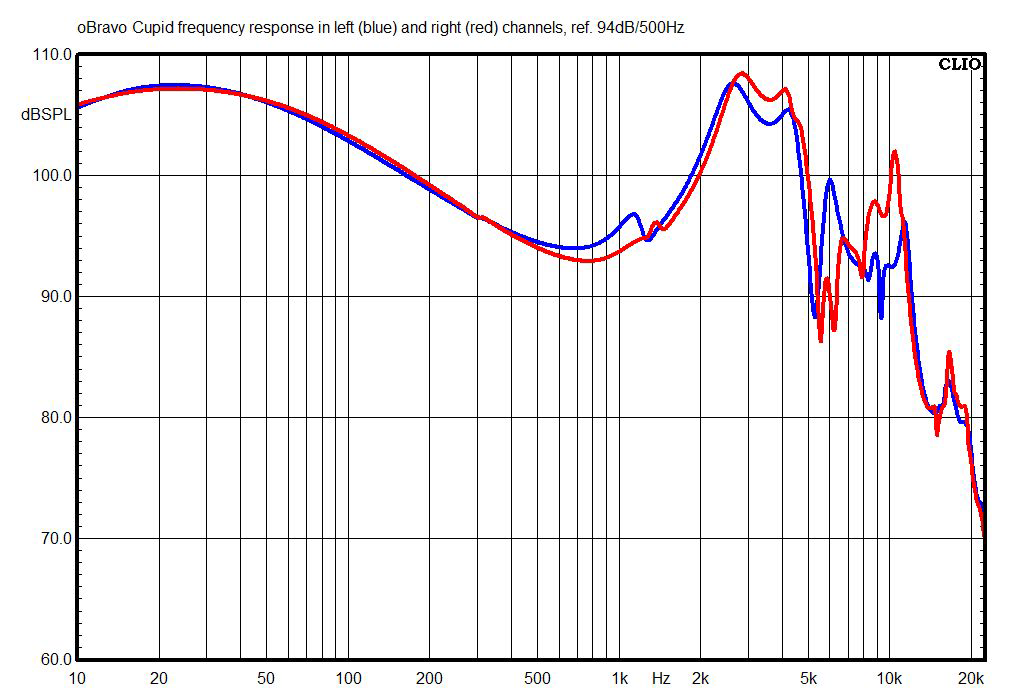 The above chart shows the Cupid earphones’ frequency response. There’s a strong bass bump below about 150Hz, and a very strong lower-treble peak between about 2.3 and 4.6kHz. But there’s not a lot of energy in the mid-treble, between about 5 and 10kHz. 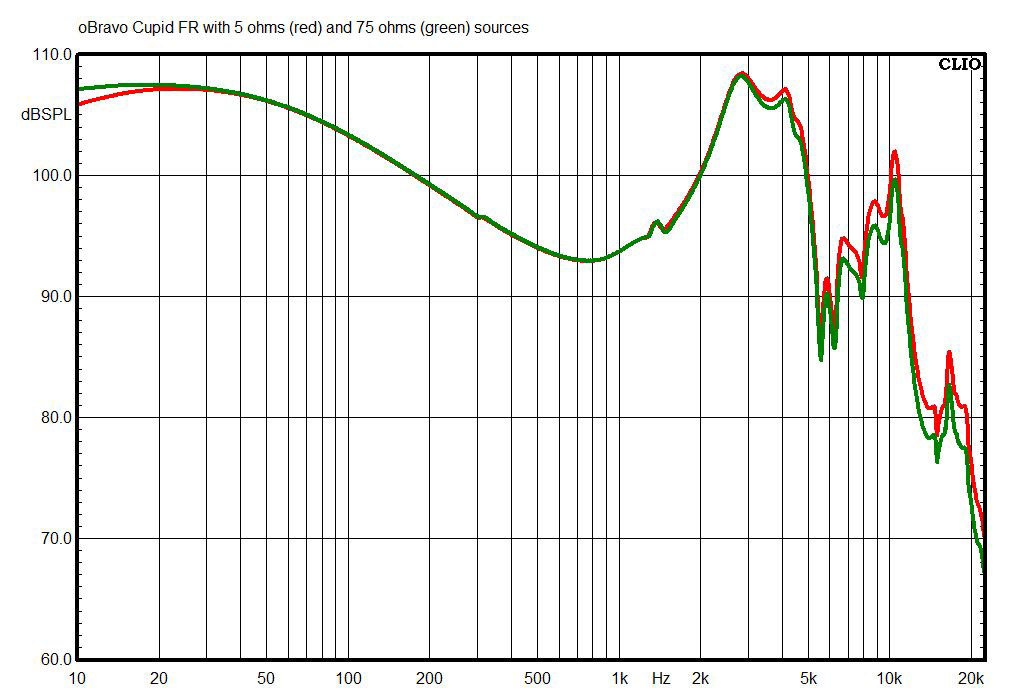 This chart shows how the Cupids’ tonal balance changes when they’re used with a high-impedance (75 ohms) source, such as a cheap laptop or some cheap professional headphone amps, or some exotic tube amps. With the high-impedance source, the sound mellows out slightly; the treble is reduced by 1 to 2dB, which in this case would probably be a good thing. 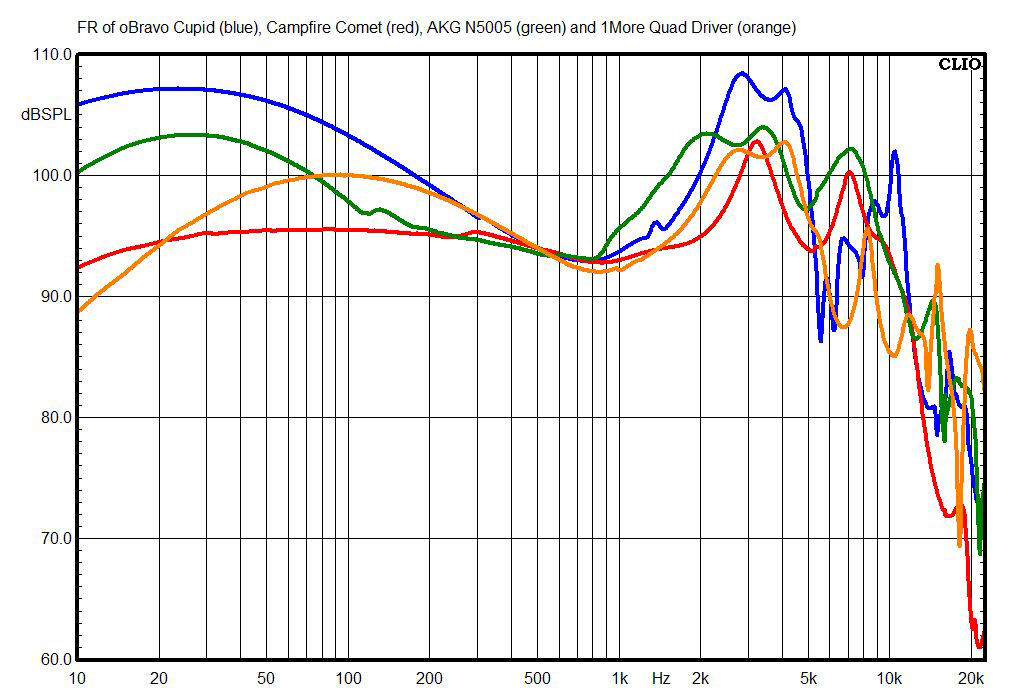 This chart shows the Cupids’ right-channel response compared with a couple of comparably priced audiophile-oriented earphones, as well as the AKG N5005 earphones, which when used with their reference filter are the earphones said to best conform to the Harman curve, the response that research shows delivers what most listeners consider the most natural sound. You can see how “smiley” the Cupids’ response is relative to the others, with substantially boosted bass and lower treble -- or recessed midrange, if you prefer to look at it that way. 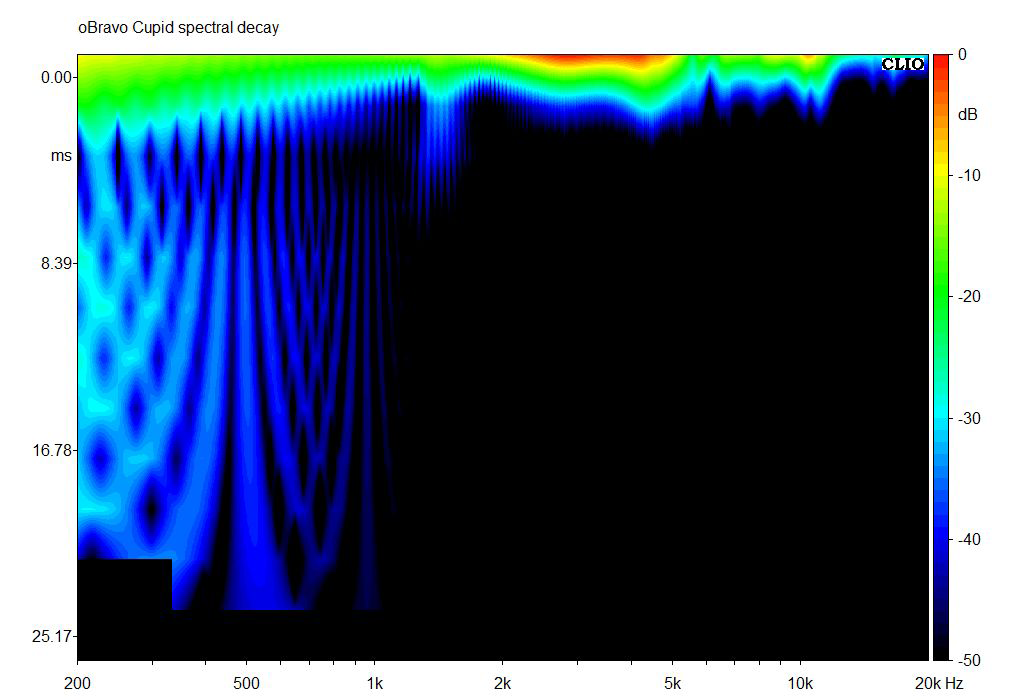 The Cupids’ spectral decay (waterfall) chart looks generally pretty clean except for a resonance around 1.4kHz. It’s pretty well-damped, dying out within 5ms, but it does correspond with . . . 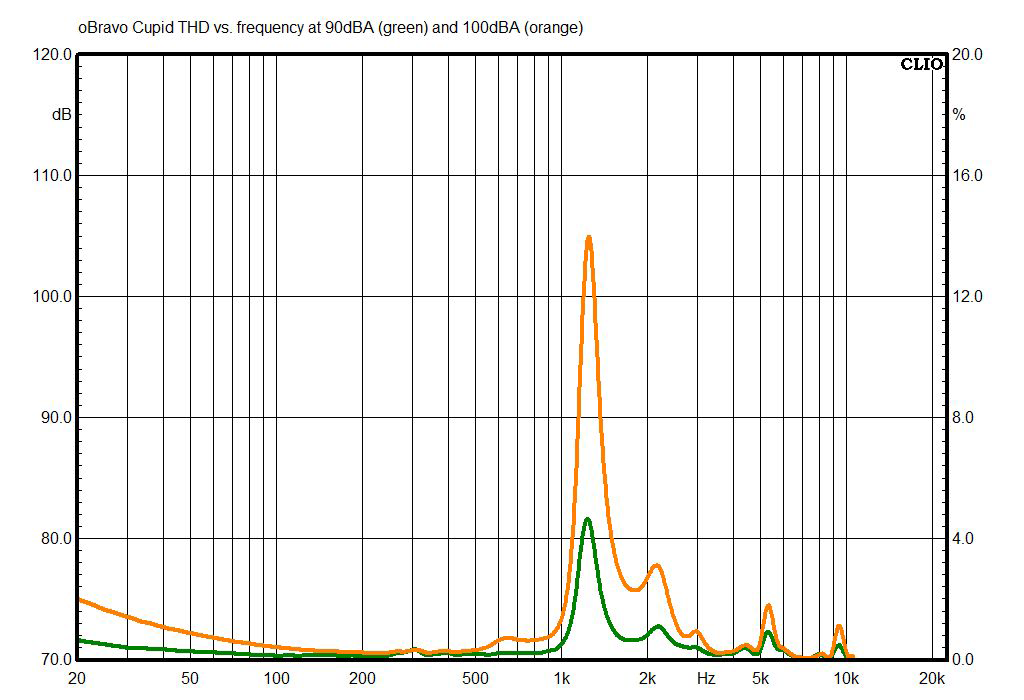 . . . the large distortion peak seen in the total harmonic distortion versus output level measurement. Readers who’ve perused my past measurements may have noticed that I tend to pooh-pooh mild distortion of a couple percent in transducers, especially at high listening levels, but here we’re talking about distortion of roughly 5% at the fairly loud listening level of 90dBA, and about 13.5% at the extremely loud level of 100dBA. Gradual rises in distortion below 100Hz at high levels are common in earphones, but I can’t recall having seen large distortion peaks like this in the midrange. Note that I measured normal distortion levels in a different set of earphones and a set of headphones in the same listening session, within a minute or two of measuring these, and I repeated the measurement of the Cupids after checking and resetting the levels, but got the same results. I have to wonder if this is the cause of the midrange “muddiness” we noted, in conjunction with the low output in the midrange relative to the bass and treble. 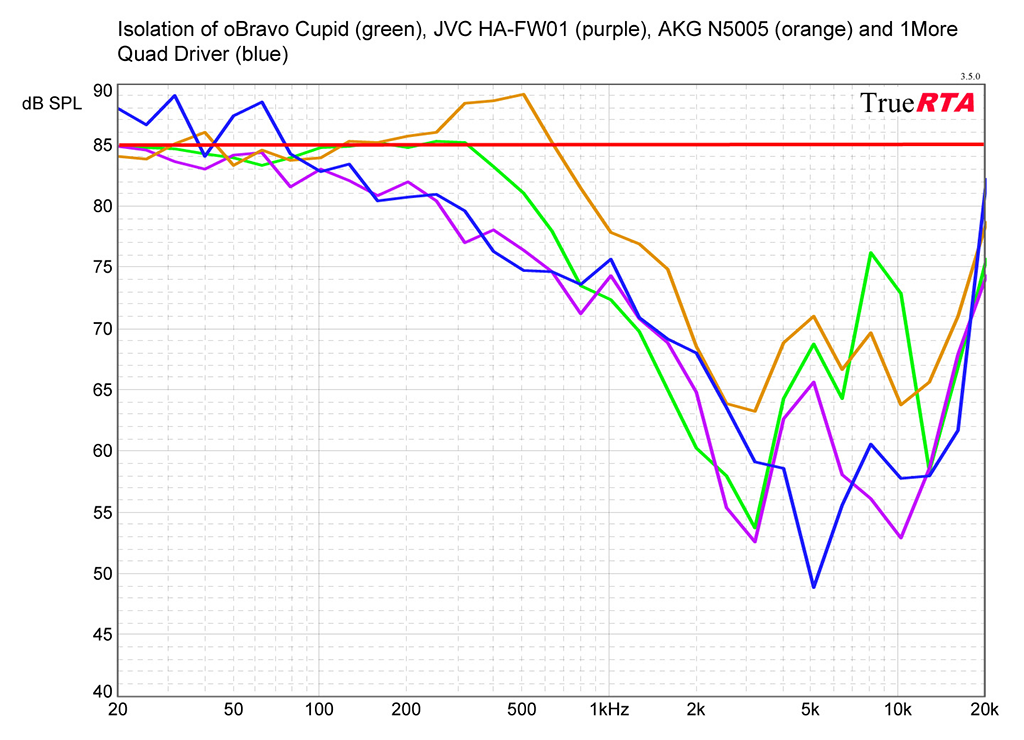 This chart is produced by playing 85dB SPL pink noise through four speakers plus a subwoofer, “flatlining” the response at the ear/cheek simulator at 85dB, then inserting the earphones and observing the reduction in noise reaching the simulator’s internal microphone. As you can see, the Cupids’ provide an average amount of noise isolation compared with some similar models. 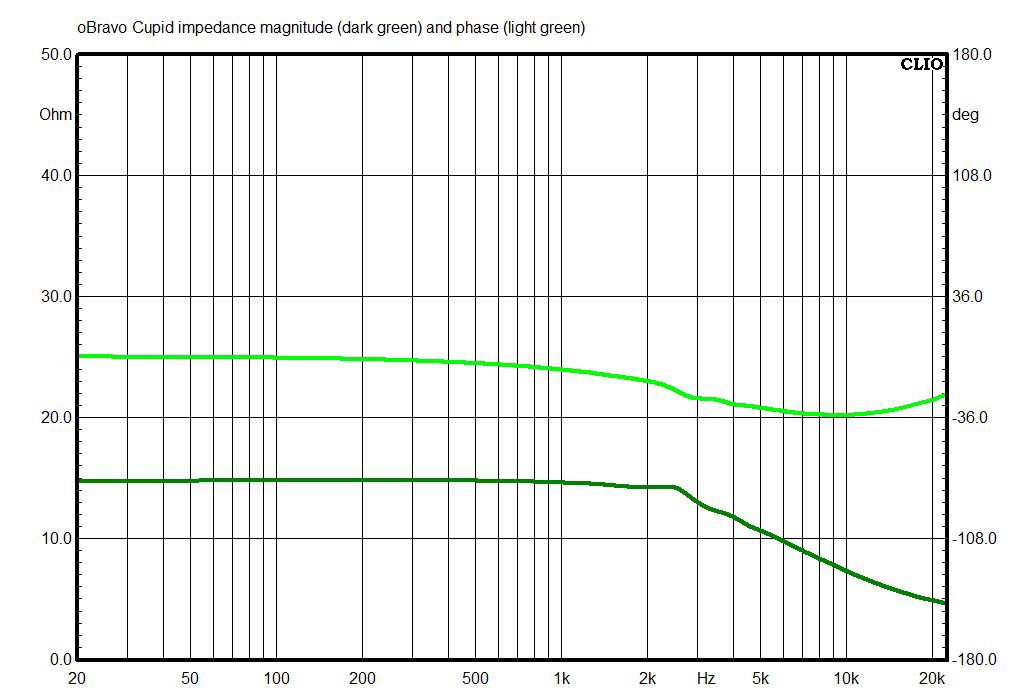 The impedance magnitude of the Cupids is unusual, running almost dead-flat at 15 ohms up to 2.5kHz, then dropping abruptly at higher frequencies, to a low of about 5 ohms at 20Hz. This strikes me as particularly strange because the planar-magnetic driver is said to function as a tweeter, yet all the planar-magnetic drivers I can remember measuring had effectively a resistive (i.e., flat) impedance. The phase also shifts somewhat in this frequency range.

Sensitivity of the Cupids, measured between 300Hz and 3kHz, using a 1mW signal calculated for 16-ohms rated impedance, is 103.9dB, thus the Cupids should deliver pretty good volume from any source device.