I measured the DALI IO-6 headphones using professional-grade equipment: a G.R.A.S. Model 43AG ear/cheek simulator/RA0402 ear simulator with the KB5000 and KB5001 anthropomorphic simulated pinnae, a Clio 10 FW audio analyzer, a laptop computer running TrueRTA software with an M-Audio MobilePre USB audio interface, and a Musical Fidelity V-CAN amp. For measurements in Bluetooth mode, I used an MEE Audio Connect Bluetooth transmitter to get the signal to the headphones. These are “flat” measurements; no diffuse-field or free-field compensation curve was employed. 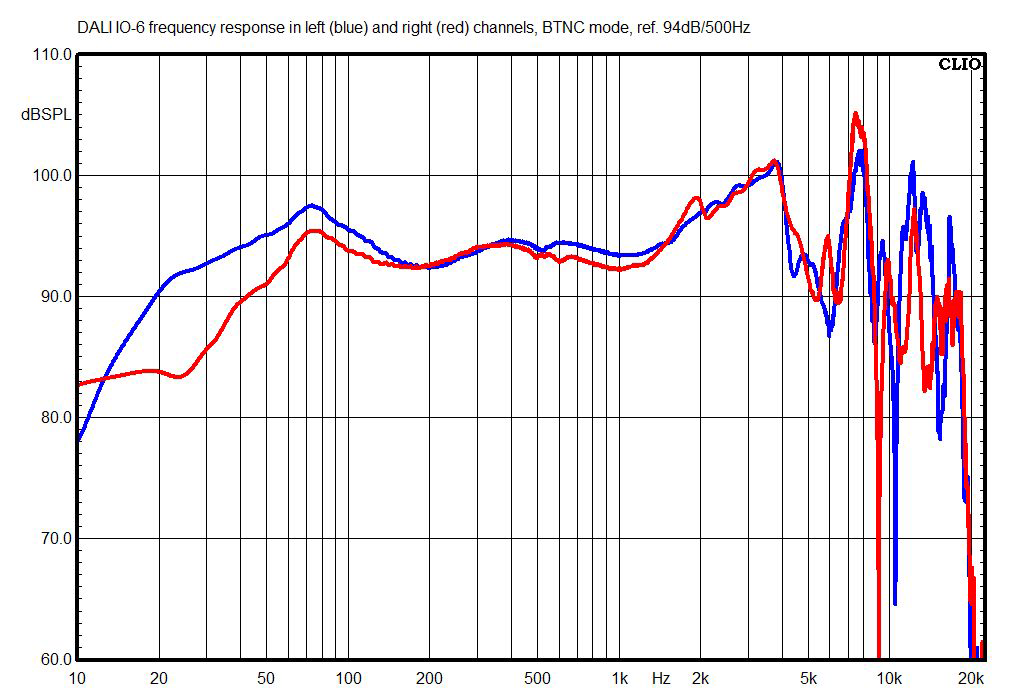 The above chart shows the IO-6es’ frequency response measured in what I expect will be the headphones’ most-used mode: Bluetooth with noise canceling on. This curve is fairly normal in that there’s a modest bass bump below 150Hz, and strong output between 2 and 4kHz corresponding with the primary canal resonance of the average human ear (and the RA0402 ear simulator). What’s unusual is the strength of the peak at about 7.5kHz; we often see a response peak here, but usually it’s about 5dB down from the peak between 2 and 4kHz. 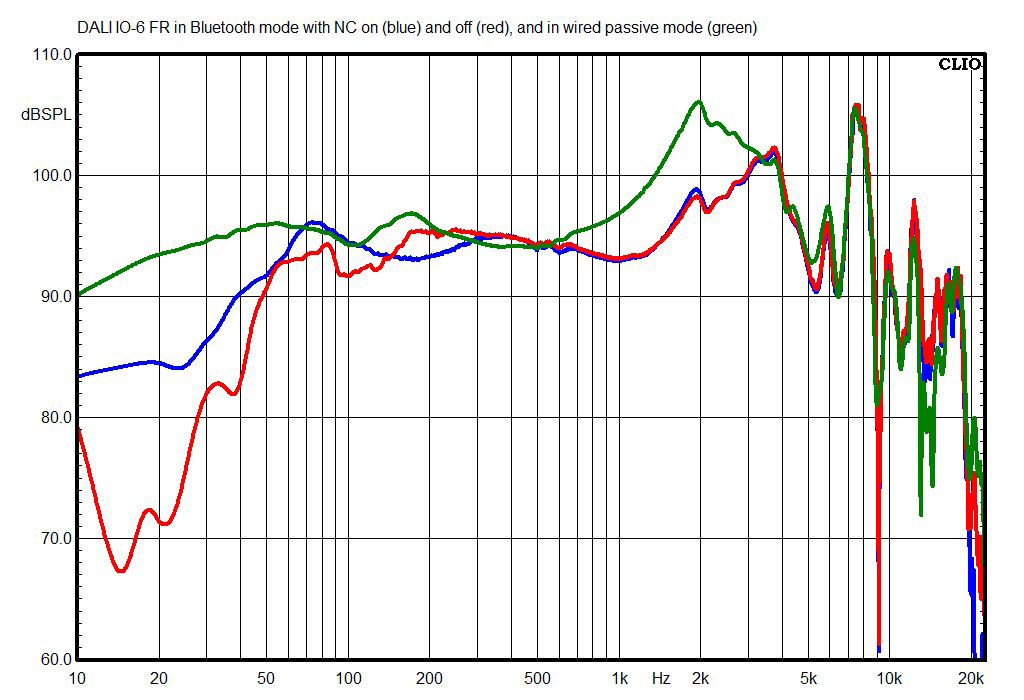 Here you can see the difference in response when the IO-6es are used in Bluetooth mode with NC on and off, and in wired mode with the power off. There’s only a mild difference in bass response when you turn NC on and off, and although it’s not shown here, the “transparency” mode has effectively the same frequency response as the NC off mode. Wired mode has a much stronger peak at 2kHz than any active mode, which means these will sound somewhat bright if used in passive mode. 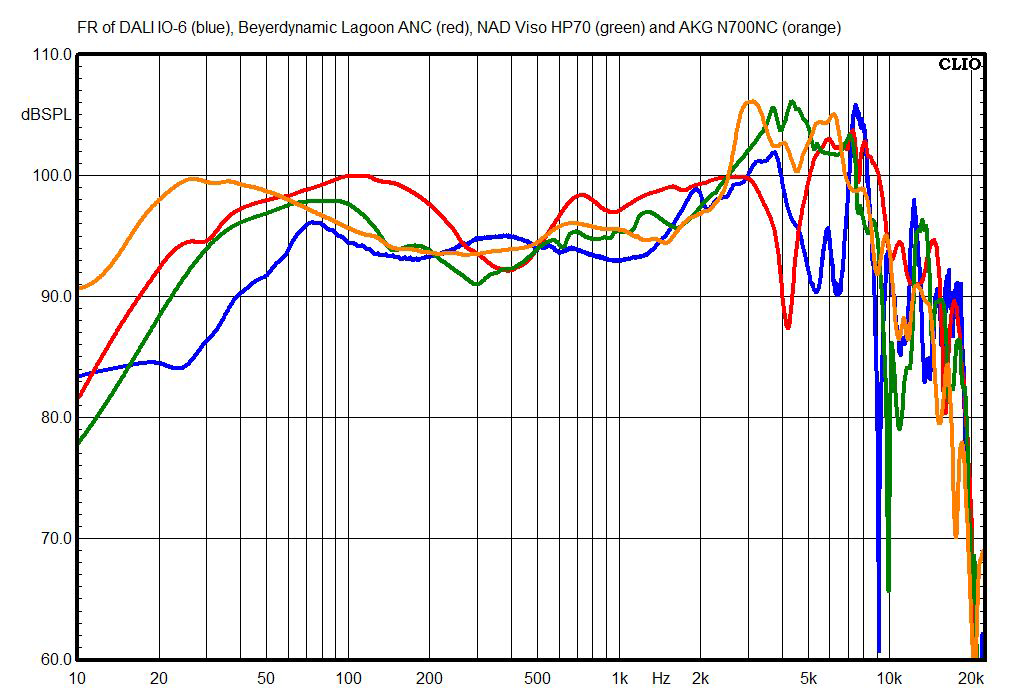 This graph shows the response of the IO-6es compared with similar headphones (the Beyerdynamic Lagoon ANC, NAD Viso NP70, and the AKG N700NC models, which conform closely to the Harman curve). All are shown in Bluetooth mode with noise canceling on. The IO-6 headphones are in the ballpark with the rest, but have the flattest overall response -- except for that big peak centered at 7.5kHz. That could make them sound a little brighter, and should also give the impression of greater treble detail and “air.” 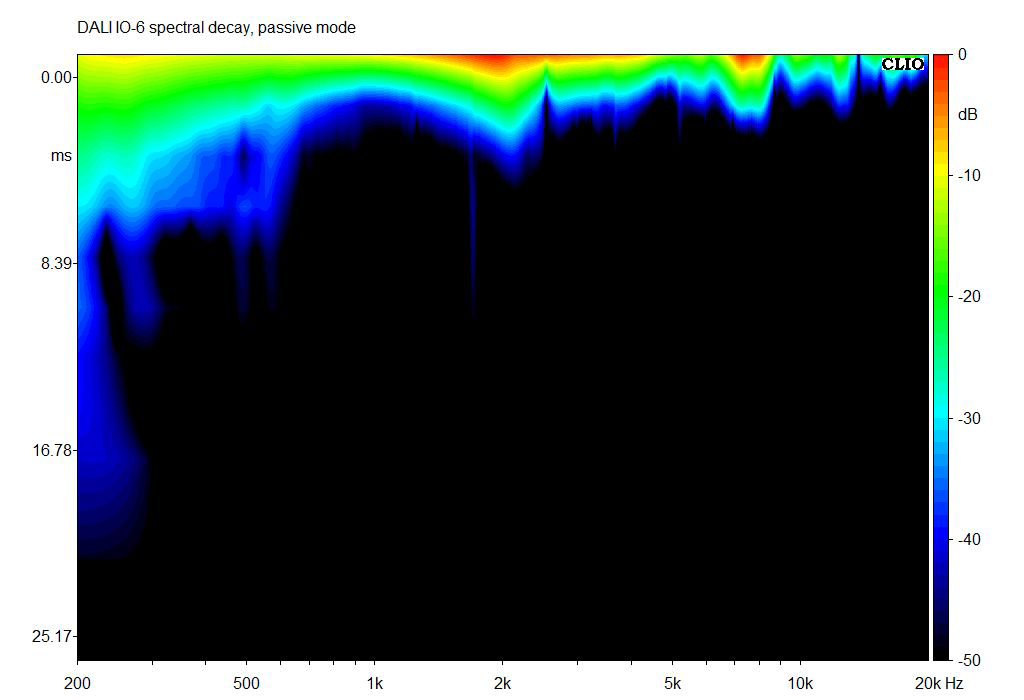 The IO-6 headphones’ spectral decay (waterfall) chart -- measured with a wired connection because of Bluetooth’s latency, and in passive mode (i.e., power off) -- looks very clean, indicating there are no significant resonances. 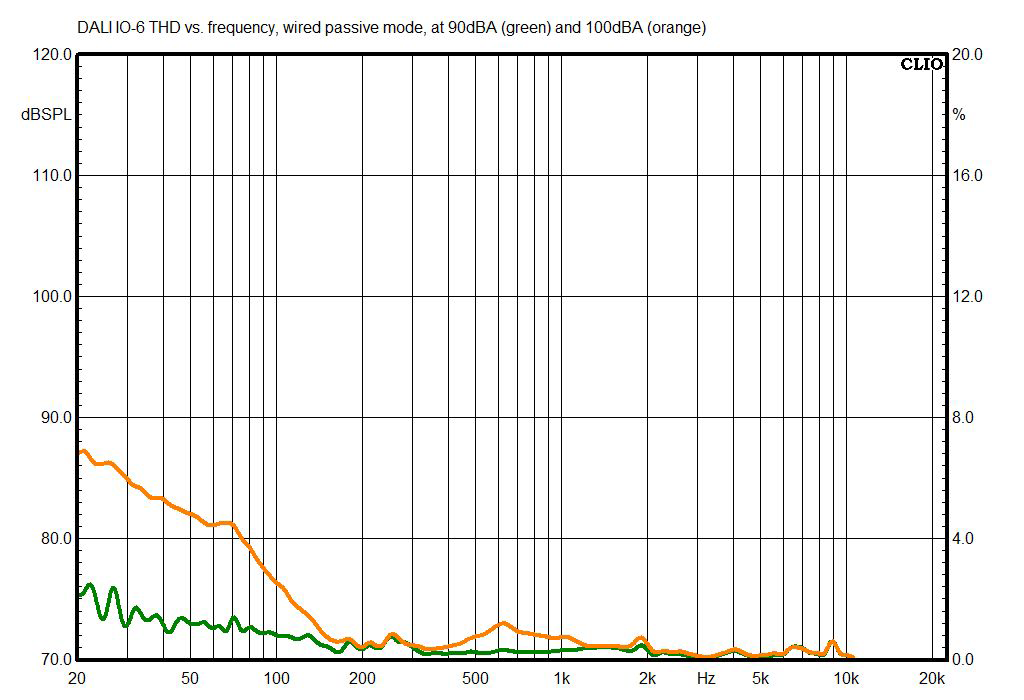 The IO-6es’ distortion is measured here with a wired connection in passive mode (power off); the internal amps of the headphones may add some distortion, but my analyzer can’t compensate for Bluetooth’s latency (or even with the roughly 30ms of latency of active wired mode) when doing distortion measurements. The distortion is trivial at 90dBA. At 100dBA, it rises to about 5% at 50Hz, which suggests that if you crank these to extremely loud listening levels, the bass might get a little wooly (but so will your hearing after a few minutes of such abuse). 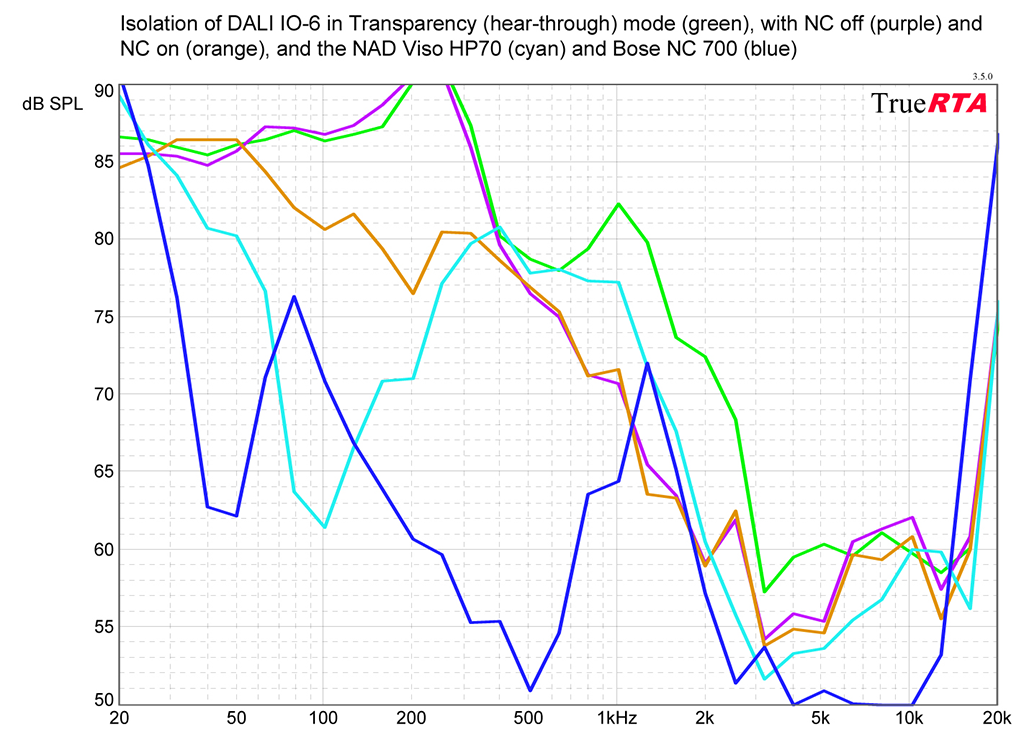 In this chart, the external noise level is 85dB SPL, and numbers below that indicate the degree of attenuation of outside sounds. The IO-6es’ passive isolation, above about 500Hz, is good, but the noise canceling in “airplane band” below that is modest -- about 5dB on average, which is competitive with the Beyerdynamic Lagoon ANCs but nothing like the noise canceling achieved by the class-leading Bose NC 700s (shown here with NC set to maximum) or the NAD Viso HP70s. If noise canceling is a priority for you -- if you want near-silence when you put on your headphones during a flight -- the IO-6es aren’t your best choice. 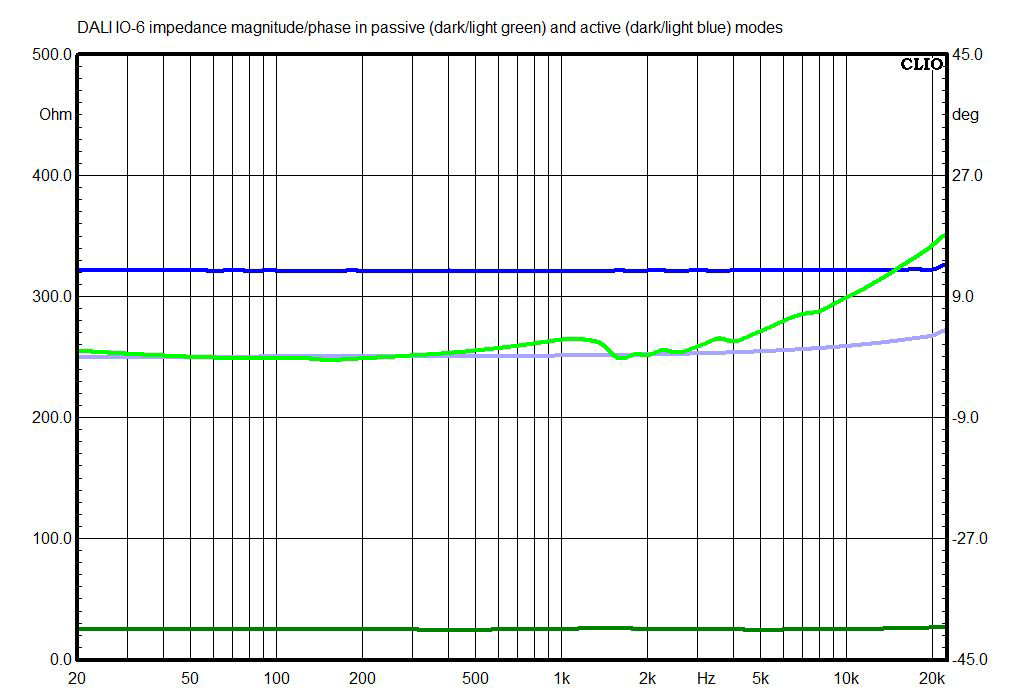 The IO-6 headphones’ impedance magnitude measurement is just about dead flat in active mode or passive, averaging 320 ohms in the former and 25 ohms in the latter. Phase in both modes is also nearly flat. This suggests that the sound of the headphones won’t change with the output impedance of the source device.

Bluetooth latency of the IO-6 headphones used with the MEE Audio Connect transmitter was 218ms. This surprises me, as the transmitter and the headphones are both equipped with aptX, and typical aptX latency is around 110ms. So if your video display has low latency, you may notice some lip sync errors when using the IO-6es while watching videos. Sensitivity of the IO-6es in passive mode, measured between 300Hz and 3kHz using a 1mW signal calculated for the rated 25-ohms impedance, is 101.5dB, so if the batteries run down and you have to use a wired connection, they should play fairly loud.