I measured the TWS600 earphones using laboratory-grade equipment: a G.R.A.S. Model 43AG ear/cheek simulator/RA0402 ear simulator with KB5000/KB5001 simulated pinnae, and a Clio 10 FW audio analyzer. For isolation measurements, I used a laptop computer running TrueRTA software with an M-Audio MobilePre USB audio interface. A MEE Audio Connect Bluetooth transmitter was used to send signals from the Clio 10 FW to the earphones. These are “flat” measurements; no diffuse-field or free-field compensation curve was employed. Note that because of the latency introduced by Bluetooth, I wasn’t able to do a spectral decay measurement, and of course my usual impedance and sensitivity measurements are irrelevant for wireless earphones. If you’d like to learn more about what our measurements mean, click here. 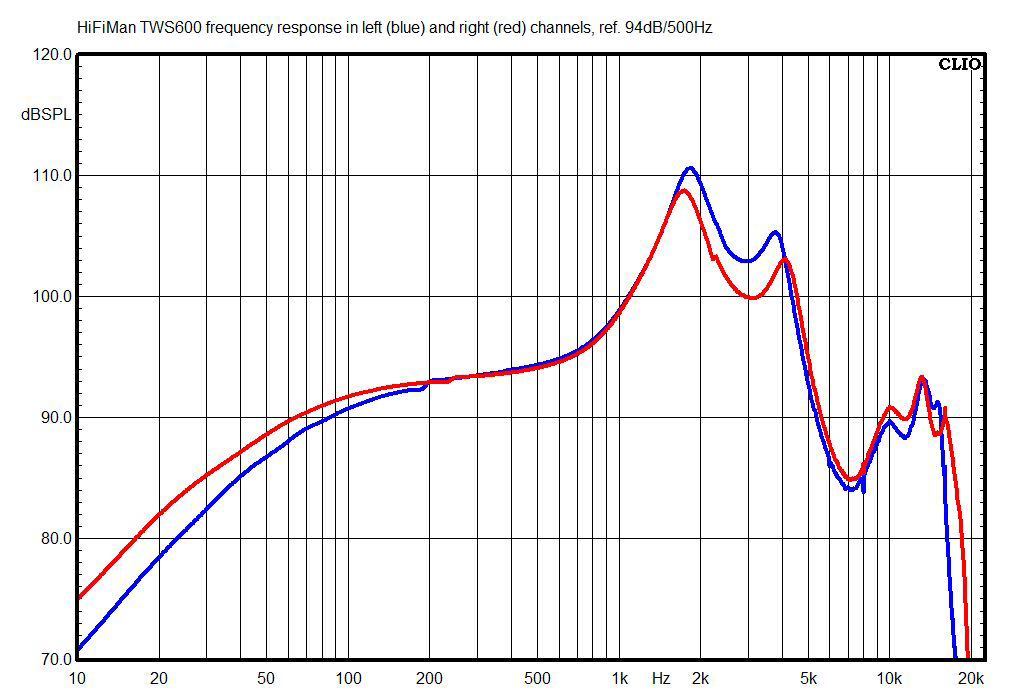 The above chart shows the TWS600s’ frequency response measured with the KB5000 and KB5001 anthropomorphic simulated pinnae. You’ll note right away that the mids and lower treble are super-strong, and there’s not much bass. I worried that this might be an artifact due to Bluetooth latency, so I ran the same measurement using pink noise and a real-time analyzer, and compared that measurement with similar ones I’ve taken of other earphones with a subjectively flatter response, and it appears that the curve you see here is representative. Moving up from the bass, if the peaks you see in the 1.8kHz and 4kHz ranges were shifted up by about half an octave, to about 2.8 and 5.3kHz, and there were more bass, these earphones would have a “normal” response. As it is, the relatively low frequency of the 1.8kHz peak is what gives these earphones their strong midrange emphasis. Note also that output between about 5 and 12kHz is low relative to the 1.8kHz peak.

The impulse response shows that the latency with the MEE Audio Connect is 260ms. This isn’t bad for true wireless earphones; the Cambridge Audio Melomania 1 earphones measured 320ms. In my opinion, though, it’s not a low-enough figure to justify the claim of low latency that HiFiMan makes on the TWS600 web page, and it will create lip-sync problems with video content and will create lag problems when playing some video games. 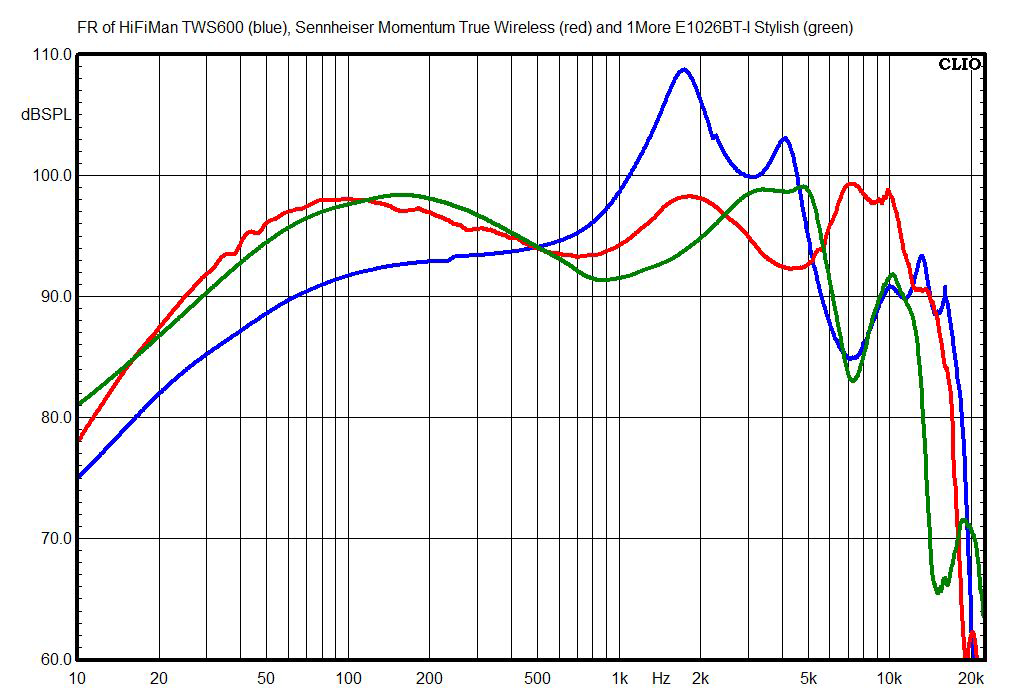 This chart shows the TWS600s’ right-channel response compared with the 1More E1026BT-I and Sennheiser Momentum True Wireless earphones. Obviously, the response curve of the TWS600s is anomalous; the others are much flatter. 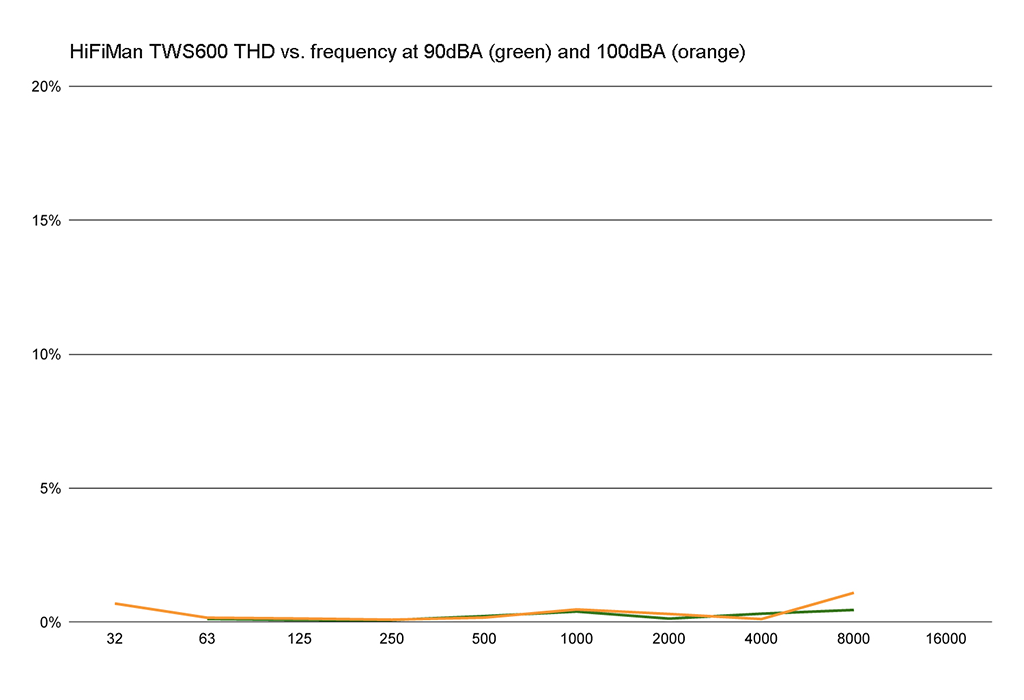 Because of the latency of the Bluetooth connection, I could not use Clio’s sine sweep function to measure total harmonic distortion (THD) versus frequency, so I did discrete THD measurements of sine tones in one-octave steps. This is a little more demanding than a swept tone because the tones have to play longer and the voice coil in the driver gets a lot hotter. Note that distortion is very low at all frequencies, and that the TWS600s can easily play at 100dBA -- something not true of some true wireless models. Note also that for some reason, I wasn’t able to get a valid measurement at 32Hz/90dBA. 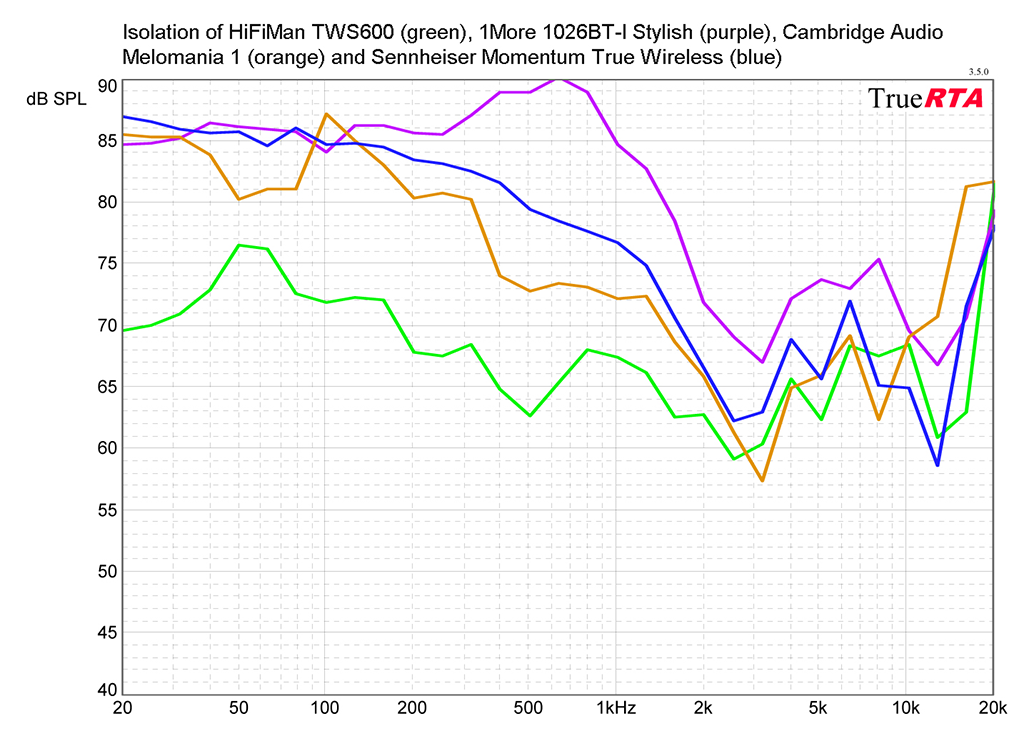 In this chart, the red line indicates an external noise level of 85dB SPL, and numbers below that indicate the degree of attenuation of outside sounds. The TWS600s’ isolation (with the medium-size, single-flange silicone tips, which gave me the best results) is well above average compared with its true wireless competitors.