I measured the Periodic Audio Carbon earphones using laboratory-grade equipment: a G.R.A.S. Model 43AG ear/cheek simulator/RA0402 ear simulator with KB5000/KB5001 simulated pinnae, and a Clio 10 FW audio analyzer. For isolation measurements, I used a laptop computer running TrueRTA software with an M-Audio MobilePre USB audio interface. The headphones were amplified using a Musical Fidelity V-CAN. Except as noted, all measurements were made using medium-sized, single-flange silicone eartips, as these fit the ear/cheek simulator best. These are “flat” measurements; no diffuse-field or free-field compensation curve was employed. If you’d like to learn more about what our measurements mean, click here. 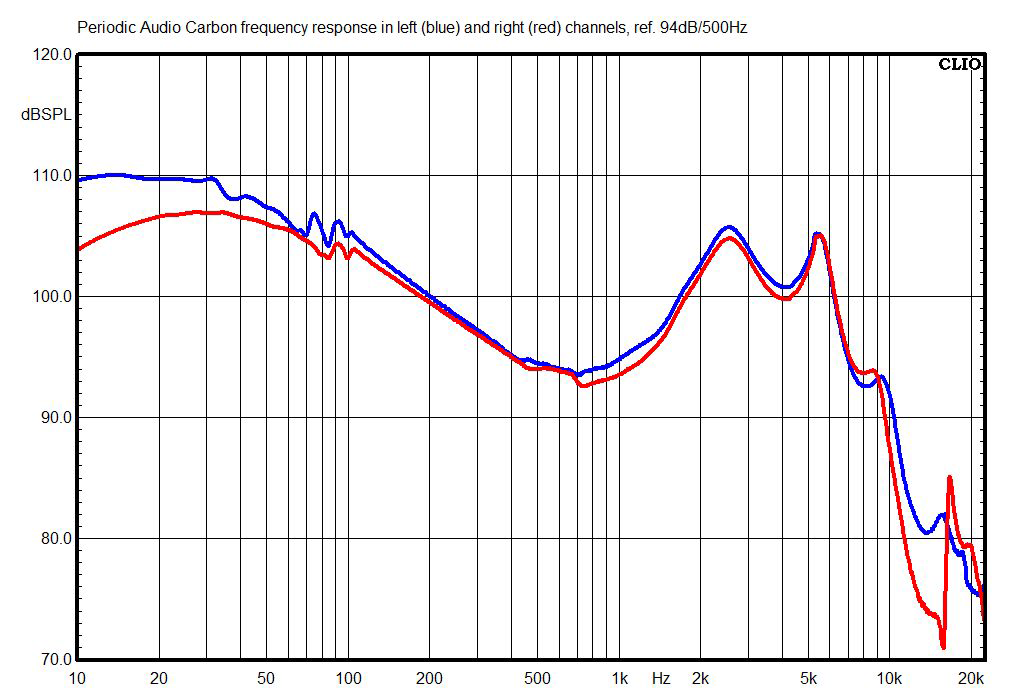 The above chart shows the Carbons’ frequency response, which in terms of the shape of the curve is fairly textbook. There’s more bass than usual, though, and a little more energy around 5.5kHz than I’m used to seeing, but all of this is still fairly close to industry norms. Incidentally, substituting one of the supplied medium-sized foam tips had very little effect on the frequency response. 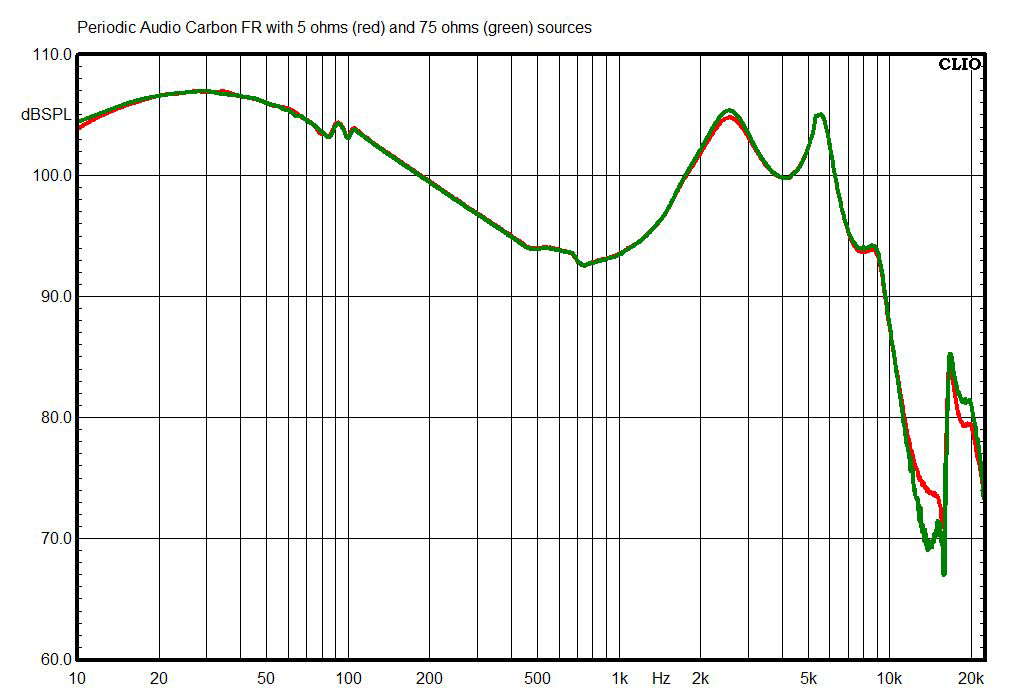 This chart shows how the Carbons’ tonal balance changes when they’re used with a high-impedance (75 ohms) source, such as a cheap laptop or some cheap professional headphone amps, or some exotic tube amps. As I usually see with earphones employing no balanced armatures, there’s very little difference in response with the high-impedance source, which means the Carbons should sound about the same no matter what you plug them into. 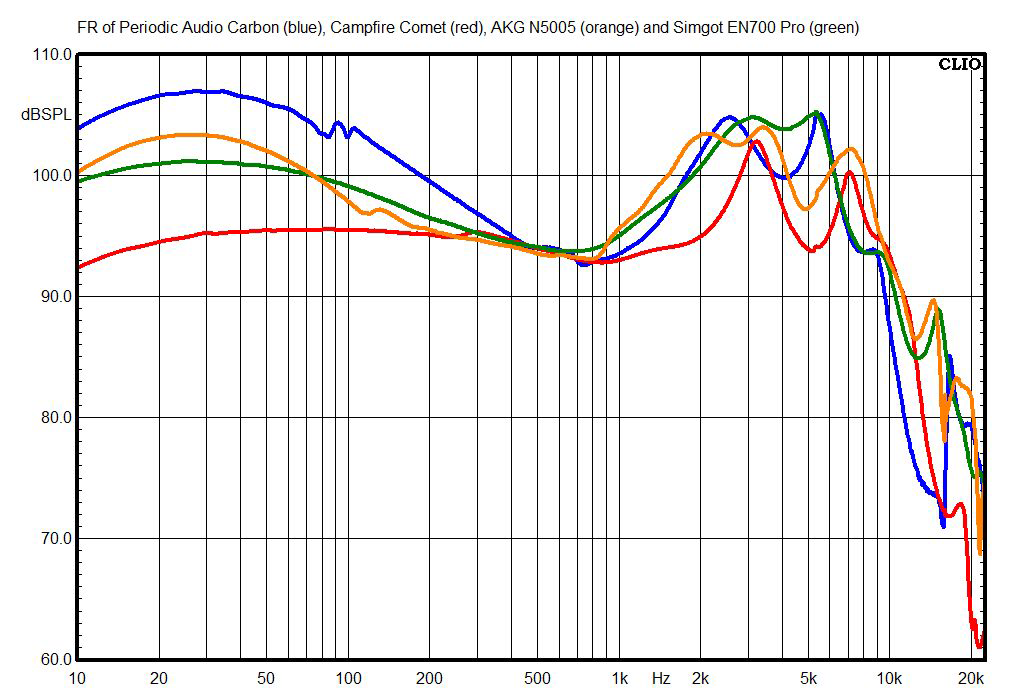 This chart shows the Carbons’ right-channel response compared with another single-dynamic-driver model, the Campfire Comets. I also included the recently reviewed Simgot EN700 Pro earphones, as well as the AKG N5005s, which, when used with their reference filter, are the earphones said to best conform to the so-called “Harman curve,” the response that research shows delivers what most listeners consider the most natural sound. Again, there’s more bass than usual, and a little more energy around 5.5kHz -- although also less around 7.5kHz, and less at higher frequencies. This might be the reason John Higgins and I described the Carbons as lacking a bit of “air” in the upper treble. 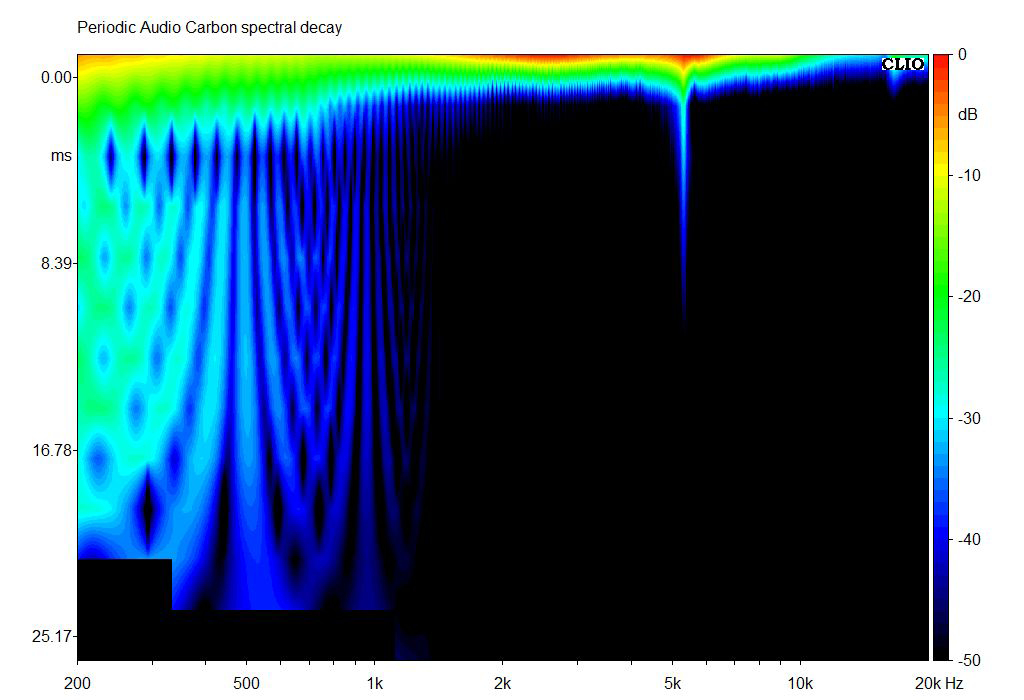 The Carbons’ spectral decay (waterfall) chart looks pretty clean, except for some resonance between 200 and 300Hz, and a very high-Q (i.e., narrow) resonance centered at about 5.2kHz. This seems to correspond with the second treble peak in the frequency response plot. 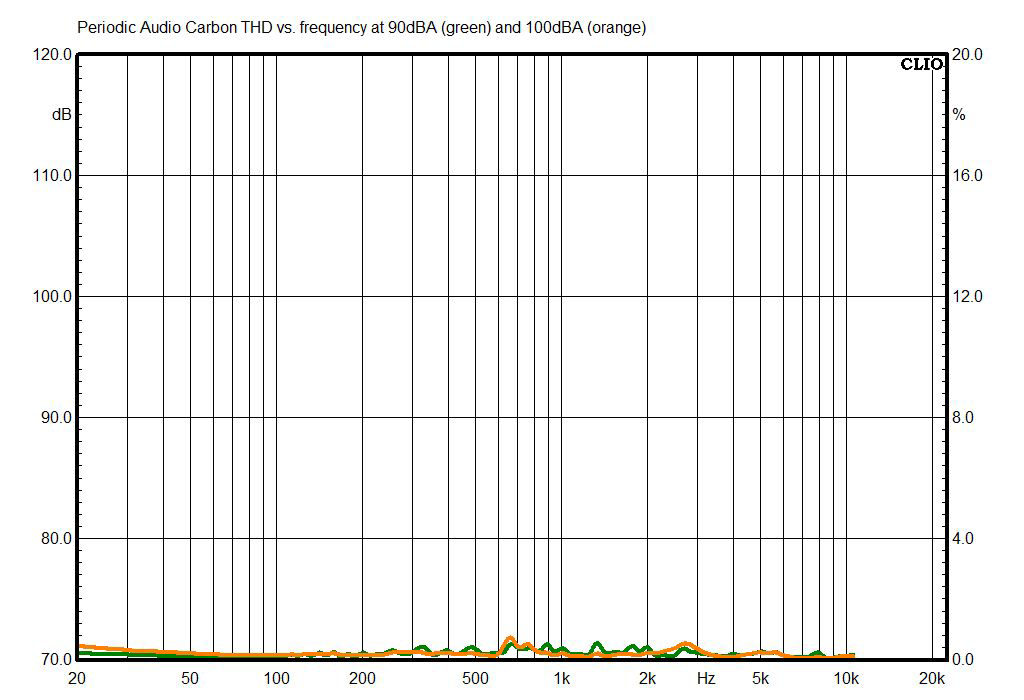 Periodic Audio’s claims about the Carbons’ ultra-low distortion seem to bear out. I can’t say with confidence that this is the lowest distortion I’ve measured, as once the distortion levels get this low, noise starts to intrude on the measurement. But I can say that the Carbons’ distortion ranks among the lowest I’ve ever measured. Without a doubt, 1% THD at 20Hz/100dBA is exceptional performance. 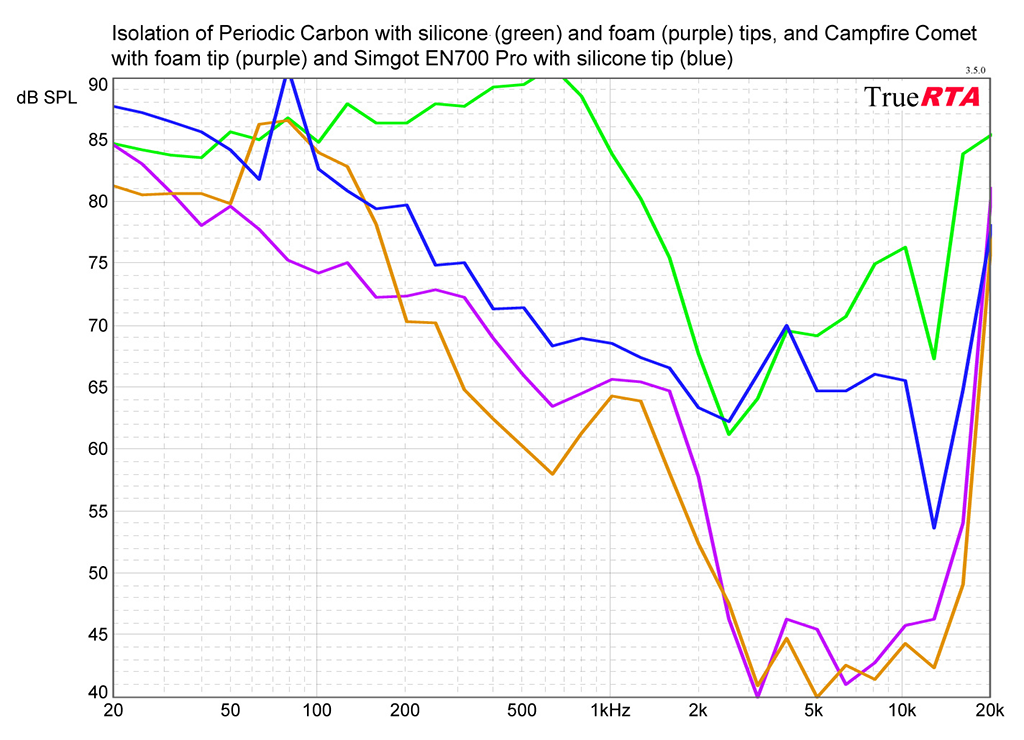 In this chart, the external noise level is 85dB SPL, and numbers below that indicate the degree of attenuation of outside sounds. Isolation of the Carbons with the silicone tips is so-so, but with the foam tips, it’s excellent. 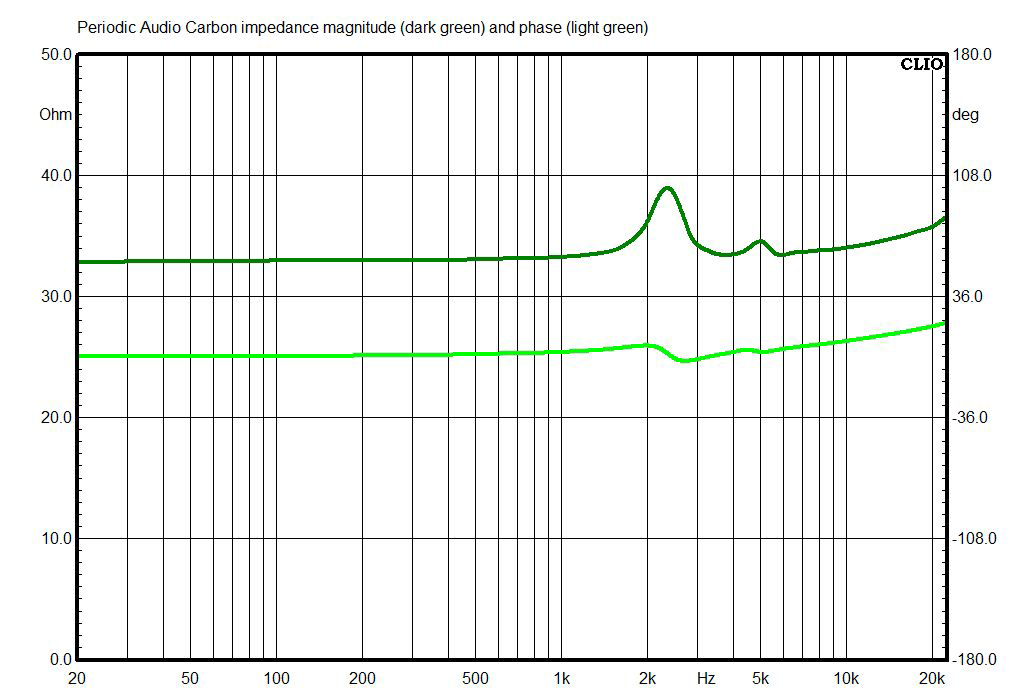 The impedance magnitude of the Carbons is largely flat, measuring about 33 ohms up to 1.5kHz, with a couple of slight impedance peaks that correspond with the frequency response peaks in the treble. Impedance phase is very close to flat.

Sensitivity of the Carbons, measured between 300Hz and 3kHz, using a 1mW signal calculated for 32 ohms-rated impedance, is 112.6dB, way higher than the rated 98dB, thus the Carbons will deliver ample volume from any source device.