I measured the Campfire Audio IO earphones using laboratory-grade equipment: a G.R.A.S. Model 43AG ear/cheek simulator/RA0402 ear simulator with KB5000/KB5001 simulated pinnae, and a Clio 10 FW audio analyzer. For isolation measurements, I used a laptop computer running TrueRTA software with an M-Audio MobilePre USB audio interface. The headphones were amplified using a Musical Fidelity V-CAN. All measurements were made using medium-sized silicone eartips, as these fit the ear/cheek simulator much better than the supplied foam tips did. These are “flat” measurements; no diffuse-field or free-field compensation curve was employed. If you’d like to learn more about what our measurements mean, click here. 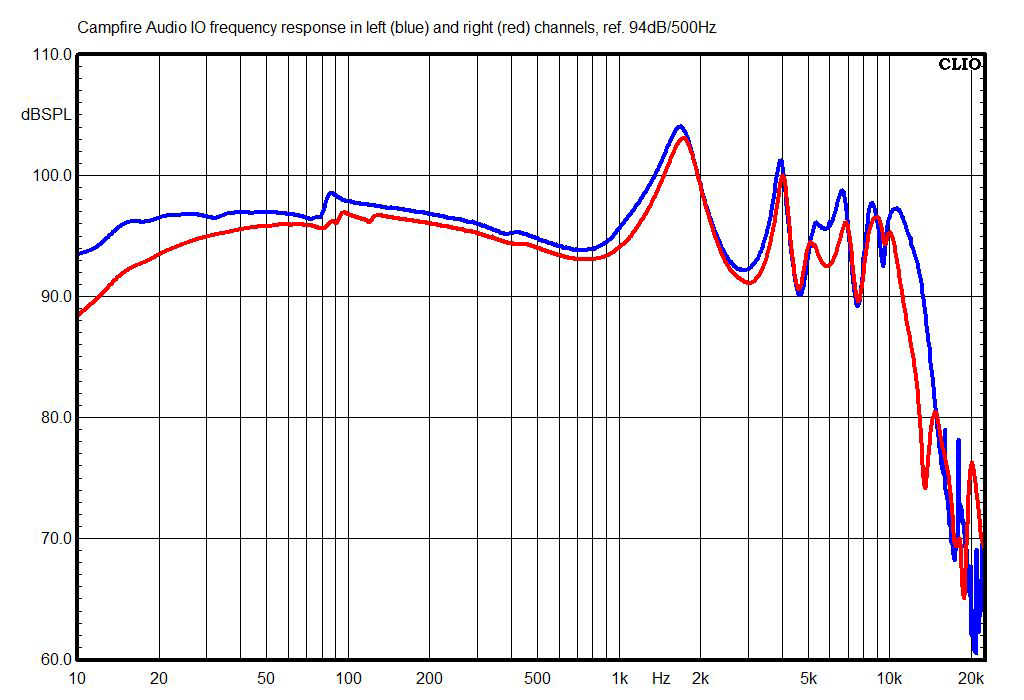 The above chart shows the IOs’ frequency response. If you pushed those peaks at 1.7 and 3.9kHz up by about 1kHz each, this would look like a very typical measurement for high-quality earphones. 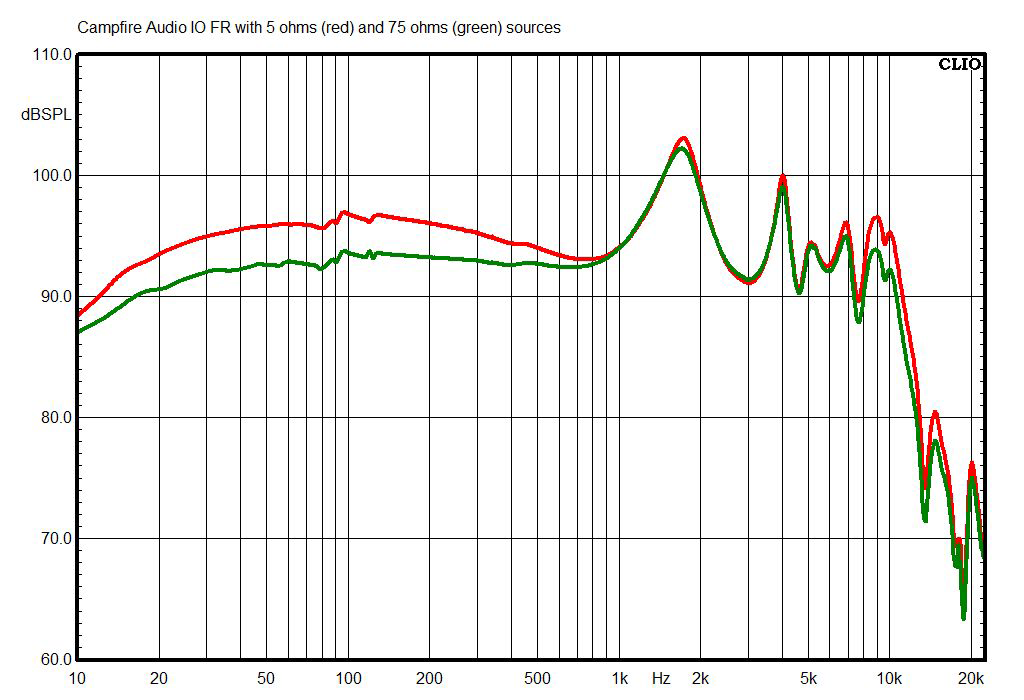 This chart shows how the IOs’ tonal balance changes when they’re used with a high-impedance (75 ohms) source, such as a cheap laptop or some cheap professional headphone amps. As usual with earphones using balanced-armature drivers, there’s a significant change in tonal balance when you switch to a source device with relatively high output impedance. In this case, a high-impedance source will give you several dB less bass and a couple dB less treble. 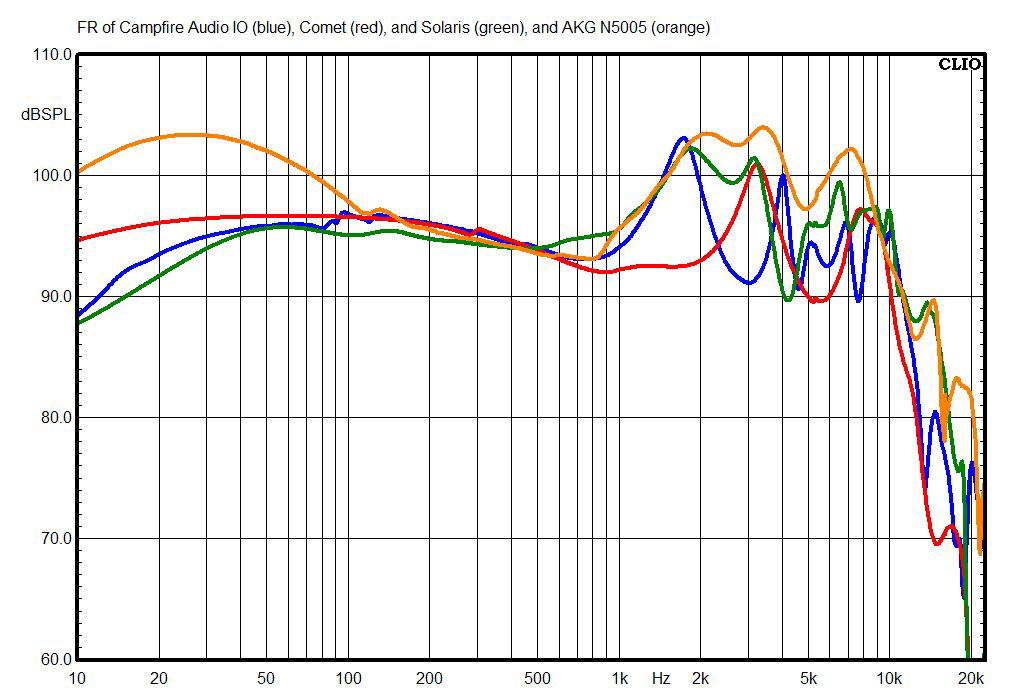 This chart shows the IOs’ right-channel response compared with two other Campfire Audio earphones: the affordable Comets and the super-high-end Solarises. I also included the AKG N5005 earphones, which when used with their reference filter are the earphones said to best conform to the so-called “Harman curve,” the response that research shows delivers what most listeners consider the most natural sound. It appears that the dip at 3kHz (the only very clear difference between the IOs and the other models) is what gives them a subjectively brighter tonal balance. 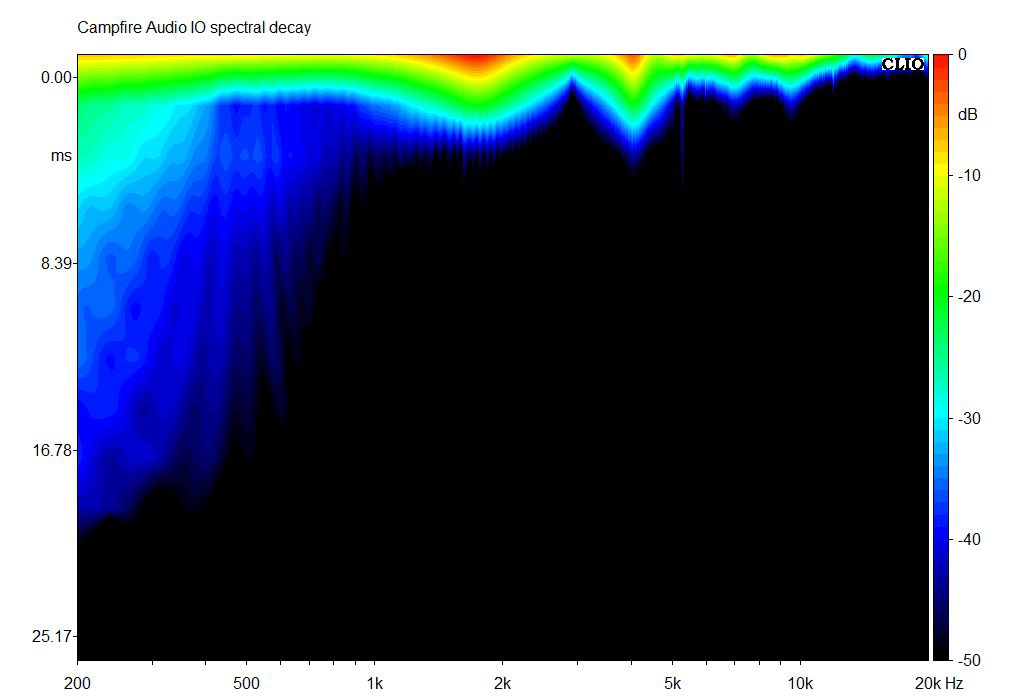 The IOs’ spectral decay (waterfall) chart shows that any resonances are well-damped and die out within a couple of milliseconds. 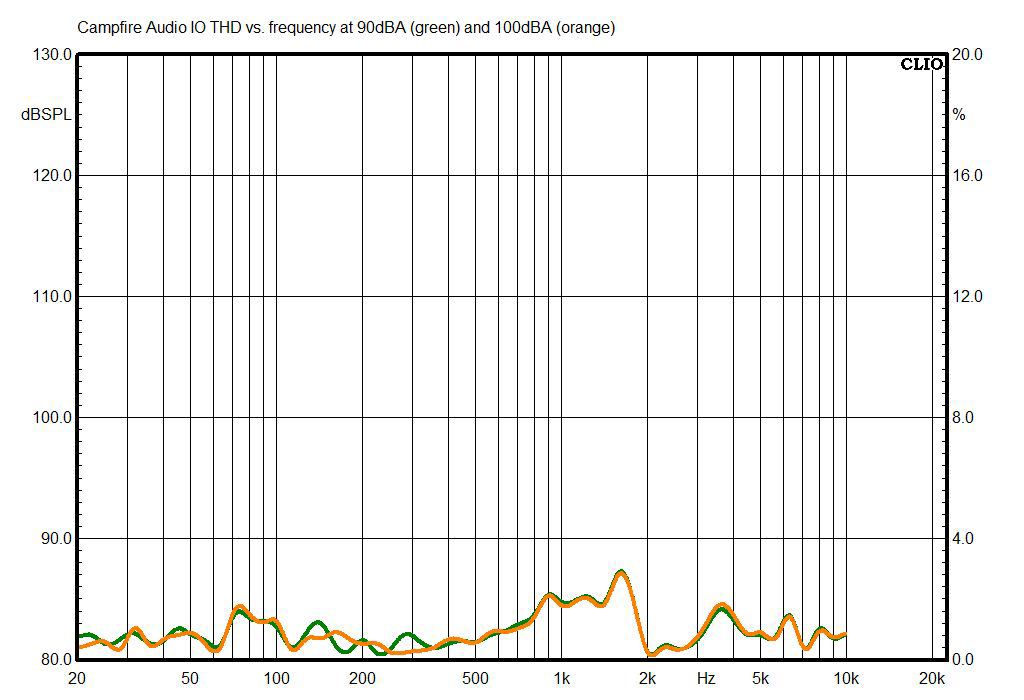 The IOs’ measured total harmonic distortion (THD) is surprising. Between 900Hz and 1.7kHz, it’s a little on the high side, at about 2%. However, the amount of distortion didn’t significantly change when I raised the level from 90dBA (which is very loud) to 100dBA (which is crazy loud). The Clio analyzer told me this is almost all second-order harmonic distortion -- which means it’s adding harmonics between 1.8 and 3.4kHz. I thought this might be spurious noise entering the measurement system, so I remeasured it a week later after a fresh setup and calibration, but I got the same result, and a check with a real-time spectrum analyzer told me there was no unusual noise in the room. I’m not sure if you’d notice this distortion, because 2% isn’t much for an audio transducer, but it is right in the most sensitive range of the human ear, so it might be an issue with some recordings. 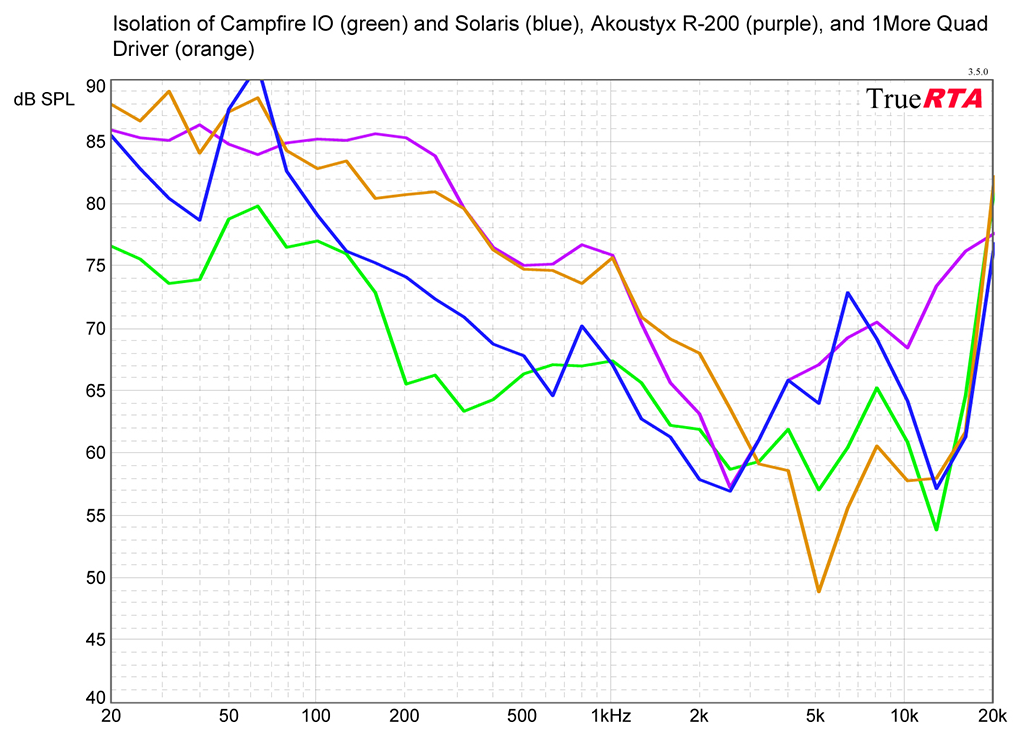 In this chart, the external noise level is 85dB SPL, and numbers below that indicate the degree of attenuation of outside sounds. Isolation of the IOs is excellent, especially considering that I had to use the silicone tips; you’ll likely get even better results with the foam tips, assuming one of the supplied sizes fits you well. 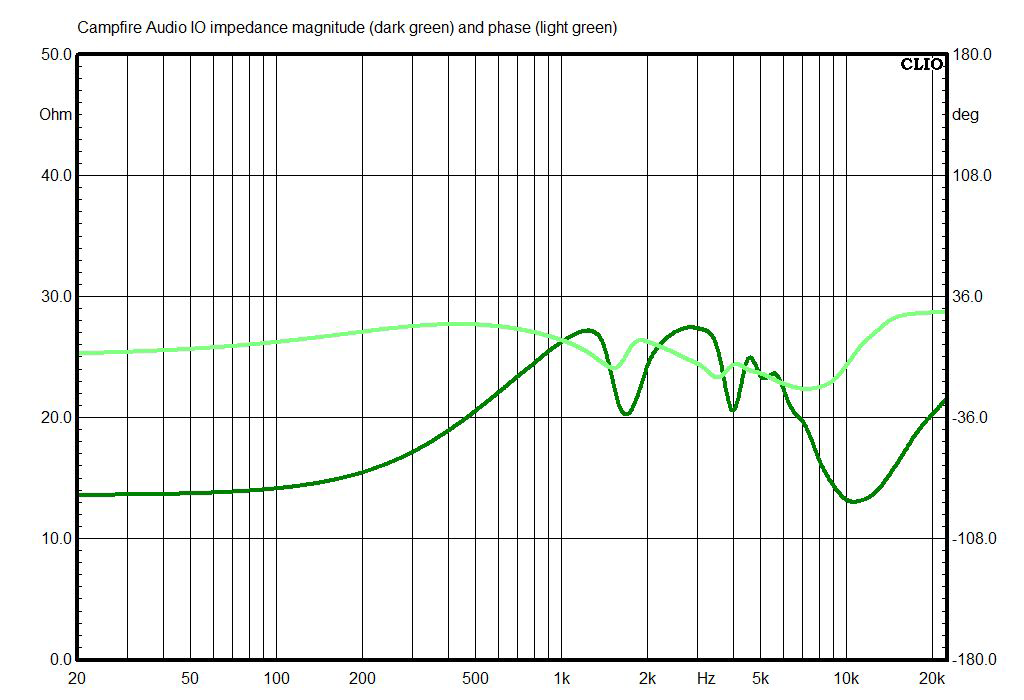 The impedance magnitude of the IO earphones ranges from 13.5 ohms in the bass to 27 ohms in the midrange, with corresponding (but fairly mild) swings in phase. This is why the tonal balance changes when the output impedance of the source device changes.

Sensitivity of the IOs, measured between 300Hz and 3kHz, using a 1mW signal calculated for 26-ohms rated impedance, is 115.7dB, which is exceptionally high, so the IOs will deliver ample volume from any source device.