I measured the Zvox AV50 headphones using a G.R.A.S. Model 43AG ear/cheek simulator/RA0402 ear simulator with the KB5000 and KB5001 anthropomorphic simulated pinnae, a Clio 10 FW audio analyzer, a laptop computer running TrueRTA software with an M-Audio MobilePre USB audio interface, and a Musical Fidelity V-CAN amp. For measurements in Bluetooth mode, I used a MEE Audio Connect Bluetooth transmitter to get the signal to the headphones. These are “flat” measurements; no diffuse-field or free-field compensation curve was employed. 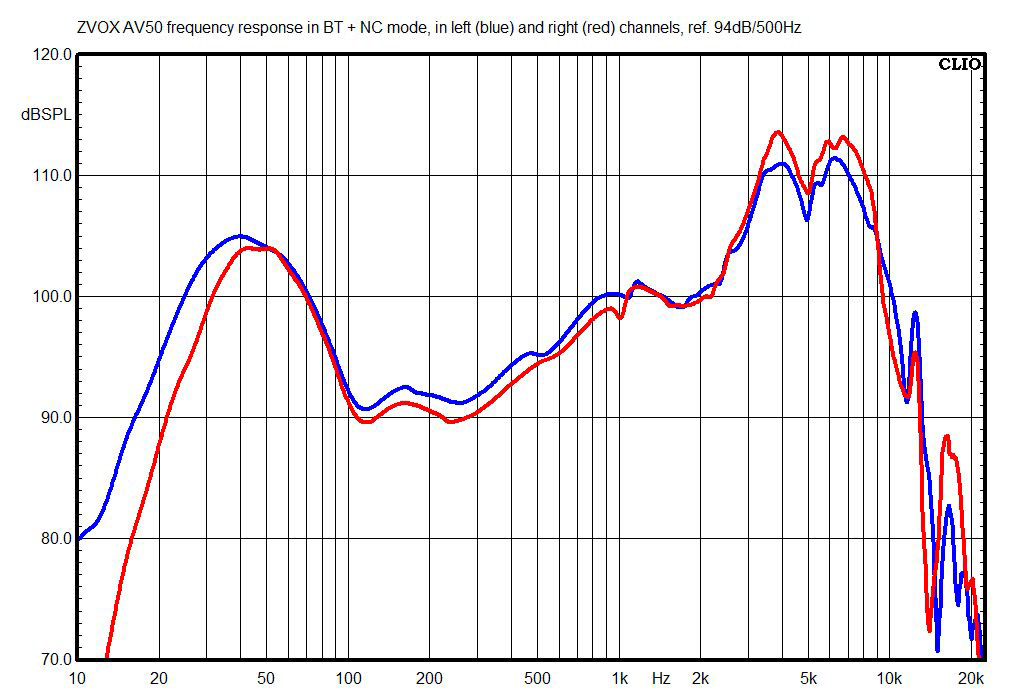 The above chart shows the AV50s’ frequency response measured in what I expect will be their most-used mode: Bluetooth with noise canceling on. This is an unusual response. The large bass bump centered at 40Hz certainly grabs the eye. There’s also none of the usual peak centered at 2 to 3kHz, which is generally considered to make headphones sound more like real speakers in a real room, but there is a strong peak between 4 and 8kHz. 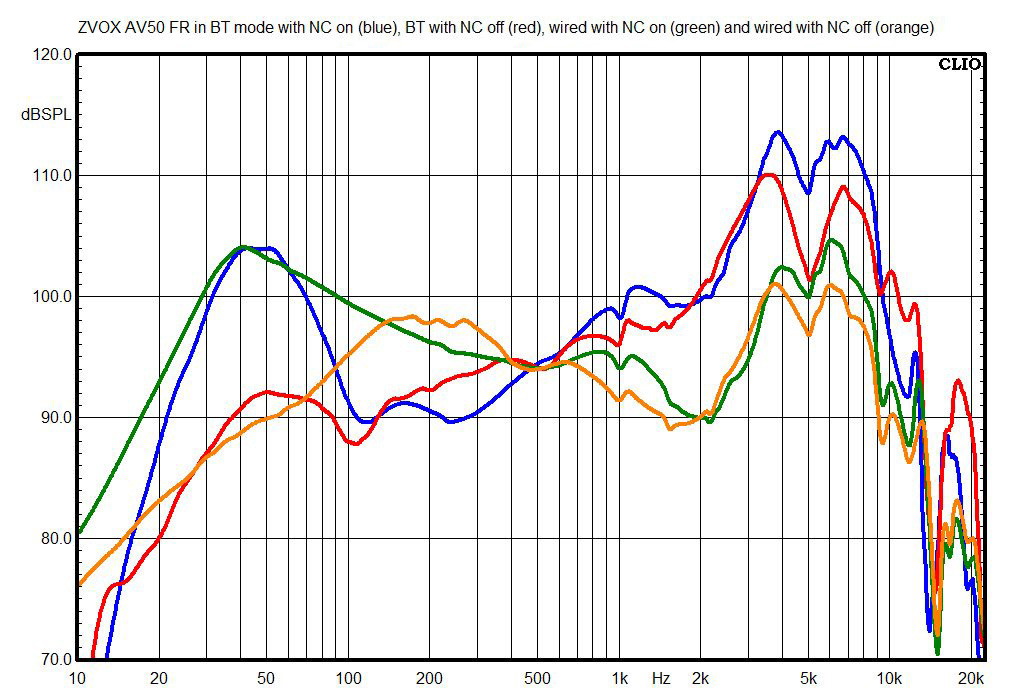 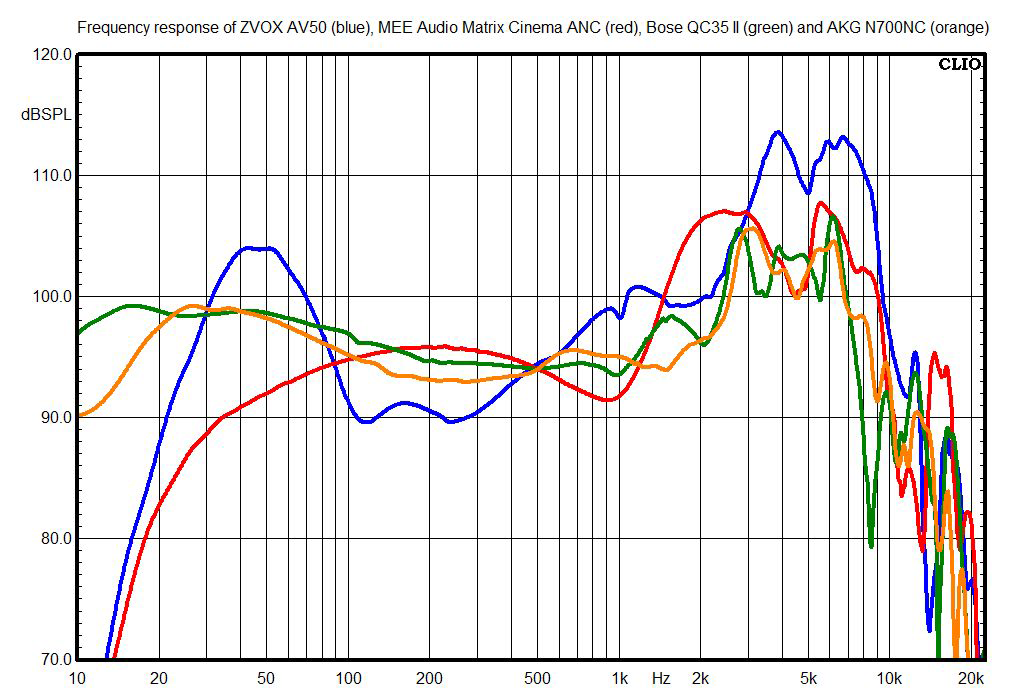 This chart compares the right-channel response from the previous chart with that of several other noise-canceling headphones, all with noise canceling on. These include the MEE Audio Matrix Cinema ANCs (which are the same price as the AV50s), shown in the Clear Voice mode, which is intended to serve the same function as the AV50s’ AccuVoice technology; the Bose QC35 IIs; and the AKG N700NCs, which are the headphones said to be the most faithful to the “Harman curve,” the response that research shows will deliver a sound most listeners prefer. It’s worth noting that the Matrix Cinema ANCs’ Clear Voice mode boosts sound between 2 and 3kHz, while the AV50s’ AccuVoice technology appears to boost sound between 4 and 8kHz. 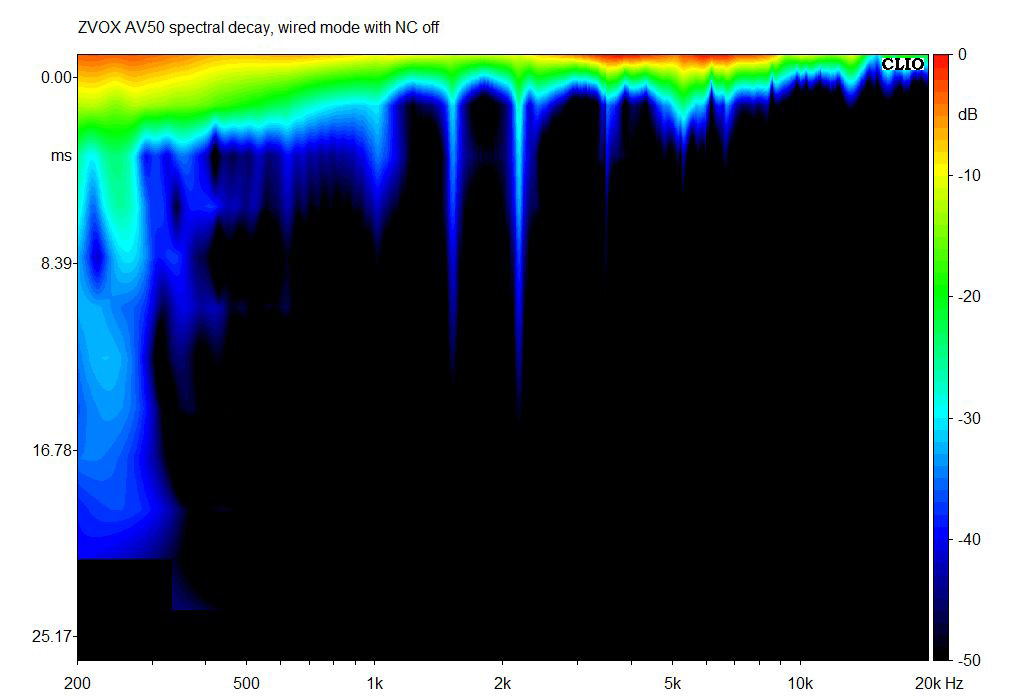 The AV50s’ spectral decay (waterfall) chart -- measured with a wired connection because of Bluetooth’s latency -- shows a mild resonance below 300Hz, and a couple of very high-Q (i.e., narrow) resonances at about 1.5 and 2.2kHz, neither of which is likely to be audible. 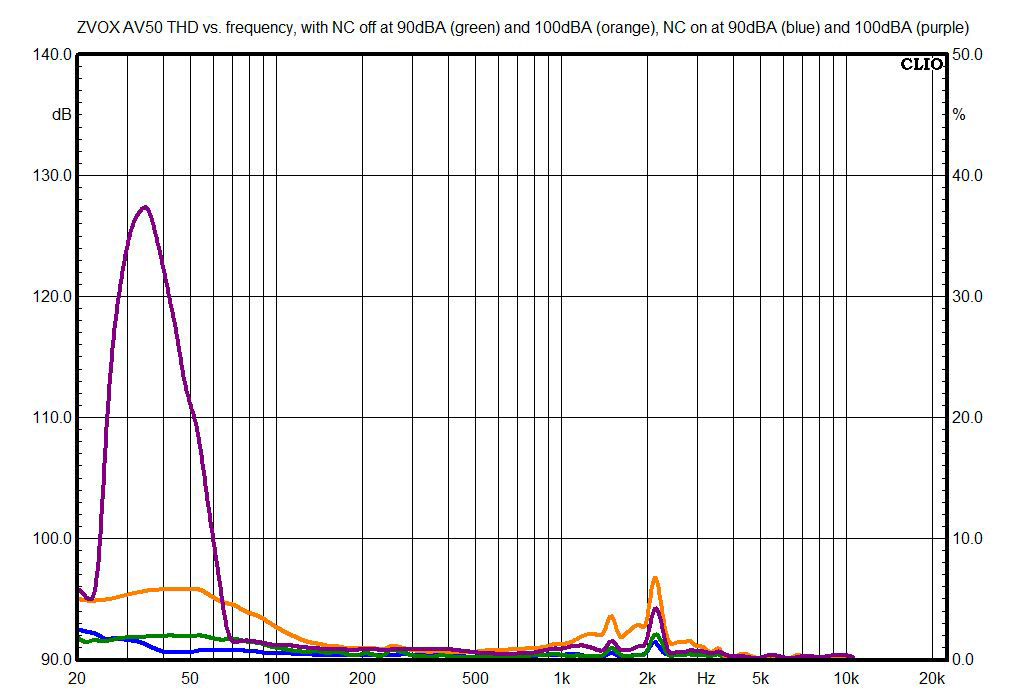 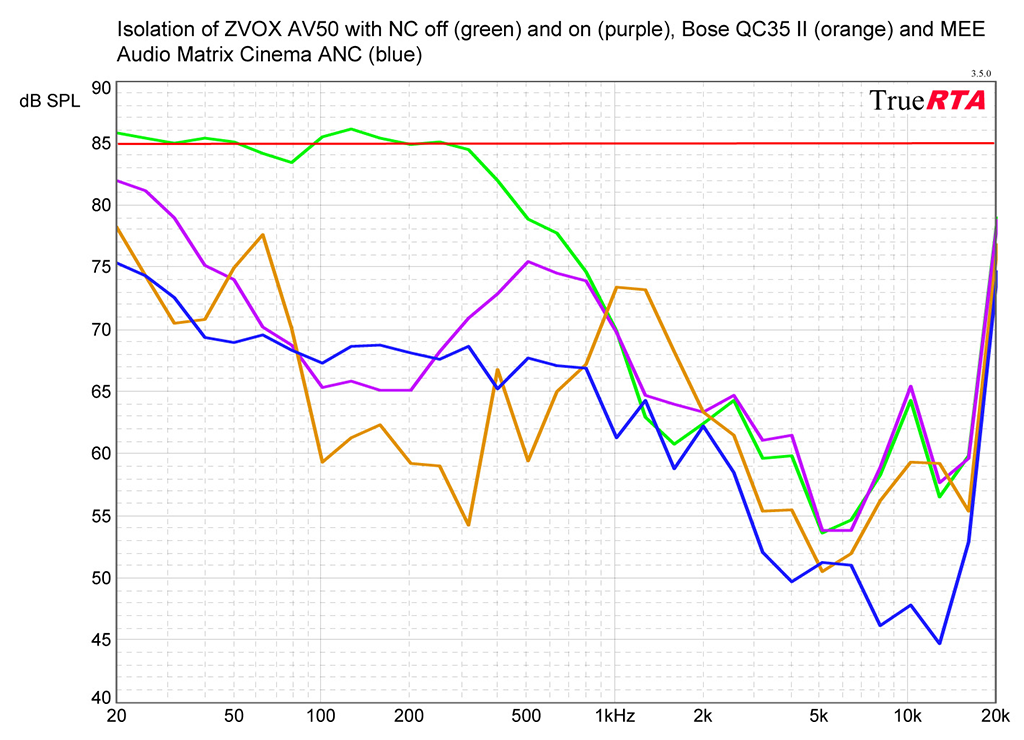 In this chart, the external noise level is 85dB SPL, and numbers below that indicate the degree of attenuation of outside sounds. This is what I consider a useful noise-canceling profile: strongest (-20dB) around 100 to 200Hz, which is where the low-frequency droning of jet engine noise leaking into an airplane cabin resides. There’s a fairly steep filter on the noise canceling circuitry, which you can see in action between 200 and 500Hz, which is why I felt just a slight amount of eardrum suck with these ’phones. Note that the identically priced MEE Audio Matrix Cinema ANC headphones can’t match the AV50s’ performance below 200Hz, but deliver better isolation above that frequency, largely because their passive isolation is better. 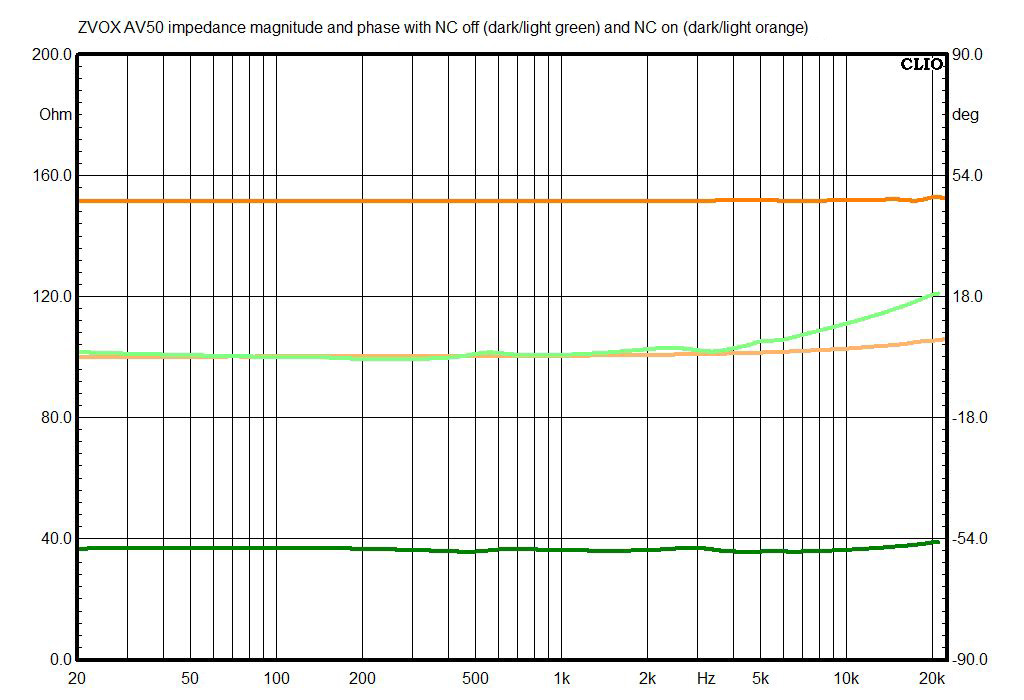 The AV50s’ impedance response in wired mode is basically dead-flat, at 38 ohms with NC off and 152 ohms with NC on, both with essentially flat phase response.

Latency of the AV50s used with the MEE Audio Connect transmitter, with an aptX connection, was 119ms, which is typical for headphones using the aptX codec. Sensitivity of the AV50s with a wired connection, measured between 300Hz and 3kHz using a 1mW signal calculated for 32 ohms impedance (my default for active headphones that have no specified impedance), was 99.4dB with NC off and 99.9dB with NC on. This should be adequate to deliver satisfying volume from most source devices.