I measured the Jade IIs using a G.R.A.S. Model 43AG ear/cheek simulator/RA0402 ear simulator with the KB5000 and KB5001 anthropomorphic simulated pinnae, a Clio 10 FW audio analyzer, and a laptop computer running TrueRTA software with an M-Audio MobilePre USB audio interface. These are “flat” measurements; no diffuse-field or free-field compensation curve was employed. Note that because electrostatic headphones can operate only in conjunction with a dedicated amplifier, I was unable to run my usual sensitivity and impedance tests -- but they’re irrelevant in this case, because you’d probably always use these headphones with this amp. 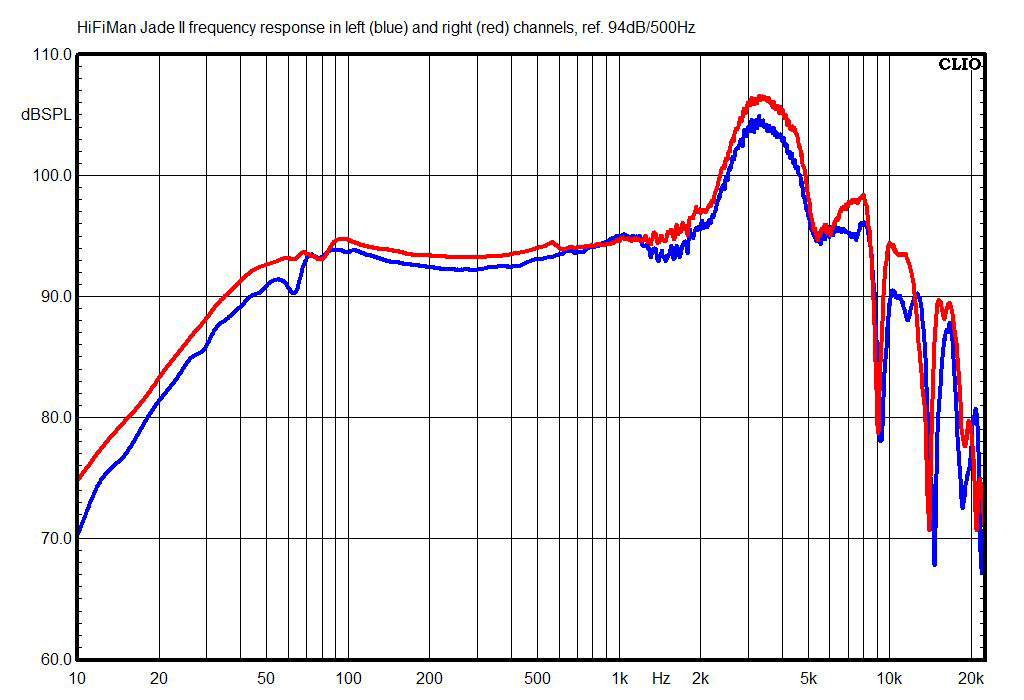 The above chart shows the Jade IIs’ frequency response. It looks typical of what I’ve measured from other planar (in almost all cases, planar magnetic) headphones, except for the Jade IIs’ bass roll-off below 50Hz and extra-potent peak around 3.3kHz. 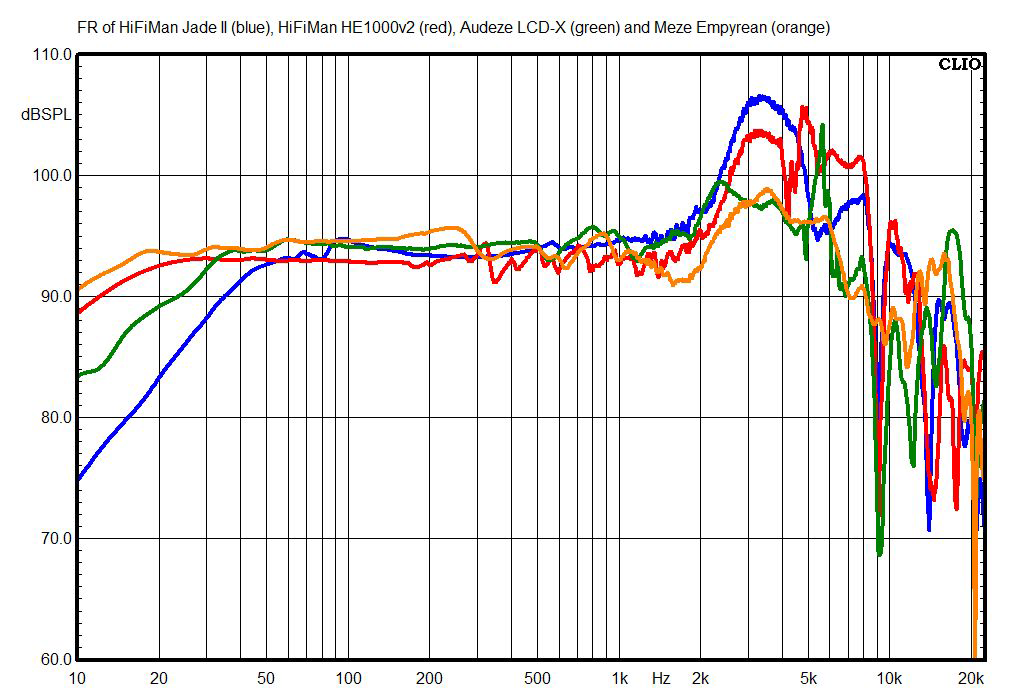 This chart shows the Jade IIs’ right-channel response compared with several high-end planar-magnetic headphones, including the HiFiMan HE1000 V2s, the Audeze LCD-Xes, and the Meze Empyreans. All of the planar-magnetic models have deeper bass extension and a less-pronounced peak in the 3kHz region. 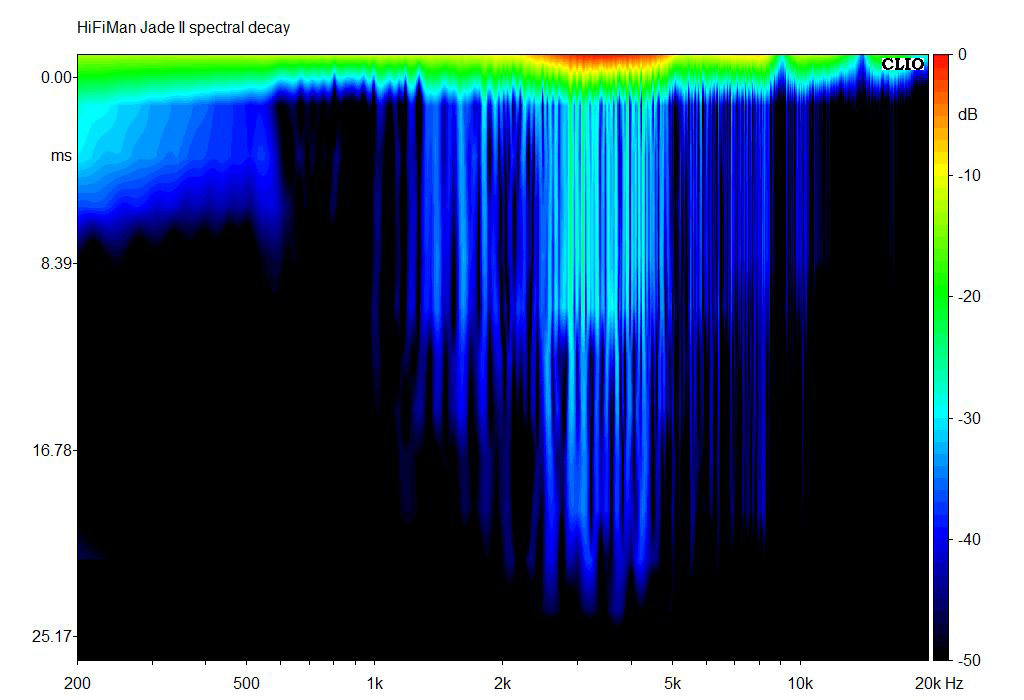 The Jade IIs’ spectral decay (waterfall) chart looks typical of most open-back planar headphones, with lots of very high-Q (i.e., narrow) resonances in the range between 2 and 5kHz, and negligible resonance in the bass. 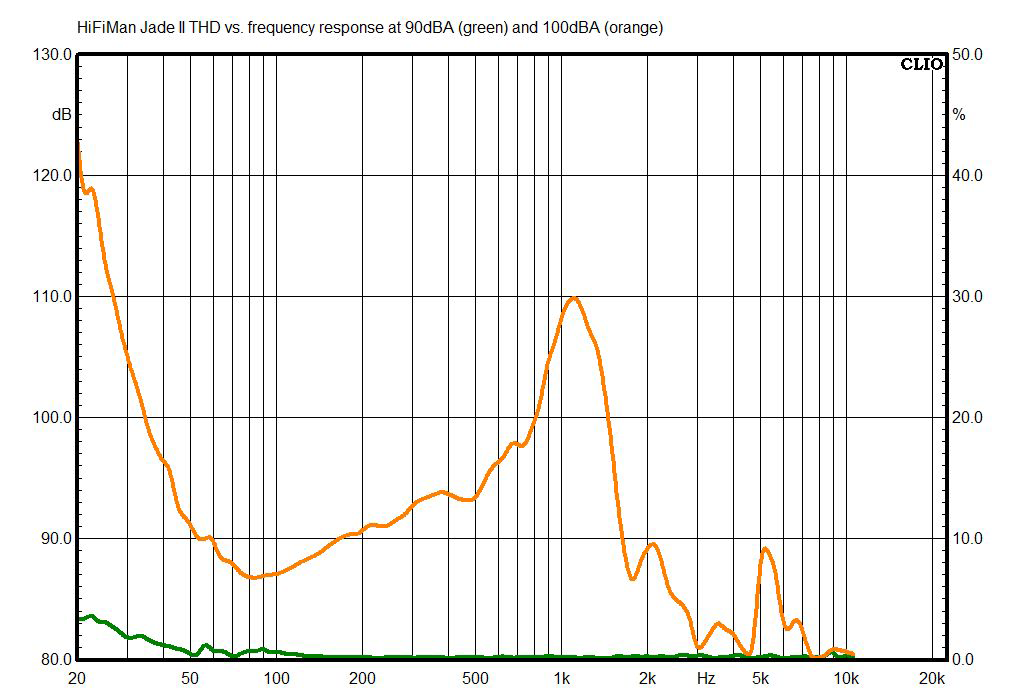 The Jade IIs' distortion is very low at the loud listening level of 90dBA, but unusually high at the extremely loud level of 100dBA. This suggests that the amplifier began clipping; transducers rarely, if ever, show such an abrupt change in distortion behavior. So if you want to crank heavy rock music to extreme levels, these aren’t the headphones for you, but they’ll work for anyone who listens at non-dangerous levels. 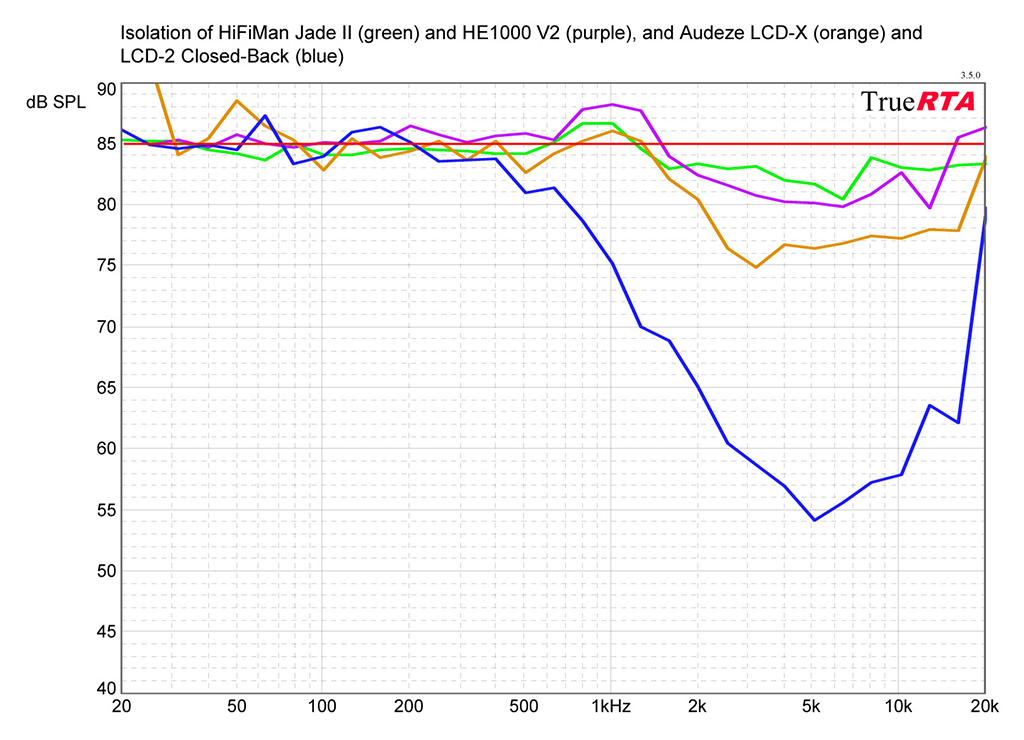 In this chart, the external noise level is 85dB SPL, and numbers below that indicate the degree of attenuation of outside sounds. The Jade IIs’ isolation is among the poorest I’ve measured, but that’s not necessarily a bad thing, because open-back headphones aren’t supposed to isolate the listener from outside sounds, and that lack of isolation suggests a very lightweight (and, presumably, responsive) diaphragm.