I measured the Monoprice 24459 using a Clio 10 FW audio analyzer and a Neutrik NL-1 Minilyzer. I measured only the unbalanced output; for some reason I couldn’t figure out, the amp always went into protection mode when I connected the balanced output into a load resistor. Note that my focus with these tests is on measurements that confirm these devices’ basic functionality. 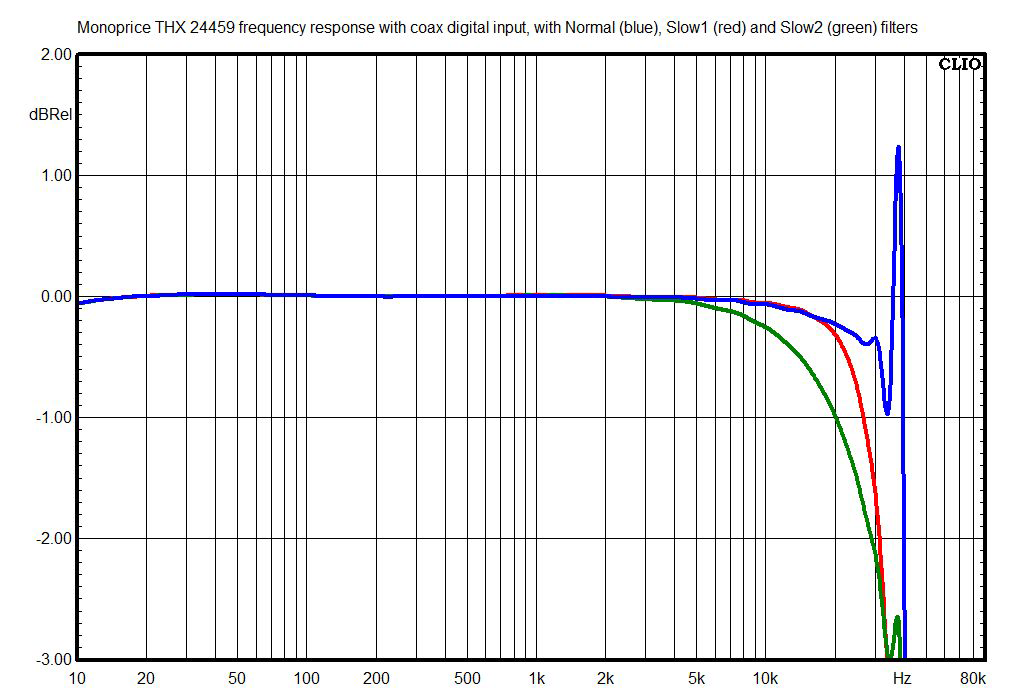 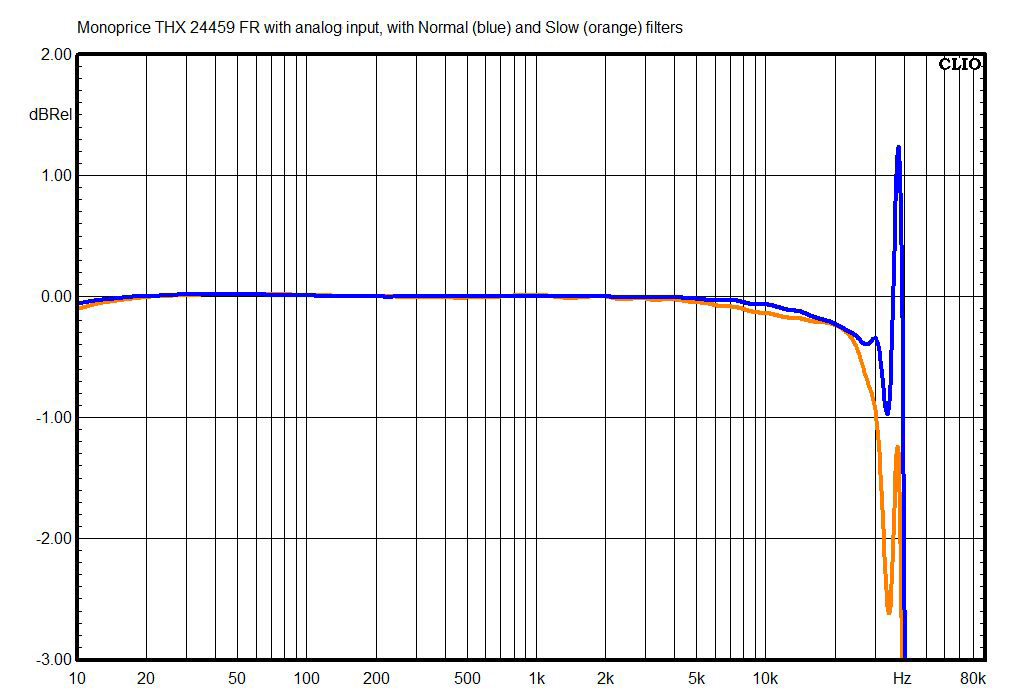 This chart shows the effect of the two different analog-to-digital converter’s filter settings on the frequency response. Both were measured with 1mW output into a 32-ohm load using the unbalanced analog input, with the DAC filter set to Normal. (Measurements with 250- and 600-ohm loads produced effectively identical results.) With the Normal analog-to-digital (ADC) filter, response measured -0.057dB at 20Hz, -0.067dB at 10kHz, and -0.344dB at 30kHz. With the Slow1 filter, the numbers were -0.010dB, -0.139dB, and -0.922dB, respectively. Thus, the difference between the two filters might be just barely audible. (I cite the response here at 10kHz and 30kHz instead of my usual 20kHz and 40kHz because of the slightly non-smooth characteristics of the response curves.) 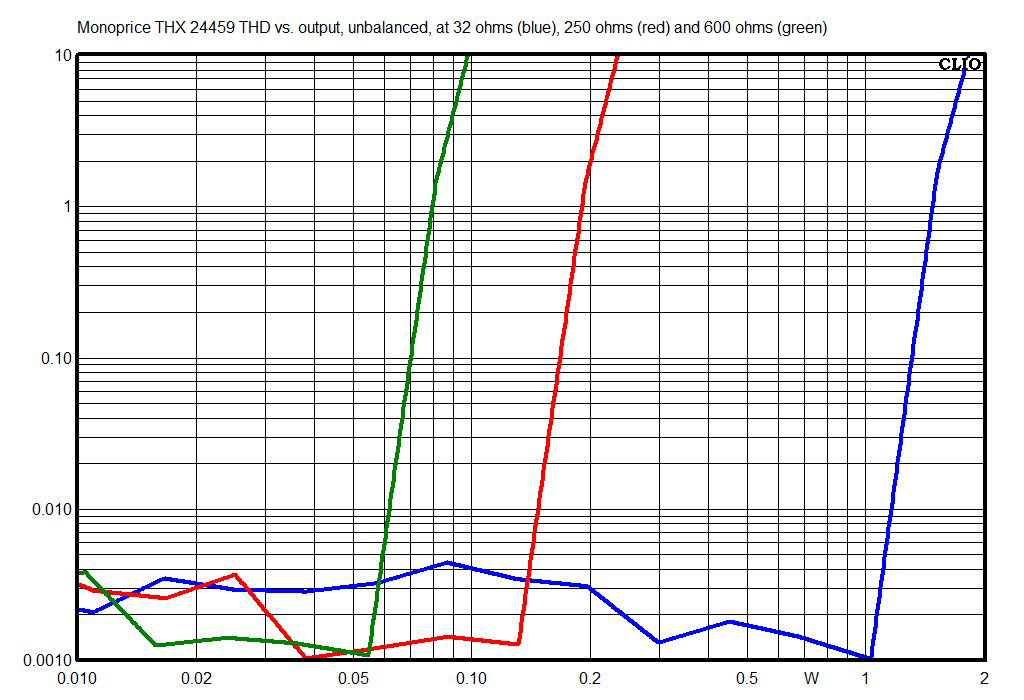 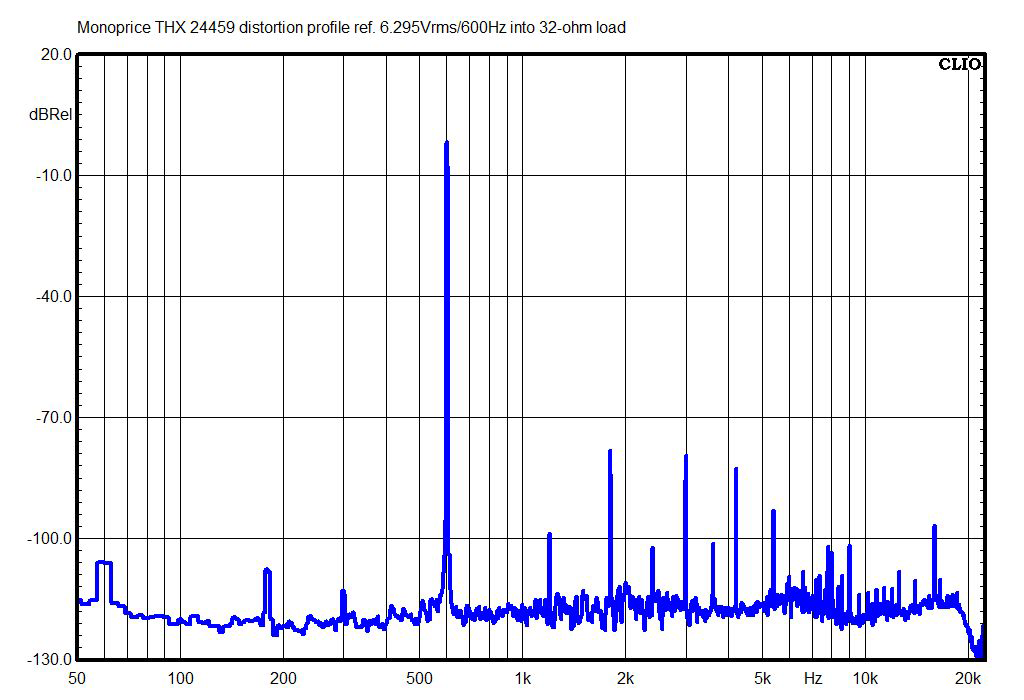 Here you can see the harmonic distortion spectrum and noise floor of the Monolith 24459, referenced to 6.295Vrms (1.24W) output at 600Hz into 32 ohms. (I used this odd output number as a reference because, as best I can tell, the amplifier stage just barely starts to distort before the unit’s analog-to-digital converter stage clips. Any higher and the distortion becomes very high; any lower and there’s not enough distortion to see the harmonic content.) Harmonic distortion is predominantly odd-order, which is much more audible than even-order distortion, but with the 3rd harmonic at -78.2dBFS and the 5th harmonic at -79.4dBFS (both just slightly over 0.01% distortion), and the distortion occurring only at an extremely high output level, I think the chances of any listener actually hearing this are zero. Note also that the noise floor was generally at about -120dBFS. This is excellent performance.