I measured the E1026BT-I 1More Stylish True Wireless earphones using laboratory-grade equipment: a G.R.A.S. Model 43AG ear/cheek simulator/RA0402 ear simulator with KB5000/KB5001 simulated pinnae, and a Clio 10 FW audio analyzer. For isolation measurements, I used a laptop computer running TrueRTA software with an M-Audio MobilePre USB audio interface. A MEE Audio Connect Bluetooth transmitter was used to send signals from the Clio 10 FW to the earphones. These are “flat” measurements; no diffuse-field or free-field compensation curve was employed. Note that because of the latency introduced by Bluetooth, I wasn’t able to do a spectral decay measurement, and of course my usual impedance and sensitivity measurements are irrelevant for wireless earphones. If you’d like to learn more about what our measurements mean, click here. 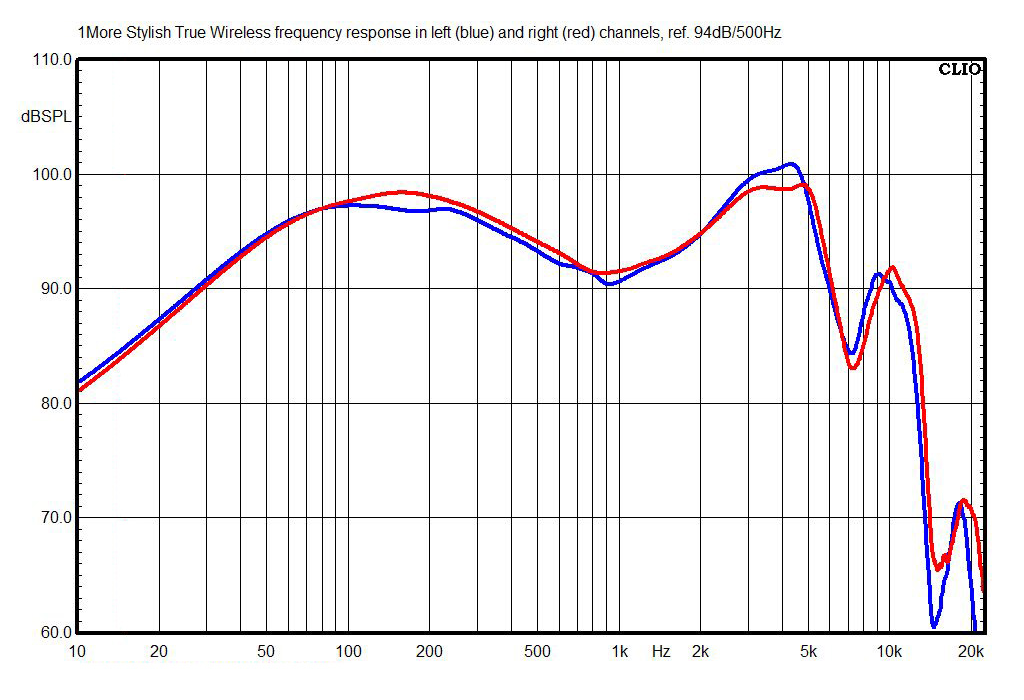 The above chart shows the E1026BT-Is’ frequency response measured with the KB5000 and KB5001 anthropomorphic simulated pinnae. This is a fairly normal result for earphones, although we might typically see the traces moved further to the left -- i.e., the bass bump centered closer to 100Hz, and the two treble peaks shifted down by about 1kHz. One note: the latency (which is seen in the impulse measurement used to calculate the frequency response) of these earphones with the MEE Connect is 319ms, the longest I can remember measuring from Bluetooth headphones or earphones. That’s no problem if you’re listening to audio-only material, but it’ll create lip-sync problems with video content and likely make playing certain games feel a little weird. 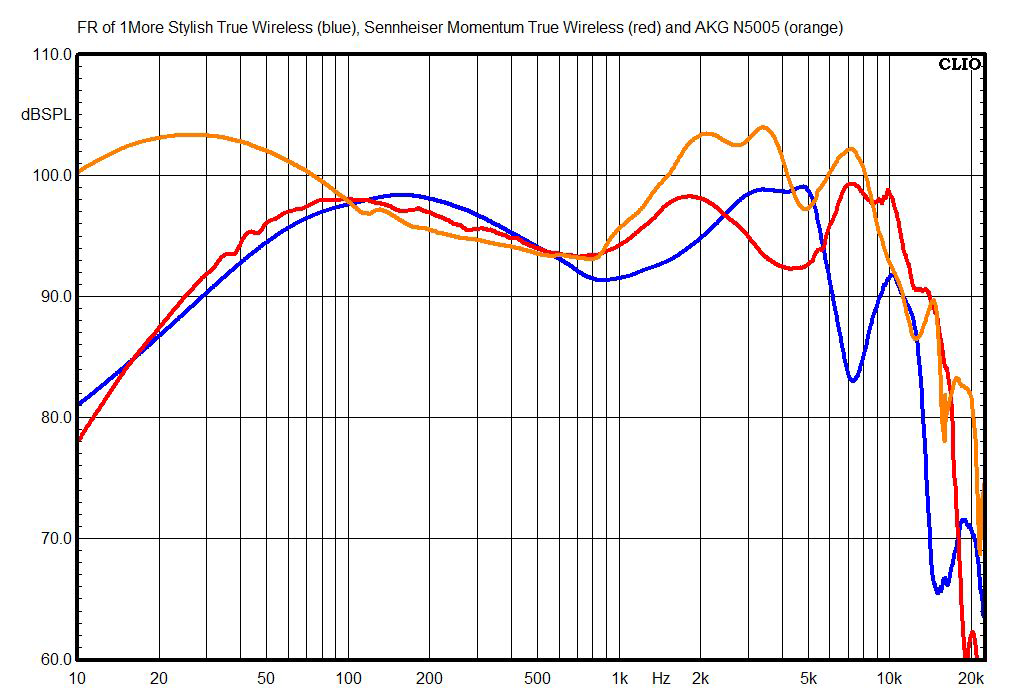 This chart shows the E1026BT-Is’ right-channel response compared with the Sennheiser Momentum True Wirelesses and the AKG N5005s (the N5005s are the earphones that currently best conform to the “Harman curve,” shown in research by Harman International to be the preferred in-ear headphone response for most listeners). 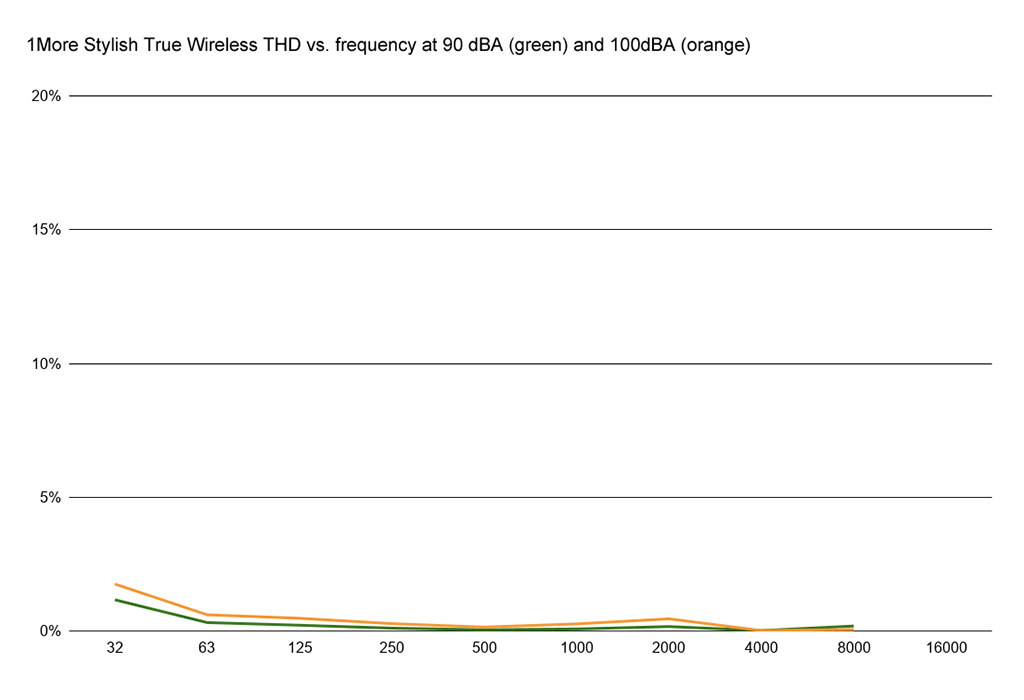 Because of the latency of the Bluetooth connection, I had to measure distortion the old-fashioned way, with discrete tones instead of a sweep. This chart shows distortion plotted at one-octave intervals. Even though this method is more demanding because the single tone is played continuously at a high level for several seconds per measurement, thus encouraging heat buildup in the driver’s voice coil and the amp, the E1026BT-Is’ distortion remains very low, staying under 2% even at the low frequency of 32Hz and the extremely high level of 100dBA. 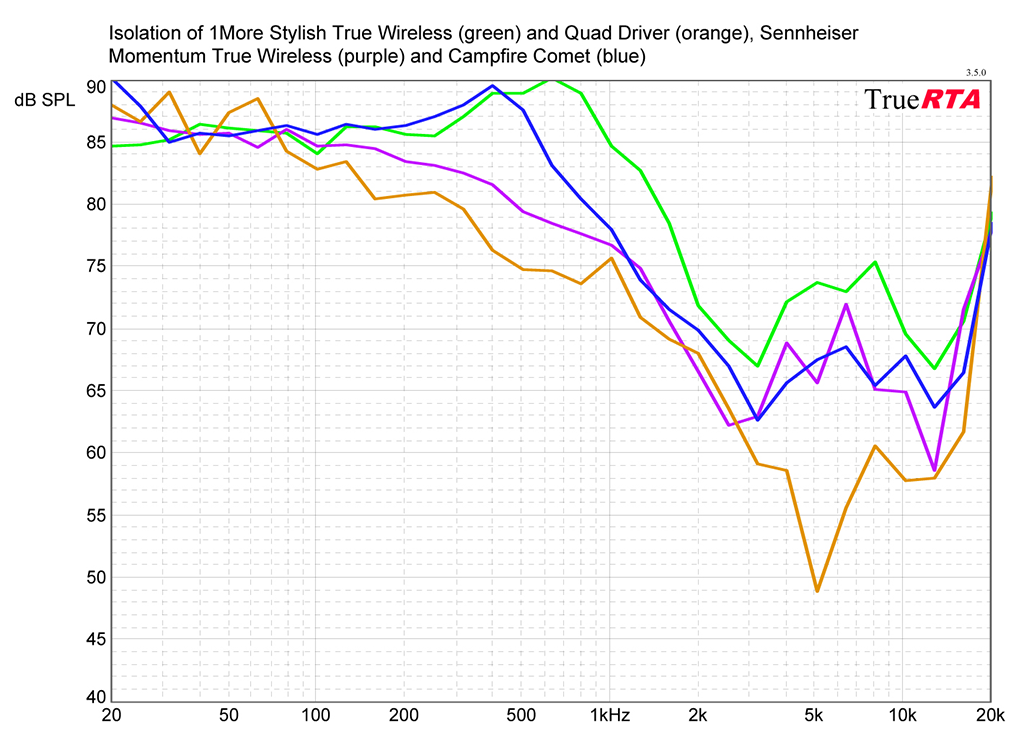 In this chart, the red line indicates an external noise level of 85dB SPL, and numbers below that indicate the degree of attenuation of outside sounds. The E1026BT-I Stylish True Wirelesses’ isolation is the least of all the earphones included here, probably because they don’t fit as deep in the ear canal as typical passive earphones such as the 1More Quad Drivers and Campfire Comets do, and they’re not as bulky as the Sennheiser Momentum True Wirelesses.